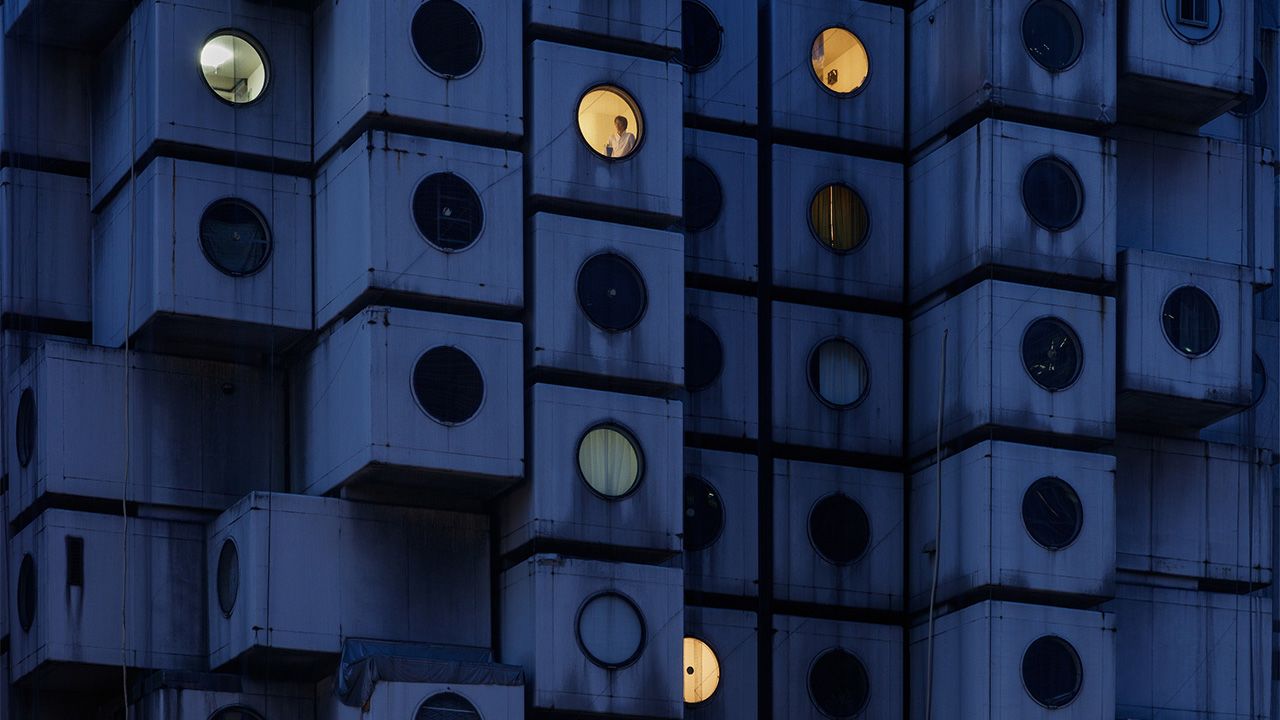 Architecture Nov 4, 2021
In postwar Japan, as the country shifted gears from reconstruction to enter a period of accelerated economic growth, numerous unique buildings were constructed based on the revolutionary ideas of young architects. One of these was Metabolism, an architectural movement in the 1960s and 1970s that sought to imagine a new Japanese urbanism. The most famous example of Metabolism is Kurokawa Kishō’s Nakagin Capsule Tower, built in 1972. Now, almost half a century later, faced with deterioration and population decline, many of the buildings are on the verge of disappearing. French photographer Jérémie Souteyrat documented the lives of these structures in the context of their surroundings.

Much of Japan was left devastated by World War II. The country set to work rebuilding during the first decade after the war, changing lanes as it entered a period of high economic growth that continued from the late 1950s until the 1973 oil crisis. During those years, a new generation of architects emerged who played an important role in urban development by creating many building projects that anticipated a utopian future.

With guidance from Tange Kenzō (1913–2005), this group of young architects designed buildings and other giant structures, launching the Metabolism movement that incorporated the biological principle of regeneration. The group went on to produce world leaders in the field of architecture. Former members, Maki Fumihiko (1928– ) and Isozaki Arata (1931– ), each received the revered Pritzker Architecture Prize, in 1993 and 2019 respectively.

This article looks at various projects that emerged from this experimental movement. One building epitomizing Metabolism is the Nakagin Capsule Tower in Tokyo’s Ginza district. It is close to popular tourist attractions and in a location that makes it easy for the media to cover, which has aided its longevity. But owing to its deterioration, the owners have bowed to pressure to rebuild. 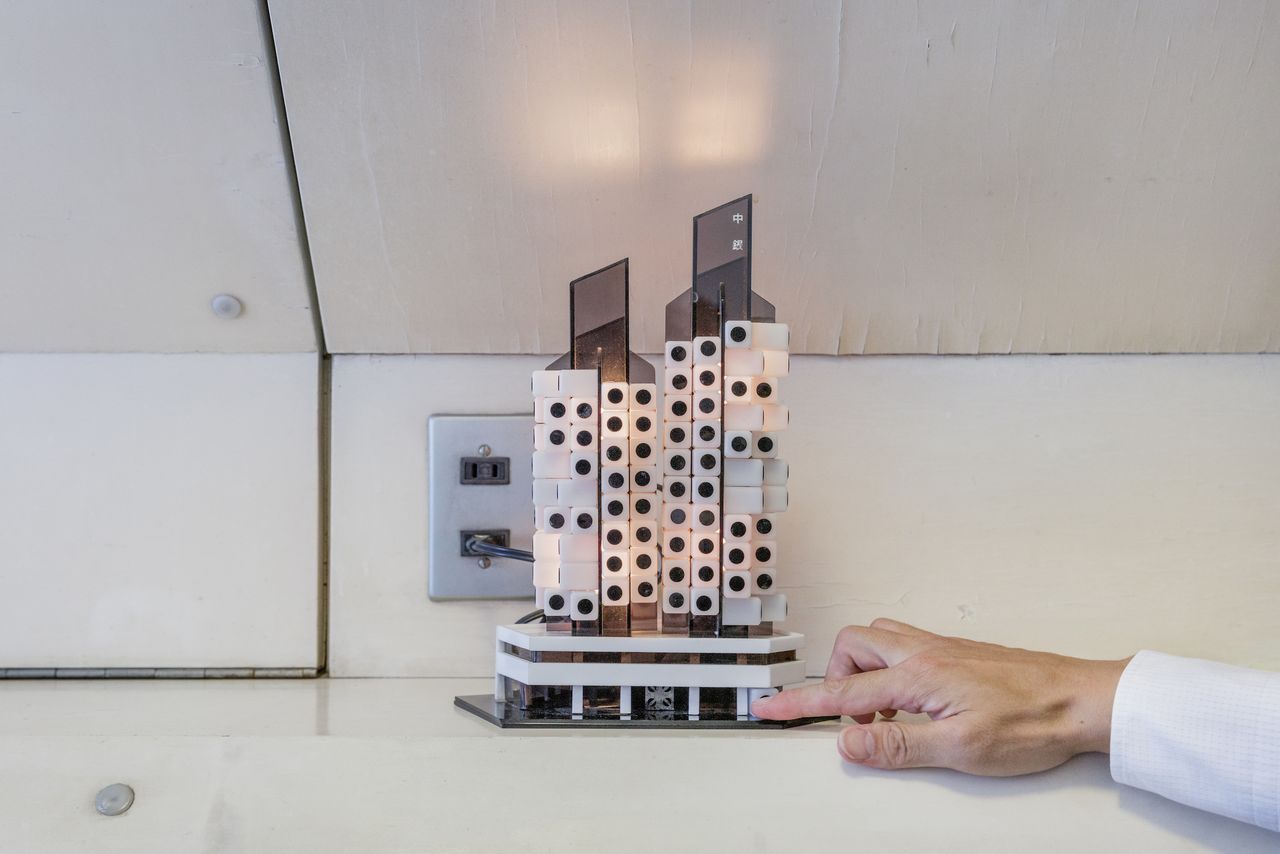 A model of the Nakagin Capsule Tower on display in a room owned by Sekine Takayuki within the building. Designed by Kurokawa Kishō and built in 1972, the tower is one of the few structures from the Metabolism movement that remains standing in 2021. Photographed on July 23, 2016.

Most privately owned examples of Metabolism built in that era have already been pulled down due to the excessive costs to maintain them as they progressively deteriorate. The number of public buildings that were constructed have also diminished as Japan’s population has declined. I began working on my project to document Metabolism architecture in 2016, and already some of the buildings I photographed have been demolished. The remainder will almost certainly disappear before long.

The Metabolism movement, despite being future-oriented, was based on the concept that destruction of the old allows for construction of the new in a cycle of renewal, an idea similar to ancient Shintō traditions.

The photos which accompany this article of remaining Metabolism structures from across Japan strive to capture their final form in the context of their surroundings. The photographs were selected from my recent monograph, L’architecture du futur au japon: utopie et metabolisme (Architecture of the Future in Japan: Utopia and Metabolism), released by French publisher Le Lézard Noir in November 2020.

The movement originated when a group of young Japanese architects and designers produced a manifesto entitled “Metabolism: The Proposals for New Urbanism” for the World Design Conference, held in Tokyo in 1960. The group included architects Kurokawa Kishō, Kikutake Kiyonori, Maki Fumihiko, and Ōtaka Masato together with designers Ekuan Kenji and Awazu Kiyoshi and art critic Kawazoe Noboru. It proclaimed a concept of organic growth for cities and buildings in response to social development and population increase, modeled on biological cell-metabolism. Their creations are renowned worldwide as preeminent non-Western architecture.

The apartment building contains 140 “capsules” each measuring 10 square meters. At the time of its construction, it was touted as a businessman’s “hideaway” and marketed through department stores. Capsule owner Sekine Takayuki, who purchased one unit with his wife in 2005 for ¥4 million, has been closely involved in efforts to preserve and renew the building.

In 2007, capsule owners voted to replace the tower, but the investment company heading the project later declared bankruptcy. Subsequently, some owners took to buying other capsules and engaged in actions aimed at preservation and renewal. However, in spring 2021, the building was sold to a real estate company that plans to redevelop the site. Demolition is now scheduled to begin in March 2022. 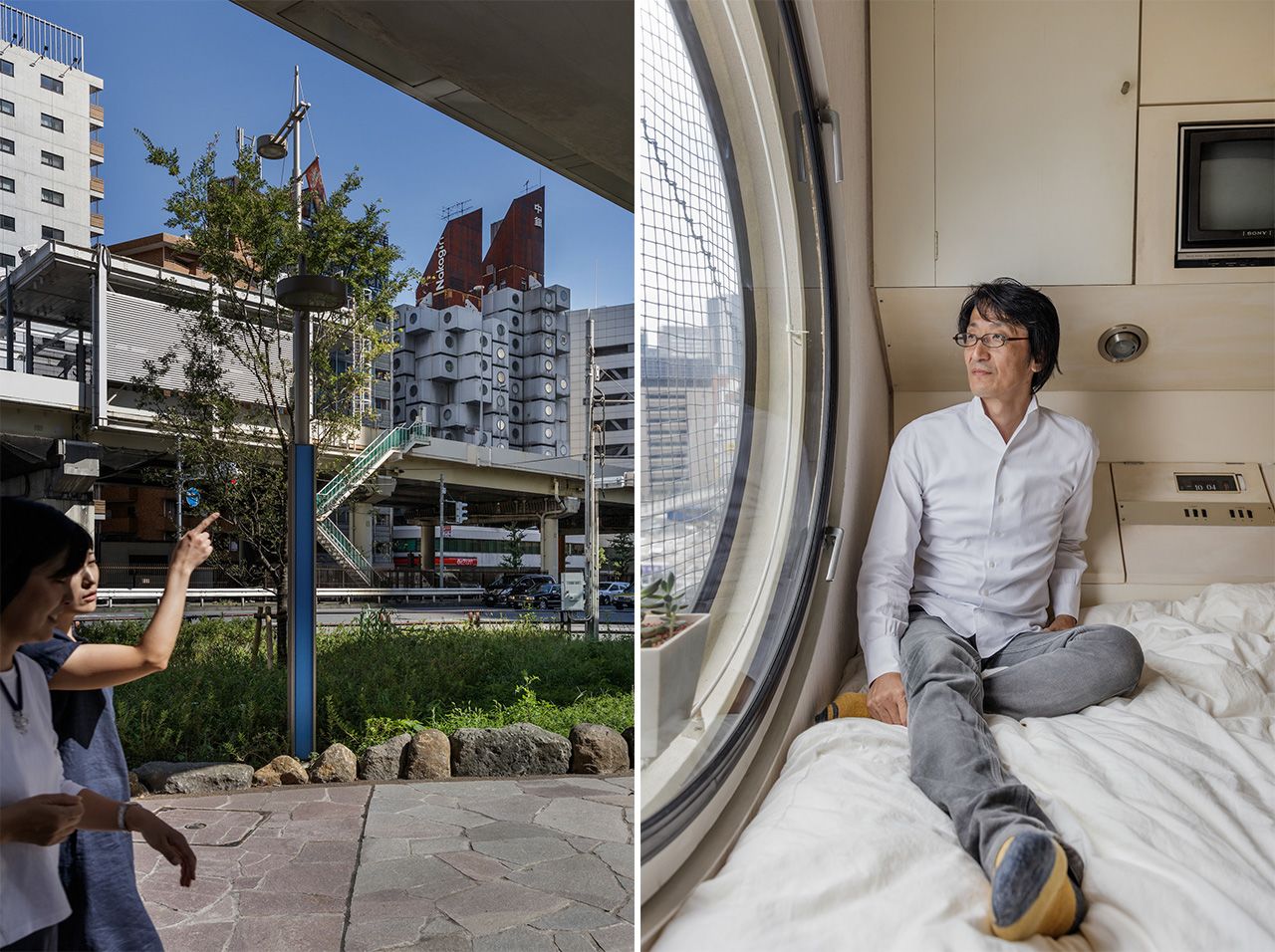 This was the first national conference facility built in Japan and was the site of the signing of the Kyoto Protocol in 1997. The complex is housed on a sprawling grounds measuring 156,000 square meters and sets adjacent to the Takaragaike Pond and gardens. The roof incorporates traditional gasshō-style construction into modern architecture. The main building was completed in 1966. Later additions include the event hall (1985) and annex hall (1998). All were designed by Ōtani Sachio and Ōtani Associates. 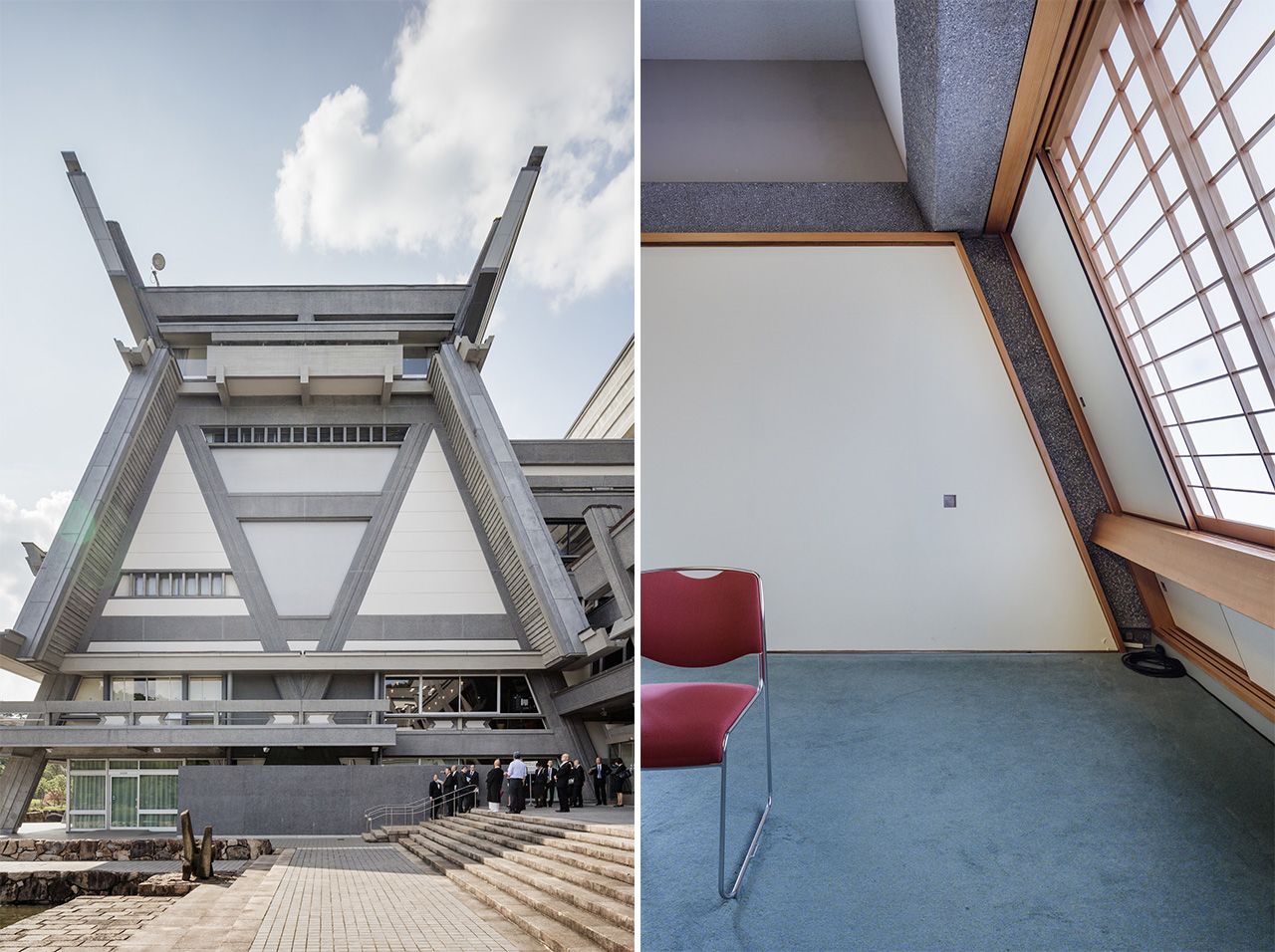 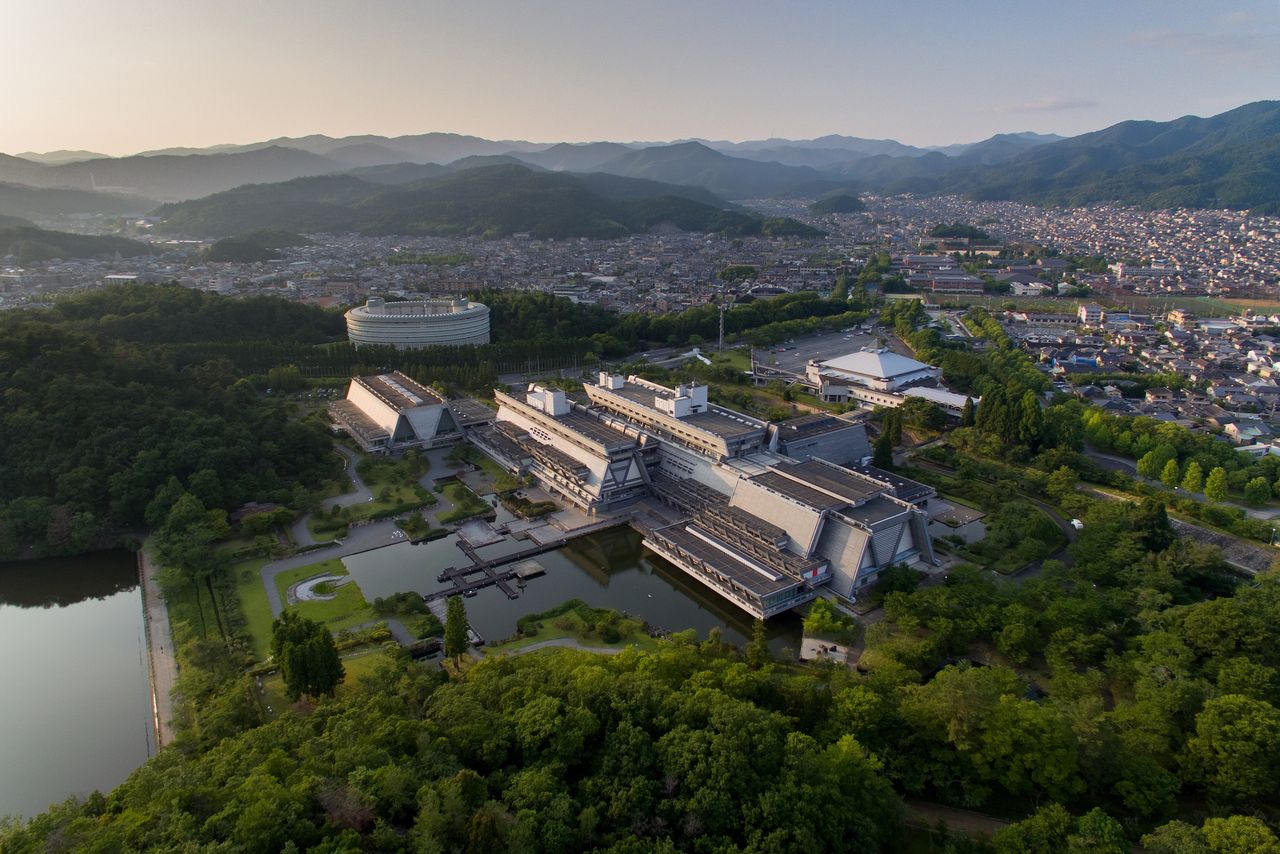 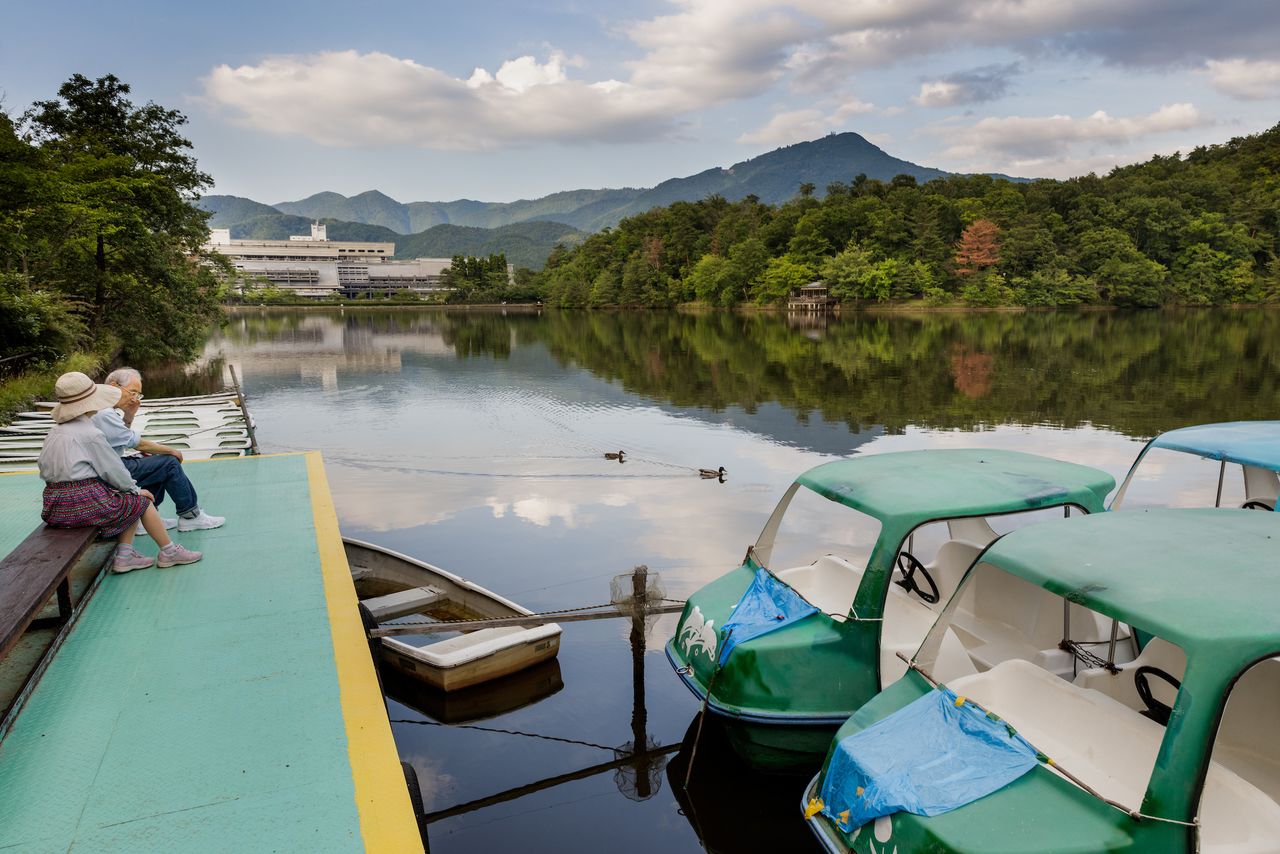 The hall houses the offices of local media groups Yamanashi Nichinichi Shimbun, Yamanashi Broadcasting System, and the Sannichi YBS Group. The roof features a prominent radio tower dating back to the era of analog broadcasting. The structure is supported by columns and beams, whereby there is no need for internal walls, allowing for flexible use of the interior space. The building was later renovated, increasing the floorspace from the original 18,000 to 21,900 square meters, proving the value of the Metabolism concept. 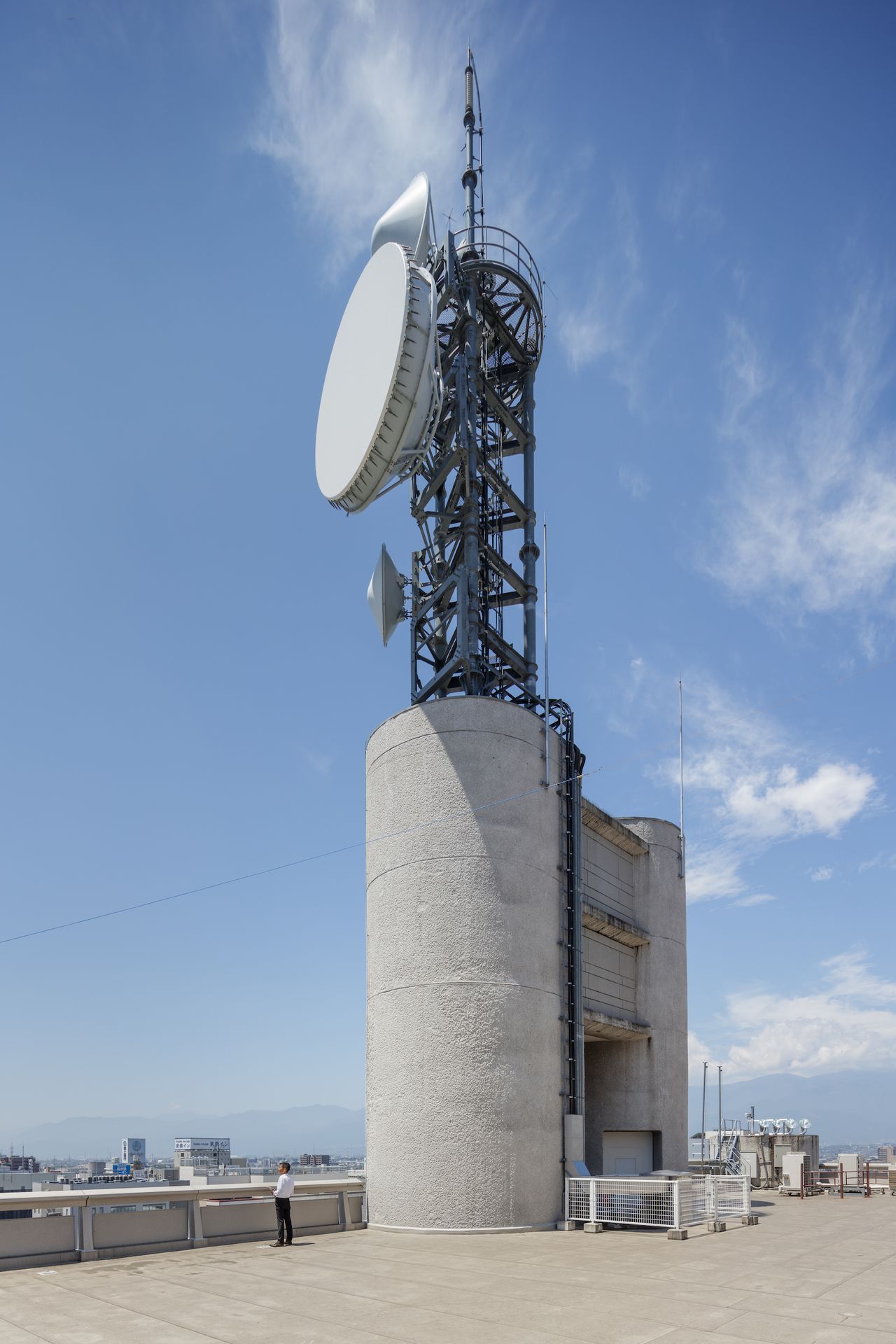 This accommodation facility is in the renowned hot spring resort of Kaike Onsen on the Japan Sea coast. Tōkōen was constructed as a modern addition to an existing inn. The upper floor accommodation sits atop six giant main pillars, and is evocative of a Shintō shrine’s shinden (deity hall). Each of the main pillars is supported by bracing columns and beams, whereby the reinforced concrete structure realizes an appearance of traditional wooden construction. The designer, Kikutake Kiyonori, was a founding member of the Metabolism movement. 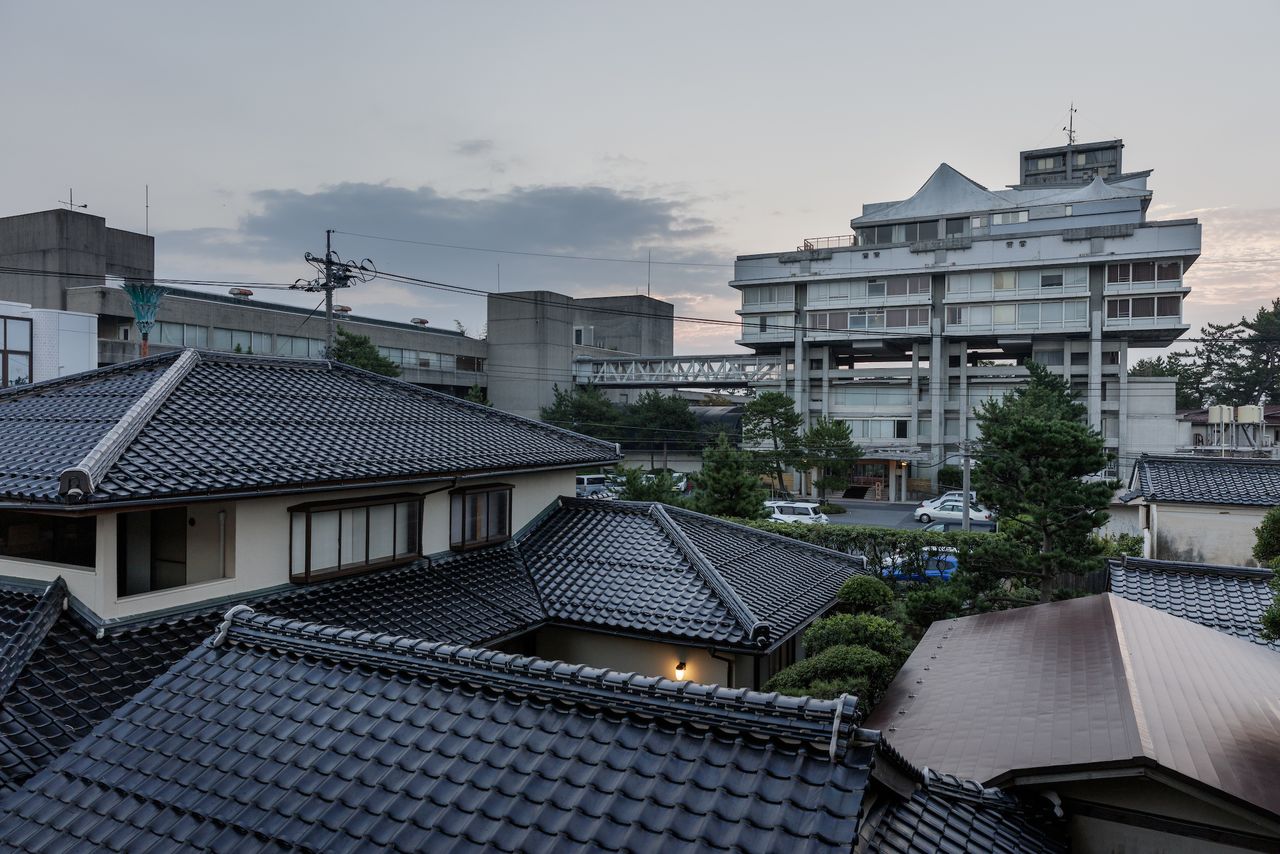 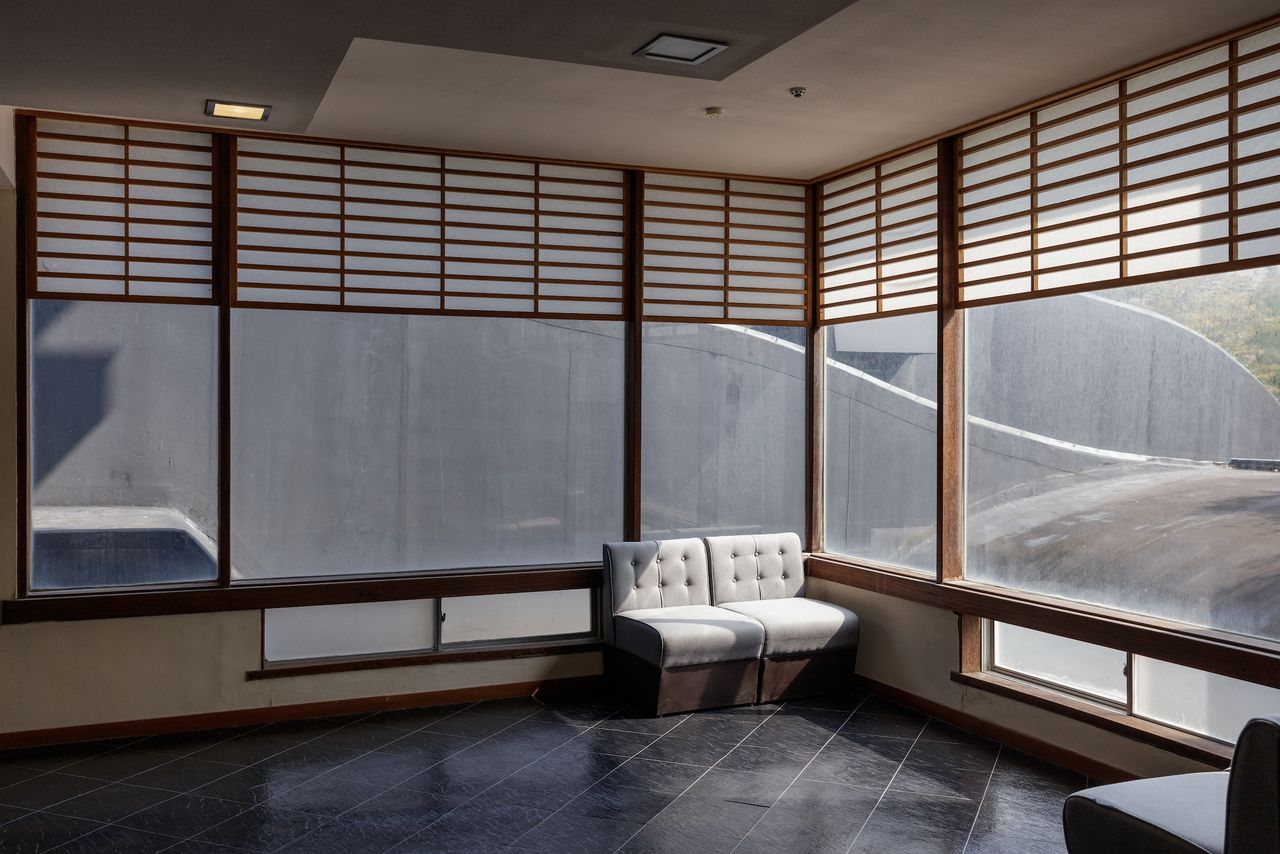 This building housed administrative offices for Izumo Shrine, replacing the previous wooden structure, which burned down in 1953. The structure incorporated the motif of the racks used by Izumo farmers for drying rice sheaves after harvest. The magnificent building had two enormous pillars linked by a forty-meter long crossbeam. While it incorporated modern construction methods using reinforced concrete to ensure fire-resistance, it was designed to harmonize with its ancient, hallowed setting. Regrettably, the building was demolished in November 2016. 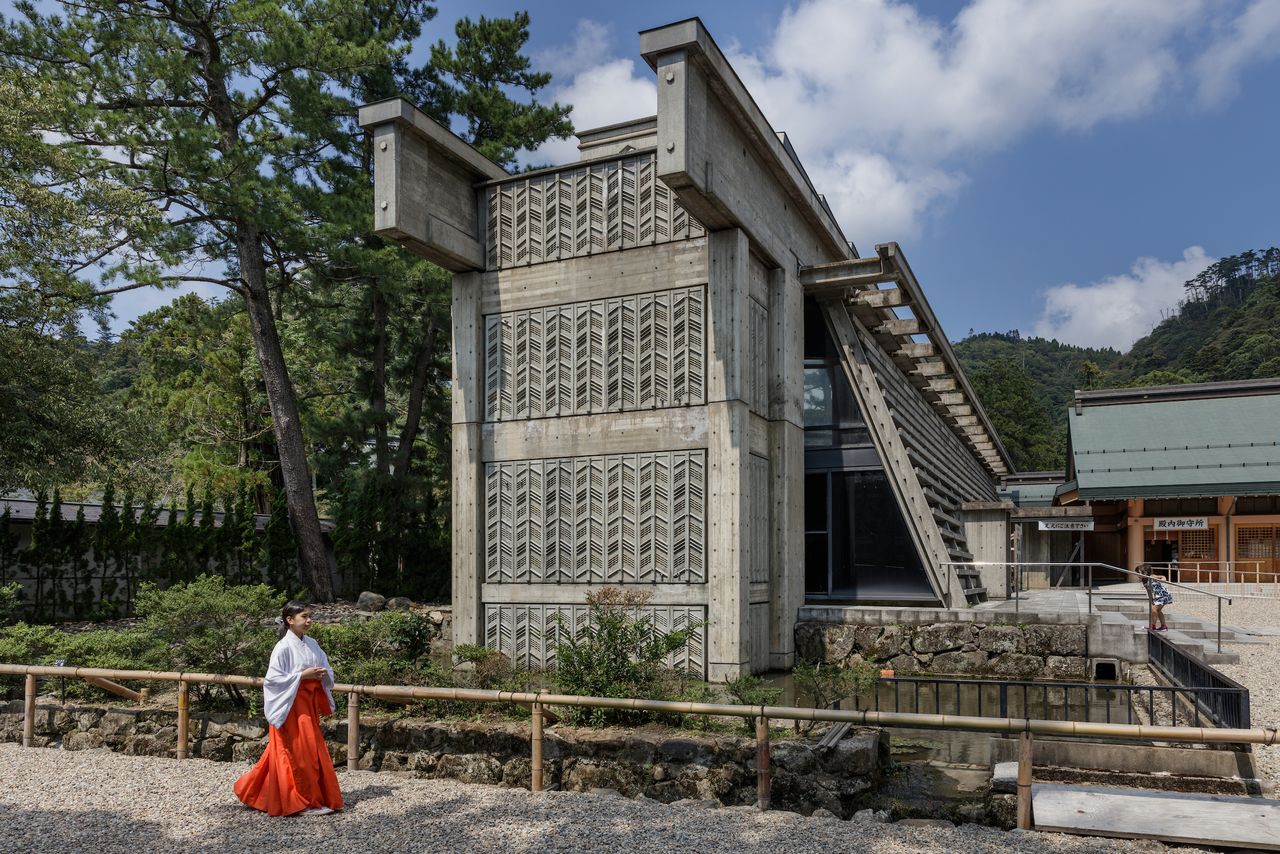 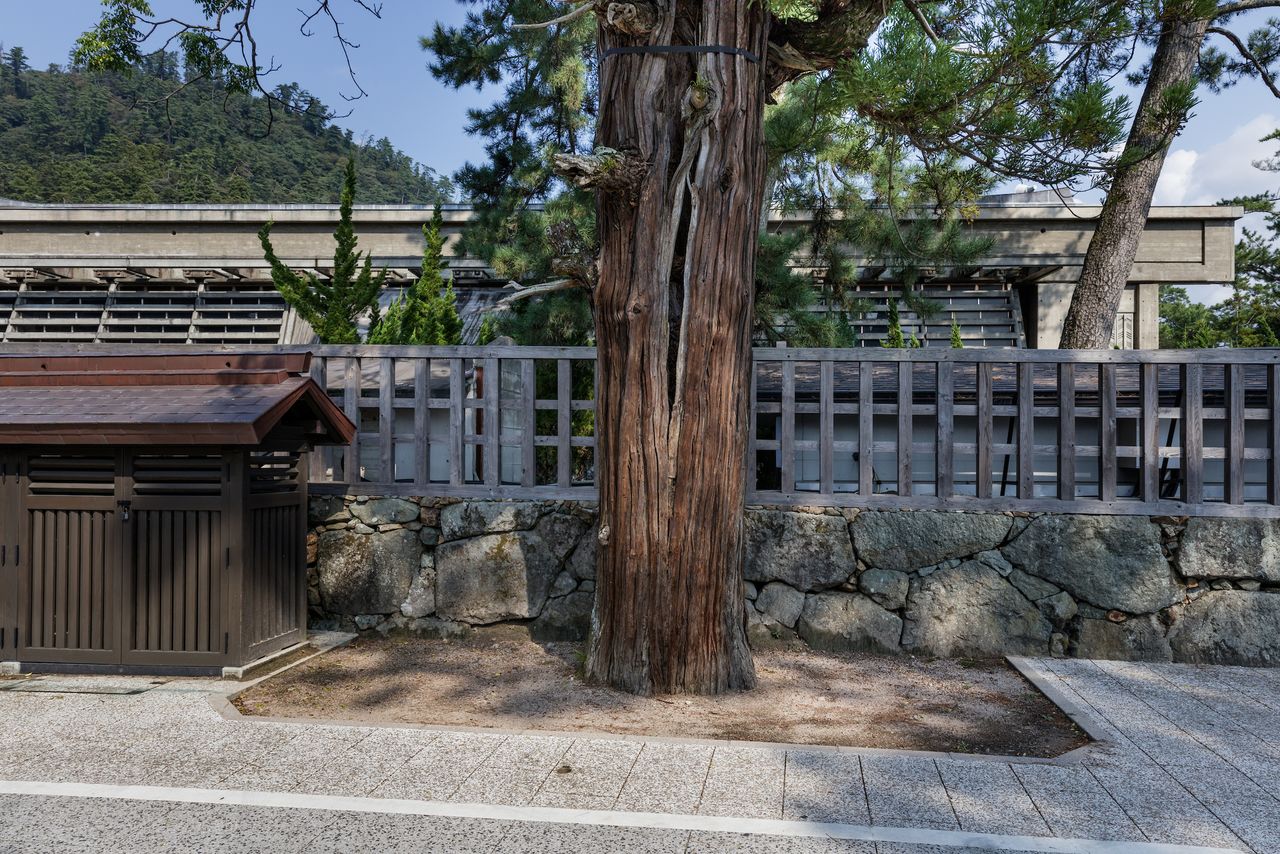 The office building, situated at the Iikura intersection near Tokyo Tower, is known for its signature black oval-shaped tower. It is home to numerous corporate offices and the Embassy of Fiji. Its architect, Shirai Seiichi, studied philosophy and Gothic architecture in Berlin before World War II. The design is a philosophical expression of the interplay between light and darkness. The photograph is a view of the entrance foyer ceiling. 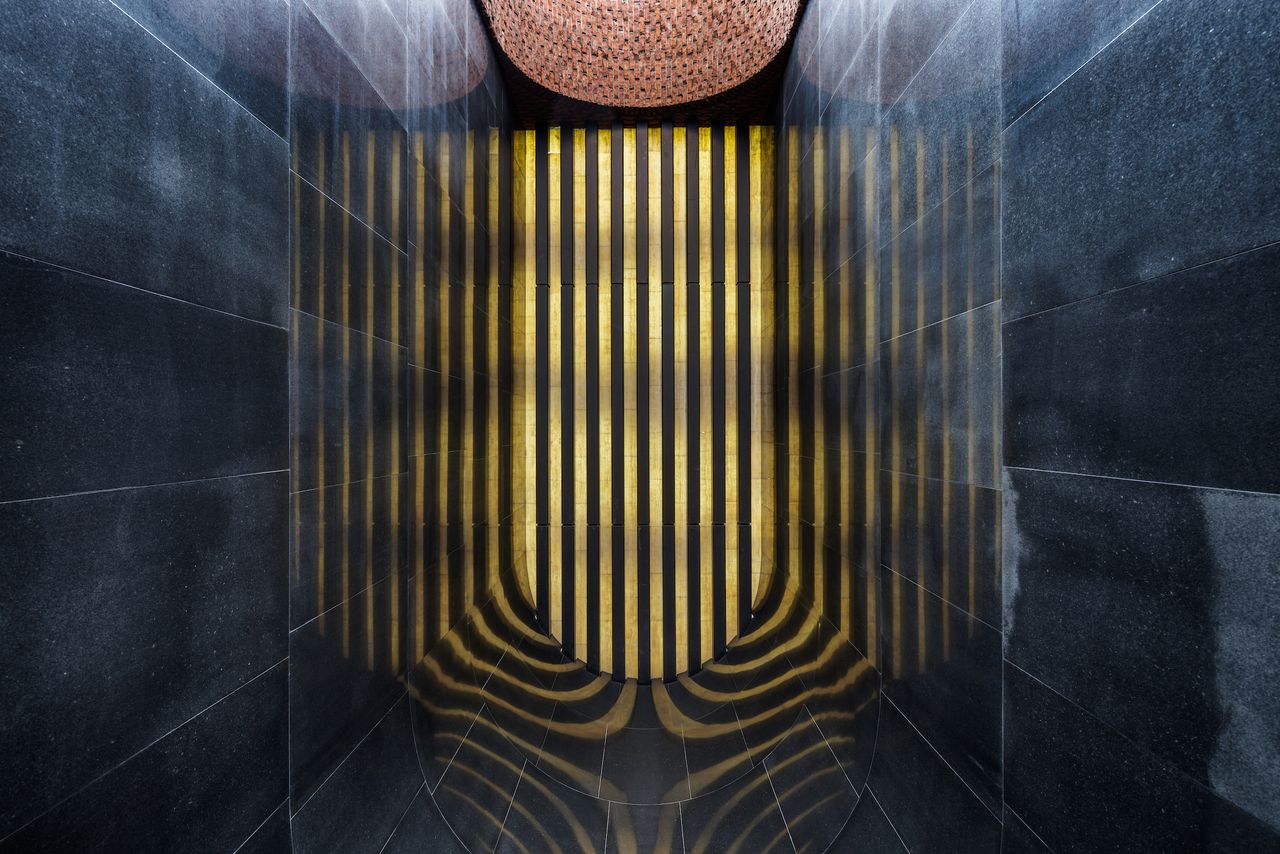 The Japanese government resolved in 1949 to construct this ten-hectare memorial park near the hypocenter of the nuclear bomb that devastated Hiroshima. A design competition was held that year that attracted around 140 entries. The winning design was submitted by Tange Kenzō and three members of Tange Laboratory at the University of Tokyo, Asada Takashi, Ōtani Sachio, and Kimura Norikuni. In Tange’s design, the Peace Hall (now the Peace Memorial Museum), Cenotaph, and A-Bomb Dome are aligned perpendicular to the boulevard Heiwa Ōdōri, which runs east-west through the city. It was one of the first large-scale projects by Tange, the “father of Metabolism,” predating the movement by some years. 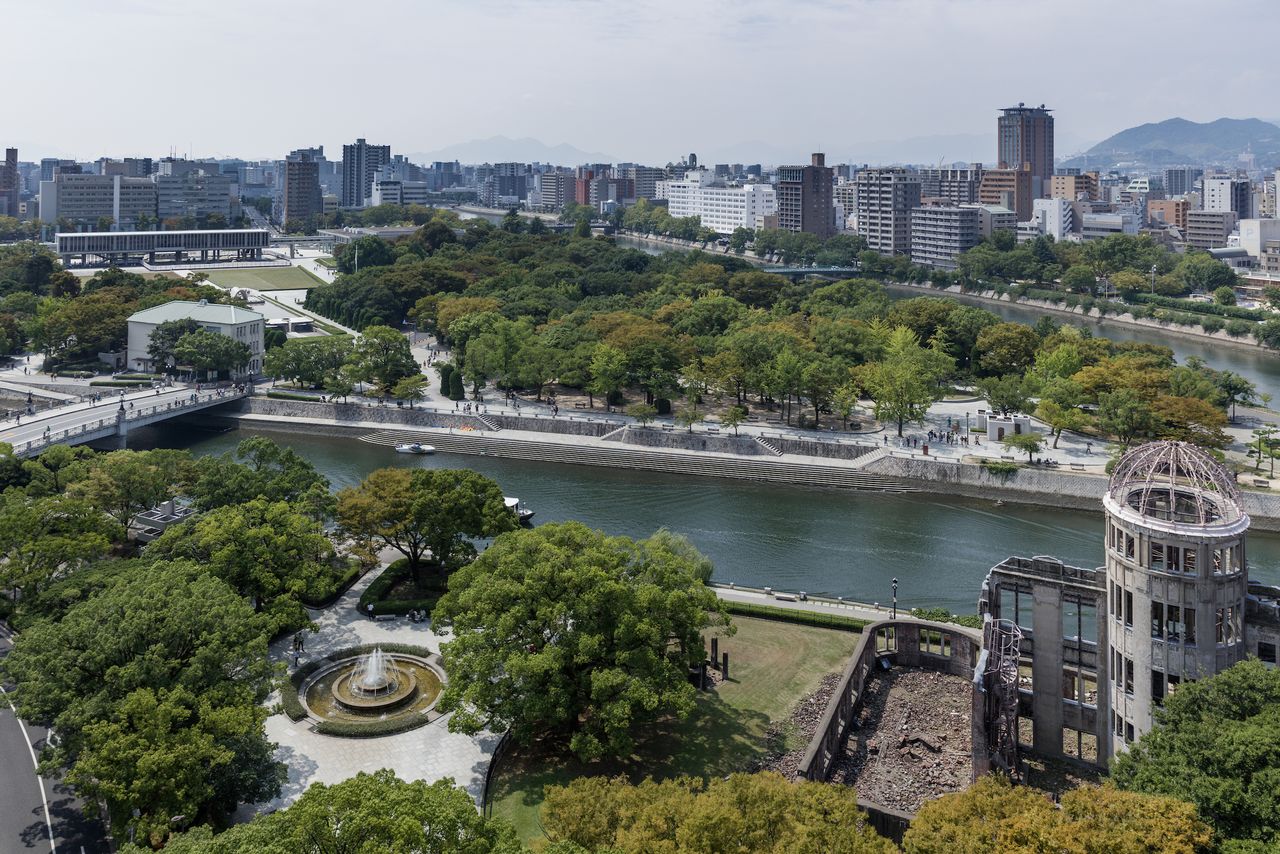 The Kuwait Embassy, built 16 years after the completion of the Hiroshima Peace Memorial Park, is indicative of Tange’s international recognition, which led to the architect being commissioned for projects in various Gulf states. Plans to rebuild the embassy were made public in 2017, with the project initially scheduled to be completed in April 2020. To date, though, demolition remains on hold, and it even appears that rebuilding plans have been shelved. 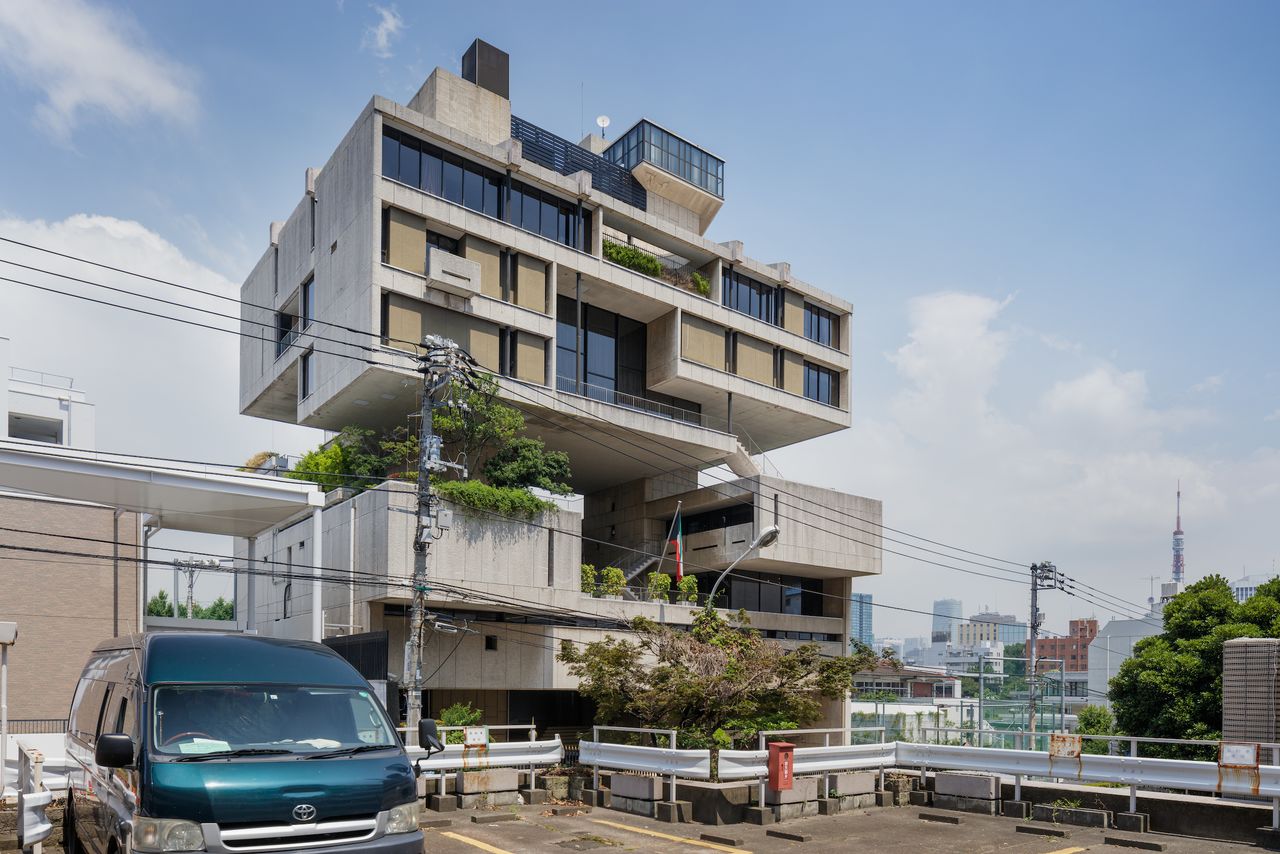 Located in Miyazaki’s second biggest city, this building hosted civic and cultural events for 40 years, but was closed in 2007 due to the mounting maintenance costs of the aging structure. Kikutake’s unique design was symbolic of Metabolism, leading to calls for its preservation. However, the building was demolished in 2019. 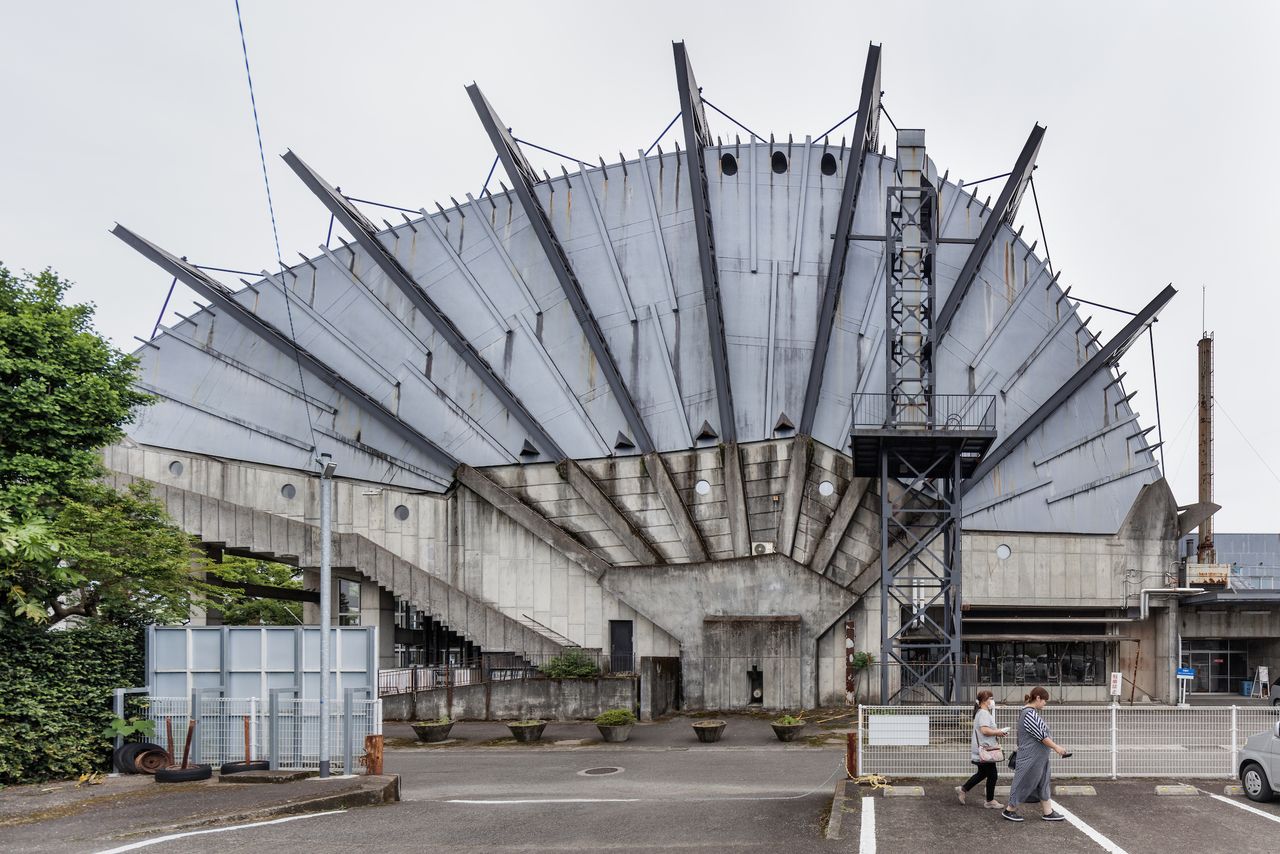 Kikutake Kiyonori designed this as his own home (the building in the lower-center of photo with a car parked outside). It features four reinforced concrete columns that support the walls, creating a square-shaped interior living space. At the time it was erected, there were no tall buildings in the vicinity. Exemplifying the application of the Metabolism idea to residential living space, it has undergone renovation and extension in response to the changing surroundings and the makeup of the residing family. 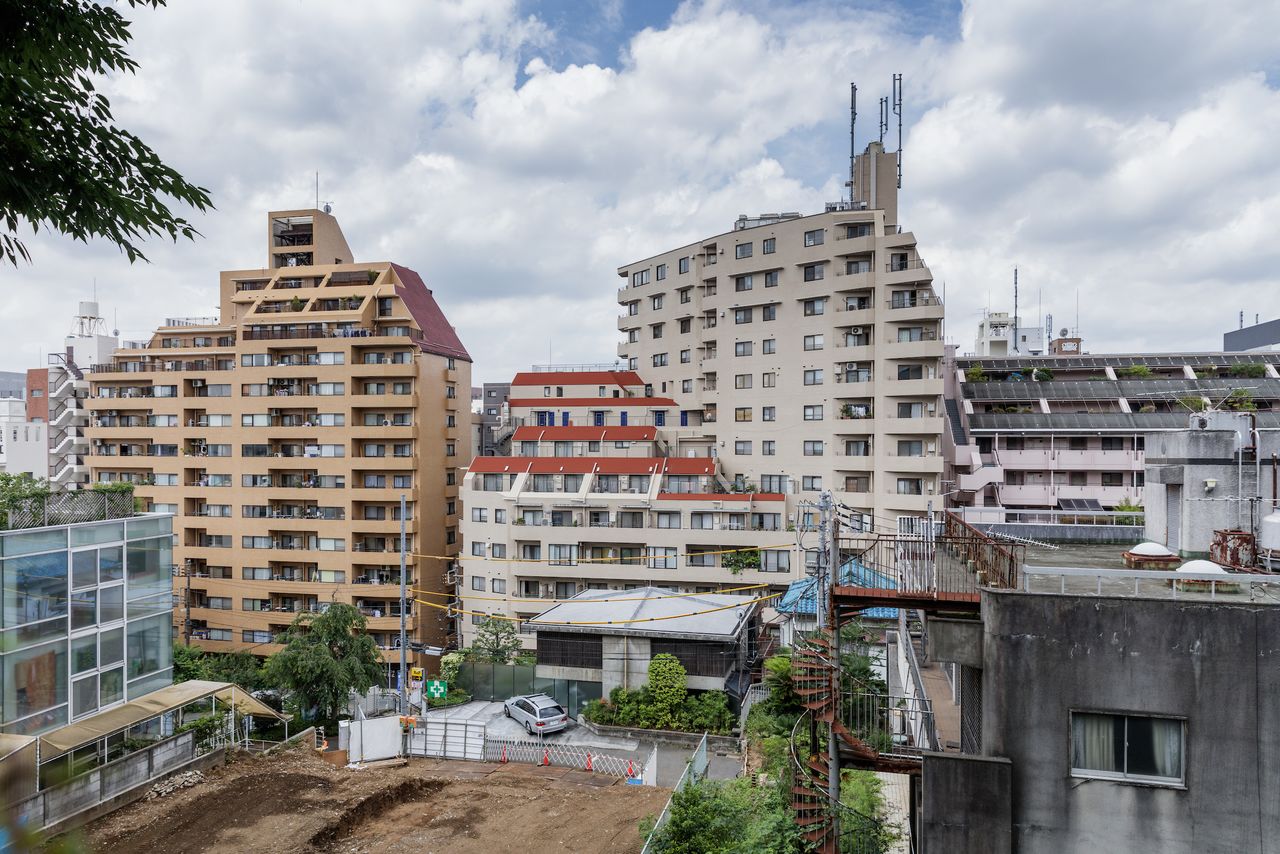 This was built near Karuizawa by Kurokawa as his holiday home. It features a core shaft of reinforced concrete that houses the stairs and extends from the entrance to the living room above. Four capsules, the same as used in the Nakagin Capsule Tower, are attached to the core. Two are used as bedrooms, one is the kitchen, and the fourth is a tea room. It is scheduled to be rented out as holiday accommodation starting in fall 2021. 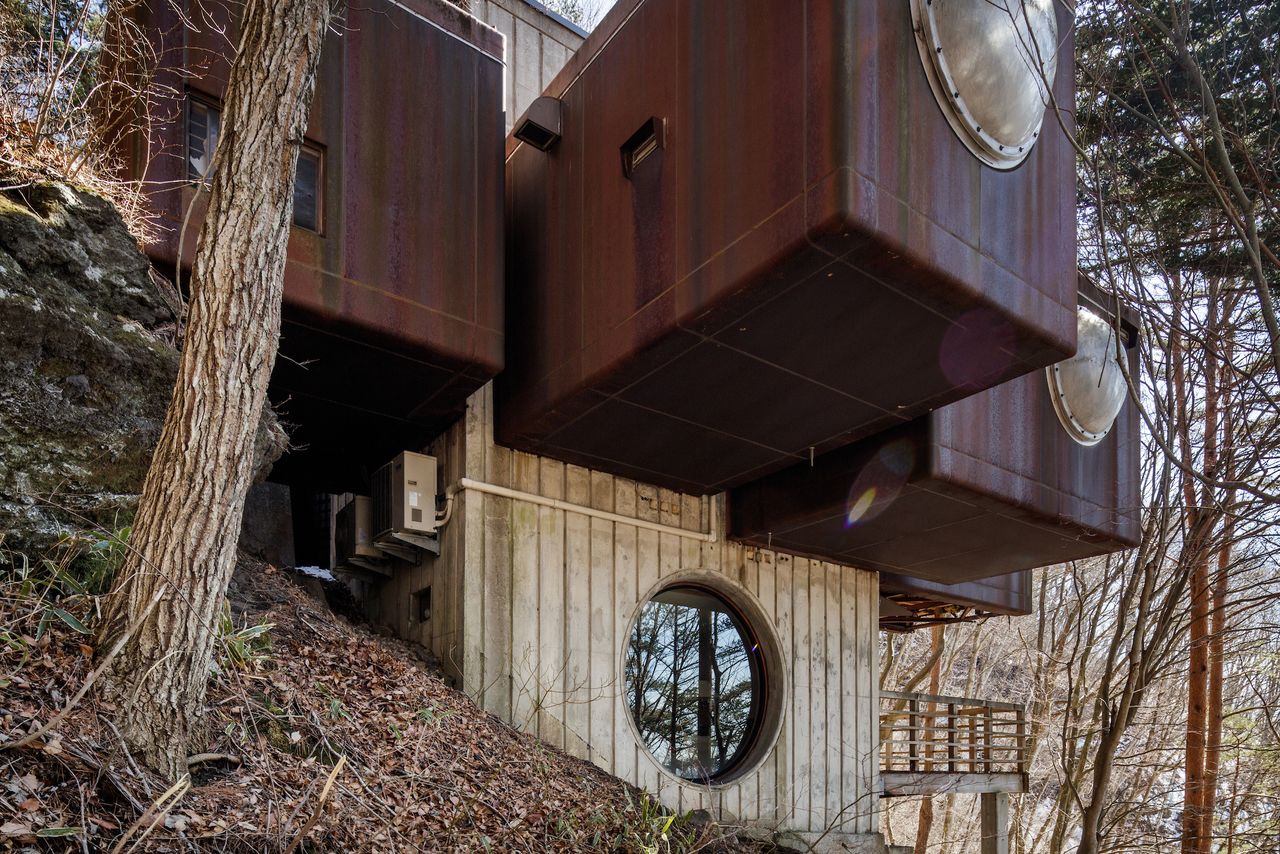 This 57-meter tall, 12-story corporate building, close to JR Shinbashi Station, is at the intersection of Sotobori-dōri and Nishiginza-dōri. Born of the Metabolism concept, its unique shape consists of a cylindrical core with protruding box-shaped offices. It is in the lower left of the second photo, with the Tokyo Expressway snaking around it. The rust-red rooftop of the Nakagin Capsule Tower is just visible on the right, looking towards Shiodome. Both were the tallest structures in the area when they were built. 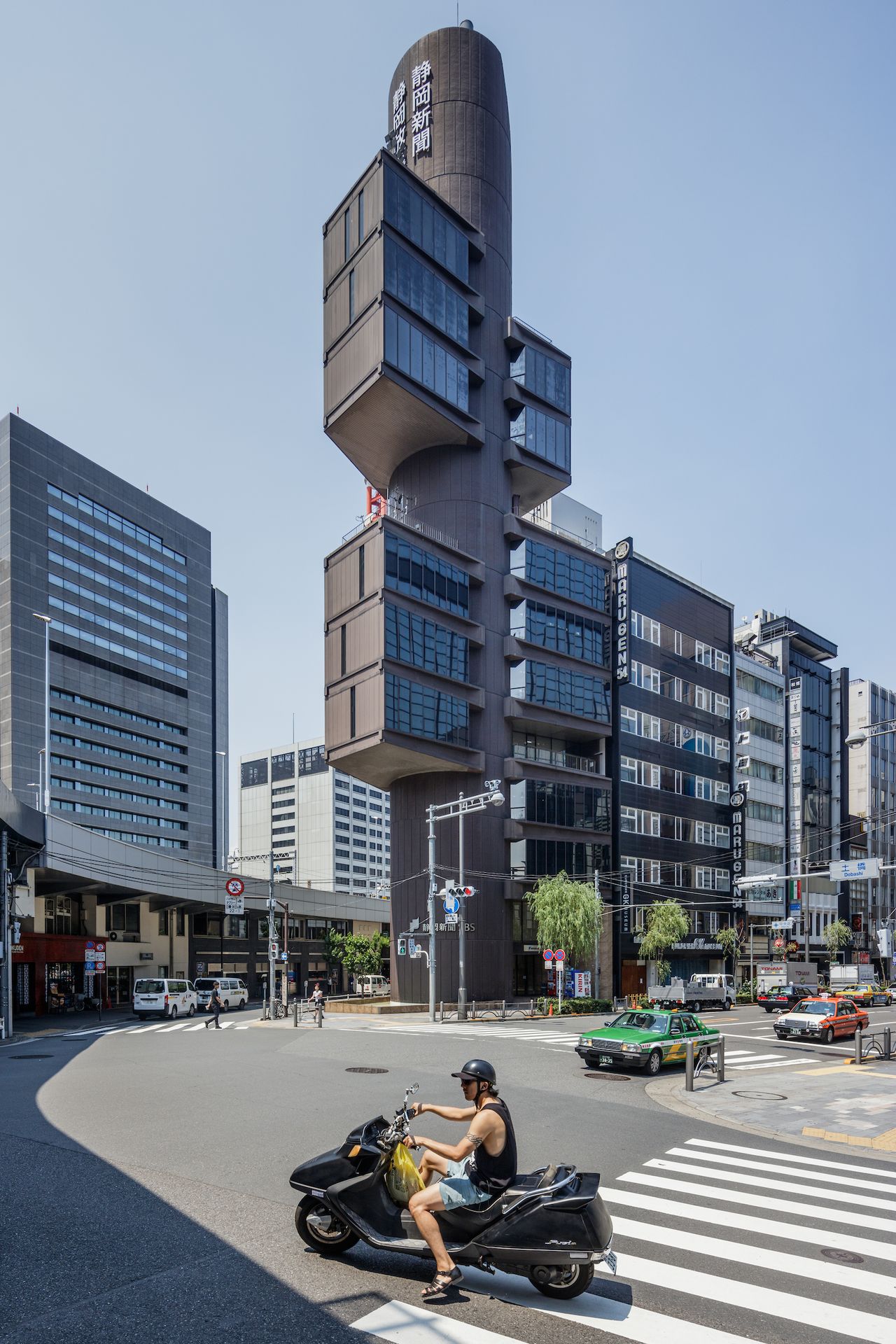 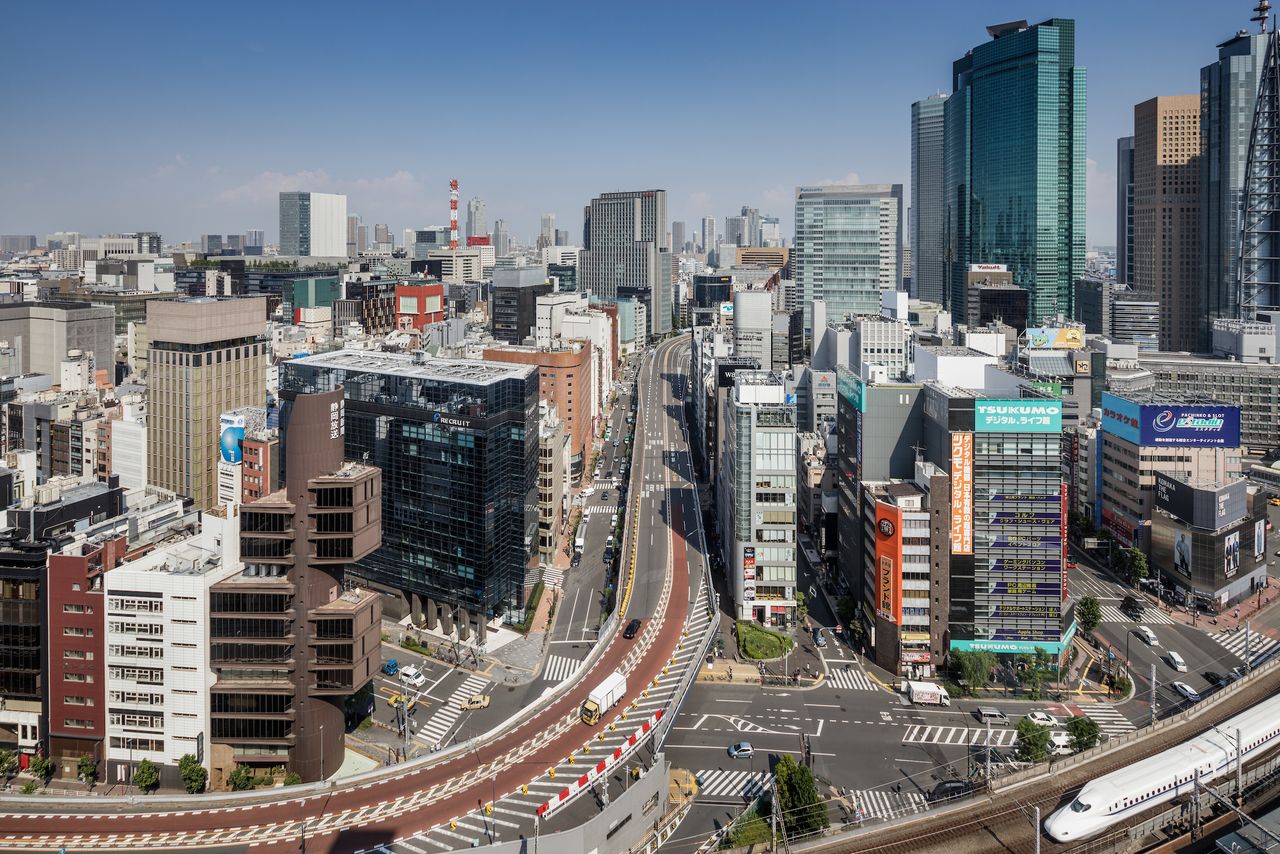 (Originally published in Japanese. Banner photo: The Nakagin Capsule Tower in Chūō, Tokyo. The building is slated for demolition in early 2022. Photographed on July 23, 2016. All photos © Jérémie Souteyrat.)