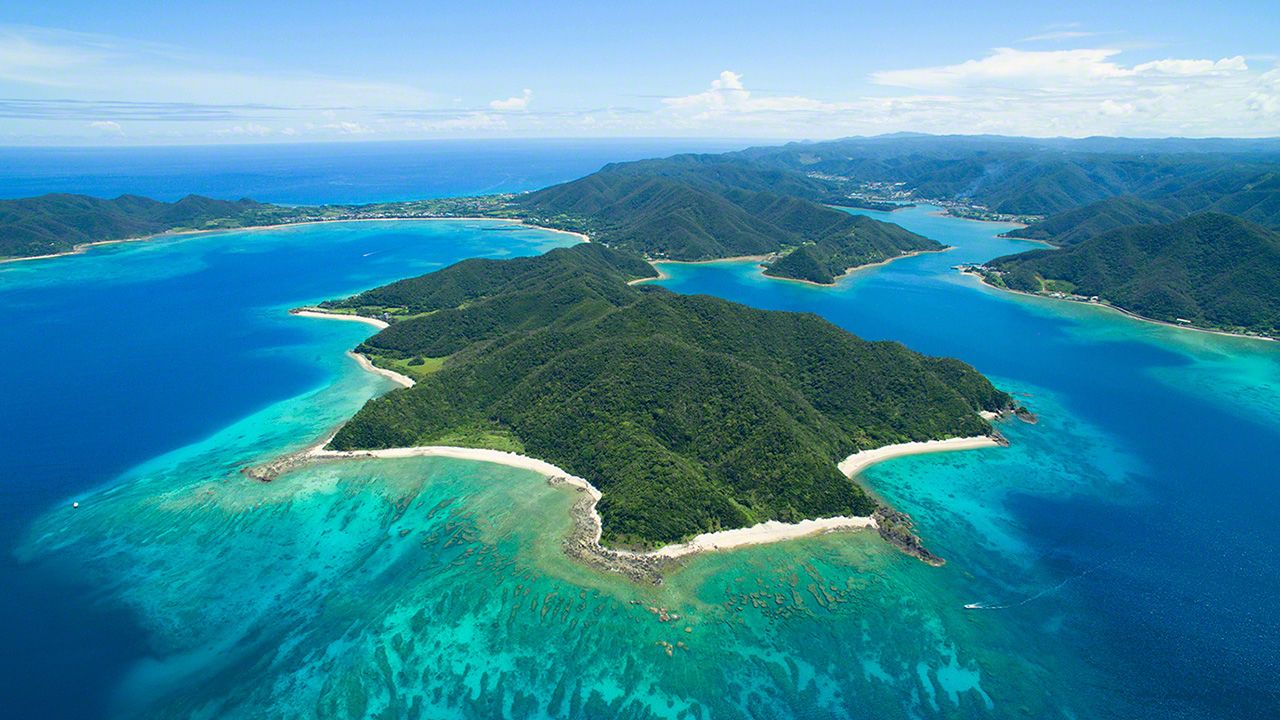 The Ancient Flora and Fauna of Amami Ōshima and Tokunoshima

Environment Jan 2, 2023
A professional photographer is our guide to the subtropical forests of Amami Ōshima and Tokunoshima, southern Japanese islands that are home to plants and animals found nowhere else on earth.

The rich biodiversity of Amami Ōshima and Tokunoshima has its beginning millions of years ago. Once part of the Eurasian continent, the islands, part of the Amami archipelago, broke away and gradually drifted into the waters that today separate Kyūshū and Okinawa, taking with them flora and fauna from the mainland. Many of these species, such as the Amami rabbit now only survive on these two remote outposts in Kagoshima Prefecture.

In July 2021, Amami Ōshima and Tokunoshima were inscribed along with the northern island of Okinawa and Iriomotejima on the UNESCO World Heritage list. As someone who spent decades documenting the unique plants and animals of these two islands, their listing as part of this collective natural heritage site, the fifth in Japan, was the realization of a long-cherished dream for me and others involved over many years in conservation efforts.

Although I hail from Amami Ōshima, when I started photographing the Amami rabbit in 1986, I knew almost none of the names of the mammals, birds, insects, and other endemic creatures inhabiting my home island. As I made more forays into the subtropical forests, though, I grew familiar with the distinct characteristics of the different flora and fauna I came across and developed a deep appreciation of the biodiversity around me.

One pressing question I had early on was how these plants and animals, many of them relics of species now extinct on the mainland, survived mostly unchanged through the ages. I realized that to answer this and other mysteries that the forest held, I had to study the natural environment closely, observing the cycle of life as it unfolded. Photographing the forest realm has been a meditation on the seasonal workings of nature.

Spring marks the beginning of another cycle of life on Amami Ōshima and Tokunoshima. The warm southerly winds begin to blow in early March, bringing rain in abundance that moistens the forest and stirs the slumbering insects in the soil into action. These are attracted to the nectar of the newly budding and blooming plants, helping pollinate them. Resident birds nourish their young on the wealth of insect larvae, and from the south, their migratory cousins arrive to rest their wings and feed in the islands’ forests and tidal flats before starting off again on their northward journey.

May and June are the rainy season, when the forest is at its most active. Animals busily feed to build their strength and stamina ahead of the arrival of summer’s brutal heat. They must remain wary, though, of the hungry habu (yellow-spotted pit viper), the apex predator on the islands, lurking in the underbrush.

The arrival of summer brings wild orchids blooming in the forest and cicadas singing in the trees. The flocks of migratory birds busily raise their young. Along the coast, corals spawn while sea turtles bury their eggs in the sand.

Around early September, the shifting of the wind announces the arrival of autumn. Migratory birds stop to feed and rest in the forest and tidal flats on their return trip to warmer southern waters, while others remain to winter on the islands. Deep in the forest, the Amami excavates its nest in the earth in preparation for giving birth.

November is a fertile time in the forest. Autumn flowers bloom in the mountains and the nuts of chinquapin and other trees ripen and drop to the ground. Scores of newborn Amami rabbit kittens huddle in nests awaiting their mother, who returns every other night to suckle her babies briefly before scurrying off again.

Around December, Ryūkyū ayu, an endemic species of sweetfish, begin to spawn in streams on Amami Ōshima. Humpback whales that have migrated south to give birth appear with their calves in coastal waters, remaining briefly before returning to rich north waters in the spring.

I set out nearly four decades ago to document the Amami rabbit, and in doing so I had my eyes opened to the biological uniqueness of Amami Ōshima and Tokunoshima. The islands are home to a wide diversity of native plants and animals, ancient inhabitants that have existed harmoniously in much the same way for countless ages. Below I offer a look into this timeless world. 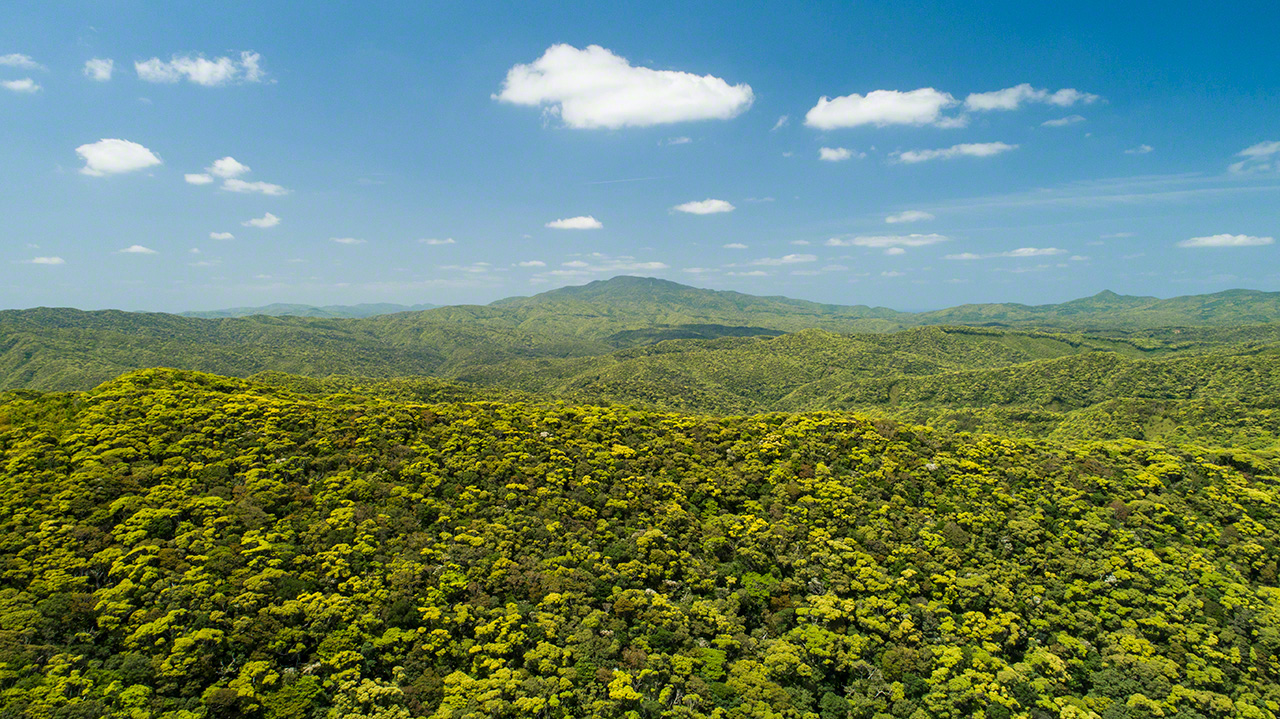 Subtropical forest spreads across the foothills of Mount Yuwandake. At 694 meters, it is Amami Ōshima’s tallest peak. 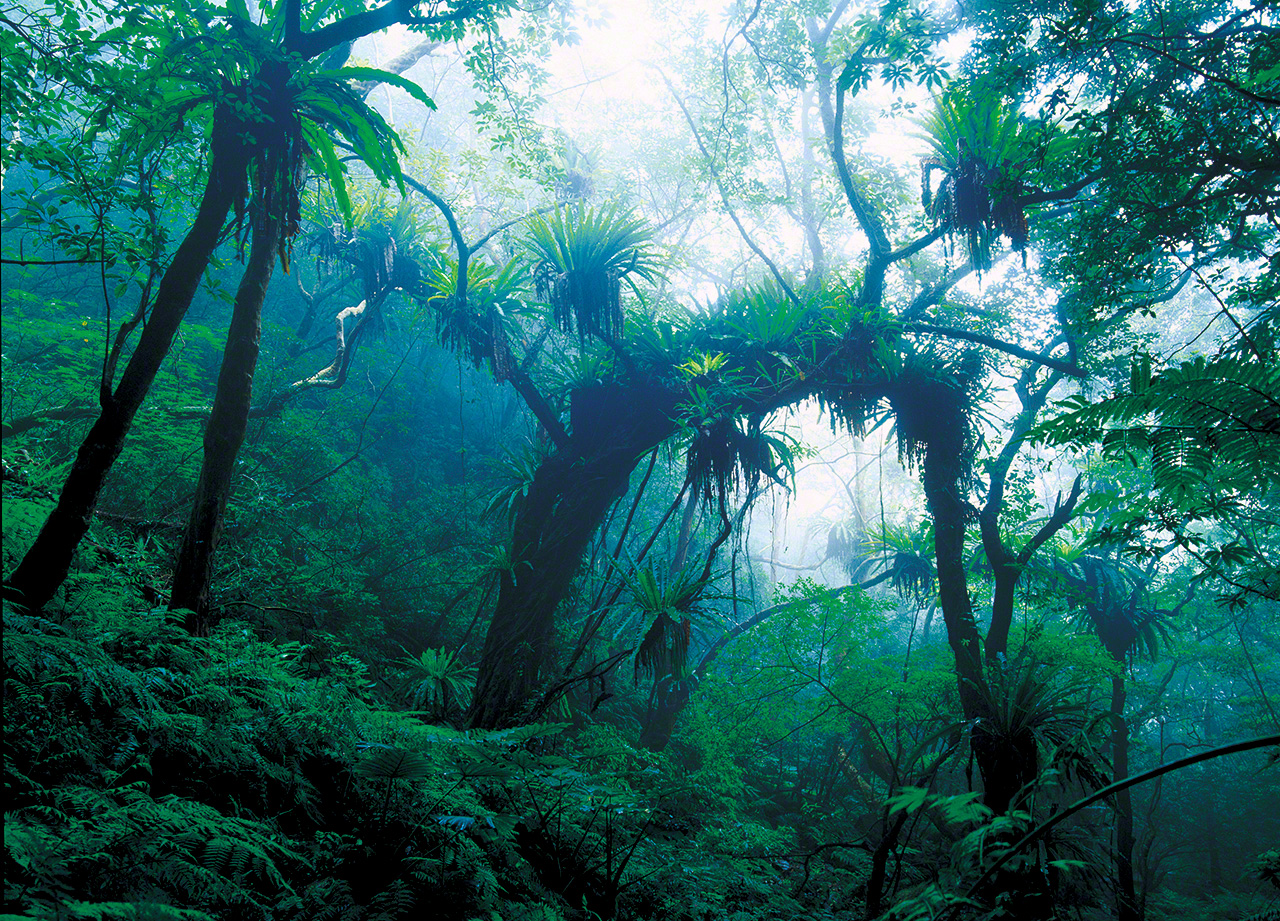 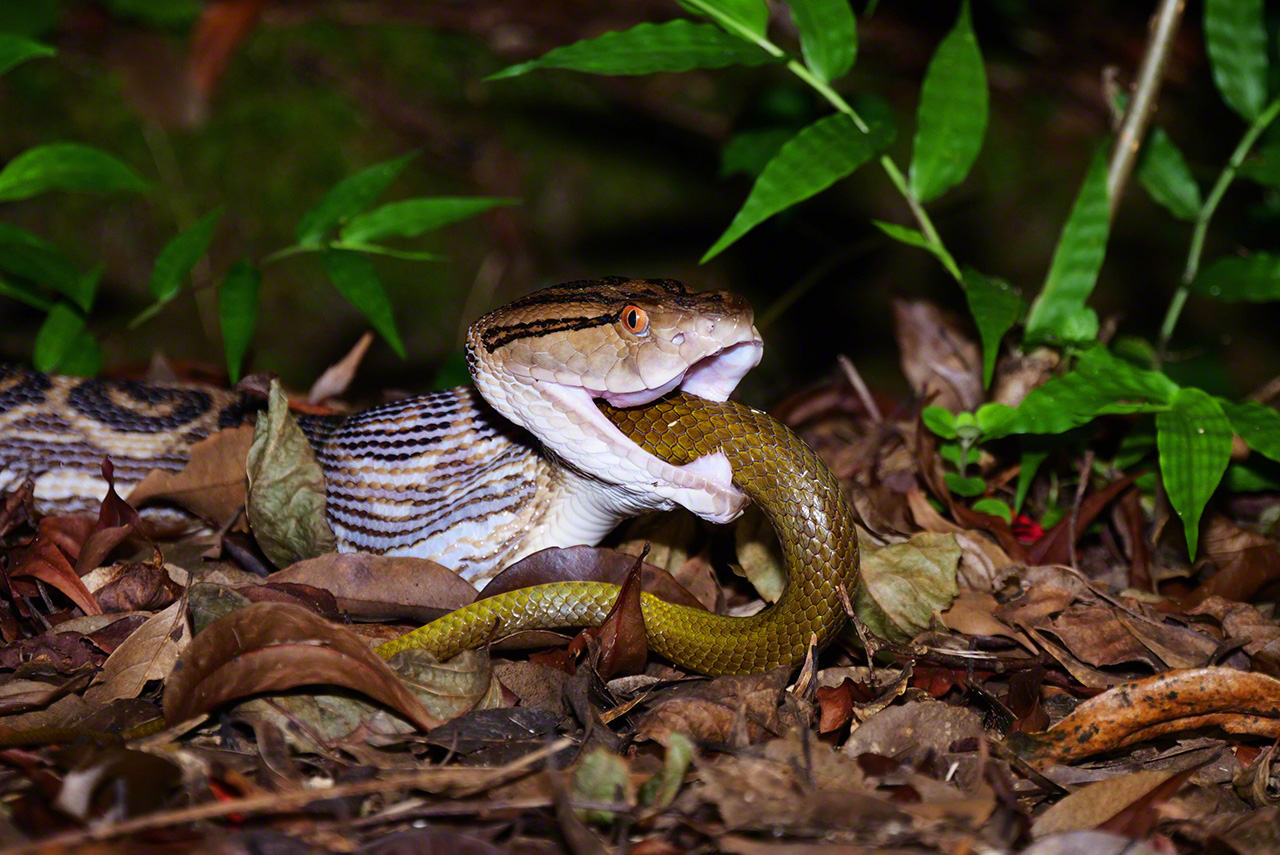 Habu are at the top of the food chain. Here one devours a nonvenomous Ryūkyū green snake. 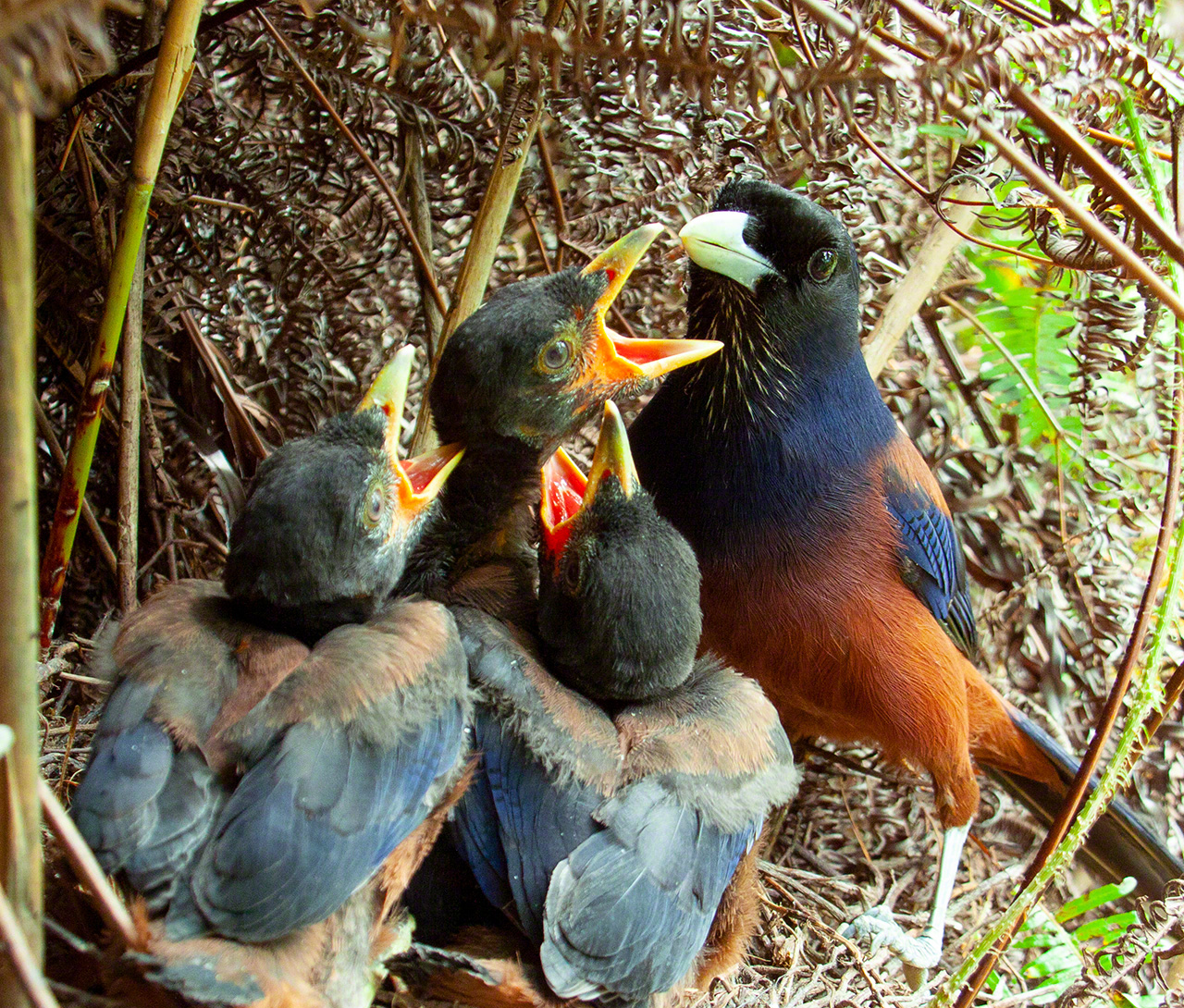 A Lidth’s jay feeds its young. Registered a national natural monument, the bird is found only on Amami Ōshima and the islands of Kakeromajima and Ukejima, also in the Amami archipelago. 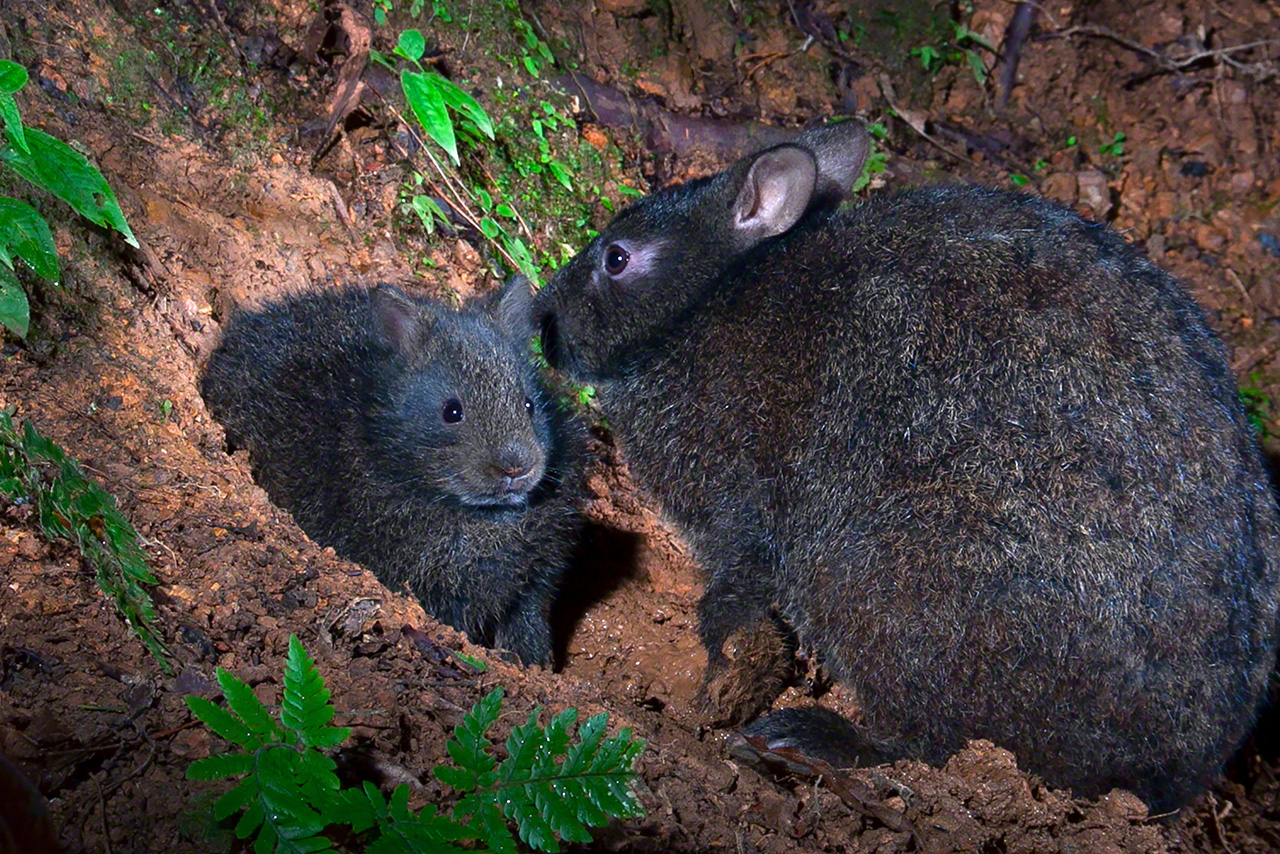 An Amami rabbit mother and kitten outside their nest. 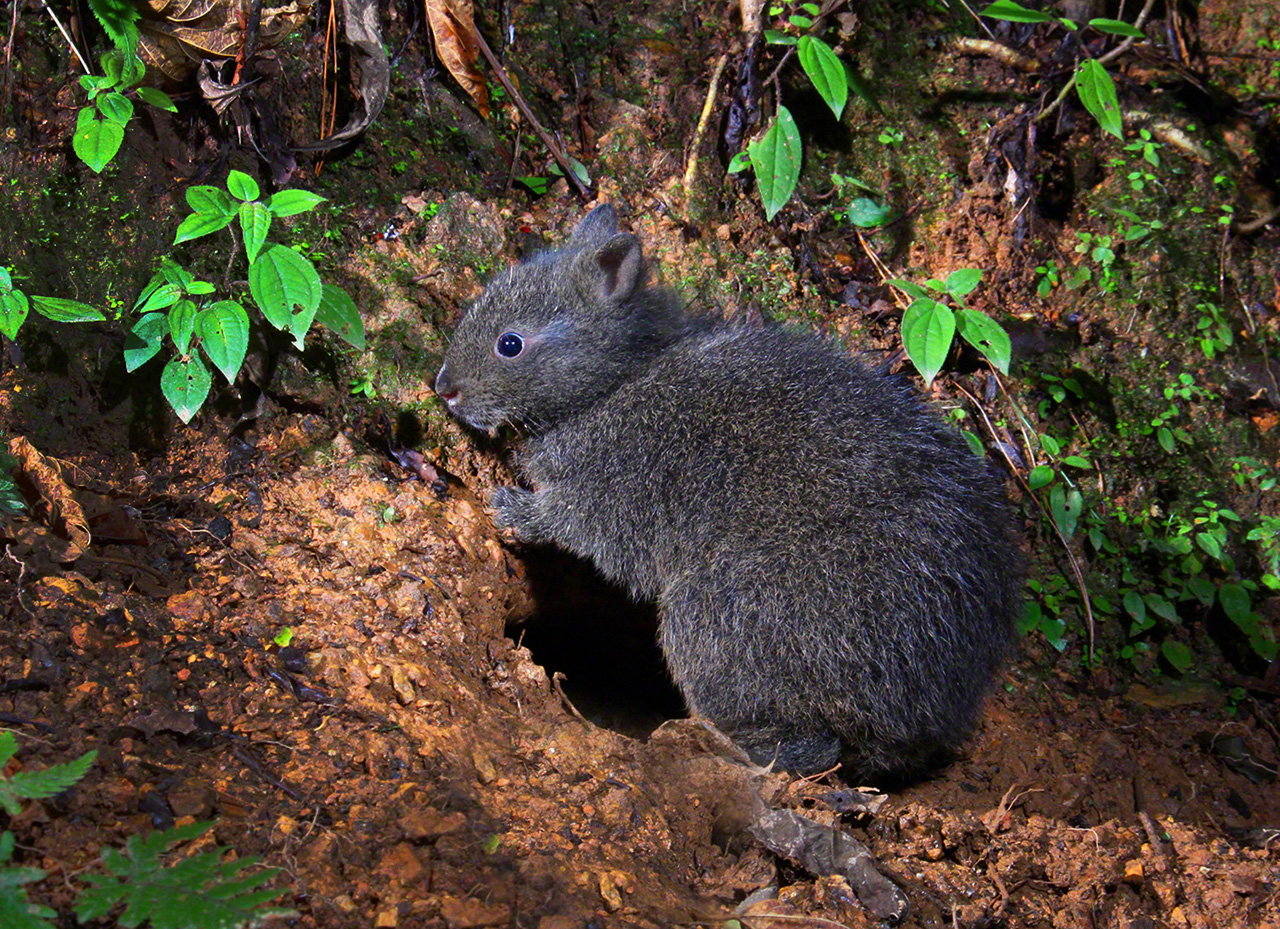 An Amami rabbit kitten prepares to leave its nest. 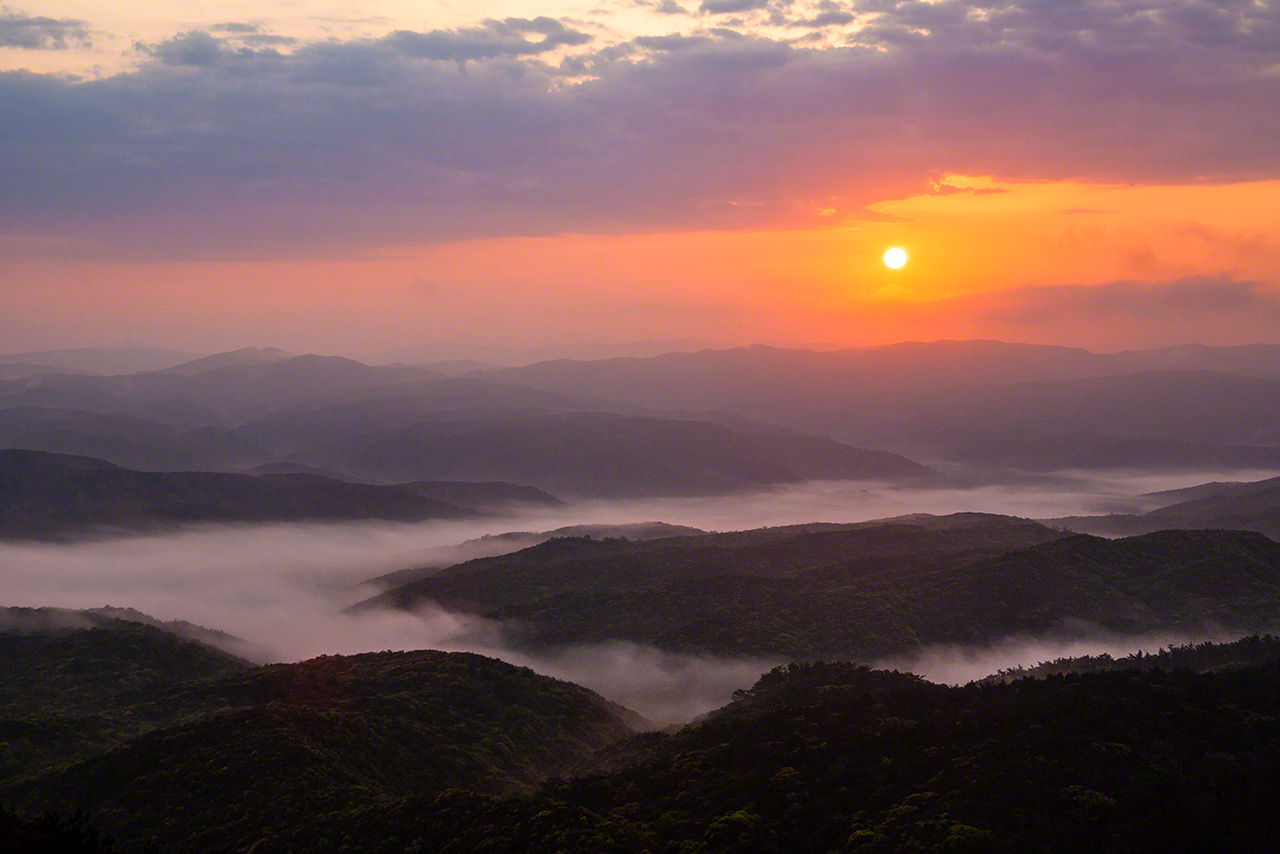 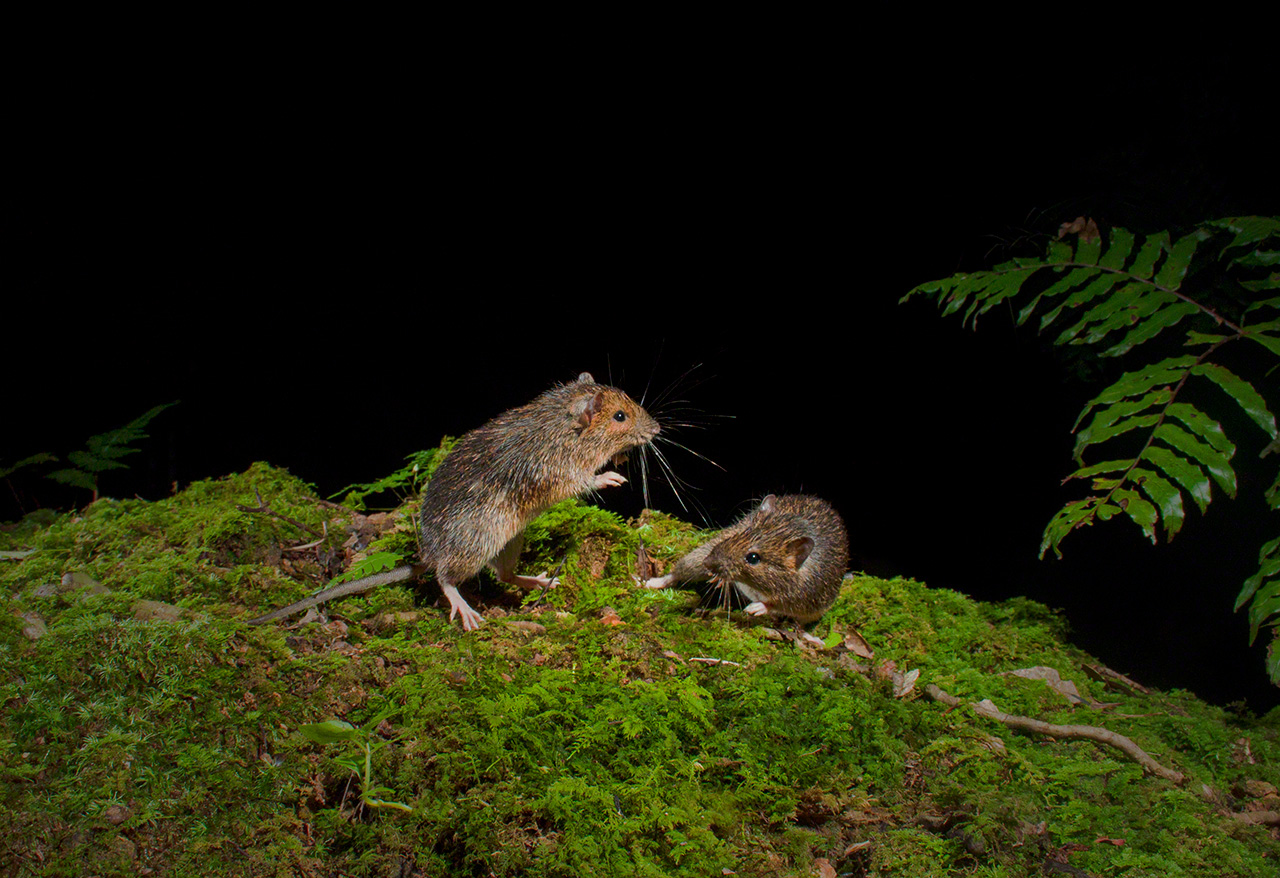 A pair of Amami spiny rats battle on the forest floor. The species, a national natural monument, has drawn the attention of researchers as males lack a Y chromosome. 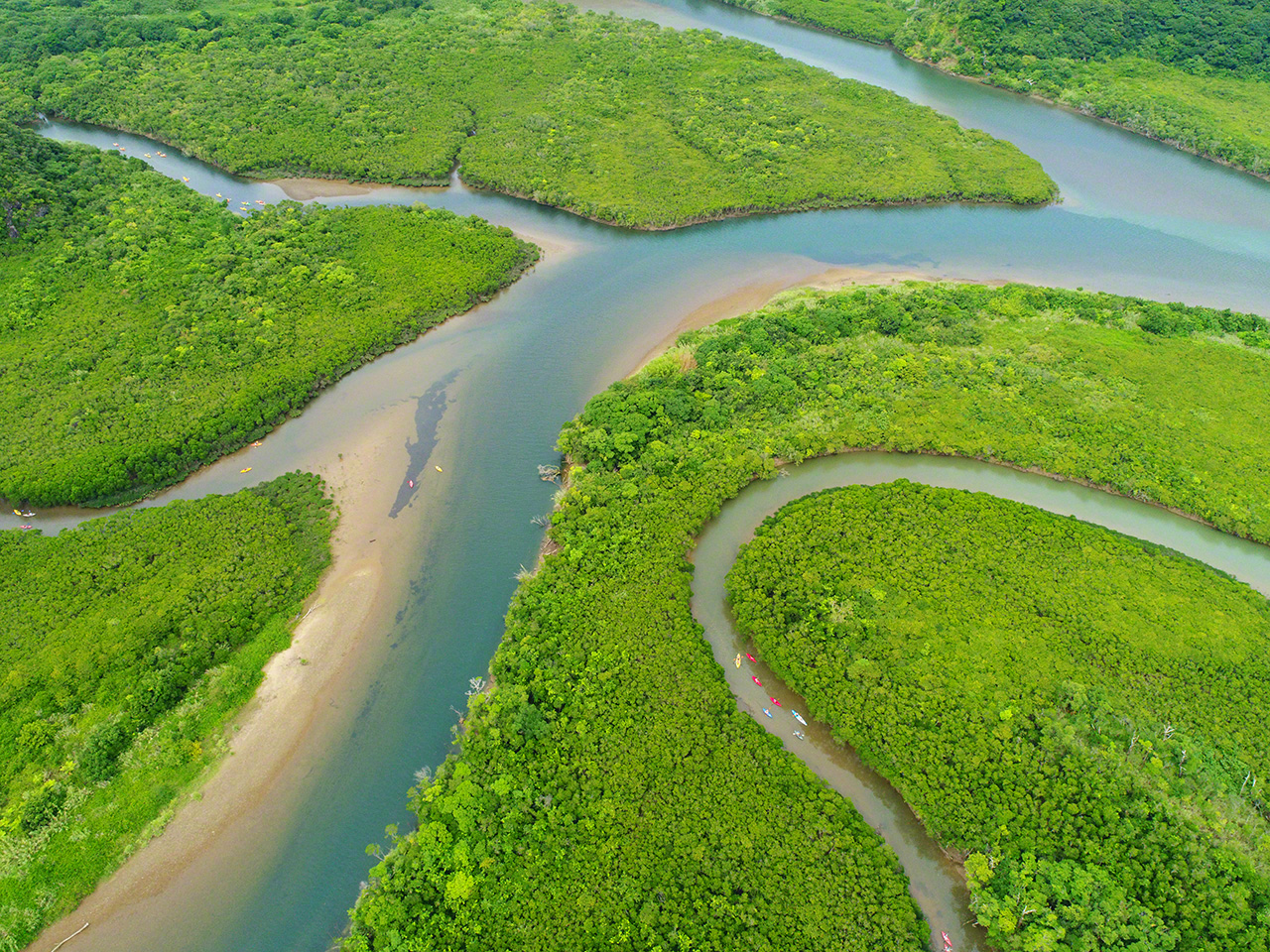 Mangroves spread along a waterway on Amami Ōshima. The island has the second largest mangrove forest in Japan, after Iriomotejima. 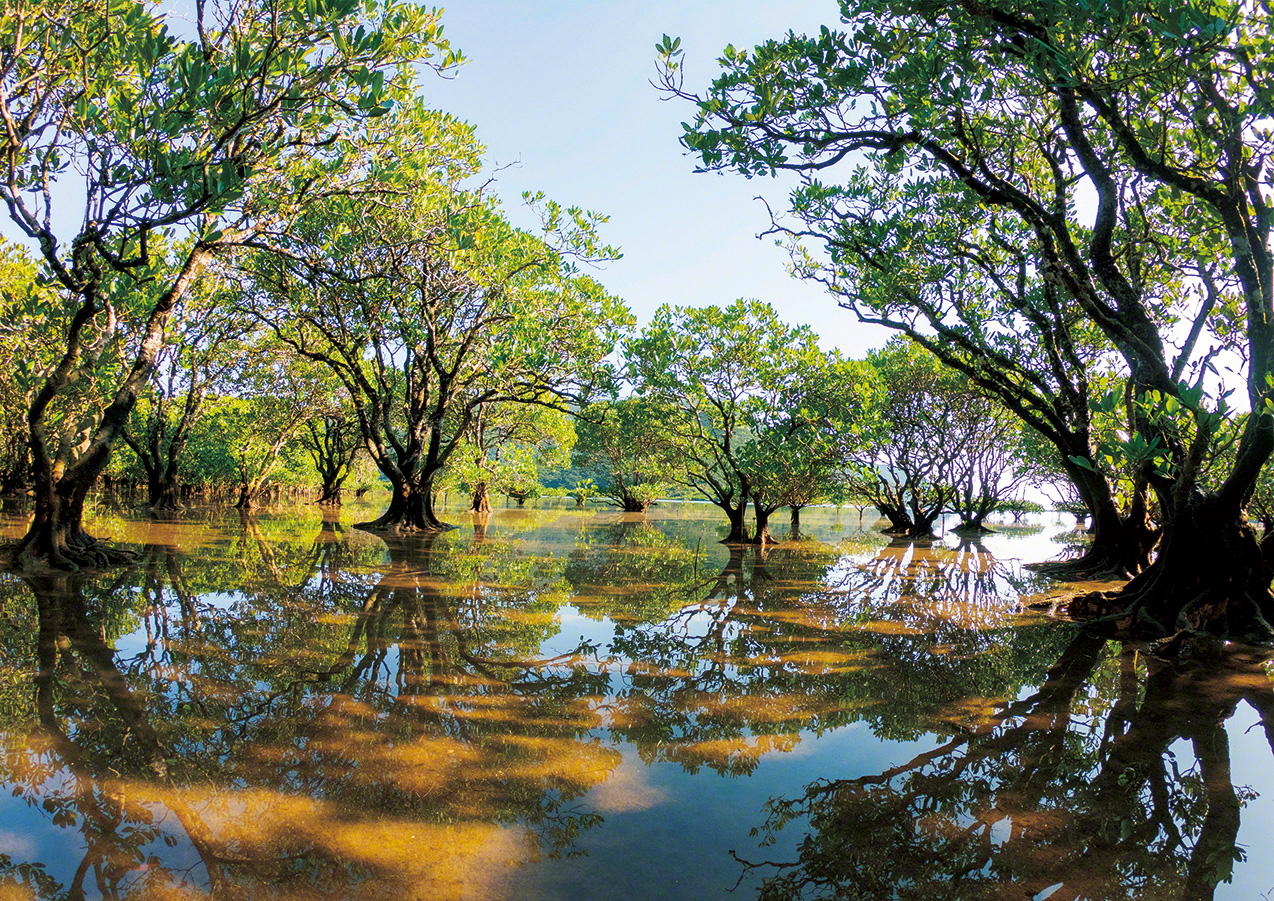 Mangroves growing along a tidal flat. The forests support an array of plants and animals. 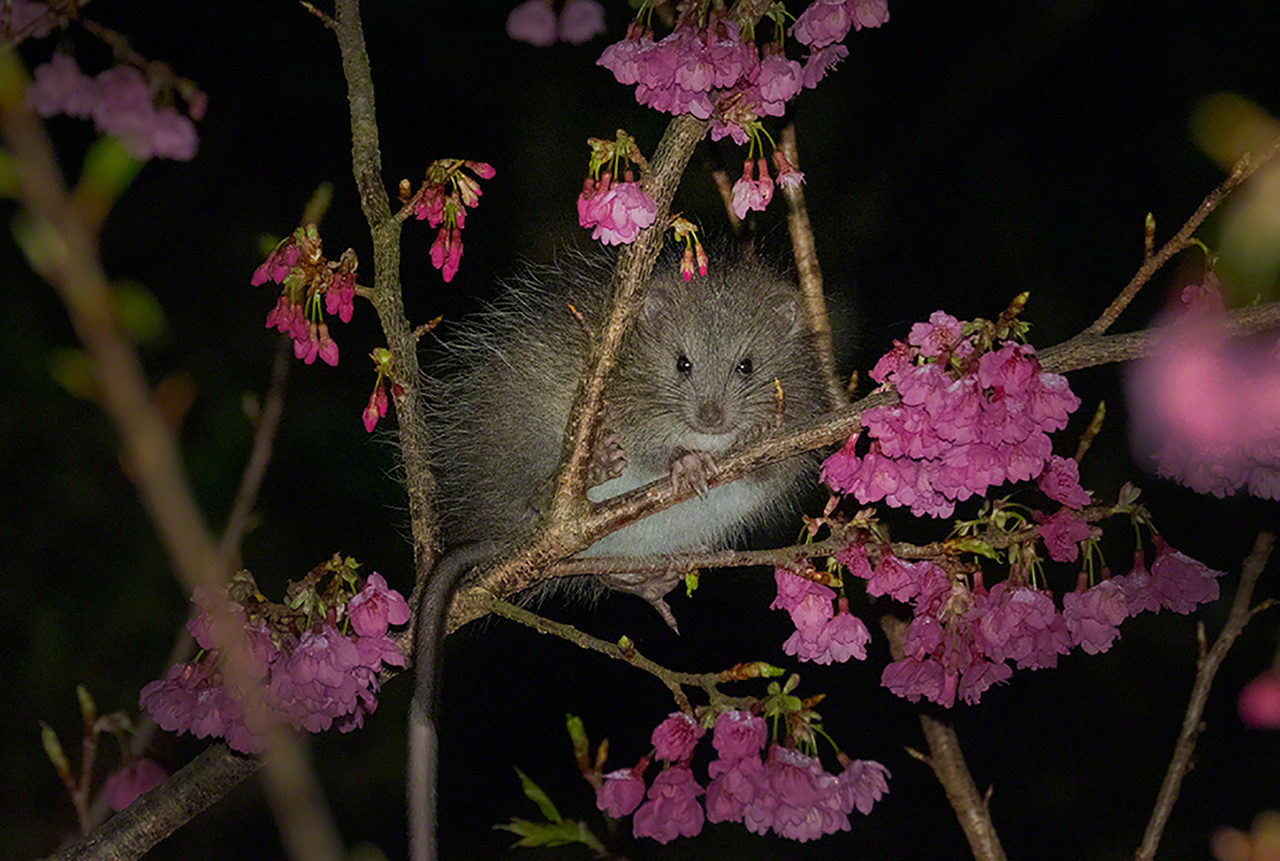 A Ryūkyū long-haired rat makes a rare appearance. Designated as a national natural monument, the species, the largest rodent in Japan, is extremely difficult to spot in the wild. Subsequently, much about it remains a mystery. 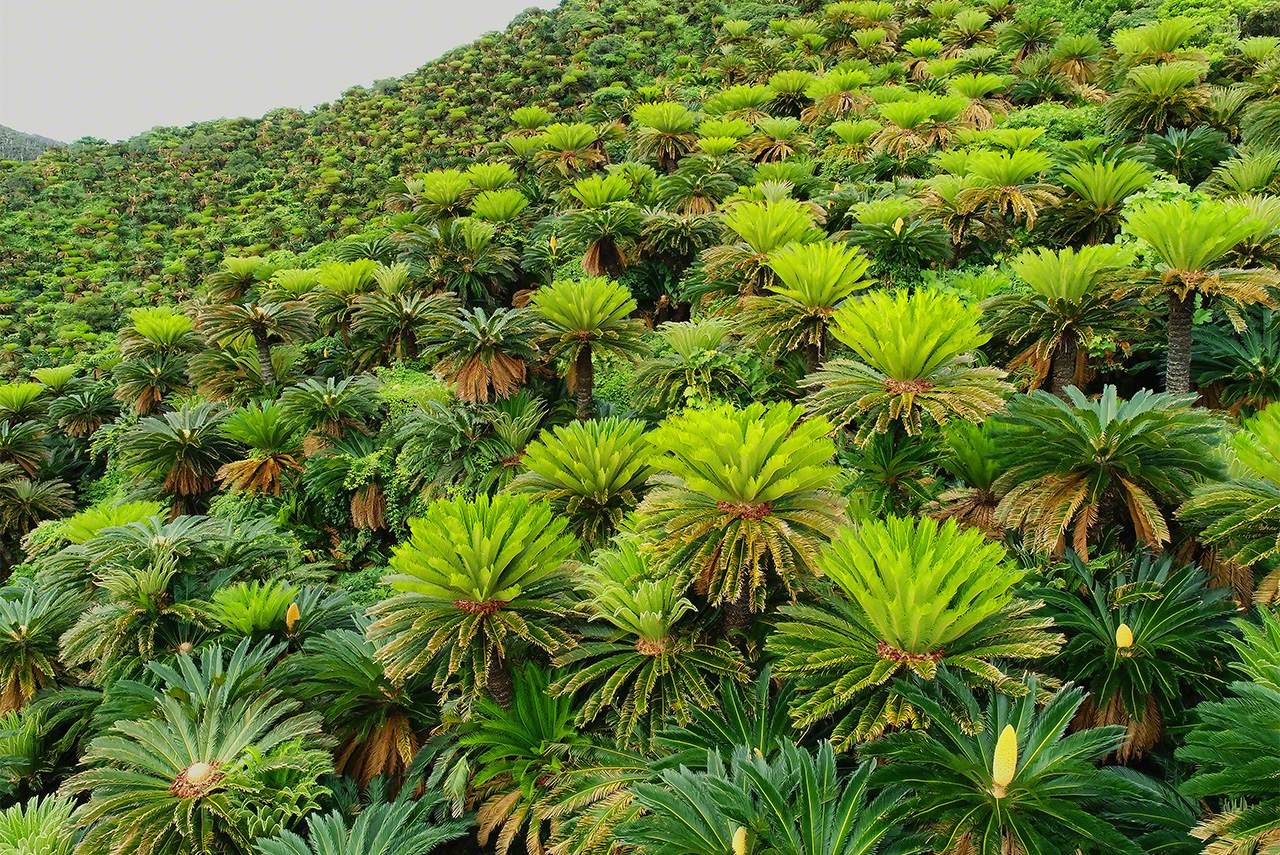 Sago palms along the coast show off their new foliage, a familiar scene from May to June. 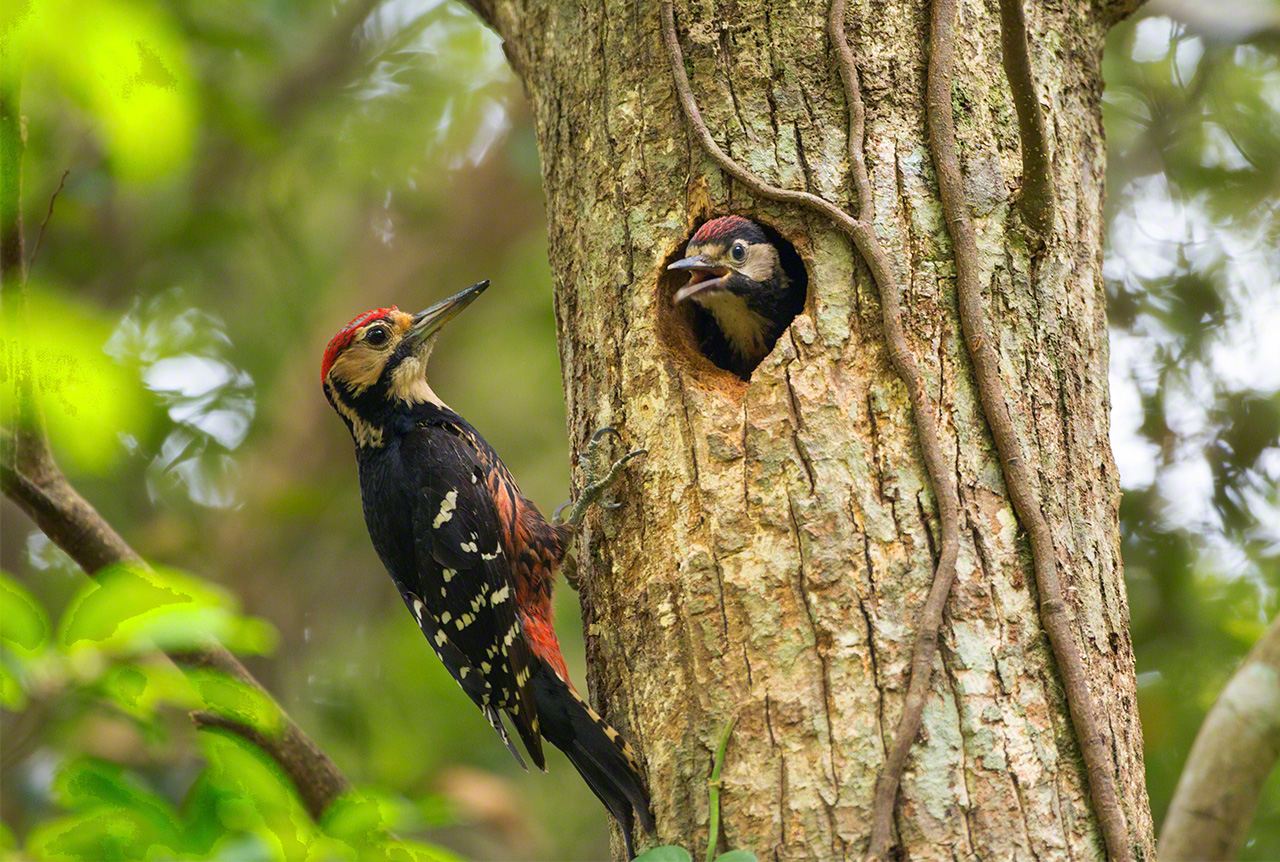 The white-backed woodpecker rears its young in nests hollowed out of trees. A type of woodpecker, it is designated a national natural monument. 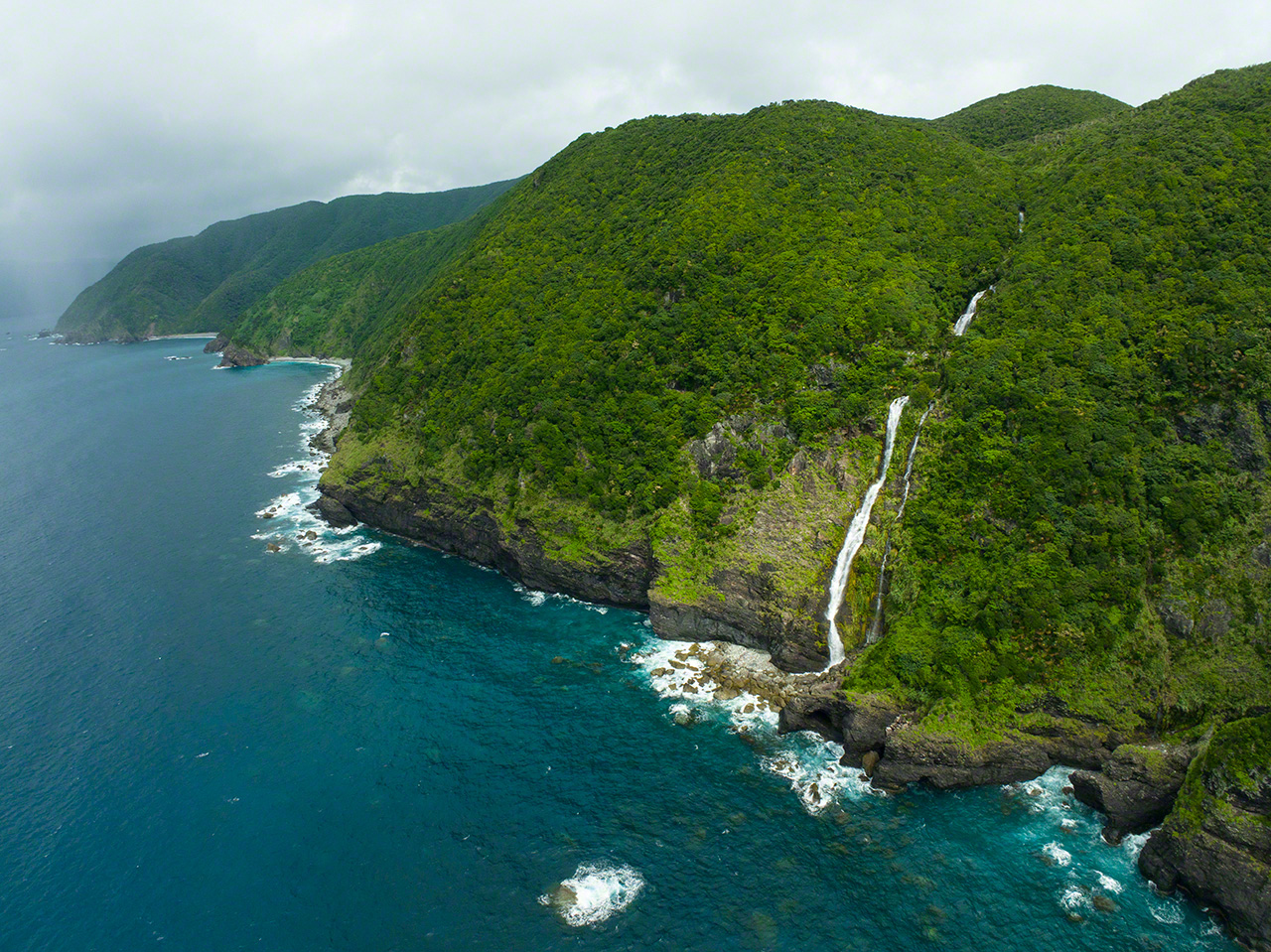 Kurukichi Falls, one of many cascades on the sheer cliffs along Amami Ōshima’s eastern shore. At 181 meters, it was designated the largest waterfall in Kyūshū in 2021. 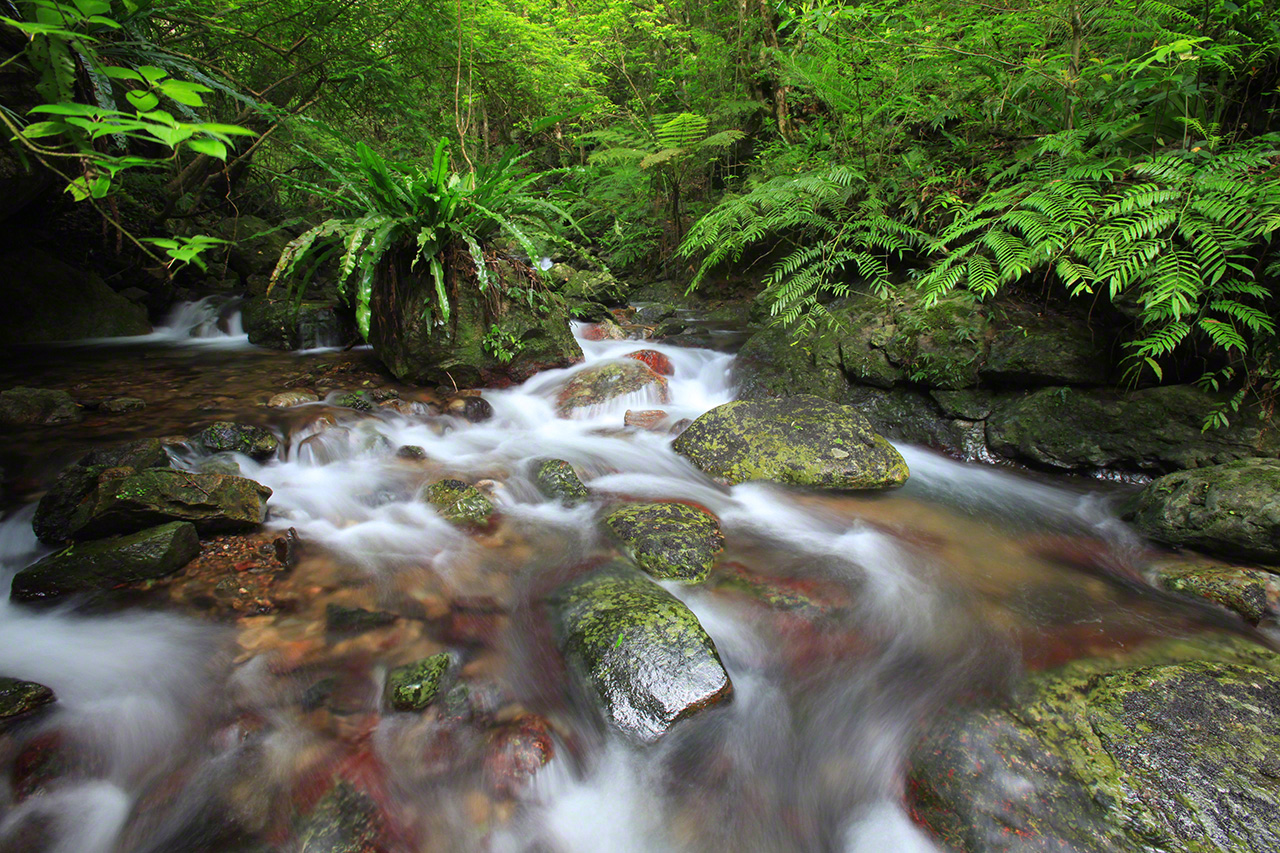 Forest streams like this one are vital to island wildlife. 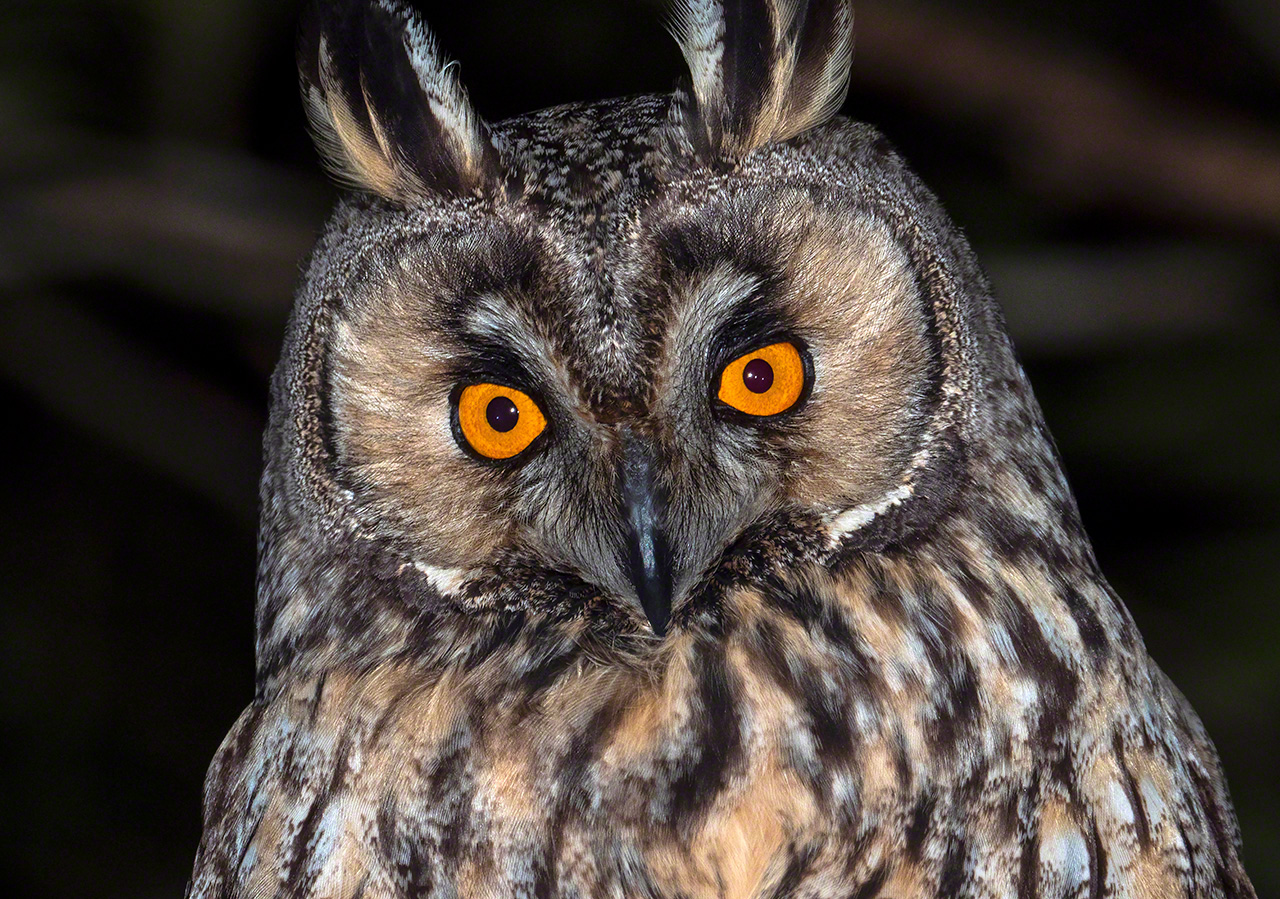 A long-eared owl. The forest-dwelling species is known to winter on Amami Ōshima, but its nocturnal behavior keeps it mostly out of sight of human inhabitants of the island. 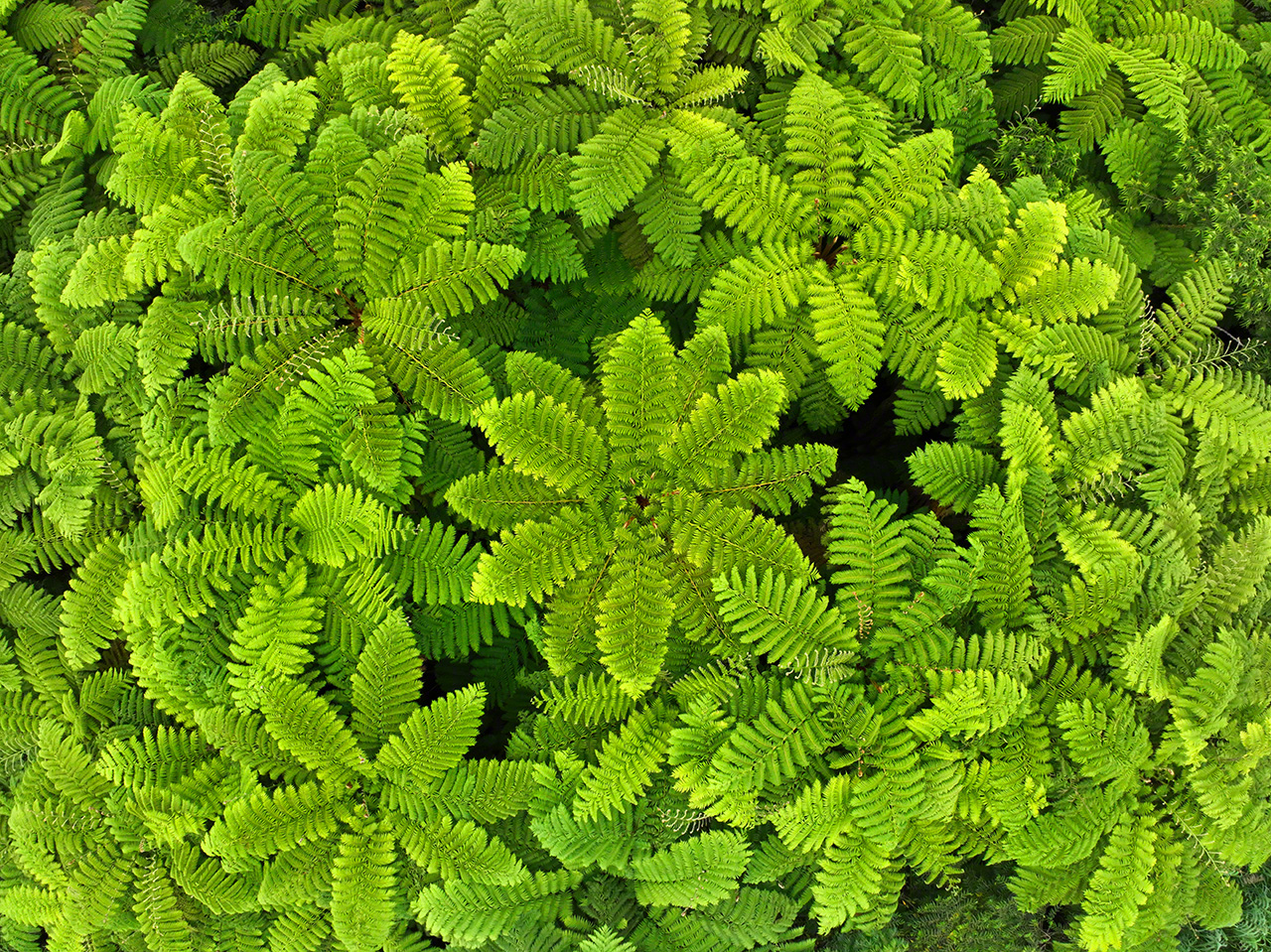 A stand of flying spider-monkey tree ferns. During the rainy season, these remnants of the Jurassic period drink up the abundant rainfall, pumping it into the canopy to spread their broad fronds. 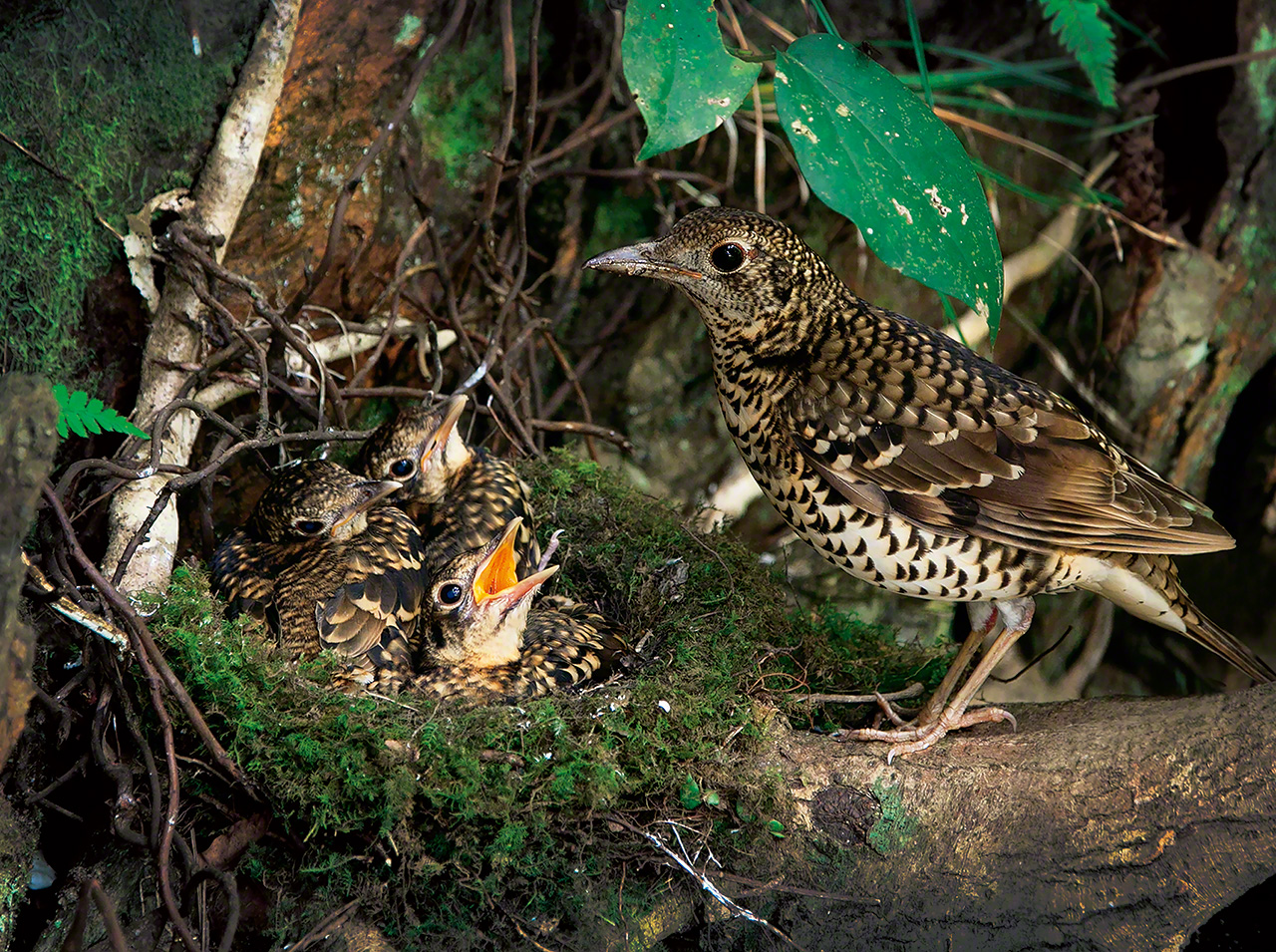 An Amami thrush and its young. A national natural monument, the bird was driven nearly to extinction due to the loss of its habit from logging. The population is gradually recovering as reforestation efforts continue. 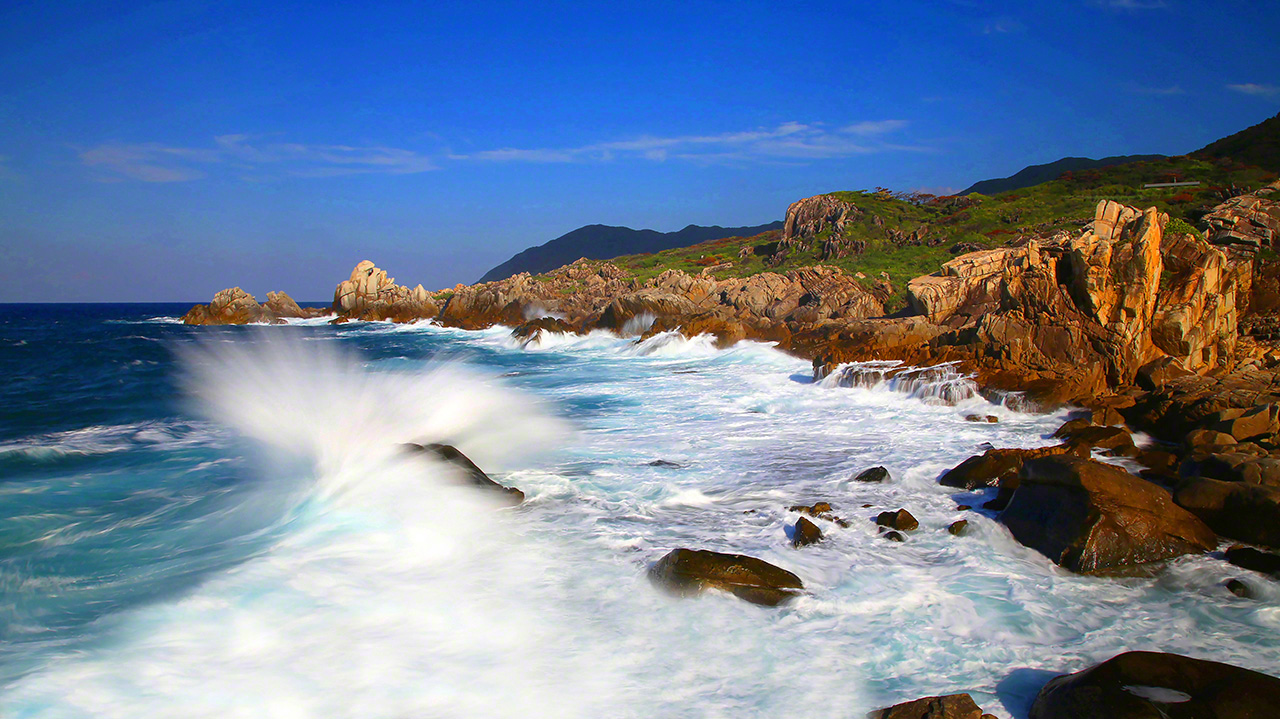 Tokunoshima’s rocky Mushirose coast. The name derives from the area’s numerous large stone slabs, which are said to resemble woven mats called mushiro laid out on the ground. 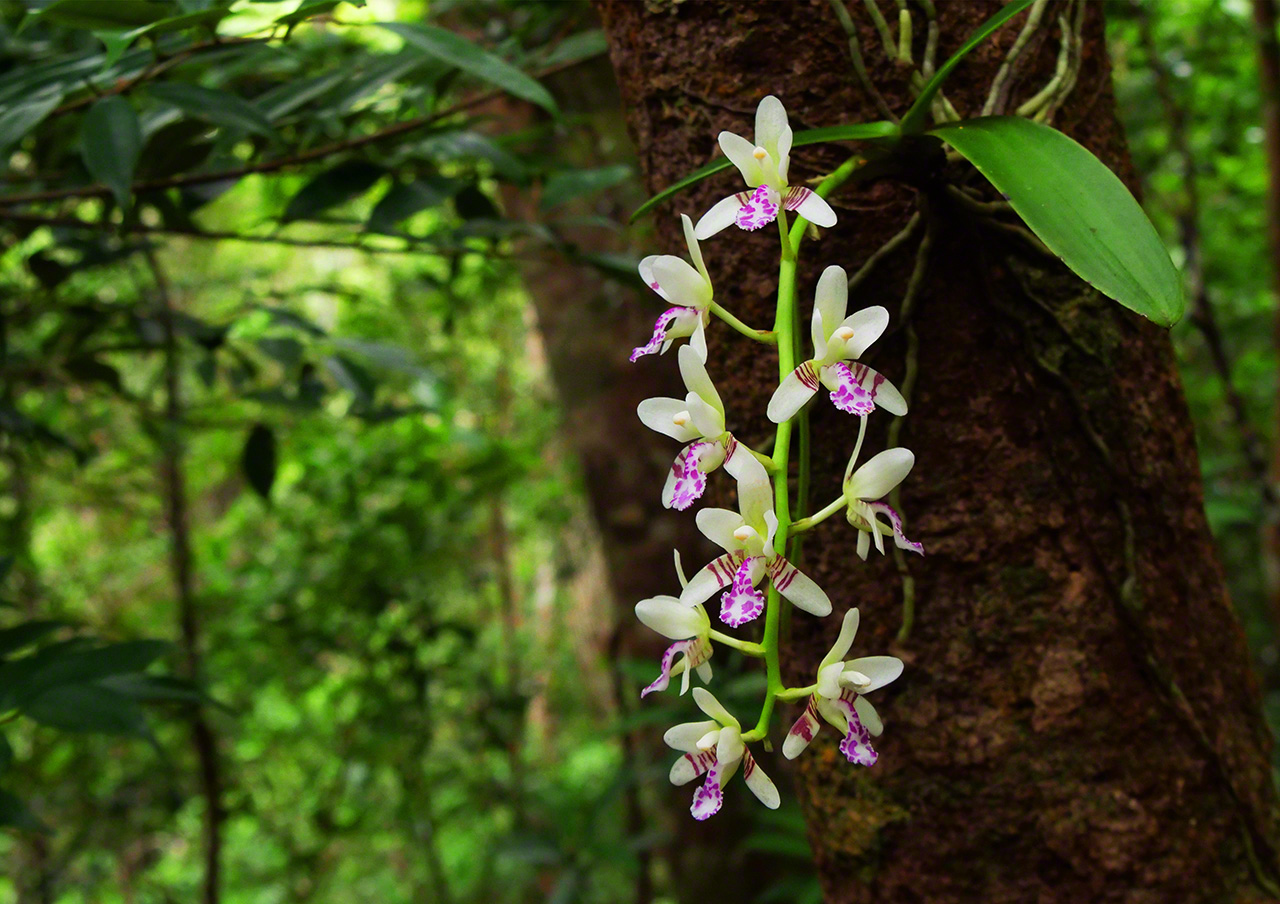 A Sedirea japonica blooms in the forest. Although the species of orchid is named for Nago in Okinawa, where it was first identified, it also thrives on Amami Ōshima and Tokunoshima. 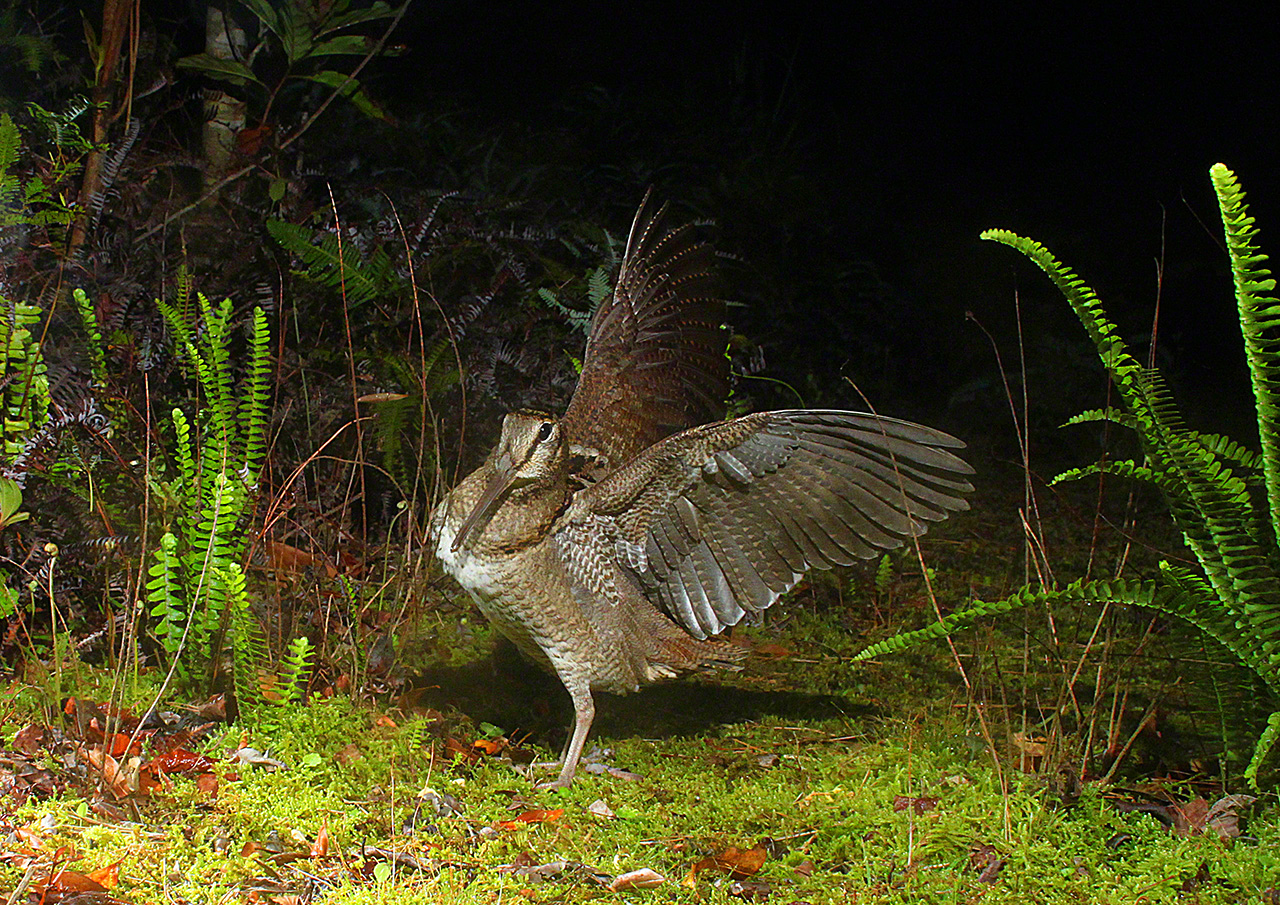 An Amami woodcock puts on a threat display. 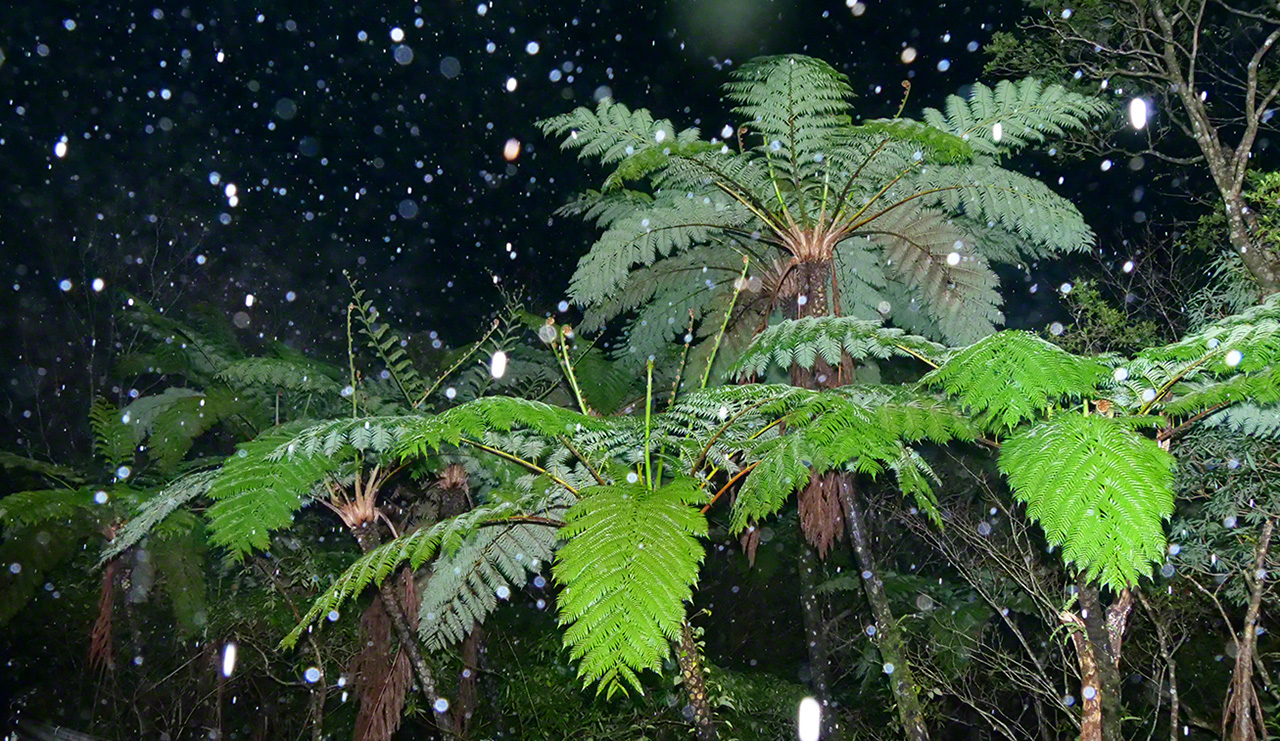 Snow falls on flying spider-monkey tree ferns at the top of Mount Yuwandake in January 2021. Such weather events are rare in the subtropics. 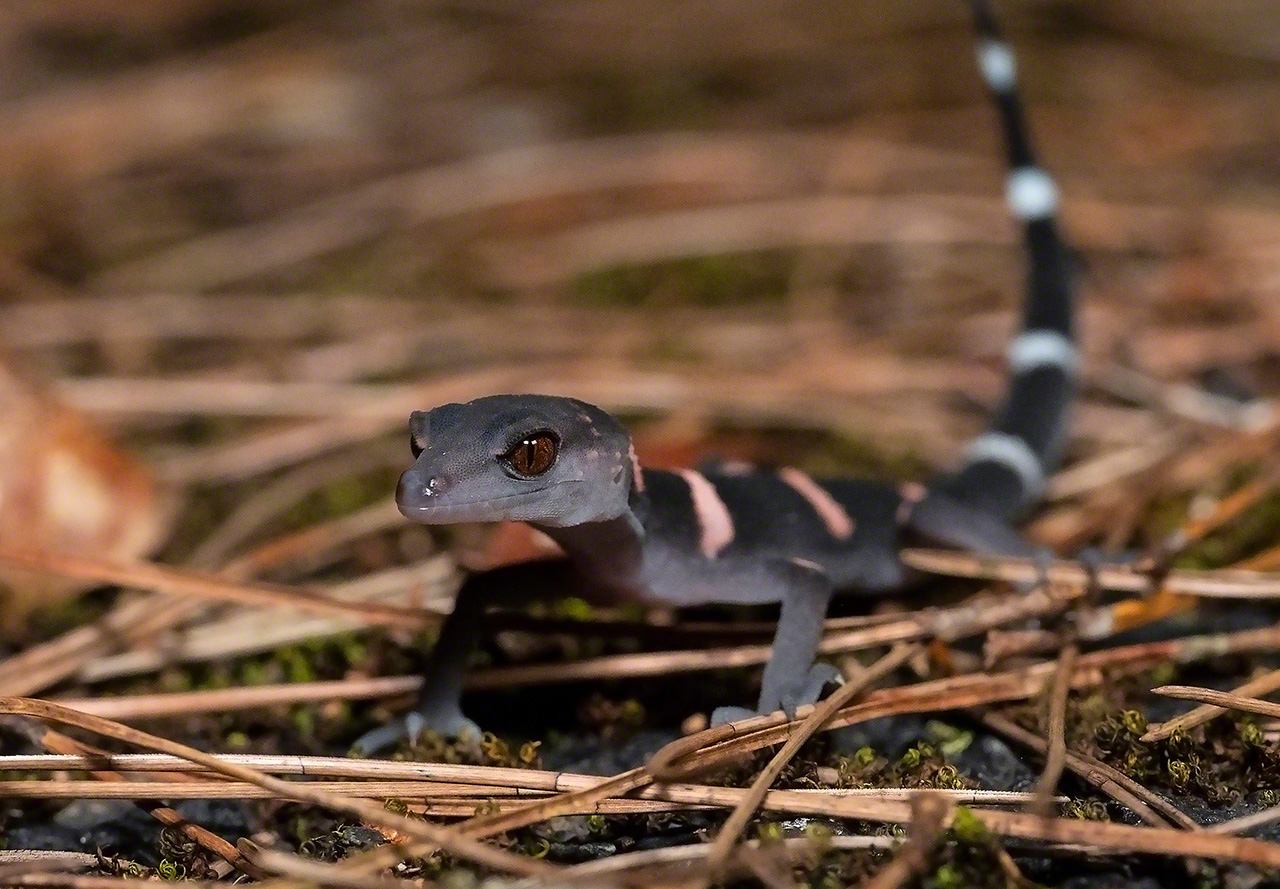 A banded ground gecko. Endemic to Tokunoshima, the lizard is characterized by its brilliant pink and white stripes. 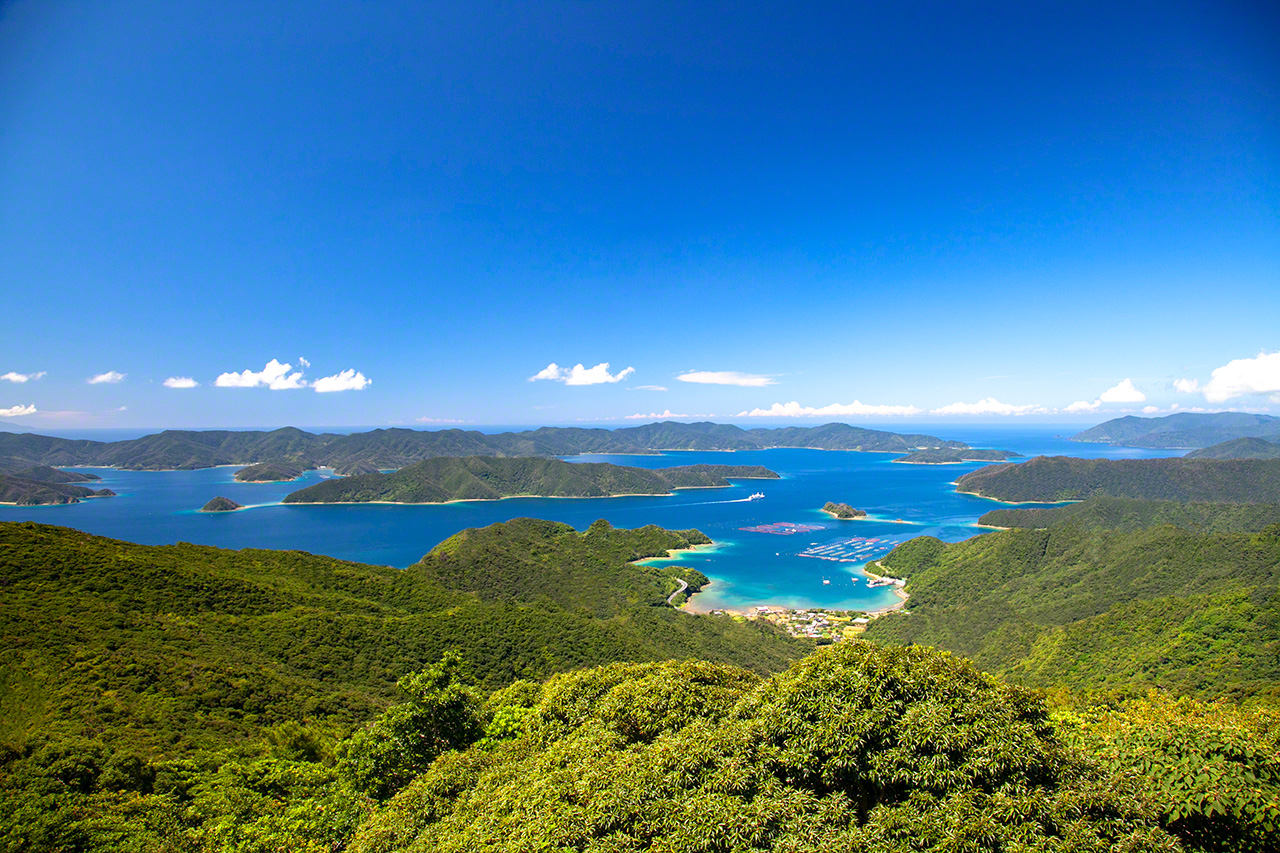 Looking south from Amami Ōshima toward Kakeromajima, Ukejima, Yorojima, and other islands in the Amami archipelago.

The islands are part of the Amami archipelago and set between 370 and 560 kilometers south of the prefectural capital of Kagoshima. Amami Ōshima, the larger of the two, is 812.35 square kilometers, while Tokunoshima is 247.85 square kilometers. Lying in the subtropics, they receive some 3,000 millimeters of rain per year, which helps them to sustain an abundance of plants and wildlife.

(Originally published in Japanese. Banner photo: The indented coast of the Nishibaru Peninsula on the northern end of Amami Ōshima is home to corals and deep forest. All photos © Hamada Futoshi.)