The Value of a Vote and the Bicameral System

Politics Society Jul 2, 2015
The House of Councillors is currently in a state of unconstitutionality, and unless sweeping reforms are enacted quickly, next summer’s election will no doubt be judged to be unconstitutional.

Time Is Running Out

The deadline for reforming the House of Councillors’ electoral system is fast approaching. To redraw electoral district boundaries and eliminate the state of unconstitutionality—as ruled by the Supreme Court—in time for next summer’s upper house election, the Public Offices Election Act must be revised during the current Diet session. Prospects do not appear bright, however, as the effort to draft a reform bill is being thwarted by upper house members of the ruling Liberal Democratic Party.

The state of unconstitutionality refers to the disparity in the weight of one vote. Of the 242 upper house seats, 96 are elected through proportional representation, so there is no disparity in the number of votes per seat. The problem stems from the remaining 146 seats that are chosen from the 47 prefectural districts. In the last upper house contest in 2013, the weight of a vote in the least populated constituency was 4.77 times that in the most populous district; in the preceding 2010 election, the disparity was as wide as 5 times.

The Supreme Court also noted that there are limits to correcting the vote-value disparity by adjusting the number of seats among the existing prefectural constituencies, and it ordered the reexamination of the very structure of the current electoral system.

This call for a sweeping overhaul of the electoral system was first made by the court six years ago in the September 2009 judgment of the Grand Bench concerning the 2007 upper house election, when the gap broadened to 4.86. The verdict served to allot the Diet “homework” to avert a future unconstitutional ruling. 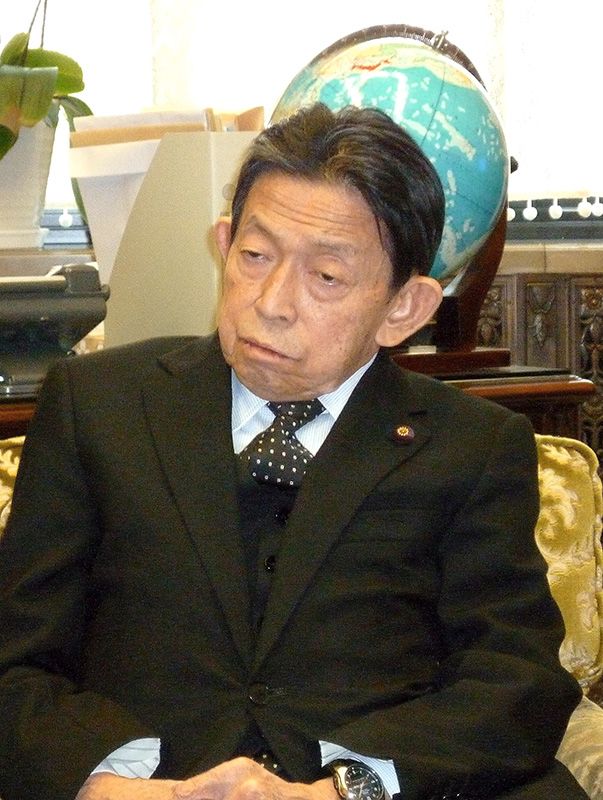 Nishioka Takeo, then president of the House of Councillors. Photograph taken in February 2011.

Nishioka Takeo, who served as upper house president from July 2010 to November 2011, took this warning to heart and drafted a plan eliminating the prefectural constituencies and having all members elected through proportional representation from nine regional blocks.

He later amended his plan, converting the nine proportional-representation blocks into nine massive electoral districts, but under either plan, the vote disparity would have narrowed to around 1.1. Although this would have effectively eliminated any disparities in voting power, both the ruling and opposition parties rejected it, and it eventually faded from serious consideration with Nishioka’s death in 2011.

The Supreme Court’s Grand Bench reiterated the warning in its October 2012 verdict on the 2010 upper house election. Rather than heed the call for sweeping changes, though, the Diet made minor revisions to the Public Offices Election Act the following month, adding 4 seats in densely populated constituencies (2 each in Osaka and Kanagawa) and eliminating 4 from districts with few voters (2 each from Gifu and Fukushima).

Recognizing the fact that this is not what the top court called for, the amendment’s authors added a supplementary provision indicating that discussions on fundamentally rectifying the imbalances in the prefectural constituencies would continue, with a conclusion to be reached before the 2016 upper house election.

This was, in effect, the Diet’s pledge that it would overhaul the upper house’s electoral system in time for next summer’s ballot.

Spearheading the reform effort was Waki Masashi, then secretary general for the LDP’s upper house members, who chaired the council on the chamber’s electoral system under house president Yamazaki Masaaki. His proposal left the proportional representation seats intact and redrew the electoral districts so that sparsely populated prefectures were merged with neighboring constituencies.

The plan created 11 such amalgamated districts involving 22 prefectures, combining, for example, Tottori with Shimane and Wakayama with Osaka to narrow the voter disparity to less than 2. In the face vehement opposition, though, he was forced to backtrack and reduce the number of combined districts to 5, leaving a gap of 2.84. Still, the proposal met fierce resistance from his LDP upper house colleagues, culminating in Waki’s ouster as chair of the electoral reform council in September 2014. The reform process was back to square one.

The latest proposal submitted by LDP upper house members kept the prefectural districts intact and reapportioned 6 seats, adding 2 each to Hokkaidō, Tokyo, and Hyōgo and likewise subtracting 2 from Miyagi, Niigata, and Nagano, leaving a disparity of 4.31. With this plan, upper house elections would still be in a state of unconstitutionality, so naturally it was roundly criticized by the opposition and even coalition partner Kōmeitō. Prospects of reforms being enacted during the current Diet session are not very encouraging.

Such negligence and lack of sincerity are all the more appalling in the light of the efforts being made by the House of Representatives, which has entrusted the task of reforming its single-seat constituencies to a third-party panel chaired by former University of Tokyo President Sasaki Takeshi.

Partly to blame for the House of Councillors’ half-hearted reform initiatives may be the Supreme Court’s recurrent lenience toward the chamber.

The first voting inequality lawsuit to be filed was over the 1962 upper house election. It was brought by a judicial apprentice who, inspired by a US Supreme Court decision on the constitutional guarantee of “one person, one vote,” argued for the nullification of the election, pointing to the fact that voters in Tottori had four times the voting clout of their Tokyo counterparts.

The Supreme Court’s first unconstitutional ruling was not over an upper house election but the lower house contest of 1972, in which the maximum voter disparity (among medium-sized constituencies) was 4.99. The reason for avoiding a ruling on the upper house was in deference to its unique electoral structure, in which half the members are elected every three years to serve six-year terms. This means that an even number of seats must be allocated to each prefectural constituency, hindering efforts to alleviate the imbalances.

Additional factors include the fact that the disparity was already 2.62 when the House of Councillors was established following World War II (much higher than the 1.51 for House of Representatives) and that while the Public Offices Election Act requires redistricting or reapportionment of seats according to national census figures for the lower house, it has no corresponding provisions for the upper house.

Thus even as measures were being taken to rectify unconstitutional inequalities in the lower house, the Supreme Court continued to affirm the constitutionality of upper house ballots despite the absence of reforms.

This trend came to an end, though, with the emergence of “inverted districts,” where a less populated constituency claimed more seats than one with a larger number of voters. This was the result of people migrating to urban areas, and the Supreme Court could no longer justify the constitutionality of such a phenomenon.

In a first, the court ruled that the 1992 upper house election, in which inverted districts appeared and which was marked by a disparity of 6.59, was in a state of unconstitutionality. But then it reverted to endorsing subsequent election results following the elimination of inverted districts, even when the gap remained at around 5.

Sterner Demands by the Supreme Court

The court’s attitude changed when Takesaki Hironobu became the chief justice. Even while upholding the constitutionality of the 2007 election, the verdict on that contest called for the overhaul of the electoral system itself. The ruling on the 2010 ballot noted that the results were in a state of unconstitutionality, which was followed with a similar decision regarding the 2013 election results.

The November 2014 decision of the Grand Bench regarding the 2013 election noted the importance of considering the institutional and social changes that have taken place over the six-plus decades since the House of Councillors election system was established. Specifically, it cited the fact that (1) elections to both houses have become party-centered, (2) the two houses now have similar systems combining electoral districts and proportional representation, (3) the role of the upper house in the management of state affairs has increased, and (4) a vote-value disparity of less than 2 has been prescribed for the lower house.

It added that there are no justifications for automatically assuming that an upper house election need not meet the requirements for equality in voting power. There was no reason, in other words, for leniency toward the upper house regarding voting disparities.

It further commented that there are no constitutional requirements for prefectures to serve as electoral units and made a renewed call for a reexamination of the entire system, rather than limiting reforms to a reapportionment of 6 or so seats among prefectural districts.

The Need for Sweeping Reforms

Also noteworthy about last year’s decision was that 4 of the 15 justices ruled that election results were outright unconstitutional. And 5 of those who sided with the majority view issued a joint supplementary opinion noting the urgent need to build an electoral system that dissolves the state of unconstitutionality and properly reflects the will of the people. In addition, it strongly sought prompt legislative measures to reform the very framework of the existing electoral system.

In the light of such opinion, should the legislature limit its effort to a minor reapportionment of a just few seats, those 5 justices can, at the very least, be expected to join those who issued an unconstitutional verdict.

The Supreme Court, under Article 81 of the Constitution, has the “power to determine the constitutionality of any law, order, regulation or official act,” while members of the Diet are obliged, according to Article 99 to “respect and uphold this Constitution.” Upper house proponents of minor reapportionment are urged to reread the Constitution. Otherwise, they will only give momentum to voices calling for the elimination of the upper house altogether.

(Originally written in Japanese and published on June 9, 2015. Banner photo: Masunaga Hidetoshi, the lead attorney in the lawsuit against upper house voting inequalities, speaks with reporters on November 26, 2014 after the Grand Bench ruled that the results of the 2013 election were in a state of unconstitutionality. @ Jiji.)