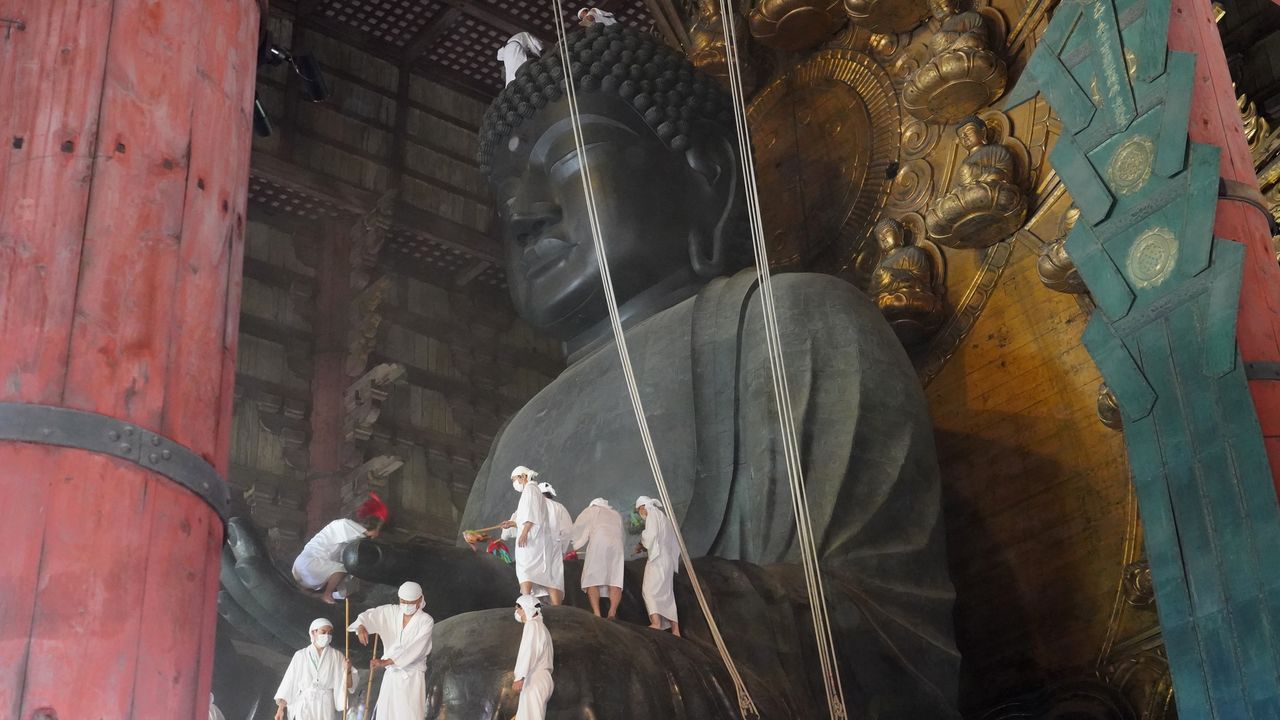 Forgotten Lessons of Past Diseases Lead to Fresh Threats

Society History Health Apr 15, 2020
Throughout history, the Japanese have suffered numerous times from epidemics. In recent times they seem to have forgotten about the threat diseases can pose, though, finding it hard to imagine that the COVID-19 outbreak could lead to a declaration of emergency in their own country. Japan’s highly urban and graying population presents ideal conditions for pathogenic viruses; we must not let down our guard.

Praying for an Early End to the Epidemic

At the famous temple Tōdaiji, home to the Great Buddha of Nara, priests have been offering prayers for the early end of the novel coronavirus pandemic every day at noon in the Great Buddha Hall since the beginning of April.

Around 1,300 years ago, at the time Emperor Shōmu ordered the construction of the Great Buddha, Japan was swept by an epidemic that followed a great earthquake and famine. The disease was smallpox, one of the most horrible viruses humanity has ever faced. This illness produces a strong fever and a high death rate, while leaving the survivors pockmarked.

The disease, said to have been transmitted from an envoy to the kingdom of Silla on the Korean peninsula, spread throughout the capital, Heijō-kyō (now part of Nara), causing great panic in the imperial court and killing all four brothers of the powerful Fujiwara clan. While it raged through Japan in 735–37, the epidemic is thought to have taken the lives of 1 million to 1.5 million people, roughly 25% to 35% of the population at the time.

Reeling from this wave of disasters, Emperor Shōmu ordered the construction of the Great Buddha in the year 743, with the hope of securing the wellbeing of the state and saving people from illness.

In 2019 the new Reiwa era began upon the ascension of Emperor Naruhito to the imperial throne—the first time in centuries for this to take place as a result of an abdication, rather than the death of the previous emperor. Many changes of era names in the past, though, have been related to the outbreak of diseases. In total, there have been 248 era names, starting with the first era name, Taika, in the year 645. In the modern era, Japan has had just one era name per imperial reign, but historically a single emperor was likely to sit on the throne during several newly named eras. In over 100 cases, new era names were coined in the wake of a natural disaster, war, epidemic, or some other great calamity, as a way to break with that tragic past and hopefully bring about better times. In contrast, the era names that arrived with the ascension of a new emperor only number 74.

Around 30 of those calamity-based name changes, roughly a third, were due to deadly epidemics. Smallpox was the disease that struck most often, followed by the measles, whose symptoms were a high fever and full-body rash. At the time, when so many people died of diseases whose causes were unknown and for which no treatment was available, Japanese could only respond with prayer and changes to the era name.

The Japanese custom of Setsubun, where people throw beans to drive oni (ogres) from the home, is linked to infectious diseases. Throwing beans started in the early fifteenth century, during the Muromachi period (1336–1573). The ogres embodied the terrifying, invisible threats that people faced, which is to say, epidemics, natural disasters, and the like. Some explanations say that the red faces of ogres signify a person with a high fever from an infectious disease such as smallpox.

As part of the Setsubun activities, sardine heads and holly leaves were traditionally placed at the entrance of homes to ward off the ogres, who are said to detest those things. Japanese families repeat these customs every year in the hope of driving away the evil-causing spirits and staying healthy.

Everyone’s wish was for epidemics to be dispersed. That desire is also at the origin of the Sumida River Fireworks Festival that lights up the evening sky in Tokyo every summer. In 1733, the eighth shōgun of the Tokugawa regime, Yoshimune (1684–1751), commissioned a fireworks display on the first day of the annual summer festival to open the Sumida River, held at Ryōgoku. This was to honor those who had died from the famine and plague devastating the city of Edo and pray for an end to those calamities. Today, sadly, the 2020 fireworks display has been canceled due to the outbreak of COVID-19. 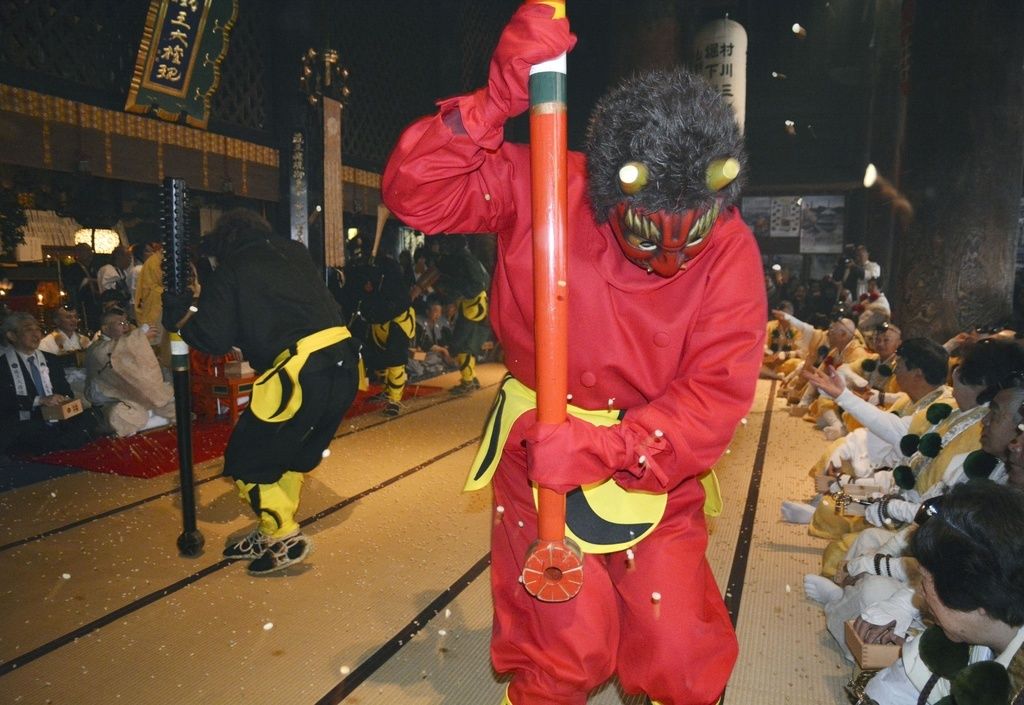 Yamabushi priests and others throwing beans at a Setsubun event at the Zaō-dō hall in Kinpunsen-ji, a World Heritage temple. (© Kyōdō)

Disaster Strikes Once People Let Their Guard Down

The festivals and traditions carried out in antiquity to ward off diseases have been passed down at the temples and shrines throughout the country. But even though the threat of epidemics has been such a pressing problem for Japan over the centuries, until the recent outbreak of COVID-19 this danger appears to have been largely forgotten.

“An epidemic and a major earthquake are quite similar,” explains Ishi Hiroyoki, a 79-year-old environmental journalist and author of Kansenshō no sekaishi (A World History of Infectious Diseases). “Even if people know that such disasters will periodically strike, they don’t know when or where. As the physicist and essayist Terada Torahiko famously wrote, ‘a natural disaster strikes the moment you forget about it.’ As long as we continue to live on this planet, there’s no escaping from earthquakes and epidemics.” 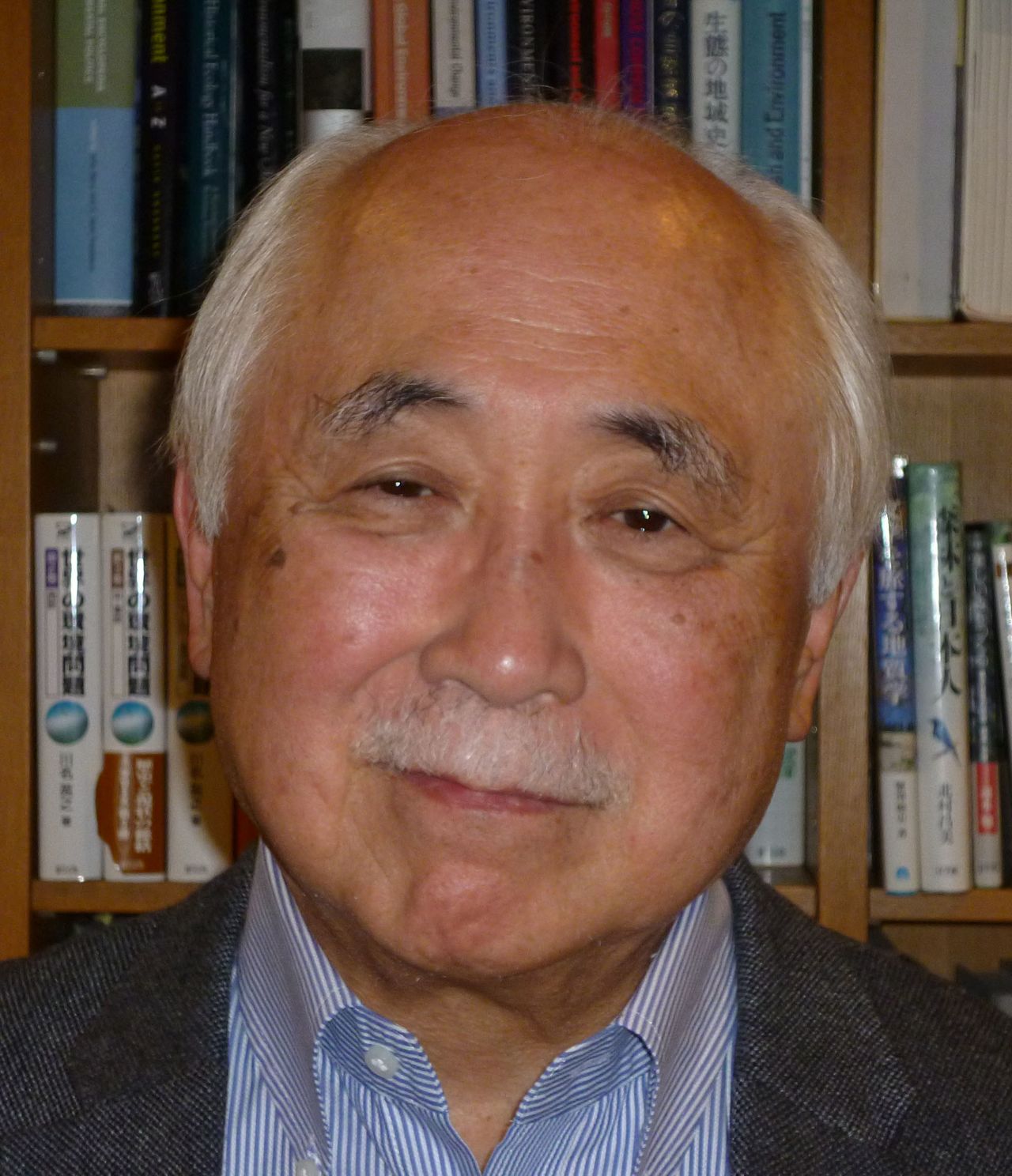 One recent domestic disease outbreak occurred in the summer of 2014. A man bitten by a mosquito in Yoyogi Park in Tokyo was afflicted with a high fever and pain all over his body that turned out to be the result of dengue fever. The disease, more common to hot climates in southeast Asia, had spread in Japan during World War II, when the mosquitoes carrying it were brought back to the country from the southern battlefields. But for the next 70 years no domestic cases had occurred.

The number of cases of dengue fever increased over a two-month period that year to a total of 160 patients before coming to an end. The impossibility of preventing infectious diseases from entering Japan from other countries was illustrated well by this outbreak: There are no borders that can keep out insects.

Prior to the current outbreak of COVID-19, the world was struck by large-scale outbreaks of two other coronavirus diseases—SARS (severe acute respiratory syndrome) in 2002–3 and MERS (Middle East respiratory syndrome) in 2012—but neither had much impact in Japan. Given that past good fortune, the careless attitude prevailed at first in Japan that the explosive outbreak of COVID-19 in China would not be a problem domestically.

“Japan did not learn much from past epidemics, so there is has little experience to apply to the current crisis,” Ishi points out. That lack of experience was manifested in the response of Japan to the outbreak of COVID-19 aboard the Diamond Princess cruise ship. Despite the 110 cases of group infections aboard cruise ships over the past decade, Japan showed little sense of caution about the possibility for disease to spread aboard such ships. 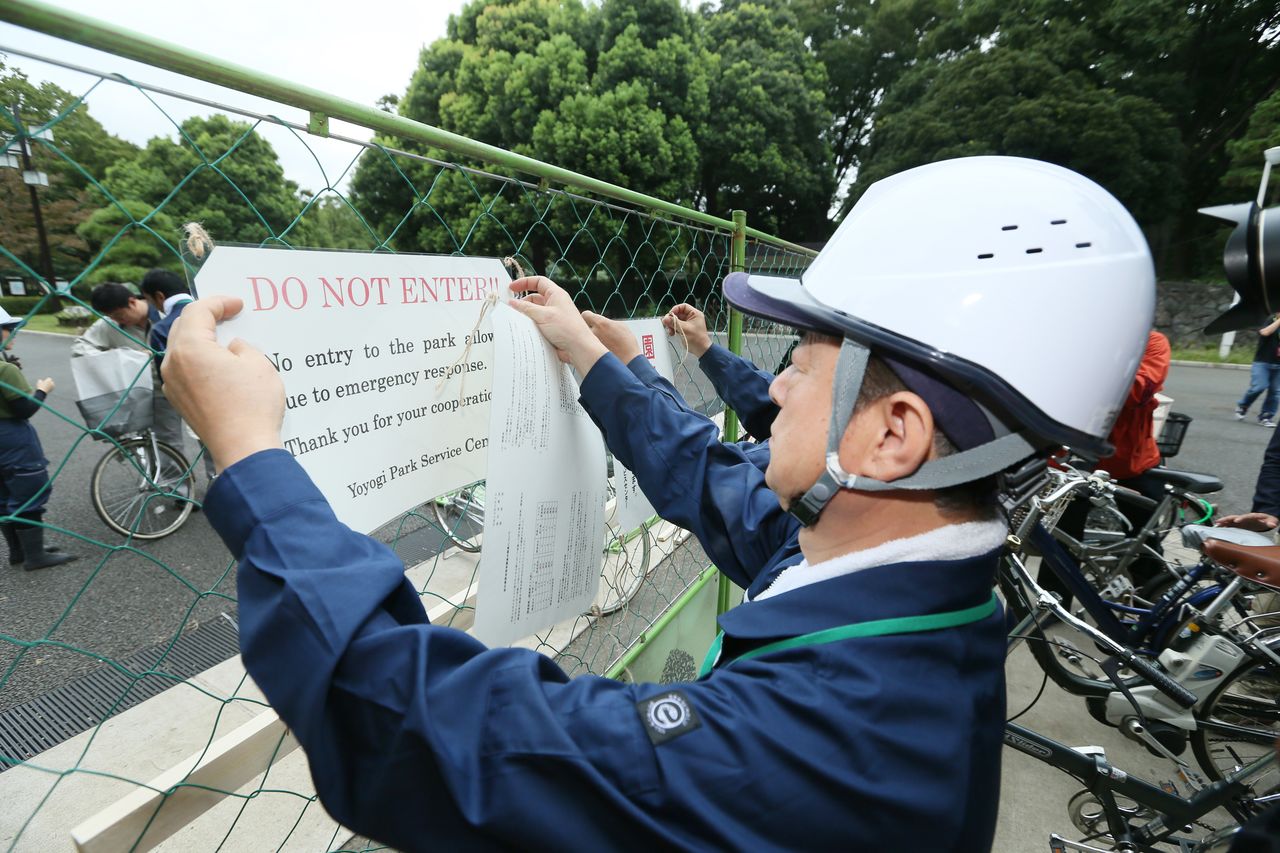 Yoyogi Park staff post notices on September 4, 2014, indicating the temporary closure of the Tokyo park after the detection of mosquitos carrying the dengue virus. (© Jiji)

The government, with an eye to the Tokyo Olympics and Paralympics, had been aiming to turn Japan into a top tourist destination, setting the goal of 40 million overseas visitors per year. This trend naturally raised the risk of infectious diseases being brought into the country.

Despite that risk, the budget and personnel for the National Institute of Infectious Diseases was steadily reduced over the past 10 years. The NIID is staffed with around 300 people and has an annual budget of around ¥8 billion. Contrast that with the Centers for Disease Control and Prevention in the United States. The CDC has roughly 11,000 staff members and a budget equivalent to over ¥800 billion to support its broad-ranging activities, which include gathering information, informing the public, and conducting quarantines.

The NIID does not have the capability to widely test people for COVID-19 in a short period of time, which the current situation requires. Numerous experts in Japan are calling for the rapid creation of a new organization with the personnel and resources needed to coordinate Japan’s epidemic crisis responses.

As noted in a previous article, the concentration and overcrowding of populations due to urbanization has fueled the rapid increase in infectious disease outbreaks. This concentration of people can be seen in Japan’s megacities like Tokyo and Osaka. In addition, the country is burdened with one of the oldest populations in the world. The outbreak of COVID-19 has made clear once again that elderly persons are particularly vulnerable to pathogenic viruses.

“Human beings have created environments conducive to the spread of diseases in the past as well,” warns Ishi. “But the unparallel combination of a highly concentrated populations and an aging society in Japan has created a hotbed for disease outbreaks.”

One shudders to imagine the consequences if a major natural disaster of the sort forecast for Japan’s near future were to coincide with a deadly epidemic. There are many challenges that the Japanese will have to face in order to safeguard their society.

(Originally published in Japanese. Banner photo: Buddhist monks and laypersons dressed in white costumes wipe off the dust accumulated on the Great Buddha of Nara over the previous year on August 7, 2019. © Jiji.)