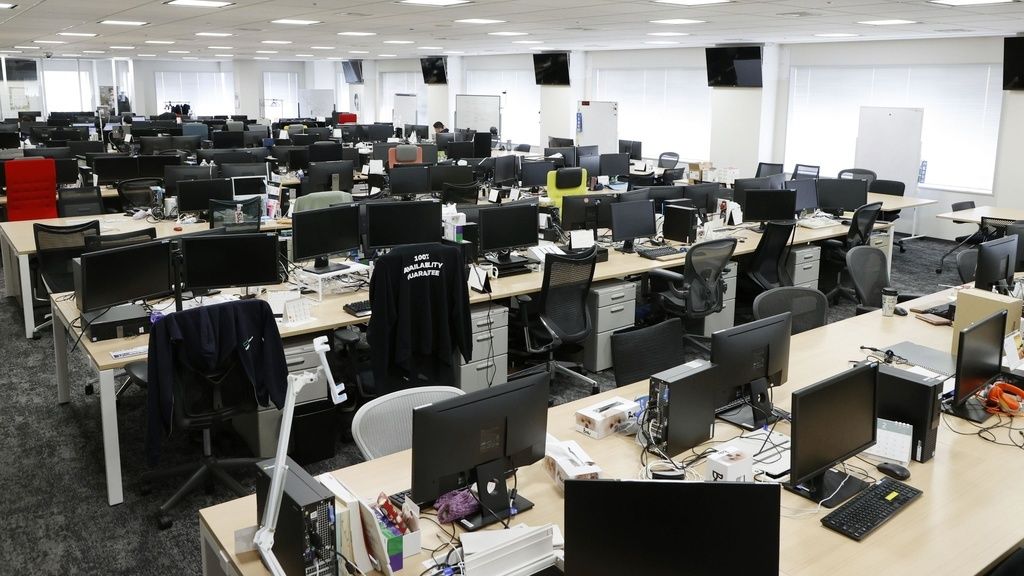 Why Japan Still Lags in Work from Home, Even During the Pandemic

Work Economy Health Society Oct 8, 2021
The Japanese government declared its first COVID-19 state of emergency in April 2020. This drove a rapid shift toward working from home, but the trend did not last. Japan’s reluctance to adopt telework in comparison with other advanced nations largely comes down to the systematic structures underlying the country’s working style.

Teleworking and Working Hours During the Pandemic

Keiō University’s Panel Data Research Center has been tracking household trends around Japan through the ongoing Japan Household Panel Survey. The survey shows that in February 2020, just before the pandemic struck in earnest, only about 6% of workers between the ages of 20 and 70 telecommuted, but in April 2020, after the first emergency declaration, about 25% were.

Although the shift to telework was done largely to comply with governmental demands to counter the spread of infection, in larger terms of working-style reforms, it also aligned with current global trends toward more flexibility in where and when people work.

Furthermore, with the pandemic driving an economic recession, working hours shortened. According to the Japan Household Panel Survey, the percentage of those working 60 hours a week or longer dropped significantly, from about 7% in February 2020 to about 4% in April 2020. One interpretation is that the pandemic has offered a correction to the overworking trend in Japan, increasing flexibility and making it easier to achieve better work-life balance.

However, the trends that have followed suggest that these changes have not necessarily taken root, and they may indeed be quite short-lived. After the first SOE declaration ended, companies and employees showed a clear trend in returning to in-office work, and as of September 2020 the rate of employees working from home had fallen to 15%, while the rate of those working 60 hours or more had risen once more to around 6%.

The situation since has remained relatively stable, although there have been some minor fluctuations depending on the rate of new infections and related SOE declarations. In other words, while telecommuting has become more widespread and working hours have shortened somewhat compared to before the pandemic, the degree of change since the summer of 2020 has been limited.

Reasons for the Lag?

Why have telework rates in Japan not really expanded, except during the first state of emergency declared in April 2020? Commonly cited reasons include the lack of widespread adoption of limited-duty job-based employment, the difficulty that telework causes in communication with colleagues and business partners, and the lack of computer and communication equipment or operational regulations for telecommuting.

However, I believe there are two underlying reasons for all of these: The characteristics of work in Japan mean that few tasks are nonroutine and intellectual in nature, so that many workers engage in routine or physical tasks; and Japan lags behind the rest of the world in digitization and the use of information and communication technology.

“Tasks” here refers specifically to the content of the work to be performed. Particular attention should be paid here to those categorized as “abstract tasks,” which are nonroutine and involve considerable analysis or interaction (work that requires planning, analysis, and communication). When working from home, these abstract tasks are easier to carry out smoothly than repetitive, routine office work or tasks that involve physical labor.

The difference in Japan’s rates can be seen in the figure below, which compares telework rates and abstract task scopes internationally. The horizontal axis of the figure shows national rates of telework adoption taken from the Nomura Research Institute’s “International comparative survey of living conditions amid the COVID-19 pandemic,” an eight-nation survey conducted in July 2020. The horizontal axis displays the level of abstract tasks per nation based on the Organization for Economic Cooperation and Development’s Program for the International Assessment of Adult Competencies survey (blue), as identified in the report Differences in Job De-Routinization in OECD Countries: Evidence from PIAAC by Sara de la Rica and Lucas Gortazar, February 2016; and the ICT use frequency in work (orange). 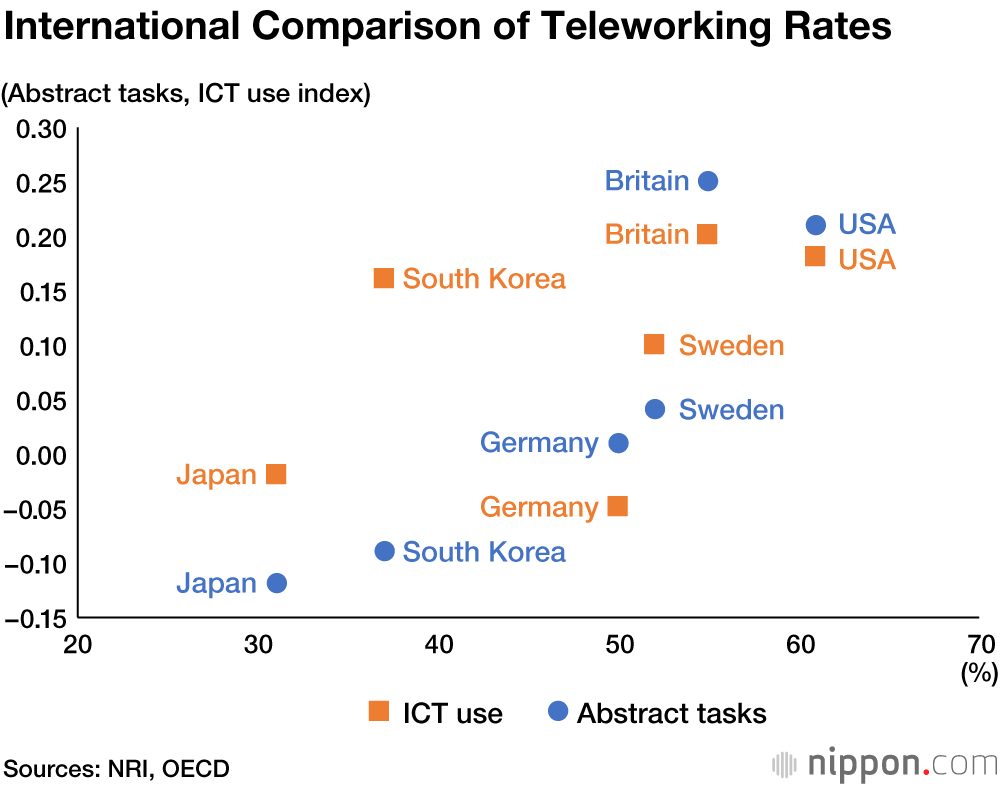 The subject and time periods differ, but the Japan Household Panel Survey mentioned previously shows that Japan’s telecommuting rate, indicated by the blue dot on the chart, is still the lowest in the world. At 30%, it was half the global leader United States’ rate of 60%. Another point worth considering is that those countries with high telework rates tend also to have a higher level of abstract task work, and Japan’s is the lowest in that measure, as well.

The red dots in the figure show the level of ICT use in each country in relation to the telecommuting rate, and while countries with higher rates of telecommuting also have higher ICT use, Japan’s ICT use is considerably lower than that of other countries.

In other words, Japan’s workers have a lower rate of abstract tasks than those of other nations, and their work also requires less use of ICT. Those two factors result in a bottleneck in increasing telework adoption.

No Transition to ICT or Automation

If more routine or physically demanding tasks are delegated to computer or robotic automation, while industries move toward service-based work or high-precision manufacturing, there will be more abstract tasks for workers. With more abstract tasks, there should be fewer obstacles for employees to use PCs or online communication to work from home.

One could argue that one reason Japan has not followed that route, while other nations have, is that even when ICT became available from the 1990s, Japan’s lifetime-employment style “membership-based employment model” workplaces did not lay off regular employees and replace them with automation because of the high variety of their duties. Another argument is that once a labor force of nonregular employees became readily available, more of those routine and physical tasks were delegated to those cheaper workers.

Thus, the labor market structure itself has hindered the spread of telecommuting in favor of “work at work” during the pandemic, which itself has contributed to the further spread of COVID-19, as well as holding back progress in work-style reform toward more flexibility. To overcome this situation, business itself has to change, not only through digitization and ICT use, but also by introducing new technologies like artificial intelligence and the internet of things, as well as more robot use.

The limited spread of telework in Japan is creating a work-style disparity between those workers who can work in a flexible and healthy manner, and everyone else. In fact, according to the Japan Household Panel Survey, comparing the telecommuting rate by income group from February 2020 to April 2021 shows that the rate among the top 20% of earners rose significantly, from 7% to 31%, while the rate among the bottom 20% rose only slightly, from 6% to 8%.

A similar trend applies to improvements in long working hours, with the percentage of those working 60 hours or more per week decreasing significantly for higher income groups. In addition, the high-income group doubled their time spent learning skills, while the middle- and low-income groups remained unchanged.

We can understand these changes as an emerging disparity in resilience to crisis, or a “resilience gap.” For example, working from home and working shorter hours increases resilience because it allows people to continue working in the face of major events, such as the spread of infectious diseases, disasters, or requirements for family medical or nursing care. Having time for learning also offers a chance at adaptation when skill requirements change due to developments like rapid technological innovation. Pandemic-driven changes may increase this new resilience gap, which is something we would do well to remember.

Such disparities are more difficult to grasp than traditional income disparities, and even when authorities do grasp them, there are few ways to offer correction via policy measures. Without strong policy measures like income redistribution to correct disparities, it will be important for individual workers and companies to take fine-grained, voluntary action to reform their own work styles.

(Originally published in Japanese. Banner photo: Inside an IT company where most employees are now working from home in an effort to prevent the spread of COVID-19. © Kyōdō.)