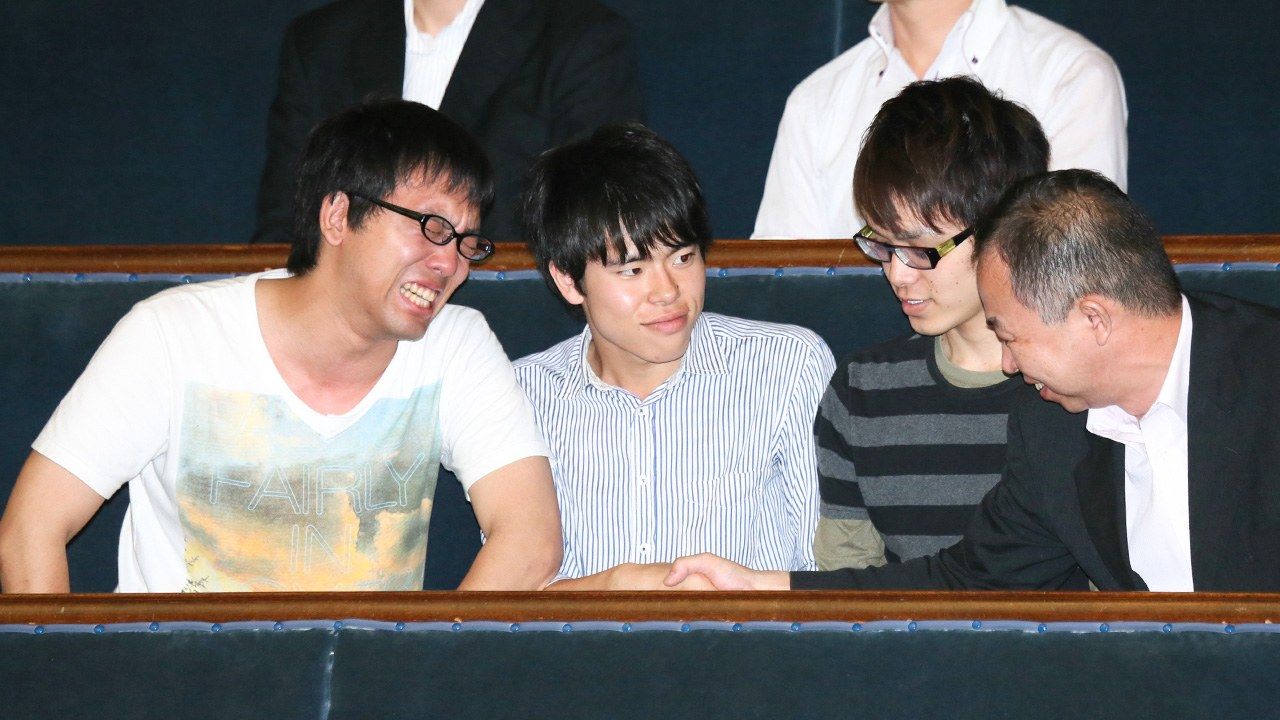 Society Economy Dec 20, 2019
Children in single-parent households are often financially disadvantaged. In Japan, divorce is no longer a rarity, but due to the country’s peculiar two-tier wage structure, the poverty rate for single-parent families is the highest among all advanced nations.

Ōta Mayumi, a 38-year-old resident of the Tokyo suburb of Komae, says, “Before I got married I was doing well in my career, and I intended to go back to being a regular employee after my children were a bit older, to earn money to pay for their university education.” (The names of the women in this story have been changed to protect their privacy.) Some single mothers are forward-looking like her, but the reality is that most are stuck in low-wage, part-time jobs, with no prospects of ever becoming better-paid regular employees.

Other women in similar circumstances appeared in my previous article in this series. Tokyo metropolitan area resident Wakasa Ayaka, a single mother in her forties, had to get a job after her divorce, but her reduced earning capacity was a rude awakening. In good years, her former husband earned ¥6 million a year, but now that she’s on her own, her yearly salary from a part-time job in the social welfare field—including child welfare and child rearing allowances—is around ¥2.5 million.

She’s sure that she works just as hard, if not harder, than male university graduate regular employees, and she finds it hard to accept the wage gap at her workplace. She has thought of looking for a job as a regular employee, but her 14-year-old son is not attending school right now. He’s home by himself all day, and working as a regular employee would make it hard to suddenly take time off, so she gave up on that idea.

Yahagi Madoka, a woman in her thirties who has switched jobs frequently, works in the distribution industry. Right now, she has a job filling orders in a fulfillment center, but it is hard physical work, so she is thinking of changing jobs again. “I’ve never held a full-time regular employee job, so looking for that kind of employment is out of the question. I’ll look for another part-time job,” she says. Her daughter, age seven, will only be eligible for afterschool care for another year. She can’t afford to send her to afterschool academic coaching, and although it will mean a further drop in earnings, she will have to work fewer hours so that she can be home for her daughter after school. 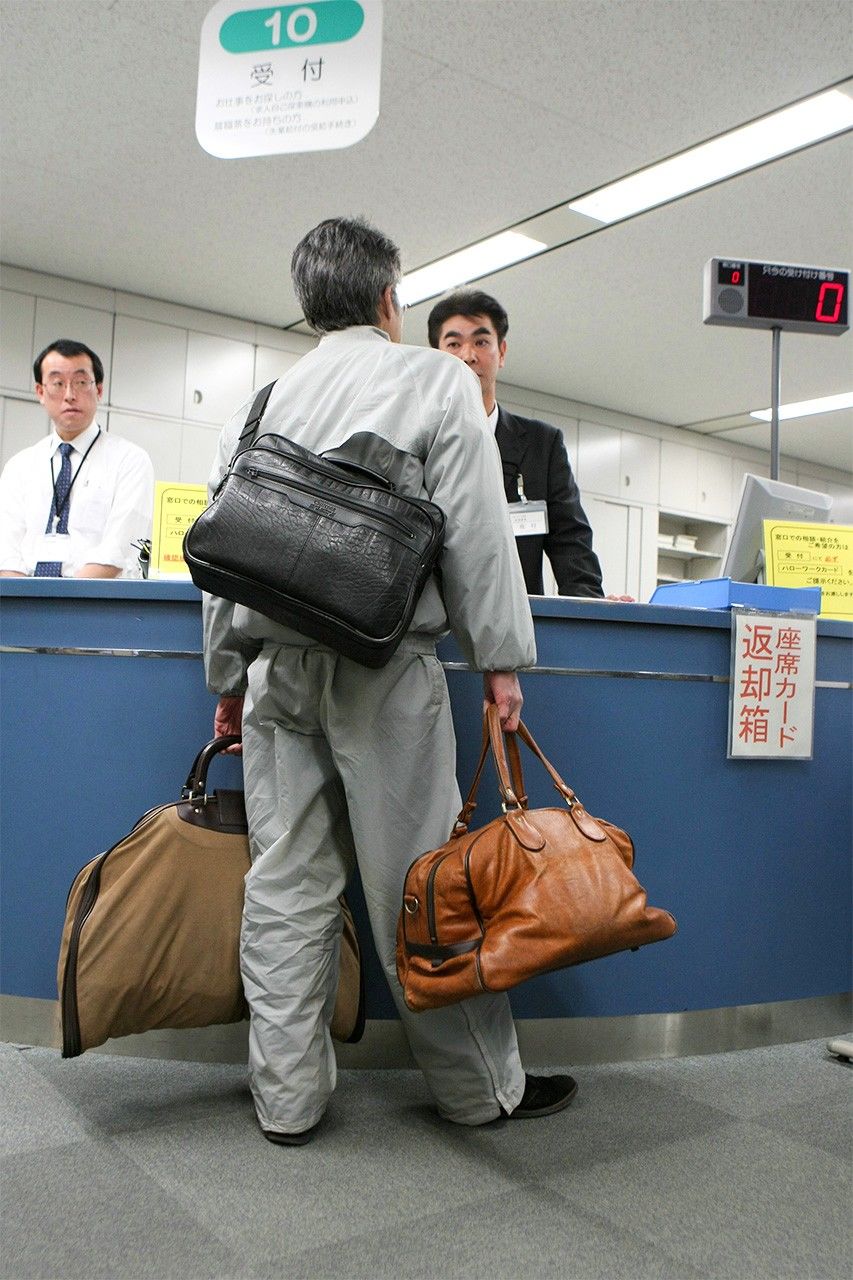 A job seeker visits a job center, seeking emergency help to make it through the yearend holidays, when jobs for day laborers are scarce. (© Jiji)

It is not only single mothers who struggle to provide for their children, though. As more men have had to make do with unstable, nonregular employment in the years since the so-called employment ice age from 1993 through about 2004 when, through no fault of their own, they did not make the cut and get hired as regular employees, more and more single-father families are just scraping by too. According to figures independently compiled by Abe Aya, a social sciences professor at Tokyo Metropolitan University, the poverty rate among single-father families, while lower than that for single-mother families, still stood at a relatively high 22.4%.

Single fathers are also making themselves heard. Murakami Yoshinobu, head of a single fathers’ support group started in 2008, says, “Given the increasing number of people in part-time, unstable employment and the 2008 global financial crisis, it doesn’t make sense any more to treat single-parent households differently depending on whether they are headed by men or by women.” His group’s representations with the authorities bore fruit: Single-father households have since 2010 been eligible for the child-rearing allowance, which had previously been paid only to single-mother households, as long as their annual income does not exceed a predetermined limit.

In a May 2014 speech, then US Ambassador to Japan Caroline Kennedy remarked that Japan was “the only country where having a job doesn't reduce the poverty rate.” In fact, in a 2014 OECD survey, the most recent for which comparative data is available, Japan ranked first among 33 countries in terms of relative poverty among single-parent households. According to this survey, although Japanese mothers’ labor participation rate is the world’s highest, the poverty rate for this group stands at 50.8%. 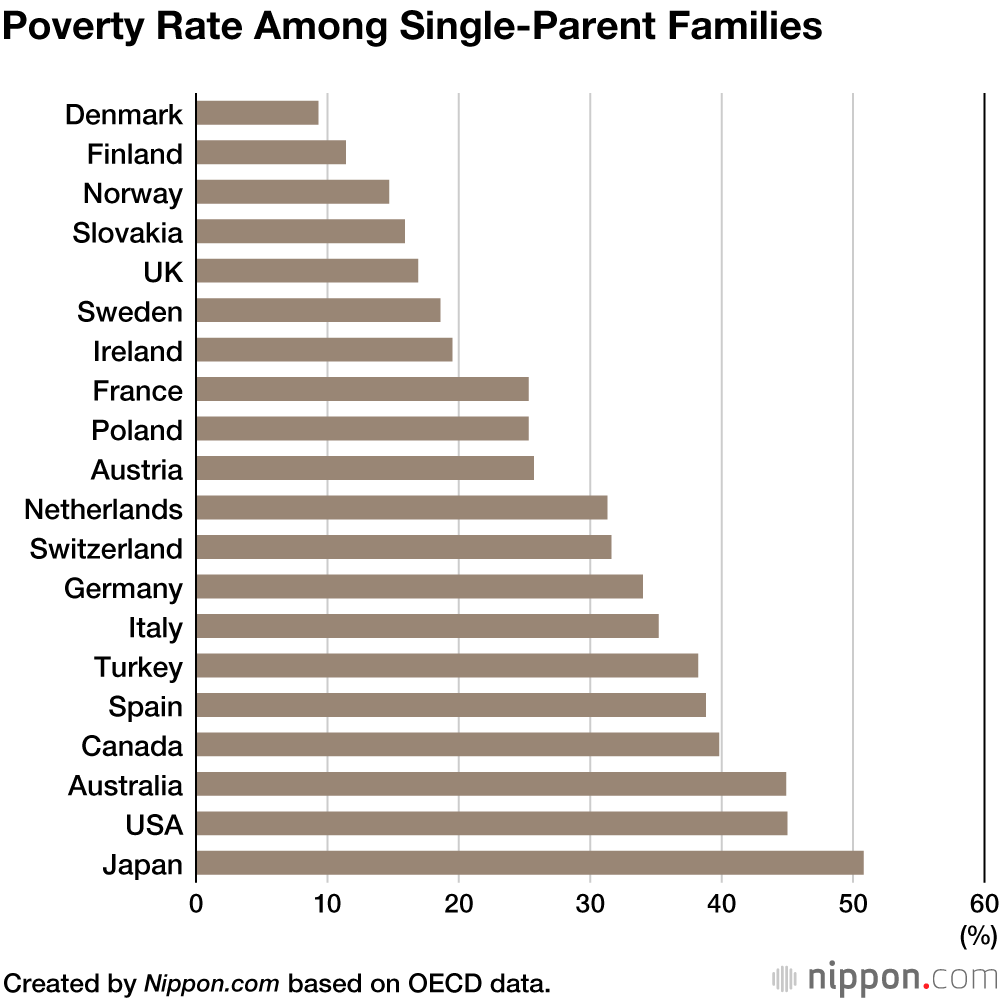 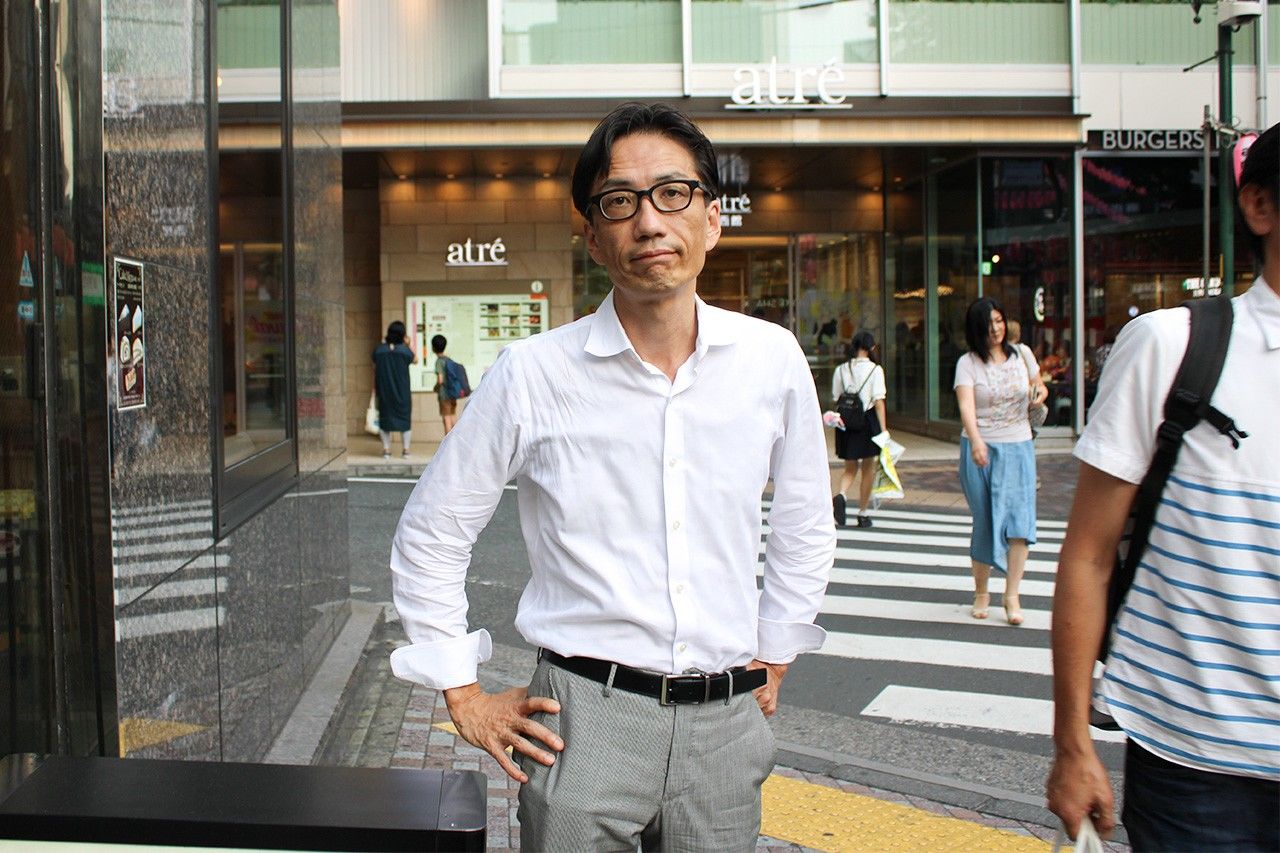 Yuasa Makoto is an academic also involved in children’s support.

In families where the breadwinner earns a 10, enough to support the entire family, his stay-at-home spouse earning a 4 for part-time work would have plenty of pocket money to spend on lunches with friends and on travel. Yuasa asserts that this kind of thinking is based on the economic model of Japan’s high economic growth years of the 1960s and 1970s, when lifetime employment for male breadwinners was the norm. But this model no longer works nowadays, when the family’s main wage earner may suddenly find himself out of a job due to downsizing or if a couple divorces and the woman is faced with the need to support herself and her children. No woman can support her family on part-time wages alone.

Meanwhile, in Europe the poverty rate among single-parent households is relatively low. According to Tokyo Metropolitan University’s Professor Abe, this is because unlike in Japan, in European markets occupation-based wages tend to be predetermined and there are no differences in hourly pay rates for the same work. Total wages per occupation may differ, but generally this varies only depending on the number of hours worked. A survey by the Japan Institute for Labor Policy and Training based on figures comparable with 2014 shows that when full-time workers wages are represented by 100, wage levels for part-time workers in Europe range from 66.4 (Italy) to 86.6 (France) versus 56.6 for Japan.

In Japan, an equal pay for equal work law will go into effect on April 1, 2020. According to Professor Abe, foreign observers find it difficult to understand why Japan has a two-tier wage structure that pays “regular” and “nonregular” employees differently for essentially the same work, thus resulting in the substantial wage gap. As she explains, even if two truck drivers employed by the same company are doing exactly the same work, the one who is a regular employee may be subject to job transfers and sudden changes in assigned tasks; in exchange for this, goes the thinking, this driver usually earns more than his nonregular counterpart. The new law, however, aims to eliminate more unreasonable differences in remuneration.

But according to NLI Research Institute assistant chief researcher Kim Myonjun, it will not be easy to narrow the wage gap, since it is up to labor and management to create rules or for the courts to issue rulings on cases brought before them as to what constitutes “unreasonable” wage differences. Professor Abe says that although the new law is headed in the right direction as far as reflecting social trends is concerned, she is cautious in assessing just how well it will work to prevent a de facto two-tier labor market structure.

Professor Abe also maintains that dearth of public support is another reason for the high poverty rate among Japan’s single-parent families. While some single mothers may wish to become regular employees, many more have no choice but to continue working part-time because they need flexibility to take care of their children. Even with the new law, she says, part-time wages in some occupations may not rise, and for single parents who aren’t earning enough, it’s imperative to expand access to public assistance by making it easier for them to apply for welfare and so forth.

Professor Abe has studied various facets of the effects of families’ economic circumstances on children. She asserts that there are no aspects of children’s wellbeing—from school-related issues such as academic performance, bullying, or refusal to attend school to less robust self-confidence, physical stamina, and even tooth decay—that do not correlate to family finances.

Compared to previous times, Japan has become a society where money talks. This affects children too, since their future academic attainment may depend on whether their parents can afford to pay for afterschool academic coaching to secure them a place in a top-ranked school and on the path to a promising future. Professor Abe concludes that this magnifies the effects of child poverty, turning Japan into a class-based society.

(Originally published in Japanese. Banner photo: At far left, in the visitors’ gallery of the House of Councillors, Katō Masashi—an official at the Ashinaga Foundation, which provides educational funding and support activities for children orphaned or from single-parent families—rejoices at the passage of the Act to Promote Anti-Child Poverty Measures. © Jiji.)

Absolute poverty, as seen in some nations of the developing world, refers to the lack of food, healthcare, and other essentials of life due to low or nonexistent income. Relative poverty, meanwhile, occurs when household income is much lower than the median standard of living in a particular society. The relative poverty rate refers to the percentage of people whose income falls below the poverty line, as calculated by a mathematical formula. For example, Japan’s relative poverty rate of 50.8% for single-parent families on 2015 meant that one out of every two single-parent households (adjusted for the number of people in the household) earned annual income below the poverty threshold of \1.22 million.