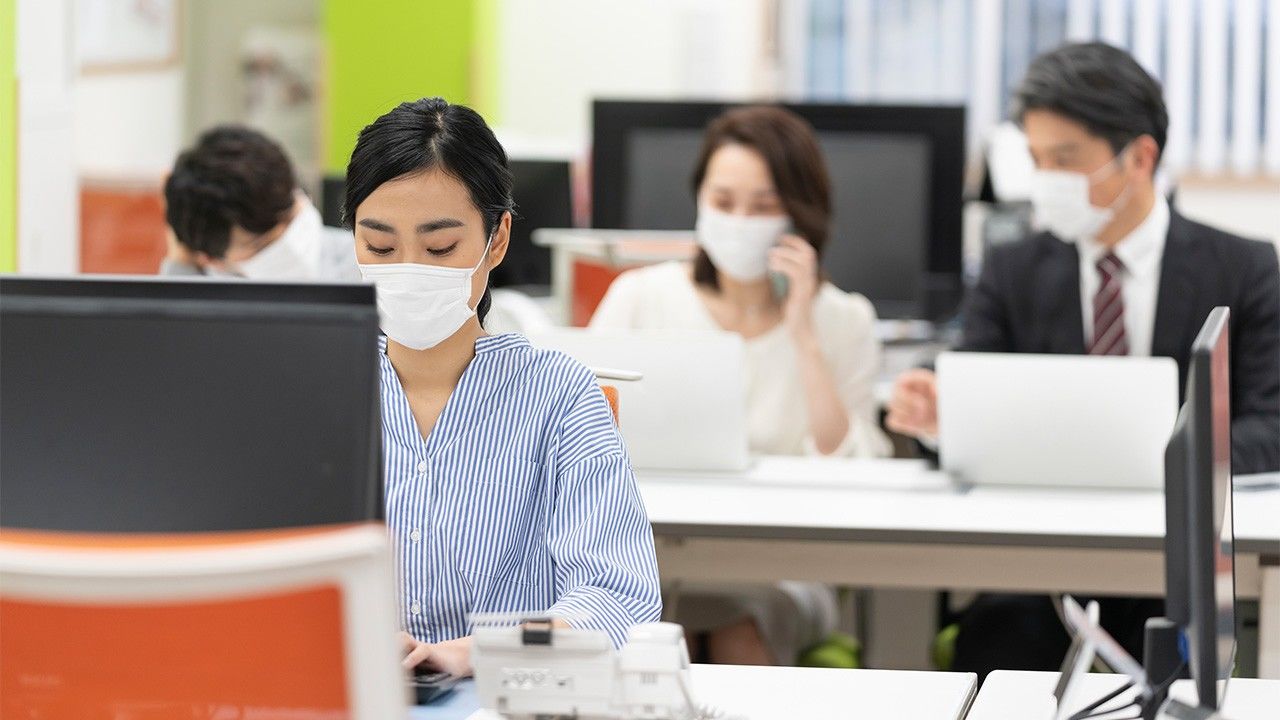 “Workcations”: Changing How Japanese Offices Run in the Post-COVID-19 Era

Economy Society Work Jul 2, 2020
As Japanese companies adopt remote work amid the COVID-19 pandemic, employees are enjoying greater freedom in choosing where they want to clock in from.

The COVID-19 pandemic is dramatically reshaping how Japanese work. Amid government calls to reduce contact among people, companies have had to quickly adopt telecommuting and other measures to prevent the spread of the disease. As remote work becomes a standard practice at firms, more employees are taking advantage of their newfound freedom from office strictures to choose work environments that allow them to balance professional output and personal lifestyles.

One prominent buzzword that has emerged amid the burgeoning work-from-home movement is “workcations,” the idea of taking trips, such as to tourist destinations, that combine elements of work and leisure. The concept was first embraced by IT firms in the United states in the early 2000s and has gradually gained traction in Japan as a way for employees to maintain a healthy work-life balance. Demand for remote-work services are on the rise as the coronavirus forces companies to move their workforces online, and a growing number of regional governments around Japan are looking to workcation as a means of enticing the growing ranks of telecommuters to visit for a working holiday.

In May 2020, for instance, the Mie prefectural government announced it had installed high-speed Internet and bolstered other infrastructure at tourist areas like Ise Shima National Park to make the locations more attractive as workcation destinations. As part of the plan, authorities converted structures like abandoned school buildings and traditional kominka homes into work stations and offices with the aim of luring workers based in major urban areas.

The project envisions teams of employees coming for days, or even weeks, to enjoy the relaxing office environment and natural surroundings. During a typical stay, workers would carry out their daily tasks in a spacious office, with face-to-face discussions with colleagues and even online conferences with the head office being conducted in the open air instead of cramped meeting rooms. Come the weekend, employees would head off with family or friends to see the sights or enjoy outdoor activities like mountain climbing and camping. Workers would not be tied to one spot, either, but could move among different facilities located around the prefecture to take full advantage of their stay.

These Mie workcation plans will initially be available to companies in nearby urban areas starting this fall, and the prefecture will extend availability to firms around Osaka and Aichi from next year with the goal of reaching 100 reservations annually.

Wakayama is also looking to woo telecommuters. One of the first prefectures to promote itself as a workcation destination, it has continued to expand its remote-work infrastructure in areas like Shirahama, a picturesque resort town on the southern coast of the Kii Peninsula. In February, ground was broken on a new facility that is a first-of-its-kind collaboration between local authorities and a private company, OS Co., an Osaka-based real estate developer and member of the Hankyū Hanshin Tōhō Group. Leveraging the area’s scenic beachfront, the building when finished will house offices that look out on the Shirahama coastline and will boast a rooftop terrace with unobstructed views of the sea.

Shirahama was already gaining attention as a workcation hub even before the coronavirus. In 2019, three firms, including telecommunication giant NTT Communications, contracted to use a remote-work facility run by property developer Mitsubishi Estate as a satellite office. With the pandemic expected to continue into the foreseeable future, the demand for teleworking office space in Shirahama is set to grow even further.

The workcation market received a huge boost after companies around Japan started switching to telecommuting following a spike in COVID-19 cases in March. NTT Data surveyed some 1,200 white-collar workers in April, after the government initially declaring a state of emergency in seven prefectures (this was later extended to the entire country), and found that 39.1% of firms had implemented telecommuting for employees, compared to just 18.4% in January. If remote working becomes an established labor practice even after the coronavirus subsides, the demand for workspaces will give regional governments and private businesses hoping to catch the workcation wave huge business opportunities. This in turn will provide workers more locales to choose from, making it easier to pick destinations that best suit their professional demands and personal interests.

Workcation is also chipping away at the rigid structure of Japanese offices, potentially reshaping the very way companies run.

Most firms emphasize collaboration and teamwork, with consensus building and attention to details among the top priorities. In the pursuit of efficiency in their business, companies typically adopt an open office format, allowing for ease of interaction among employees and managers. Workers are expected to follow a set work schedule and diligently toil away at their desks throughout the day, frequently coordinating with colleagues and providing regular updates to superiors who have to sign off on each step of a project. In such an environment, employee comfort takes a backseat to “getting things done.”

The importance of face-to-face interactions is also behind the overconcentration of corporations in Tokyo. Companies see it in their advantage to be located close to corporate clients and government offices so that sales meetings and the exchange of information can be conducted in person, quickly and effectively. However, the arrival of the coronavirus has turned this system on its head.

The government has called on the nation to avoid the “three Cs”—closed spaces, crowds, and close contact—all of which employees encounter on packed commuter trains and while spending long hours in cramped offices. However, after switching to remote work, not a few companies are finding that employees can still achieve the same level of communication even while working from home, assuring that it will remain an attractive option for many firms even in the post-coronavirus world.

In Japan, there is a deeply entrenched belief that employees will shirk their duties if not under the watchful eyes of colleagues and superiors, and that without the structure of office life, production will suffer. Deep-rooted concerns like these have stifled the growth of remote work. But as more people work from home, companies are beginning to realize that they can easily overcome the shortcomings of working online by implementing new protocols and systems.

Hitachi offers an illustration of the potential remote work has to change how corporations operate. In late May, the manufacturing giant announced that 70% of its domestic workforce, some 23,000 employees, would continue telecommuting on a permanent basis even after the end of the COVID-19 pandemic, with workers to commute to the office no more than two or three days a week. In making this decision, Hitachi has concluded it can maintain productivity by creating a system that assesses the performance of each employee based on clearly defined goals instead of the number of hours they spend on the job.

The company also feels confident it can overcome the decrease in face-to-face interactions with new approaches that take advantage of improvements in online technology. In many cases, though, employees find their own ways to overcome barriers to communication.

For instance, GMO Internet Group also announced it was switching to remote work on a permanent basis from late June 2020, with employees working from home one to three days a week. Although executives voiced concerns that the decrease in informal interactions among employees would adversely affect group cohesion, such worries turned out to be unfounded. Instead of remaining cloistered at home alone, workers remained in touch with their colleagues by holding online lunches and other virtual gatherings, prompting GMO to commit to supporting similar employee-initiated initiatives going forward. 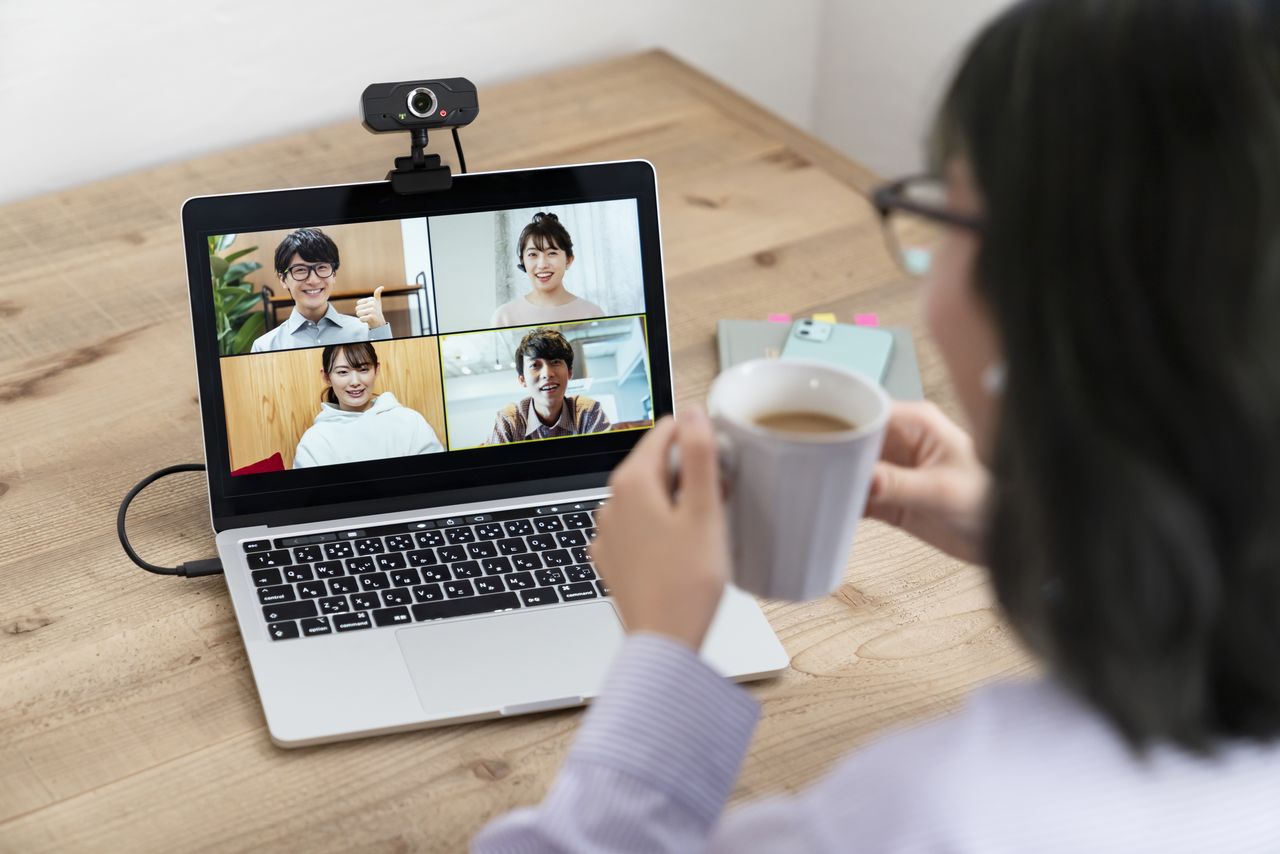 Online lunches and similar employee-generated gatherings have helped colleagues remain in touch while they work from home. (© Pixta)

As with any disruption, the coronavirus is stimulating innovation by forcing employees and companies to reassess long-held ideas about work. Corporations are beginning to learn that not only are long hours in the office unessential to the efficient running of business, productivity in fact improves when the comfort of workers is emphasized.

Research from the United States and other countries shows that workers perform better and are more creative when they find their work environment satisfying. In Japan, Hitachi has found similar results when it conducted a telephone survey of staff at a company call center. By comparing the level of satisfaction of staff to the number of orders they took, researchers discovered that employees were most productive—that is, took more orders—when they felt comfortable in their work surroundings.

This finding may provide a key to solving Japan’s productivity conundrum. Since 1994, the nation has had the lowest per-hour labor productivity of white-collar workers among the G7 countries. However, firms that are giving concepts like workcations a try are realizing that employees, even when they are in a tourist resort in some far-flung part of Japan, put more into their jobs if they are presented with a fulfilling work environment rather than being chained to a desk.

Workcations are not the only way to achieve such results, and in the post-COVID world we might see offices equipped with sports and recreation facilities, movie theaters, or cultural amenities. But for now, the prevailing trend is toward remote work.

The COVID-19 has forced Japan to start breaking away from its dependence on in-office labor and embrace telework. I hope that by adopting worker-focused initiatives aimed at boosting employee satisfaction, companies can reinvent themselves and achieve a much-needed boost in productivity.

(Originally published in Japanese. Banner photo: Masks and social distancing have become the norm in Japanese offices during the coronavirus pandemic. © Pixta.)