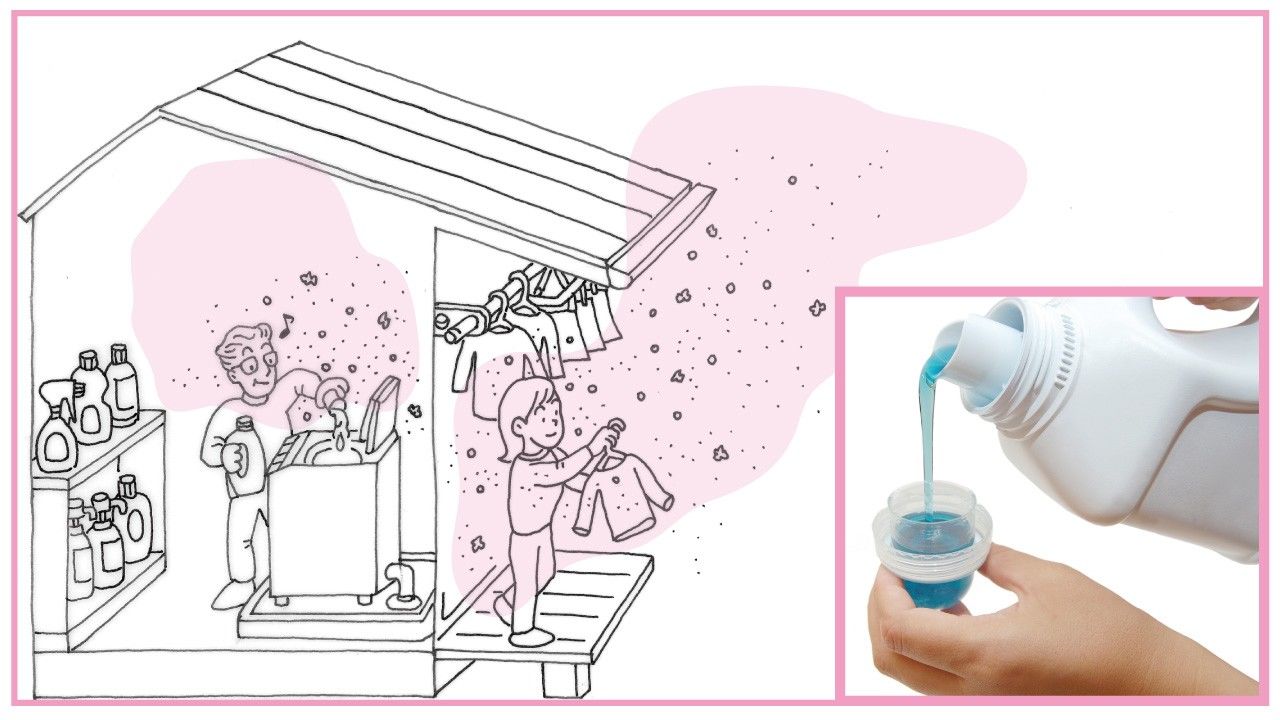 The Sweet Danger of Scent Pollution

Society Health Jul 30, 2021
As cosmetics and fabric softeners infused with artificial fragrances proliferate, there are increasing complaints of headaches and nausea caused by the chemical substances used to create the scents. What are the risks of this new kind of air pollution?

Over the past decade or so, there have been increasing complaints about sickening odors: the laundry hung out on the balcony by a condominium neighbor, the smells permeating a packed commuter train, and the scents emitted by coworkers in the office. In many cases, these offensive odors are surmised to come from fabric softeners used in the home when washing clothes. Other sources of what has come to be known as “scent pollution” include fragrant synthetic detergents, air fresheners, sanitizer sprays, deodorants and antiperspirants, and perfumes.

Since the start of the 2000s, more and more people are suffering from multiple chemical sensitivity, chronic fatigue syndrome, and autoimmune diseases, conditions that were rare just a half-century ago. While these conditions are believed to have some connection to chemical substances, there are now so many artificially created chemical compounds that it is difficult to pinpoint which ones are causing the problems. Because of this, some people who find their health deteriorating are dismissed as being overly nervous. Scent pollution is similarly thought to originate in household products whose chemical substances pollute the air and can be harmful when breathed in. At present, however, there is insufficient scientific proof of the health hazards caused by scent pollution or the mechanisms involved, and little public awareness of the dangers.

The number of people affected by scent pollution is not clearly known. In 2020, the National Consumer Affairs Center reported that it had received 928 consultations since 2014 (78% were from women aged 30–60) complaining of health problems caused by the smell of fabric softeners. It should be noted that the number of people who have filed complaints probably represents only a fraction of the actual number of victims.

Seven consumer groups, including the Consumers Union of Japan, joined forces to carry out a public online survey on the detrimental effects of scented products. The survey was carried out from December 2019 through March 2020 and garnered responses from 9,332 people. Given that the joint group carrying out the survey deliberately targeted people who demonstrated a keen interest in scent pollution as well as people who said their health had been affected by scent pollution, there is some bias in the results. Nevertheless, it is noteworthy that 7,000 respondents claimed that they had been sickened by certain scents.

This number included 85% of female respondents and 56% of male respondents. By age, 87% were in their thirties, 83% in their forties, 78% in their fifties, and 66% in their sixties or older. As many as 20% said they suffered so much they were forced to quit their jobs and some stopped going to school. The high rate of women among those who suffered may be related to the fact that in many cases, conventional gender roles mean that more women are responsible for domestic work such as cooking and laundry. 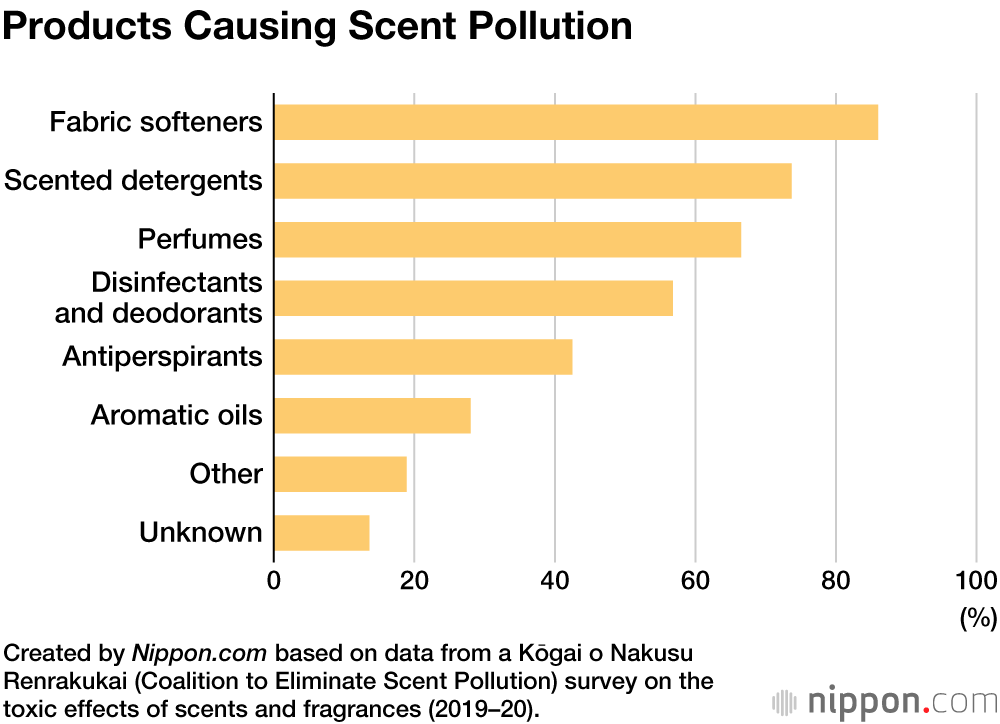 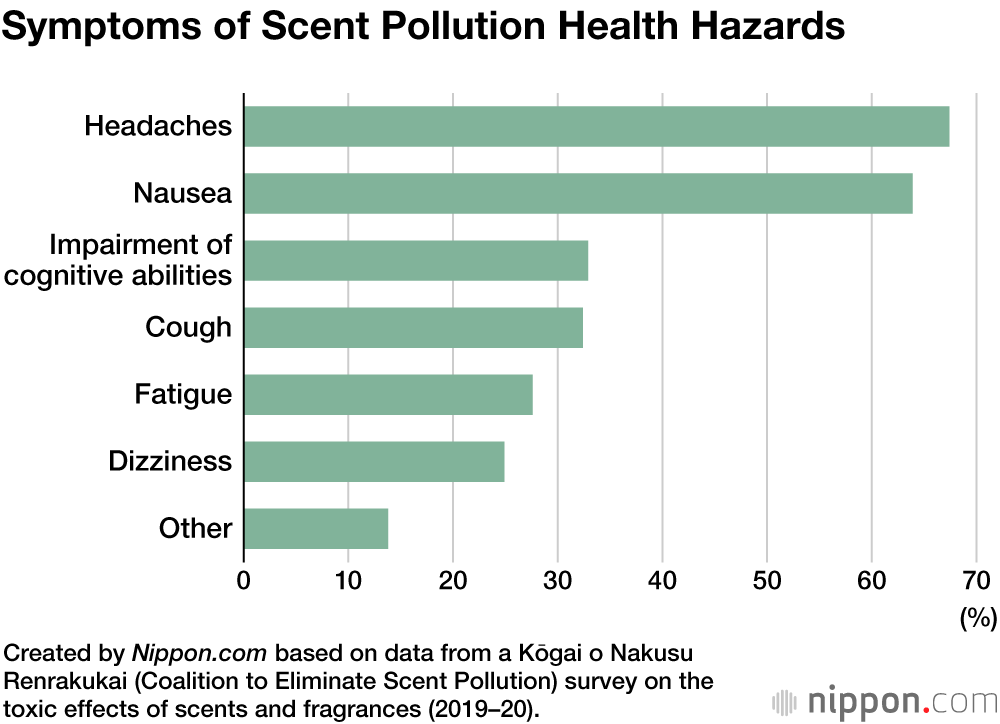 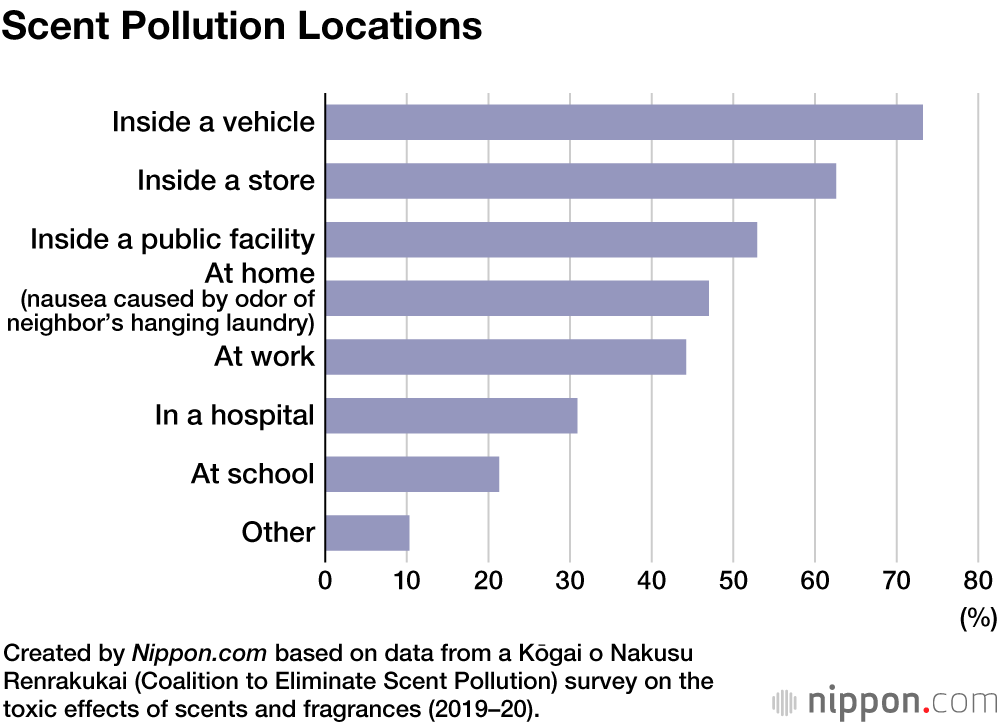 One problem in dealing with scent pollution is that the health hazards are often dismissed as a matter of “personal taste” or “genes.” In 2020, the Asahi Shimbun ran an article about scent pollution. While the article noted that some doctors were seeing a troubling upward trend in patients suffering from the malady, it also quoted a comment by an expert that “disliking fabric softener depends on your genetic constitution.” It bothers me to see this kind of opinion take hold without qualification.

Given that many people are complaining of health problems, rather than mere discomfort, scent pollution can no longer be dismissed as a matter of individual sensitivity or genes. Dr. Sakabe Kō, a professor of medicine at Tōkai University and a leading authority on chemical sensitivity, or CS, asserts that a characteristic symptom of scent pollution is chemical-induced olfactory hypersensitivity. It is highly likely that many of the victims of scent pollution are suffering from CS.

Artificially scented household products began to proliferate in Japan around the year 2000 as manufacturers competed to expand their market share. Scented products were not new, of course, but the arrival of Downy, a fabric softener from the United States, prompted Japanese manufacturers to focus on the development of products with floral and richer, sweeter scents. Daily barrages of TV commercials for scented products have helped to push sales volume for such products to 1.5 times that of 10 years ago. Japanese consumers are buying the new scented products even if they are a bit pricy to erase body odor and other unpleasant smells. The Japanese obsession with cleanliness is contributing to a booming market.

The outcome of all of this has been a new kind of scent pollution caused by the mixture of toxic substances used to create the popular scents. And the situation is being aggravated by the microcapsules used in fabric softeners and other types of scented cleaners. The “bursts of fragrance,” “long-lasting scents,” and “nano-air-freshening” capabilities touted by manufacturers are made possible by a technology that locks fragrances and deodorants in tiny capsules made of urethane and melamine resins.

For example, “long-lasting scents” are the result of innumerable microcapsules adhering to clothing, bursting with every movement and rubbing of the fabric. This has led to the contamination of the environment with the microplastic fragments and single-molecule synthetic resin monomers from the damaged microcapsules, as well as the scent and deodorant substances they release. It is likely that people are unknowingly inhaling these artificial, and toxic, chemical substances. While some manufacturers are starting to replace their microcapsules with less hazardous substances, research and development continue on how to get even more microcapsules to adhere to fabrics and how to achieve even longer-lasting fragrances. Many consumers do not realize that the rose and lavender fragrances that they find so refreshing are artificially made from synthesized chemicals.

At present, several citizen groups are pressing the government to measure the volatile organic compounds emitted from fabric softeners and air fresheners and conduct inhalation toxicity tests. In addition, they are asking for the banning of microcapsule use in fabric softeners and urging schools and public facilities to refrain from using fragrances. A few municipalities have even started making public awareness posters on “fragrance etiquette,” but these merely urge the general public to be aware of the issue, by no means venturing so far as to alert or regulate the manufacturers producing the problem products. 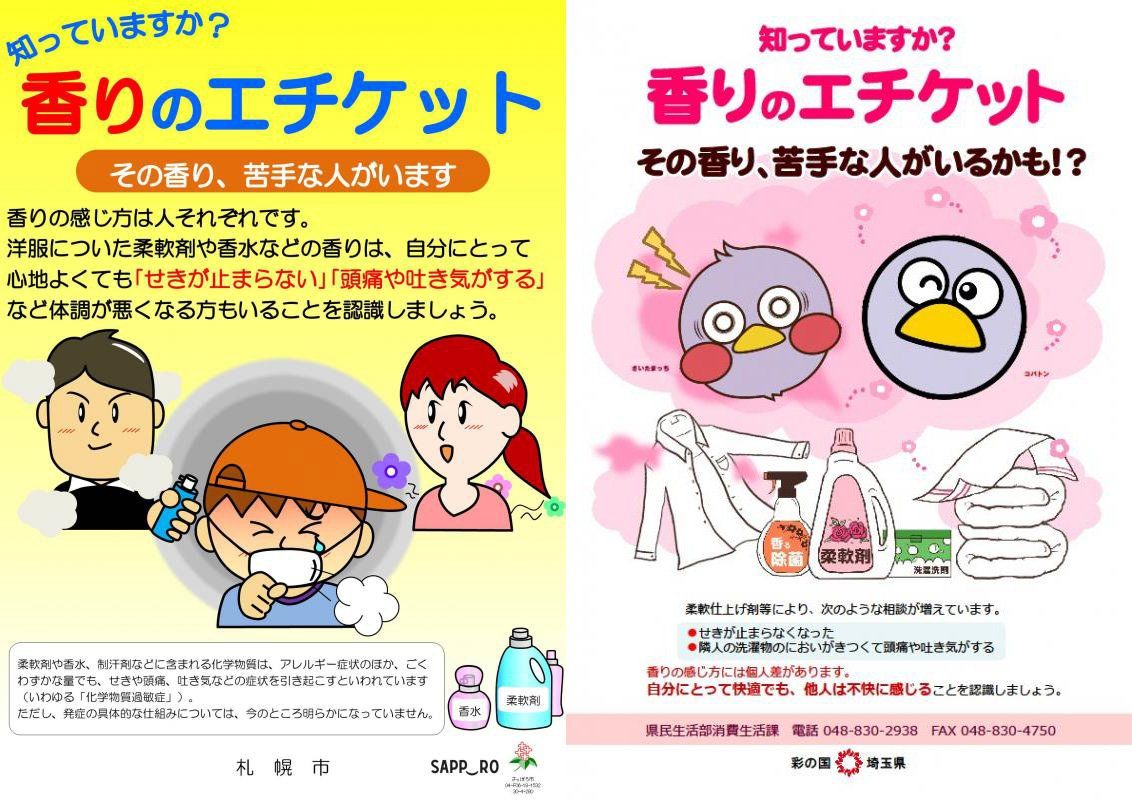 Public awareness posters on “fragrance etiquette” produced by the Sapporo municipal office (left) and Saitama Prefecture (right). As of June 2020, 51 local governments have created posters like these, and the number is growing.

A Need for Prompt and Decisive Action

Diverse products are contributing to scent pollution, but fabric softeners are the most toxic because they contain so many artificial substances, including the scent and deodorant substances contained in microcapsules and the surfactant detergents used to soften fabrics in the wash.

Most recently, picture books for children have appeared containing capsules that emit a fragrance when touched. But the burst micro- and nanosized capsules can be inhaled; once they enter the lungs, they slip through the spaces between our body’s cells to flow into the bloodstream. There is a critical need for medical research to elucidate this phenomenon and assess its dangers.

In the process of Japan’s remarkable economic development after World War II, the country has experienced several pollution disasters, among the most famous the organic mercury pollution leading to Minamata disease and the food pollution caused by PCB, or polychlorinated biphenyl, and dioxin that triggered what came to be known as Kanemi oil poisoning. It took a long time for the connection to be acknowledged between these cases of pollution and the hazard to human health, and to this day many victims have yet to be given satisfactory relief.

We must not repeat the mistakes of the twentieth century by dismissing the dangers of scent pollution simply because the causes have yet to be verified. Prompt action is required before the pollution spreads. The sense of smell is critical in detecting danger. While their numbers may still be small, the people who are complaining of the detrimental effects that scent pollution is having on their health are giving us warning of a real threat to our very existence.

(Originally published in Japanese. Banner illustration: How toxic emissions from fabric softeners permeate the air when washing and hanging out laundry. Drawing by Yasutomi Saori.)