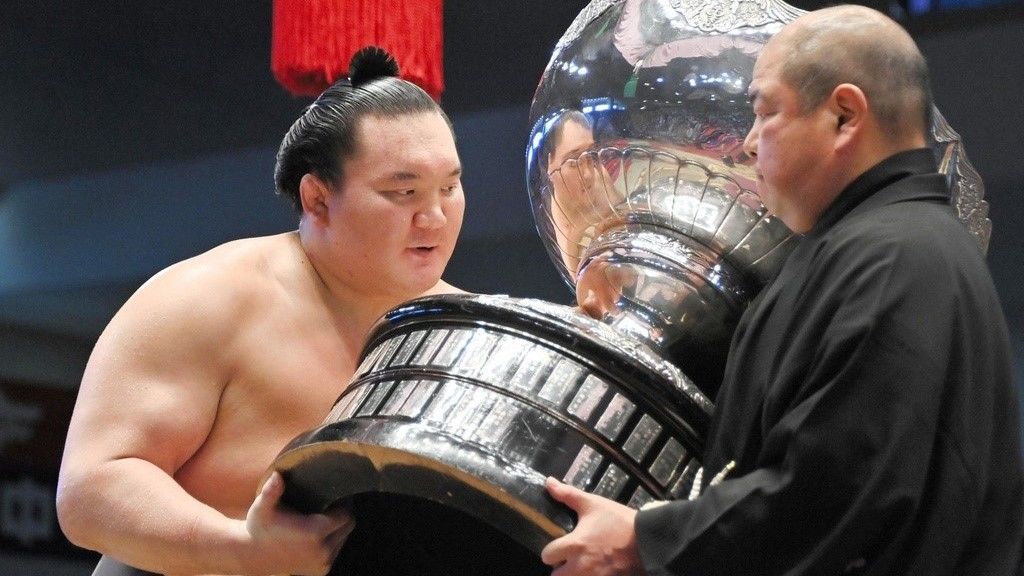 Culture Society Sports Jan 12, 2022
Following his retirement as a wrestler in September, former grand champion Hakuhō stepped into his new role as a sumō elder and manager of a heya, or training stable, taking the name Magaki. Becoming a stablemaster requires Japanese citizenship, which Hakuhō received two years earlier. But why in a sport with a growing foreign presence is nationality a prerequisite for managing a stable? The long-running debate offers a lens into the Japanese sports world and broader society.

In April 2021, a panel of experts released a long-awaited group of proposals on the future of professional sumō. The Japan Sumō Association, the sport’s governing body, formed the panel, led by Professor Emeritus Yamauchi Masayuki of the University of Tokyo, in May 2019 to advise the organization in how best to maintain traditional aspects while boosting interest in the sport beyond Japan’s borders. The report touched on the fact that wrestlers must take Japanese citizenship to continue as stablemasters after retirement, requiring them to relinquish their original nationality.

The panel stated in its report that “stablemasters are responsible for instructing wrestlers in the ways of sumō, the national sport of Japan,” and calls on them to have “an intimate understanding of the distinct aspects of Japanese culture and customs.” It argues, somewhat ambiguously, that stablemasters and other elders must also show that they are “deeply rooted in Japan,” a state it contends is best expressed “symbolically and substantively as Japanese nationality.”

However, it is hard to reconcile the panel’s stance with the growing number of foreign-born wrestlers in sumō’s ranks, a trend the group endorses. While holding up Japanese nationality as a safeguard of the sport’s culture and traditions, the group goes on to laud the diversity of rikishi, boasting how over the decades sumō has had 192 wrestlers from 24 countries. The report specifically mentioned how there have been 65 rikishi from Mongolia, 37 from the United States, and 17 from Brazil, and stated unequivocally that foreign wrestlers and stablemasters will remain an integral aspect of the sumō landscape.

Upon closer look, however, the tone of the report’s argument is best understood as a thinly veiled comment on recently retired Mongolian-born grand champion Hakuhō. Over his career, Hakuhō drew critics for his rough tactics in the ring and other behavior deemed unfitting of a yokozuna, conduct that was often blamed on his foreignness. The fact that Hakuhō already took Japanese citizenship in September 2019 places a question mark over the panel’s recommendation, though.

At the same time, though, no wrestler did as much as Hakuhō to raise the image of sumō. He was the most successful rikishi in history, winning 1,093 bouts and 45 grand tournament championships, among a slew of other records. His rapid rise through the ranks and lengthy tenure as sumō’s lone yokozuna renewed the sport’s image tarnished by a string of devastating scandals, including illegal betting by wrestlers and match fixing. In the wake of the 2011 Great East Japan Earthquake, Hakuhō headed tours to communities hit hard by the disaster, where he performed the ring-entering ceremony in a show of solidarity, illustrating his deep understanding of the significance of sumō in Japanese culture. These considerations, along with the simple fact that he has been immersed in sumō since arriving in Japan in 2000, should provide ample proof of his being “rooted” in the culture.

A similar argument can be made for other foreign wrestlers. In the last few years, leading Mongolian rikishi like former yokozuna Kakuryū, who is now a stablemaster, current yokozuna Terunofuji, and komusubi Ichinojō have taken Japanese nationality with an eye to eventually stepping into roles as elders. All have been in Japan for more than a decade and are firmly ensconced in sumō, which should serve as a better gauge that they have assimilated to the customs and traditions of the sport and host country than swapping one nationality for another.

The JSA showed just how concerned it was about Hakuhō, though, by taking the unusual step of having him sign a pledge upon becoming an elder in which he promised to firmly uphold “in words and actions” the traditional culture and spirit of sumō, the regulations and norms of the association, and the customs and mores of the sport. The reasoning behind the move is unclear, but likely stems from Hakuhō’s use of unsavory tactics such as elbow strikes, slaps to the face, and upward forearm thrusts while a wrestler. It is anyone’s guess why the JSA weighted these concerns above Hakuhō’s exemplary legacy.

The panel’s recommendations and the JSA’s actions raise a bevy of questions, foremost being that of whether Japanese citizenship truly translates into upstanding behavior by sumō elders. After all, scandals like assaults on lower-ranked wrestlers, illegal betting on baseball games, and rikishi visiting red-light districts in violation of COVID-19 protocols all took place under the watch of Japanese-born stablemasters.

In its set of proposals, the panel coined the term nyū-Nihonka to describe foreign wrestlers coming to fully embrace the history and traditions of sumō. The use of prefix meaning “entry” and the word Nihonka (Japanization), a phrase with a fraught history, suggests an emphasis on “assimilation,” an idea that the group soundly refutes. In defining the term, it holds up two other Japanese martial arts, jūdō and kendō, as opposing models of internationalization. Jūdō, on the one hand, is described as moving away from its traditional roots as it evolved into competitive sport, whereas kendō is depicted as having kept its culture intact.

In essence, the panel argues that sumō has two ways forward. Like jūdō it can explore new approaches that incorporate nonnative elements, or following kendō’s example, it can preserve its long-held traditions and culture. The group strongly recommends the latter approach, with the emphasis being on fostering an appreciation and understanding of the history and norms of sumō.

For the sake of perspective, it is worth looking at the issue of nationality in other sports. The International Olympic Committee, for instance, enforces the so-called three-year rule. According to Rule 41 of the Olympic Charter, a competitor who has changed nationality may represent his or her new country at the Games provided that three years have passed since last competing under another flag.

The rule prevents athletes from changing nationality on a whim, such as to bolster their medal chances, and keeps leading nations from wooing top talent as a means of improving their medal counts. However, there are exceptions to the three-year rule for refugee athletes who have been forced from their home countries due to extenuating circumstances like political unrest, and the period may be reduced as long as the Olympic committees of both the athlete’s new and former nations agree on the matter.

International soccer likewise carefully governs player eligibility for national teams. However, the rules are more ambiguous than the IOC’s and consider factors like a player’s age and years of residency in a country, along with the birthplace of parents and grandparents. Governing body FIFA recently updated its regulations on switching national team allegiance, but critics still say the amount of leeway hinders team building and point to the flow of players across leagues in Europe, South America, and Asia as a need to better clarify eligibility rules.

In Japan, overseas talent is an integral aspect of professional sports. Clubs competing in Nippon Professional Baseball, soccer’s J. League, and basketball’s B. League sign foreign players to their rosters in the hope of bringing added strength to teams. However, there are rules limiting how many foreigners may participate at a given time, ensuring that Japanese players remain the core component in contests and keeping the level of competition among teams within acceptable parameters.

Whatever the strictness of the regulations may be, though, these examples make it clear that it is becoming harder to confine athletes to the simple frameworks of nationality and nation.

International eligibility rules in rugby are perhaps the most peculiar of any major sport. Along with straightforward regulations based on a player’s birthplace and residency status in a country, there are also complex rules based on which senior representative team of a rugby union the individual played for on the international stage.

Recent reforms to eligibility criteria have simplified the situation to a degree. As things stand now, players are able to take the test pitch for a union if they, or a parent or grandparent, were born in the country they wish to represent, or the individual has resided there for 36 consecutive months. In simple terms, a player does not even need to take citizenship, but only to have played in a country for over three years to be eligible to represent that nation in test matches.

The residency rule will increase to 60 consecutive months, or five years, across the board from the start of 2022, but the sentiment behind the regulation remains the same. In rugby, the time spent playing in a country and subsequent connections that are made are valued alongside nationality.

In individual sports like tennis and golf as well, ties to country are increasingly less important. Nationality has minimal significance on international tours where athletes must win against opponents from an array of countries—including their own—to move up the rankings. What is more, players are often based overseas and compete on circuits in multiple countries.

Tennis superstar Ōsaka Naomi, for instance, represents Japan, her country of birth, but lives and trains in the United States. Professional golfer Sasō Yūka is a dual citizen of Japan and the Philippines. Although she represents the latter, she is a regular on the Japanese women’s tour and has made a name for herself playing in the United States. Like Ōsaka, though, she will have to renounce one of her passports when she turns 22 as per Japanese law, which does not allow dual citizenship past that age. This, however, is unlikely to impact her identity as an athlete.

Returning to sumō, while the desire to preserve the distinct culture and traditions of the sport is understandable, the Japanese citizenship requirement for admittance to the JSA as a stablemaster can only be seen as an unjust burden on foreign-born wrestlers hoping to build second careers as trainers. What is more, the inflexibility of the policy has the potential to backfire on the JSA by dissuading foreign recruits from joining sumō, a catastrophic development for the long-term wellbeing of the sport.

As the country’s national sport, sumō should reflect the changes now being seen in Japanese society. The number of foreigners moving to the country to work or study continues to tick upward, and international marriages and the number of foreign children growing up in the country are also on the rise. Japan is diversifying and being pressed to decide whether it should insist on adherence to native tradition—to take the nyū-Nihonka line that the JSA has adopted—or adapt to be more inclusive.

One of the core messages of this year’s Tokyo Olympic and Paralympic Games was the importance of understanding and respecting differences. This, of course, includes helping foreign rikishi come to value the history and traditional culture of sumō. But the distinct cultures, values, and even religious beliefs and practices of foreign wrestlers are deserving of equal consideration.

Japanese-born physicist Syukuro Manabe (Manabe Shukurō) recently made headlines for winning the Nobel Prize in Physics. He took US citizenship decades ago, giving up his Japanese nationality in the process, to continue his research at American institutes. If Japan allowed dual nationality, this would have been unnecessary. Leaders and the public need to discuss the merits and demerits of keeping the law in place as Japanese society diversifies.

Sumō could remain a bulwark of tradition. By adjusting to the growing diversity of rikishi, though, it might instead become a catalyst for changing society.