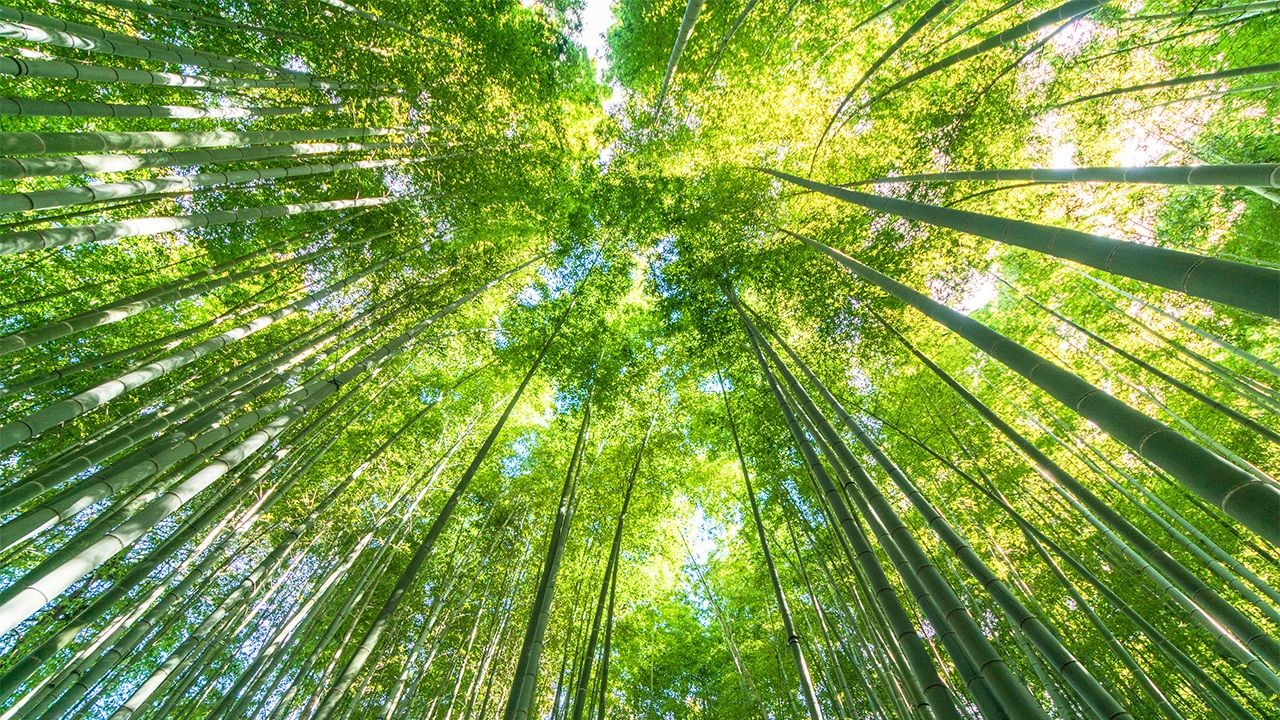 The Japanese Economy in 2022: Overcoming Obstacles to Keep Recovery on Track

Economy Politics Jan 11, 2022
COVID-19 has convulsed Japan for the last two years. While Japan’s economy faces many uncertainties, such as new COVID-19 variants, a semiconductor shortage, and high crude oil prices, the author, a leading economist, predicts that it will continue a gradual recovery.

The COVID-19 pandemic continued to convulse Japan’s economy in 2021. Real GDP grew by fits and starts, decreasing an annualized 2.9% against the previous quarter in January–March 2021, after which it increased 2.0% in April–June and decreased 3.6% in July–September. The industrial production index fell 3.7% against the prior quarter in July–September 2021, declining for the first time in five quarters due to semiconductor shortages and to shortages in the supply of parts ensuing from the spread of the pandemic in Asia.

Both real GDP and the industrial production index are expected to recover in October–December 2021, supported by the diminished growth of new COVID-19 cases in Japan, the lifting of the emergency declaration in September, and the gradual improvement of parts shortages. These trends are likely to continue in 2022.

In the Japan Center for Economic Research’s December 2021 ESP Forecast (released on December 15), which averages the predictions of some 40 private-sector economists, real GDP is forecast to grow an annualized 6.39% against the prior quarter in October–December 2021 and to grow 2.72% for the whole of fiscal 2021.

The Japan Center for Economic Research also releases a number of special ESP Forecasts. In odd months since September 2020, JCER has asked economists to select and rank three risks for Japan’s economy. The risk ranking first up to the September 2021 forecast was the COVID-19 infection situation. However, reflecting the sharp decline of new cases, the infections fell to second place in the November forecast, with the worsening of the Chinese economy replacing it in first place.

Another special forecast that JCER publishes every three months concerns the purchasing managers’ index for China. This PMI showed improvement going forward in the November forecast, with the consensus forecast indicating the index exceeding 50—the number indicating a majority of respondents taking a positive view—in the spring of 2022 and beyond.

The risk factor ranking third was rising crude oil prices, replacing the worsening of the US economy in that place. The increase of crude oil and other resource prices and the increase of transportation costs are factors of immediate concern. However, the benchmark West Texas Intermediate will average $70.77 per barrel in 2022 (according to the December forecast), and it is reasonable to assume that crude oil prices will settle down by mid-2022.

With the rapid decline of new COVID-19 cases since September, people are beginning to feel more hopeful in Japan. On November 26, however, the World Health Organization designated a new COVID-19 variant of concern, discovered in South Africa, and named it Omicron. It is reported that this variant is more transmissible than Delta and that existing vaccines may be less effective against it.

On December 7, Dr. Anthony Fauci, director of the US National Institute of Allergy and Infectious Diseases, stated that while it is still too early to draw conclusions, Omicron does seem to cause a less severe illness. This statement helped to ease anxieties about the Omicron variant. With the Japanese government tightening border restrictions, there is little worry about the spread of Omicron in Japan as of the time of writing. It cannot be denied, however, that concerns have increased about the possible return of supply restrictions depending on how the new variant spreads globally.

The term “novel coronavirus” made its first appearance in the January 2020 Economy Watchers Survey of the Cabinet Office. While the number of COVID-19 cases has been a significant adverse factor for the economy since then, it has more recently become a positive factor due to its relatively low level. 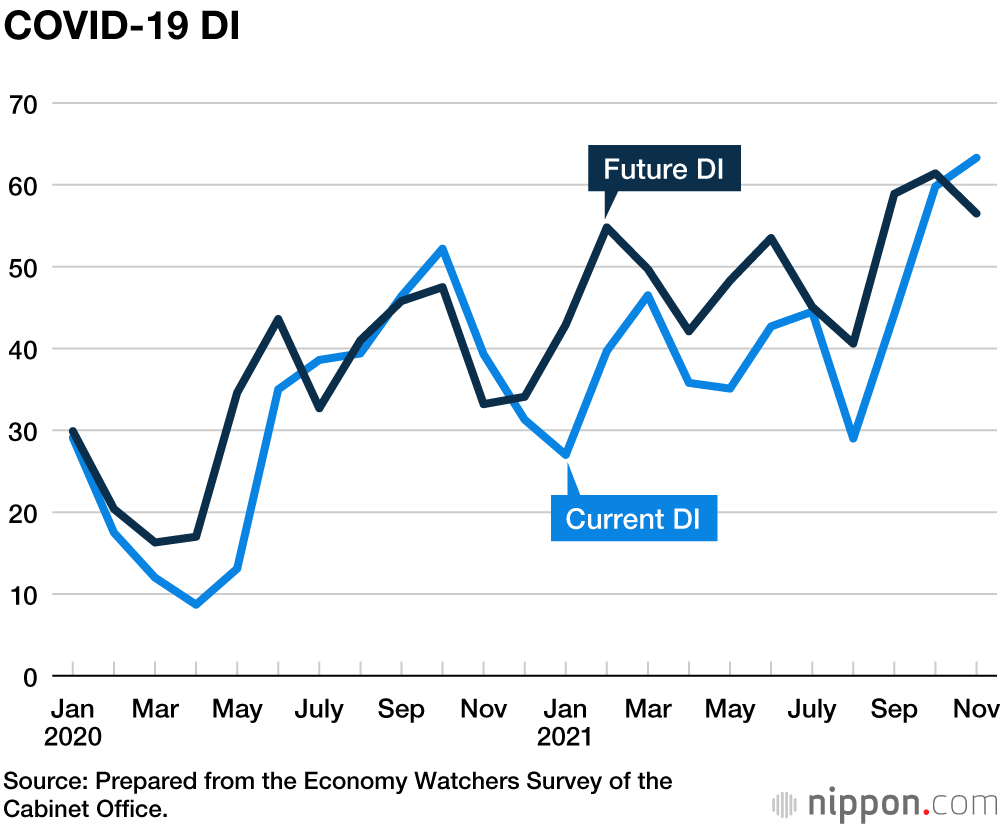 I have developed a COVID-19 current DI by selecting only respondent replies with comments on the pandemic in the November 2021 Economy Watchers Survey (in this diffusion index, responses of favorable, somewhat favorable, unchanged, somewhat unfavorable, and unfavorable are assigned values between 1 and 0 in increments of 0.25, which are then weighted by the number of responses). The resulting DI came to 63.3, the highest figure since January 2020. Moreover, the COVID-19 future DI was 61.4 in October, also a record high, after which it declined to 56.5 in November. Since the November survey covers the period from November 25 to 30, it is apparent that the future DI is reflecting concerns about the Omicron variant. Respondents commenting on the new variant totaled 168 in the future DI, less than 10% of the total, and the related DI was 46.5, falling below the 50 that divides favorable from unfavorable sentiment.

The BOJ Tankan Points to a Gradual Recovery

Meanwhile, the business conditions DI of large nonmanufacturers increased 7 points to +9, a record high since the +20 recorded in December 2019 before the COVID-19 pandemic hit. The business conditions DI for all enterprises and industries rose to +2 from –2 in the previous survey. These DIs disclose expectations that a gradual economic recovery will continue.

On November 19 the cabinet approved new economic measures totaling an unprecedented ¥55.7 trillion on a fiscal expenditure basis and ¥78.9 trillion on a project expenditure basis, which includes related financial institution loans and private-sector investments. These fiscal policies should have a positive effect and are anticipated to boost GDP 1.79% in the average forecast of the ESP Forecast and 3.15% in the average of the eight highest forecasts.

The weakening influence of COVID-19 is appearing in year-end events for 2021. In Japan’s word-of-the-year contest for 2020, half of the 30 words nominated were related to COVID-19. The top prize went to san mitsu, a phrase commonly rendered in English as the three Cs, or closed spaces, crowded places, and close-contact settings that are to be avoided. In 2021, only 20% of the 30 words nominated concerned COVID-19. The top prize went to baseball-related terms referring to Japan’s Ohtani Shōhei, a rare combination of pitcher and slugger playing for the Los Angeles Angels, who was named the American League’s Most Valuable Player.

In recognition of the gold medals awarded athletes, kin is frequently selected as the kanji of the year in years when the Olympics take place, as long as there are no shocking developments like the 2008 financial crisis. Kin being chosen in 2021 suggests that the economic expansion that began in May 2020 is continuing.

The economic expansion that began in May 2020 is expected to continue in 2022. Influenced by the production index and other trends, the government’s Index of Business Conditions that had indicated “improvement” was revised to “weakening” in September. A return to “improvement” will not occur before March 8 at the earliest, when the January index is released. There are, however, only limited prospects of the assessment of “weakening” being followed by a contraction phase. The composite index, which indicates the magnitude of economic fluctuations, turned upward after four months in October, and this index is anticipated to rise further in November and subsequent months.

The December ESP Forecast includes a composite diffusion index on business conditions expressing the consensus view of economic forecasters. This index is 88.9 for October–December 2021, far above the dividing line of 50 between an expanding and contracting economy. The composite DI then trends in the 90s in the first half of 2022 and in the 90s and 80s in the second half of the year, again far above 50. 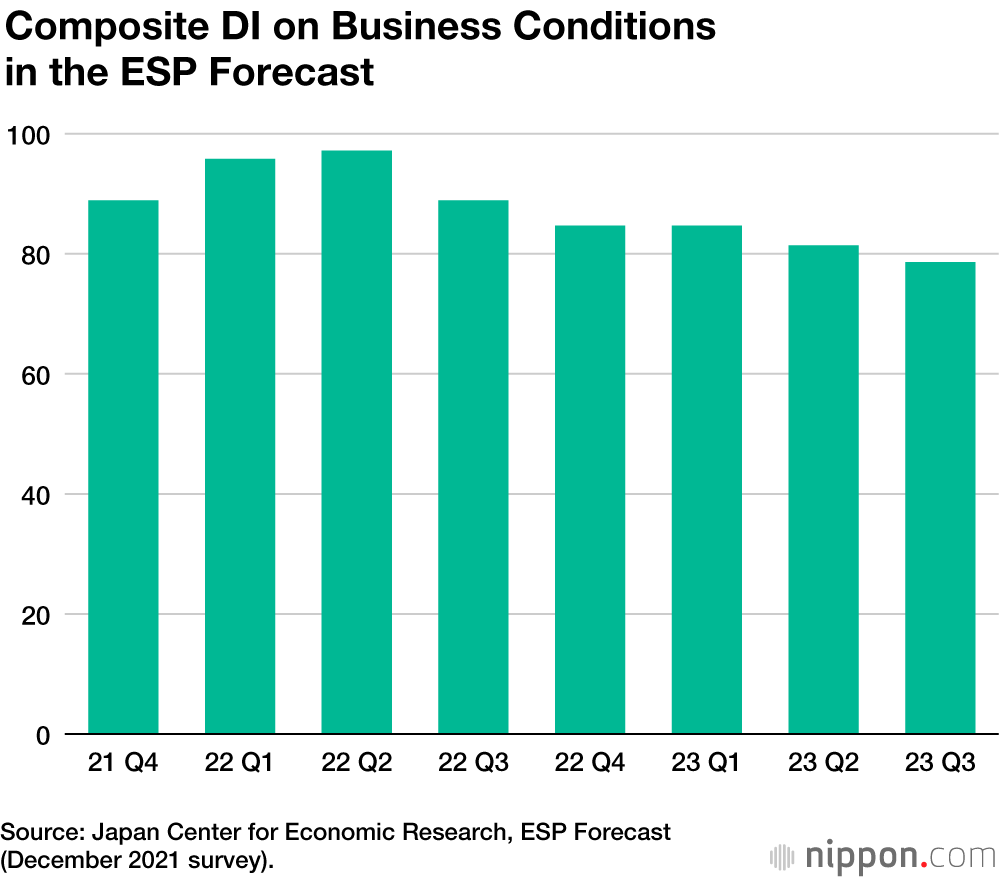