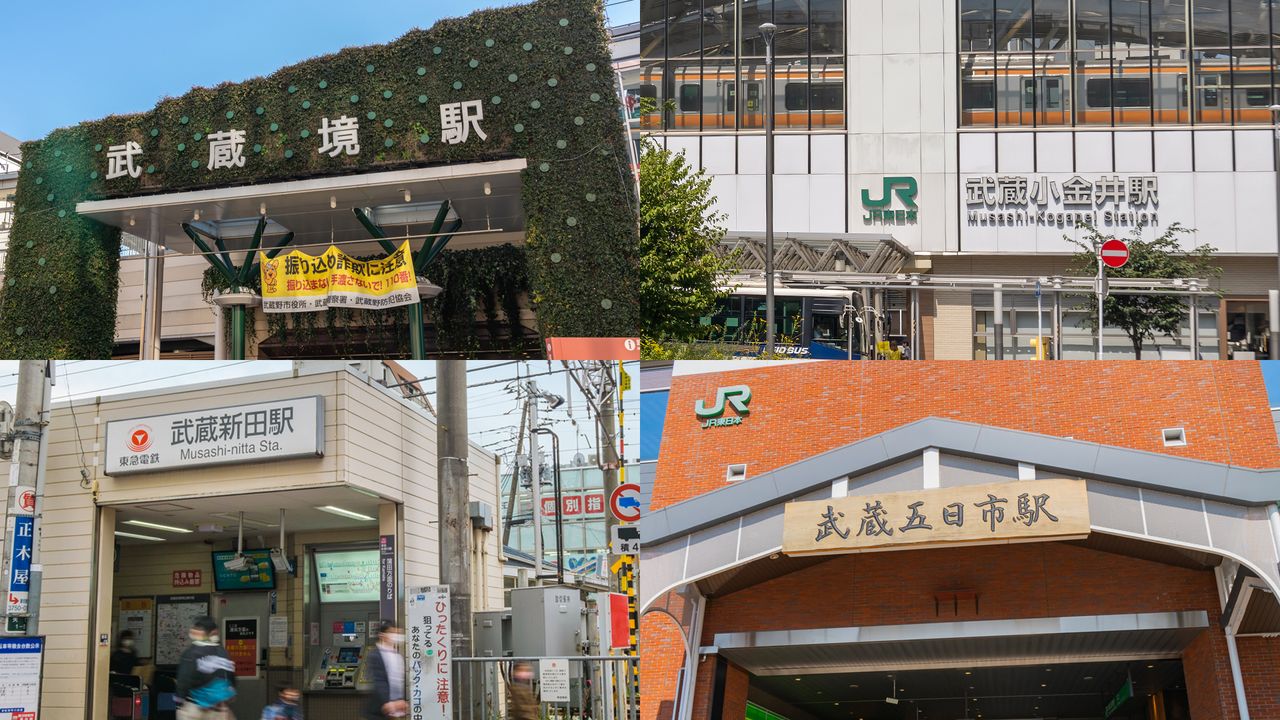 History Travel Culture Lifestyle Jun 9, 2021
Japan’s historical provinces were abolished in the nineteenth century, but their names live on in the names of train stations and other places, as well as the cultural memory. Here we look at former provinces around Tokyo.

Japan’s 47 prefectures were established in the years after the Meiji Restoration to replace the former provinces. Divisions similar to those currently in place have existed since 1888. The provinces had been around for many centuries, however, and even today their names appear in the names of places, train stations, and mountains, making it fun and useful to know them. Here we introduce the old names for the Kantō region, where Tokyo and six other prefectures can now be found.

On the JR Nanbu Line, which runs from Kawasaki Station to Tachikawa Station, there are four stations that use the kanji 武蔵 (Musashi): Musashi-Kosugi, Musashi-Nakahara, Musashi-Shinjō, and Musashi-Mizonokuchi. In fact, there are 21 stations that use the name Musashi across the prefectures of Kanagawa, Tokyo, and Saitama. They are spread over a wide area with Musashi-Itsukaichi in Akiruno, western Tokyo, the furthest west and Musashi-Ranzan in Ranzan, Saitama Prefecture, the furthest north.

Musashi was the name of the province that covered almost all of Tokyo and Saitama and also Kawasaki and Yokohama (excluding some western wards). The name was used up until the current administrative divisions were formed. Incidentally, it is no coincidence that the height of Tokyo Skytree is 634 meters. Based on goroawase number wordplay, “six” can be pronounced as mu, “three” as sa, and “four” as shi, spelling out Musashi. On fine days with good visibility, the structure provides a perfect view over the former Musashi Province.

Sagami Province was located in Kanagawa Prefecture, excluding Yokohama and Kawasaki. From today’s perspective, it may seem that Musashi appropriated all the big cities. However, Yokohama was a small fishing village until it rose to prominence as a base for foreign trade with the opening of its port in 1859. In medieval Japan, Sagami was the location for the shogunate in Kamakura, and during the Warring States period (1467–1568), the province’s Odawara flourished as the castle town of the powerful Later Hōjō clan. 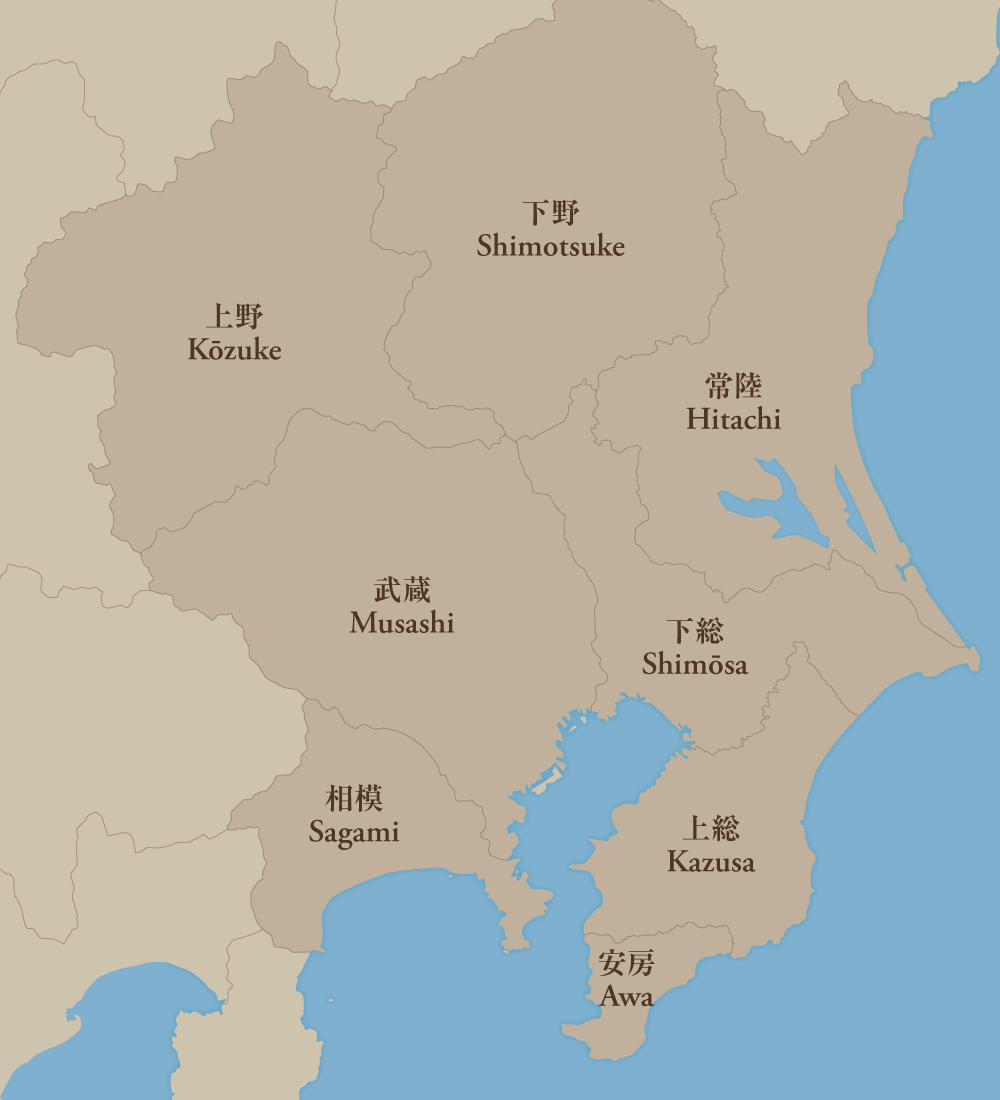 Chiba Prefecture is also known as 房総半島 (the Bōsō Peninsula), which is based on kanji from the old province names 安房 (Awa), 上総 (Kazusa), and 下総 (Shimōsa). The kanji 総 (fusa) is an old word for “hemp,” which was cultivated by the Shikoku clan said to have traveled to the area on the Kuroshio Current. The ancient province of Fusa later split into three parts.

Looking at the map, it may seem strange that although 上 means up and 下 means down, 下総 (Shimōsa) is located above 上総 (Kazusa). This naming is actually related to the distance they are from the capital. In the past, as people crossed to the Bōsō Peninsula by sea from Sagami Province, it meant the southern side of the peninsula, Kazusa, was closer to the capital.

This principle of distance also applies to 上野 (Kōzuke) and 下野 (Shimotsuke). Originally known as 毛野国 (referred to as both Keno and Kenu Province), the area was then divided into 上毛野国 (Kamitsuke Province) and 下毛野国 (Shimotsuke Province). Following that, although the kanji 毛 (ke) stopped being used in the province name, it can still be found in a number of other names like 上毛三山 (Jōmō-Sanzan), the three famous mountains of Gunma Prefecture: Mount Akagi, Mount Myōgi, and Mount Haruna. It also appears in 両毛線 (the JR Ryōmō Line), which runs between Takasaki in Gunma Prefecture and Oyama in Tochigi Prefecture.

In the Hitachi fudoki, an ancient chronicle compiled in the early eighth century, Hitachi is described as a paradise blessed by fertile mountains and the sea. In the Meiji era (1868–1912), kanji from 常陸 (Hitachi) and 磐城 (Iwaki, a province established in 1868, now Fukushima Prefecture) were combined to indicate the Jōban (常磐) area, which became known as a coal-producing region near the capital. The JR Jōban Line today links this area to Tokyo.