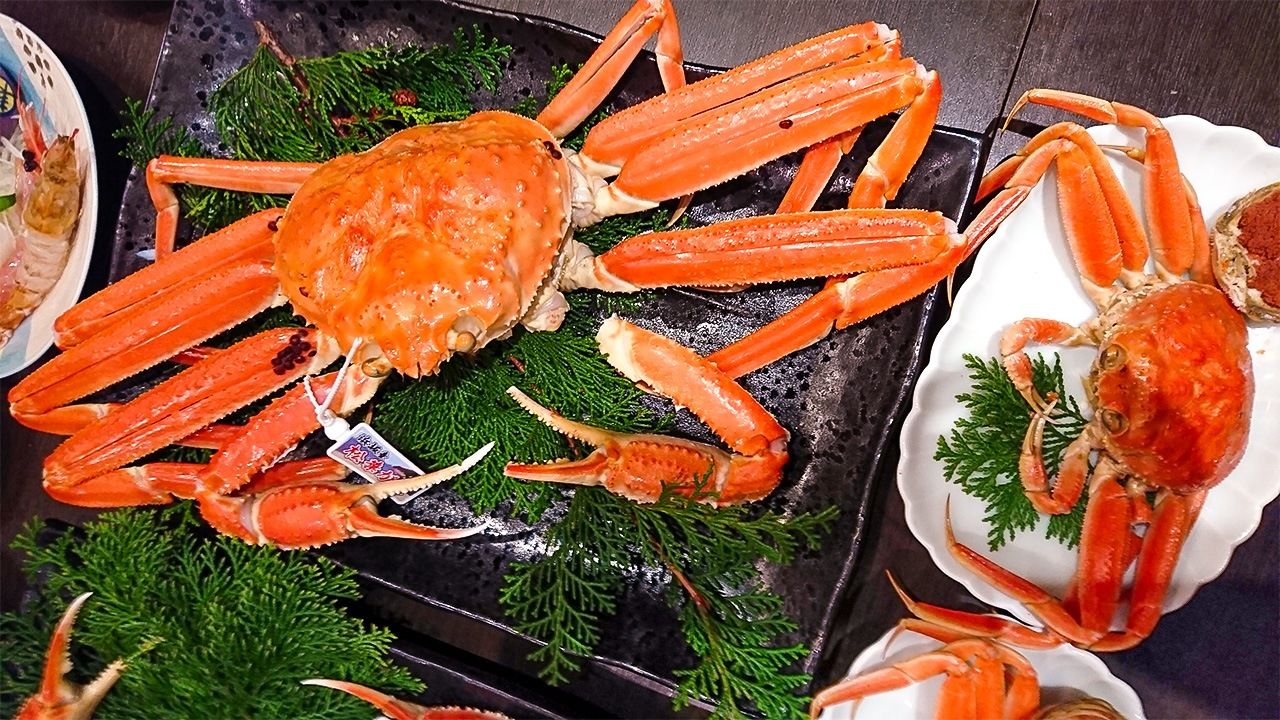 Food and Drink Economy Guide to Japan Society Culture Nov 6, 2020
Zuwaigani (snow crab), called matsubagani or Echizen-gani in different regions of Japan, is widely recognized as the king of winter culinary delights. Many people itch to savor zuwaigani as cold weather sets in, but this long-ignored crustacean only became popular comparatively recently. The author traces the path of zuwaigani from obscurity to all-around prominence as the country’s foremost winter delicacy.

Crab is a delicacy enjoyed by people all over the world. In North America and Europe, Jonah crab (Cancer borealis) and Dungeness crab (Cancer magister) are the types most commonly consumed, while in Asia and Australia, the blue crab (Portunus armatus) and its relative the mud crab (Scylla serrata) are popular, as is the Chinese mitten crab (Eriocheir sinensis) in China. But the crown for crab diversity goes to Japan, where diners enjoy multiple varieties, including horsehair crab (Erimacrus isenbecki) and Alaskan king crab (Paralithodes camtschaticus).

Snow crab (Chionoecetes opilio) in particular whets popular appetites in western Japan, where it is known as either matsubagani or Echizen-gani, depending on the region. Prices at the first auction of the year, on November 6 when the crab fishing season starts, always make the news. For example, the first crab of the year auctioned at Tottori fishing port in 2019 reached ¥5 million, an eye-popping amount even for a season inaugural auction, when prices tend to skew high as buyers seek to mark the occasion with a headline-grabbing purchase. 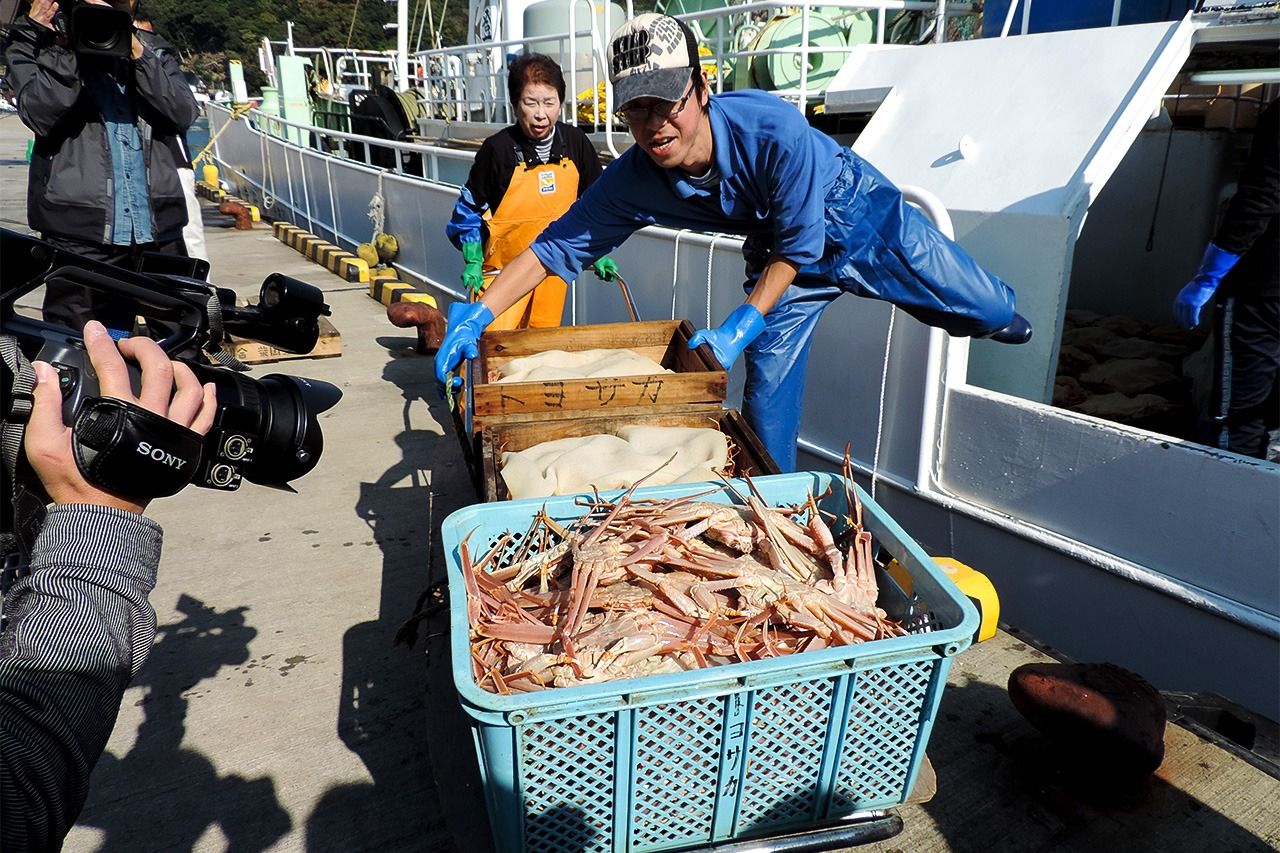 The snow crab season starts on November 6 every year. News reporters cover the first auction and headlines and television news shows trumpet the arrival of a winter delight.

Every winter, crowds descend on Sea of Japan fishing ports in the western Honshū regions of San’in and Hokuriku for the sole purpose of eating freshly caught snow crab, the biggest of which can sport a carapace over 14 centimeters wide and 80-centimeter-long legs. The pure white leg flesh tastes wonderfully sweet and the innards are a lip-smacking delight. Some regulars save up all year for a trip to snow crab country to enjoy crab in its boiled, grilled, sashimi, tempura, or nabe hotpot forms. Aficionados are especially drawn to shime, rice cooked in the nabe broth to finish off the meal. 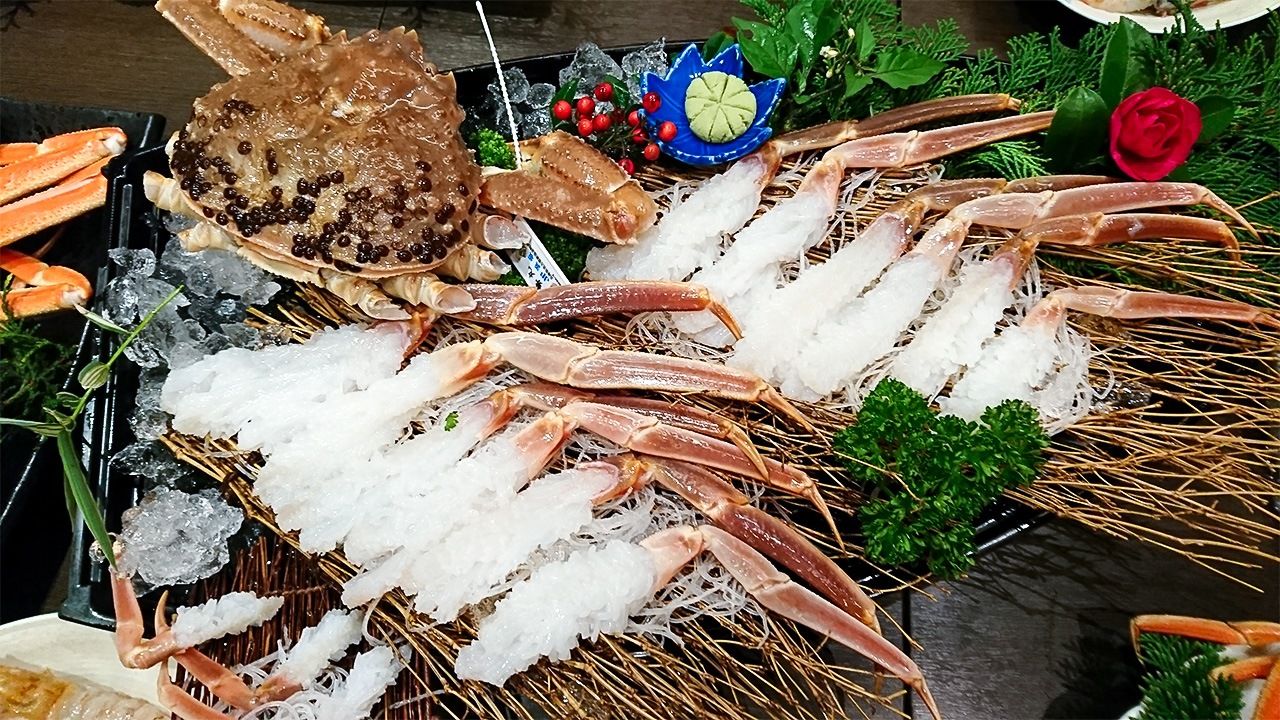 Crab’s popularity in Japan is relatively recent. It had been caught along with other seafood by vessels operating in the Sea of Japan since the eighteenth century, but being highly perishable, it could not be widely distributed and was not thought of as a commercial product. Aged fishermen recall seeing crab strewn haphazardly on the beaches near their homes as late as the 1960s, when Japan enjoyed strong economic growth. In those days, it was commonly boiled and sold by peddlers to neighboring villages. Otherwise, it was canned, eaten by children as a snack, or used as fertilizer. How did the humble crab become such an overwhelming favorite throughout the country?

On a street corner in Osaka’s Minami dining and entertainment district stands a restaurant fronted by a huge, attention-grabbing mechanical crab. This is the main branch of Kani Dōraku, a popular spot that just about everyone is familiar with, though they may never have eaten there. Kani Dōraku was founded in 1962 by Imazu Yoshio at a time when crab came in cans and very few Osakans had ever seen or eaten it fresh. 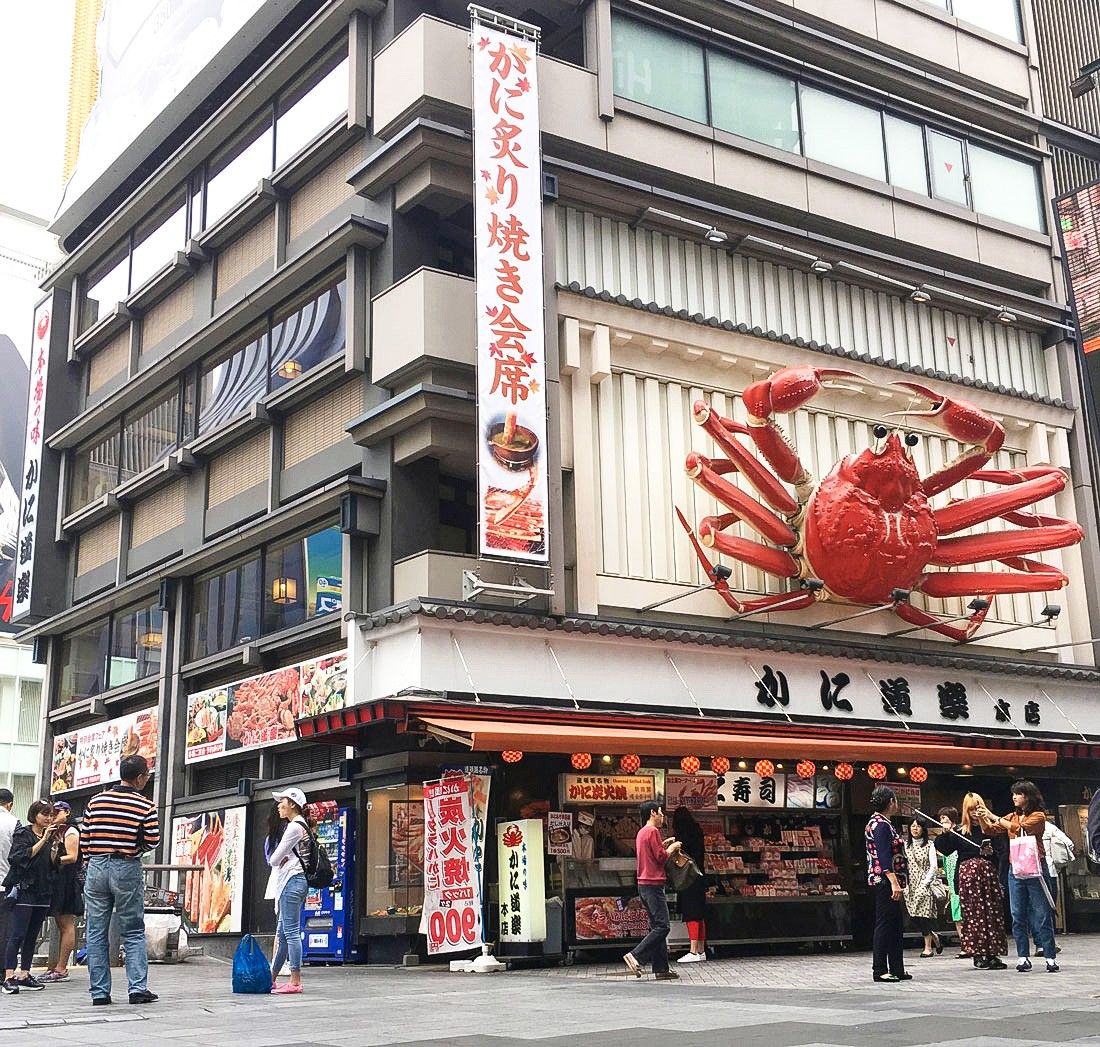 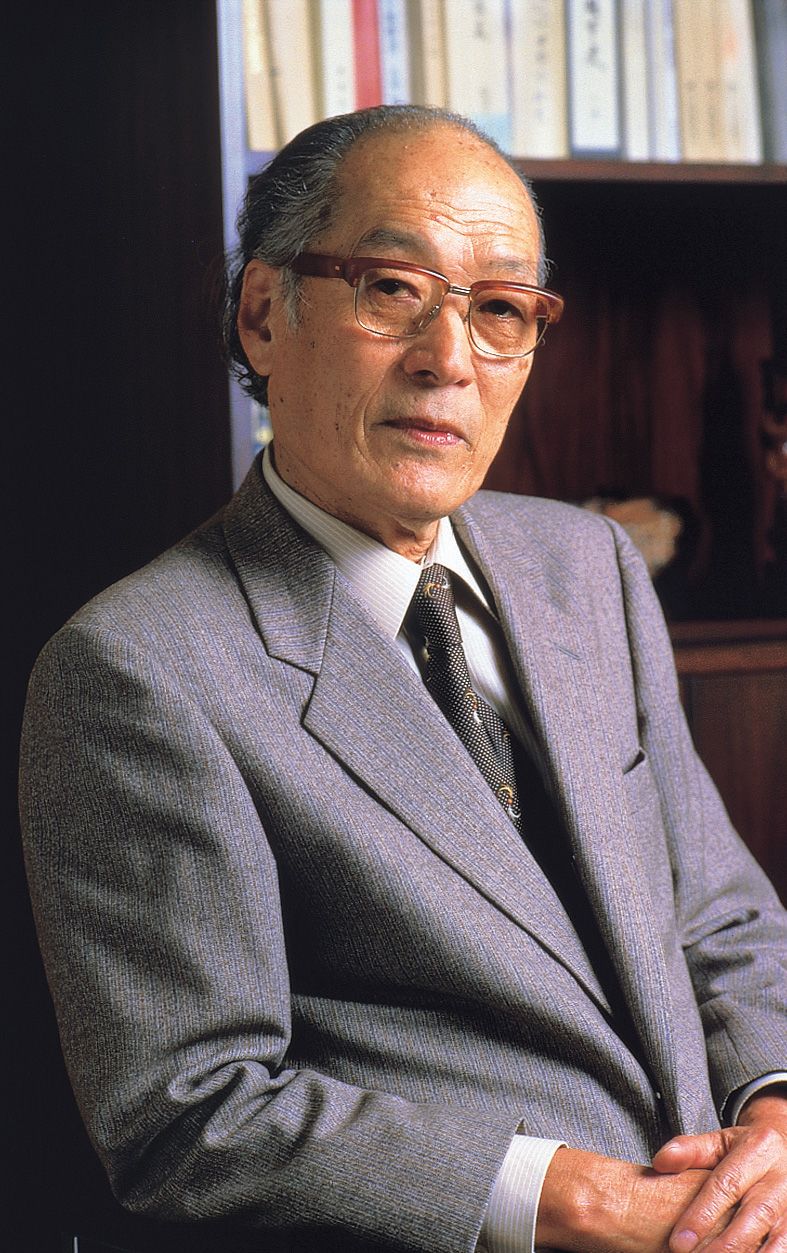 The son of a fishmonger, Imazu was born in 1915 in a crab-producing area in the northern part of Hyōgo Prefecture. Working locally as a peddler, he gradually realized that crab could be a valuable product and became obsessed with the idea of introducing it to city dwellers. In 1960, he set up a seafood eatery in Osaka that served crab in addition to fish. But since crab was only available in winter, it was not a particular drawing card at the time.

Imazu began thinking of how to get crab to his restaurant’s tables year-round. Freezing technology in those days left crab meat dry and stringy, so sub-zero storage was not an option. Taking a hint from a technique to keep flowers fresh by freezing them in blocks of ice, Imazu did the same for crab. His method involved placing live crabs in large cans, filling them with water, and freezing them to minus 30º Celsius. He then shipped the crabs by truck to Osaka, stored them in freezers, and served the thawed crab meat in his restaurant in summer, making the dish available year-round.

The next step was to develop menus using crab meat. Boiled crab alone was not sufficiently enticing to become the restaurant’s trademark dish, so Imazu tasked his chefs to come up with new ideas. They developed the crab nabe, later dubbed kani-suki, and at long last, he opened Kani Dōraku in 1962. Company annals record that kani-suki took off like a rocket: Osakans, who have a reputation as gourmands, fell in love with the dish at first bite. 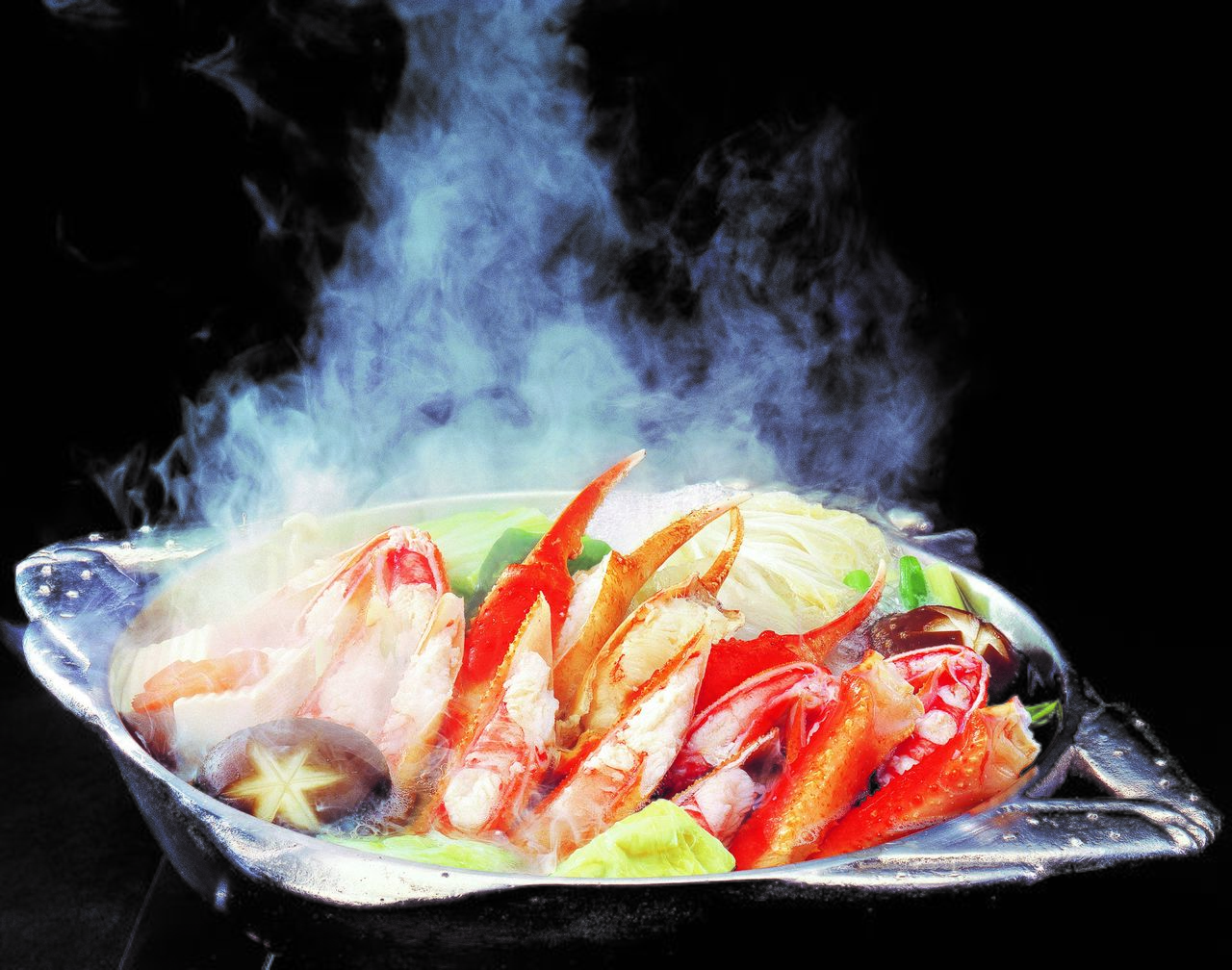 Noting Kani Dōraku’s success, newspapers around the country began reporting on the opening of the crab fishing season. Television and magazine features whetted urban dwellers’ interest in crab, which soon became an aspirational food. The next thing anyone knew, city folks had begun to converge on western Japan fishing ports come winter to eat crab. The red-hot domestic economy of the late 1980s and a growing gourmet boom led to overfishing, fewer crabs, and soaring prices. When an Osaka department store put up two crabs for sale at ¥200,000 each in 1991, they were quickly snapped up. Things had clearly gotten out of hand.

That is not to say that crab fishery officials and the government’s Fisheries Agency were standing idly by. As prices ramped up in 1970, limits on the fishing season were imposed and more emphasis was placed on grading before catches were auctioned off. In general, fish auctioned at fish markets are sorted according to quality, which determines their value and signals that fishermen expect intermediate wholesalers to pay accordingly.

Crab has come to be graded into increasingly narrow niches as catches have dwindled. For example, at Shibayama in Kami, Hyōgo Prefecture, crab is graded into over 250 different categories before it is auctioned off. Crabs are measured for size and weight and carefully checked for missing claws or legs, attractiveness of carapace color, state of molting, and scratches or other imperfections. Grading takes place in the middle of the night, over the six to seven hours between the time the fishing vessels dock and unload their catch and the start of the auction. A good haul can bring in nearly 3,000 crabs per vessel. Seeing fishing crews and their whole families grading the crab in the freezing winter cold, one can understand the high prices crab commands. Crab graded by value in that manner makes its way via intermediate wholesalers to our tables. 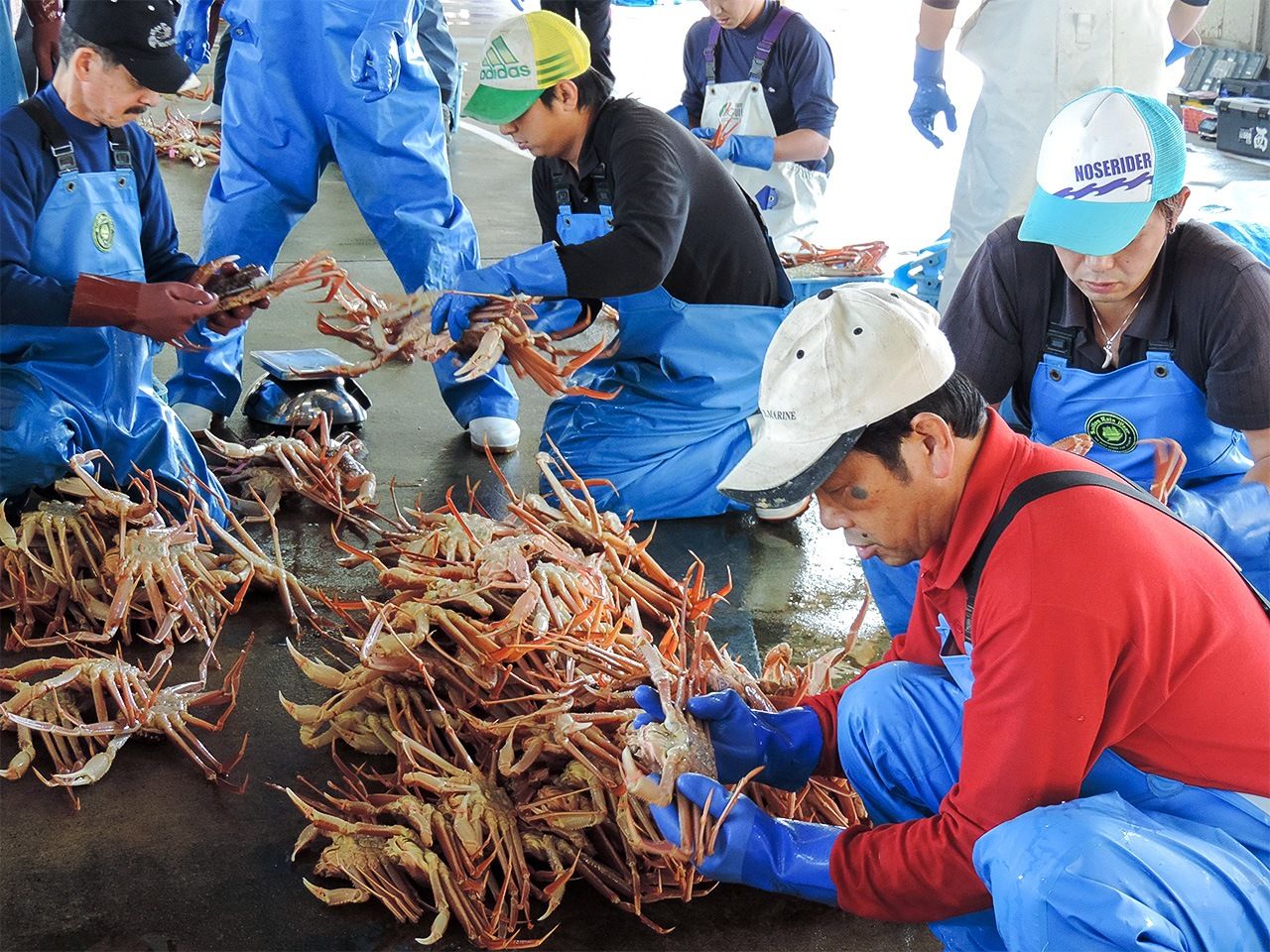 Sorting snow crab at Shibayama fishing port. The crab is carefully graded by value before being auctioned off.

Stringent grading successfully established product value recognized throughout the crab fishing industry. But because it is so expensive, crab billed as caught in the Sea of Japan but actually caught in other Japanese waters or abroad began appearing on the market. More misrepresented product on the market would negatively affect the price of the genuine article and sure enough, prices plummeted when markets in Fukui Prefecture were flooded with crab marketed as Echizen-gani. This also impacted auction prices and distressed fishermen who were hauling in the genuine article. They got together and started tagging their catch with yellow tags bearing the name Echizen-gani in 1997. Other fishing ports soon did the same, and by the early 2000s, most San’in and Hokuriku fishing ports were auctioning their catches after tagging them with place of origin tags. Crabs with tags identifying them as Taiza-gani from Kyoto Prefecture, Tsuiyama-gani and Shibayama-gani from Hyōgo Prefecture, Tottori matsubagani, or Kanō-gani from Ishikawa Prefecture are now a common sight at fish market auctions. 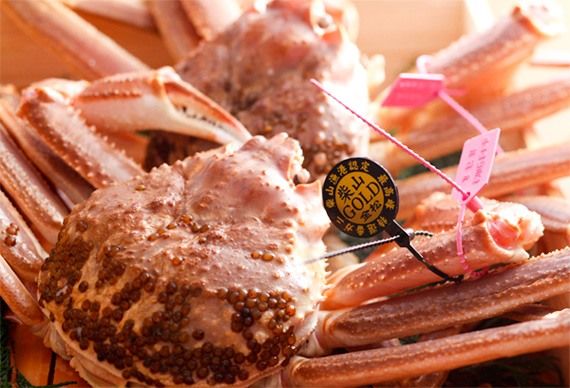 Tags were originally for identifying crabs’ place of origin so that fishermen could tell, but mass media, local governments, and tourism operators began seeing them as a mark certifying the crab’s domestic provenance. The tags gradually became a means of visually representing quality. Tagged crabs may be a costly luxury item, but to consumers who want to eat the real thing, they are worth it in terms of satisfaction.

Combining the Pleasures of Relaxation and Fine Dining

Snow crab is also caught in Tōhoku, Japan’s northeastern region, and the northernmost island of Hokkaidō, but the spotlight is on crab from San’in and Hokuriku. Places like Kani Dōraku and other restaurants specializing in crab source directly from there, but only a trickle is sold in urban areas since most of it is consumed locally. To highlight local production, many inns and family-run hostels in the region make crab dishes their selling point. In season, Kinosaki Onsen bills itself “the kingdom of crab,” and many other establishments in well-known onsen hot spring towns like Yumura (Hyōgo Prefecture), Misasa (Tottori Prefecture), Awara (Fukui Prefecture), and Wakura (Ishikawa Prefecture) up and down the Sea of Japan coast serve crab dishes in season, too. Visitors combine the best of both worlds, enjoying crab feasts and relaxing in soothing onsen waters. Given that winter is not prime tourist season, crab is a real lifesaver for these spas. 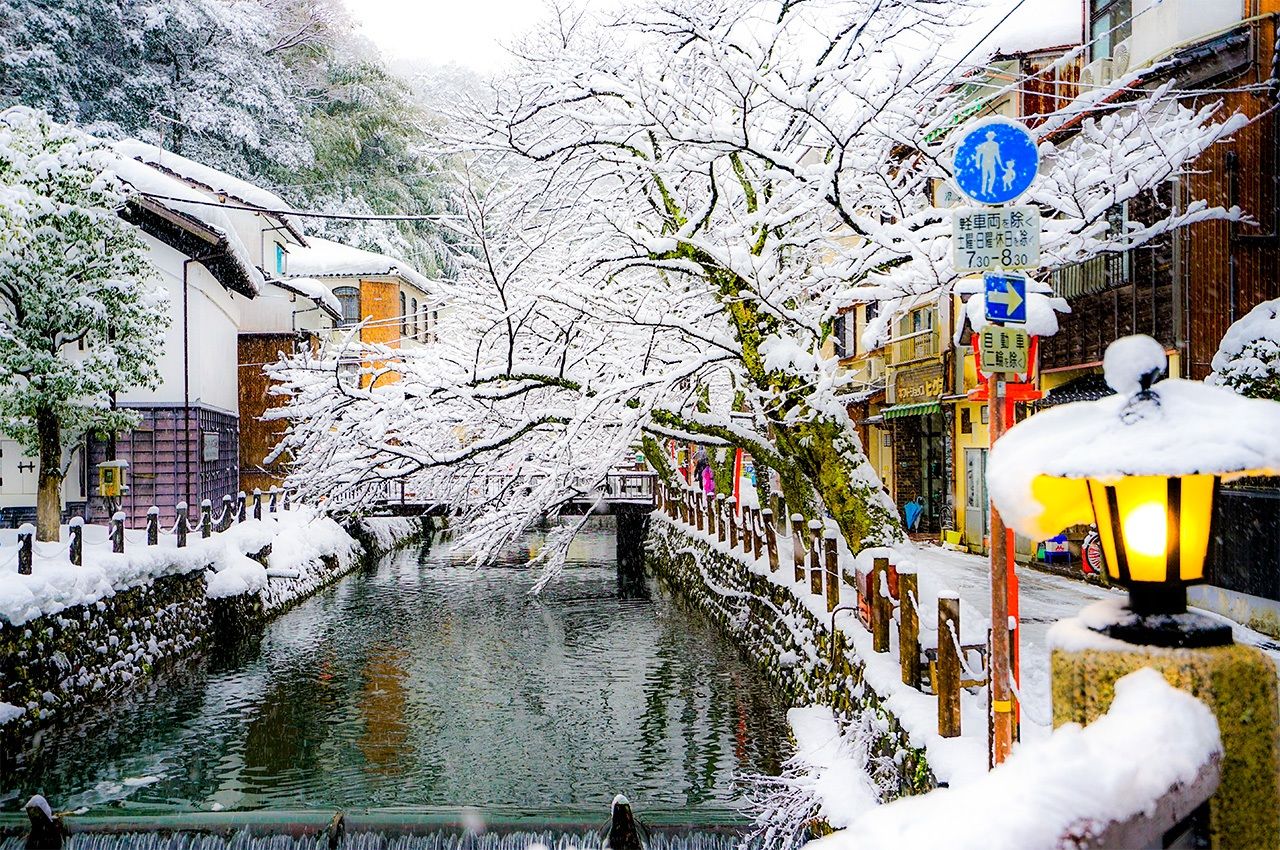 Crab has become a proud part of Japan’s culinary culture and I hope it will retain its prime position. But catches have been steadily declining, down nearly 80% compared to the 1960s, so we face the urgent task of protecting and managing resources. Snow crab takes 10 years to mature to adulthood and is truly a gift from the sea. We should express gratitude for nature’s bounty and fully appreciate delicious crab. 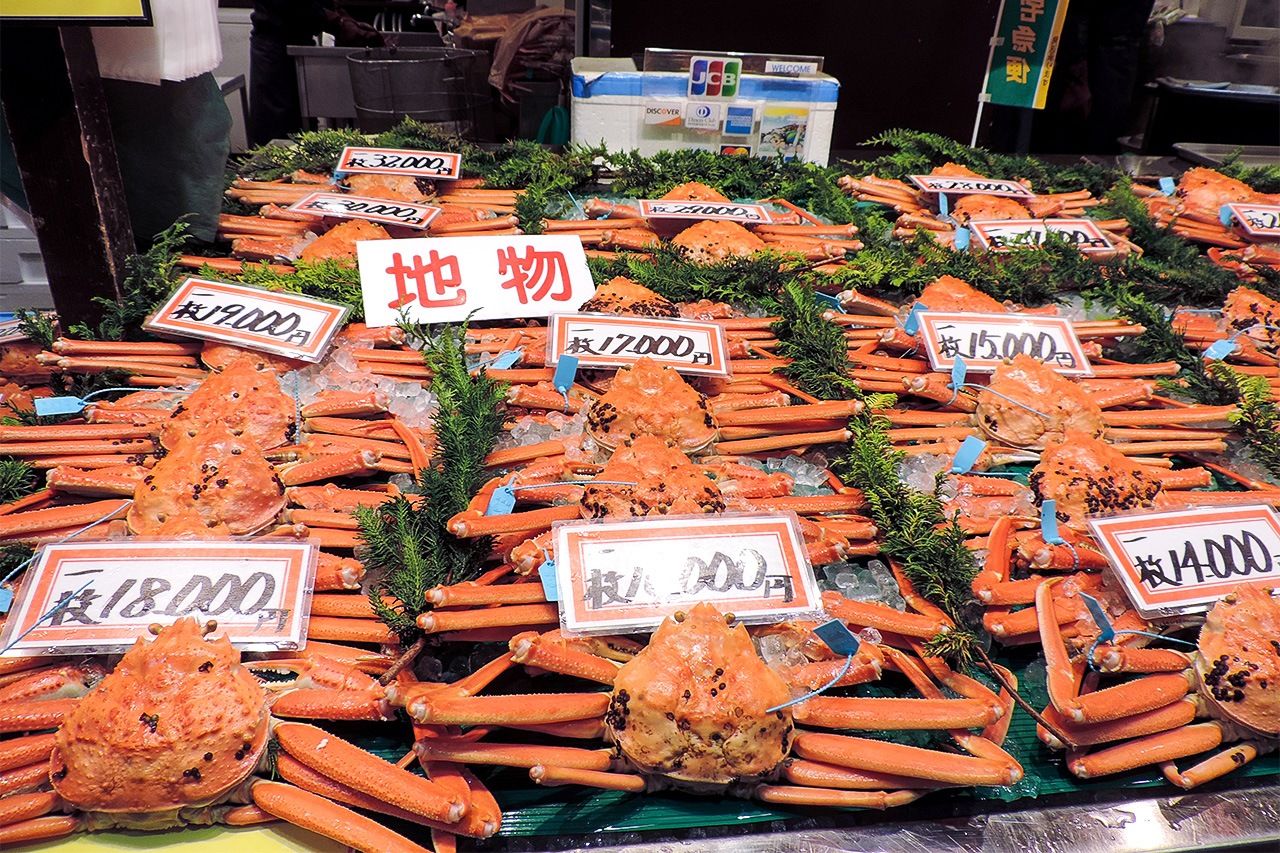 A fish shop at Kanazawa’s Ōmichō market. Kanō-gani from fishing ports all over Ishikawa Prefecture is a popular product during the November to March season.

(Originally published in Japanese. Banner photo: Snow crab boiled whole. The specimen on the left is a hefty male weighing 1 kilogram. To the right is the smaller female, the delight of crab gourmets who revel in its innards. All photos courtesy of the author except where otherwise noted.)