Fukushima’s Suetoku Pottery Moves Beyond 3/11 Toward the Future

Society Disaster Culture Mar 11, 2019
Ōborisōma pottery has a history going back more than 300 years in the town of Namie, Fukushima Prefecture. At one point, Ōborisōma pottery was in danger of dying out due to the Great East Japan Earthquake and the meltdowns triggered at Fukushima Daiichi Nuclear Power Station. Here we introduce a family of potters taking fresh steps to start their workshop anew in Kōriyama, carrying the tradition into the future.

“When I left my hometown after the disaster and went to live in other places, including in Europe, I realized how beautiful a place Namie was and how unique Sōma-style pottery is.”

These are the words of Sue Masanori, aged 44, of Suetoku, a pottery that makes Ōborisōma ware. Sue hails from the Ōbori area of the town of Namie, on the Pacific coast of Fukushima Prefecture. Only 10 kilometers from the Fukushima Daiichi Nuclear Power Station, this area is still designated by the Japanese government as a “difficult-to-return” zone; former residents remain unsure when they will be allowed to return again. 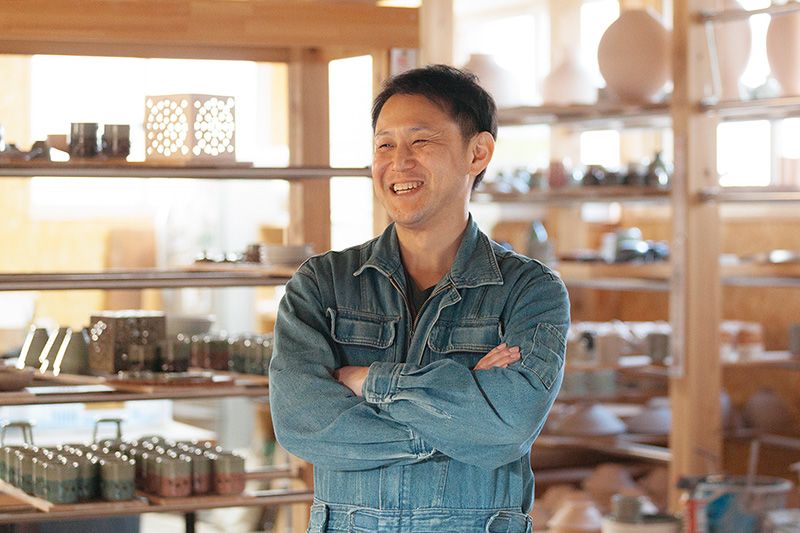 Sue Masanori is the tenth generation of the Suetoku family, a line of potters going back centuries.

Ōborisōma ware, designated as a Traditional Craft Product by the Japanese government, dates back to the early Edo period (1603-1868), when Ōbori was a part of the Sōma Nakamura Domain. Before the Great East Japan Earthquake in 2011, there were 25 potteries in Ōbori, but they are now scattered around Fukushima and other prefectures. Some potteries, already in financial difficulties or lacking a successor to take over, have been forced to close their doors. However, about 10 potteries are trying to re-establish their businesses at a new location. The Suetoku Pottery chose to relocate to Tamura in the city of Kōriyama, about 60 kilometers inland from Namie. Following renovations to the business’s temporary premises in 2016 the new workshop was finished, enabling Suetoku Pottery to make a fresh start. 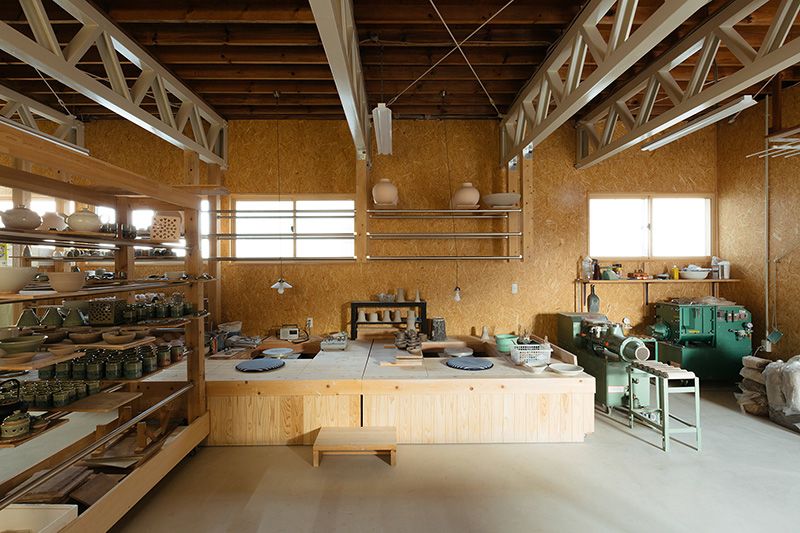 The new workshop, where amateurs can also try their hand at making a pot on the wheel. 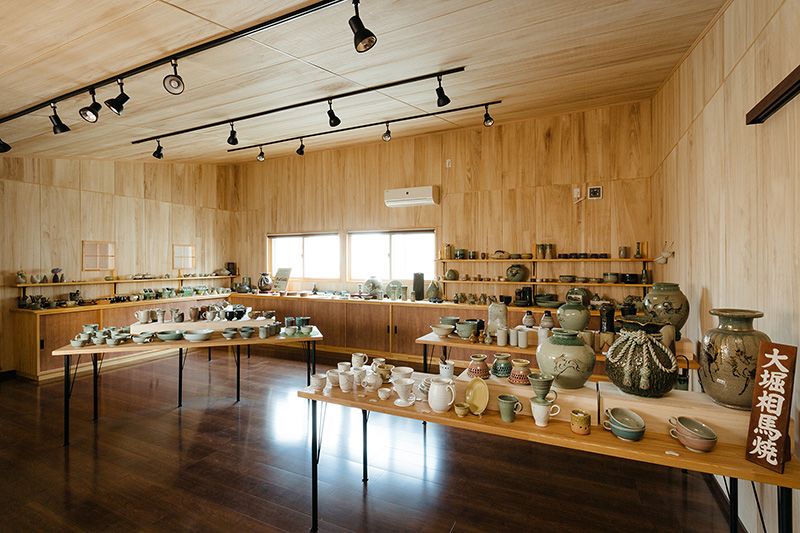 A gallery and shop are located upstairs from the workshop.

“There has probably never been a style of pottery loved by the local community as much as Ōborisōma ware,” Sue said. If you opened the cabinets of households in Namie, you’d have found them full of Sōma ware teacups, teapots, rice bowls, and sake-drinking sets. Sōma ware was often used for presents given to guests at wedding receptions as well as other types of gifts, and also for vases for arranging flowers to decorate alcoves or for household Buddhist altars. 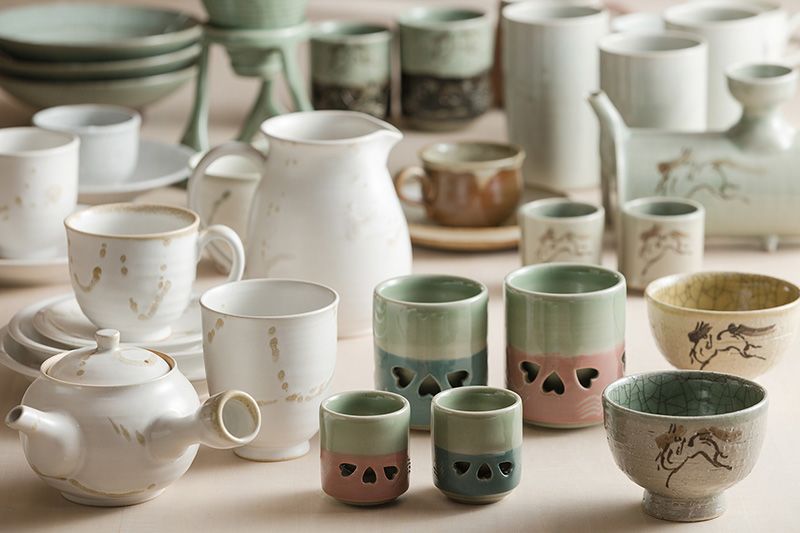 The gallery displays all kinds of Sōma ware, including plates, tea cups, and flower vases.

One feature of Sōma ware that greatly appeals to the local people is the hand-painted motif of a running horse, known as hashiri-koma in Japanese. In the city of Minamisōma, a northern neighbor of Namie, a thrilling festival called Sōma Nomaoi, or “wild horse chase,” is held every summer. Local residents’ attachment to horses has always been extraordinary. The running horse motif is an auspicious design based on the sacred horse of the Sōma domain. The unconstrained and free style of brushwork has a subtle charm to it. 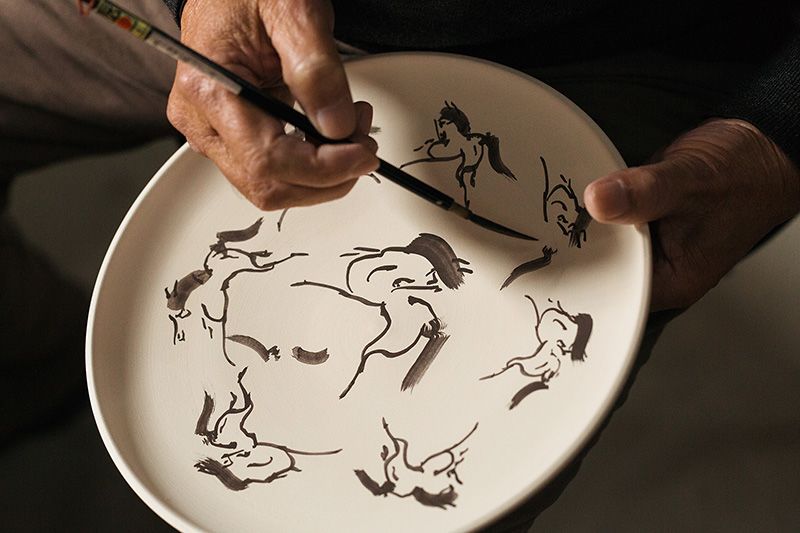 The hashiri-koma motif is always facing to the left, considered a good omen in Japan.

Another special feature of Sōma ware is an effect called aohibi, or green cracks, where a crazed effect similar to the veins of a leaf forms in the pale green glaze of the pot. This occurs when the clay and glaze shrink at different rates during the cooling-down process after a firing and a fine network of cracks appears on the surface of the pot. Masanori said that in the quiet after a firing has finished, the pinging sounds of the glaze cracking can be heard hundreds of times. Sōma potters from long ago are said to have referred to those clear notes as the sounds of Sōma pottery being born. 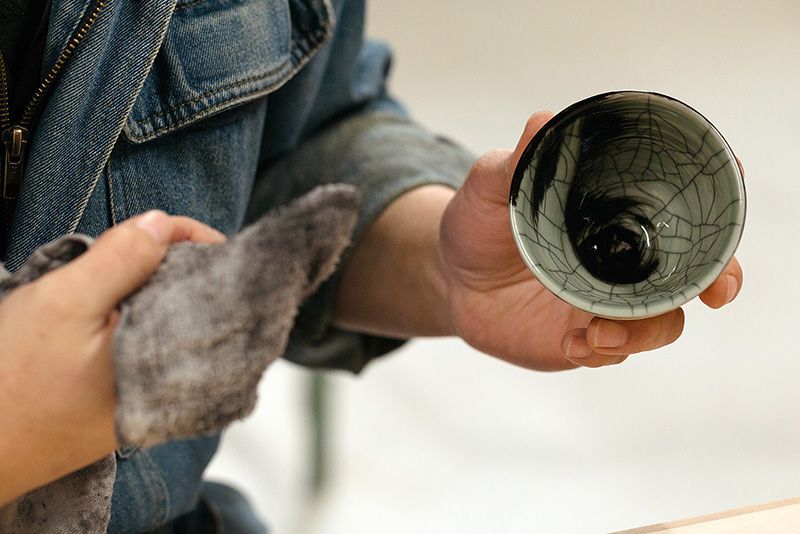 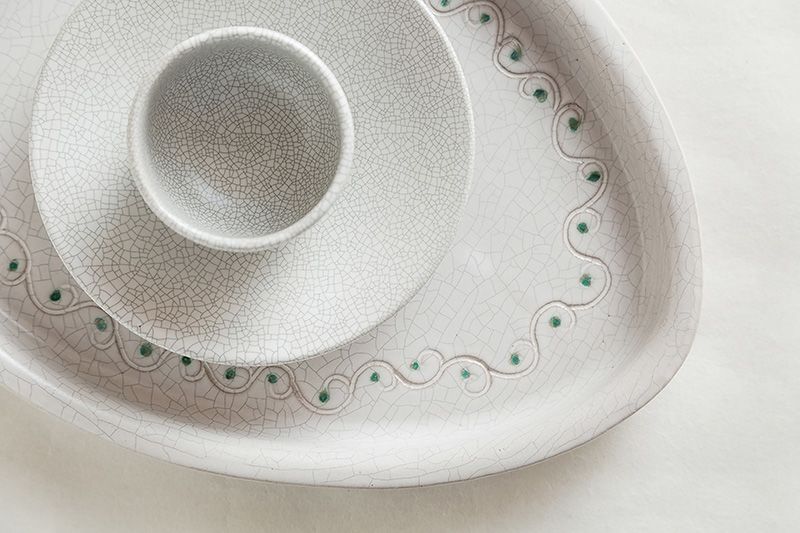 Cups and plates with a modern feeling brought about by the crazed effect in the white matt glaze.

Sōma ware also has a distinguishing feature in its structure. A smaller pot is made and put inside a larger one, creating a space like that in an insulated flask when this multilayered piece is fired. Hot liquids won’t cool down so quickly, but the cup remains comfortably cool to hold. Such an idea can be expected in the Tōhoku region, with its harsh winters. 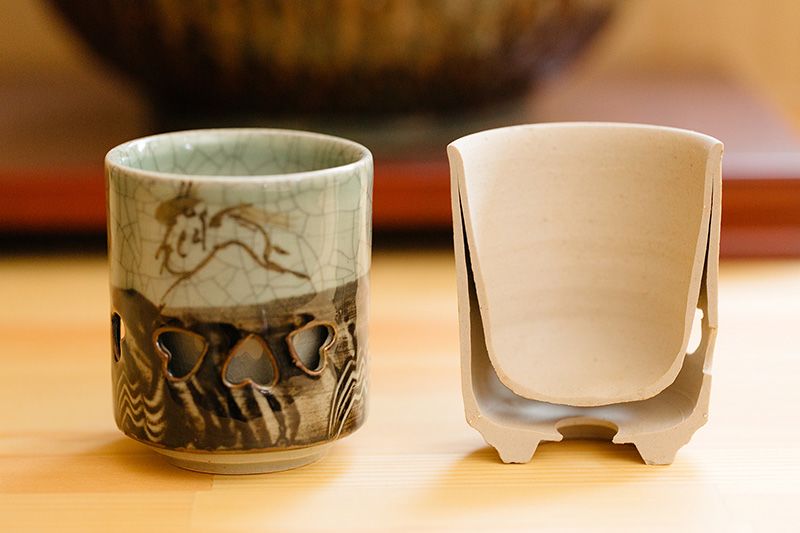 A double-layered tea cup and a cross-section of it. The heart-shaped holes are called nami-chidori, or zigzagging plovers, and can represent a couple forging through heavy waves together. They are a symbol of conjugal harmony and the achievement of shared goals.

Pottery to Heal the Spirit

Sōma ware has long been a familiar item in everyday life for local people of Namie, but Masanori admits with all honesty that he doesn’t think Sōma pottery suits the lifestyles of the younger generation anymore.

“For those people who had to leave their hometown due to the earthquake and the tsunami and live the life of an evacuee,” he stresses, “these pots represent a special identity. That’s why we shouldn’t change anything—we must keep to the conventional style of Sōma ware. To ensure that the pottery continues on, we intend to keep trying to increase new demand for the pottery.” 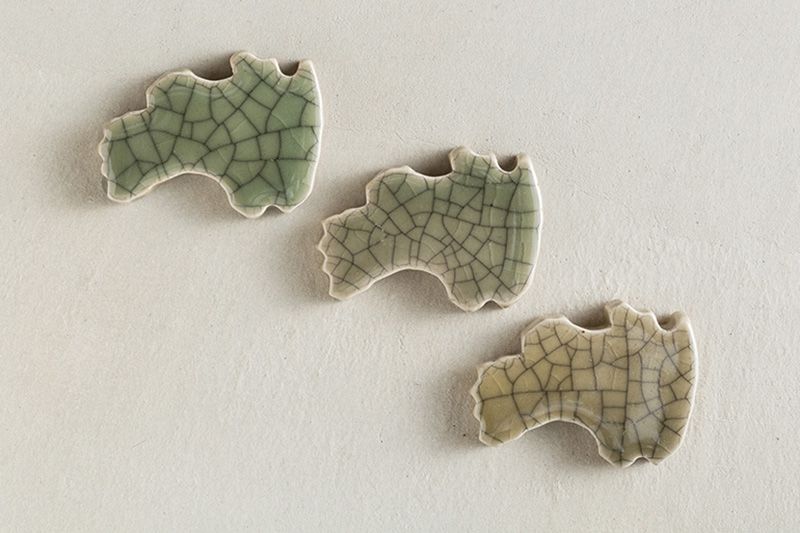 Chopstick rests and paperweights in the shape of Fukushima Prefecture.

The new Kōriyama workshop used to be a tent factory before the renovations. Although it is only a third the size of the facility they used before the 2011 disaster, they now have a large kiln as well as a shop upstairs. They have also started a new venture, with a special area for amateurs to learn how to make pots on the wheel. Four family members run the business: the ninth-generation head of the house, Tomiji, his wife Chieko, Masanori, and his wife Kaori. Last summer, Masanori and Kaori were blessed with a baby boy. 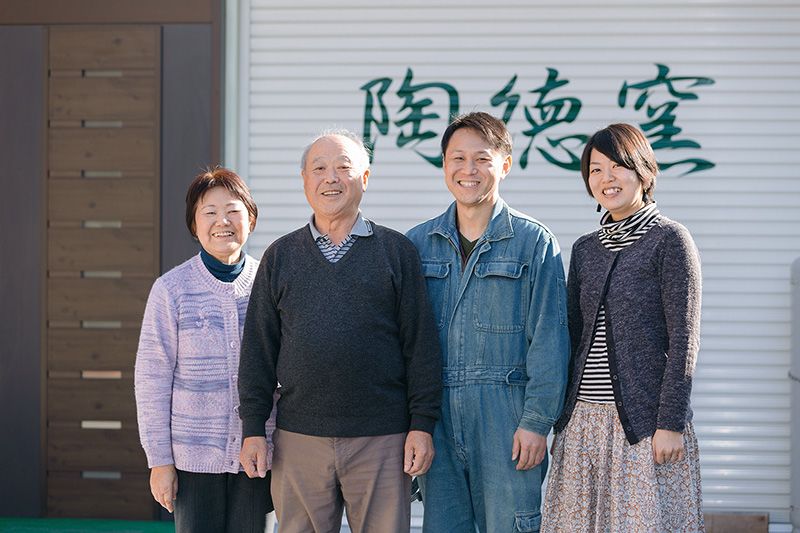 Now that nearly eight years have passed since the 3/11 disaster, this family of five is at last able to lead a settled life. “You probably think it’s been a long time, but each of us has gone through different things in that span,” says Masanori.

As early as the autumn of 2011, Tomiji and Chieko found a place in Kōriyama and started producing pottery again, ahead of the other kilns. “I realized that it would not be easy to return to Namie, and I thought that if we were going to make a move, we should make it quickly. I decided to take a gamble and have a go,” recollects Tomiji. 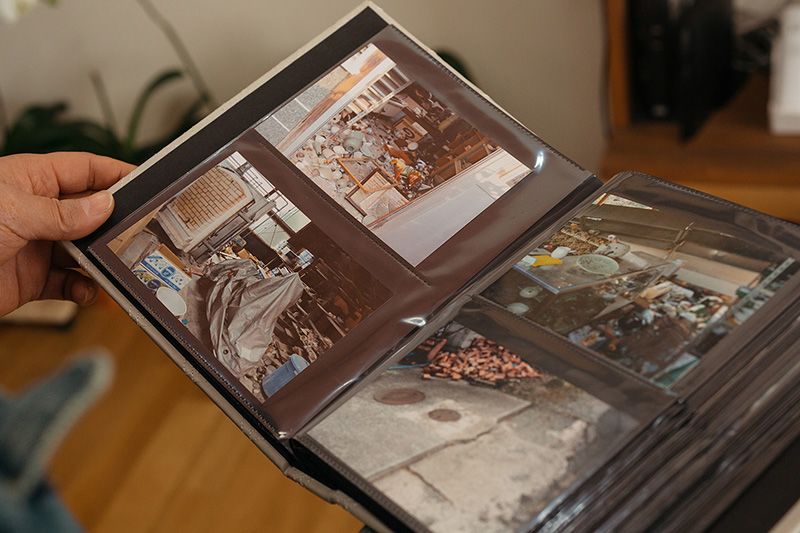 Scenes showing directly after the earthquake. Nearly all the pots were smashed to pieces by the quake.

However, Masanori left his parents and evacuated to Saitama Prefecture, farther to the south. Looking back, he says that due to the shock of the radioactive contamination, he felt he couldn’t possibly consider going back to Fukushima again. When he was helping to rescue the victims of the disaster in his role as a member of the local fire brigade, he heard the sound of the explosion at the nuclear power plant. That marked the start of a time when he says he witnessed  his hometown descending into an increasingly strange atmosphere. 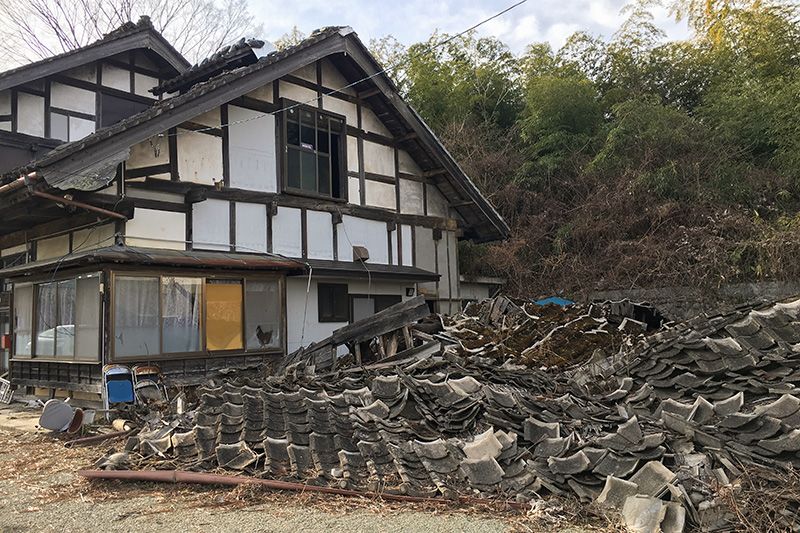 Suetoku Pottery in Namie, as taken in January 2018. Tomiji and Chieko still visit each month to spray weed killer and do other maintenance on the grounds. They patiently await the day when they can return home. (© Yamaguchi Noriko)

Masanori wanted to quit pottery at first. But thanks to time he spent in Europe, a total of nearly one year over three stays, he began to change his mind. Act for Japan.be, a group of overseas artists who had learned of the nuclear plant accident, gave him an opportunity to make pottery in France, Spain, and Belgium from the spring of 2012. “Being absorbed in clay during that time helped to heal my spirit naturally,”says Masanori with a smile. The interest people overseas expressed in the technique for making double-layered pottery was very encouraging to him. Finally, in 2014, he made the decision to go back to Kōriyama, where his parents were living. 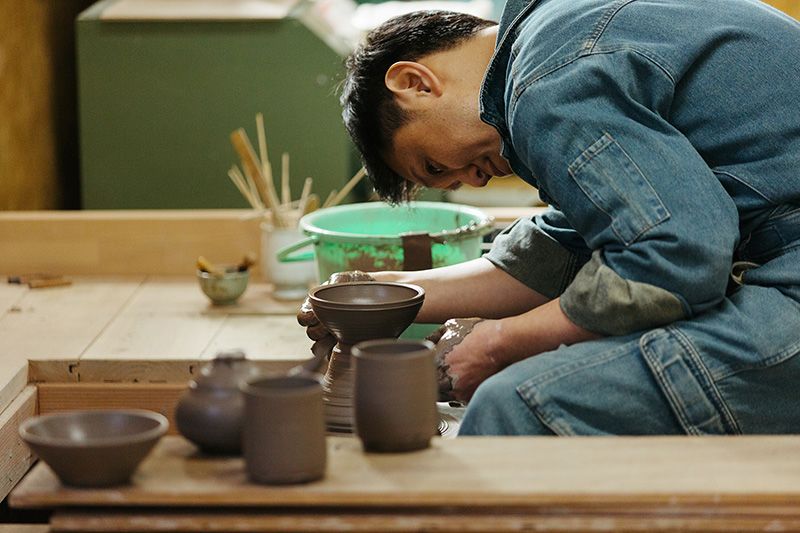 Masanori is totally absorbed as he works on the wheel.

It has not all been smooth sailing since the new workshop was completed in February 2016. That April, Masanori suffered a cerebral infarction. Following six months of rehabilitation, though, he was able to deal with this stressful incident and return to normal life. Kaori moved to Fukushima permanently after first participating in volunteer work there after the 2011 disaster. Masanori and Kaori were married in March 2017, and in 2018 Kaori gave birth to a baby boy. “We have finally managed to make a proper fresh start” says Masanori, appreciating his newfound happiness. Yet he also states, “At the same time, we’re now facing a crucial stage in our lives.” 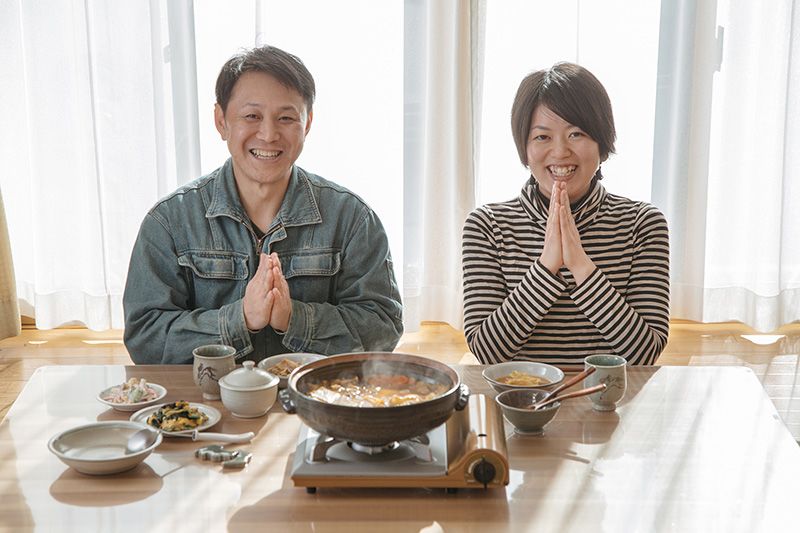 Masanori and Kaori enjoy a meal together. All the pottery in use is Sōma ware, a perfect match for their peaceful way of life.

A piece of Sōma pottery commemorates the birth of a child, with the date of birth engraved alongside imprints of the hands and feet). The model is Masanori’s baby son, Haruki.

Although everything needed to make pottery is now in order, new challenges have arisen. When Suetoku operated in Namie, they enjoyed the support of the local community. Now, though, new clients and markets for the pottery have to be found. Masanori says that doing things by half-measures can actually produce much worse products; the traditional-style pots have reached an apex of sorts over a long time, thus achieving a special kind of beauty. However, he is trying to incorporate fresh ideas, many from his wife Kaori, to develop new products. Recently the Suetoku Pottery has linked up with a Nanbu cast-iron workshop in Iwate Prefecture for a collaboration between the two Traditional Craft Products lines. 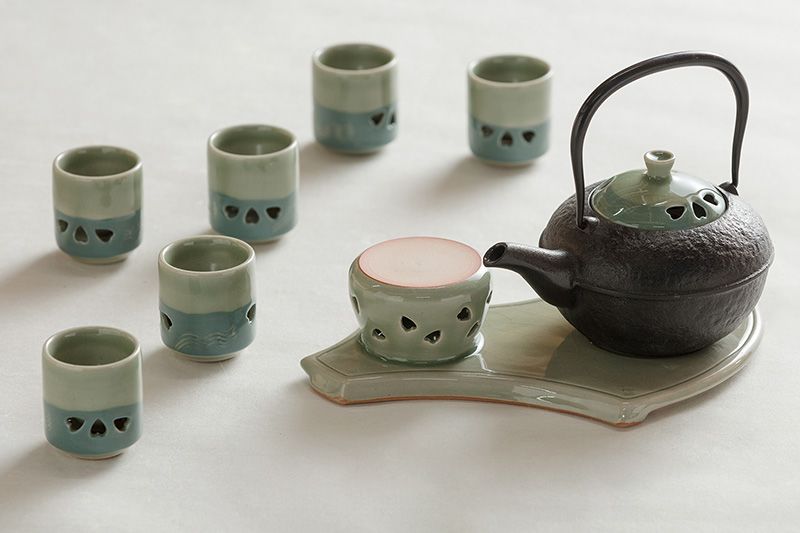 A tea set made as a trial item together with the Nanbu cast-iron workshop. The pottery lid and the teacups employ the double-layer method.

“There are many new ideas that I want to try out. I feel sure Sōma ware still has many new possibilities we haven’t seen yet,” Masanori says with vigor as he welcomes the arrival of a new spring, the eighth since the disaster. 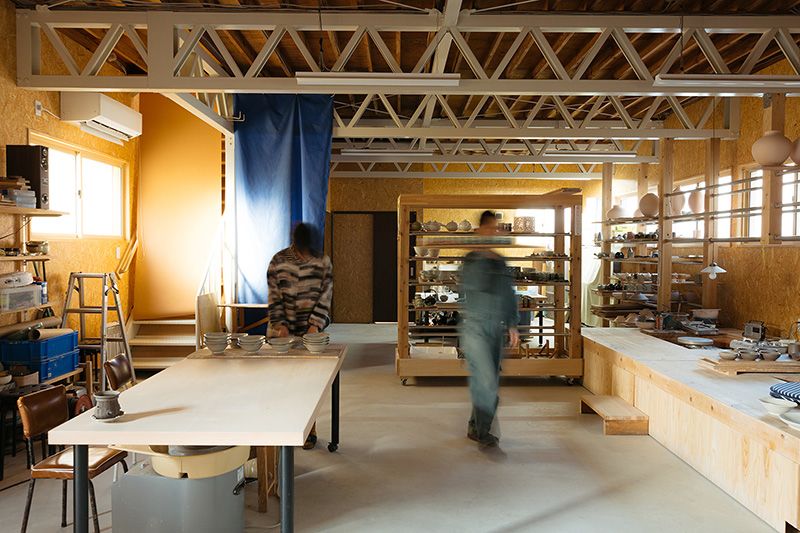 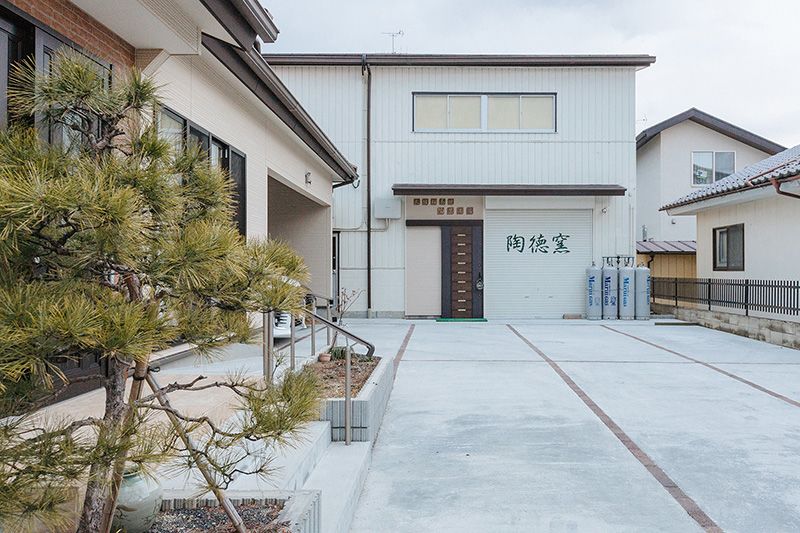 (Originally published in Japanese. Interview and text by Yamaguchi Noriko. Photos by Yamazaki Yoshinori, except where otherwise indicated.)