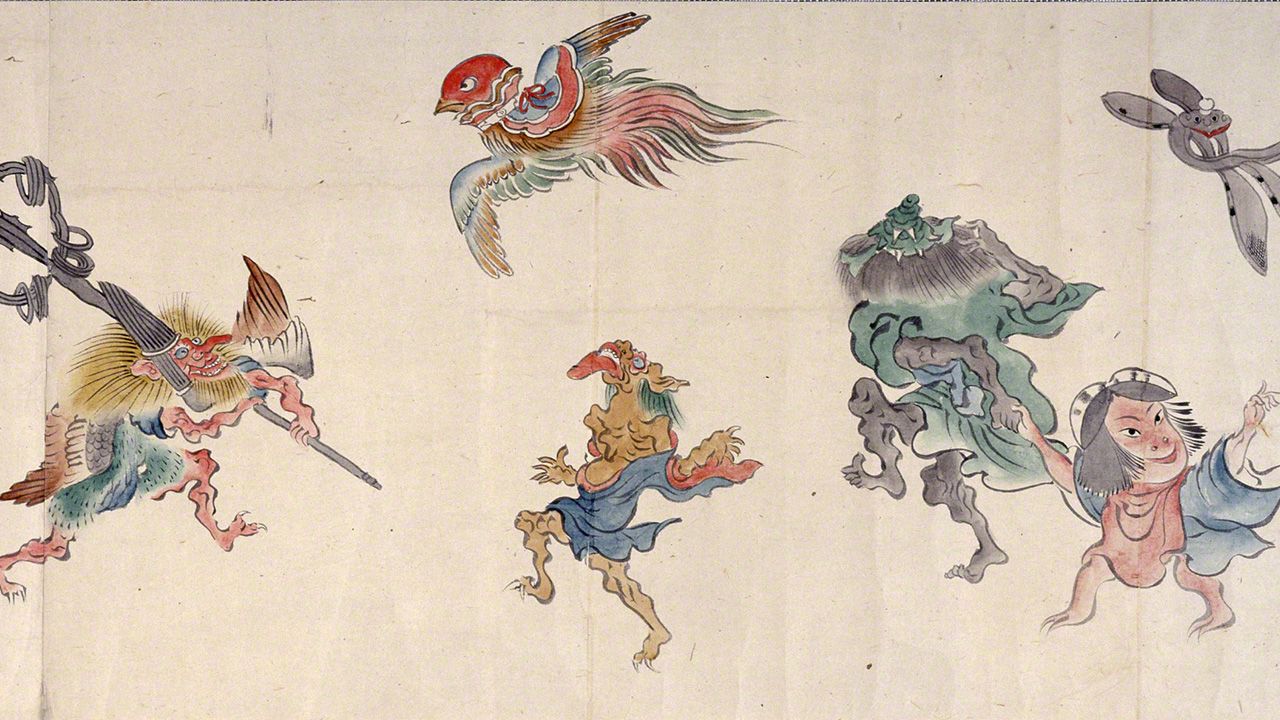 Culture Entertainment History Manga Mar 15, 2022
Yōkai are a beloved presence in Japan, from anime like Gegege no Kitarō, Yōkai Watch, and Demon Slayer to the recent fad for the pandemic-busting Amabie. Ghosts and strange creatures exist abroad as well, but Japanese creators possess a knack for transforming them into entertaining characters. How did terrifying presences evolve into staples of leisure and play here in Japan?

Throughout human history, people have occasionally reported strange happenings that defy rational explanation—the reappearance of individuals who have died; the sightings of strange creatures; voices inexplicably heard when no one is around; strange lights or fires adrift in the gloaming. These sorts of encounters inevitably provoke unease and fear.

Japanese folklore holds that these strange phenomena are all the doings of yōkai. The word has a long history in Japan, but it only became widely used in the Meiji period (1868–1912) thanks to the educational efforts of Inoue Enryō (1858–1919), a philosopher and debunker of superstitions. Long used in the field of folklore studies, the word yōkai was truly popularized by the manga artist Mizuki Shigeru (1922–2015). His folklore-based comic series Gegege no Kitarō debuted as an anime in 1968, sparking a fad that introduced the concept of yōkai as popular characters to huge numbers of young Japanese. But the trend’s roots extend far further back in the historical record. In fact, Japanese first began to enjoy yōkai as entertainment in the Edo period (1603–1868). 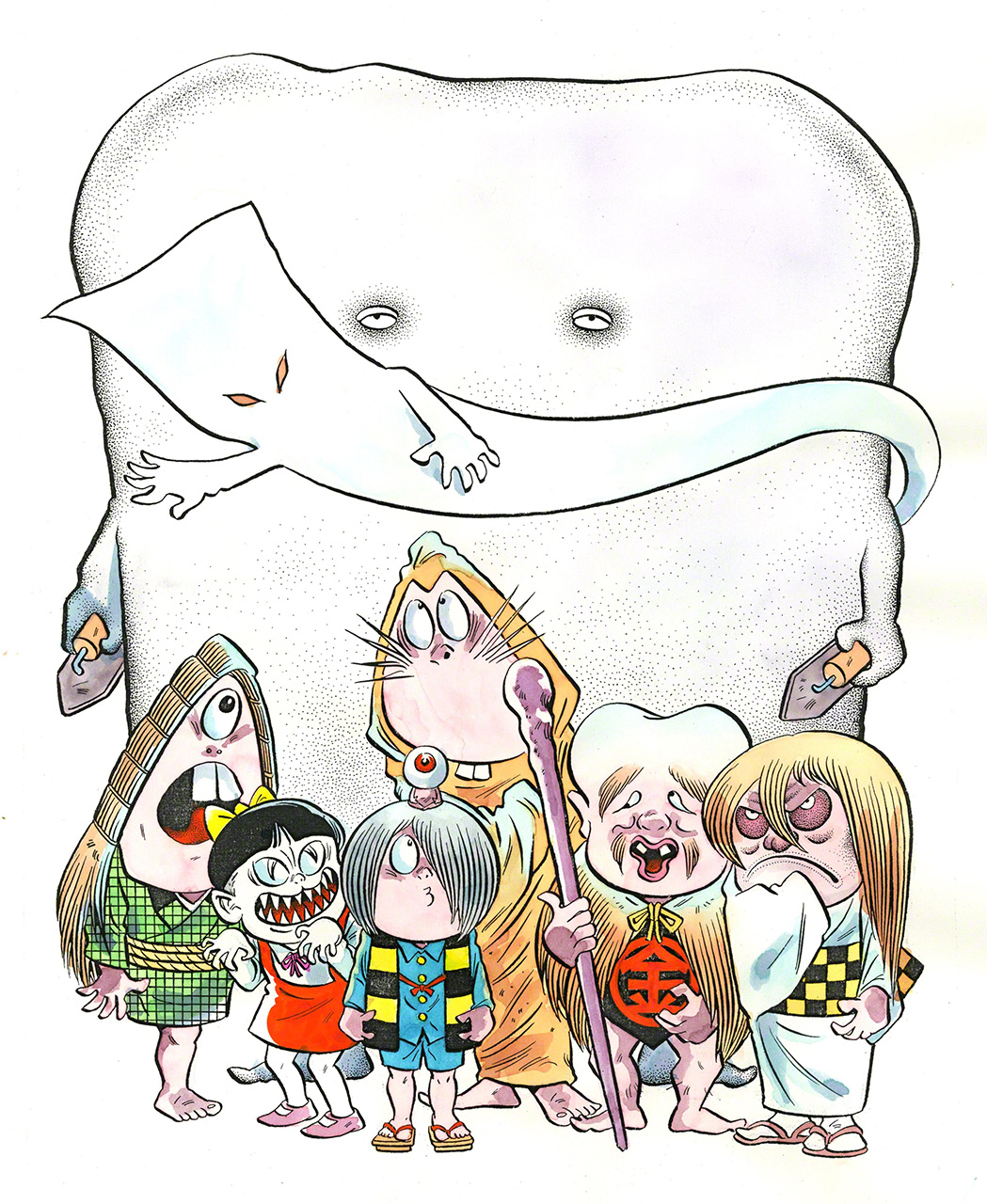 Back in the Edo period, yōkai were known as bakemono—shape-shifters. The etymology comes from the fact that animals such as foxes and tanuki (raccoon dogs) were long believed to possess the ability to change form to trick humans, but it also encompassed yōkai with fixed forms, such as kappa (river goblins) or rokuro-kubi (snake-necked women). In essence, it referred to anything outside the bounds of normal living things.

Edo-period portrayals of a kappa (left) and a rokuro-kubi (snake-necked woman) with an inu-gami (dog spirit). (Courtesy International Research Center for Japanese Studies)

The word bakemono widely appeared in kusazōshi, a form of publication that corresponds to modern-day picture books and manga. There it almost inevitably referred to fantastic characters. This association between bakemono and the imaginary can be seen in a popular saying of the day, “beyond Hakone lies nothing but bumpkins and bakemono.” This is a testament to the high regard in which Edoites thought of themselves, “bumpkins” describing anyone not familiar with the rules and ways of the pleasure quarters, and bakemono disparaging anything beyond the borders of Edo’s sphere of influence and sophistication. Other popular phrases featuring the concept included “holding on to money is as hard as finding a bakemono,” and “There’s no such thing as a bakemono or a teetotaler.” 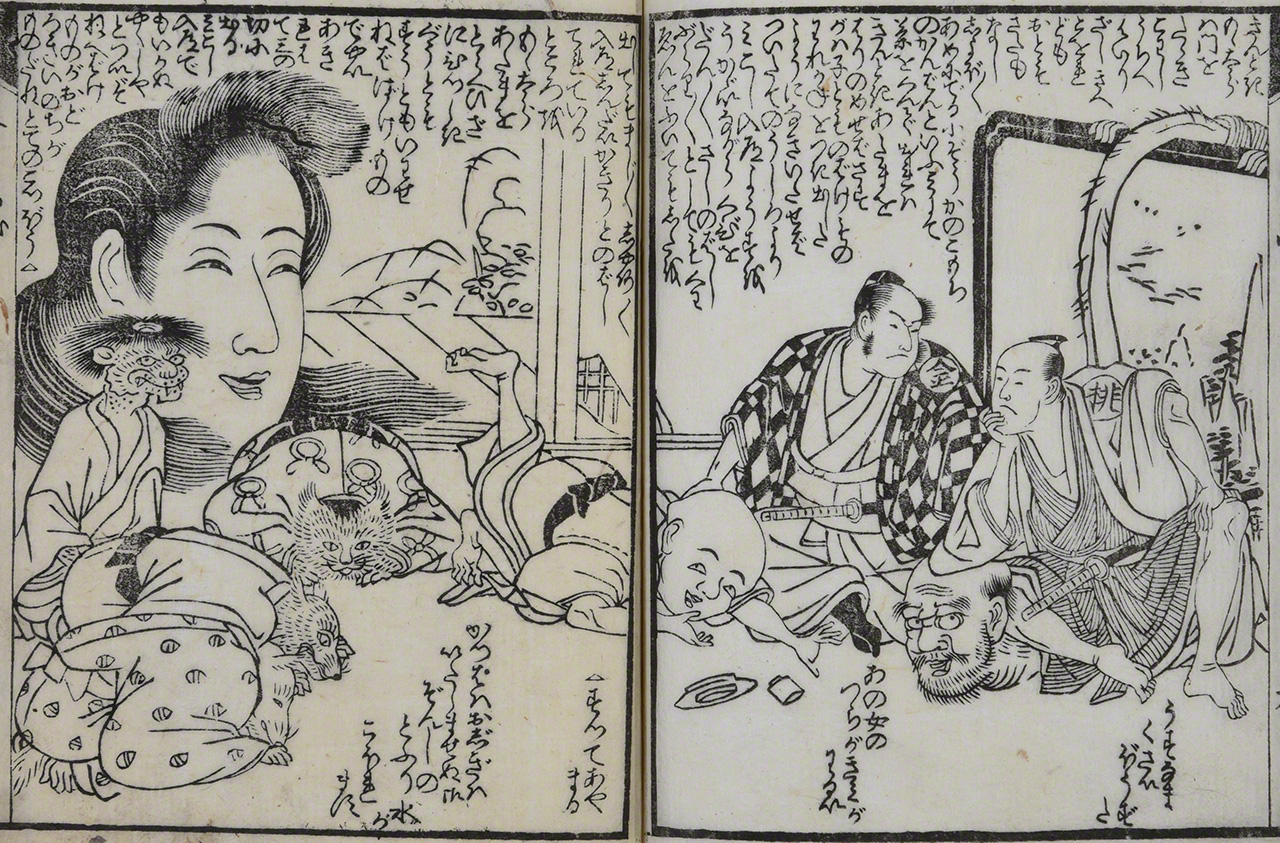 Sannin kodakara-bakashi (The Peach-Eating Treasure Trio) is a kusazōshi featuring two of Japan’s most famed folklore heroes, Momotarō and Kintarō, on an adventure. They visit an old temple and are attacked by bakemono, which they defeat. (Courtesy Kagawa Masanobu) 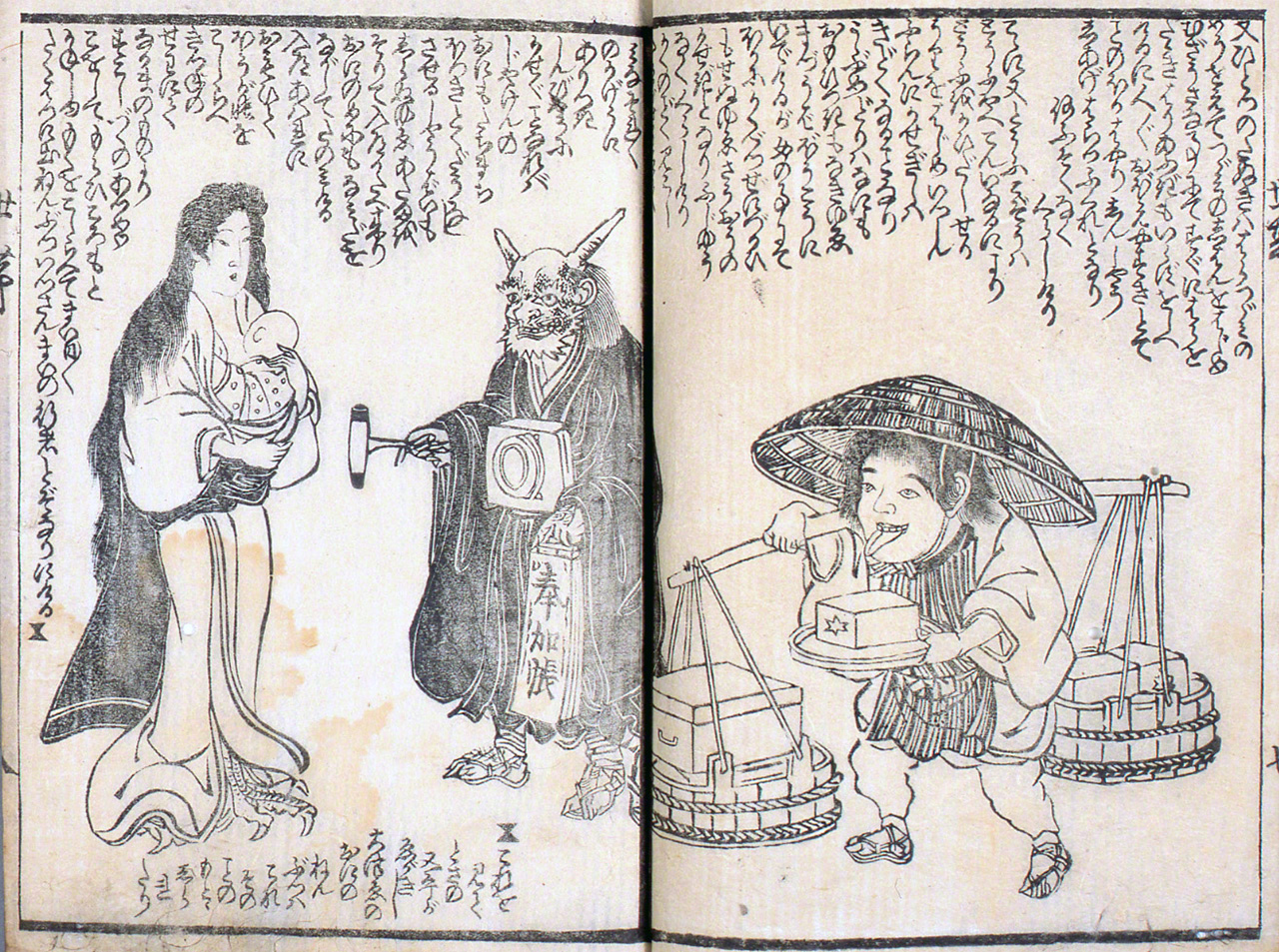 It’s easy to imagine premodern folk as seized by superstition, but at least when it came to a big city like Edo, rational and realistic thinking seems to have been common. What distinguishes people of this era is that they did not throw bakemono away. Rather, they took the attitude of “real or not, life is more interesting with bakemono in it, so let’s have fun with them.” In other words, they enjoyed these fantasies as fantasies.

This “fictionalization” of bakemono, which is to say yōkai, began in the mid–Edo era, around the eighteenth century. It was driven by a shift in the way cityfolk thought about nature. Until the middle ages, Japanese saw nature as an untamed and fearsome force. Yōkai were things one encountered in natural habitats such as the mountains, rivers, or seas―in other words, realms not under human control. Yōkai served as warnings to humans of the dangers of the natural world.

In the Edo period, those who lived in rural areas were as fearful of the forces of nature as ever, and may have truly feared the yōkai in turn. But cityfolk were another matter. They lived apart from nature. Using money to purchase whatever foods and vegetables they wanted, whenever they wanted, they were divorced from the cycles of joy and sorrow accompanying the feasts and famines that defined the lives of farmers and fishermen. As urbanites’ fear of nature waned, their sense of the “reality” of the yōkai did, too.

The field of natural history grew by leaps and bounds in the eighteenth century. As part of a plan to promote national development, the shōgun Tokugawa Yoshimune (1684–1751) ordered surveys conducted of natural resources all across Japan. The field of herbalism flourished along with this project. Similar to Western approaches to the field, specialists cataloged and categorized natural things with an eye towards understanding their properties and their medicinal values. This resulted in an explosion of literature in the form of encyclopedias of animal and plant life. Proponents also collected and preserved a great many specimens, contributing to the development of an offshoot of natural science called yakuhin-e, a precursor to pharmacology.

At the time yōkai were treated as a type of living thing, and as such were often cataloged alongside real-life plants and animals in encyclopedias and books of the era. It’s another example of how they were seen as an element of the natural world. But scientifically cataloging the yōkai stripped away their mystery, deflating the sense of fear surrounding them. Categorizing them alongside animals portrayed them as lesser than human beings, “demoting” them to things that could be controlled. I call this phenomenon Edo’s Yōkai Revolution.

In 1776, an artist by the name of Toriyama Sekien published a yōkai encyclopedia called Gazu hyakki yagyō (trans. Japandemonium Illustrated). It symbolizes this dramatic shift in the way yōkai were seen.

Yōkai were originally conceived as “explanations” for inexplicable phenomena first and foremost, with their “looks” treated as secondary. But the appearance of Sekien’s yōkai encyclopedia changed that. Now yōkai became intertwined with distinctive appearances. And attaching names to forms made them identifiable and classifiable, in much the manner of modern-day Pokémon characters. 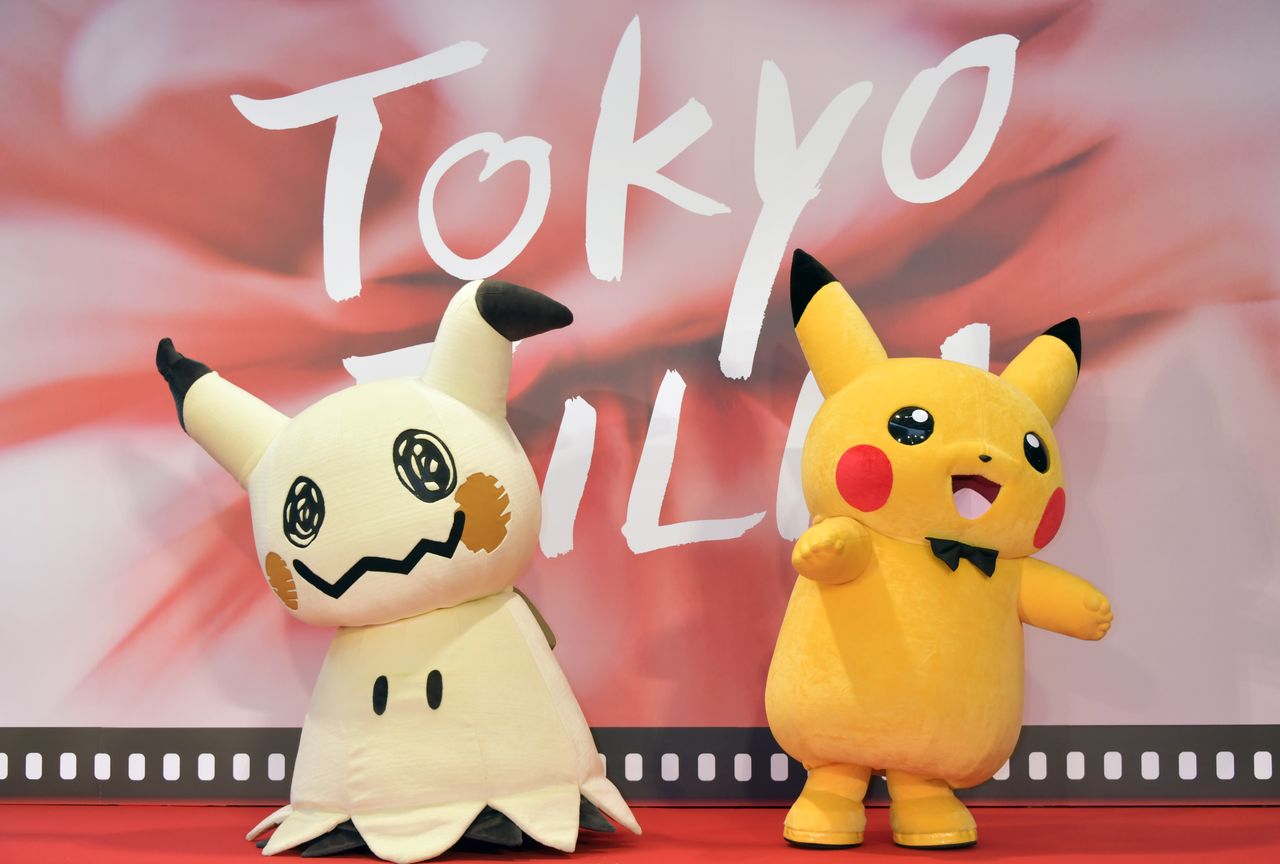 Mimikyū (left) and Pikachū on the red carpet at the 2017 Tokyo International Film Festival. Currently, there are 901 distinct characters in the Pokémon series. (© Jiji)

Toward the end of the Edo period, a style of woodblock print called omocha-e (toy pictures) appeared. Intended for children, many featured illustrations of bakemono. They portrayed numerous bakemono on a single sheet, making them a type of yōkai encyclopedia in and of themselves. 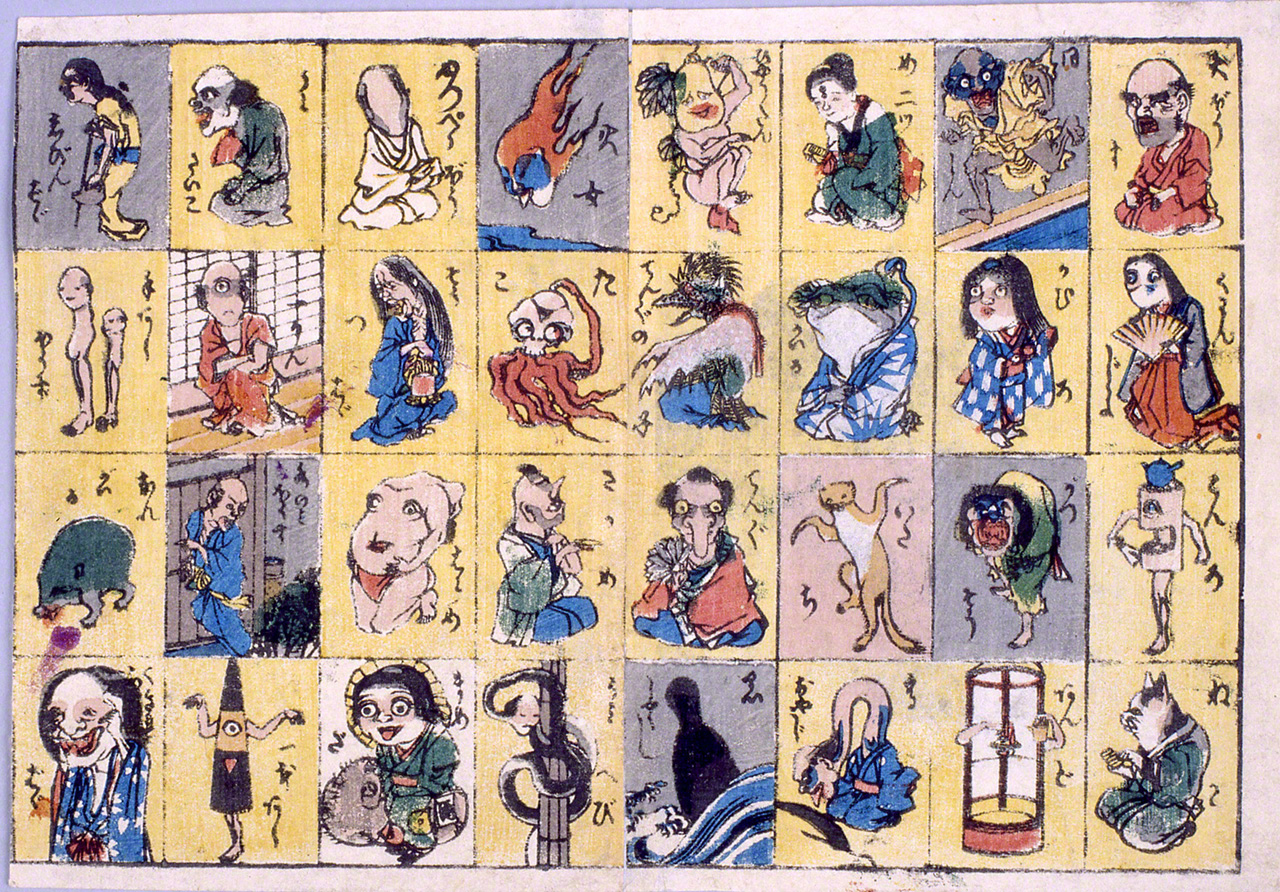 Numerous yōkai portrayed on a single sheet in what is known as a bakemono-tsukushi (“Many Bakemono”) style of omocha-e. (Courtesy Hyōgo Prefectural Museum of History)

Bakemono were also used as subjects for a variety of playthings. Sugoroku, a board game featuring bakemono motifs, and karuta cards game in which children matched up images of bakemono with their names, are also steeped in yōkai encyclopedia sensibilities. 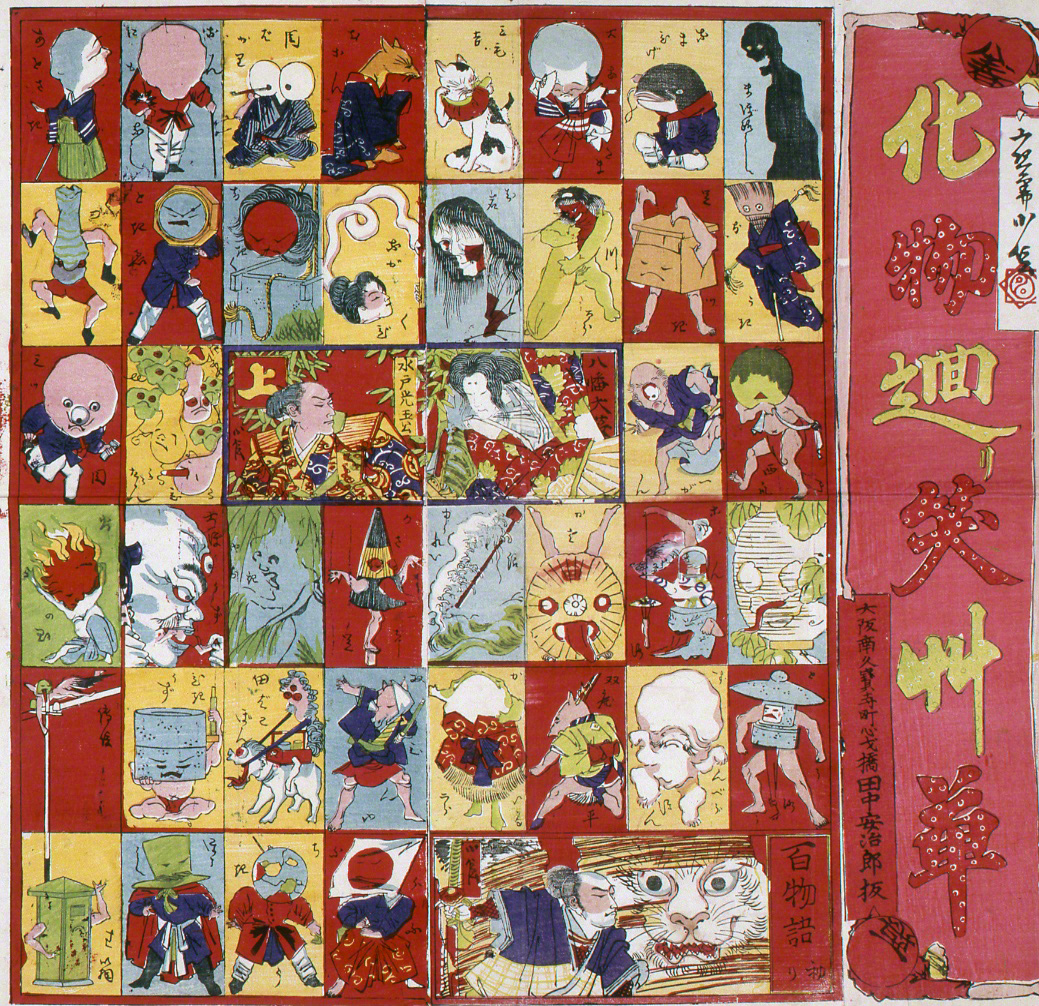 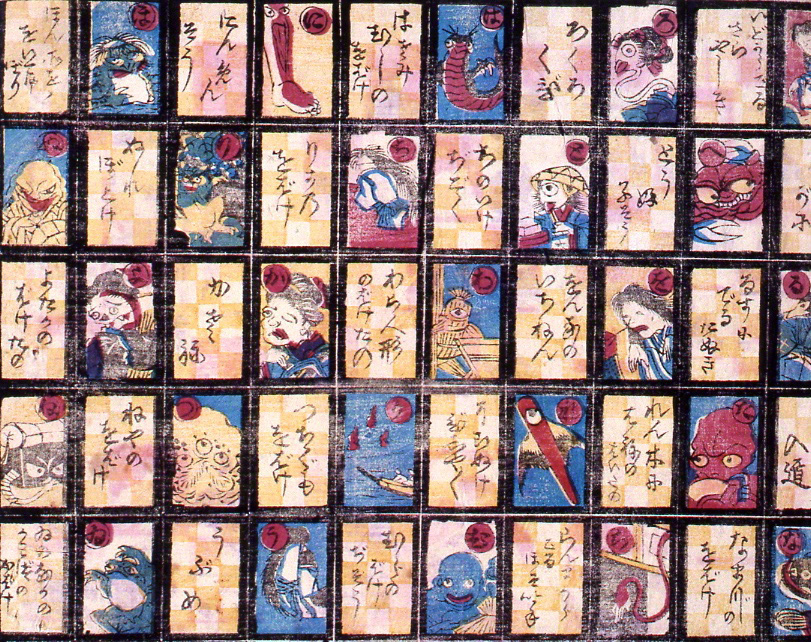 Obake ekruta cards, circa 1860. The cards with text were read aloud, and the first player to snatch the corresponding yōkai picture took it. Some 130 years before the birth of Pokémon, Japanese children were collecting monsters. (Courtesy Hyōgo Prefectural History Museum)

The modern-day game of Pokémon involves adventuring through a fantasy world to collect creatures of various types, with the goal of assembling a complete “Pokédex”—an encyclopedia of Pokémon. This makes it a direct descendant of all those Edo-era playthings that were based on yōkai encyclopedias. Proof of this can be seen in the fact that there are even direct homages to yōkai among the Pokémon menagerie, such as Kyūkon (Ninetails), which is based on a nine-tailed fox from folklore.

That said, there is a fundamental difference between bakemono and Pokémon. Edo-era bakemono totally lack a distinctive characteristic of the Pokémon: their kawaii cuteness. Edoites saw bakemono as humorous, but they did not imagine them as cute. In contrast, today even formerly fearsome presences such as kappa or tengu (mountain goblins) tend to be portrayed with cute, Pokémon-esque appearances. This is a very modern way of looking at things. 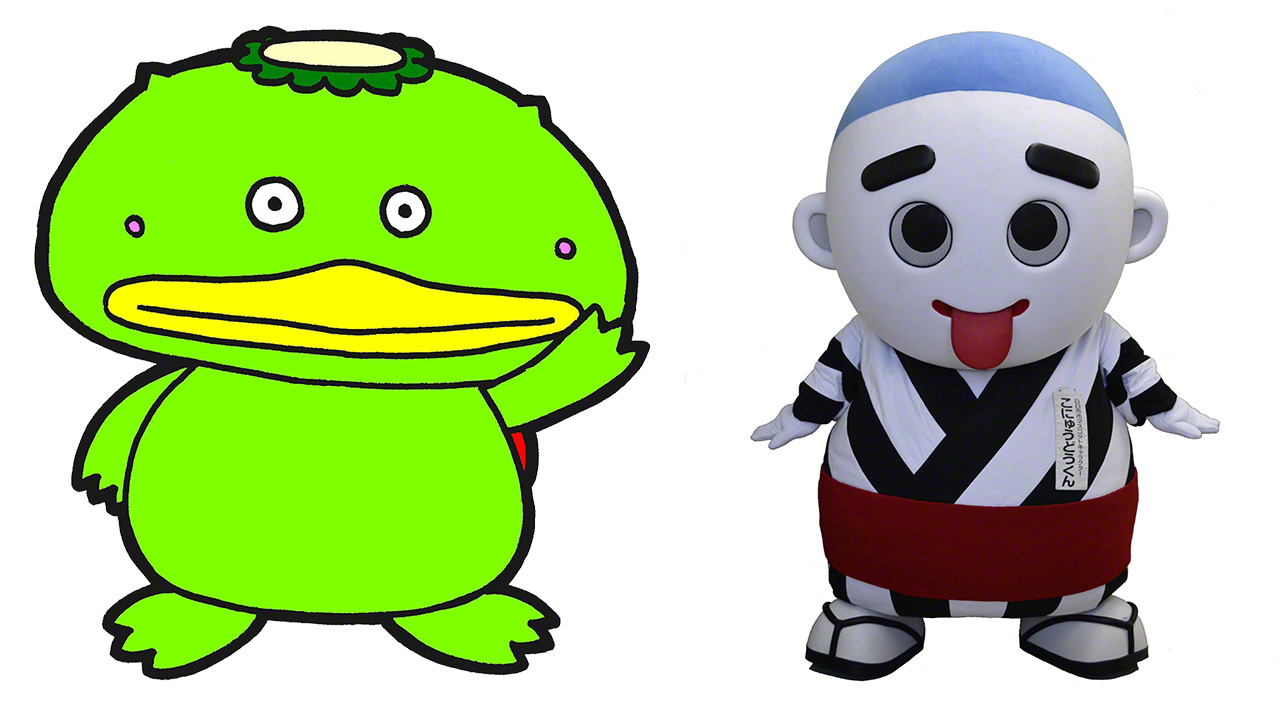