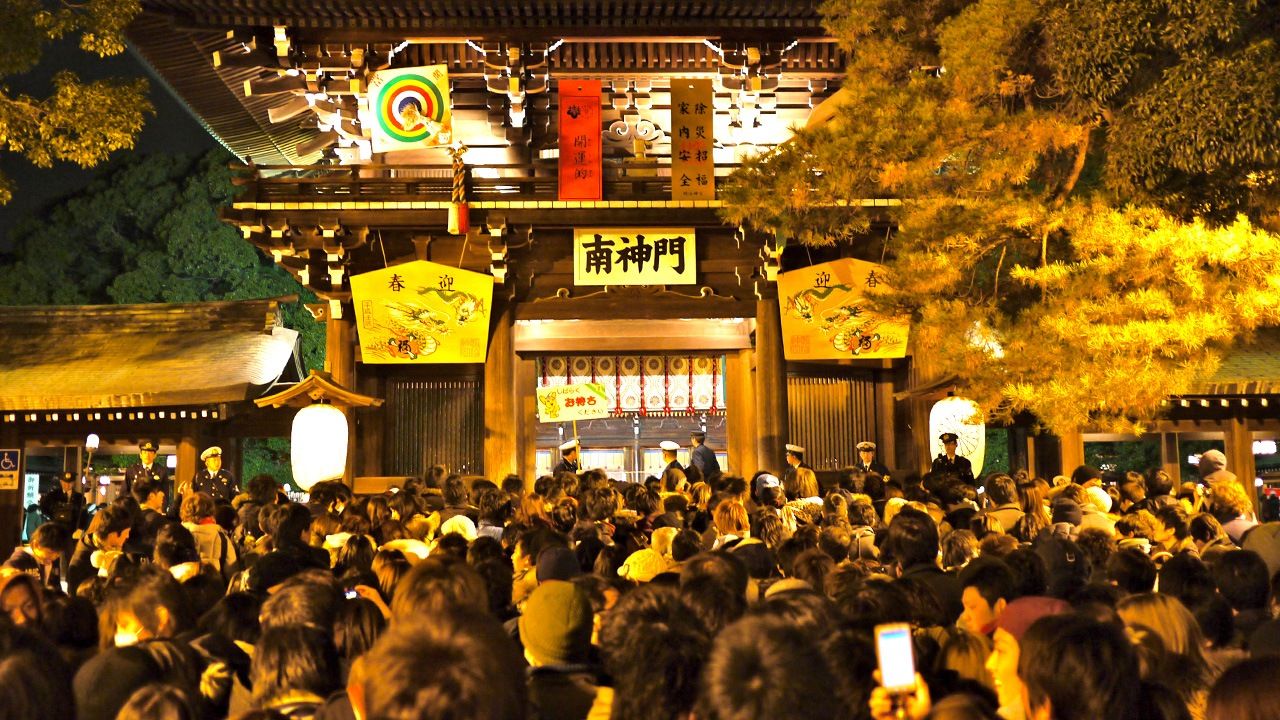 Society Apr 12, 2019
Shintō is conventionally viewed as Japan’s native religion, in place since ancient times. But it is a set of traditions and practices that have seen great change over the years, and it continues to evolve as a part of people’s lives.

A Visit to the Birthplace of “Official Shintō”

On the night of February 2 this year, some friends and I met up at the southern end of Kyoto University’s main campus. We joined throngs of people streaming east toward Yoshida Shrine, which is actually a multishrine complex located on a small hill in east-central Kyoto. Progress down the street was slow. I munched on a sausage. My wife nibbled on some stewed veggies served in a paper tray. Several of us drank overpriced canned beers. As we shuffled toward the torii gate that demarcates the entrance to the shrine, we passed colorful stalls filled with games, more greasy food, and toys. Cute hats with movable bunny ears were apparently all the rage.

There is a widespread misconception that Japanese people grow solemn as they pass through the torii. But most people around us were chatting, joking, and gossiping as they neared the giant vermilion gate. Uniformed security personnel used ropes and batons to control pedestrian traffic, letting only about 20 people into the shrine precincts at a time. Some poor guard had the unenviable job of hoarsely shouting directions over and over again through a megaphone.

Entering the shrine precincts proper, we stopped at counters staffed by businesslike shrine personnel so we could size up the various amulets and talismans on offer. I briefly deliberated with my spouse before buying a nicely packaged set promising household safety (one talisman) and good luck (another). You know, just in case.

Yoshida Shrine has special significance in the history of Shintō. With our purchases complete, we walked up to the Daigengū (Shrine of the Great Origin), an unusual octagonal thatched structure that is only open to the public for about three hours each month. Surrounding the Daigengū are dozens of tiny shrines dedicated to the deities (kami) of each of Japan’s traditional provinces. The idea is that one can conveniently worship all of the deities of Japan in one place.

This remarkable edifice was the brainchild of Yoshida Kanetomo, a fifteenth-century innovator who somehow convinced the political elites of his day to give him exclusive control over issuing licenses to priests serving “native” (i.e., non-Buddhist) deities known as kami. Until that point, there was virtually no understanding of Shintō as a standalone worship tradition separate from Buddhism. (Buddhism had entered Japan via Korea in the sixth century.) By establishing a monopoly on clerical licenses and by treating kami worship as “local” rather than foreign, Yoshida Kanetomo effectively created Shintō as a discrete religion.

So what is Shintō, anyway? 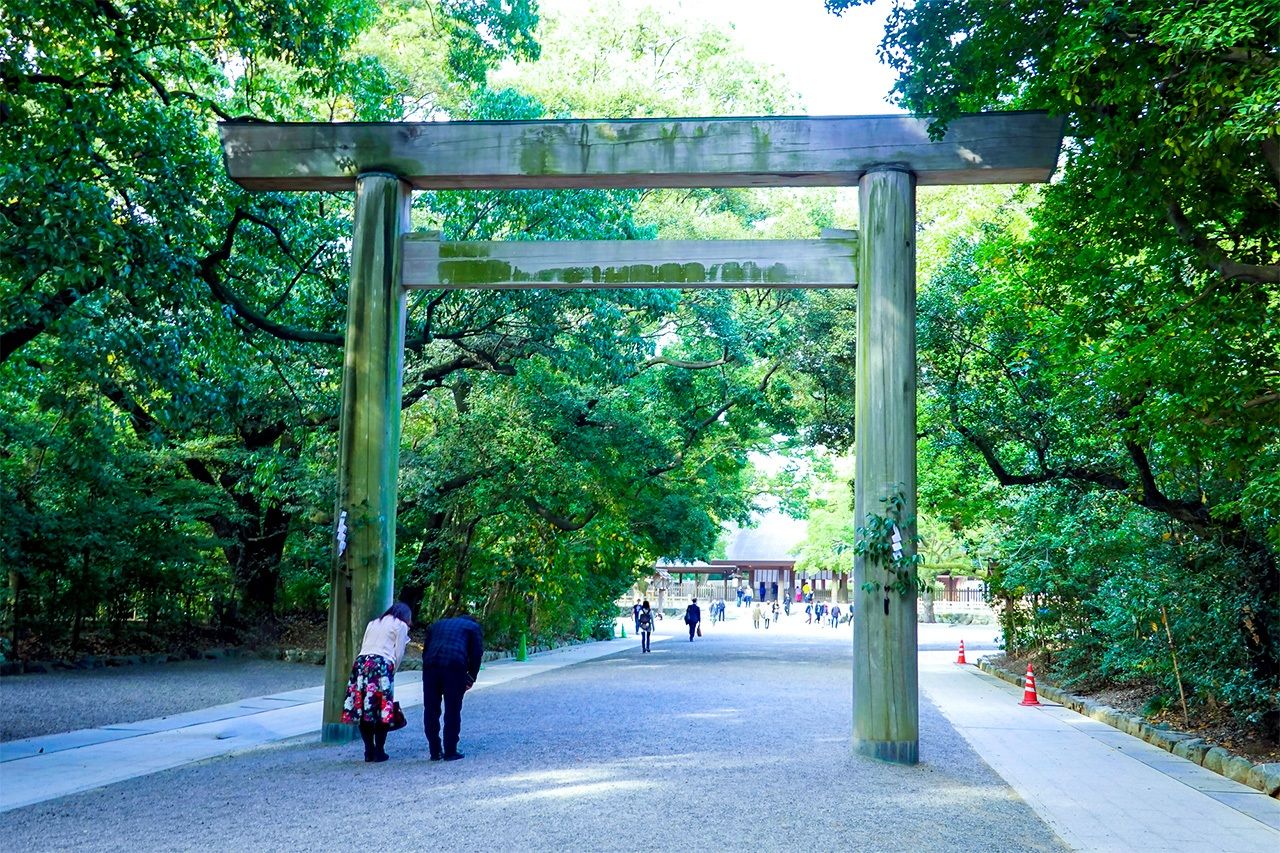 Visitors bow before passing through a torii. (© tenjou/Pixta)

Muddied History for the Simple Shrine

One straightforward way to imagine Shintō is to focus on shrines as sites designated for the veneration of kami. (Scholars translate the buildings known as jinja and jingū as shrines; we call Buddhist places of worship temples.) Archaeological evidence suggests that people on the Japanese archipelago have been conducting rituals at set places since the early common era; ancient historical records also confirm that humans interacted with numinous entities known as kami (spirits, including the spirits of some deceased humans), jingi (heavenly and terrestrial deities), or mono (eerie phenomena). But historians disagree about whether early textual references to jingi worship, for example, can be directly tied to the Shintō of today.

What we do know is that many of the kami now venerated throughout Japan were originally the deified ancestors of kinship groups, including politically powerful immigrant clans from the Korean peninsula. Japan’s imperial chronicles (first compiled in the early eighth century) document tensions between the ruling Yamato court (understood as “local”) and other kinship lineages (variously figured as “local” or “foreign”). From the perspective of the court, many deities—even the putative imperial ancestor, the sun deity Amaterasu—were dangerous entities that needed to be appeased lest their wrath bring about famine or pestilence. In ancient Japan, the basic idea was to keep the deities happy just in case they were inclined to do something terrible.

Popular accounts often portray Shintō as a religion present in Japan since time immemorial, but most ancient “Shintō” shrines existed as part of large ritual complexes that were managed by Buddhist priestly lineages and understood in predominantly Buddhist terms. While some shrines like Nara’s Kasuga Taisha are indeed very old, others that give the impression of hoary antiquity are actually quite modern. Tokyo’s Meiji Jingū, for example, is a popular tourist site that was built to deify Emperor Meiji after his 1912 death. That shrine was only completed in 1920, and its grounds reflect urban planning theories on the leisure needs of modern city dwellers as much as they reflect classical theories about the layout of Shintō sacred forests (chinju no mori). Indeed, shrines have historically been places for spectacle as much as somber veneration. For example, Kyoto-area businessmen who wanted to boost local tourism sponsored the construction of Heian Shrine in 1895, and Yasukuni Shrine in Tokyo featured as a site for carnivalesque entertainment long before it became the solemn war memorial it is today.

So, what do people actually do at shrines? The visit to Yoshida Shrine I described above is what a major shrine is like on a festival day: throngs of people, commercial stalls lining the approach to the shrine, and lots of food and drink. Many festivals involve raucous, alcohol-fueled parades in which locals carry the main deity around the shrine parish in a small portable shrine (mikoshi), stopping at a few set places (otabisho) on the route before returning the deity to the shrine. Regional variations on this protocol abound. Some include performances of sacred dance (kagura). In others, community members drag heavy wheeled floats (dashi) through the streets.

Putting on a festival requires significant buy-in from the local community. Shrines in depopulating rural areas struggle to keep festival traditions alive, and even urban shrines sometimes have to recruit nearby office workers to conduct the labor-intensive preparations a festival requires. Whether urban or rural, most shrines have a group of prominent community members (almost always men), called sōdai, who serve as the shrine’s board of directors and take the lead in organizing and funding shrine events. Donors receive recognition in the form of lanterns and placards emblazoned with their names, so festivals also serve as advertising opportunities for local businesses. Intriguingly, corporate sponsorship contributes to the dissemination of Shintō rites overseas. In February 2019, for example, a Japanese shipbuilding company held a Shintō-style keel-laying ceremony at its factory in a suburb of Shanghai.

On nonfestival days, small shrines tend to be quiet sanctuaries that are only visited by locals. Ritual services shrine priests perform for local parishioners include oharae purifications to eradicate malign influences, rites of passage for young children, and jichinsai rituals that purify land before new construction. By contrast, major shrines like Fushimi Inari (Kyoto) attract throngs of tourists on any given day; many also serve as lavish wedding destinations. These large shrines are also popular places to visit in the first few days of the new year, a practice called hatsumōde. For example, Tokyo’s Meiji Jingū can easily see upwards of 3 million visitors during this short period, and the adjacent Harajuku train station has a special platform to accommodate the unusually high flow of visitors. Interestingly, the hatsumōde tradition resulted from train corporations’ advertising campaigns in the late nineteenth and early twentieth centuries, when rail operators promoted the idea of New Year shrine visits as a way to boost sales.

In a relatively recent trend, people who are not trained as Shintō priests have designated specific shrines as “power spots,” or places where people can tap into mysterious energies. Some shrines have also become tourism destinations for anime fans who want to visit the real-world shrines that serve as models for the illustrated shrines in beloved films. Shrine priests may capitalize on these trends by working unofficial narratives about power spots and anime into their festivals or the votive tablets (ema) they sell; others may try to channel visitors’ unorthodox practices toward “official” rites, with varying degrees of frustration and success.

The Practice of Prayer

Because Shintō appears essentially “Japanese,” one might assume that Japanese people intuitively know how to conduct themselves at shrines. But it is telling that many shrines display Japanese-language instructions on the “proper” protocol for venerating the kami (two bows, two claps, hold hands together while making a petition, another deep bow). Shrine priests also hang posters instructing people to bow toward the kami each time they pass through a torii gate. These initiatives suggest that Shintō priests are continually teaching Japanese people how to properly practice their own “Japanese” tradition.

Indeed, practice is a good way to understand the place of Shintō in contemporary Japanese life. For many people today, shrines are places for interacting with deities, whether casually or with great enthusiasm. Whether or not they believe the enshrined kami really exist is immaterial, because people talk as if the kami exist when they purchase traffic safety amulets or when they jostle a portable shrine around the neighborhood. They practice Shintō. You know, just in case.