Your Virtual Guide to the Shintō Shrine

Culture Jun 27, 2016
Every component of a Shintō shrine exists for a reason, and understanding the significance and function of each part is key to a more meaningful shrine experience. In this series of illustrated guides, Shintō priest and writer Toya Manabu introduces the elements of the Shintō shrine in the order in which they appear to you, the visitor, from the distinctive torii gate to the shamusho, the shrine office. 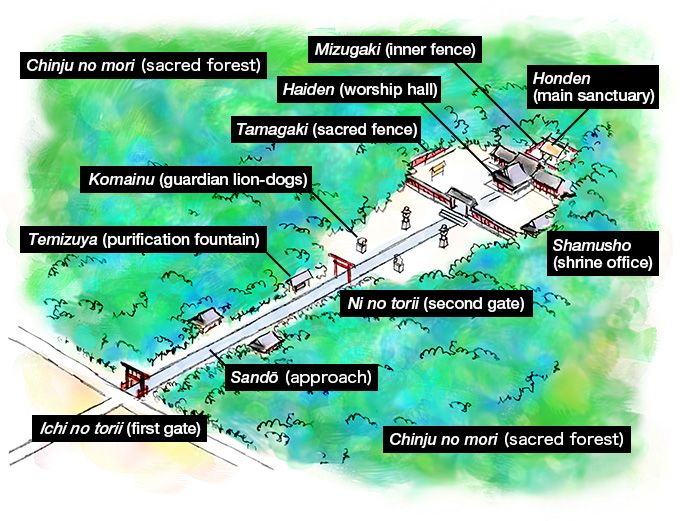 Japan’s indigenous religion, Shintō, has upwards of 100,000 individual shrines, large and small, the oldest of which date back more than 2,000 years. Shintō is a polytheistic religion embracing myriad gods, or kami, and most shrines are dedicated to a deity or deities with special connections to that particular locale. At the heart of a typical shrine is the main sanctuary, called the honden, which houses the shintai, a sacred object in which the kami resides. Disposed around this sacred core are a number of other distinctive structures, such as torii gates and a haiden (worship hall), each with its own meaning and attributes. Join me on a virtual pilgrimage for an insider’s view of the Shintō shrine and its component parts. 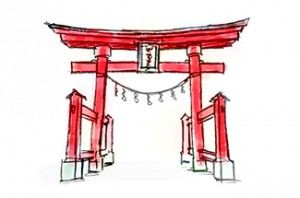 The torii is a gate that stands at the entrance to the sacred area in and around the shrine. The distinctive form of the torii is recognized by people around the world as an icon marking the presence of a Shintō shrine. It is your signal that you are about to enter hallowed space. >>Torii: Gates to the Sacred Spaces 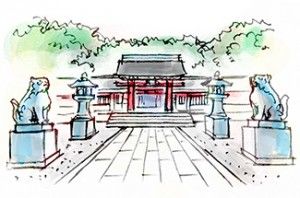 The sandō, or “worshipper’s path,” is a walkway that leads you into the shrine and to its constituent structures. Most sandō are paved with gravel or flagstone. >>Sandō: The Worshipper’s Path 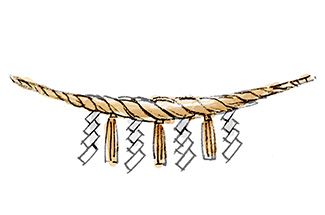 The shimenawa is a special rope tied around or across an object or space to denote its sanctity or purity. >>Shimenawa: The Sacred Rope 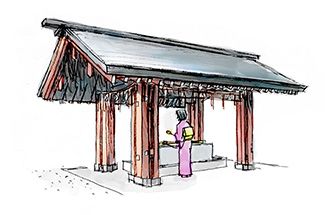 Continuing along the sandō, we come to the temizuya—situated just in front of the last torii gate—where you will find clear, running water. Before proceeding to the haiden, worshippers stop here to wash their hands and rinse their mouths in an act of ritual purification. >>Temizuya: The Cleansing Ritual 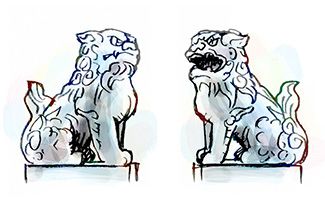 A pair of stone lion-dogs (shishi) often flank the sandō near the entrance to the shrine or the haiden (worship hall). These komainu, as the statues are known, are guardian figures believed to protect the space around the kami from evil. >>Komainu: The Shrine’s Guardian Figures 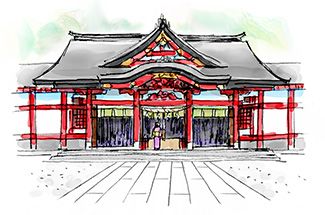 We have reached the haiden, where visitors pray or pay their respects to the kami, or gods of the shrine. The prayers offered up outside the haiden are what we call ryakushiki sanpai, or simplified worship. A more elaborate ritual, referred to as seishiki (formal) sanpai or jōden (in-hall) sanpai, is conducted inside. >>Haiden: The Hall of Worship 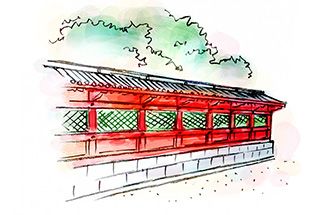 Beyond the haiden lies the honden, where the kami is enshrined. A fence called the tamagaki encloses the honden, setting it off from the profane world outside. >>Tamagaki: Fence Around the Sacred Space 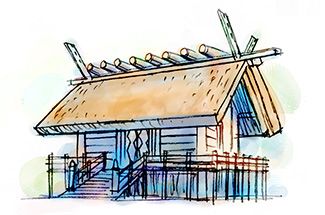 The honden, where the kami is enshrined, is the shrine’s central structure and its most sacred space. Honden architectural styles vary greatly, depending on the shrine’s divine lineage, but all are ultimately traced either to the taisha-zukuri style of Izumo Taisha or to the shinmei-zukuri style found at Ise Grand Shrine. >>Honden: The Main Sanctuary Structure 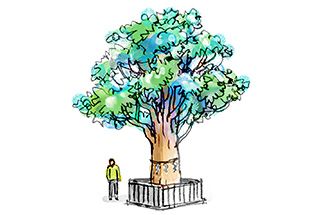 The shintai—literally, the body of the kami—is an object in which the spirit of the kami resides. It is located in the inner sanctum of the honden, called the naijin. (The outer space of the honden, where priests perform their duties, is called the gejin). >>Shintai, Shinboku: The Divine Object or Tree 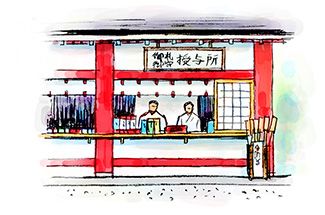 The shamusho is a building inside the compound for the conduct of shrine business other than sacred rites and ceremonies. This is where the priests, priestesses, and other shrine personnel rest when they are not performing their sacred duties. It is also where shrines hold lectures and take requests for special prayers or rites. >>Shamusho: The Shrine Office 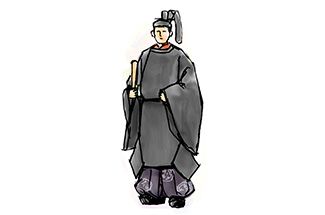 The shōzoku (traditional vestments) worn by Shintō priests are quite distinctive in their design. They reflect a court style that originated in ancient China but evolved in a uniquely Japanese direction during the Heian period (794–1185). >>Shōzoku: The Shinto Vestments