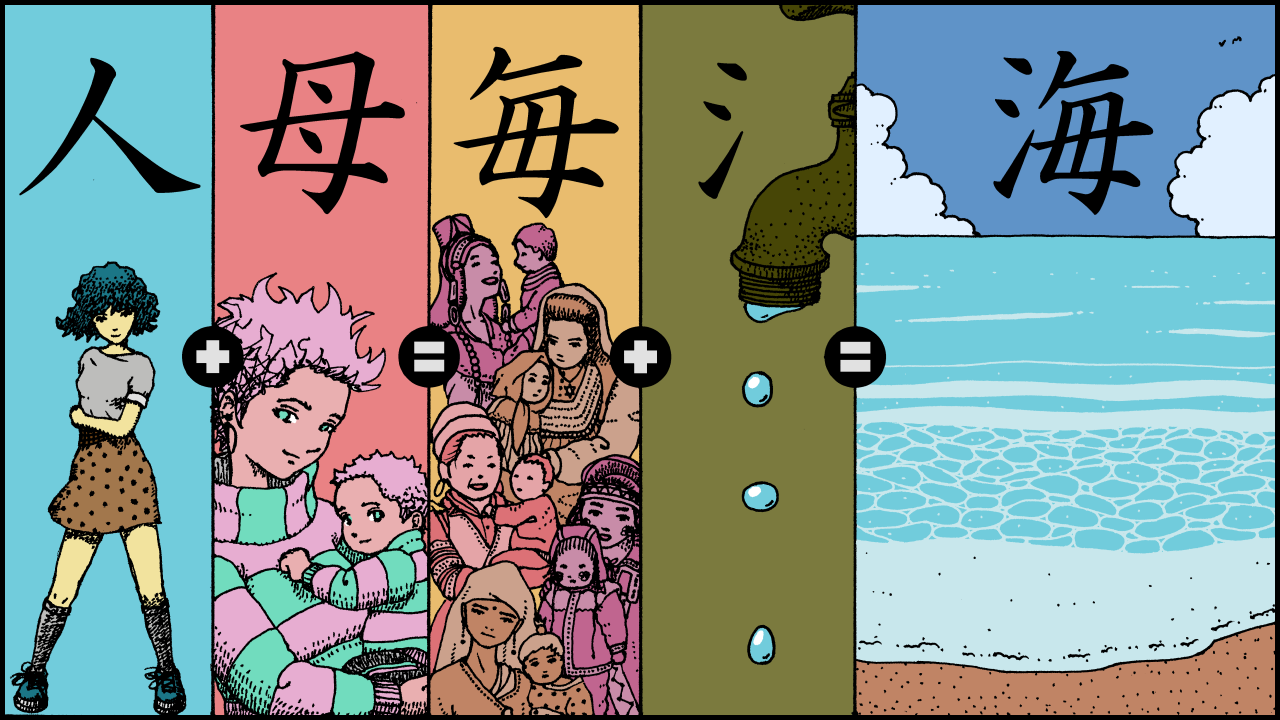 Language Culture Apr 5, 2019
Kanji can appear bewilderingly complex to the learner, but many are made up of a combination of simpler parts. Creating stories based on the meaning of those parts is a useful mnemonic technique.

After mastering hiragana and katakana, Japanese learners move on to kanji. This can be a daunting phase of the learning process, though, with thousands and thousands of characters to absorb. The key, though, is to start with the simple ones—and to realize early on that even the more challenging kanji are often composed of those simple, pictographic parts.

Some kanji are like pictures or straightforward representations of things. Two such characters are 田, which means “field” or “rice paddy,” and 木, meaning “tree.” Most, however, are made up of two or more parts. First-graders in Japan study 田 and 力, the kanji for “strength” (one theory says that 力 shows a bent arm flexing muscles on the right). Putting the two together creates another first-grade kanji: 男, or a “man,” who traditionally used his “strength” farming in the “fields.”

Thus, 男 is a kanji where the parts indicate the overall meaning. Another straightforward example is 明 (bright), which lines up 日 (sun) and 月 (moon), two bright celestial bodies. Knowing what the parts signify can help in memorizing kanji. One needs to recognize their different forms, however. In 休 (rest), 亻 is another way of writing 人 (person); the character 休 (to rest) shows somebody leaning against a tree, taking it easy.

The Child Under the Roof

Japanese children use this method to learn many more kanji, although often the memory tricks are not based on the intentions of the creators. Most characters were devised thousands of years ago in China, and their origins may be obscure, complex, or disputed. It is undeniable, however, that—whether definitely confirmed, possibly true, or wholly invented—a good meaning-based story is an invaluable mnemonic technique for native speakers and foreign students alike.

Here are a few more kanji from the first three grades of elementary school, during which Japanese students learn 440 characters. Putting together 言 (word) and 舌 (tongue) handily creates 話 (talk). Alternatively, combining 言 with 売 (sell) creates 読 (read), so we can think of a bookstore that sells words for people to read. What is a “child” (子) studying under a “roof” (宀)? The answer is 字 (characters).

Forgetting any ideas about authenticity opens up possibilities for the imagination. In 雪 (snow), I can see the character 雨 (rain) above, but picture it as snow falling instead and piling up in lines below. To me, the right-hand part of 説 looks like an old-fashioned television with twin antennae, so my story is that someone “talking” (言) on television is giving a “speech” (説).

It is not always easy to think of a neat story for every kanji. Even without a complete narrative, however, knowing a part is useful for jogging the memory or guessing the whole. In the early stages of learning, one of the most useful parts to know is 氵, which represents “water.” It is found in such related kanji as 海 (sea), 汽 (steam), 池 (pond), 泳 (swim), 湖 (lake), and 港 (harbor).

The character 海, incidentally, combines the water-signifying part on the left with 毎, meaning “each” or “every,” on the right. And this is further divisible into 人 (person) on the top and 母 (mother) below. Thus you can remember that every person has a mother, and just about every drop of water is in the sea.

Using meaning-based stories to memorize kanji has long been a popular technique among foreign learners, influenced by the success of James W. Heisig’s Remembering the Kanji series. It is not necessary to employ a memory trick for every kanji one meets to benefit from the method—although there are students who try—and some stories stick in the mind more easily than others.

If there is no obvious story to begin with, it is worth seeing whether other methods are successful, like repeated reading in context or writing the character out by hand. If they are not, then it can be useful to devise a memory trick. In practice, the problem may be getting two similar kanji confused, in which case it is best to focus on the part that is different.

Learning kanji through the meaning of parts is a great technique, but is most effective when adapted to personal study. Pay attention to the pieces of these tricky characters and see how you can make them simpler!