Getting Started with Kanji

Language Culture Nov 22, 2018
With thousands to learn, kanji can intimidate a newcomer to the Japanese language. But you can discover the appeal of kanji by learning a few basic examples.

Why start learning kanji? It can be fun and intellectually stimulating to learn a system of writing where symbols represent meaning instead of sound alone. For example, a single horizontal line (一) is the kanji for “one.” The kanji for “two” is two lines (二) and the kanji for “three” is three lines (三). True, there are a lot of characters to learn in Japanese—children pick up more than a thousand characters in the six years of elementary school—but it is almost effortless to get started.

As the hiragana and katakana scripts represent sound, they are a familiar concept to people from many linguistic backgrounds. But kanji offer a fresh perspective. As each stands for a different meaning, there are potentially many to study. But the most common characters are readily encountered and will stand out like friendly faces, offering guidance to meaning in the texts you encounter. Getting a few under one’s belt brings greater understanding of the Japanese language as a whole. Whether to target a certain number of kanji to memorize or not is up to the individual learner.

Japanese children begin by learning 80 kanji in first grade. Foreign learners may study them in a different order, although there is no standard, particularly since the Japanese Language Proficiency Test stopped publishing official lists in 2010. Among the easiest kanji to remember are those that resemble the words they represent. These range from basic characters composed of a few lines like 木 (tree) and 山 (mountain) to more complex ones like 鳥 (bird).

Japanese kanji are descended from Chinese characters. The earliest characters still in existence were scratched on shells and bones as part of divination rites in ancient China. Many were actually more like detailed pictures. When they became used in everyday writing, the characters evolved into simplified forms to make them easier to reproduce. Japan adopted Chinese characters as it had no writing system then, although it later developed the native scripts hiragana and katakana based on them. 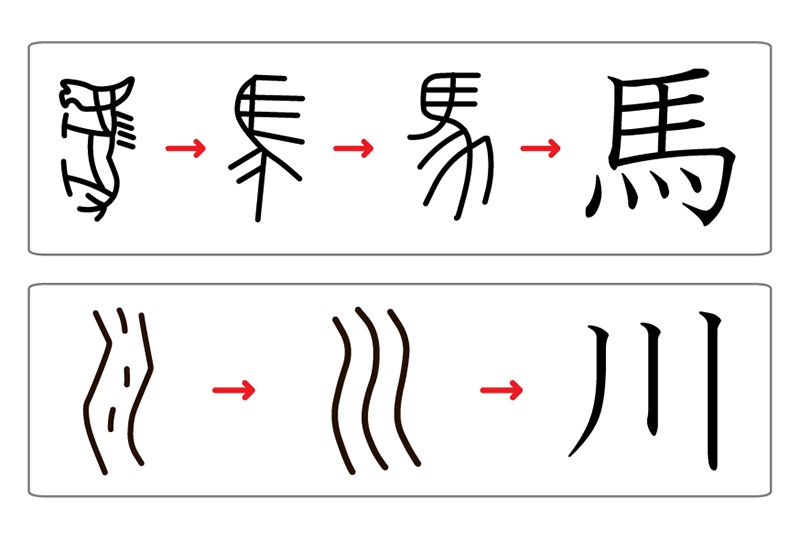 The simplification over time of the kanji 馬 (horse) and 川 (river).

Sometimes it is easy to see the picture, as with 門 (gate) or 木 (tree), which can also multiply into 林 (woods) and 森 (forest). At other times, an imaginative leap is required, such as for 川 (river), where the middle line represents the flowing water between two banks, and 馬 (horse), where it is necessary to see the dots as legs, and the upper lines to the right as representing the mane.

There is no need, however, to follow the originally intended interpretation. A simple memory trick is to use your own ideas. For example, the character 雨 (rain) shows raindrops falling from a cloud. To me it looks more like raindrops seen through a window, so this is the image that goes through my mind. Similarly, since someone suggested to me that 上 (up) resembles a cat climbing up a tree, I cannot see it any other way. (In fact, it was originally simply one horizontal line above another; the vertical line was added later). Another one is to see the character 中 (center) as a table tennis table, with the central line representing the net.

Toes in the Water

The chart below shows some simple, commonly used kanji, accompanied by pictures to aid the memory process. The meaning of each character and its pronunciation are also given. Many can be pronounced in different ways, but only the most common pronunciation appears in the chart.

Most kanji are created by combining two or more elements, which makes it possible to express abstract concepts that cannot be conveyed through pictures alone. Yet the characters that look like things are a great place for beginners to dip their toes in the water. As with any aspect of language learning, it is not all or nothing and any kanji knowledge gained should be considered an achievement and a platform for further study. 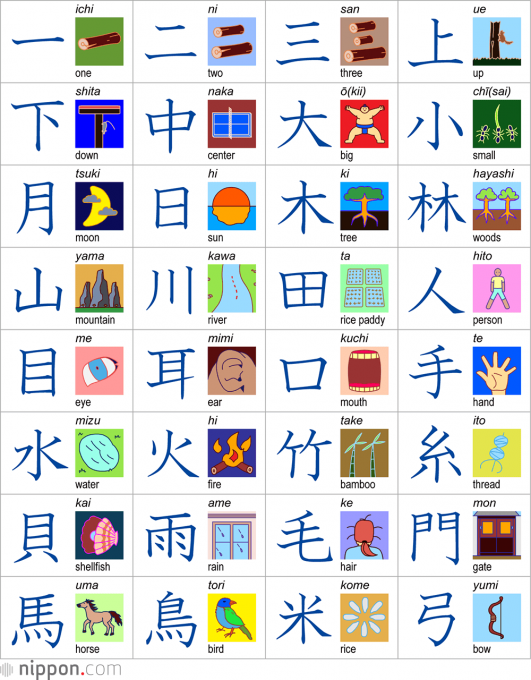