During their six years in elementary school, Japanese children learn over 1,000 kanji. In this time, they greatly increase their reading sophistication, moving from picture books to short novels and simple biographies. Characters are all around them and often graded to their level, whether they are taking lessons in social studies or other subjects, practicing calligraphy, or even reading manga and playing video games in their free time.

When they actually sit down to formally study kanji in kokugo (Japanese language) classes, there is more than just rote learning involved, as a look at a textbook—in this case a kanji drill book for third-graders published by Bunkei—will demonstrate. As well as the basics of the meaning, stroke order, and different readings for each kanji, there are colorful pictures appealing to children and easy-to-understand practice sentences. There are also various tips and tricks for fixing the kanji in their memory.

Often there is a short sentence or two highlighting different readings or words that use the kanji. At other times, the book may illustrate the derivation of the structure through resemblance to real things; the character 開, meaning “open,” looks like two hands holding a gate to open it. There are also stories connecting the different parts of the kanji, such as that words spoken (言) in a temple (寺) are poetry (詩). 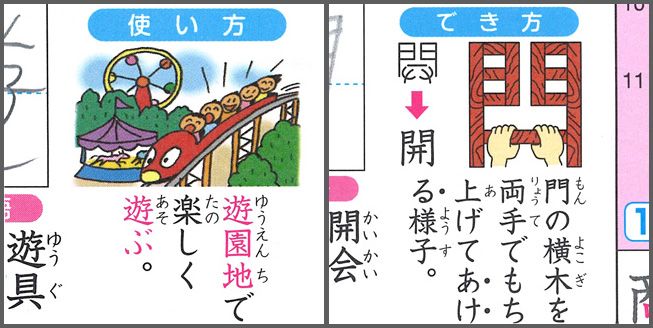 (Left) Children enjoying themselves (遊ぶ; asobu) at the amusement park (遊園地; yūenchi); the sentence highlights the different readings for 遊. (Right) The character 開 looks like two hands holding a gate to open it.

Pictures and sentences may indicate the differences between words that are pronounced the same, but written with different kanji. For example, 上る and 登る are both pronounced noboru and can be used to describe going up a hill, but while the first has a more general meaning, the second is only for climbing through physical effort. There are some simple quizzes and puzzles too, which put the emphasis on having fun with kanji.

It is certainly true that the ability to write kanji is reinforced by a great deal of repetition, but other techniques play an important role at the initial encounter. Even as the characters get more complex in junior high and high school, there are popular tricks for remembering how to write them. The role of reading should not be ignored, either: repeatedly seeing kanji in meaningful contexts helps them to stick in the mind, which is why schools generally set scheduled reading times throughout the week.

Potential Benefits of Writing by Hand

Given the option, some foreign students learning Japanese may choose not to spend time learning how to write kanji by hand. This is a reasonable decision in an age of computers and smartphones, when very little communication is done on paper. Prioritizing other aspects of Japanese could be wise in the early stages of learning in particular. Even so, handwriting is a skill that offers a variety of potential benefits.

First, the repeated action of writing can help cement the knowledge more firmly than reading alone. Writing also forces students to focus on the shape of a character, emphasizing the difference between similar kanji that are easily confused, such as 千 (1,000) and 干 (dried) or 微 (minute) and 徴 (sign). Both of these factors can make characters more readily recognizable the next time they are encountered in reading.

Copying example sentences can also be beneficial as a form of reading practice. It is all too easy to skim over sentences when simply reading. Actually getting involved through writing means slowing down, encouraging more careful attention to the content. This instills knowledge of natural Japanese and the wider patterns of how words fit together.

The textbooks used in schools are distributed free of charge to children and are not available for sale. There are, however, many other materials for learning kanji in Japanese bookshops or online, including the popular series of preparation books for the Kanji Kentei certification, although these can be difficult to find outside Japan. Some free Internet resources also provide simple worksheets that support basic kanji practice.

The best of these is Chibimusu Doriru, which even Japanese beginners will find relatively easy to navigate. To find kanji worksheets at different levels, click the various options listed in the kokugo (国語) section. More adventurous souls can try the quizzes for elementary school students or explore the idioms, proverbs, or four-character phrases a little further down. 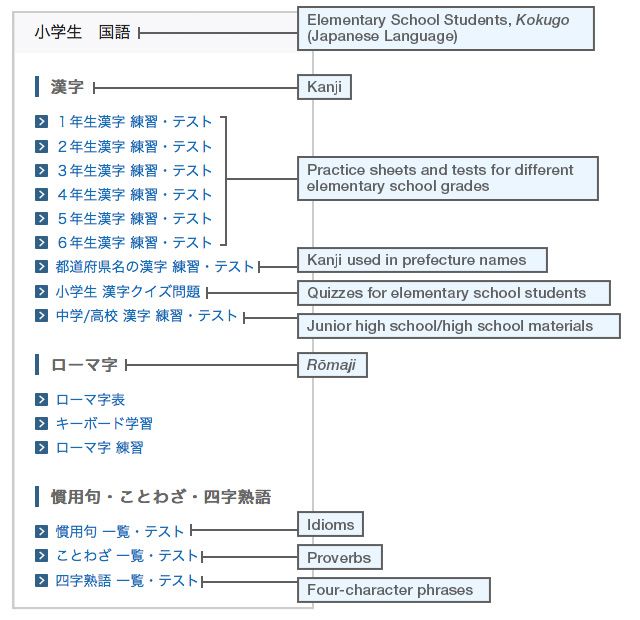 Navigate around the Chibimusu Doriru site using the sidebar on the left.

(Banner photo: Writing out columns of characters by hand remains a common—and uncommonly effective—way to memorize them.)