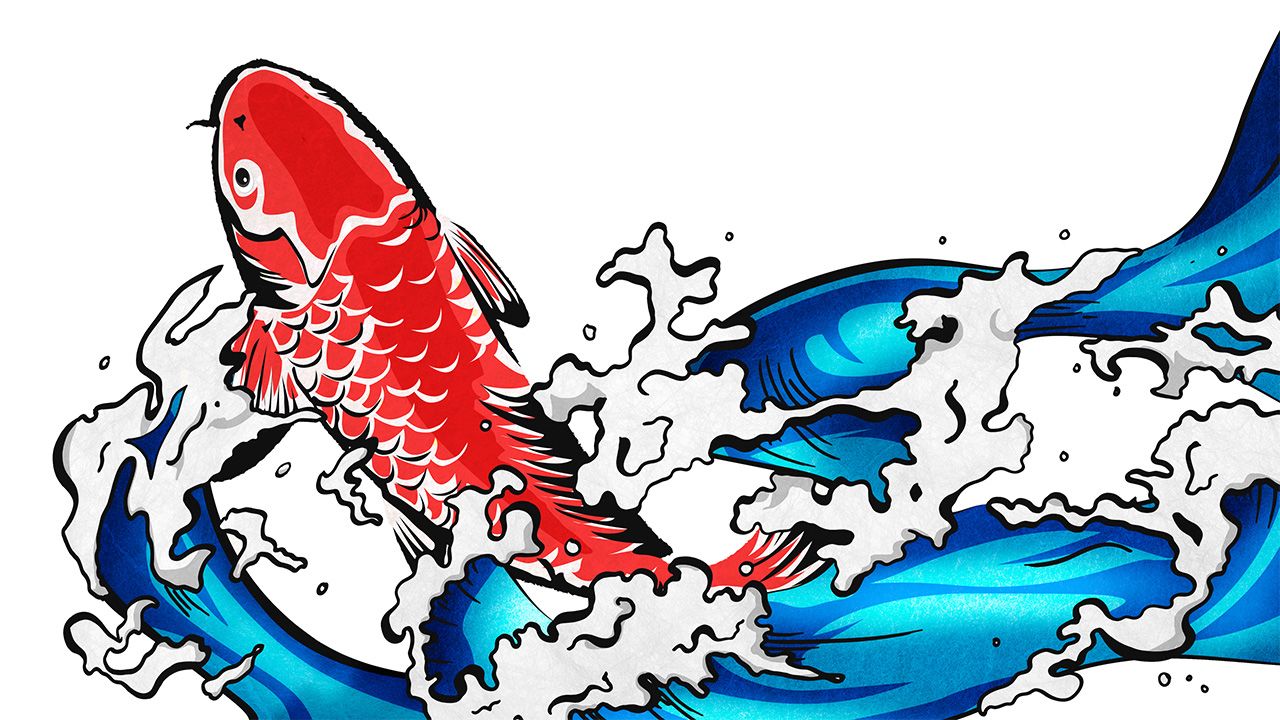 The Carp that Could: Japanese Proverbs About Success

Language Culture May 31, 2022
A selection of Japanese proverbs about success, whether achieved through one’s own efforts or good fortune.

Each May in Japan, carp go prominently on display in the form of colorful windsocks to celebrate the historic festival of tango no sekku (Boys’ Day). The fish are considered a symbol of success due to an old Chinese legend about a persistent carp that becomes a dragon.

This story is also the subject of popular proverbs. Meanwhile other sayings suggest that fishermen can also win out, whether through canny use of resources or taking advantage of others’ quarrels.

鯉の滝登り — Koi no takinobori. In Chinese legend, a “carp that climbs the falls” at the Dragon Gate after swimming upstream in the Yellow River is transformed into a dragon. It is symbolic of worldly success.

登竜門 — Tōryūmon. “Climbing Dragon Gate” is another reference to the same legend. It can describe a specific gateway to success, such as an important examination.

海老で鯛を釣る — Ebi de tai o tsuru. To “use a shrimp to catch a sea bream” means to use a small investment or effort to win a great profit.

漁夫の利 — Gyofu no ri. A sandpiper tried to eat a clam on a beach, but the clam trapped the bird’s beak in its shell. A fisherman came along and caught both together. The “fisherman’s profit” describes a situation where a fight between two parties leads to a third’s effortless profit.

The following three proverbs offer advice on the path to success, while the one that comes after says that those who have reached the top level of attainment can perform under any circumstances.

早起きは三文の徳 — Hayaoki wa san mon no toku. “Wake early and gain three mon” means that early risers benefit to the extent of three mon (the name for a coin once in circulation). It suggests that not sleeping in is the way to get ahead.

芸は身を助く — Gei wa mi o tasuku. “An art can save you.” Learning a particular art or skill is a good backup and might help out or even provide a living one day.

初心忘るべからず — Shoshin wasuru bekarazu. “Do not forget the beginner’s spirit” means that one should always maintain the same humility and serious approach of a beginner, even having become more experienced. It is based on a phrase by Zeami, one of the pioneers of the nō drama.

弘法筆を選ばず — Kōbo fude o erabazu. “Kōbō does not choose his brush.” Kūkai, known posthumously as Kōbō Daishi, is known for spreading Buddhism across Japan in the early ninth century, but is also famous for his calligraphy. This proverb notes that his skill was such that he could produce excellent work with any brush. As a similar saying in English has it, “A good workman never blames his tools.”

Success can also come by chance, although it is important to recognize the opportunity. Meanwhile, one proverb here suggests that unlikeable people get on better in the world than others. In any case, however success is achieved, there is no resting on one’s laurels, as the final saying advises.

棚から牡丹餅 — Tana kara botamochi. A “botamochi from a shelf” describes a tasty botamochi treat (a mochi covered in sweet an paste) falling from a shelf into someone’s mouth, and refers to unexpected fortune.

鴨が葱を背負って来る — Kamo ga negi o shotte kuru. If “a duck comes carrying a negi onion on its back,” this describes a moment of great opportunity. Duck and negi are often eaten together, so this is seen as a particularly fortunate combination. The phrase is often used for an opportunity involving a gullible mark. Another meaning for kamo (duck) is “sucker.”

憎まれっ子世に憚る — Nikumarekko yo ni habakaru. Being a good person is not necessarily a route to success, at least according to this proverb, “Hated children flourish in the world.”

勝って兜の緒を締めよ — Katte kabuto no o o shimeyo. The proverb “After victory, tighten your helmet strings,” advises that one should not let one’s guard down after achieving success.