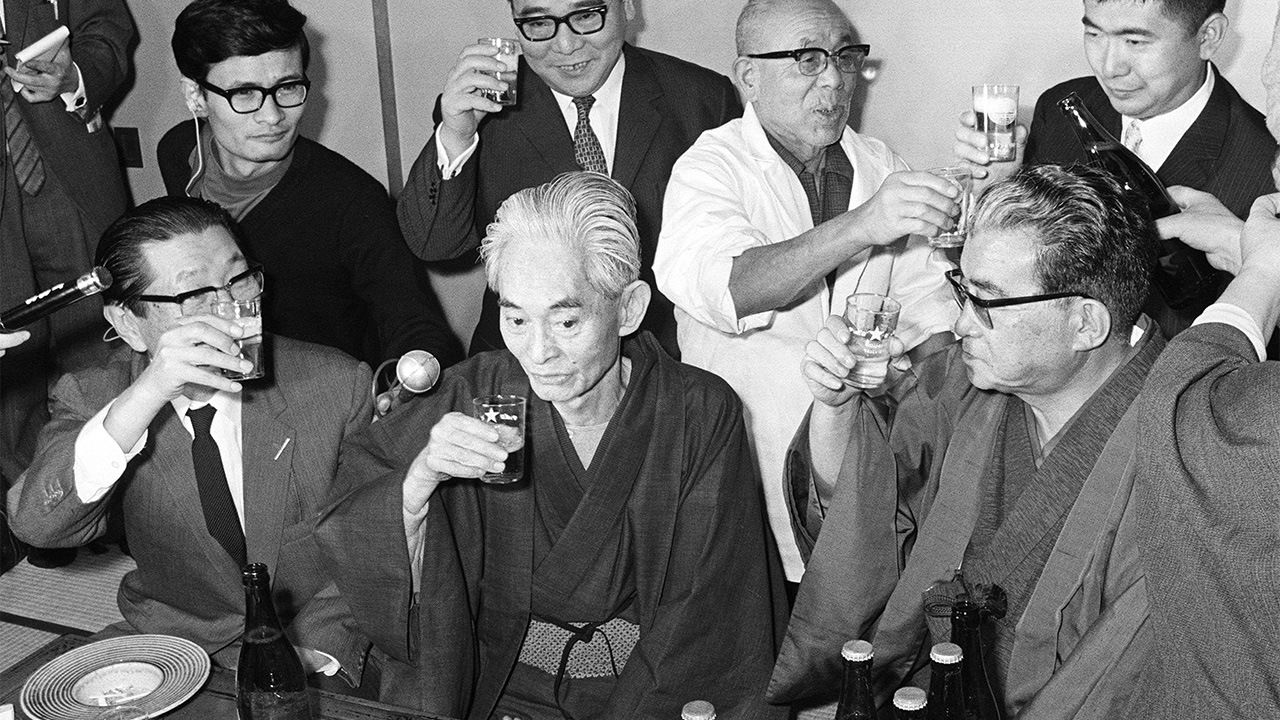 Onto the World Stage: Japanese Literature 1951–89

Books Art Apr 27, 2020
After World War II, Japanese literature began to be known more widely around the world, and Kawabata Yasunari became the country’s first winner of the Nobel Prize in literature in 1968.

The San Francisco Peace Treaty, signed in 1951, brought the postwar US Occupation toward its end, allowing Japan to regain sovereignty the next year. Throughout the remainder of the 1927–89 Shōwa era, rapid growth propelled the country to become the world’s second largest economy. During the same period its literature mounted the world stage via a string of translations, and its major writers came under consideration for the Nobel Prize. Broad trends in this time included a second wave of Western influences and the breaking down of genre boundaries.

Among a triumvirate who won international reputations through translation, Kawabata Yasunari became Japan’s first winner of the Nobel Prize in Literature in 1968. In his postwar masterpiece Yama no oto (trans. The Sound of the Mountain), serialized from 1949 to 1954, the aging patriarch is preoccupied by death, imagining he can hear it in the rumbling of a nearby peak. Official records show that Tanizaki Jun’ichirō was also a strong candidate for the Nobel Prize before his death in 1965.

Mishima Yukio was the third member of this group, and another Nobel candidate. His 1956 Kinkakuji (trans. The Temple of the Golden Pavilion) reimagines the real-life arson of the titular Kyoto temple. The tetralogy Hōjō no umi (trans. The Sea of Fertility), published from 1969 to 1971, depicts Japan through the decades of the twentieth century, centered on four characters united by the same birthmark. In 1970, Mishima made international headlines when he committed ritual suicide by seppuku following the failure of an attempt to win over members of the Self-Defense Forces to his cause.

The avant-garde novels of Abe Kōbō, peopled by characters cut off from society, drew comparisons to the writings of Franz Kafka. In his 1962 Suna no onna (trans. The Woman in the Dunes), a teacher is trapped in a village where he is forced to spend his days shoveling sand. The 1973 Hako otoko (trans. The Box Man) goes to more absurd extremes, with the main character taking on anonymity by wearing a cardboard box.

Based on the author’s own experience, Ōe Kenzaburō’s 1964 Kojinteki na taiken (trans. A Personal Matter) portrays a young father grappling with the responsibility of looking after a son with brain damage. His 1967 classic Man’en gannen no futtobōru (trans. The Silent Cry) is set in a remote Shikoku village where two brothers return to face their own different crises and uncover family secrets.

Other notable writers in the period include Enchi Fumiko, whose Onnazaka (trans. The Waiting Years), published in parts from 1949 to 1957, portrays the disillusionment of a nineteenth-century woman who must hire a series of “maids” to satisfy her husband’s lusts. Endō Shūsaku’s 1966 Chinmoku (trans. Silence) centers on the hardships of a seventeenth-century Jesuit missionary hunted by the authorities. Tsushima Yūko’s 1979 Hikari no ryōbun, which presents a series of episodes in the life of a young single mother, was published in 2019 as Territory of Light in a translation by Geraldine Harcourt.

Historical fiction epics like Saka no ue no kumo (trans. Clouds Above the Hill) about the 1904–05 Russo-Japanese War and the surrounding period of Japanese history propelled Shiba Ryōtarō into the bestseller lists with its 1968–72 serialization. Matsumoto Seichō won fans for his focus on realism in the 1958 Ten to sen (trans. Points and Lines) and other mystery novels. Science fiction writer Komatsu Sakyō’s 1973 blockbuster Nippon chinbotsu (trans. Japan Sinks), which imagined a massive earthquake that submerges the entire country, sold over 4 million copies.

In the 1970s and 1980s, popular new writers blurred the boundaries between literary and genre fiction. Murakami Haruki has been a national celebrity since the success of his 1987 bestseller Noruwei no mori (trans. Norwegian Wood). Murakami Ryū’s 1976 debut, Kagirinaku tōmei ni chikai burū (trans. Almost Transparent Blue), a story of young characters lost in sex, violence, and drugs, set the nihilistic tone for his later work. Yoshimoto Banana’s 1988 novella Kitchin (trans. Kitchen) of a young woman recovering from grief struck a chord with many readers.

Tanikawa Shuntarō established himself as one of Japan’s leading poets in the postwar era. The New Selected Poems translated by William I. Elliott includes essential poems like “Nijūoku kōnen no kodoku” (trans. “Two Billion Light-Years of Solitude”) from his 1952 debut collection of the same name. Tawara Machi drew new attention to the tanka with her contemporary spin on the form in her 1987 collection Sarada kinenbi (trans. Salad Anniversary).

A boy from a poor household, the son of a Buddhist priest, grows up obsessed with the Kyoto temple Kinkakuji. Later he is made an acolyte there and becomes fixated on the idea of its destruction.

Translation: The Temple of the Golden Pavilion by Ivan Morris.

A junior high school teacher on an insect-collecting exhibition near sand dunes stays the night at the house of a villager, a young widow. The next day, the rope ladder he used to climb down to the dwelling has vanished and he is unable to leave.

Translation: The Woman in the Dunes by E. Dale Saunders.

When a young intellectual becomes father to a mentally handicapped boy, he seeks to escape from responsibility into sex and alcohol.

A Portuguese Jesuit priest tries to spread and sustain Christianity in seventeenth-century Japan, when the faith is banned and believers persecuted.

A coming-of-age tale about students in 1960s Tokyo that won the hearts of millions of readers with its meditations on love and loss.

(Originally published in English. Banner photo: Kawabata Yasunari, at center, raises a glass on October 17, 1968, at his Kamakura home to celebrate his winning the Nobel Prize in Literature that year. © Jiji.)