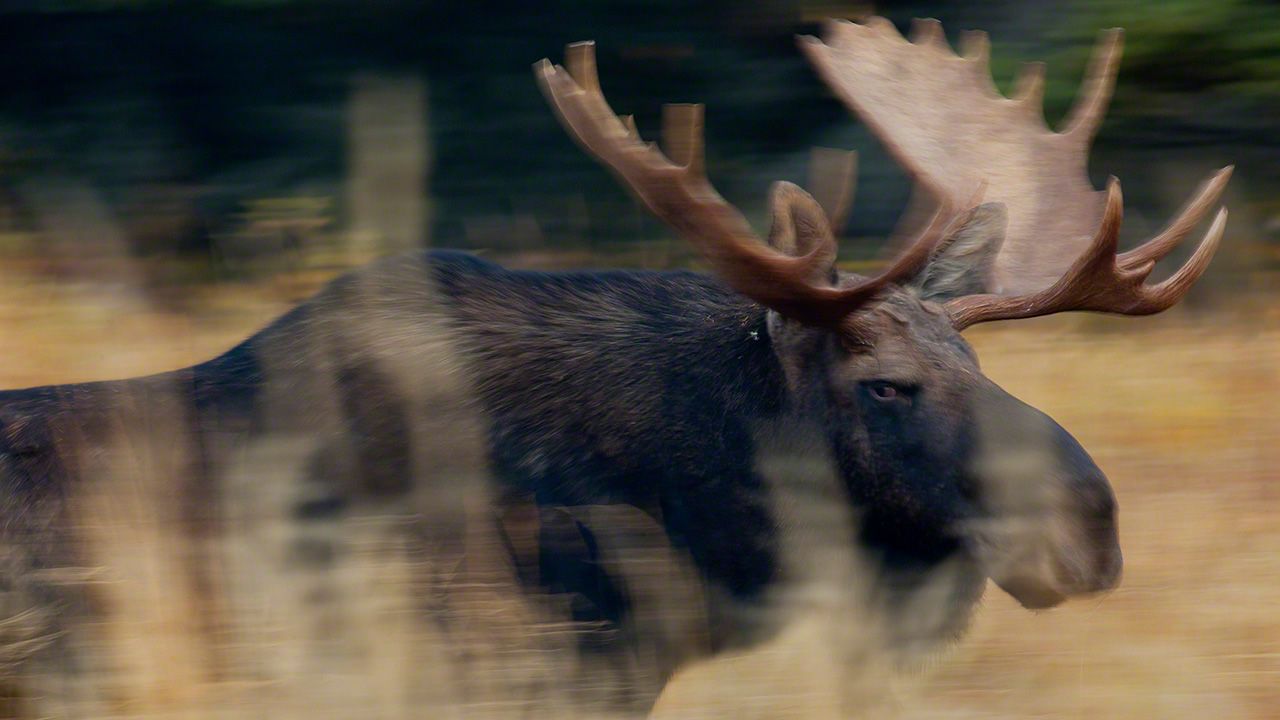 Photographer Ōtake Hidehiro Is Guided by the Blaze

Travel Environment Images Oct 6, 2021
In the fourth part of nature photographer Ōtake Hidehiro’s five-article retrospective, he talks about his stay in Red Lake, a gold-mining town in northwestern Ontario, when a lightning strike sets the forest of his memories aflame.

In 2004, I took a long canoe trip in Ontario’s Woodland Caribou Provincial Park with the passionate canoeist Wayne Lewis. When we finished, we visited the park office at Red Lake to report on the condition of trails and portage areas—places where canoeists have to carry their watercraft and gear overland to the next lake—the water levels of all the rivers and lakes, and other information that might be useful for later canoeists. Wayne, who always heads out first thing in spring and brings back the latest information, is like an ambassador of the woods. 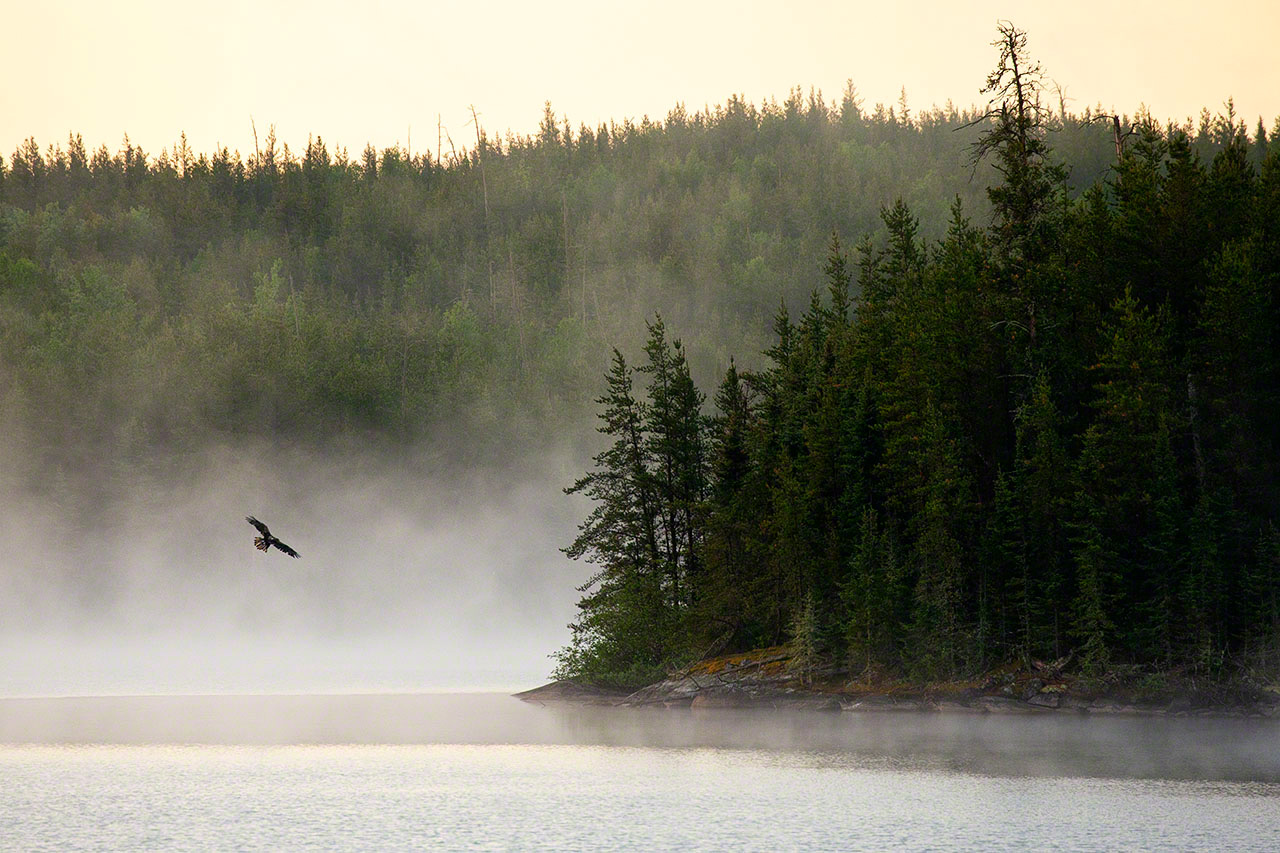 A juvenile bald eagle dancing in the morning lake mists. (2018)

Doug Gilmore, the park superintendent, offered me a warm welcome when we explained I had come all the way from Japan to take pictures of the wilderness. When he learned I was also a fan of nature photographer Jim Brandenburg, just like he was, he went on to say that he would do anything he could to support my work photographing the park.

He invited us to his home that evening, and when we arrived a poster on his living room wall stopped me in my tracks. The picture of a backlit caribou herd jumping into the water was one of the most famous works by Japanese photographer Hoshino Michio, and Doug said it was also one of his favorites. I could hardly believe that there I was, in a tiny town on the edge of nowhere, being confronted with a Hoshino photo. It was my encounter with his work—photographs and writing—in my second year at university that first inspired me to become a photographer. When he learned that, Lewis whispered in my ear, “You found the blaze.”

A blaze is a trail marker that guides canoeists to the next lake on portage trails. Canoeists cut these marks into the side of trees along a trail with an axe, and the fresh wood shines brightly in the dark woods. That poster shined like a beacon, guiding me to my next step on the path.

The following year, I applied for a Canadian working holiday visa, and Doug helped me set up a yearlong stay in Red Lake. 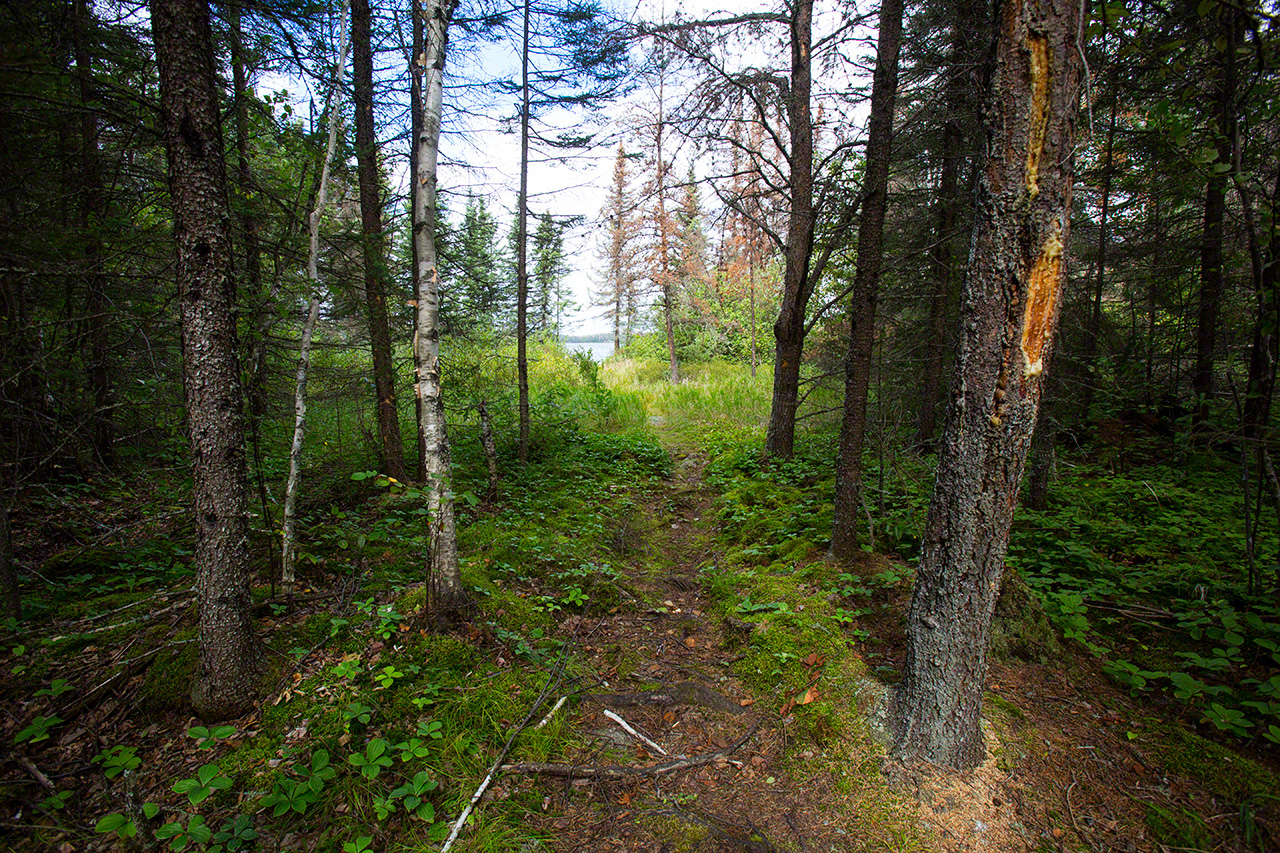 Portage to the next lake. A trail blaze shines from the wood. (2016)

I arrived back in Canada in August 2005. I searched for a place to live, but Red Lake is a gold-mining town with one of the largest deposits in the world. The rent there is almost as high as Tokyo, and none of the available housing was suited for single living. Just when I was at the end of my rope, I befriended the Rogalinskis, a family running an outdoor outfitter in the town. They let me rent an annex they had remodeled into a bunkhouse for canoeists. 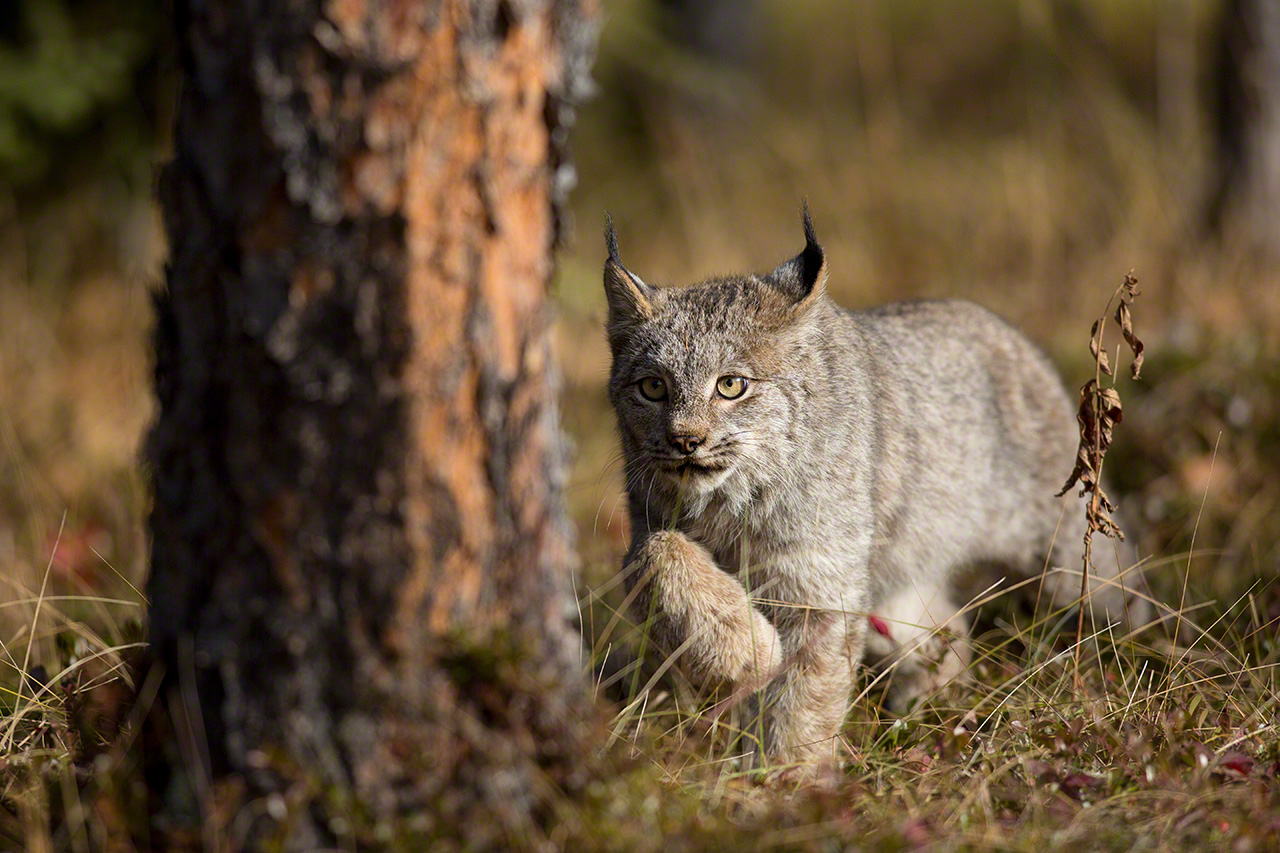 Drawing Closer to the Dream Wolf

My first plan was to set out on a one-month solo camping trip. I borrowed a wall tent and woodstove from my friend Wayne, then bought a food drier to make my own dried rations from fruit, meat, vegetables, and even pasta sauce. I loaded my camping gear and rented canoe into a floatplane and rode it deep into the park. After the pilot landed on the lake and dropped me off, we parted with a promise of a pick-up one month later. 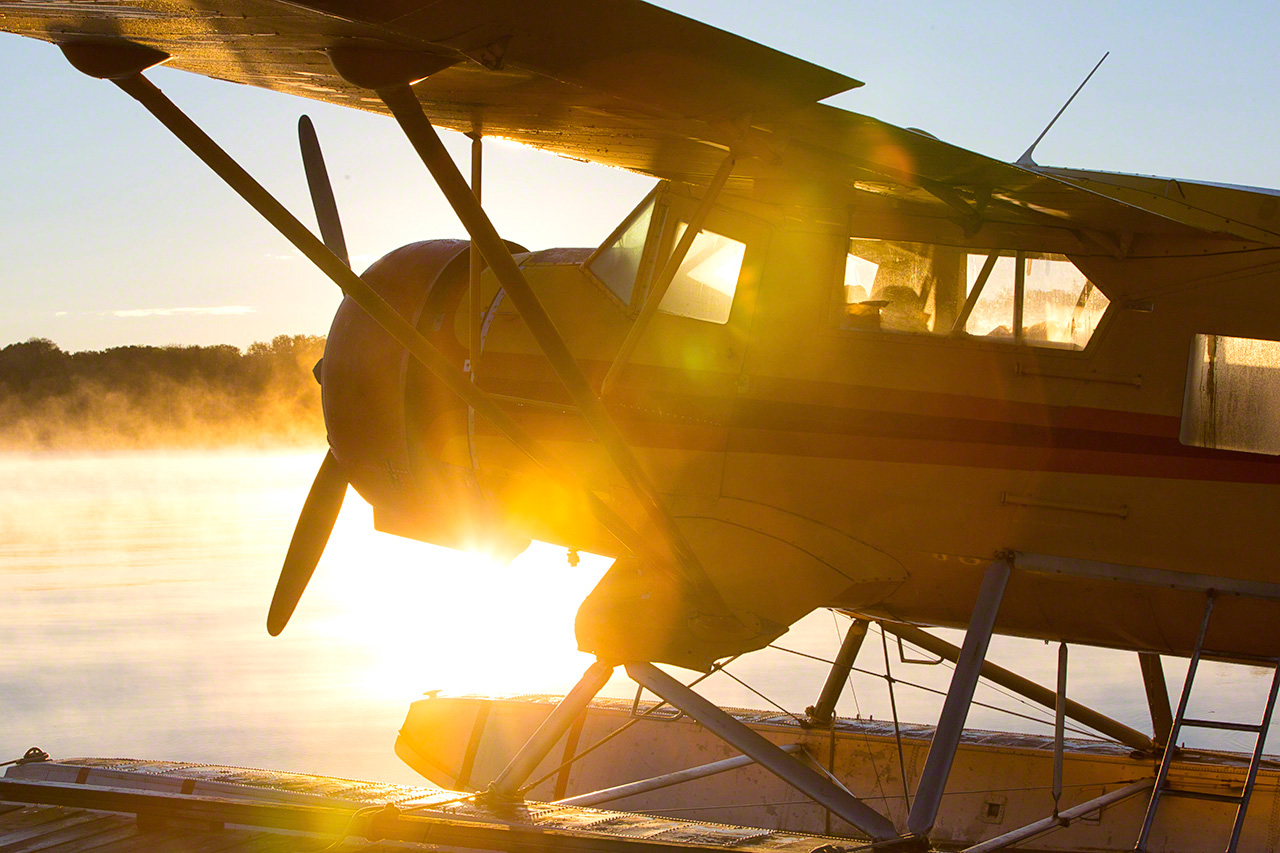 The laketop floatplane, a common way to get around the Northwoods. A plane like this helped me get my canoe and camping gear deep into the woods. (2016)

I set up a base camp, cut some firewood, and wandered the woods every day with a map and compass. On one walk, I climbed to the top of a gentle slope. When I carefully poked my head above the peak, I heard a barking sound. Looking down into the valley below, I saw a huge black wolf vanish into the trees. I had had no time to even raise my camera to my eye. I wondered how it had noticed me, high above it as I was. Its senses must have been unbelievably sharp. 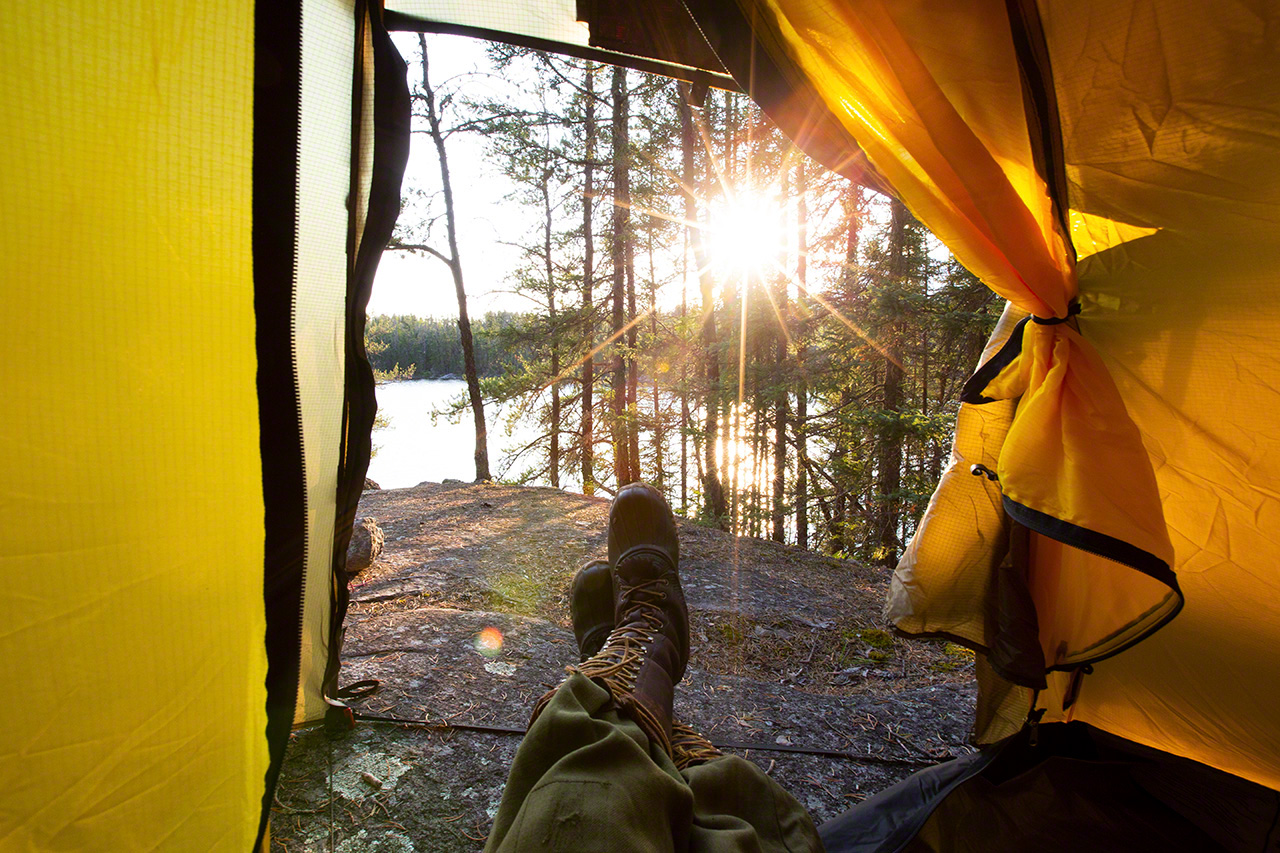 When the new year came, I set out on a winter trip with Wayne. We would not be canoeing, since the lakes were still frozen, so we loaded our gear on a toboggan, another Northwoods tradition, and pulled it ourselves. We wore snowshoes to keep from sinking into the soft snow.

At one point on that trip, when I was fetching water from below the lake ice in the bitter cold, then well below –20° Celsius, I saw a black dot far in the distance. A wolf. It had apparently come to check out an ice fishing hole we had made a day before. I did not miss my chance that time. It was no more than a speck in the viewfinder, but I was finally able to capture a wolf in the wild on film. I felt, at last, that I was making some progress toward my true goal. 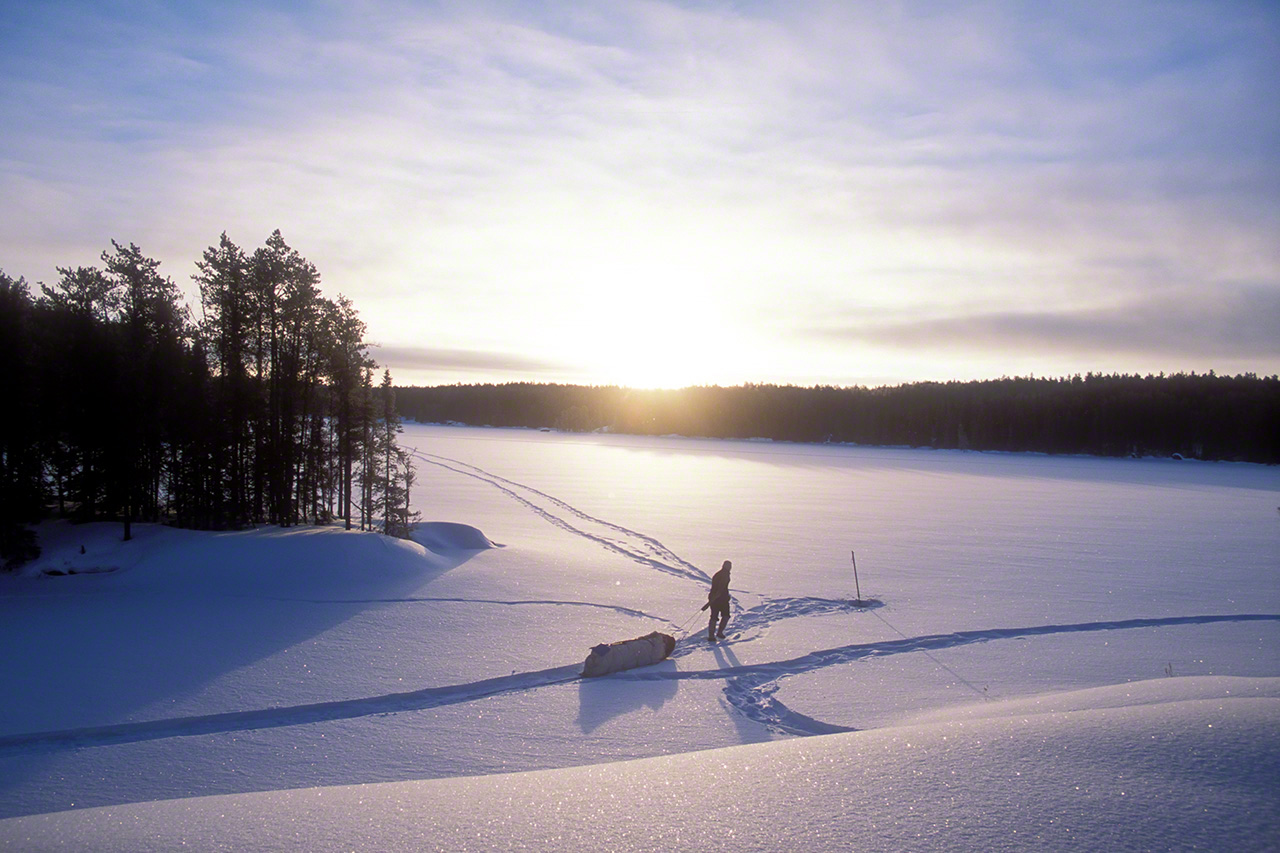 My Forest of Memories, Ablaze

In the summer of 2006, a major fire broke out inside the park. It was sparked by lightning, and the strong winds quickly whipped it into a roaring blaze. It was the forty-fourth wildfire in the Red Lake district that year. The Northwoods, where the soil is thin and dries out quickly without rain, is said to see around 100 fires a year in that region alone. The area burned in that fire included the woodlands I had explored with Wayne Lewis.

What does it mean when a forest burns? The forest of my memories was lost, but I knew I had to see the remains with my own eyes and make a record of them. I asked the fire department to fly me by helicopter to almost the center of the burned area. When I got there, I found the beautiful forest, which had so reminded me of a Japanese garden, was burned to the ground. Only charred earth remained. 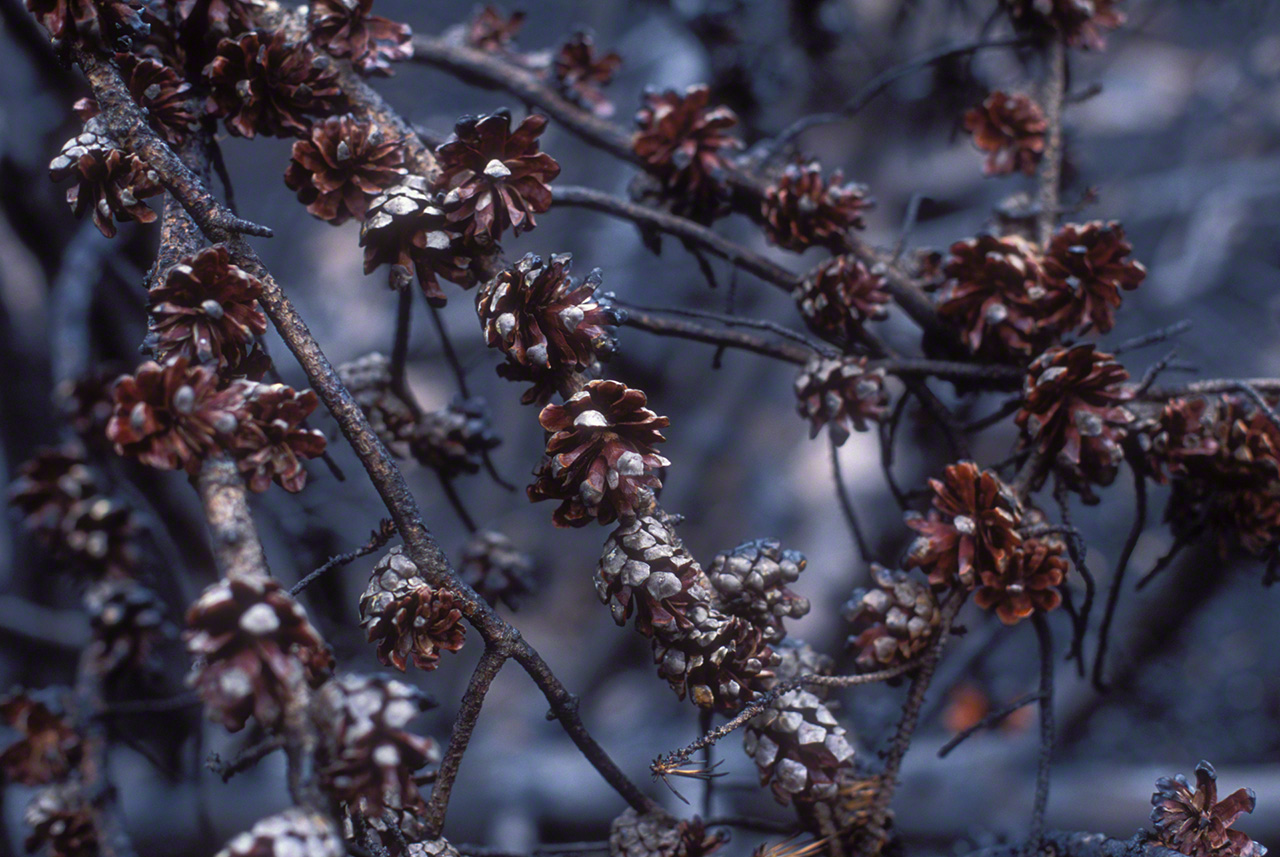 Look as I might, I saw no trace of green—no moss, no undergrowth. Only the Canadian shield, a seam of bedrock formed about two billion years ago, spread as far as I could see. It had gotten so hot, even the rock was peeling off like thin skin. The blackened trees were bare, but the cones of the jack pine trees, a mainstay of the forest ecosystem there, were all open. In normal times, they are coated with a resin, so they can only open to drop their seeds when heated by flame. In other words, jack pines can propagate when the forest burns.

When we canoed through in the spring, the floor of the deep forest had been covered in mosses and lichens. It was an important wintering ground for caribou, who feed on reindeer moss. I suppose that when the highest trees burn, more sunlight can fall on lower levels, allowing the undergrowth to return quickly. That would help attract Canadian geese and other waterfowl. In five years, blueberries would again have fruit, and they would in turn bring bears. In a decade, the trees would once more be tightly packed, creating a habitat perfect for snowshoe hares, which would in turn offer plentiful prey to support more Canadian lynx. The flora and fauna of the woods would change with the advance of time. 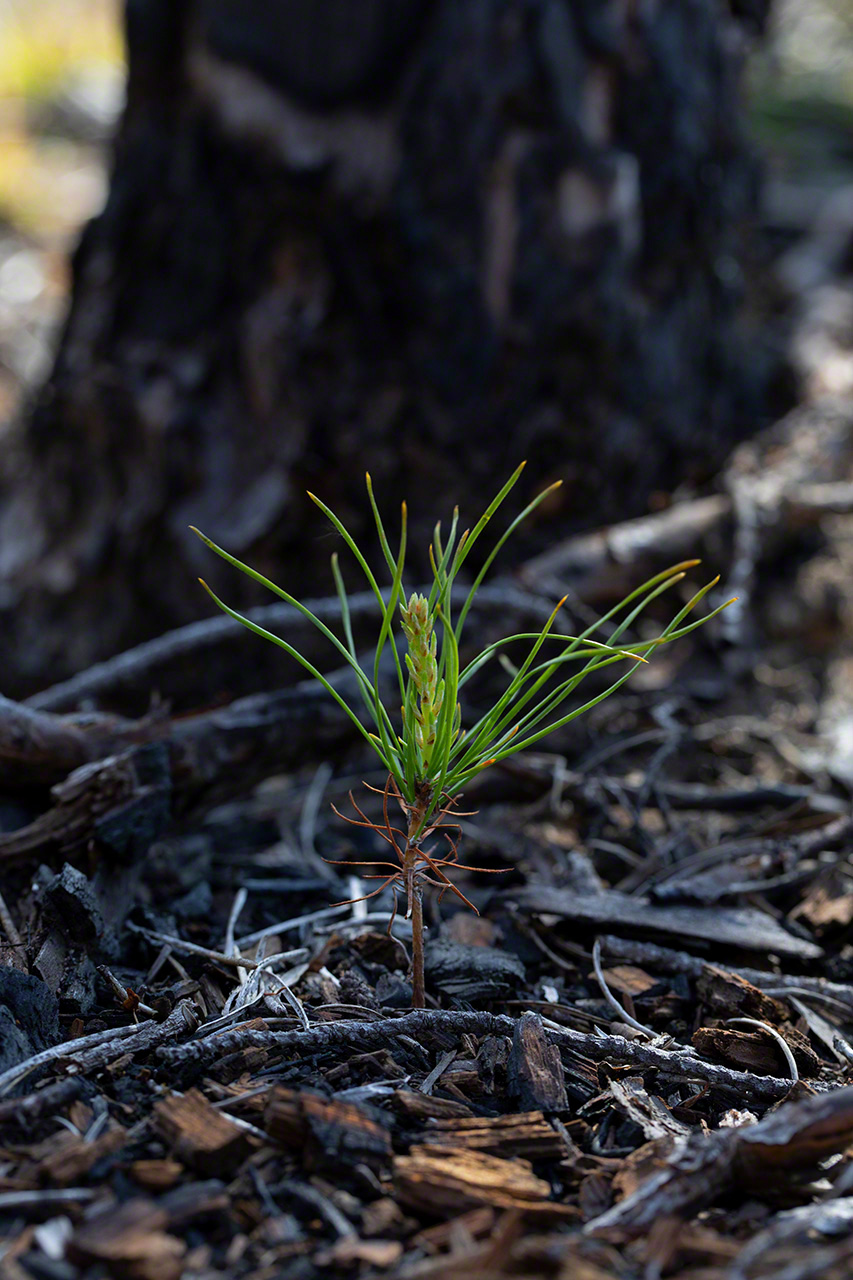 A jack pine seedling sprouting in the burned waste. (2019)

Young forest, and old. Biodiversity needs a balanced mosaic of forest at different ages, and forest fires are part of a natural cycle that helps maintain balance in that rich ecosystem. But in recent years, there is a view that climate change has created unusually high temperatures and lengthy dry spells, leading to fiercer, more frequent forest fires. I now go back every five years or so to document the changes. 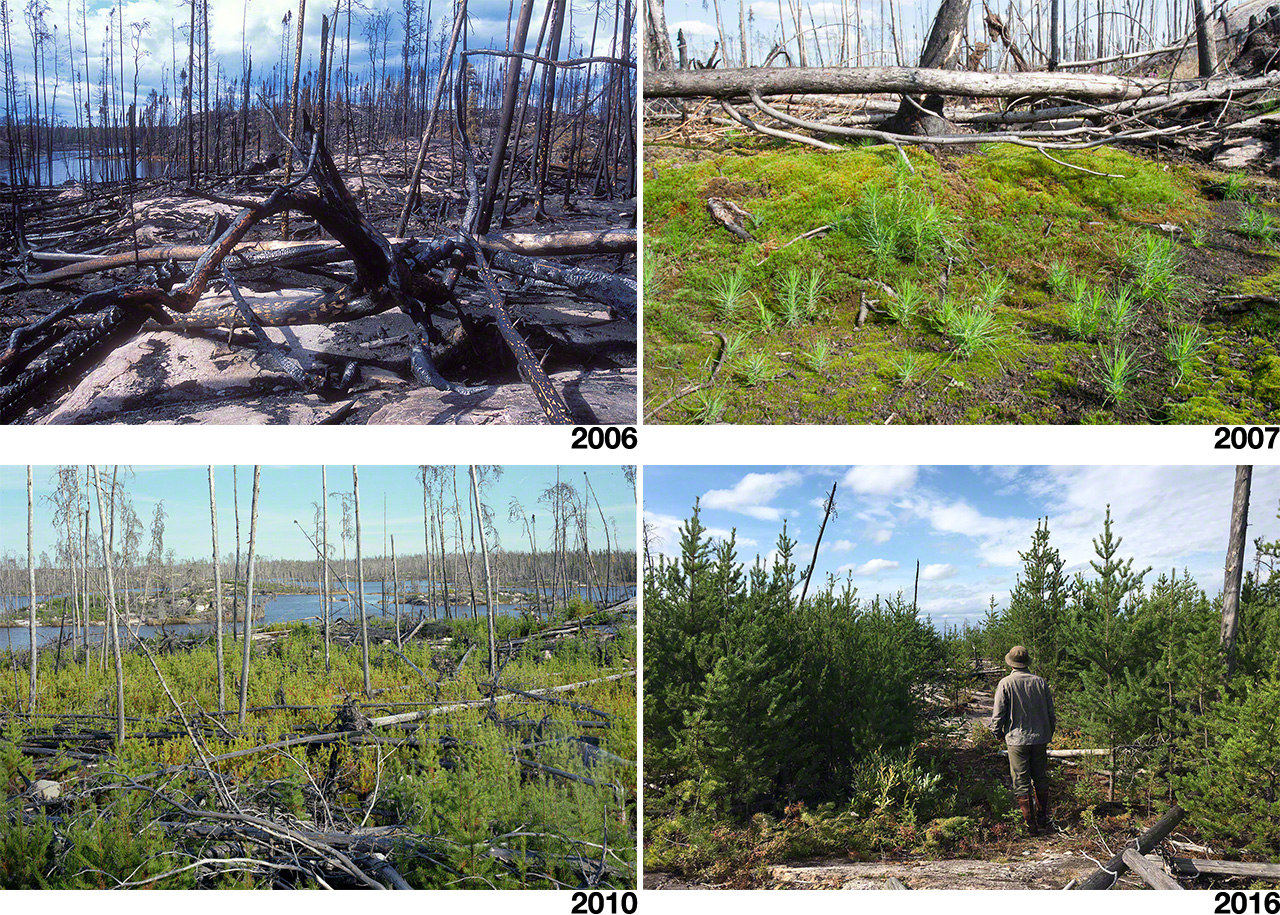 Learning from the Residents

I gained so much spending a full year in one place like that. I experienced firsthand the changing of the seasons, and celebrated the coming of spring after a long, cold winter. At the Ministry of Natural Resources, which houses the Provincial Park office, I met experts in fields like geology, forestry, conservation, and fire fighting who were generous with their time and knowledge in answering my questions. It was like going back to school for me, and they were my teachers. I wanted more. I extended my visa, but ran out of money, so I had to return to Japan after a year and a half. 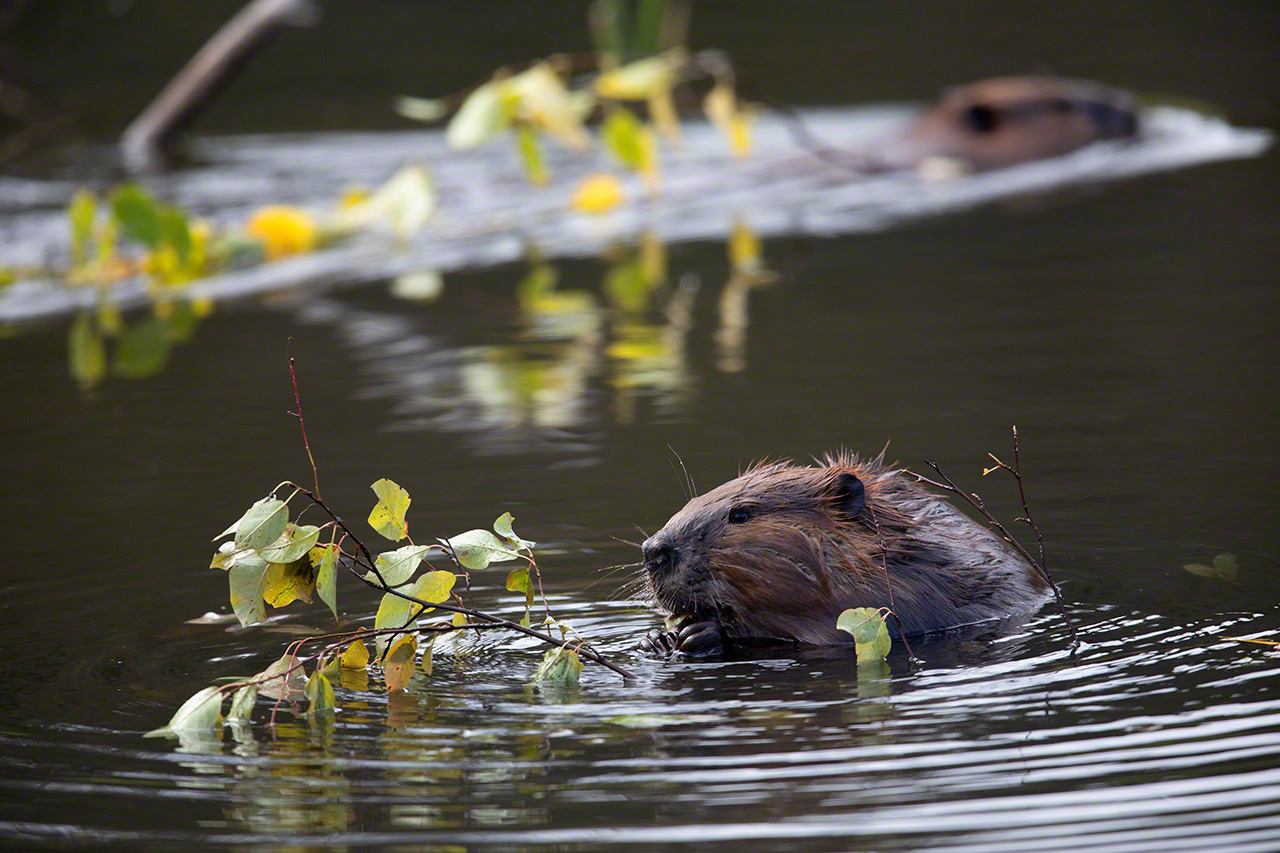 A Field Expanding over the Years

In 2009, I released a picture book for infants, Mori no dōbutsu (Animals of the Woods), and celebrated its publication with a photo exhibition at the Citizen’s Gallery in Tokyo’s Setagaya Art Museum. Since I had already released two books with World of Wonders, the exhibition drew a decent crowd. One of the visitors was a producer for an NHK program called Wairudoraifu (Wildlife). We met, and that exhibition led to us planning a television program introducing the Northwoods, with me as guide. It was a chance to use all the experiences and skills I had acquired to their very best ends.

The program featured visits to Wood Buffalo National Park and the Athabasca Sand Dunes, as well as a chance to successfully call in a moose, the world’s largest deer. Calling is an old-fashioned way of hunting, mimicking the calls of females to attract the attention of males during the autumn mating season. A conservation officer friend of mine taught me how to make the calls, and I used a megaphone made of rolled birch bark. I felt a shiver when I saw a moose with its enormous antlers emerge from the brush, proving that my voice had reached the creature. Forest visibility is poor, so animals often communicate without relying on visual signals. Learning that firsthand was an incredible experience. 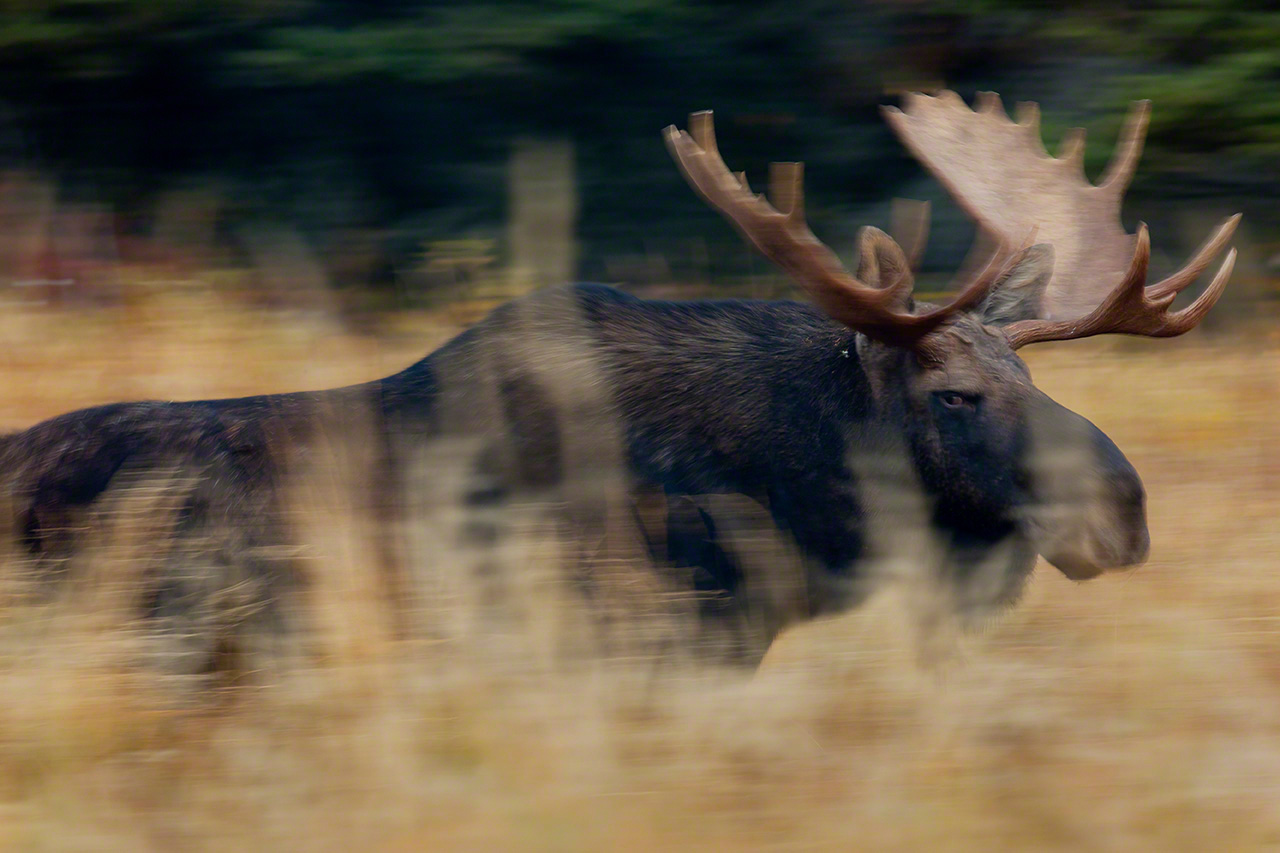 One key goal of my career, since I first decided to become a photographer, was to put together a book collecting my works. Taking photographs worthy of the term “works” is no easy thing, but I was always gathering the pieces of the puzzle that was the Northwoods, and filling in its true shape, little by little. As Jim Brandenburg had told me, “Good work takes time.” 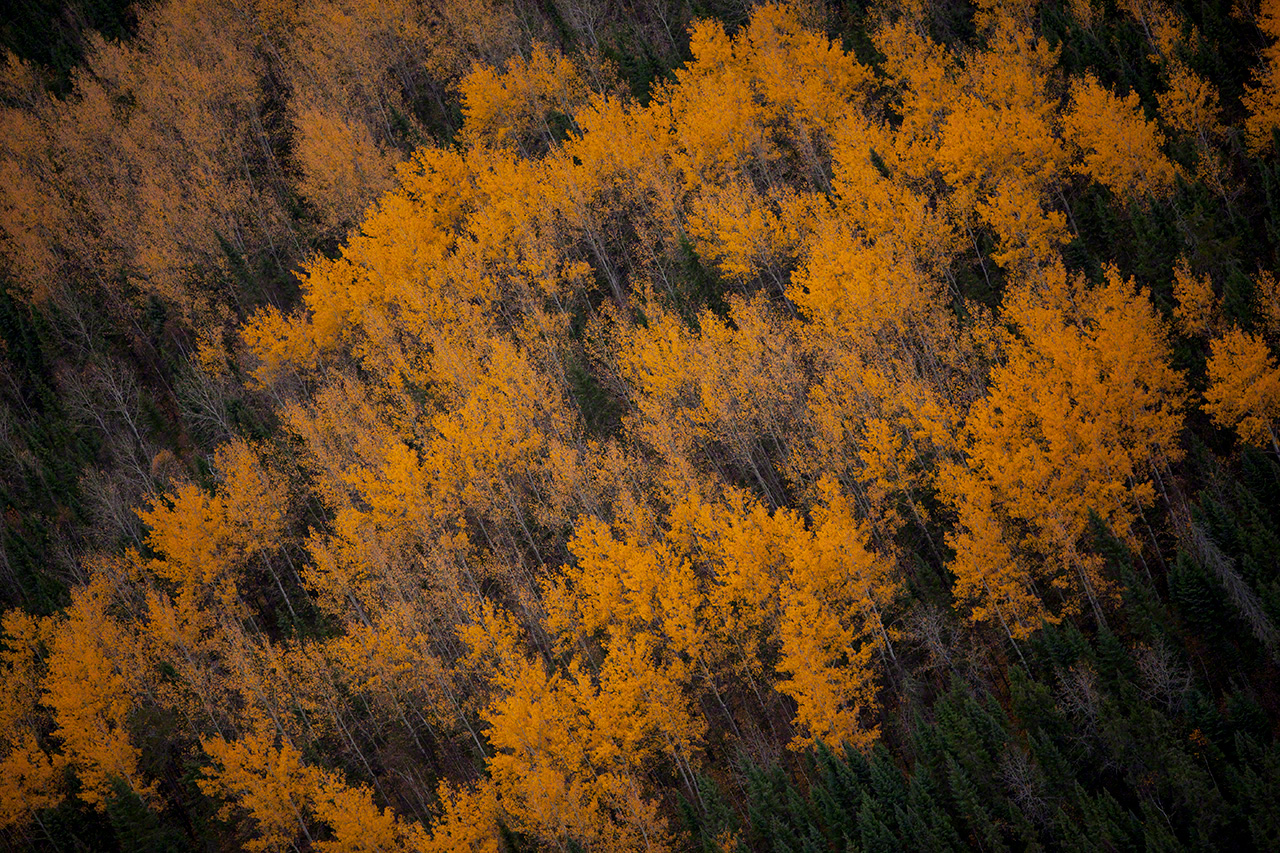 Getting to know the First Nations people who still maintain tradition as hunters and gatherers in this land, the Anishinaabe, finally gave me a new perspective on the trips I was taking.

(To be continued in the final installment.)

(Originally published in Japanese. Banner photo: A male moose called close by the imitation of a female’s call [2011]. All photos © Ōtake Hidehiro.)