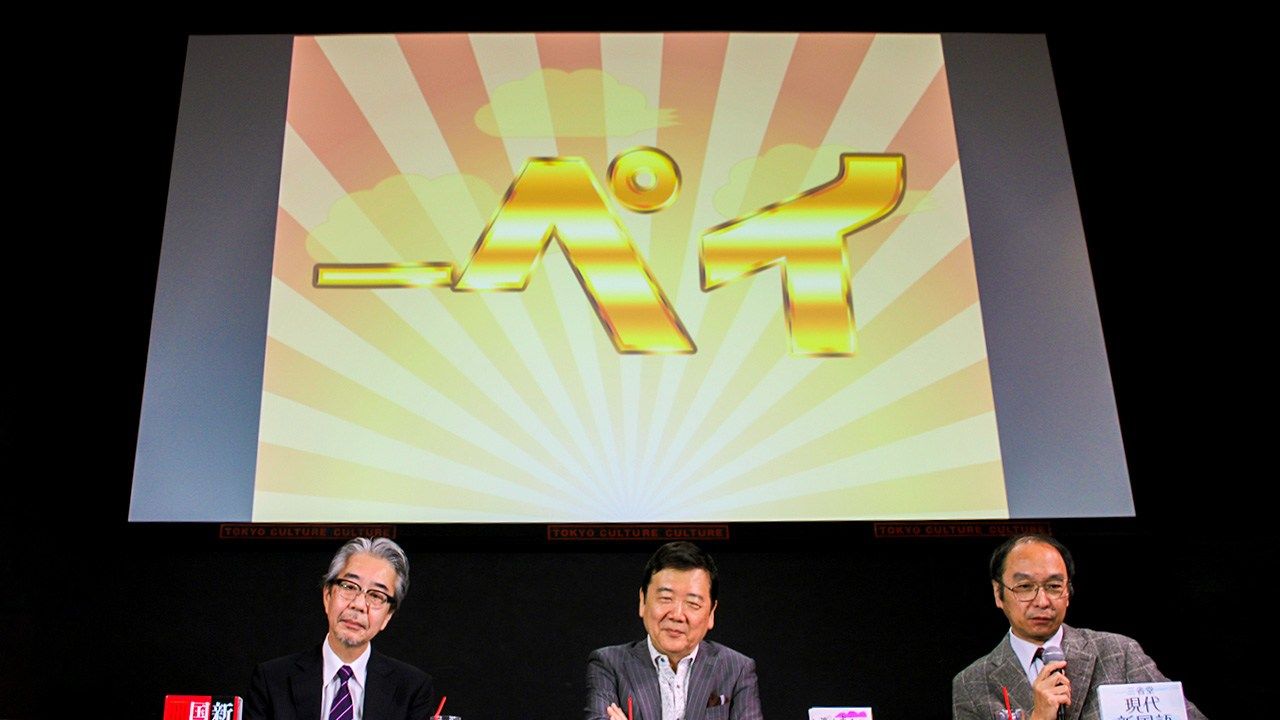 Pay It Forward: The Top New Japanese Words for 2019

Taxation had a surprising influence on the Japanese language in 2019, as seen in the words of the year chosen in early December by two of Japan’s top dictionary publishers. October’s consumption tax hike was offset by discounts and reward points for shoppers using cashless payment, giving such systems a major boost. By the end of 2019, Line Pay, first released in 2014, was jostling with similar services like PayPay, Amazon Pay, Origami Pay, Rakuten Pay, FamiPay, and Yūcho Pay. The conspicuous resemblance in their names led publisher Sanseidō to name the suffix –pei as its word of the year.

The new standard consumption tax rate is 10%, but in the two-tiered system, some items like food are still taxed at the former 8% rate. While takeout food is also 8%, the rate for dining in on-site eating spaces is 10%, whether the food is consumed at a fine restaurant or a convenience store eat-in space—something hard for many to accept. Thus, the phenomenon emerged of paying 8% at the convenience store cash register, as if to take out, and then taking one’s food to the eat-in space anyway. This action, dubbed īto-in datsuzei, or “eat-in tax evasion,” was picked as word of the year by the publisher Shōgakukan. It may seem trivial or petty to dodge taxation of a few yen, but after the hike, money does not go as far as it used to.

Japan’s first ever hosting of the Rugby World Cup threw the spotlight on the sport, winning fresh, fervent interest from people who previously knew little about it. There was some condescension shown toward the niwaka fan, or “fair-weather fans,” and Shōgakukan chose this word as a runner-up. Sanseidō, meanwhile, had the first part of the phrase niwaka—literally “sudden”—in second place. Incidentally, there were also many longstanding supporters who extended a warm welcome to rugby newbies.

Shōgakukan’s Top New Words of the Year for 2019

イートイン脱税 — Īto-in datsuzei [Winner]. Practitioners of “eat-in tax evasion” buy convenience store food taxed at 8%, as if they are planning to take it out, but then proceed to chow down in the eat-in space, meaning that they should have paid 10% consumption tax.

にわかファン — Niwaka fan [Runner-up]. Japan had many “fair-weather fans,” whose enthusiasm for rugby came out of nowhere during the World Cup.

闇営業 — Yami eigyō [Runner-up]. The “shady business” of various comedians who earned extra cash by performing for groups of gangsters was big news in Japan in 2019.

(Originally published in Japanese on December 10, 2019. Banner photo: At a December 3 Tokyo event, Sanseidō announces its winner of the word of 2019 as the suffix –pei.)