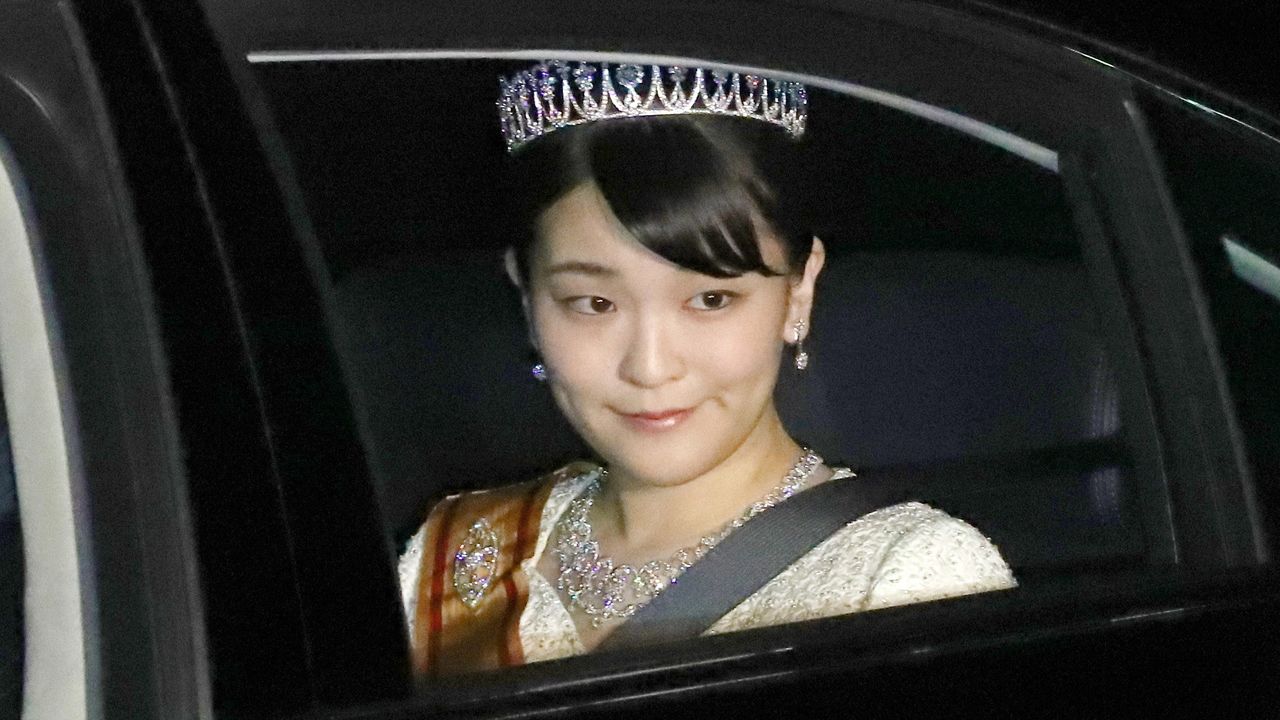 Princess Mako’s Postponed Marriage: The Controversy and Its Impact on the Imperial Household

Society Imperial Family Jan 10, 2020
Princess Mako, the 28-year-old eldest daughter of Crown Prince Akishino and Princess Kiko, has seen her marriage to a commoner postponed for nearly two years. This has been a cause of concern for the imperial family as a whole, and is influencing the debate over whether women should be allowed to head imperial family branches. An announcement is expected in February 2020 on the current status of the wedding.

To better understand the feelings of Princess Mako, we should first look back on the incidents and statements up to now regarding her planned marriage. Her informal engagement with her former classmate at International Christian University, Komuro Kei, was announced in September 2017, after a roughly five-year relationship. The couple held a press conference after first meeting with Emperor Akihito and Empress Michiko.

Princess Mako made the following comments at the press conference: “Komuro-san has been a warm and encouraging presence in my life. The first thing that attracted me was his bright smile that shines like the sun. I was also drawn to how he has a strong will but at the same time makes a lot of effort, and the way he responds to things with an open heart.”

Komuro, for his part, said the following: “Princess Mako is someone who quietly looks over me like the moon. I was strongly drawn to her deeply affectionate nature and strongly held beliefs.”

Princess Mako added: “From the time I was a child, I was aware that upon marrying I would give up my position as a member of the imperial household. Given that situation, I tried to assist the emperor and do whatever I could do to fulfill my role as a member of the imperial household, while also valuing my own life. My parents respected my way of thinking and provided me with advice and guidance. I would be very happy if Komuro-san and I can build a warm and comfortable household full of smiling faces.

Komuro also said: “I think that there is a heavy responsibility in entering a relationship with a princess, and I take that responsibility very seriously. Princess Mako always shows consideration so that I won’t feel that burden, which has made it possible for us to have a very natural relationship. Since there is always this natural feeling between us, I hope we will be able to build a peaceful household.” 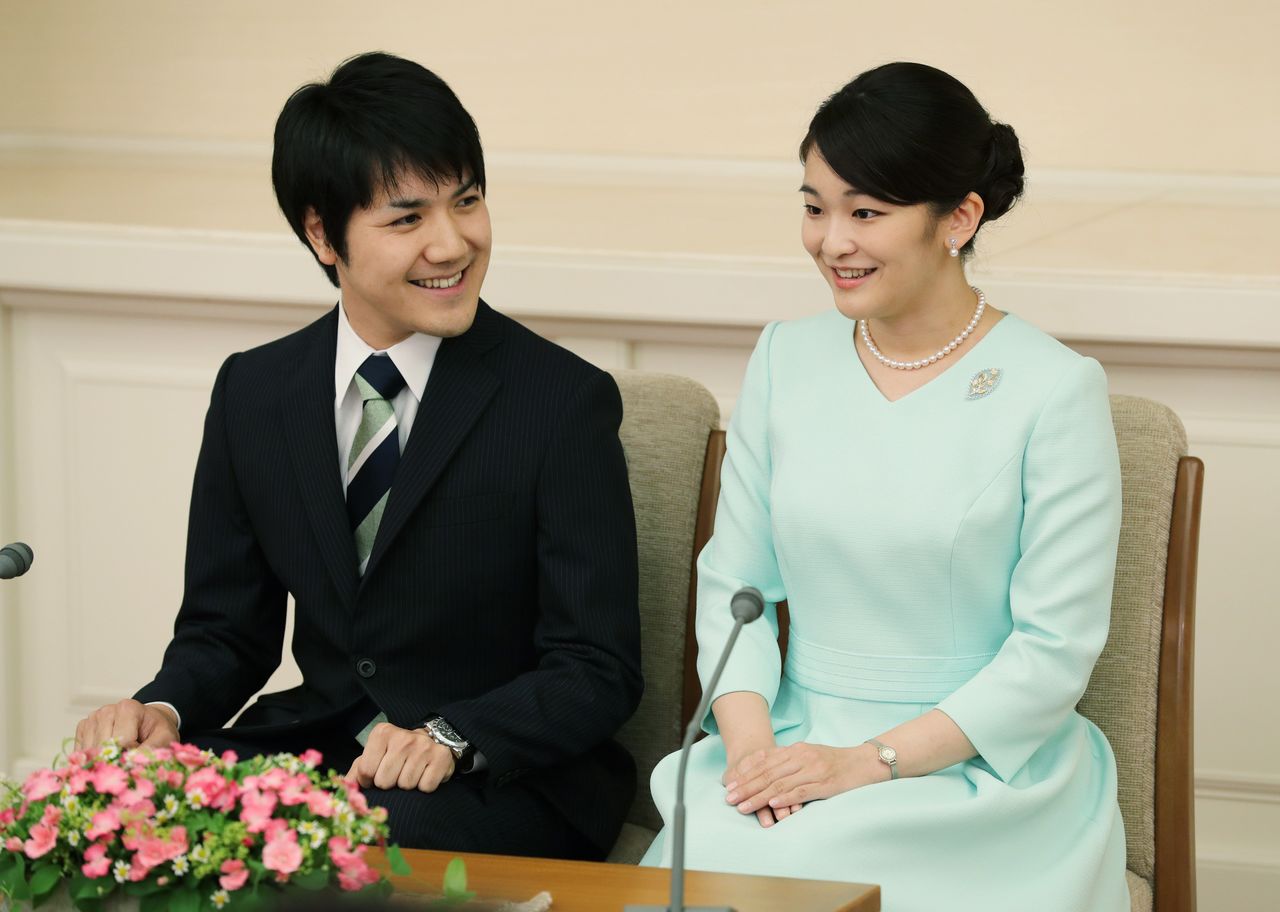 Princess Mako, the eldest daughter of Crown Prince Akishino and Princess Kiko, with Komuro Kei at the September 3, 2017, press conference held at the Akasaka Imperial Estate in Tokyo’s Minato Ward to announce their engagement. (© Jiji)

A Wedding Put Off for Two Years

The day of their engagement announcement probably marked the peak of their happiness. Although the date of the marriage was announced in November 2017, not long after the press conference it was revealed that Komuro’s family was embroiled in a problem involving a ¥4 million loan. In February 2018, the Imperial Household Agency announced that the marriage arrangements, starting with the betrothal ceremony, would be postponed. It was expected that the marriage would take place in 2020, following the various ceremonies to mark the ascension of the new Emperor.

When the postponement was announced, the couple issued the following statement through the Imperial Household Agency: “We had acted too hastily in many respects. We have reached the decision that it would be more appropriate to take more ample time to make the necessary preparations. The Emperor and Empress respect the decision we have made. We are looking on the postponement as an opportunity, so we would like to make good use of this time prior to the wedding to prepare for our new life together.”

The Need for an “Appropriate Response”

In August 2018, with his family debt problem still unresolved, Komuro embarked on a planned three-year course of study in the United States to earn a law degree. It is said that he and Princess Mako will stay in close contact online.

“As you know, the weekly tabloids are printing articles almost every week about Komuro-san. We have only been in contact with him occasionally, once every two or three months. If the two of them still have the intention to get married, then I think that an appropriate response should be made. Since it is still prior to the betrothal, I would refrain from saying anything about the other family, but in any case the important thing is to make the appropriate response. Clearly, unless many people can be satisfied and pleased with the situation, we will not be able to carry out the betrothal ceremony.”

Princess Kiko, for her part, said the following: “For our family, this has been a very difficult situation, but we remain aware of how precious and irreplaceable our eldest daughter Mako is. Our feeling toward her will not change, so we want to everything we can to look out for her interests.” 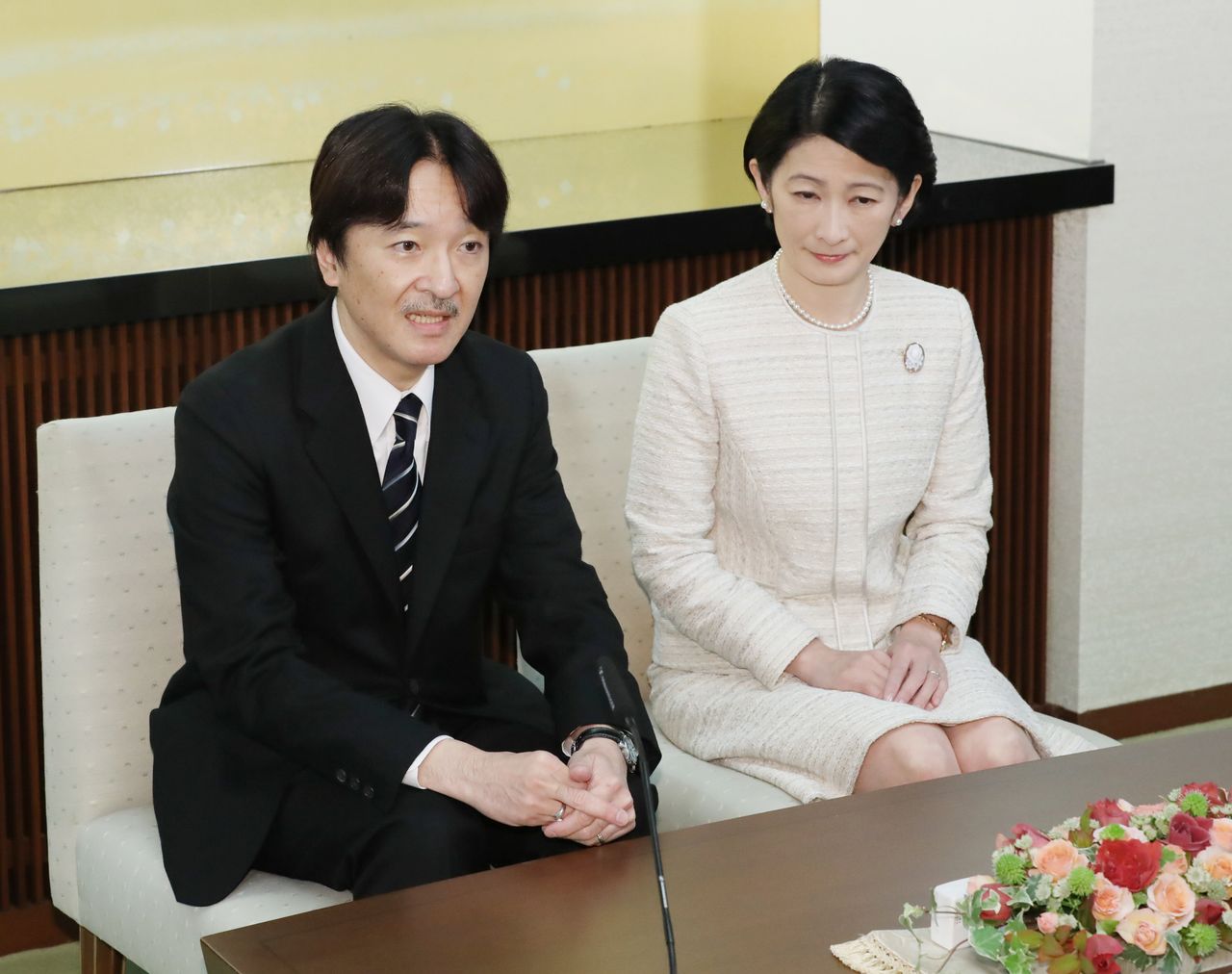 Prince Akishino held a press conference on November 22, 2018, at his residence in Tokyo with wife, Princess Kiko, at which they answered questions about the postponed marriage of their eldest daughter, Princess Mako. (© Jiji)

Two months later, on January 2019, Komuro released a written statement through his lawyer that included the following key information:

“My mother and her former fiancé were engaged in 2010, but two years later he canceled the engagement. Although it was sudden, my mother accepted his decision and promised to repay him money he had spent during the engagement. He said that he had not intended for her to repay him, though, so both of them recognized that the financial issues, including the support and compensation money, have been resolved. However, one year after that [in 2013], my mother received a letter from her ex-fiancé asking her to repay the cost he had borne during their relationship. Many media publications reported that there was a trouble related to an outstanding loan, but my mother and I had both understood that the situation regarding past support had been resolved, so we were confused by those reports. Both my mother and I were grateful for the support she received from her ex-fiancé and would like to do whatever we can to gain his understanding.”

Not many people were satisfied, however, with his explanation that the problem was solved and the “support money” would not be repaid. Moreover, many Japanese people questioned his engagement to Princess Mako. They wondered why he did not use that opportunity to pay back the “support money” and thereby break through the deadlock. “The problem was not the lawsuit about whether to pay or not, but his sincerity,” many thought.

Princess Kako Comes In for Criticism

A written statement issued in March 2019 by Princess Kako, the second daughter of Prince Akishino and Princess Kiko, on the occasion of her graduation from university, also caused a stir. In it, she wrote: “When it comes to marriage, I think the feelings of the people involved are what is important. I hope that my older sister’s wishes as an individual will be fulfilled.” These frank remarks about her sister’s feelings were criticized as “lacking an awareness of being a member of the imperial household.” 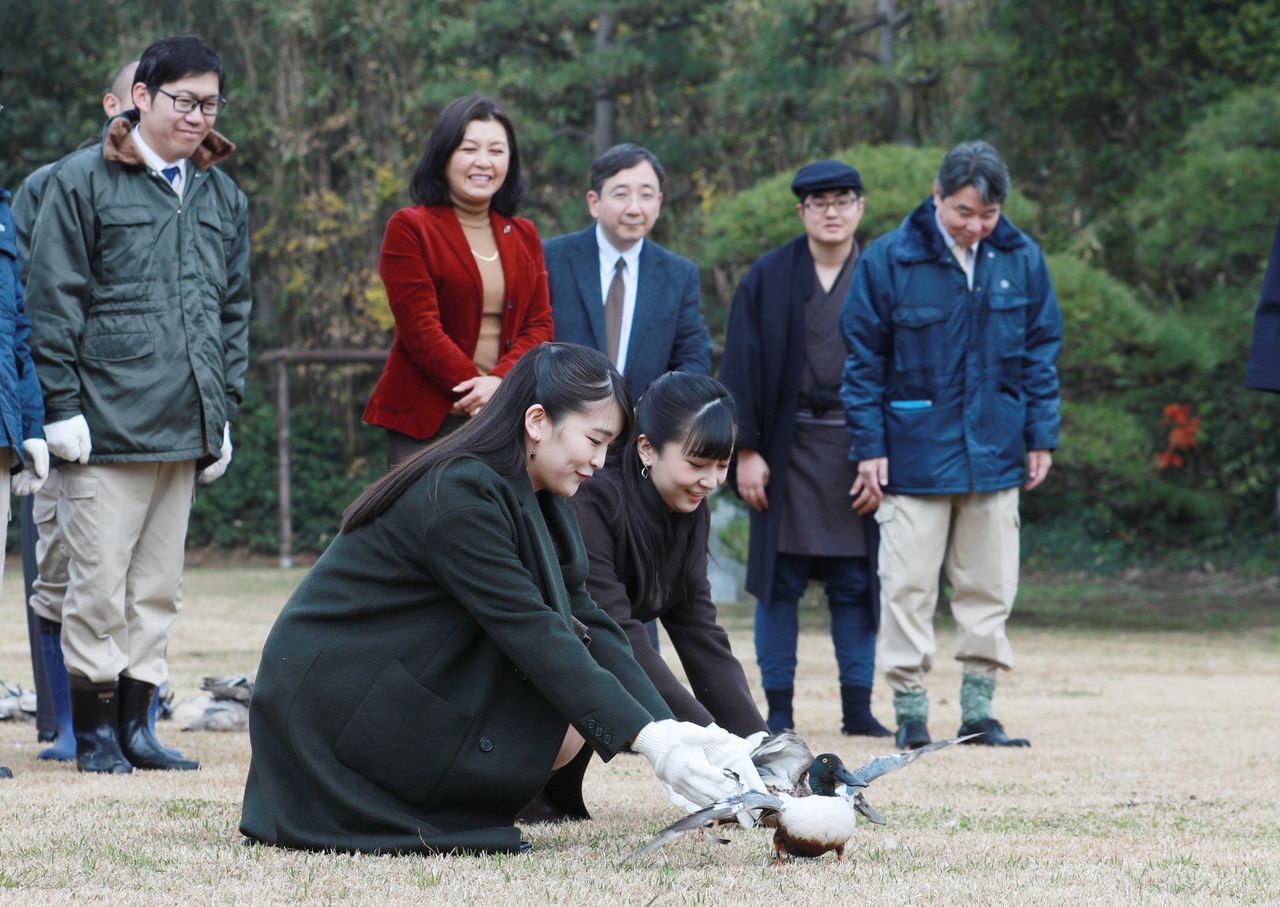 Princess Mako and Princess Kako release a duck on December 17, 2019, at an annual event held at the Shinhama Imperial Wild Duck Preserve in Ichikawa, Chiba Prefecture, for ambassadors and their spouses. (© Jiji)

A Falling Out Between Prince and Fiancé?

“The outlook for the marriage has not changed since the time I spoke about it last year. However, because two years will have passed as of next February since the initial postponement, I think there is a need to make some sort of announcement. I have not had an opportunity to speak to my eldest daughter about the marriage plans. Also, I have not been in contact with the Komuro household.”

This lack of contact between the families marks a major change from the previous year. It also seems that Prince Akishino was not satisfied with Komuro’s January 2019 statement on his family’s financial background.

Concern from the Emperor Emeritus and Empress Emerita

When female members of the imperial household marry and become private citizens, they receive a lump-sum payment of over ¥100 million, so many people have an interest in Princess Mako’s marriage situation, and the media’s reporting on the issue is not likely to let up.

Emperor Emeritus Akihito and Empress Emerita Michiko are also very concerned about the unclear situation surrounding the planned marriage of Princess Mako. She is the first grandchild of the 86-year-old Emperor Emeritus, so it must have been difficult for him to observe the uproar surrounding the postponement toward the end of his reign. Some reports even said that the controversy negatively affected the health of the imperial couple.

The possibility of a women heading an imperial household was envisaged in the case of Emperor Emeritus Akihito’s granddaughter Princess Mako. The aim of the proposal was to assist the emperor and stem a decline in the activities of the imperial household. The idea was that when her younger brother, Prince Hisahito, ascends to the throne, which would occur under the present system, she could provide him with needed support in an imperial household with a drastically reduced membership.

The succession debate will consider whether to allow spouses of female members of the imperial household and their children to also gain status as royals. But in the wake of the current marriage controversy, it seems likely that there will be passionate opposition to allowing a woman to head an imperial household, and it is possible that public opinion will also be divided over the issue.

Princess Mako’s marriage is an important decision for the young couple, as well as for the new Reiwa-era imperial household that began with the ascension of Emperor Naruhito. One hopes that the situation will be swiftly resolved so that the postponement, already two years long, will not continue further.

(Originally published in Japanese. Banner photo: Princess Mako of Akishino traveling from Hanzōmon to the Imperial Palace to attend the enthronement ceremony of Emperor Naruhito on October 22, 2019. © Jiji.)