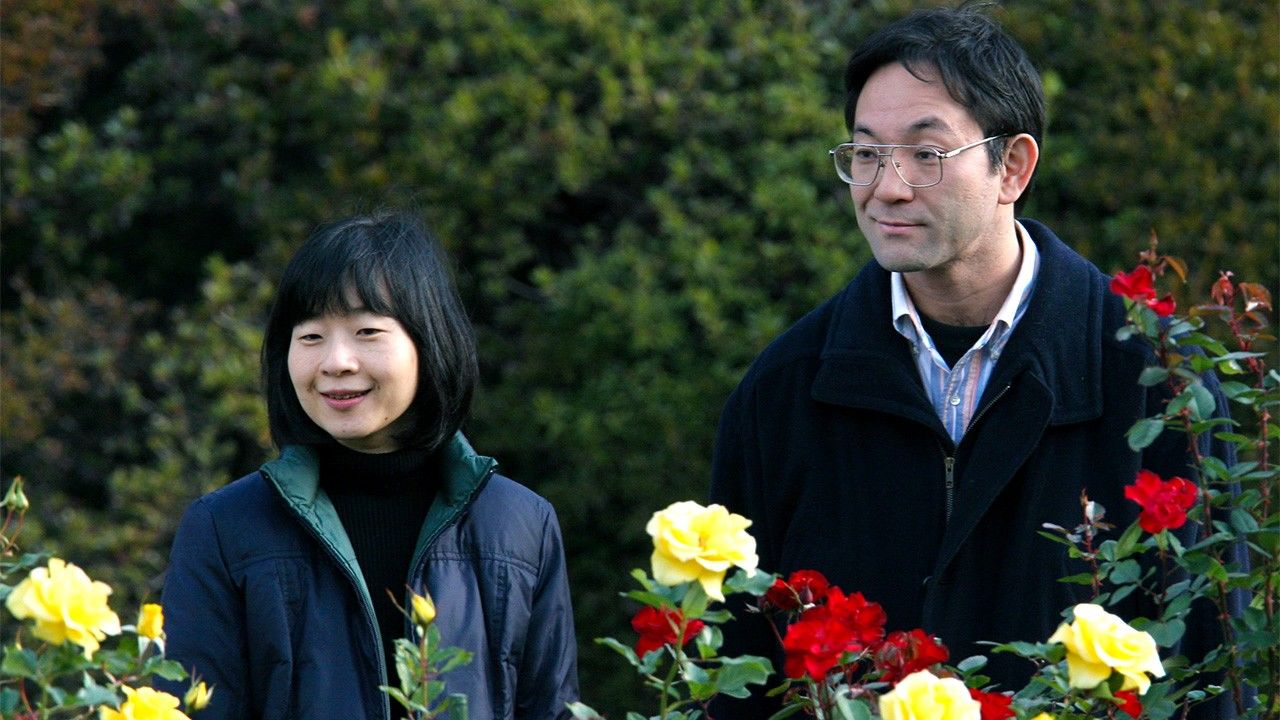 Kuroda Sayako: The Emperor’s Sister as a Private Citizen

Society Imperial Family Jan 13, 2022
Born a princess, Kuroda Sayako, the sister of Emperor Naruhito, has been a private citizen since she lost her imperial status upon marrying in 2005. She now serves as the chief priestess at Ise Shrine.

When Princess Aiko celebrated her coming of age on December 5, 2021, she wore a tiara borrowed from her aunt Kuroda Sayako, the younger sister of her father Emperor Naruhito. A recent tradition has seen tiaras being made for Japan’s imperial princesses when they turn 20. They belong to the state, however, and when princesses marry and lose imperial status, they must return them. For example, when Princess Mako became Komuro Mako at the time of her wedding in October, she had to give back her tiara. 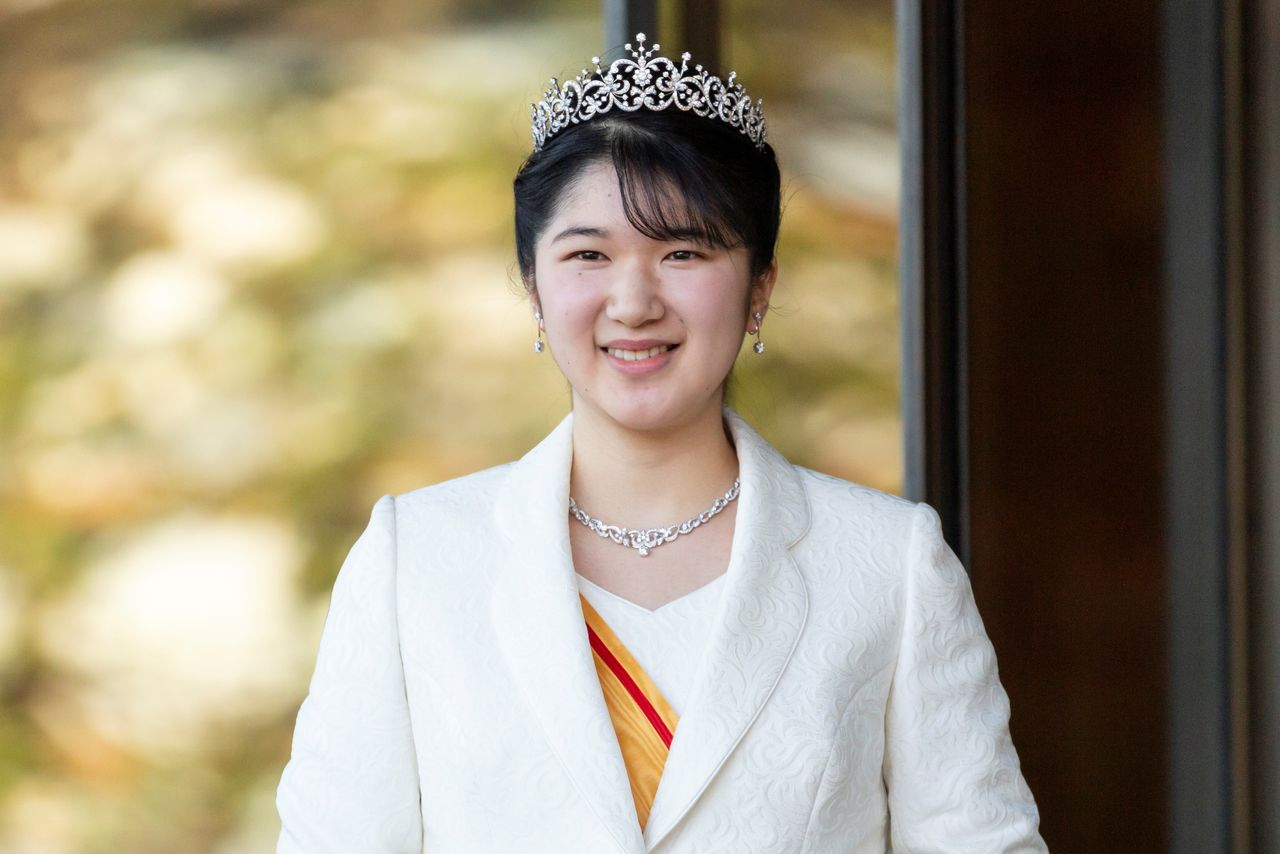 Princess Aiko wears her aunt Kuroda Sayako’s tiara at a ceremony at the Imperial Palace on December 5, 2021, celebrating her coming of age. (© Reuters; pool photo)

The tiara worn by Princess Aiko was originally made for then Princess Sayako when she turned 20 in 1989. At that time, though, her parents Emperor Akihito and Empress Michiko paid for it out of funds made available for their private usage. As such, Sayako did not have to return it after marriage.

Princess Aiko did not have a new tiara made as the imperial household decided it seemed inappropriate amid the hardships caused by the COVID-19 pandemic, so she borrowed her aunt’s instead. Kuroda Sayako and her husband Yoshiki stood out for their understated image among the VIPs when they attended the ceremony as he drove an ordinary car to the Imperial Palace, with the former princess sitting beside him in the passenger seat.

Princess Sayako was born on April 18, 1969, as the third child of Akihito and Michiko. Unlike her brothers—now Emperor Naruhito and Crown Prince Fumihito—she was educated under the assumption that she would one day get married and become a private citizen. For 10 years from 1977, when she was an elementary school student, she went on trips together with just her mother. While in junior high school, she took up buyō (Japanese traditional dance) and she has taken part in public performances at the National Theater.

In 1988, she began her studies in Japanese language and literature at Gakushūin University—the same field that Princess Aiko is studying now. The next year Emperor Shōwa passed away, and her father Akihito became emperor. After graduating in 1992, she became a research assistant at the Yamashina Institute for Ornithology, where she worked two days a week. She was said to be the first Japanese princess to draw a salary. Later, as a researcher, she cowrote reports on bird observations around the Imperial Palace and Akasaka Estate.

Princess Sayako also performed duties as an adult member of the imperial family, making official visits to 14 countries, including 8 by herself, such as a November 1995 trip to Brazil to mark the hundredth anniversary of diplomatic relations between the country and Japan. She became involved in guide dog training and other welfare activities, as well as being a confidant and source of support for her parents.

Considering the frenzy that would surround the marriage of an emperor’s daughter, at a press conference Princess Sayako once called on the media not to cause trouble for the man involved. In 2003, at the age of 34, she once again met Kuroda Yoshiki, a friend of her brother Fumihito and employee of the Tokyo Metropolitan Government, at a gathering hosted by her brother. The two men had been classmates at Gakushūin since elementary school days, and Yoshiki had often visited the Akasaka Estate. Princess Sayako remembered the tall friend who always had a serious expression.

Yoshiki was in the same clubs as Fumihito at high school. He was also in a natural culture research group led by Fumihito in which Kawashima Kiko (later to marry Fumihito) was a member. Yoshiki’s father, who worked for Toyota, died while his son was studying law. After graduating, Yoshiki joined a major bank, but left in 1996 at the age of 31. The following year, he started working for the Tokyo Metropolitan Government.

He said that the reason he changed jobs was because he wanted to work in the public sector. It has also been suggested that he chose the position as he lived with his mother in a Harajuku apartment in Tokyo, and unlike a position at Toyota, a Tokyo governmental job would involve no possibility of being assigned to work elsewhere in the country. His duties were mainly in urban development and construction.

Then came his fated meeting with Princess Sayako. Playing Cupid, Prince Fumihito offered his residence as a location for dates. The two became formally engaged in December 2004, and a press conference followed. 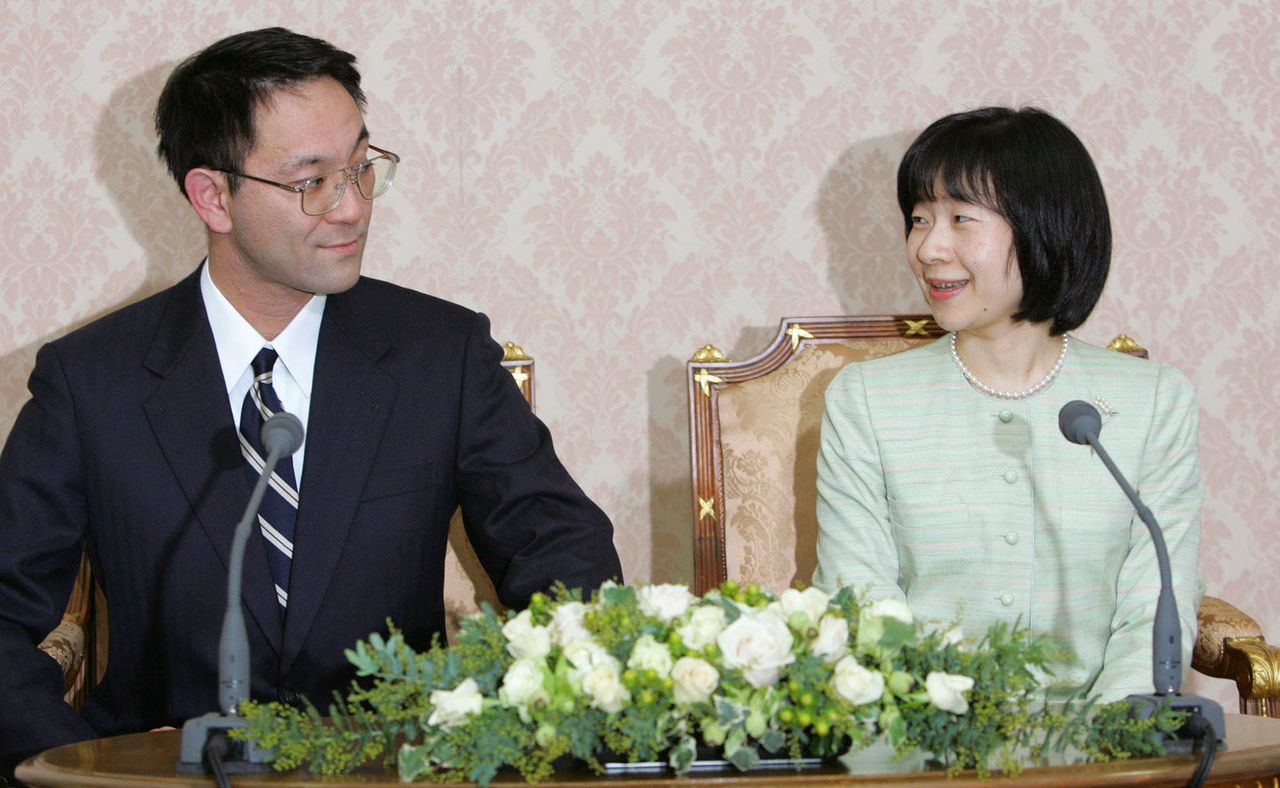 Princess Sayako said, “We met for the first time in a while; the sight of him joining the group with a warm smile lingered in my heart, and we had a pleasant chat.” She added, “As we talked more on different occasions, gradually our thoughts turned naturally toward marriage.”

Kuroda Yoshiki expressed similar sentiments, and said, “I remember we were having tea at Prince Akishino’s residence when I asked her, ‘Will you marry me?’”

Princess Sayako recounted how her parents were delighted and congratulated her. She also said, “Since I was very small, I knew that marriage would mean leaving the imperial family, so although I have some anxiety about starting a new life and don’t know what this will involve, I don’t feel anything entirely unexpected.”

I remember watching the press conference and being struck by Princess Sayako’s elegant manner of speech and Kuroda’s unaffected, good character.

From Housewife to Priestess

The couple married in November 2005. Their wedding ceremony, held at the Imperial Hotel in Tokyo, was attended by her parents and other family members, and Tokyo Governor Ishihara Shintarō made a toast at the reception.

The next year, the newlyweds bought a luxury condominium with high-level security near their alma mater of Gakushūin University. Kuroda Sayako paid around two-thirds of the price, making use of a ¥152.5 million payment she received from the state upon leaving the imperial family. Her husband took out a loan to cover the remainder.

Having become a full-time housewife, Sayako often went out to the local shopping streets. At first, specially assigned Tokyo Metropolitan Police Department officers stood by at a discreet distance, but now the local police provide a light presence, as necessary. Sometimes, she visits her parents and attends court ceremonies with her husband.

The year 2012 was a turning point. She became a high priestess of the Ise Shrine, which is dedicated to Amaterasu, the sun goddess said to be the ancestor to Japan’s emperors. Until the next year, she assisted her elderly aunt Ikeda Atsuko (Akihito’s elder sister), who was the chief priestess. The priestesses perform Shintō rituals on behalf of the emperor, and in the postwar era the role has been taken on by daughters of emperors. 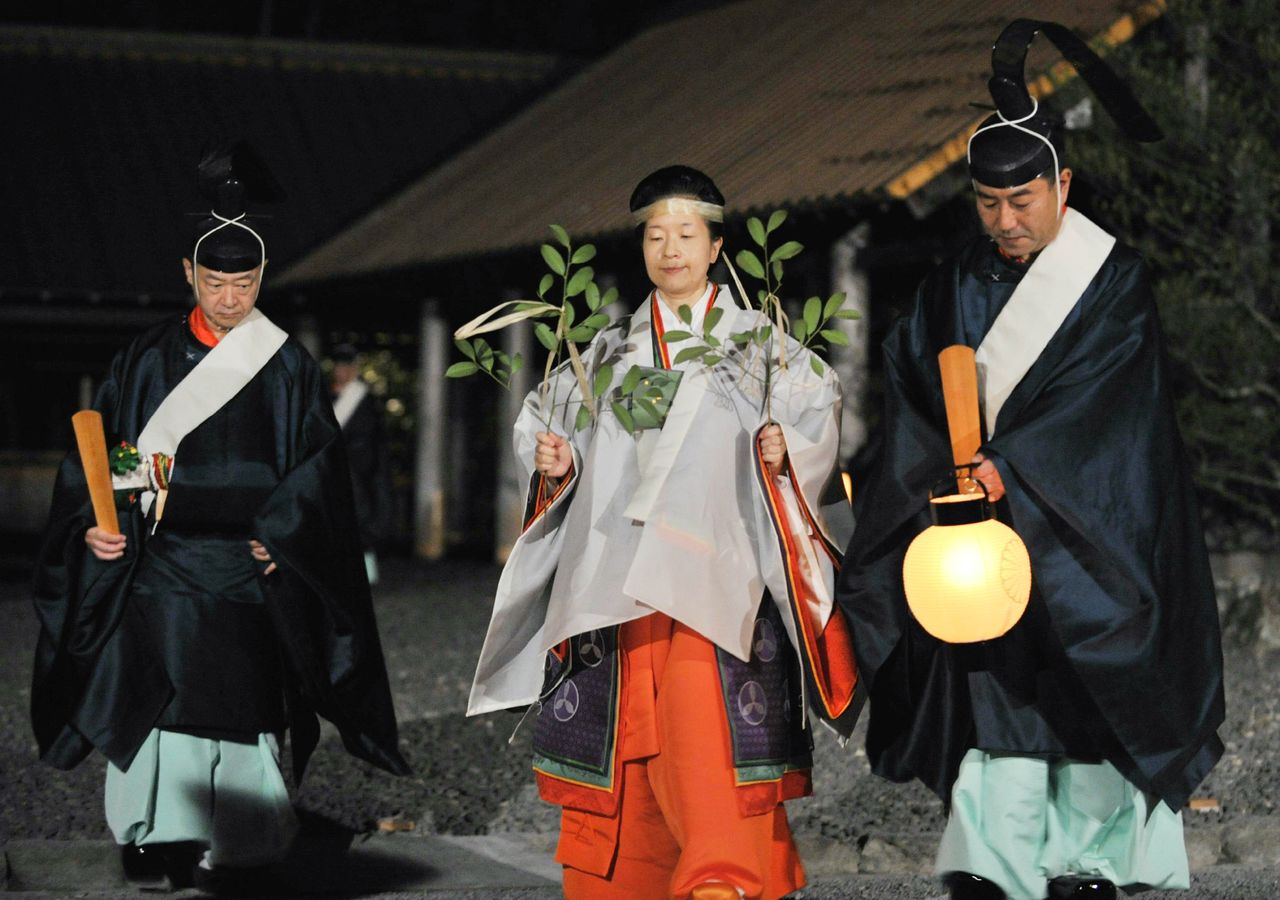 Kuroda Sayako (center) as high priestess holds a tamagushi made from a sacred sakaki branch in a ritual at Ise Shrine in Mie Prefecture on October 5, 2013. (© Jiji; pool photo)

Although she usually appears mild, there is a sublimity in her expression when she wears the white jacket and vermilion hakama of a priestess. At the Utakai Hajime (New Year’s Poetry Reading) of 2014, Empress Michiko wrote of her daughter’s resolution in a poem.

“I now leave to serve
the deity soon to be moved
to a newly built shrine.”
So saying with eyes serene,
our daughter left for Ise.

In 2017, her aunt retired and Sayako became chief priestess at Ise Shrine. She now spends several weeks each year away from Tokyo, living in Ise. Before her father abdicated in April 2019, she was present when the imperial couple traveled to Ise Shrine for a ceremony to report the news to Amaterasu.

Kuroda Yoshiki was promoted in April 2021 from an urban planning section head to a more important general position. Section heads in the Tokyo Metropolitan Government typically take home an annual salary of ¥10 million, but the new position is better paid. Around this time, the couple also completed their payments on the home loan, after 15 years.

Raised a princess and now a private citizen, Kuroda Sayako has found a calm sense of purpose in offering prayers for the people and the imperial family.