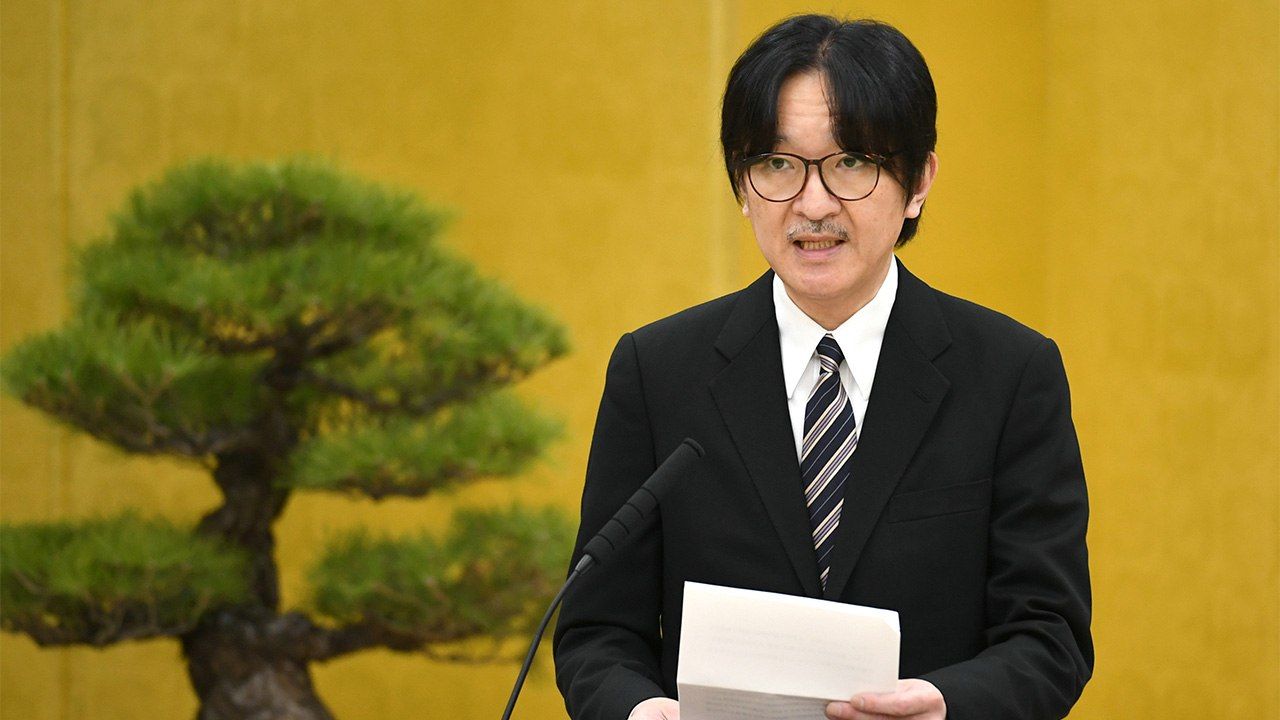 Society Imperial Family Jun 28, 2022
Japanese Crown Prince Fumihito is known for his candidness. His opinions on topics like life as a royal, the issue of imperial abdication, and his daughter Mako’s marriage have stirred controversy in some circles. The new book Akishino-no-Miya penned by a reporter with 30 years of experience covering the prince sheds light on this sometimes unconventional figure.

The new book Akishino-no-Miya by Emori Keiji is an intimate look into the mind of Crown Prince Fumihito. The work, which takes its name from the prince’s official title, is based on 37 interviews conducted from 2017 to January of this year. Emori, a former reporter for major daily Mainichi Shimbun, began covering the crown prince more than 30 years ago through his connection with the late Kawashima Tatsuhiko, professor emeritus at Gakushūin University and father of Fumihito’s wife Princess Kiko. The book gives readers a first-person perspective on the often frank-spoken member of the Japanese imperial family.

Fumihito has on occasion made surprisingly frank statements that have ruffled the feathers of certain members of the public. The last few years have been dominated by the turbulent events surrounding his eldest daughter Princess Mako’s marriage to her university sweetheart, Komuro Kei.

Events started innocently enough in May 2017 with the announcement that the couple were to be engaged. Fumihito offered his cheerful approval of the union.

Mako would have to leave the imperial family upon marriage, and questions swirled as to how the pair would support themselves. In a June 2017 interview, Fumihito sounded optimistic about their future. He suggested that Komuro could continue his job as a paralegal at a law office and that Mako could find work as well. He also proposed that the two could forego the high rents of Tokyo and find an apartment in one of the neighboring prefectures, saying that “it’s up to them to build a life within their means.”

This sentiment clearly illustrates the crown prince’s belief that the marriage was solely up to the discretion of the couple. Not long after the engagement was announced, though, reports of financial troubles involving Komuro’s mother surfaced in the press. These would lead to the wedding being postponed for two years until the issue was resolved. Out of concern, Fumihito met with Komuro and his mother several times and urged them to clarify the matter to the public. With the affair still hanging in the air, though, Komuro in August 2018 left to study in the United States.

Fumihito, seemingly bewildered by this turn of events, wondered at what his daughter and her fiancé had in mind. He watched with concern as the media focused insistent attention on the couple over the next two years until their marriage in October 2021. While these events were transpiring, the crown prince was also concerned with the question of imperial abdication surrounding then Emperor Akihito. 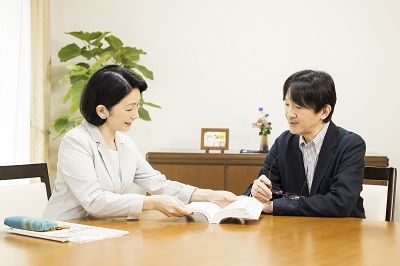 In August 2016, a video message by the emperor conveying his wish to abdicate sent shockwaves through Japan. There is no provision for abdication in the Imperial House Law, and in the video, Akihito argued against the idea of an aged emperor, “the symbol of the State,” who is no longer physically able to perform his duties. Speaking two years after the release of the video, Fumihito shared his support for allowing the emperor to step down.

The crown prince admitted that he had learned about the emperor’s desire to abdicate “well in advance” of the video message and that his father had “shared his concern that it may become difficult for him as the symbol of the state to carry out his duties.” Framing his views in human terms, Fumihito contended that “it is only natural that an individual upon reaching a certain age be allowed to retire and spend their remaining years as they see fit. This is as true for the emperor as any other person.”

The crown prince expressed confidence that the public would be in favor of establishing a retirement age for the Chrysanthemum Throne. His arguments did not find traction in conservative circles, however. During hearings by the government’s advisory council on the abdication issue, conservative-minded journalists and scholars openly objected to the idea, effectively stamping out consideration of the matter.

Traditionalists argued that it was best that the emperor remain on the throne for life. And if age made it difficult for him to fulfill his duties of state, the monarch could curtail his responsibilities and focus on offering prayers for the peace and wellbeing of citizens from the confines of the palace.

Fumihito questioned such thinking, asking, “What do they propose should be done if the emperor is incapacitated and no longer able to pray?” While acknowledging the importance of these prayers, he emphasized that the emperor needs to have a public presence, saying that “it is no less important that he meets the people and listens to their voices so as to be close to them in his thoughts.”

In author Emori’s view, an emperor who “merely prays” would lack a public persona. Both the crown prince and Emperor Naruhito share the idea that defined their father Emperor Emeritus Akihito’s reign of an active monarch who stands together with the people.

Akishino-no-Miya also delves into the crown prince’s views on the strictures of royal life. Fumihito has publicly chafed at the limitations placed on him since birth. Although he accepts that his status as a member of the imperial family assures his material needs are met, at the expense of Japanese taxpayers, he notes that the arrangement deprives him of the freedoms other people take for granted: “I’m surrounded by attendants at all times. As one might imagine, this can be very constraining. I’m human like everyone else, after all. If you asked 10 people to step into my shoes, I’m certain that every one of them would find it stifling.” Continuing, he says, “Of the few liberties I have, I hold the freedom of thought most dear.”

Emori notes the peculiarity of the crown prince’s situation. Like other hereditary members of the imperial family, nearly every aspect of his life since birth has been determined by his royal status. He points out that scholars of Japanese constitutional law have framed the arrangement as the price of royalty, a tradeoff in which the crown prince and others are “compensated” for the limits placed on their personal freedoms. However, Fumihito questions the humanity of this, arguing that human dignity demands that imperial household members be allowed to exercise their free will as any other person, particularly in crucial matters like abdication.

In the lead up to Emperor Naruhito’s coronation in 2019, the crown prince made headlines with his unprecedented questioning of whether public funds should pay for the Daijōsai, a major ceremony during the enthronement process, given its strong religious nature. Akishino-no-Miya helps clarify the contentious issue. Speaking to reporters in autumn 2018 ahead of his fifty-third birthday, Fumihito revealed that he had expressed reservations about the use of public funds to the grand steward of the Imperial Household Agency, but says the official “turned a deaf ear” to his concerns.

Explaining his statement, the crown prince says he proposed scaling the ceremony back to make it a “small, private affair” that was more in line with imperial resources. He insists that his comments were not directed at the government’s decision to fund the event. Rather, he places the blame squarely at the feet of the IHA. “The Daijōsai is not a public ceremony, but one that concerns the imperial family,” he says. “However, there wasn’t the slightest attempt by the Imperial Household Agency to take this fact into account. That’s what I meant by ‘turned a deaf ear.’ The agency refused to give it any thought.”

Emori suggests Fumihito’s displeasure with the IHA stems from the agency’s blind adherence to precedence and steadfast refusal to debate with the imperial family about the running of its affairs.

The media has ramped up its coverage of the crown prince and his family, particularly during the saga of Princess Mako’s engagement. In the book, Fumihito takes aim at the press, criticizing outlets for taking liberty with the facts. “Conversations are printed and other information presented as if the reporter had gathered all the details first hand. But what is reported is often wildly inaccurate.”

His outrage, though, is tempered by resignation. “My approach is to ignore all but the most egregious falsehoods, as singling out a mistake in one paragraph just gives credence to everything else that is written. Social media only amplifies the problem. I have seen terrible things written, but there is very little I can do about it.”

In Akishino-no-Miya, Emori also touches on the crown prince’s playfulness. “If I were reborn,” Fumihito muses, “I think I might like to come back as a sheep so I could spend all day lazily munching on grass . . . .that seems to me like it would be fun.” The crown prince’s affinity for the animal dates back to when he was in the lower grades of elementary school and kept a sheep as a pet on the grounds of the Akasaka Palace, where he lived.

Emori states in the preface of Akishino-no-Miya that although the crown prince is an often misunderstood figure, the book sets out to clarify the controversies and present Fumihito as a key member of the imperial family, who together with his wife Crown Princess Kiko and the emperor and empress are working to reshape the imperial household for the Reiwa era (2019–). Like so much associated with Fumihito, though, the work has been dogged by controversy since its release in mid-May, including reports that Emperor Naruhito was not informed prior to publication. Such undeserved criticism online has blunted the book’s reception and is doubly unfortunate as it uses the work to propagate a negative image of the crown.