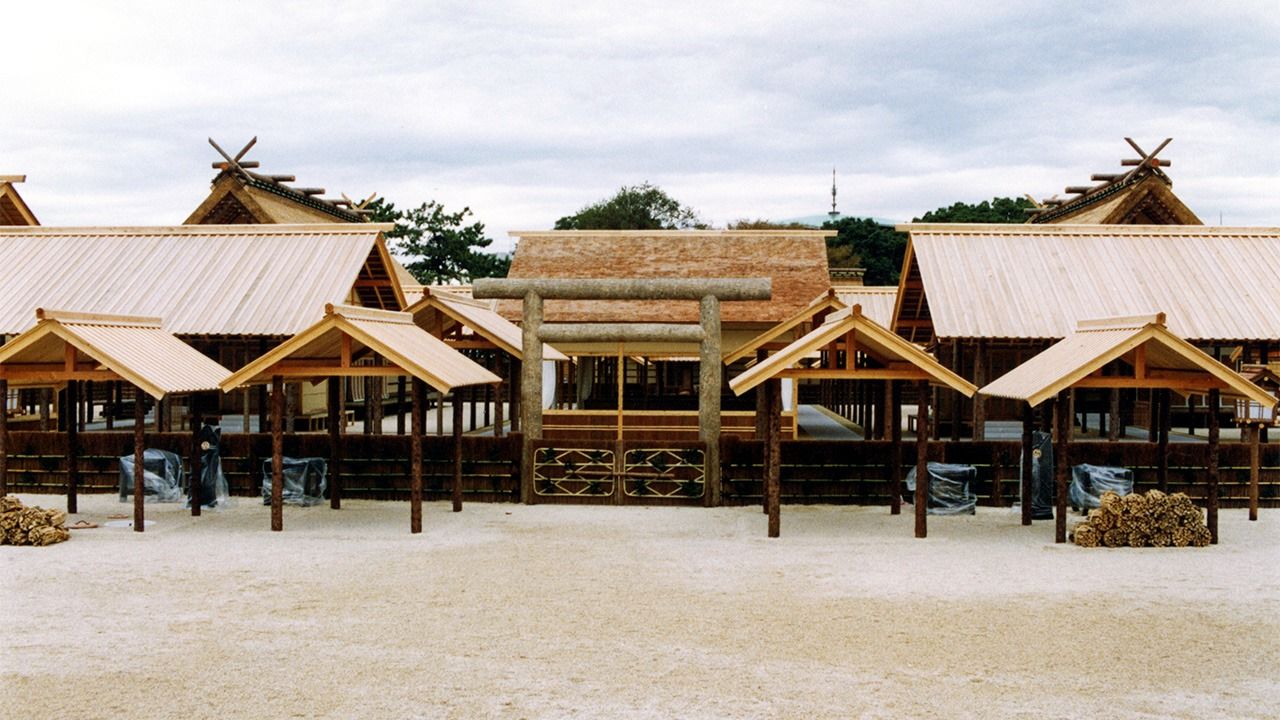 The Daijōsai: Japan’s Harvest Offerings Ceremony at the Start of Reiwa

Society Imperial Family Nov 13, 2019
On November 14, Emperor Naruhito will perform the major ceremony of the Daijōsai to mark the first year of his reign, offering up rice and sake to give thanks for peace and good harvests.

The Daijōsai thanksgiving ceremony for the Reiwa era is set to take place from the evening of November 14, 2019, to dawn of the following day. Each emperor performs this ceremony once at the start of his reign, offering gifts to the gods and expressing gratitude for peace and bountiful harvests.

The first of several related activities took place on May 13, when the harvest locations of the rice to be offered were chosen in a ceremony at the Shinden, one of the Imperial Palace’s three sanctuaries. Behind closed doors, traditional divination was performed through heating thinly sliced turtle shell plates and observing the cracks that formed—records of this kind of divination in Japan go back to 701. As a result, sites were selected in Tochigi Prefecture, representing the east of Japan (Yuki), and Kyoto Prefecture in the west (Suki).

The divination ceremony held at the Imperial Palace on May 13, 2019. (Courtesy Imperial Household Agency; © Jiji)

On September 18, the Imperial Household Agency announced the locations of the chosen paddy fields, in Takanezawa in Tochigi Prefecture and Nantan in Kyoto Prefecture. Ceremonies for harvesting the new rice were held on September 27.

In these ceremonies, the owner and local farmers entered the fields dressed in white to cut the rice with sickles. Some 180 kilograms of white rice and 7.5 kilograms of brown rice of each of the brands Tochigi no Hoshi and Kinu Hikari were sent to the Imperial Palace. They will be used in offerings of new rice and sake, as well as in celebratory banquets. 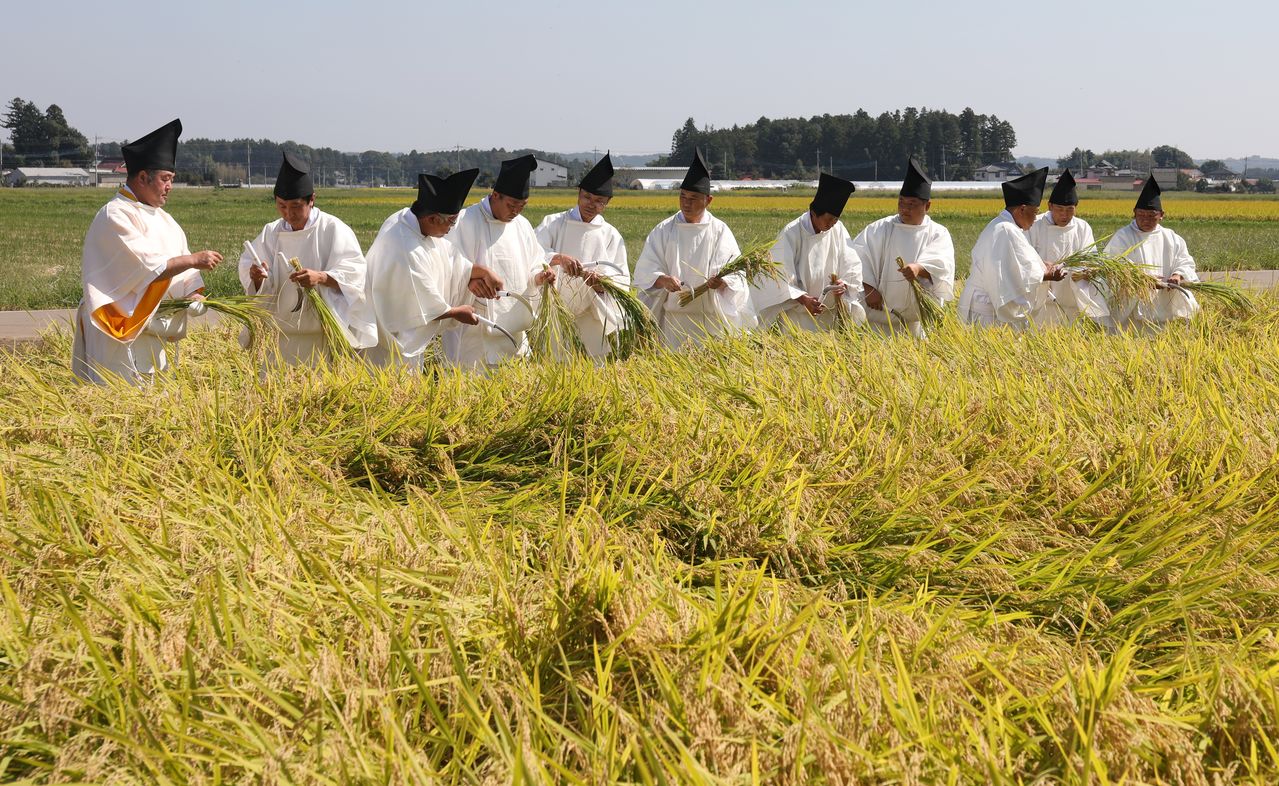 The harvest ceremony is performed in Takanezawa in Tochigi Prefecture on September 27, 2019. (© Jiji) 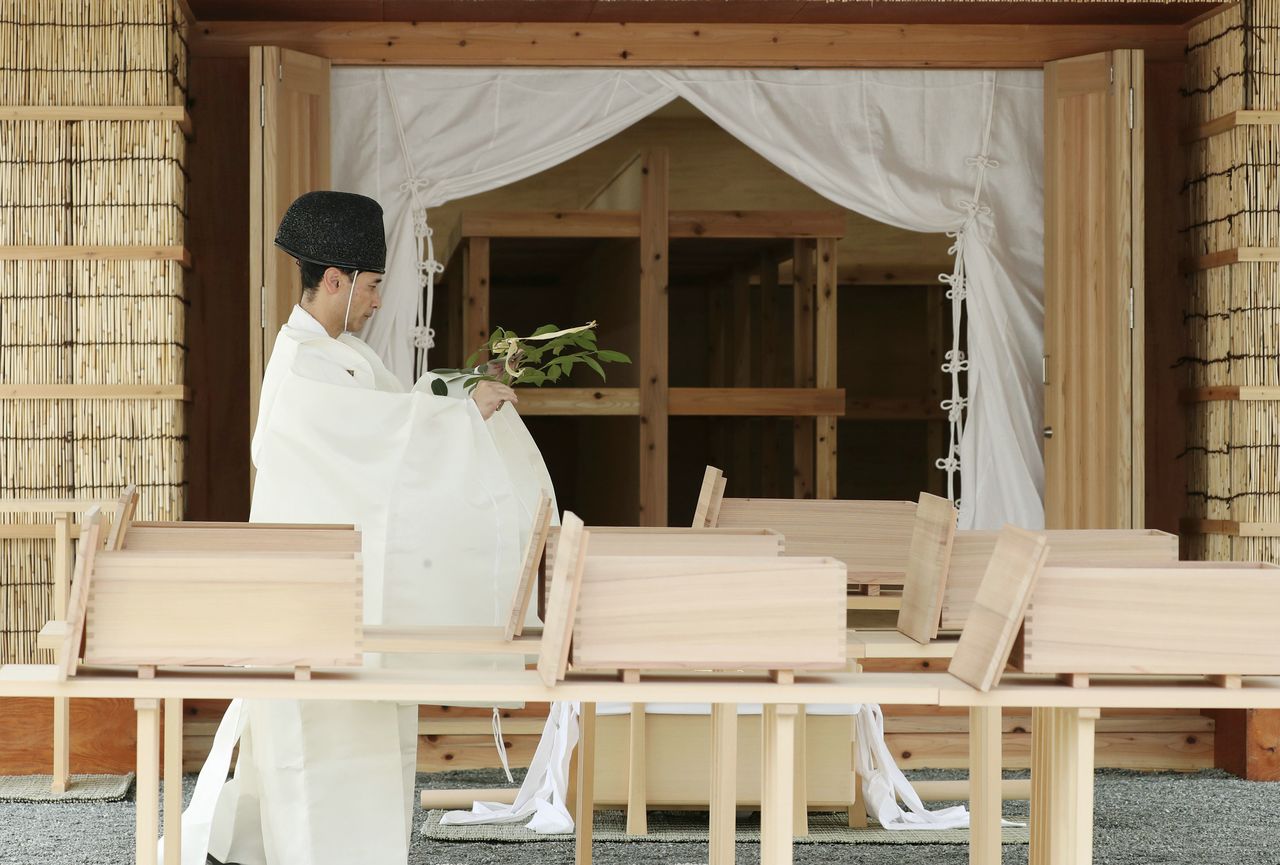 In the central ceremony, Emperor Naruhito will perform two similar rituals from the evening of November 14 in the Daijōkyū, a temporary complex of specially constructed buildings. From half past six, when darkness has fallen, he will enter the Yukiden hall. With no electric lights, it will be dimly illuminated by flickering torches.

Wearing white ceremonial robes, the emperor will sit opposite the shinza, or divine seat of Amaterasu, the sun goddess said to be ancestor to the imperial line. He will then successively offer up the rice from Yuki (east Japan), abalone and other cooked food, and white and black sake—the latter being colored with black sesame seeds. He will read a prayer giving thanks for peace and good harvests, and then partake of the offerings.

Empress Masako will wear a white, many-layered jūnihitoe robe as she bows at a nearby hall. Crown Prince Fumihito and Crown Princess Kiko and other members of the imperial family will also attend in traditional clothing.

When the first ceremony finishes after around three hours, Emperor Naruhito will rest. Then around a half-hour past midnight on October 15, he will perform the same ritual with the rice from Suki (west Japan) in the Sukiden hall. 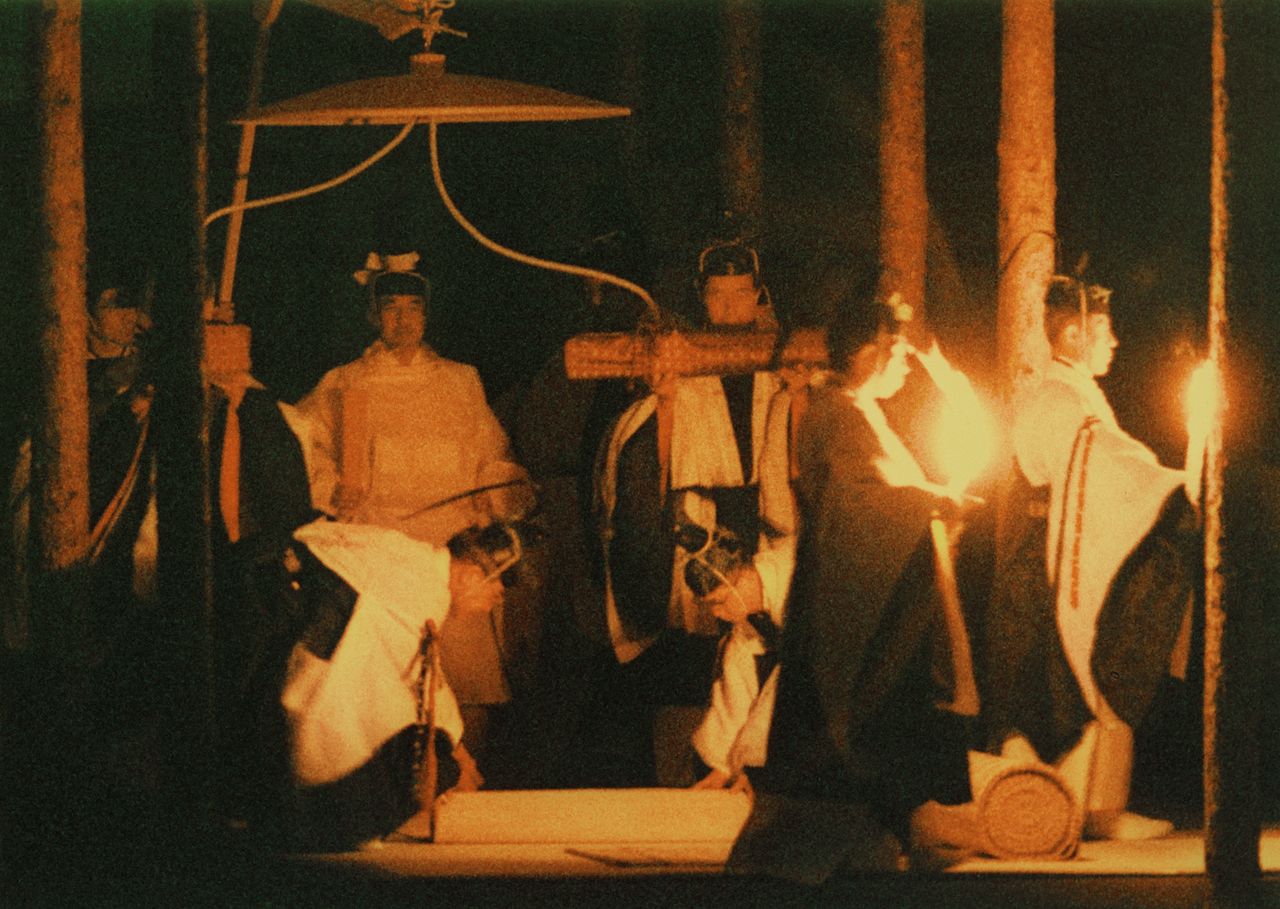 At the Heisei Daijōsai on November 22, 1990, Emperor Akihito proceeds to the Yukiden. (© Jiji) 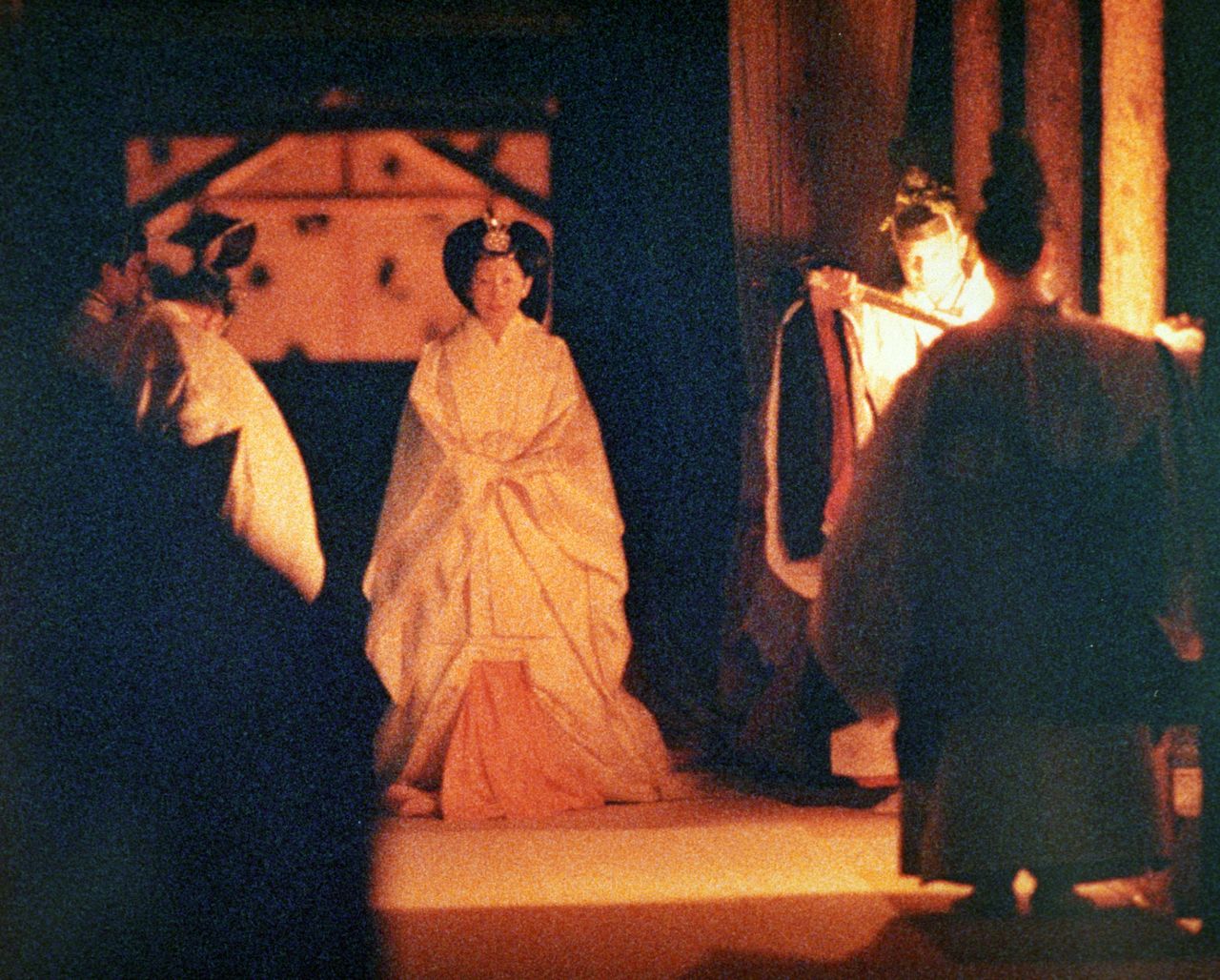 Prime Minister Abe Shinzō and other representatives of the different branches of government will be among the 670 guests—this is 230 fewer than on the previous occasion on November 22, 1990. They will sit in the Daijōkyū, but as it will be dark, they will barely be able to see the emperor performing the rituals.

The ceremony is said to date back to the reign of Emperor Tenmu, which lasted from 673 until 686. Yet the secrecy surrounding what takes place has led to such rumors as that the emperor sleeps with Amaterasu in a room marked as a “sleeping sanctum.” Before the 1990 ceremony, the IHA categorically denied that this is how the emperor gains his divine status, saying that it is a symbolic resting place for the deity, has no bedding, and the emperor never enters it.

There is currently no legislation relating to the Daijōsai. Although included in the prewar Imperial House Law, it was removed in the current version established after World War II. Accordingly, the government did not treat it as a state ceremony in 1990, based on the separation of religion and state under the Constitution. 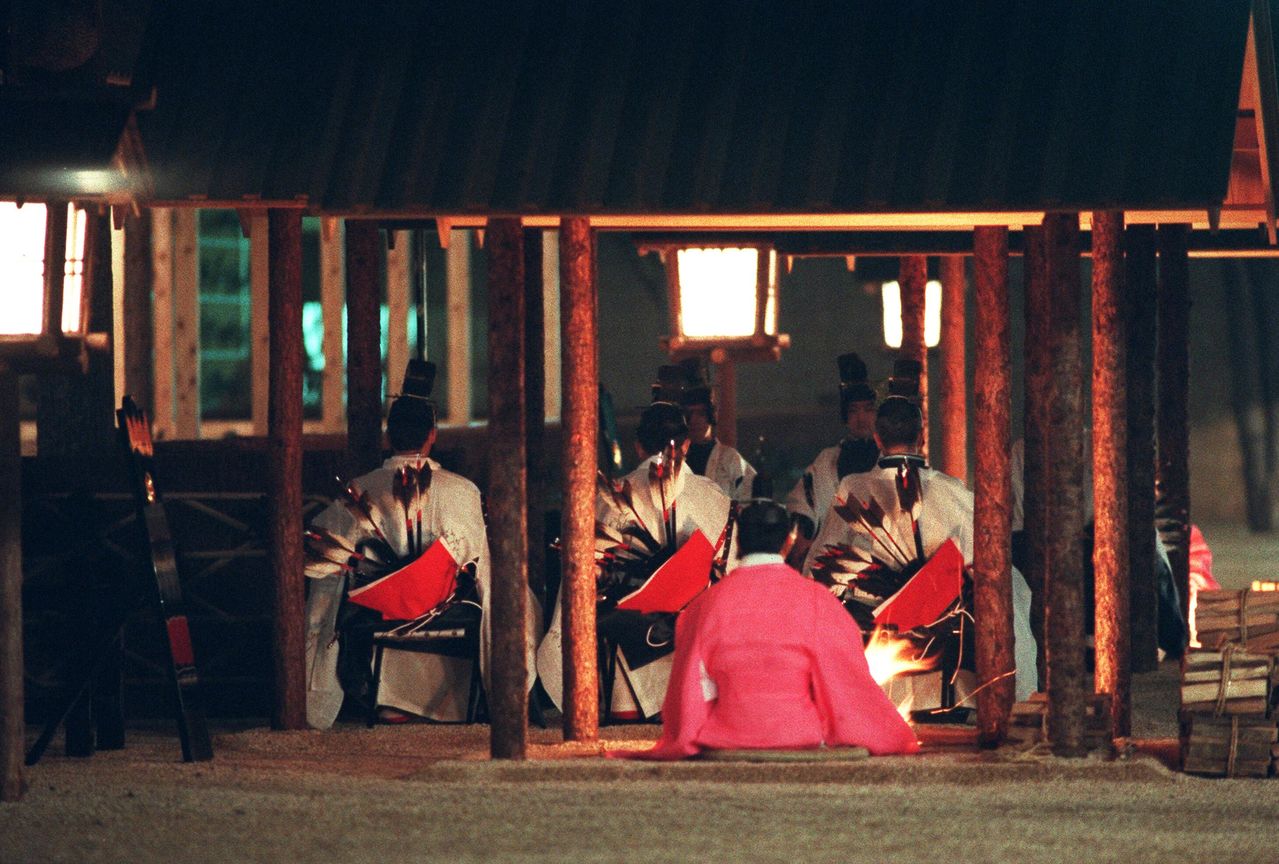 An attendant lights fires at the Sukiden during the 1990 ceremony. (© Jiji) 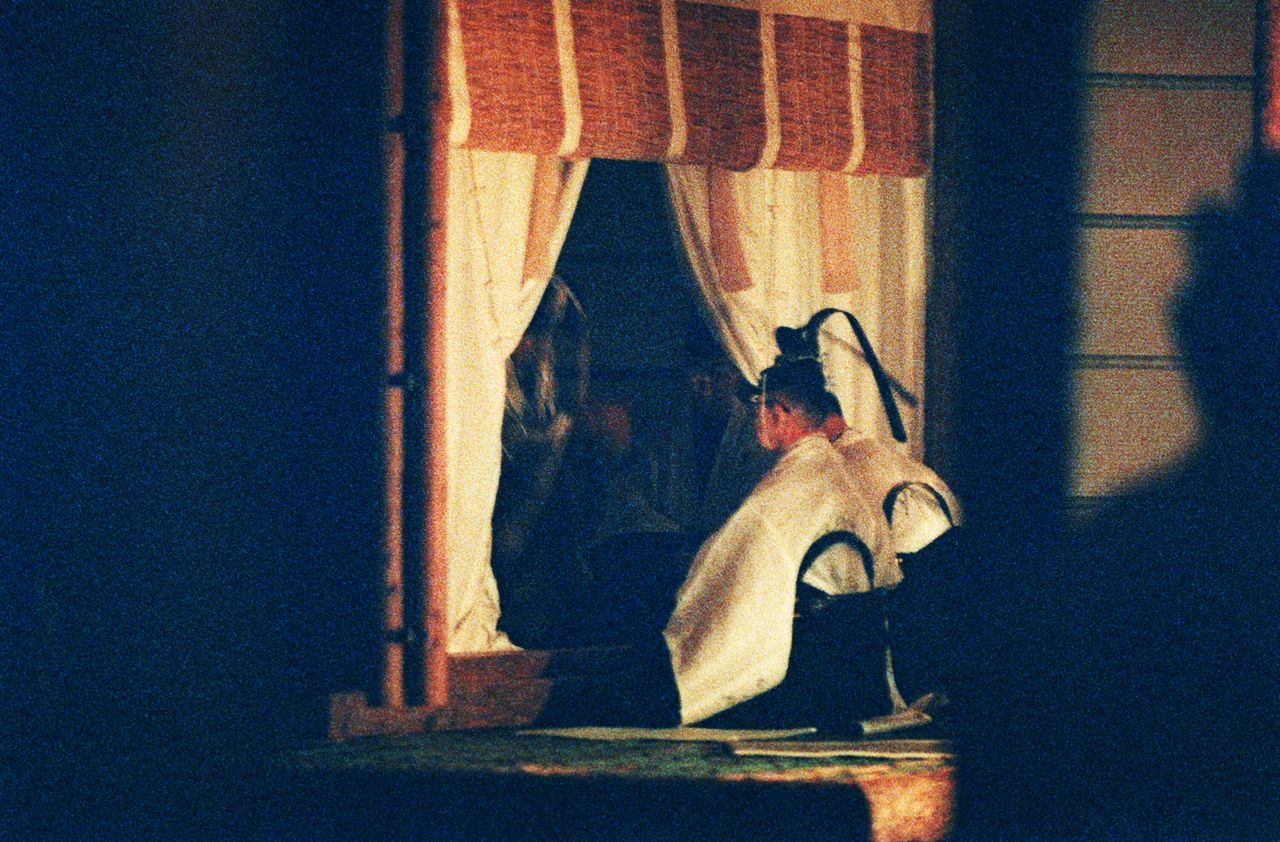 Emperor Akihito enters the Sukiden at the 1990 ceremony. (© Jiji)

Dissent in the Imperial Family

This time, however, the government has decided that the ceremony is fully public in nature, as the imperial succession itself is laid down in the Constitution and also because, despite the ceremony’s religious character, it dates back to the seventh century as part of the succession rites.

Last autumn, Crown Prince Fumihito stated at a press conference that it should be a private ceremony, and that it had always had to be scaled to match imperial resources. He submitted a cost-cutting plan to the IHA in which the Daijōsai would be held in the Shinkaden hall—which is used for the corresponding Niinamesai festival held at the same time each year from the second autumn of the new imperial era onward—rather than constructing a one-off temporary facility.

The IHA did make reductions of around 20% by using some prefabricated parts and making wood shingle roofs for the Yukiden and Sukiden instead of thatching them. Even so, construction costs amounted to ¥957 million.

The Daijōkyū was originally a simple structure used for one night in the ceremony and then dismantled. Yet the postwar versions differ little from those used under the former prewar Constitution, when the emperor was considered to be divine, requiring expenditure of huge sums of money. At the same time, the ceremony is little understood by the public, and many of the guests invited in 1990 went home before it was finished. 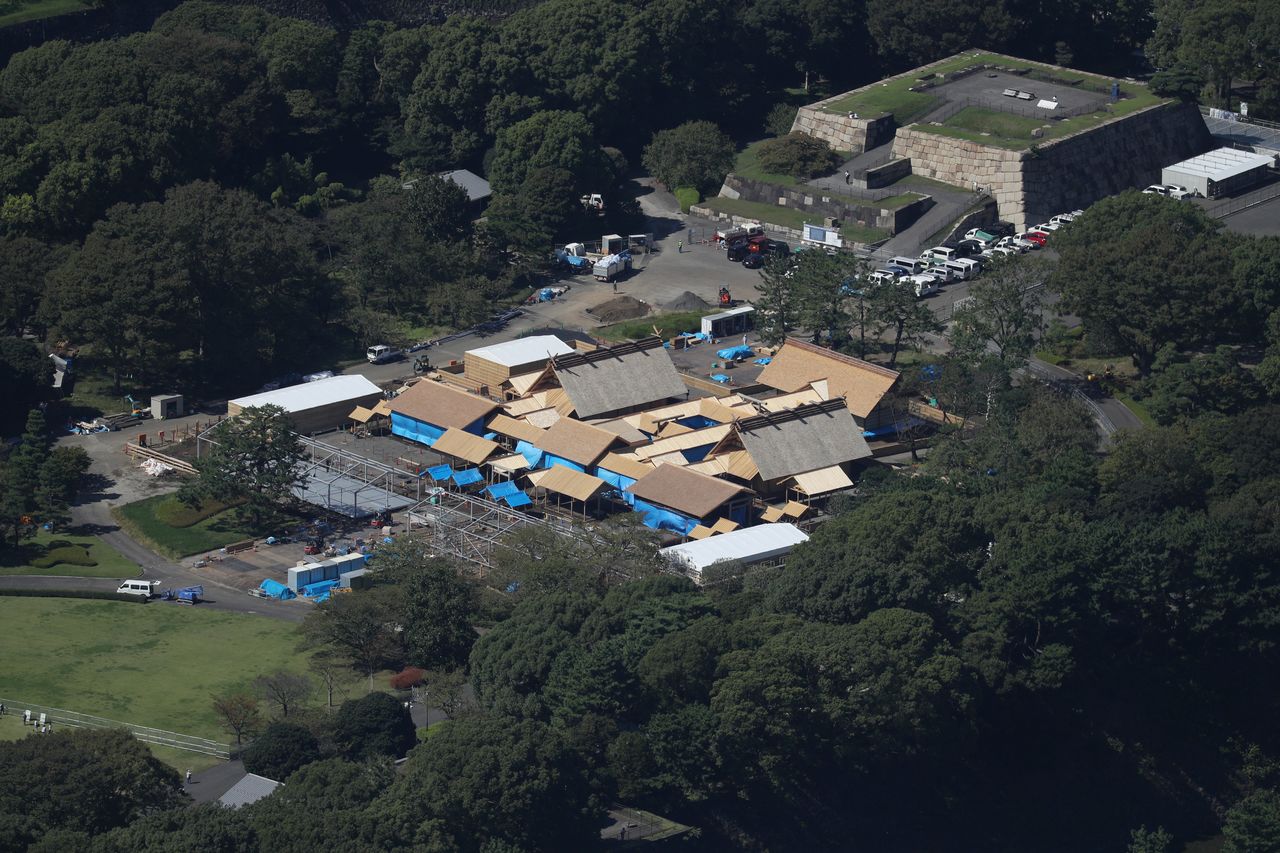 The Daijōkyū built at the center of the former Edo Castle in the Imperial Palace, pictured from the air on October 9, 2019. (© Jiji)

On November 16 and 18, guests will attend celebratory banquets at the Imperial Palace. They will eat dishes and sake based around the new rice together with the imperial couple and other members of the imperial family, while enjoying performances of traditional song and dance.

From November 21 to December 8, the Daijōkyū will be open to the general public from nine in the morning until three in the afternoon. Visitors should enter from the Sakashita Gate, accessible to the west of Tokyo Station.

(Originally written in Japanese. Banner photo: The Daijōkyū built at the Imperial Palace for the Heisei ceremony, with the Sukiden on the left and the Yukiden on the right. Pictured on November 21, 1990. © Mainichi Shimbun/Aflo.)