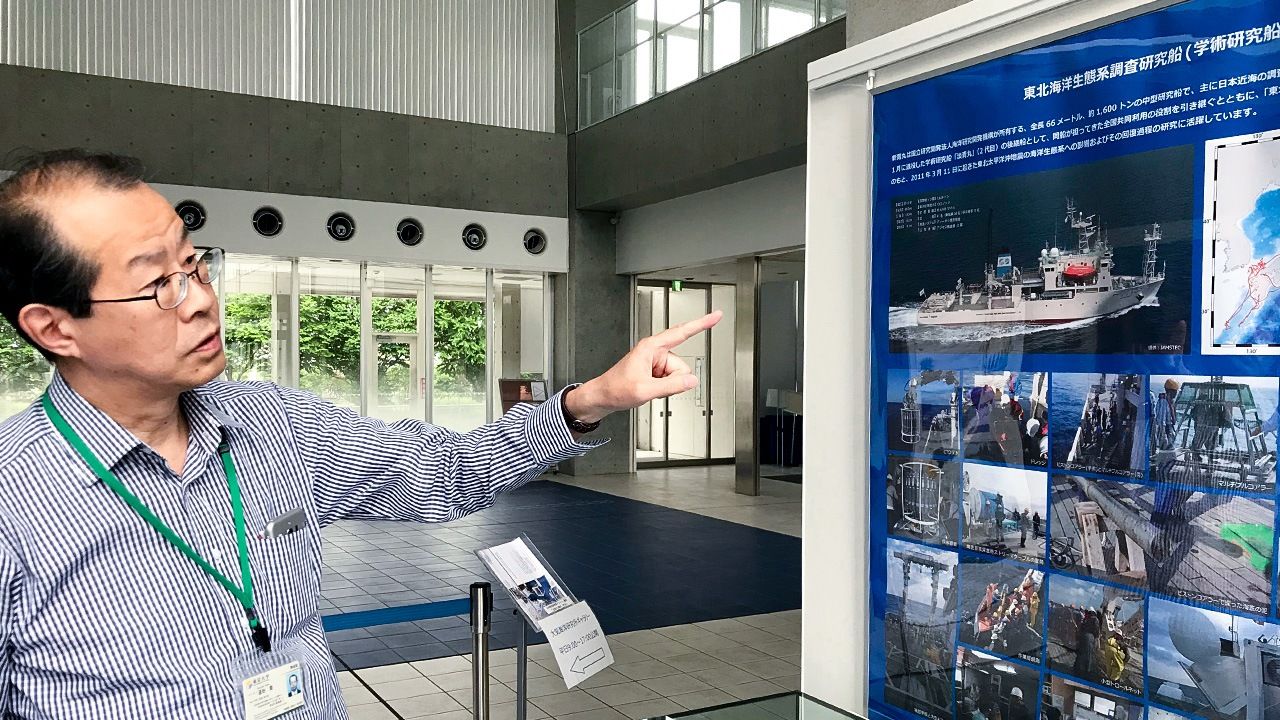 Society Environment Sep 24, 2019
University of Tokyo oceanographer Michida Yutaka talks about an integrated research project he heads that is studying the scope and effects of marine microplastic.

Reports of plastic waste fouling pristine waters or harming sea animals have helped to raise public awareness of the severe impact human consumer habits have on marine environments. At the G20 summit in Osaka, held in June 2019, world leaders took a promising step toward protecting the oceans from trash by committing to the bold goal of fully halting the leakage of plastic refuse into the seas by 2050.

Scientists are slowly making headway in understanding the scale of the marine plastic waste problem, but work on aspects like microplastics is just getting underway. Studies have found that these superfine pieces of plastic refuse, some smaller than 1 millimeter across, form when ultraviolet radiation and waves break down larger pieces of plastic. However, researchers have yet to fully identify the mechanisms by which microplastics disperse in the ocean, not to mention the impact of the tiny particles on marine life and humans.

The University of Tokyo recently embarked on a three-year project with the Nippon Foundation that brings together specialists from a wide range of fields with the aim of bolstering scientific knowledge of marine microplastics and providing advice for addressing the problem. Faculty from the Tokyo University of Agriculture and Technology and Kyoto University are part of the program team, which includes some 50 experts in such diverse disciplines as agriculture, engineering, environmental studies, law, political science, and oceanography. I recently sat down with the project’s coordinator—Professor Michida Yutaka, who heads the Center for International Collaboration at the University of Tokyo Atmosphere and Ocean Research Institute—to talk about the challenges and expectations of the program.

INTERVIEWER  In 2016, the World Economic Forum made the startling prediction that by 2040 there would be as much plastic garbage in the ocean as sea life. How concerned should we be? 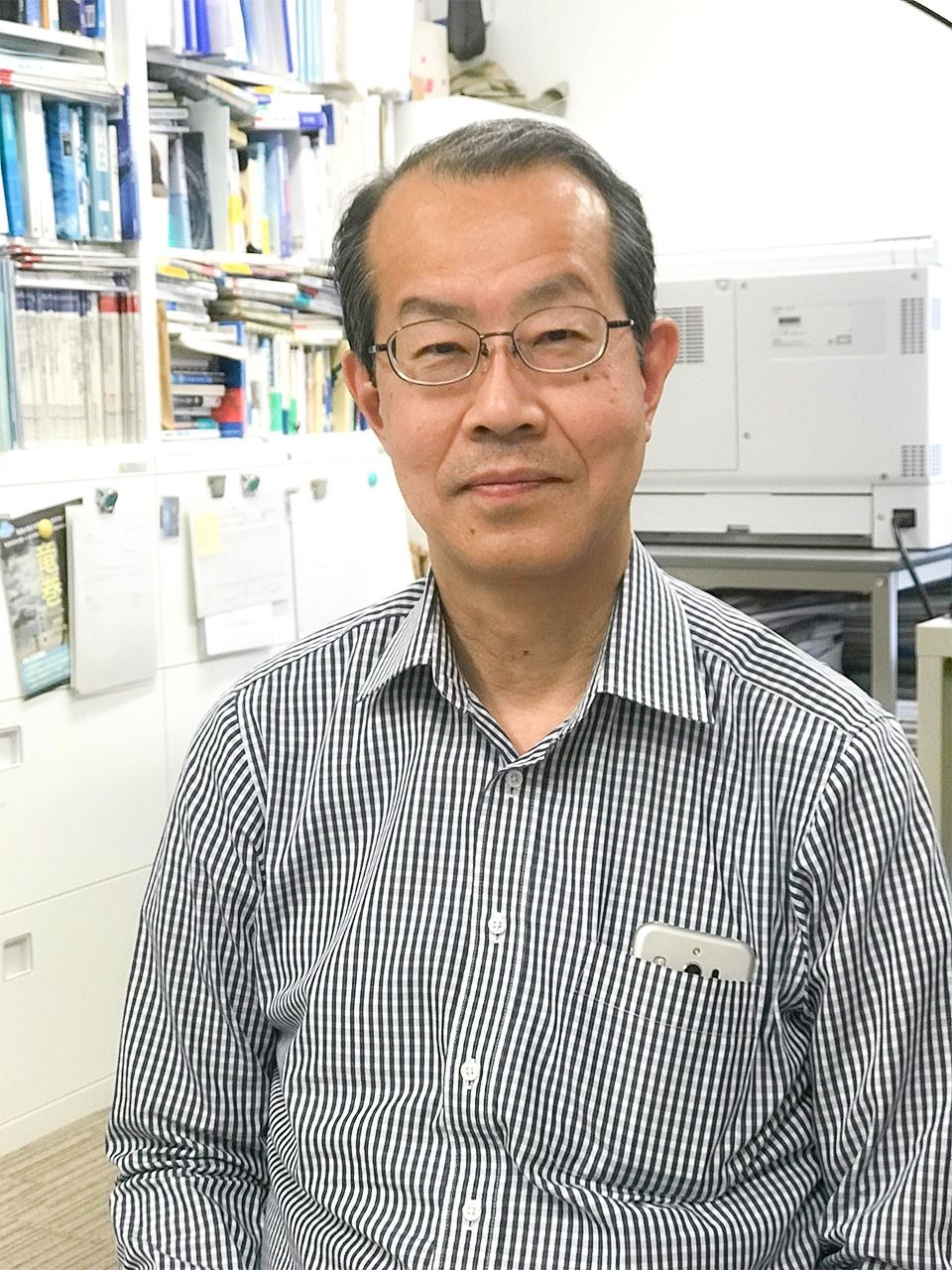 Professor Michida Yutaka of the University of Tokyo Atmosphere and Ocean Research Institute.

MICHIDA YUTAKA  The report was certainly an eye opener, but it’s hard to get a true sense of what it actually means. People may observe schools of fish swimming in the water, but it’s nearly impossible to extrapolate from this the vast amount of sea life that exists in the oceans.

The only way to fully grasp the seriousness of the predicament we’re in is by studying if and how marine plastics impact ocean resources. Researchers have only started looking into the issue.

The durability of plastics makes understanding their effects especially challenging. Exposed to sunlight and seawater, plastic polymers break into smaller pieces, but it can take centuries for a drink bottle or shopping bag to degrade completely. This is well beyond the human lifespan and makes it difficult to ascertain the long-term impact on the marine environment.

INTERVIEWER  Microplastics are now a buzzword, but the particles are little understood. Why is this?

MICHIDA  Scientists around the world are busy studying microplastic, including how the particles disperse through the water and their effects on the marine ecosystem and human health. But researching such small pieces of refuse in the vastness of the seas is not an easy undertaking. It will be some time yet until we have a definitive paper on the problem.

INTERVIEWER  What is your research team focusing on?

MICHIDA  We hope to identify the scope of microplastic debris in the ocean and the effect on living organisms. In particular, we want to determine how microplastics form and disperse through the water. We know that seawater and UV rays will degrade a single shopping bag into tens of thousands of small particles. Due to this, it’s easy to assume that a bucket of seawater scooped from the sea contains far more microplastics than larger bits plastic waste. However, we don’t yet have the data to prove this.

It may turn out, though, that we find only small quantities of microplastics. In that case, we will need to determine why. The three most plausible explanations would be that microplastics adhere to marine snow—material like the remnants of decaying organisms and fecal matter—and sink to the seafloor, that they are ingested by organisms, or that they dissolve in seawater. The latter hypothesis is the least likely of the three, since plastics are petroleum based and unlikely to gradually dissolve in saltwater the way calcium-carbonate mollusk shells do.

My colleague Professor Tsuda Atsushi at the University of Tokyo’s Atmosphere and Ocean Research Institute is heading the study on the ways that microplastics disperse through the ocean. Working in Sagami Bay and the open ocean near Tsushima, his team will take water samples from the surface and middle depths as well as collect sediment from the seafloor. Researchers in a cleanroom will then use an infrared microscope to determine the components of the specimens. 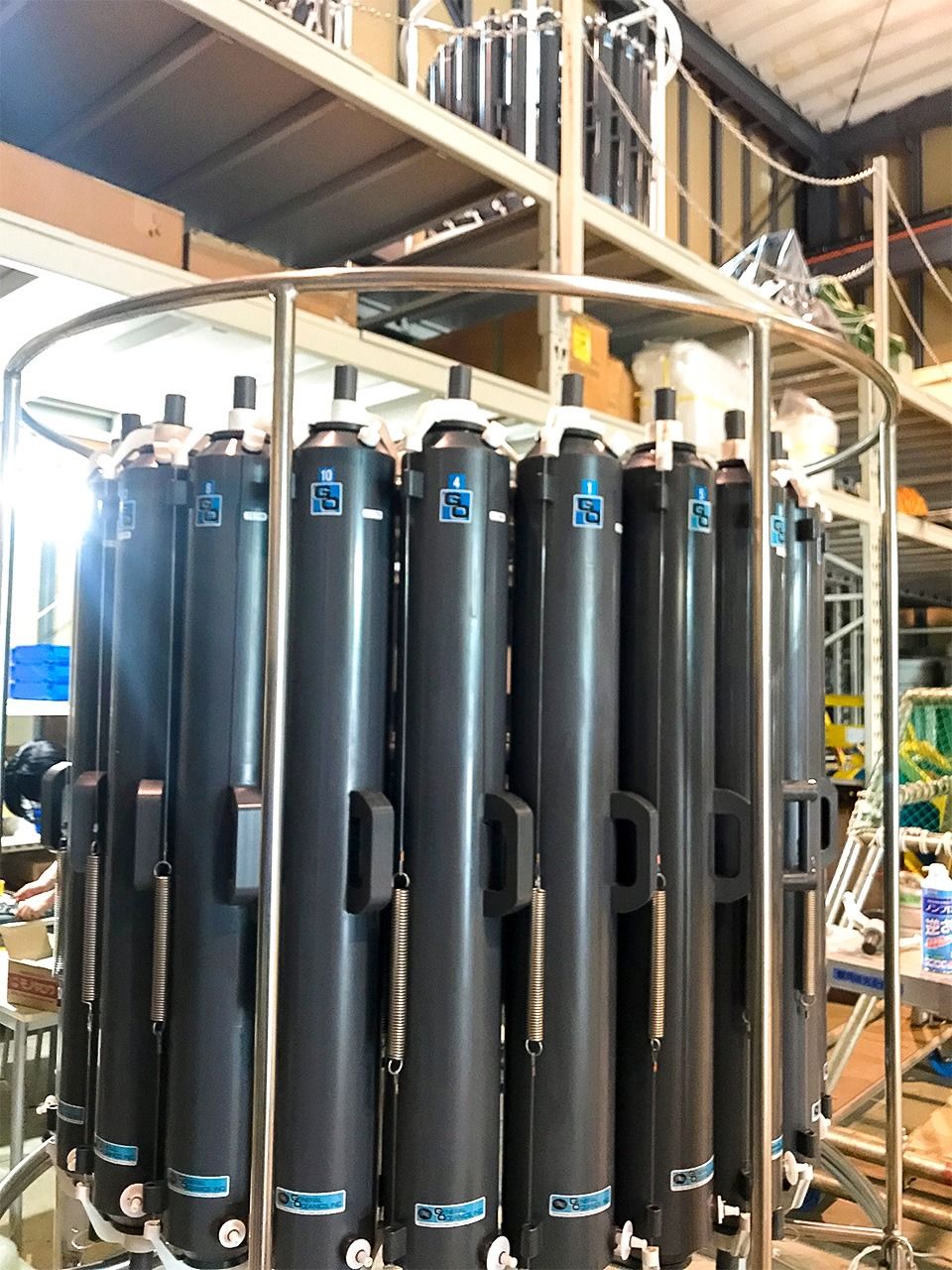 Tubes for collecting seawater samples. Scientists aboard a research vessel open and close the containers by remote control.

The project aims to learn more about the vertical distribution of particles and determine how much accumulates at the bottom of the ocean. Microplastics basically have neutral buoyancy and drift through the water. However, it’s possible that small grains will adhere to other objects and fall to the seafloor. Research will include setting up a net at middle depths to catch microplastics falling from the surface. The knowledge we gain will move us closer to grasping the scale of the problem. 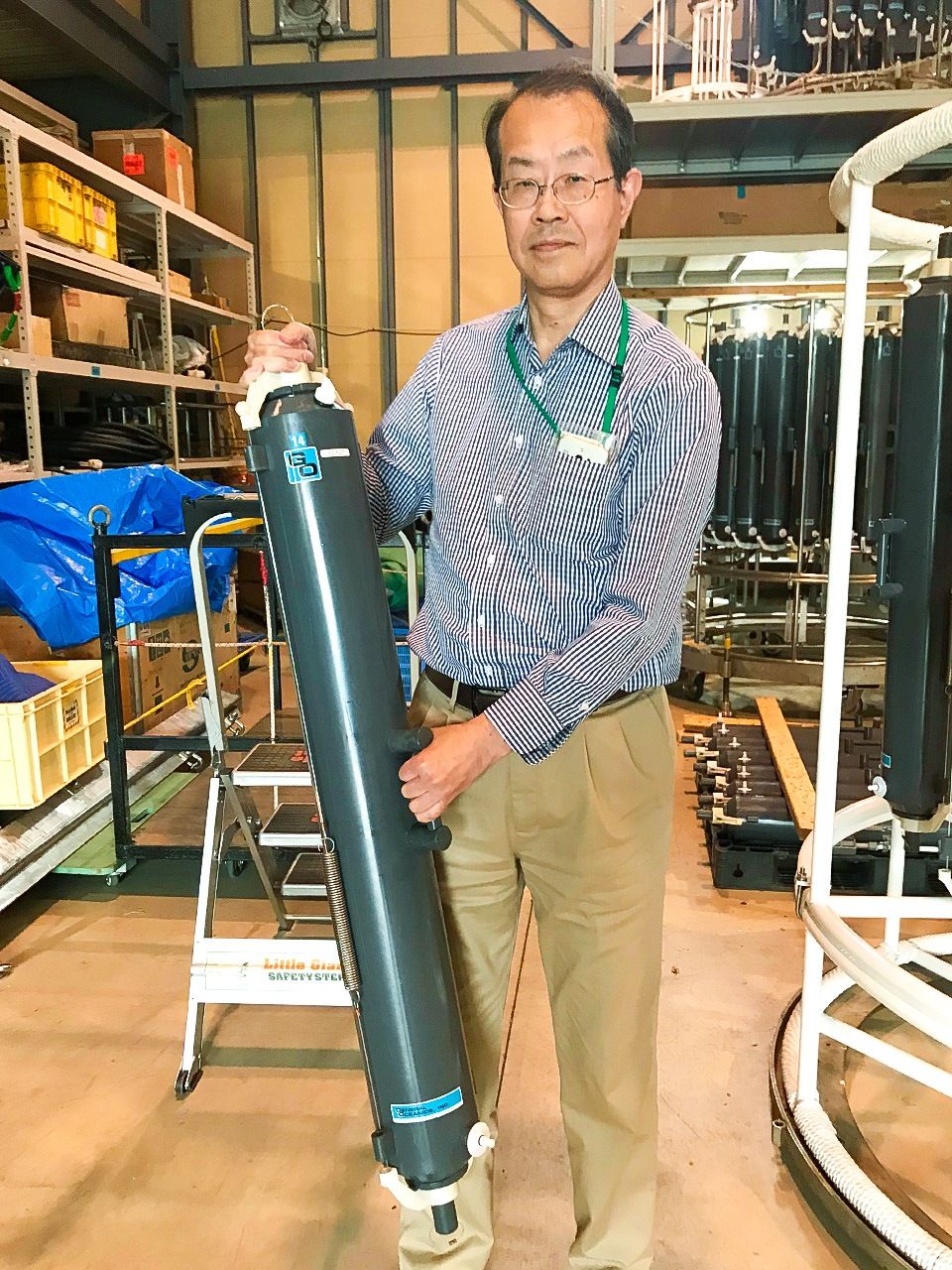 INTERVIEWER  What about the possible effects on human health?

MICHIDA  It’s not known whether microplastics are physically harmful if ingested. Professor Sakai Yasuyuki of the University of Tokyo’s Department of Chemical System Engineering is overseeing a study on the cellular uptake of microplastics to determine if particles have an effect on the immune system.

Using intestinal cells, his team will first determine if microplastics are able to penetrate the cell walls. The hypothesis is that if the particles trigger an immune response, this will imply that the human body reacts to microplastics as an invasive substance. However, if there’s no response, or if the cells simply excrete the particles, we can say that microplastics have no direct effect on the human immune system.

INTERVIEWER  How do you anticipate the results of the project will be used to address the marine plastics problem?

MICHIDA  Plastic has properties that make it perfect for use as packaging. However, as in the case of medical items, much of what is produced is discarded after one use. Experts now urge people to observe the three Rs—reduce, reuse, and recycle—as a way to curb the growing amount of plastic waste. Of the three, I think the time has come for society to seriously consider measures to reduce: to limit our reliance on plastic.

Our project team also includes legal and political science specialists who will consider policies and strategies for reducing plastic waste and managing it in a way that prevents it from reaching the ocean. As an example, their expertise may help in determining criteria for creating specific systems or legal frameworks.

We’re confident that by retaining a neutral position as researchers, and by including a broad spectrum of opinions that includes industry voices, we can reach a consensus on how best to reduce plastic consumption.

INTERVIEWER  Why is it so important to include specialists from so many fields?

MICHIDA  Well, scientists tend to focus on their own specialty. My oceanographic field is sea currents, for example. Since becoming a scientist I’ve conducted multiple research voyages each year, including during a stint in my twenties as a specialist in the Japan Coast Guard and as part of team in Antarctica when I was 28. In the late 1980s, it was common to see pieces of driftwood floating unusually far out at sea. By the early 2000s, though, these sightings were often replaced by large pieces of polystyrene instead.

Other specialists will have their own takes on the issue of plastics in the ocean. We’re aiming to fulfill our project objectives by taking a balanced approach that brings together the research results of all our different fields of expertise. Although we’ve only begun to scratch the surface concerning microplastics, society must start taking action to deal with marine waste immediately. I hope the project succeeds in providing effective ways to address the problem.

(Originally published in Japanese. Banner photo: Professor Michida Yutaka of the University of Tokyo’s Atmosphere and Ocean Research Institute explains a panel detailing a research voyage in the waters of northeast Japan. All photos by the author.)