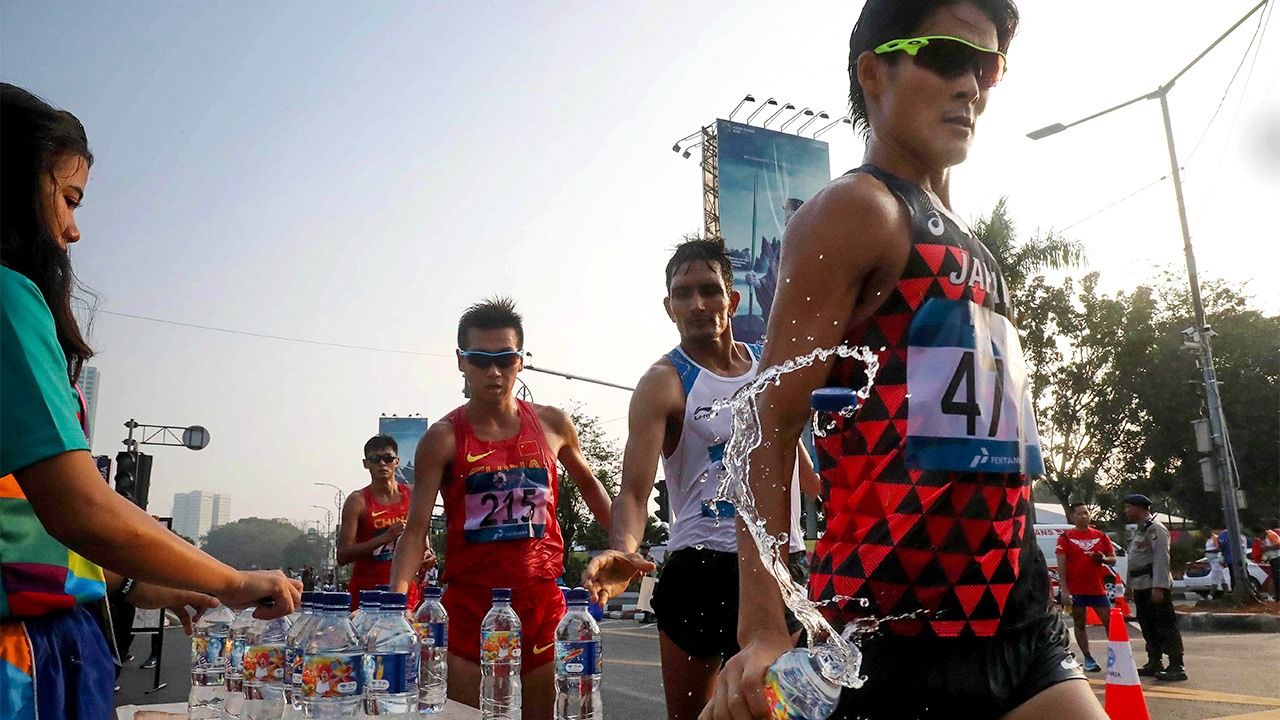 Counting Down to the 2020 Olympics and Paralympics

Tokyo’s Sizzling Summers Have Olympic Planners Preparing for the Worst

Society Sports Tokyo 2020 Jul 17, 2019
After a scorching summer heatwave in 2018, planners of the Tokyo Olympics and Paralympics are implementing measures to protect athletes, staff, and spectators at outdoor events from extreme temperatures during the 2020 Games.

Hot weather is not a new issue at the Summer Olympics. At the 1912 games in Stockholm—the first in which Japan participated— temperatures were a sweltering 32 degrees Celsius in the shade when the marathon got underway in the afternoon. Of the 68 athletes participating, half failed to complete the race, including Japanese runner Kanakuri Shisō who collapsed from the heat. Portuguese runner Francisco Lázaro also collapsed and was taken to a hospital, where he died the next day, becoming the first athlete fatality in an Olympic event.

More than a century later, experts warn that daytime temperatures in Tokyo may climb even higher during the 2020 Olympics and that the metropolis may see a repeat of the heatwave that baked the capital in 2018. Fearing the worst, the organizing committee for the games set the starting times for many long-distance track and field events in the early morning to avoid the scorching heat. Officials initially scheduled the men’s and women’s marathons for 7:00 am but moved the time up an hour to 6:00 am. Likewise, they shifted the start of the men’s 50 km race ahead 30 minutes to 5:30 am and rescheduled both the men’s and women’s 20 km walks an hour earlier to 6:00 am. 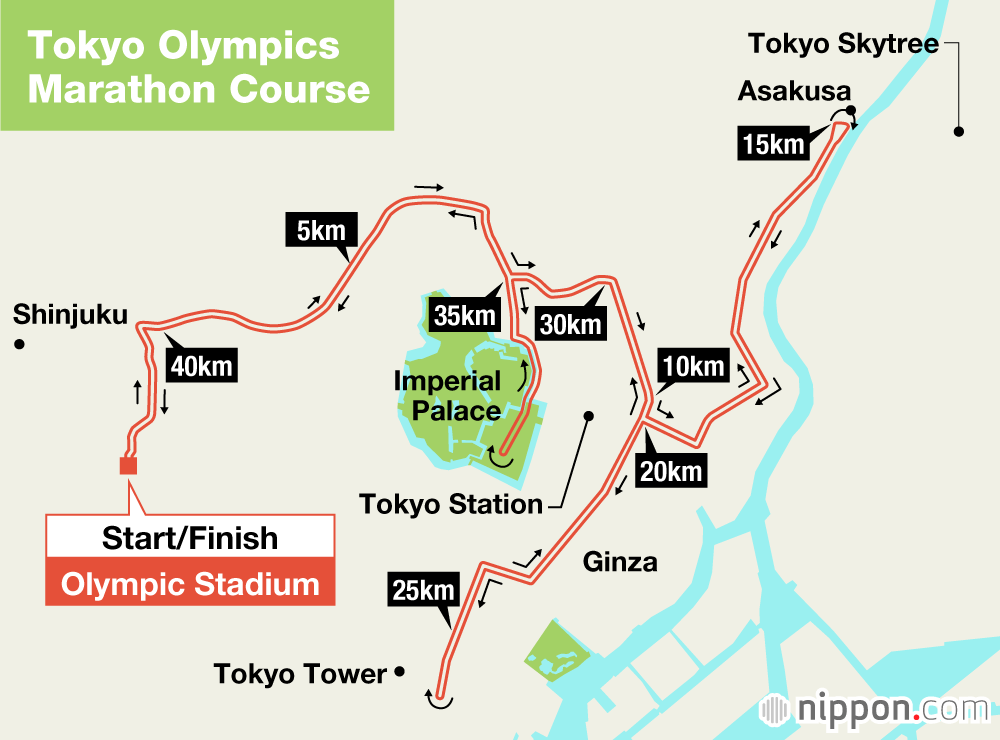 We asked Asada Katsuo of Weathernews, a weather forecast company working with the Olympic organizing committee, about the possible effects the early starts will have on races.

Going off data collected over the last decade, Asada says that the temperature will likely be around 27 degrees Celsius at 6 am when the marathons get underway. “The Tokyo metropolitan area’s average summer temperature is thirty degrees and daytime highs are around thirty-three, so shifting start times ahead an hour means it will be cooler.” However, he warns that the early morning hours will be more humid as temperature and humidity occur in inverse proportion to each other. “The temperature will be almost a full degree lower, but humidity will be as much as four percent higher.”

Asada states that temperature, humidity, and direct sunlight are all factors in heatstroke. “The primary merit of an earlier start is reducing direct exposure to the sun. However, athletes who find it hard to cope with humidity will still be at a disadvantage.”

There is also the issue of race preparation. “Most athletes hit their peak in the afternoon,” explains Asada. “However, with an early morning start they will have to do this seven to eight hours earlier than usual.” He notes that this may advantage athletes traveling multiple time zones to reach Japan as their internal clocks will still be behind local time. Runners based more closely, on the other hand, will need to adjust their circadian rhythms on top of taking precautions against the heat.

In and Out of the Shade

Asada and his colleagues at Weathernews provided detailed meteorological information to the Japanese track and field team during the 2018 Asia Games in Jakarta, Indonesia. Asada says the August temperatures and humidity in the city were very close to what is expected at the Tokyo games, adding that “we treated the event as a warmup for the Olympics.”

A crew from the company followed Japanese athletes along race courses, measuring the temperature and other information and providing the data to team staff. Asada says that although the average temperature in Jakarta at the time was around 30 degrees, conditions could heat up unexpectedly, as they did during the 50 kilometer walk. “The race got underway at six in the morning when the temperature was cooler,” he explains. “We didn’t anticipate it would get too hot, but by the time the athletes were approaching the finish line the mercury was hovering around thirty-three degrees and a number of competitors had already dropped out.” 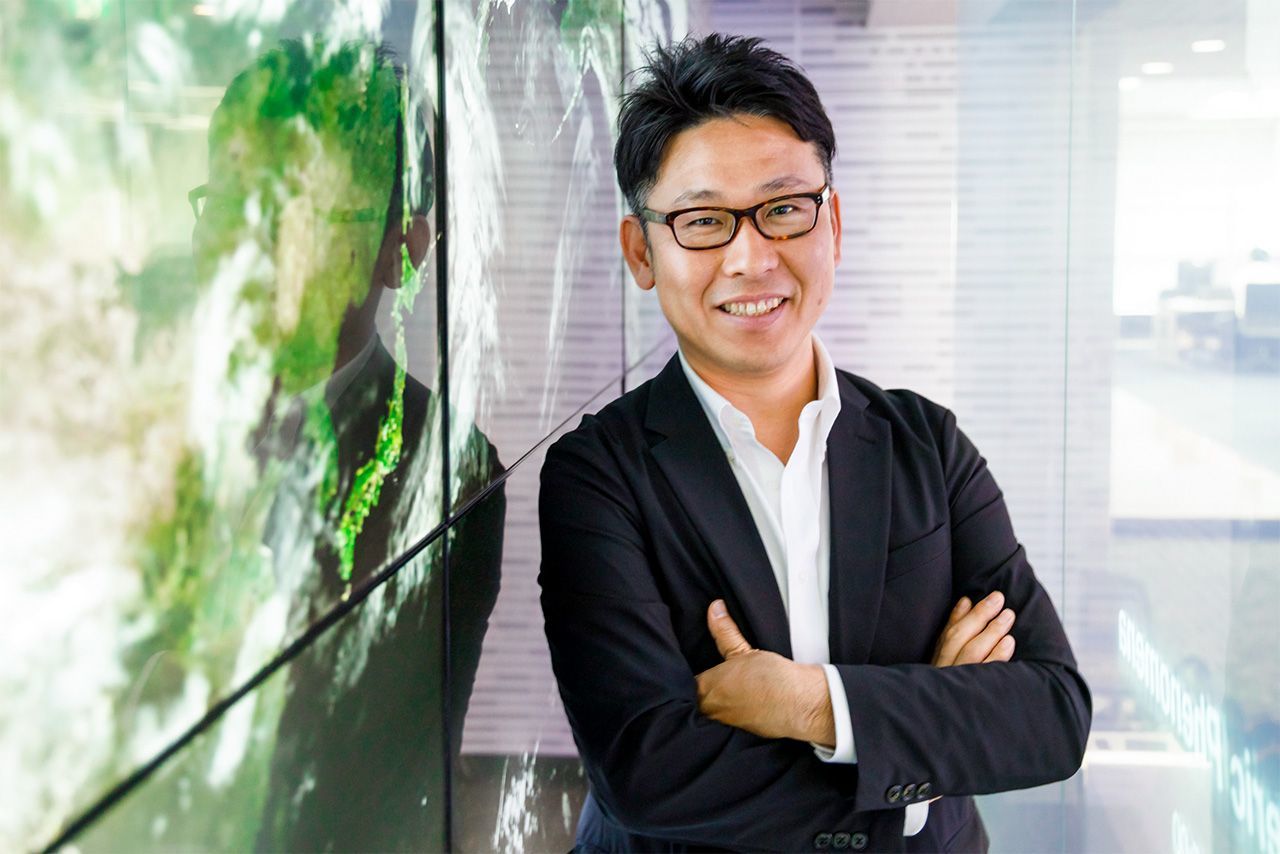 Asada and his crew also took photos and videos of courses prior to events to help the Japanese team plan their race strategy, and he says they will do the same for the marathon route at the Tokyo Olympics.

“The course runs along public roads and athletes won’t be able to make trial runs because of the car traffic,” he explains. “We will use the data we collect to create a map that will include shaded areas and stretches where runners will be exposed to direct sunlight.

A survey taken on the hottest day in Tokyo last year showed a temperature of 31.7 degrees and humidity of 70% at the starting point for the Olympic marathon. But by the 35-kilometer marker, the temperature had risen to 36 degrees and the humidity had dropped to 50%. Asada notes that there was a temperature difference of around two degrees between shady areas and sections exposed to direct sunlight, illustrating the obviously need for athletes to run in the shade as much as possible.

Heatstroke is a major risk during races in hot, humid conditions such as are expected in Tokyo. Asada also checked the Olympic marathon route using the Wet Bulb Globe Temperature, a heat stress index that combines data like temperature, humidity, sunlight, and heat radiation. The likelihood of heatstroke increases sharply when the WBGT hits 28 degrees Celsius, and Asada found that by 7:25 am, Tokyo was already in the danger zone. “The WBGT was at twenty-eight degrees from the eight-kilometer mark all the way to the finish line. The only exceptions were areas shaded by buildings.” 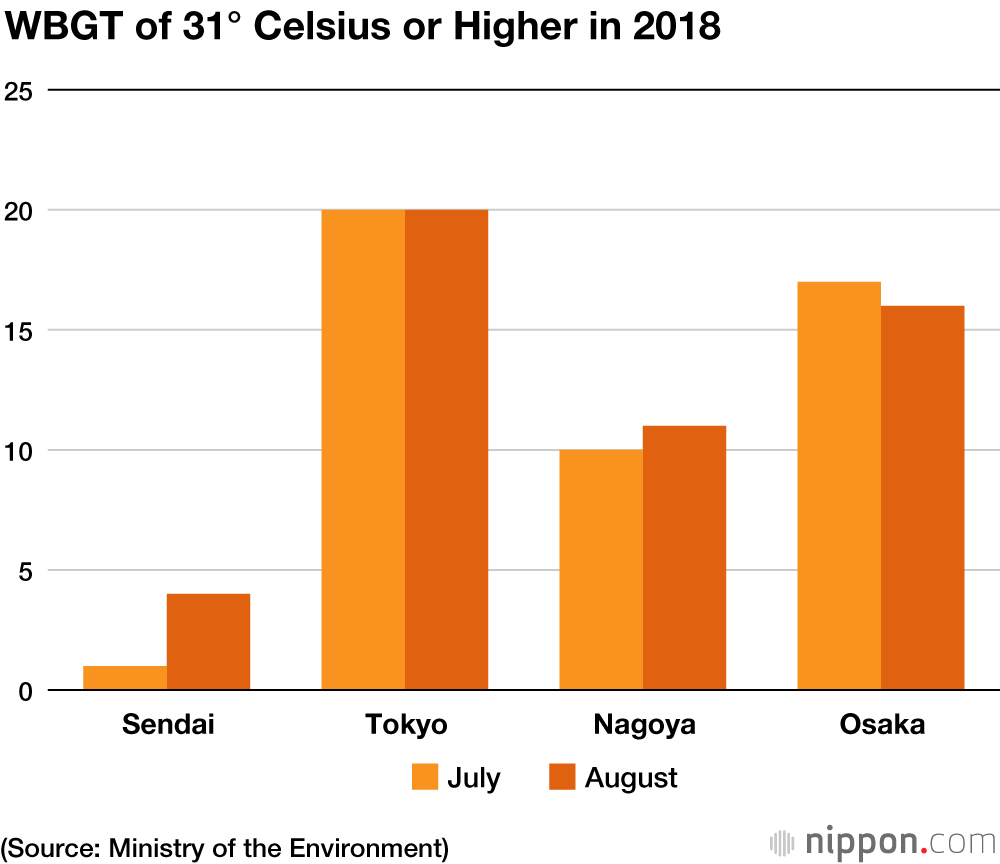 Typhoons and sudden heavy downpours are another concern at the Tokyo Olympics and Paralympics. Two typhoons lashed Japan in August 2018, although neither hit Tokyo directly. However, on September 30, Typhoon Trami’s imminent landfall prompted East Japan Railway to suspend operations of its train lines in the Tokyo metropolitan area from 8 pm. Although storm damage was relatively light, including some downed trees and structural damage to buildings, service delays continued into the following morning, severely affecting commuters.

Despite this, Asada insists that the risk typhoons pose to the games is relatively small. “A storm’s course is fairly easy to predict,” he explains. “Some will linger over an area, but on average a typhoon will blow through in around six hours. We are confident we can predict the extent that a storm will disrupt Olympic events, and hopefully this information will help the athletes as they prepare to compete.”

Torrential rain poses a slightly different challenge. Weathernews recorded fewer severe rainstorms in Japan in 2018 than the preceding four years. But, one intense storm that drenched Tokyo on August 27 caused nearly 10,000 lightning strikes, dumped 110 millimeters of rain near Setagaya in just one hour, and toppled trees in Nerima and Suginami.

Asada says the firm is looking at how torrential rain and other extreme weather phenomenon may affect the games. “We are building a forecast model in collaboration with Tsukuba University that predicts metropolitan weather conditions in five-meter increments,” he exclaims. “Most detailed weather maps to date are in one-kilometer increments at best.” The project involves collecting data with weather observation drones, adding building heights, and comparing 2018 forecasts and actual temperatures to determine the rate of error. “We aim to provide athletes and spectators with pin-point weather reports and detailed, real-time information of conditions at venues around Tokyo.”

Planning for the Worst

While storms and torrential rain are worrisome, planners are most concerned about hot weather. Their anxiety stems from a record-breaking heatwave in August 2018 that sent over 2,700 people to the hospital as temperatures soared across Tokyo.

“Athletes know how to guard against heatstroke,” Asada declares. “We are more concerned about the spectators and volunteer staff.” He hopes Weathernew’s five-meter forecasting capability will help people find shade along the marathon route. He also recommends people wear hats, although he says parasols provide better protection against heatstroke.

The Tokyo metropolitan government is considering ways to protect spectators from heatstroke, including providing mist sprays and tents along pedestrian routes from train and subway stations to competition sites, offering information about preventative measures, and distributing fans and hats to the public. Planners will test these measures at a trial event this summer, and will also advise volunteers to rest during half of their five-hour shifts.

Tokyo Governor Koike Yuriko recently unveiled a prototype parasol-like hat that helps prevent the wearer from heatstroke. At her monthly press conference on May 31, the governor stressed that both high-tech measures and traditional approaches, like sprinkling water to cool pavement, would be implemented during the games. 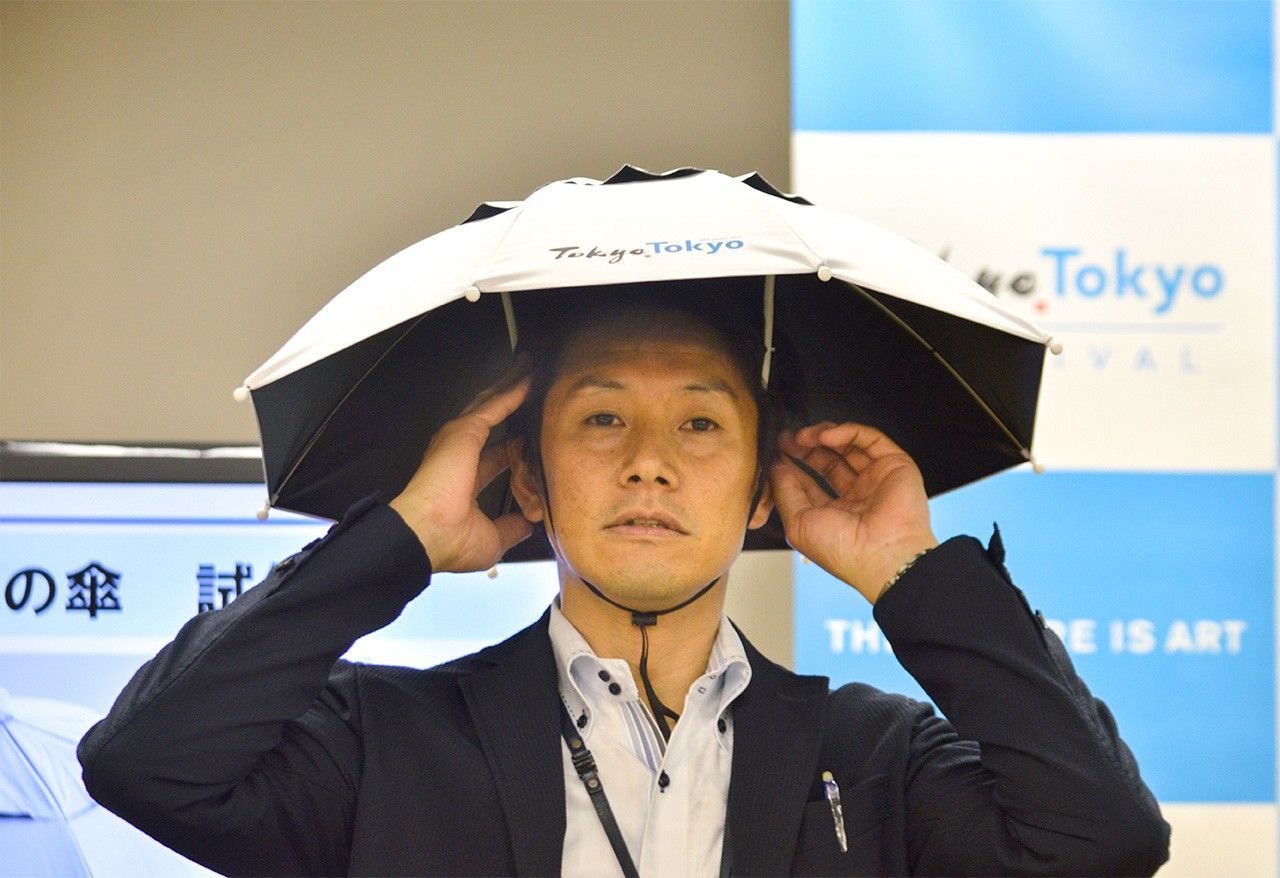 A Tokyo metropolitan government employee models a prototype of a parasol-like hat at a press conference on May 24, 2019. (© Jiji)

To protect the health of volunteers, the organizing committee is considering setting limits on locations and duration of outdoor shifts along with setting up air-conditioned enclosed rest areas. The committee is also thinking of allowing spectators to bring in bottled beverages, something that has been prohibited up to now.

Asada warns that everyone needs to prepare for the worst-case scenario of a hot Olympic summer and should take ample precautions in line with the weather forecast.

(Originally published in Japanese. Interview and text by Kuwahara Rika of Power News. Banner photo: Maruo Satoshi (right) grabs a drink during the men’s 50 km walk on August 30 at the 2018 Asian Games in Jakarta. © Jiji.)