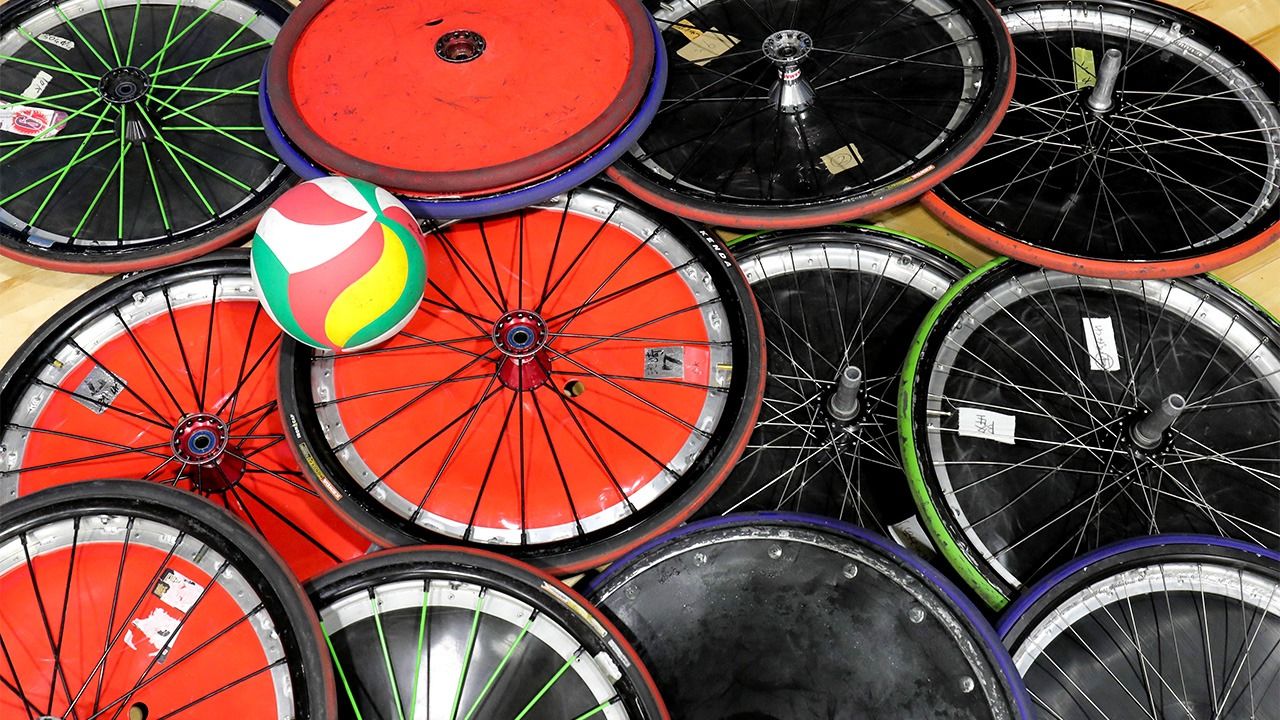 Counting Down to the 2020 Olympics and Paralympics

Society Sports Tokyo 2020 Jul 24, 2019
As Tokyo prepares for the upcoming Olympics and Paralympics, accessibility is an area of strong interest to many. Ice sledge hockey player and three-time Paralympian Uehara Daisuke commends the strong emphasis on universal design ahead of the games, but emphasizes that there is much more to be done.

A while ago I made a dinner date in central Tokyo with a friend who is in a wheelchair and her husband. However, to my chagrin, finding a suitable restaurants was nearly impossible. Almost all the places I looked at online were in the basements of buildings, and it was difficult to tell whether there was an elevator or just a narrow flights of stairs leading down. In addition, photos showed that most places to be decidedly cramped. Discouraged by my search, I eventually gave up.

Such an experience was nothing new for my friend and her husband, though. They told me that when making a reservation at a restaurant they always call to check things like if the restroom is wheelchair accessible and if there are steps inside the shop. The couple say that booking a place to stay is also challenging. It can be hard to find an accessible room as even large hotels may have just one or two on offer, often at prices well above standard rates.

I experienced this firsthand when reserving a hotel room to interview ice sledge hockey player and three-time Paralympian Uehara Daisuke for this article. Similar to my search for a restaurant, simply finding an accessible room in Tokyo was a chore. I looked into one of the metropolis’s newer hotels, but just three of the over 150 rooms were wheelchair accessible and the price was triple the normal rate. In addition, the room I eventually reserved was at the very end of the corridor, far from the elevators.

Uehara, who gets about unassisted, knows all too well the barriers disabled people face. Like my friends, he always calls to ask if restrooms are accessible before making reservations at a restaurant. “In many cases, staff don’t even know,” he explains. Put on the spot, it is not unusual for places to simply decline his business.

Hotels are hardly any better. He tells how he once reserved a standard guest room but was offered a wheelchair-accessible room when he checked in. “It cost an extra ¥5,000,” he exclaims, “so I politely declined.” As we speak, the reason for his refusal becomes apparent. Looking at the room we are in, he notes that the towel bars in the bath are low enough for a person in a wheelchair to reach easily. “I’ve been in so-called barrier-free rooms where they were installed too high.” Turning his attention to other aspects, he points out that “the shower head is adjustable, but is set at the maximum height instead of the lowest position. Also, the remote control for the TV is on a shelf beyond my reach.” He stresses that accessibility is not merely about installing hard facilities to accommodate people with disabilities. “This room, although billed as accessible, demonstrates an all-too-common lack of attention to details.” 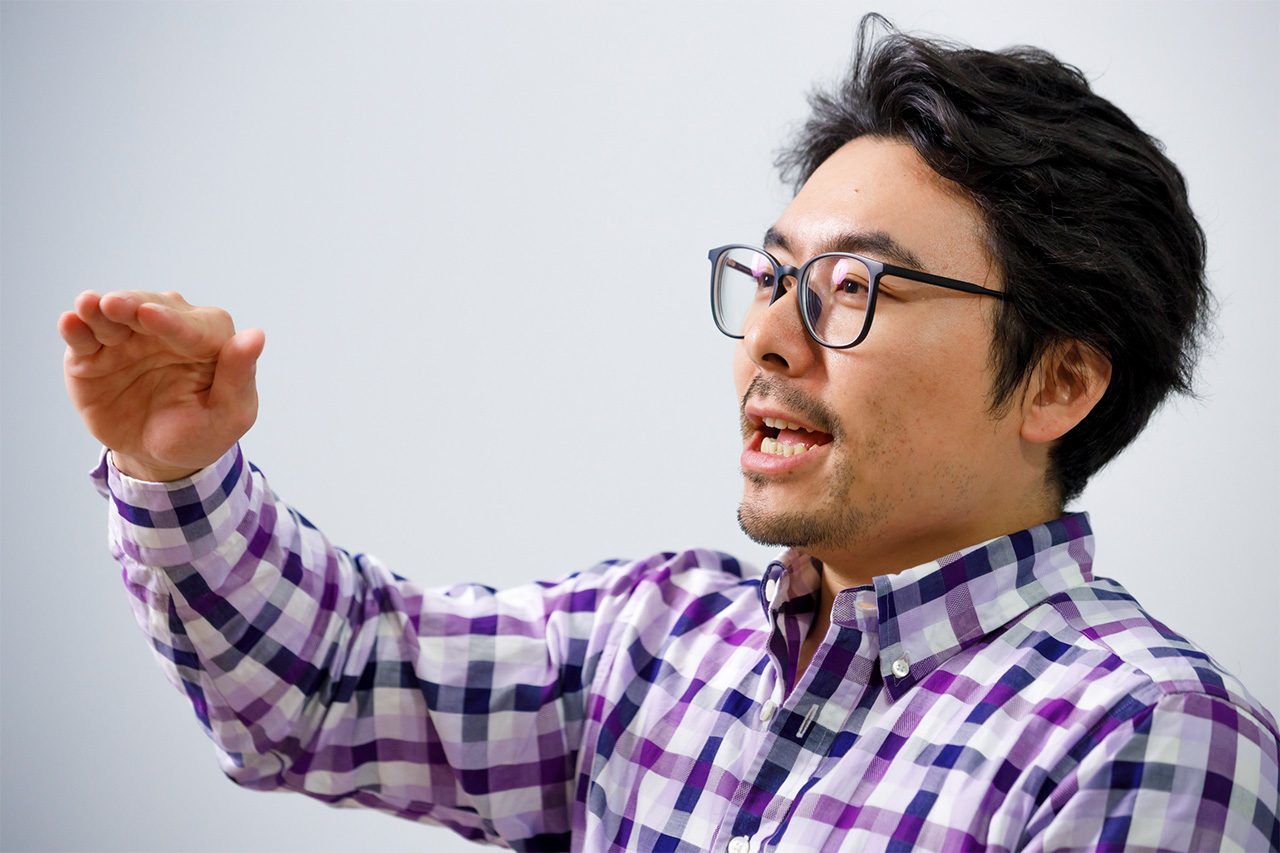 The Tokyo Metropolitan Government expects there will be 550 wheelchair-accessible hotel rooms in the metropolis by the time the Paralympics kickoff next year. Under a metropolitan ordinance setting out barrier-free construction standards, hotels over a certain capacity built after September 2019 will be required to make doorways to all guest rooms at least 80 centimeters wide and entrances to bathrooms at least 70 centimeters wide. While Uehara lauds these efforts, he remains skeptical that rooms will truly be accessible.

Japan has promoted universal design in the run-up to the 2020 Olympic Paralympic Games, but Uehara is critical of results so far and emphasizes that more progress is needed.

“Take Toyota’s Japan Taxi as an example,” he says, referring to a new model of taxi the automaker launched in October 2017 that incorporates universal design features. “The vehicles can accommodate wheelchair users, but the ramps are complicated to set up and it can take up to 20 minutes for a passenger to board. That’s ages compared to London’s famed taxicabs.”

Critics of Japan Taxi garnered some 12,000 signature for an online petition urging Toyota to make modifications. In March 2019, the car firm unveiled improvements to the taxi that included a simpler ramp design that Toyota claimed could be set up in three minutes. Several taxi companies in the capital bought the new model, and when asked about the ramp, one operator said that “deploying it takes about five minutes now, but depending on where the taxi is stopped, it can take longer.” 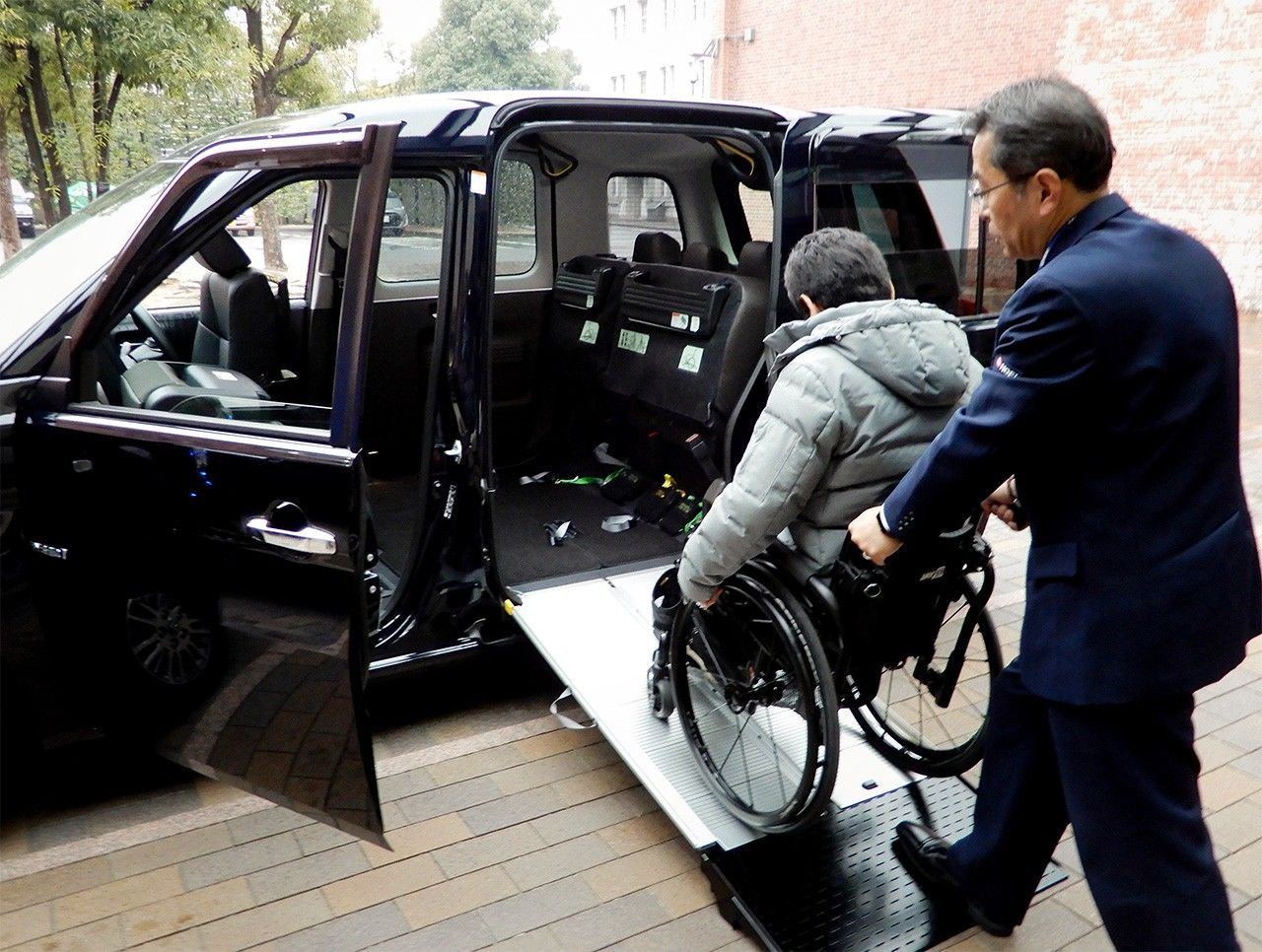 According to Uehara, other types of public transportation also have accessibility issues. “Many visitors coming for the Tokyo Olympic and Paralympic Games will want to hop on the Tōkaidō Shinkansen to visit Kyoto,” he explains. “But of the 1,300 seats on the high-speed train, only two are designated for wheelchairs users. What’s worse is that those seats are open to anyone using the reservation app and often get snapped up by able-bodied riders, forcing people in wheelchairs to spend the trip in the deck area between cars.”

He also says that new touch-screen ticket vending machines are also an issue. Not only are they are more difficult for visually impaired people to use than the earlier types that had buttons and Braille lettering, the screens are often set at an angle and are hard for wheelchair users to see.

Uehara says that people in wheelchairs who want to stay fit or play sports will likely find gyms reluctant to allow them to use their facilities, something he stresses reflects poorly on a country that is set to host major sporting events like the Olympics and Paralympics.

“Most gyms say no to wheelchairs because they claim they leave marks on the floors,” he exclaims. “But there are tires nowadays that don’t make any marks. And besides, I’ve seen plenty of gym floors scuffed up by shoes, so what’s the difference? I’d like to know why one is okay but the other isn’t.”

A native of Nagano Prefecture, Uehara recalls getting rebuffed when attempting to reserve a local skating rink to train for the last year’s winter games in Pyeongchang, South Korea. Fearing damage to the ice the facility explained that sleds were not allowed, a response that Uehara found baffling as Nagano hosted the winter Paralympics back in 1998. However, the same thing happened when he tried to get ice time at the National Gymnasium in Tokyo. Refusing to take no for an answer, he contacted the Sports Agency to ask whether they were really serious about supporting para athletes. “I think I got my point across because when I tried again later at the National Gymnasium, I was allowed to use the facilities,” he says. Still, the experience left him questioning why he had to go to so much effort just to find a place to practice. 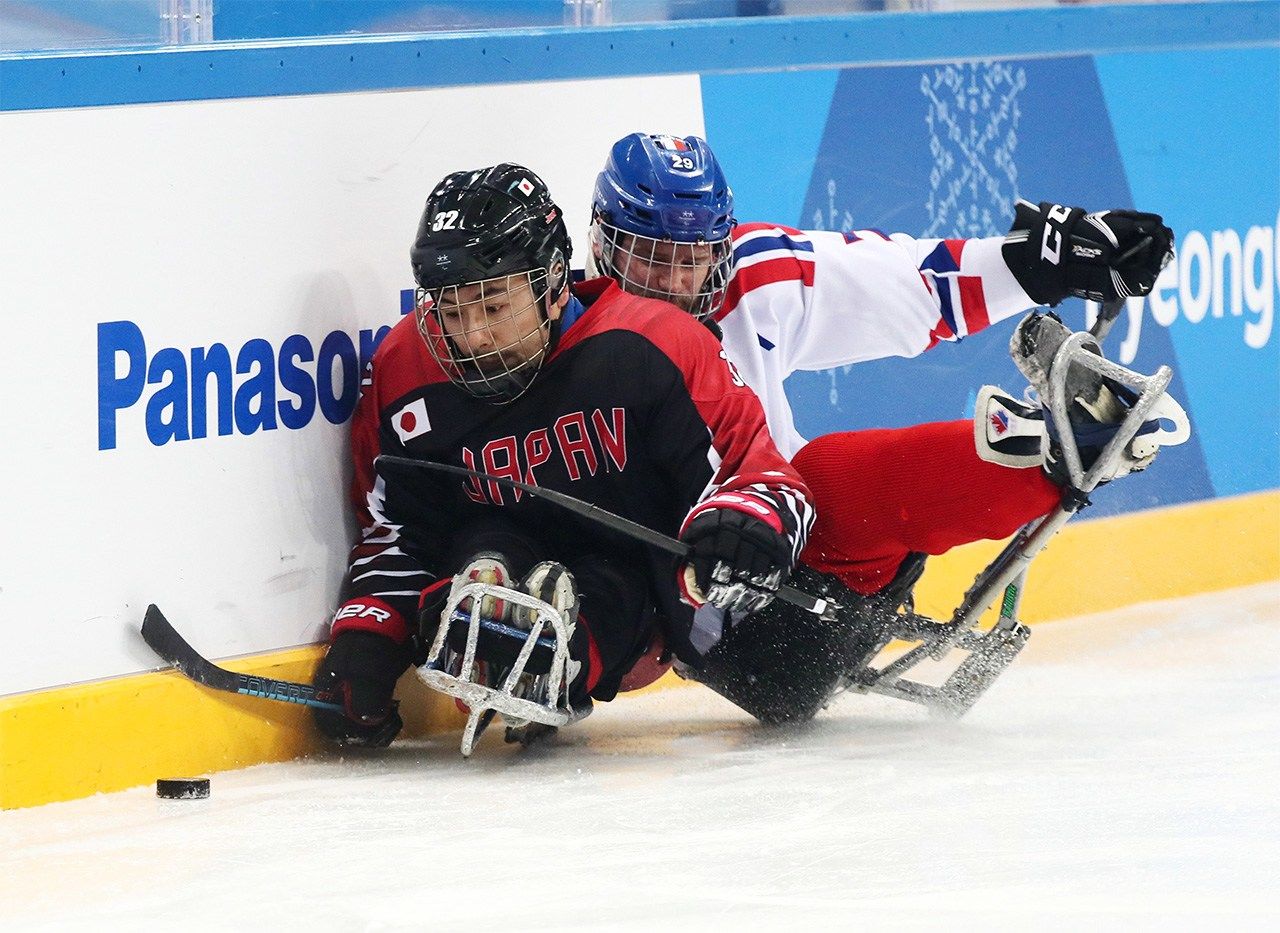 Uehara Daisuke (left) battles for the puck against a Czech Republic player on March 13, 2018, in the first round of ice sledge hockey at the Pyeongchang Winter Paralympics. (© Jiji)

Uehara says he has come across any number of similarly ridiculous situations. However, rather than simply complain, he chooses to highlight the difficulties encountered by people with disabilities in a smart and humorous way. One means of doing this is through his involvement with D-Ships32, an NPO that hosts activities that bring disabled and able-bodied people together.

At the moment Uehara is actively looking for older gyms where he and his friends can play wheelchair sports, which for him also includes polishing the floors afterward. “I want to show gym operators that we’ll leave the place in better shape than we found it,” he says. “There’s a publicly-operated gym in Shibuya that’s rented to players of wheelchair rugby for four years now. In that sport, pine resin needs to be spread on the floor for traction. After practicing for a few hours, the players then take about an hour to clean the floor. The municipal authorities are really pleased at how the place is left looking spick-and-span, and they’re much more willing to rent the premises out for wheelchair sports now. We’re also attracting more volunteers who help us clean up, and they’ve become fans of para sports. This is the kind of activity I’d like to spread throughout Japan.”

Uehara feels that Tokyo can learn from Pyeongchang to make Paralympic venues more inclusive: “Unlike most skating rinks, the ice hockey venue at Pyeongchang had wheelchair seating all around the perimeter. It was a great idea because wheelchair users could sit wherever they wanted. One issue, though, was that wheelchair spaces were accompanied by fixed seats, making it difficult for two people in wheelchair to sit next to each other. I suppose planners assumed that everyone in a wheelchair would be accompanied by helpers, but ideally, the spaces should have been left completely open and portable seating provided for helpers when needed.” 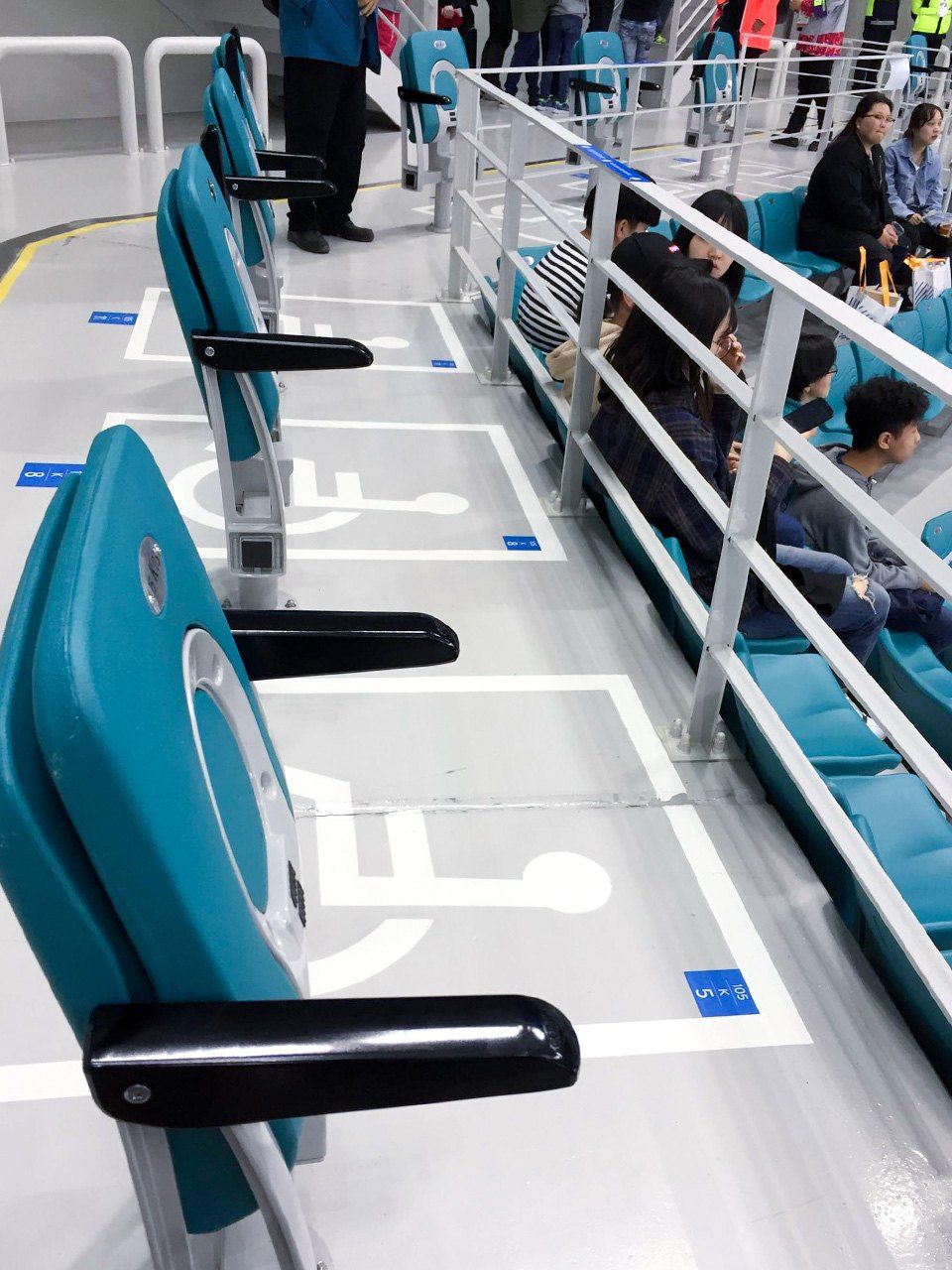 Uehara has other examples from the Olympic Village in Pyeongchang that Tokyo planners will want to consider. In the dining hall, cables covered by protective casing ran across the floor and created slight bumps. He says these were real barriers to wheelchair users holding food trays. “To go over the bumps, you had to place your tray on your knees and push yourself with both hands,” he recalls. “I saw several people get soaked when they spilled their soup, and I wondered why no one had thought of running the wiring across the ceiling."

The toilets were another problem. “You approached via a slope, but there was no landing at the top, so you rolled backward when you tried to open the door.” Although he admits the scene was somewhat comical, he insists that more thought should have been put into the design of the cubicles.

Wiring crosses the floor in the athlete’s dining hall (left), and toilet cubicles with ramps but no place for wheelchair users to stop and open the door.

The planning committee for the Tokyo games is holding accessibility workshops headed by para athletes and experts in various fields. However, Uehara is not convinced that the mistakes made at Pyeongchang can be avoided in 2020.

“There needs to be better communication,” he declares. “Statistically, one in seven people are likely to have a disability of some sort. This is why I promote an idea that I call ‘from friend to friend.’ In other words, people shouldn’t think that that disability and lack of access have nothing to do with them. They would be more aware of issues if they had a friend with a disability or had some kind of impairment themselves.”

Uehara believes that the Tokyo games are a perfect opportunity to encourage people to adopt more open mindsets. “Using the Olympics and Paralympics to raise the level of accessibility is a fine objective, but it’s not the ultimate goal,” he says. “It’s just the beginning.” 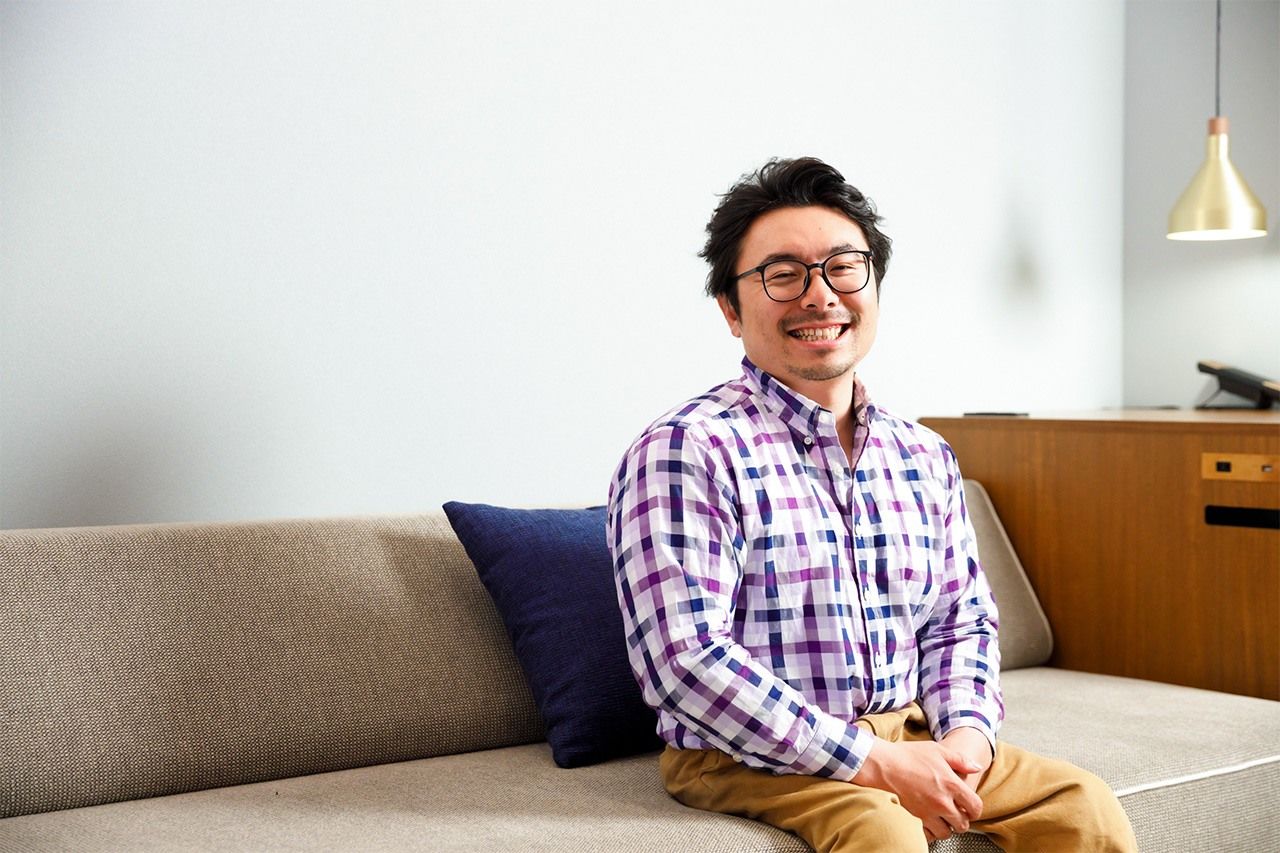