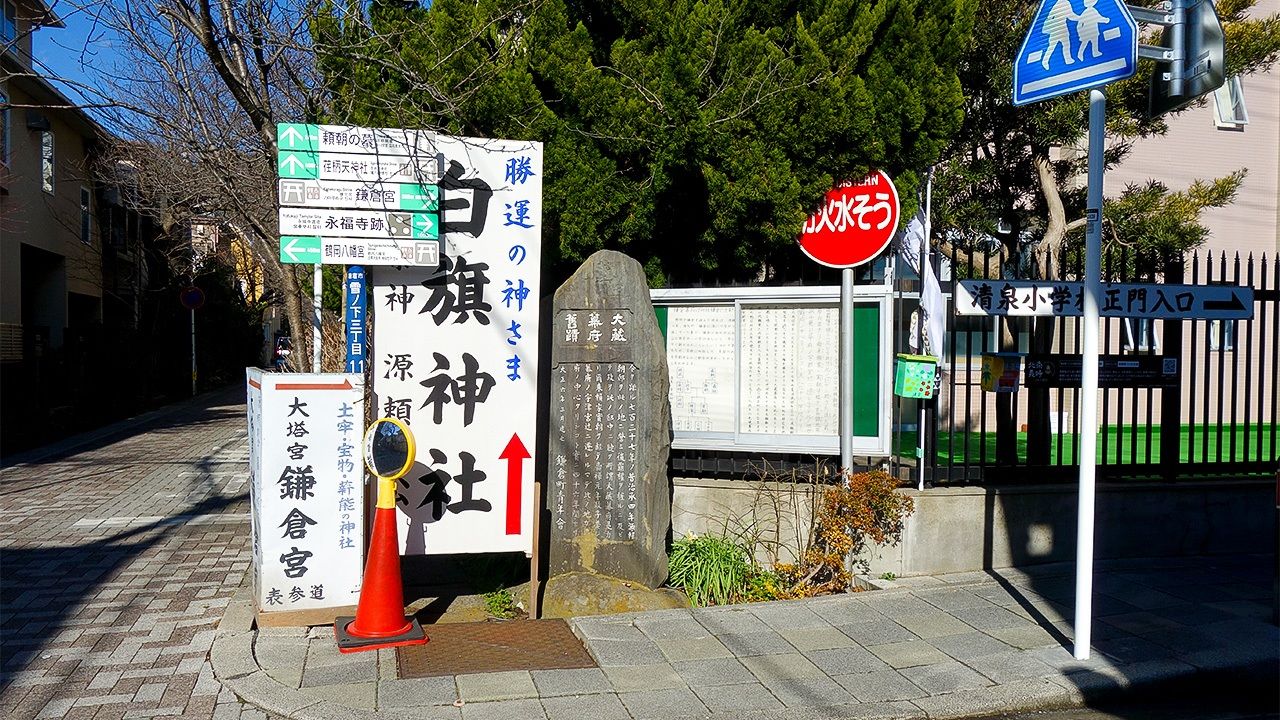 Where Was the Kamakura Shogunate and When Did It Begin?

History Travel Culture Society Mar 3, 2022
Most people are well aware that the Edo shogunate’s seat of power was Edo Castle, but what of the Kamakura shogunate? The focus of NHK’s new historical taiga drama serial Kamakura-dono no 13-nin (The 13 Lords of the Shōgun), Minamoto no Yoritomo, the first shōgun, resided in a surprisingly inconspicuous location.

One of Kamakura’s most famous landmarks is the shrine Tsurugaoka Hachimangū. Its majestic main hall sits imposingly at the top of a two-kilometer approach, the road Wakamiya-ōji. The building is fitting as a spiritual buttress to samurai society, but it was not the hub of actual political activities. 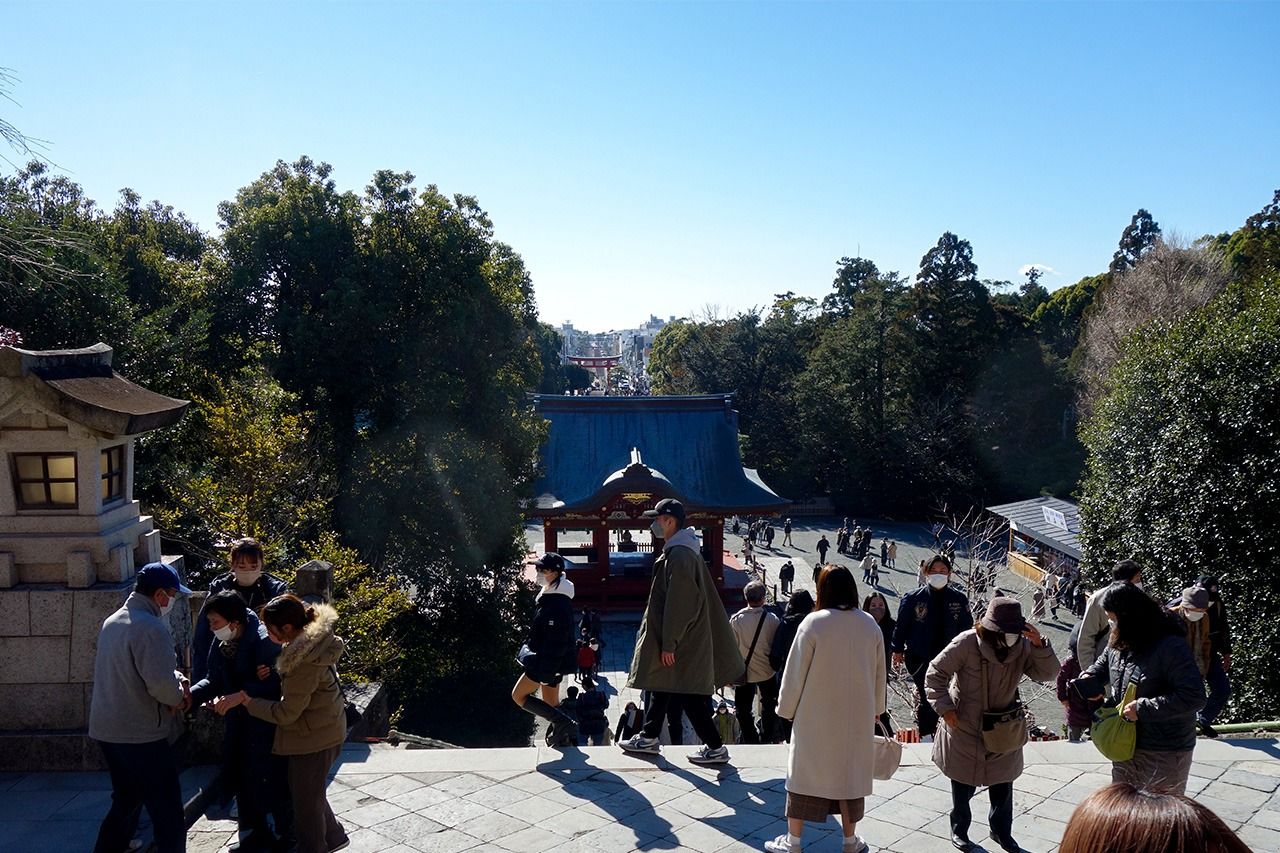 Wakamiya-ōji, the approach to Tsurugaoka Hachimangū, viewed from the shrine. (Photo courtesy of the author)

Yoritomo, samurai leader of Japan’s eastern provinces, established his seat of government in the unobtrusive locality of Ōkura, to the rear of Tsurugaoka Hachimangū. For this reason, his government was also known as the Ōkura shogunate. Now, the only reminders of the shogunate are a stone monument on the grounds of Seisen Elementary School and the neighborhood of Nishimikado, whose name recalls the western gate of the compound. 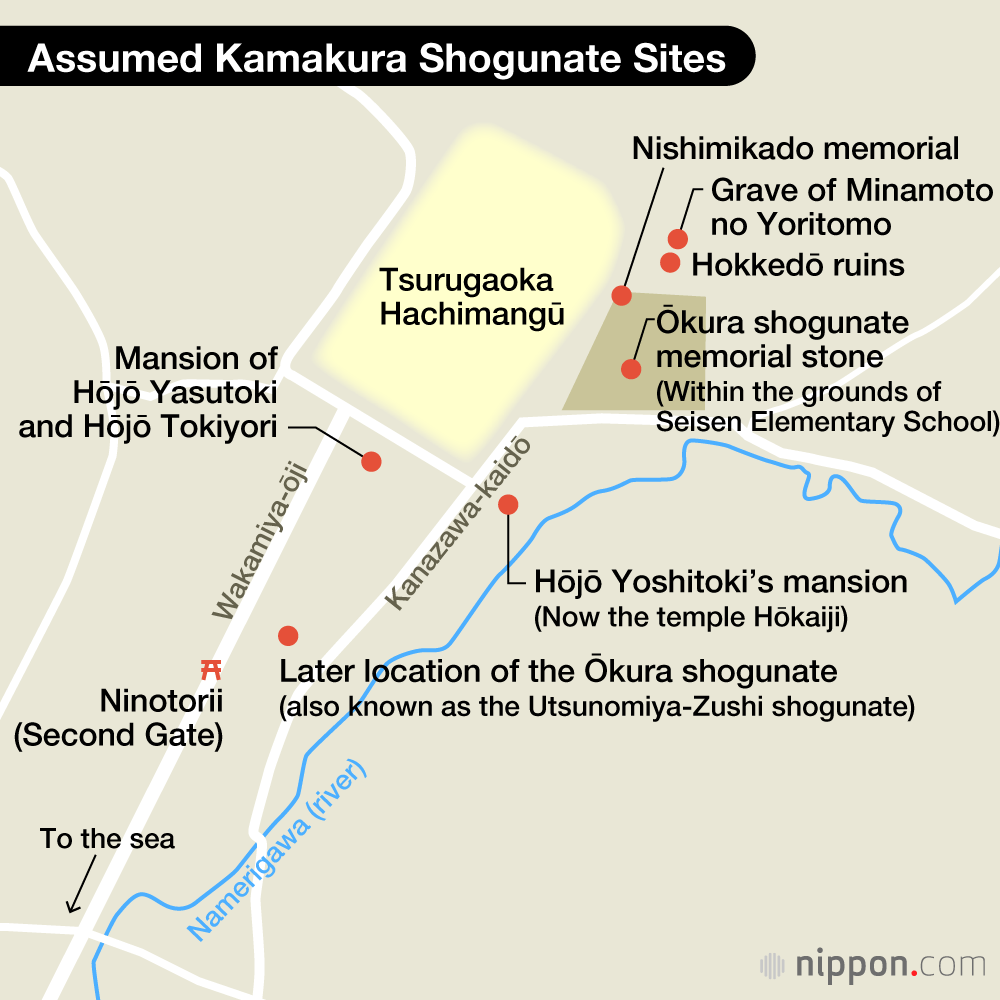 According to the Kamakura Museum of History and Culture, the site measured over 200 meters by 200 meters, but this is little more than a traditional assumption, as there is limited excavated evidence. Museum curator Ōsawa Izumi explains that an excavation to the east of the area found the remains of a residence, leading to the theory that the grounds of the shogun’s residence were actually farther to the east. In any case, it seems to have been relatively compact. The Azuma kagami, a medieval chronicle of the Kamakura shogunate, states that 311 samurai gathered for the construction of the residence. 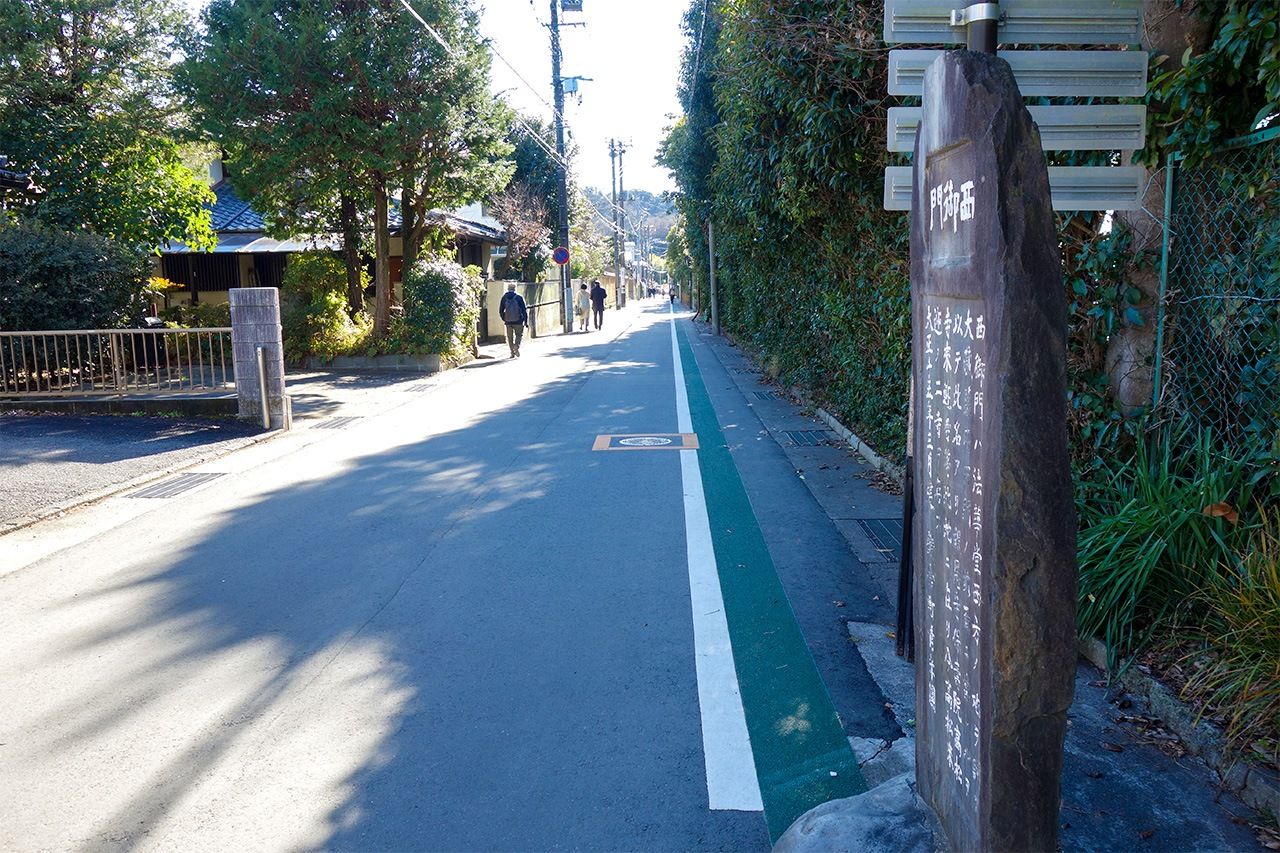 The stretch extending from the Nishimikado (foreground) to Kanazawa-kaidō in the distance is considered one side of the grounds of the Kamakura shogun’s residence. (Photo courtesy of the author)

The shogunate was only located at Ōkura from the time of Yoritomo (1147–99) until the time of Sanetomo (1192–1219), during the regency of Hōjō Yoshitoki and his sister, the “nun-shōgun” Masako. It was relocated during the time of the third shikken (regent) Hōjō Yasutoki.

Preconceptions About the Kamakura Era

School history classes traditionally taught that the Kamakura shogunate was established in 1192. After defeating the Taira clan in the 1185 Battle of Dan-no-ura, Yoritomo was granted the title Sei-i Taishōgun (shōgun), and this was considered the inauguration of his government in Kamakura. But the remains of the Kamakura shogunate do not give the impression of a fully fledged regime.

This has led to a revision of the history books with a fresh understanding that Yoritomo established his Ōkura shogunate in 1180, some 12 years earlier than tradition dictates.

But the five-year war against the Taira Clan, from the 1180 Battle of Fujigawa to the Battle of Dan-no-ura, were times of great unrest. Under these circumstances, Yoritomo was hard-pressed just setting up residence and establishing a Samurai-dokoro (Board of Retainers) to oversee military affairs. It was more of a “camp” than a shogunate, with the head of the Samurai-dokoro exercising overall command as military magistrate in war. It was a further 12 years until the establishment of the governmental arms such as the Board of Inquiry, a court for land-related litigation, and the Mandokoro (financial department).

During the Genpei War, fought between the Taira and Minamoto clans, warriors of the eastern provinces stayed in their territories, on standby in the event of an attack on Kamakura. Ōsawa explains that lower-ranking vassals were not stationed with the shogunate, but traveled frequently between their own lands and Kamakura. The shogunate therefore did not require a large castle or grounds.

Timeline of the Shogunate’s Establishment

Professor Hongō Kazuto of the University of Tokyo Historiographical Institute questions the designation of 1192, the year Yoritomo received the title shōgun, as the start of the shogunate. In his book Hōjō-shi no jidai (The Era of the Hōjō), he points out it was “the year that the imperial court gave acknowledgment of the shōgun as the ruler of the eastern provinces,” which centers the imperial court as the protagonist.

But he explains that Yoritomo was determined to create a group “of the samurai, for the samurai,” without reliance on the rationale of the imperial court, and 1180 should therefore be seen as the start of his government. Although Yoritomo had not fully consummated his grip on power, owing to ongoing turbulence, Hongō considers it significant that he had inaugurated a samurai-led government.

Yoritomo died in 1199, aged 53, as the result of a fall from a horse. Although his death is generally considered an accident, there are also theories involving foul play and even vengeful ghosts. In the next installment in this series, I will examine the nature of his short reign. 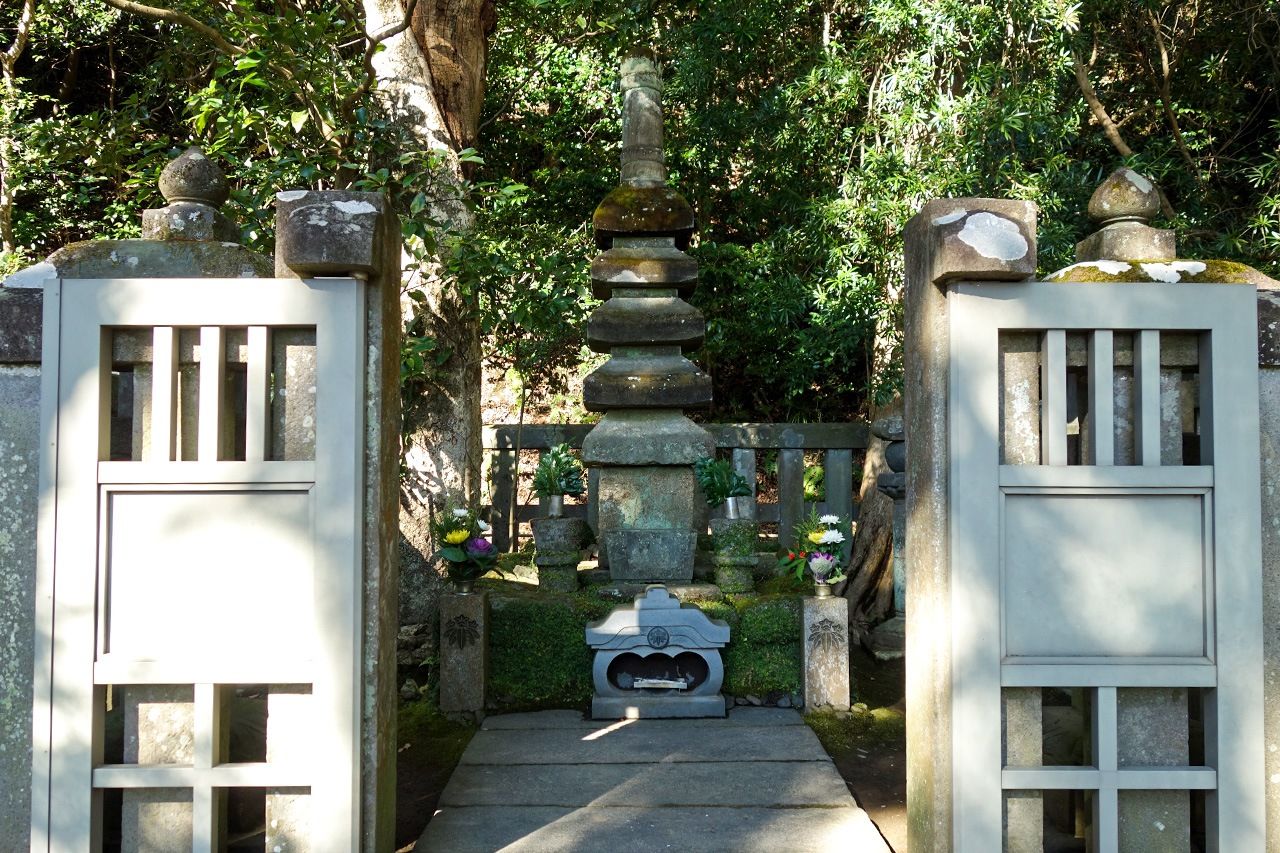 The grave of Minamoto no Yoritomo, near the ruins of the Ōkura shogunate. (Photo courtesy of the author)