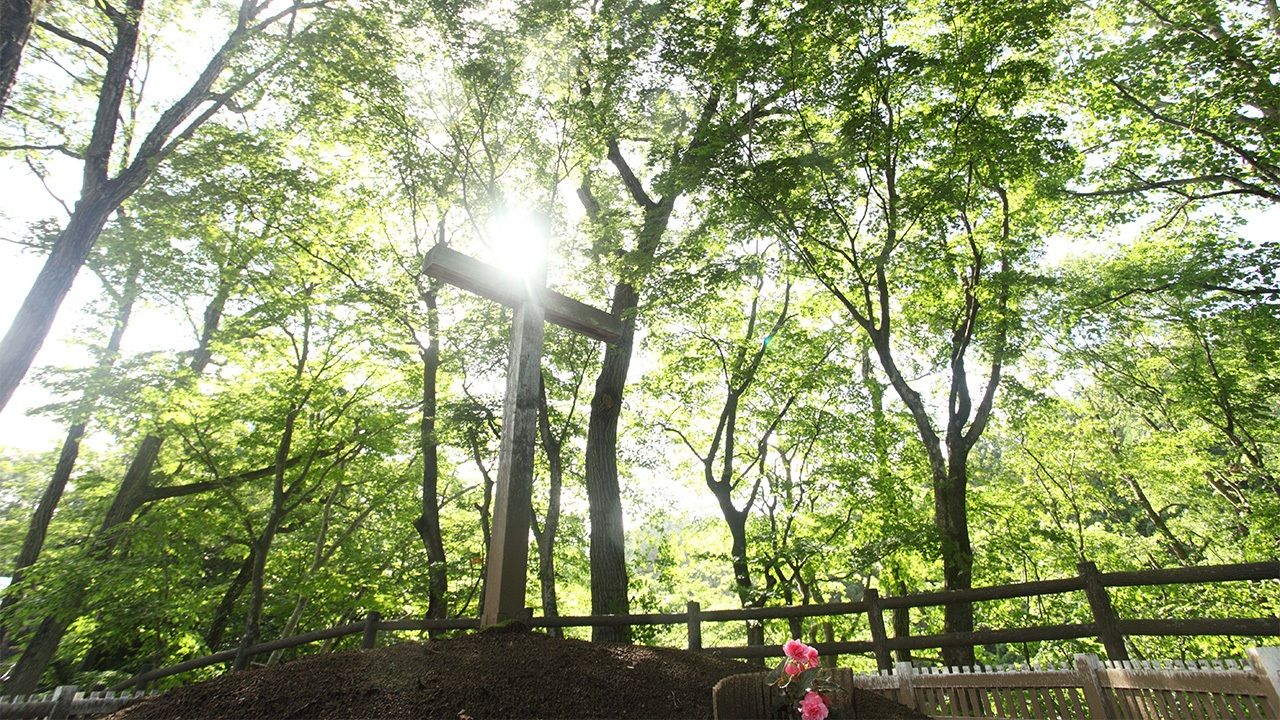 Keeping the Faith: Christ’s Tomb in Aomori and Japanese Religion

Society Culture Mar 20, 2019
In 1935, the tomb of Jesus Christ was allegedly discovered in Aomori Prefecture, northern Japan. Although no local residents actually believes the Messiah rests in their community, they hold a Christ Festival at the site every year.

I learned by chance of Christ’s Grave in the village of Shingō, Aomori Prefecture. As I drove westward along Route 454 from Hachinohe to Lake Towada the words “Tomb of Christ” printed on a road sign caught my eye as I passed through the community. As a researcher of pilgrimages, I had to pay a visit.

I pulled off the narrow thoroughfare and made my way to Christ’s Village Park, where the grave is located, situated atop a small hill by the roadside. There I found a pair of round burial mounds topped with crosses. Coming across the tomb of Jesus in rural Japan was unusual enough, but two graves?

According to a nearby park notice, Jesus Christ had come to Japan at the age of 21 in the pursuit of divine knowledge. At 33, he returned to Judea, where he tried to propagate his teachings. Unsuccessful, he was condemned to crucifixion. The signboard then tells that his younger brother Isukiri saved him by taking his place on the cross, and Christ himself returned to Japan via Siberia. The unlikely tale finishes with Jesus settling in the village of Herai (now Shingō) and living to the ripe old age of 106. One of the graves is for Christ, while the other is said to contain a lock of Isukiri’s hair.

A small museum near the burial site displays photographs of local “descendants” of Christ alongside exhibits of traditional agricultural implements and clothing. There are also various items alleging a connection between the village and Judea along with what purports to be Christ’s will. Written in Japanese, the document states that after escaping crucifixion, Jesus changed his name to Toraitarō Daitenkū, married a woman from the village, and raised three daughters. 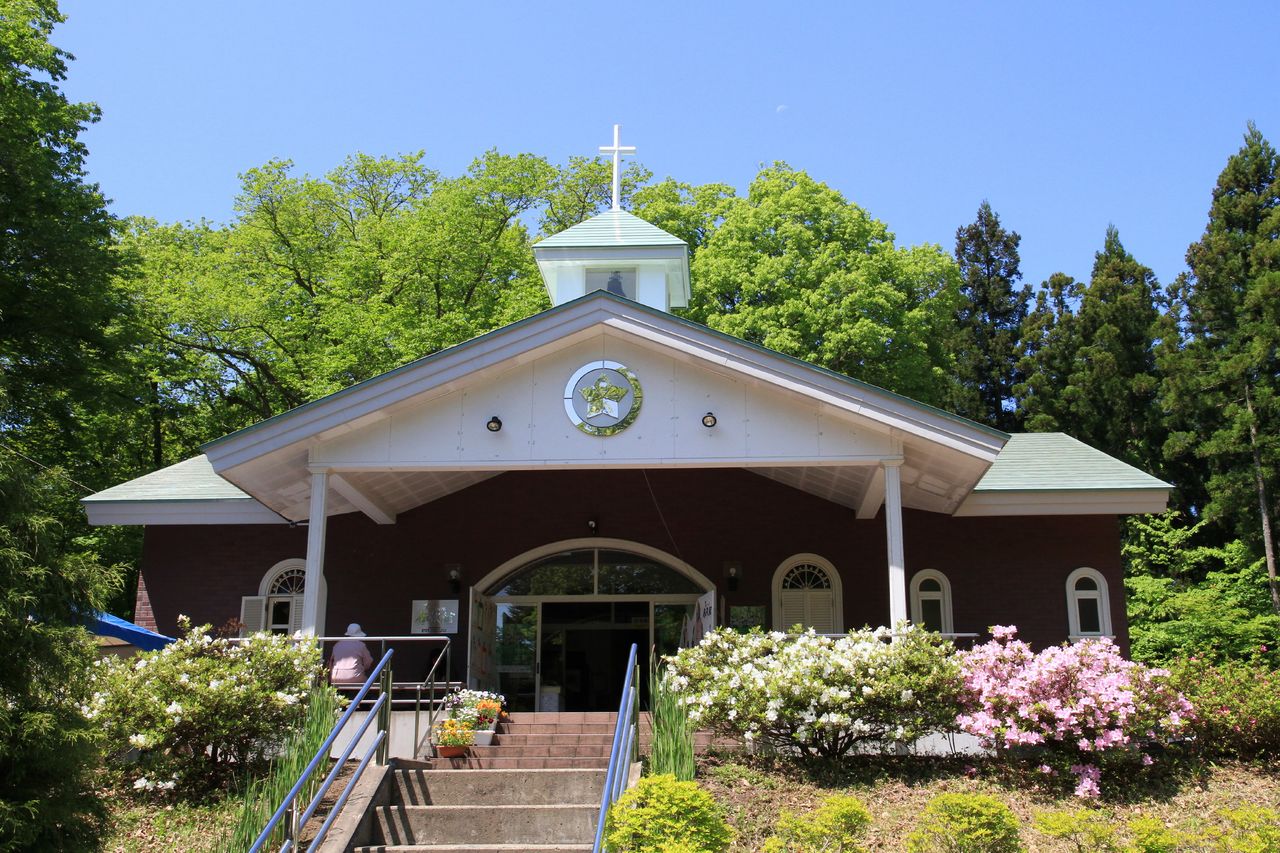 It goes without saying that the grave is not Christ’s. The tomb of Jesus is commonly believed to be in the Church of the Holy Sepulchre in Jerusalem, although there is no archaeological evidence even within Israel as to its actual location. The most compelling argument, from both academic and religious standpoints, is that no such grave exists as the Bible states quite clearly that Jesus ascended to heaven three days after his death by crucifixion.

The story behind the Aomori grave dates back to 1934. At that time, the village head of Herai was looking to take advantage of a movement to turn the area around nearby Lake Towada into a national park. He hired a painter by the name of Toya Banzan to conduct a survey of the region with the aim of establishing a deep connection between the lake and a section of the village called Mayogatai.

Toya was fascinated with famous texts known as the Takeuchi manuscripts, a set of apocryphal documents written in a strange script that Takeuchi Kyomaro (1875–1965), the founder of a Shintō-style new religion, claimed had been passed down through his family. Although the texts were obviously a hoax, Takeuchi contended they recorded the secret history of Japan prior to the reign of the legendary Emperor Jinmu. According to the manuscripts, luminaries like Gautama Buddha, Confucius, Mencius, and Moses had all undergone religious training in Japan, thus placing the cultural roots of China and the West, one an ancient paragon of art and culture and the other an exemplar of modernity, firmly in Japan.

In the summer of 1935, Toya invited Takeuchi to take part in the survey in Herai, where he miraculously discovered Christ’s grave. He is said to have made a silent prayer before the burial mounds before yelling something to the effect of “I knew it was here!”

Takeuchi’s findings came as a surprise to villagers, who had never heard of any tradition related to Christ. Up through the end of World War II, a time rife with anti-Western sentiment, residents seemed not to appreciate the association, and one of the village employees even told me that members of a local revitalization project had been rebuffed by locals when they went around asking for items related to the site. The lack of interest continued after the war and the grave was forgotten for a time.

Then in the 1970s an occult boom in Japan brought renewed interest in the site and it became regular fodder for magazines and fantasy fiction. Well-known authors of popular fiction like Takahashi Katsuhiko and Saitō Sakae were among those to include the grave in their works. The fact that the village had no Christians merely added to the mystery. 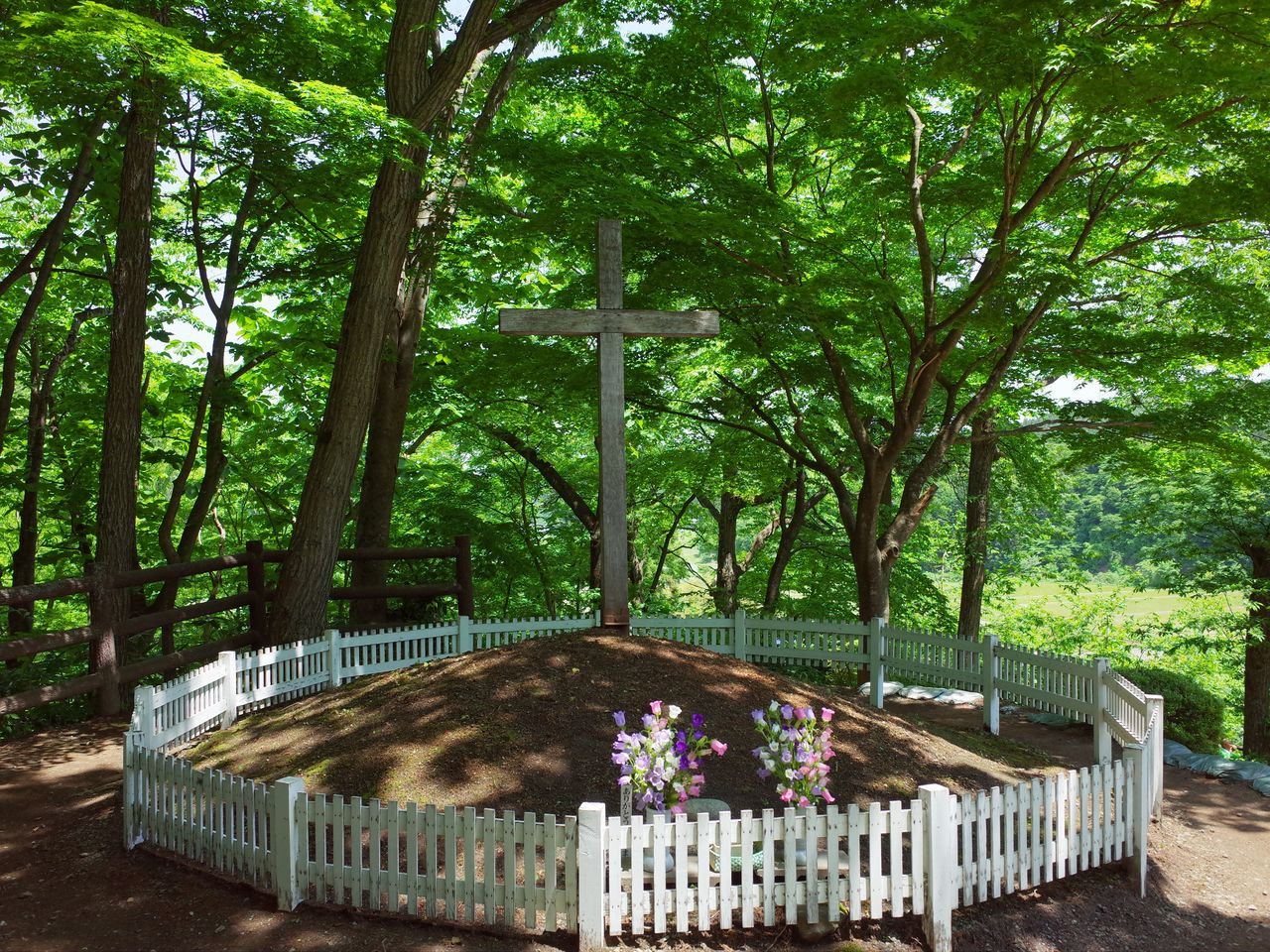 The burial mound with a cross on top. (Courtesy Okamoto Ryōsuke)

Nowadays, the village holds the Kirisuto matsuri, or Christ Festival, each year in early summer. The local chamber of commerce launched the event in 1964, but eventually passed on its running to the local tourism association. The celebration includes a Shintō-style ceremony—a priest approaches the grave and recites norito ritual prayers while guests offer ceremonial branches—a shishimai lion dance, and traditional bon odori performed by kimono-clad dancers around the gravesite. The atmosphere is subdued, and government and opposition politicians sometimes attend. 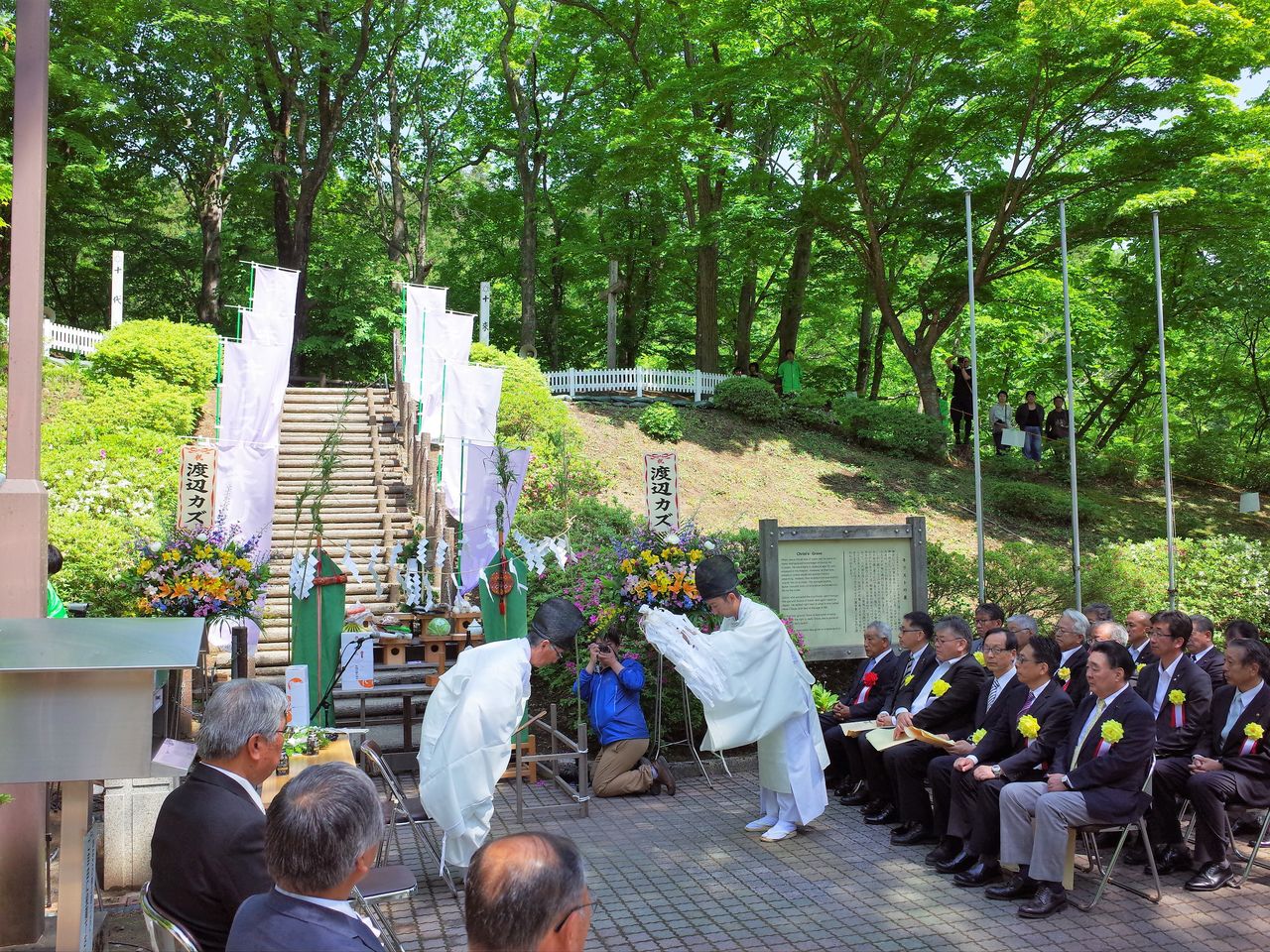 The Christ Festival is held every summer. (Courtesy Okamoto Ryōsuke)

The sight of women in kimono gracefully dancing to the folk song nanyadoyara around two great crosses has a tremendous impact. Television programs and guidebooks have featured the event, spinning it as one of Japan’s many idiosyncratic festivals. More recently, social media has boosted Shingō’s profile, drawing attention to it as an offbeat tourist spot, and every year the Christ Festival draws hundreds of visitors—a considerable turnout for a community of 2,500.

None of the villagers I spoke with thought the grave was genuine, although a small fraction of visitors seemed to believe in its authenticity. This raises the obvious question of why the local community continues to hold the festival. Is it just a way to draw tourists?

The priest who leads the festival told me he felt it was important to conduct a memorial service regardless of who actually occupies the graves. “Even if by chance Jesus Christ is buried here,” he explains, “this is no problem for Shintō, with its myriad gods.” The municipal workers who assist in the event agree, reasoning that either way the grave holds a village ancestor and it is their duty to carry on the longstanding tradition of making offerings.

Prior to Takeuchi declaring the site Christ’s tomb, villagers believed that an unknown forebearer was interred on the hilltop. For generations people have handed down the responsibility of tending the site, a tradition that residents today continue to observe. Although it takes the form of the Christ Festival, it is an age-old community practice unrelated to religious faith or doctrine.

This is actually true for Japanese religion in general. Many Japanese people visit shrines in the New Year, get married in pseudo chapels in Christian-like ceremonies, and hold Buddhist funerals. Many houses also have both Buddhist and Shintō altars. Some people see Japan’s jumbling of religions as unprincipled while others view it as a form of atheism. Funerals in particular have come under criticism for merely going through the motions of a religious ceremony.

I would ask, though, whether religion really is a question of belief alone. The idea of a faith centered on codified doctrine derives from Western Protestantism. Shintō has no clear doctrine, while Japan’s version of Buddhism differs considerably from Gautama’s teachings, which provide no room for venerating ancestors and graves in its tenet that salvation is found by cutting ties with the secular world.

This does not mean that religion in Japan is false. It is based on actions rather than beliefs, and is grounded in community. Japanese people do not visit shrines or hold funerals avidly believing in the existence of the sun goddess Amaterasu, the Pure Land, or Hell. Instead, they are following community traditions. It is because Christ’s Grave in Shingō is so patently fake that it demonstrates how Japan’s religious culture lies separate from a framework of belief and unbelief.