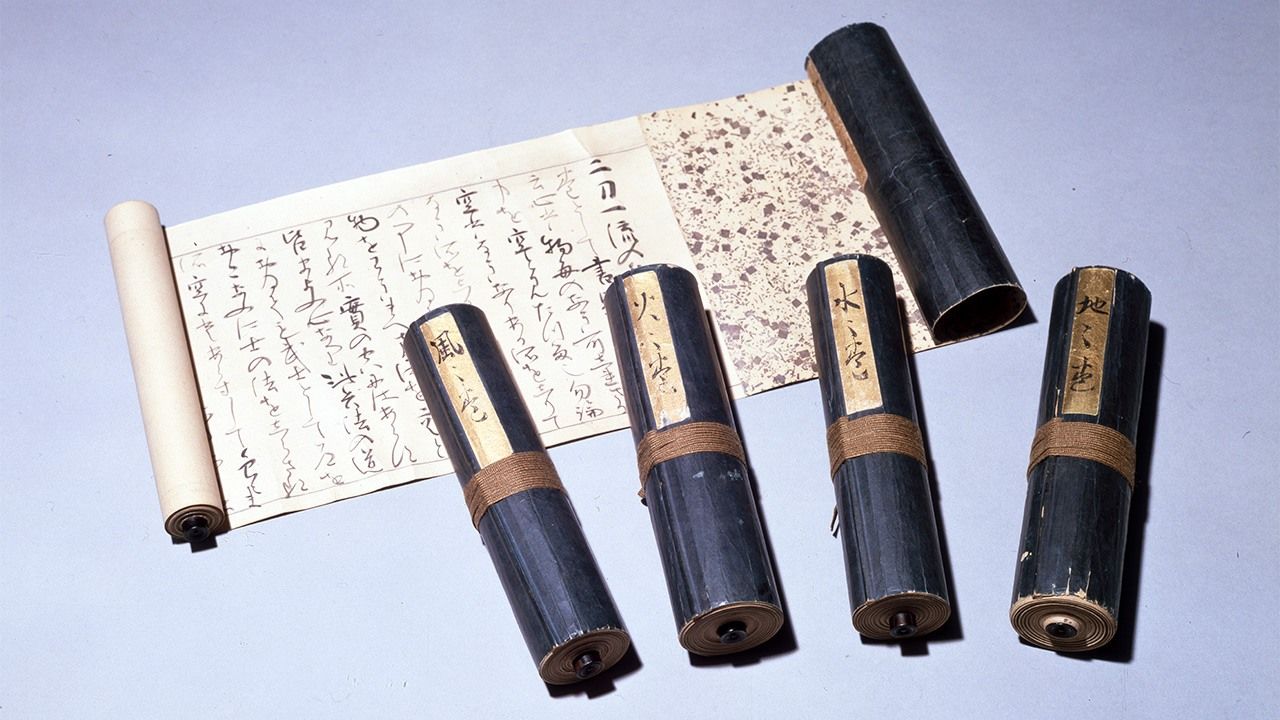 Master Swordsman Miyamoto Musashi: The Man Behind The Book of Five Rings

History Society Jul 25, 2019
Miyamoto Musashi, swordmaster of the early Edo period (1603–1868), fought over 60 battles during his life, losing none. His Gorin no sho (The Book of Five Rings) is considered one of the greatest works on swordsmanship. This essay considers the real Musashi, based on historical facts.

Miyamoto Musashi’s Gorin no sho (trans. The Book of Five Rings) and the novel Miyamoto Musashi (trans. Musashi) by Yoshikawa Eiji (1892–1962) have been translated into many languages and are well-known outside of Japan. But the duels of samurai and master swordsmen depicted in novels, cinema, and manga are fictional accounts based on a biography of Musashi authored by Toyoda Kagehide 130 years after his death. Below I consider the real Miyamoto, as revealed by scholarly research, and discuss his thinking based on the content of his Gorin no sho.

Transitioning from an Age of War to Lasting Peace

The legendary swordsman Miyamoto Musashi authored a text on the art of swordsmanship at an early age, which he rewrote twice, finally producing Gorin no sho in his final years. He left behind two letters addressed to daimyō lords, a dozen or so ink paintings, and a collection of wooden swords and sword flanges that he himself had made. Together with the writings of his adopted sons and disciples and historical records of numerous fiefdoms, allows for comprehensive research that has revealed details of most of Musashi’s life.

Musashi was born in 1582 and died in 1645. Before his birth, Japan had seen a century of successive battles. This strife was followed during his lifetime by a period of unification, then the establishment of the Edo shogunate at the beginning of the seventeenth century. The life of Musashi can be divided into four periods. These are connected to drastic changes in Japanese society, as outlined below.

A seated image of Miyamoto Musashi painted during the Edo period; artist unknown. (Courtesy of the Kumamoto Prefectural Museum of Art)

In Gorin no sho, Musashi describes himself as the Samurai of Harima, his birth province. According to his son Iori, Musashi was born into a samurai family in Harima, close to Himeji castle in Hyōgo. When the forces for which his clan fought were defeated in Japan’s unification, he was adopted at an early age by Miyamoto Munisai, a samurai in Okayama. Musashi learned the art of swordsmanship under the tutelage of Munisai, also known by the name Tenka Musō (literally “Without Peer in the Realm”), bestowed by the Muromachi shōgun. At the age of 13 he fought his first battle, defeating a renowned martial artist.

Following the Battle of Sekigahara in 1600, at age 21 he traveled to Kyoto, where he fought and defeated numerous warriors. Investigation reveals that Musashi authored Heidōkyō (Mirror to the Way of Strategy), comprising 28 articles, at the age of 24, and had established his Enmei-ryū school of swordsmanship under the alias Tenkaichi (literally, “Greatest in the Realm”). Later, he traveled throughout Japan honing his skills with the blade, and is said to have defeated his opponents in over 60 life-and-death battles before turning 29.

His final battle pitted him against the renowned Kojirō, founder of the Ganryū school of the blade. The account claiming that Musashi arrived for battle after the agreed time, enraging his opponent, is a fabrication; it does, though, appear to be true that he defeated Kojirō, who was famed for fighting with a long sword almost a meter in length, with an even longer bokken, or wooden sword.

After he turned 30, Musashi pursued an even deeper truth, which he attained at approximately 50 years of age, enabling him to eventually pen Gorin no sho. Research into this era provides records that he fought under a daimyō allied with the Tokugawa in the summer campaign of the siege of Osaka. Two years later, he entered the patronage of the Himeji clan based at Himeji castle as a guest swordsman. His position gave him greater freedom than the rank of retainer, allowing him to train the eldest son of the domain’s lord. During this time, he continued his search for a theory of swordsmanship, and began producing ink paintings.

Koboku meigeki-zu (Shrike in barren tree), an ink painting by Musashi. Gorin no sho advocates involvement in calligraphy and other arts as means of training in the art of war. (Courtesy of the Kuboso Memorial Museum of Arts, Izumi)

Nine years later, the feudal lord’s son died suddenly, ending Musashi’s position in that domain. Consequently his son Iori entered the service of the neighboring Akashi domain (now Hyōgo), whose castle Musashi had assisted in constructing; the father accompanied him there, becoming a guest swordsman to this clan. Five years later, Iori became a karō (principal retainer) to the Akashi at the age of 20. It is believed that his success was also in recognition for the service of Musashi, his adoptive father. The following year, the shogunate ordered,the Akashi clan to move to Kokura in Kyūshū and the Miyamotos made the move to what is now Kitakyūshū. Five years later, a large-scale rebellion broke out in Shimabara, and clans across Kyūshū were mobilized to repress the rebels. Iori was commanding officer of the Kokura clan forces, later being appointed hittō karō (the head retainer) to the clan.

In 1640, aged 59, Musashi became guest swordsman to the Kumamoto clan, also in Kyūshū. The following year, he presented a 35-article work on swordsmanship to the feudal chief, only to see the leader die a month later. Two years later, Musashi began writing Gorin no sho for the young successor to the feudal lord and his karō, completing the work a year and a half later—just a week before he himself died. Gorin no sho explains the warrior’s way of life, focused on training in swordsmanship, based on what Musashi had learned throughout his life.

Seeking to Discover a Universal Truth

Gorin no sho expounds the art of war in five volumes, systematically arranged under titles corresponding to the elements: Earth, Water, Fire, Wind and Void.

The Book of Earth describes the general framework of bushidō, the way of the warrior.

Bushi can refer both to individual warriors, and to a general who commands 10,000 men. One comes to understand how to fight through training in swordsmanship, and this also applies to battles. This text teaches the reader to train to apply his skills in any situation. The bushi should always carry two swords, and should train to wield two swords, with the battlefield in mind. In addition to the sword, he should also learn how to fight effectively with the lance, naginata (halberd), bow and arrow, and guns. A daimyō should be able to judge the strength of his underlings to deploy the most appropriate people in each position or place. The foundation of mastery of a way is to train, eschewing evil in one’s acts and thoughts. The warrior should broaden his perspectives through the arts and learn about the ways of society through familiarity with different professions. But he should also make objective judgments based on his discernment of various matters. He should consider that which cannot be seen, and be attuned to even the smallest details. The warrior should always make himself useful, while devoting himself to his path of training. These teachings were to apply to all paths of training.

The Book of Water explains the theory of the swordsmanship at the book’s core.

It describes the warrior’s spirit, his attitude, and his expression as foundational to the art of war, and therefore urges him to make training part of daily life to be able to spring into action without hesitation. The tachi, or long sword, is taught according to five “attitudes” or postures—upper, middle, lower, right side, and left side—and the warrior should adopt the posture that enables him to readily strike his enemy. Miyamoto encourages the reader to pursue the “way of the long sword,” being always at the ready to best strike his opponent in five kata—forms encapsulating the ideal way to deflect an opponent’s attack and defeat him—based on these five attitudes in order to hone his senses. Training should not follow fixed patterns, but should involve adopting postures to strike the enemy, training so as to gain a clearer sense of the way of the long sword. The warrior should “train for a thousand days, then practice for ten thousand” while aiming “today, to defeat the self of yesterday; tomorrow, to unskillfully defeat the opponent; and thereafter, to defeat opponents with skill.” He should practice daily with the aim of perfecting his techniques—training requires decades of disciplined repetition.

The Book of Fire discusses the theory of war.

First it is important to know the direction of light on the battlefield, to understand conditions on the ground, and to identify obstacles, in order to use them to one’s own advantage and to the enemy’s disadvantage. Know the enemy, striving to prevent him from exercising his strengths, then attack his weaknesses. It teaches the warrior to curtail his opponent’s techniques, to be poised ready for the enemy to strike, so as to be able to strike back, but not to let him land a blow. One should take the opposite approach to one’s opponent to overcome him. Also, a warrior should battle psychologically—annoying, confusing, or disturbing the composure of his enemy—then, when his foe sees that defeat is imminent, the warrior should attack and defeat him. When fighting against a horde, he should maneuver himself to obtain the initiative, striking enemies where they are doubled up. If your ploy does not succeed on the second try, then change the attack on the third. The warrior ought to strike boldly, with prudence, never letting his guard down, in order to finally be victorious.

The Book of Wind criticizes the error of other teachings and confirms the correct way.

It encourages the readers to always pursue universal principles. They should not be tied down by outward forms of postures and training, but should adopt the most effective stance against each enemy, fighting in conformance with the way of the long sword. Miyamoto repudiates esoteric teachings, encouraging teaching that is not fixed but rather is adapted for each learner’s understanding and mastery. His teaching considers each pupil’s comprehension in teaching the correct way, helping the learner to discard bad habits and assumptions, so each student will adopt the true way of the samurai, building a spirit free from doubt.

The Book of Void describes the way of discipline and the ideal way for the warrior to live.

One’s various misunderstandings are caused by prejudices. It is therefore important to be conscious of the “void” to be able to always correct one’s ways. The warrior should constantly seek to improve his skills, and also to train body and spirit, in order to attain a state of inner clarity, without any doubts to cloud the mind. This state is the “true void.”

In his younger years, Miyamoto Musashi saw victory in more than 60 actual life-and-death battles, but he also sought to discover a more universally applicable way of the warrior, tirelessly pursuing rationality, with a prudent approach in all matters. Gorin no sho, the legacy he bequeathed to posterity as the culmination of his mastery, describes the true way of living for samurai based on specific training guidelines. Even today, nearly 400 years later, it teaches us the universal essence of the pursuit of any path of mastery.

(Originally published in Japanese on June 13, 2019. Banner photo: A five-scroll transcription of Gorin no sho by one of Musashi’s disciples. There is no known manuscript by the author himself. Courtesy of the Eisei Bunko Museum.)