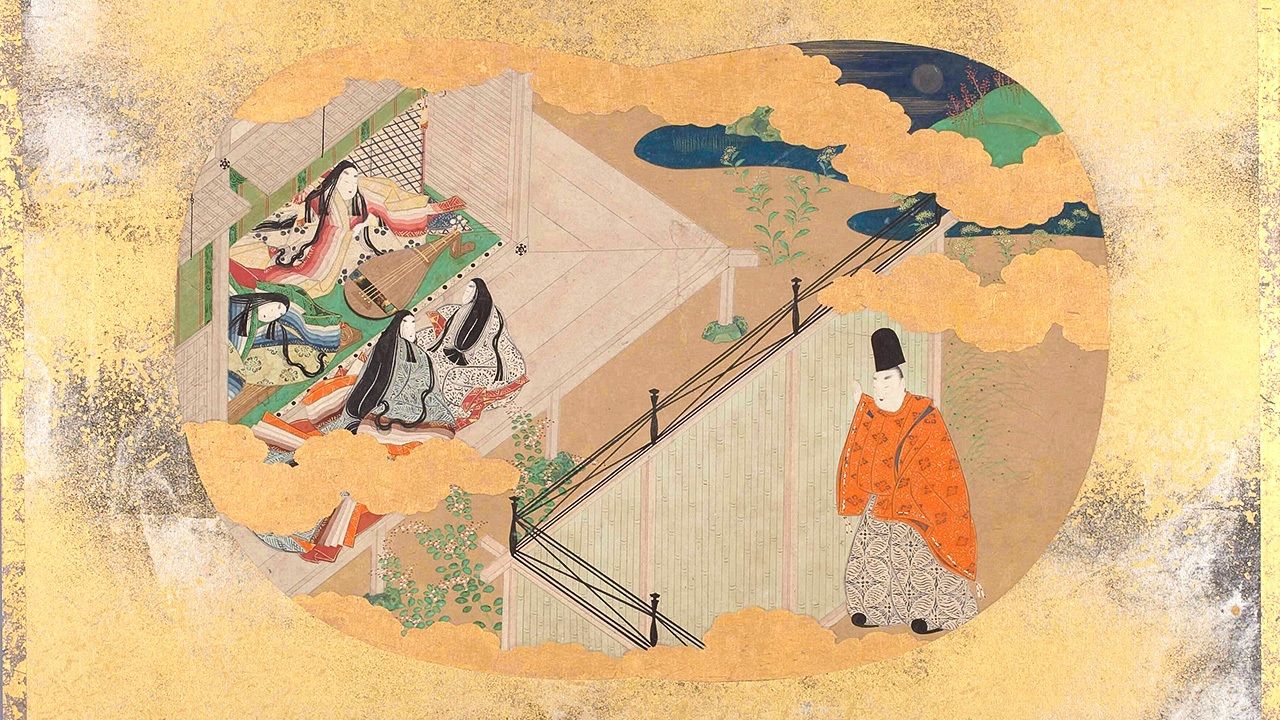 The Evolution of “The Tale of Genji”

Culture Sep 20, 2019
Over the centuries since it was written, The Tale of Genji has found ongoing relevance through the new interpretations of critics reacting to the spirit of the age.

A Tenacious Ability to Thrive

In the 1,300-year history of Japanese literature, The Tale of Genji stands out as a seminal, quintessential work, and it has become a part of the lives of the Japanese people.

It has had to show a tenacious ability to thrive, however. Usually dramatic changes to the environment bring extinction to lifeforms that are unable to adapt. The classic example is the dinosaurs. In the same way, works of literature that were considered the cultural pinnacle of their time may rapidly fall out of fashion in the succeeding era as societal values and political and economic systems undergo major transformation.

Created at the height of aristocratic political dominance at the turn of the eleventh century, when there was still no developed monetary economy, Genji has nonetheless found readers through years of peace and bloodshed, samurai rule and democracy, and capitalism and information technology.

The story’s secret to ongoing relevance lies in its many cultural “mutations.” Its text has remained the same, naturally, but readers’ desires and the messages they have sought to find in the work have changed with the ages. And Genji has always succeeded in conveying new messages through the fresh interpretations developed by its close scholars, thereby adapting itself to the upheavals of history.

From Aesthetics to Politics

The first big change for Genji came in the thirteenth century, 200 years after it was written, with the textual overhaul of Fujiwara no Teika (1162–1241), an authority on waka poetry. In a time without printing technology, the work had been repeatedly copied by hand and there were significant differences between the various versions. An authoritative form was needed for Genji to be culturally influential. Teika’s efforts fixed the content and the order of the 54 chapters, making Genji a classic that could be read and reread, and sparking research that would provide new ways of understanding the work. 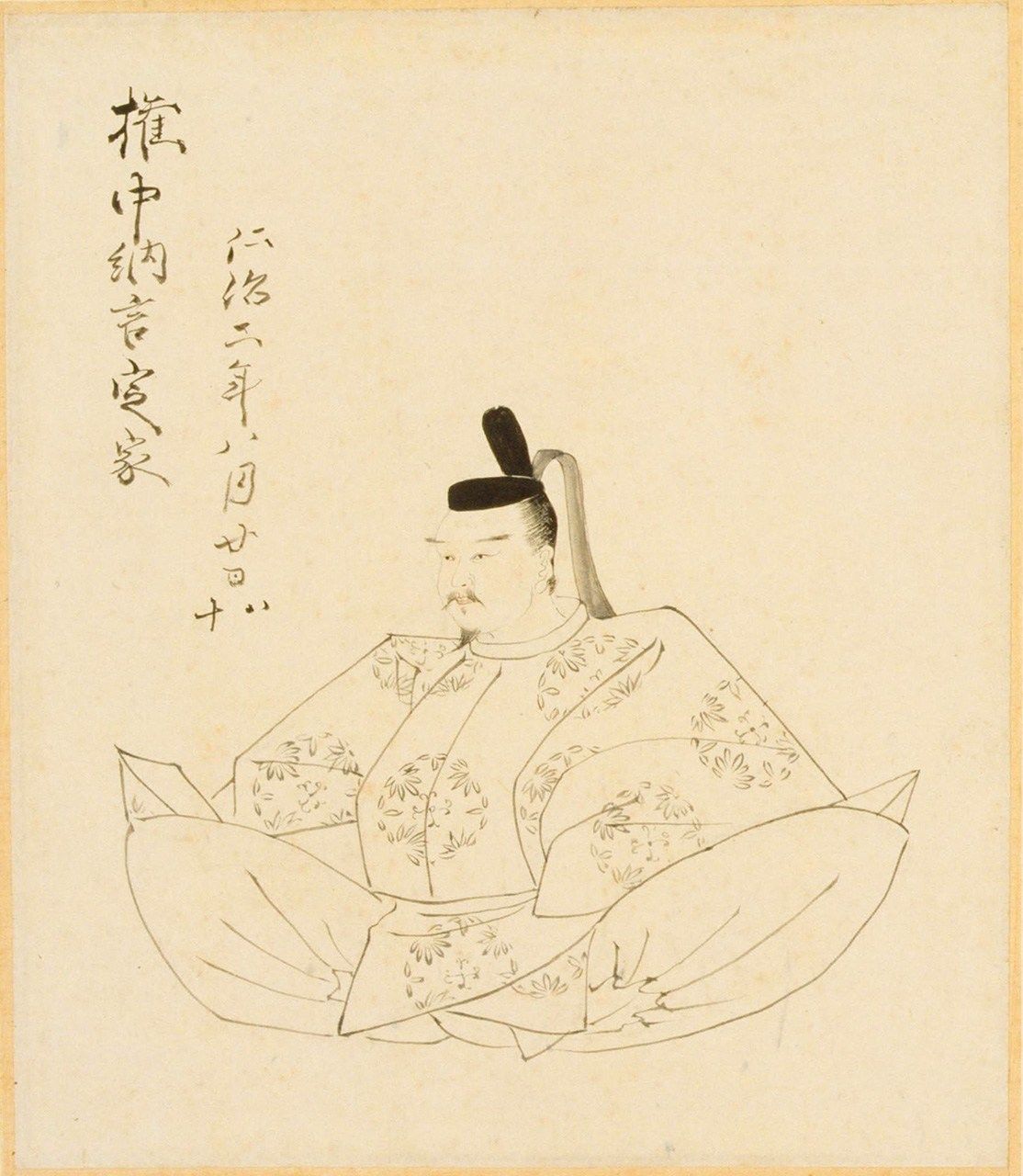 A portrait of Fujiwara no Teika by Kurihara Nobumitsu. (Courtesy National Diet Library)

Teika himself saw beauty as the central theme. He lived at the turbulent opening of Japan’s medieval era, when samurai warriors used force of arms to seize power. The editorial work of Teika, an aristocrat, revived a lost vision of the miyabi (refined elegance) of the imperial court.

He is also famous for compiling the famous Hyakunin isshu anthology, which includes 100 waka by 100 poets, most of whom lived in the courtly Heian period (794–1185). In his chaotic age, Teika’s own graceful, refined poems deploying the polished vocabulary of Genji allowed him to build an ideal world that transcended reality.

Some 250 years after Teika, the poet Sōgi (1421–1502) emerged. His vagabond reputation would win him the admiration of a later poet known for his travels, the haiku master Matsuo Bashō (1644–94). Sōgi lived into the Warring States period (1467–1568), when warlords battled over a fractured country and Japanese society entered even greater turmoil. 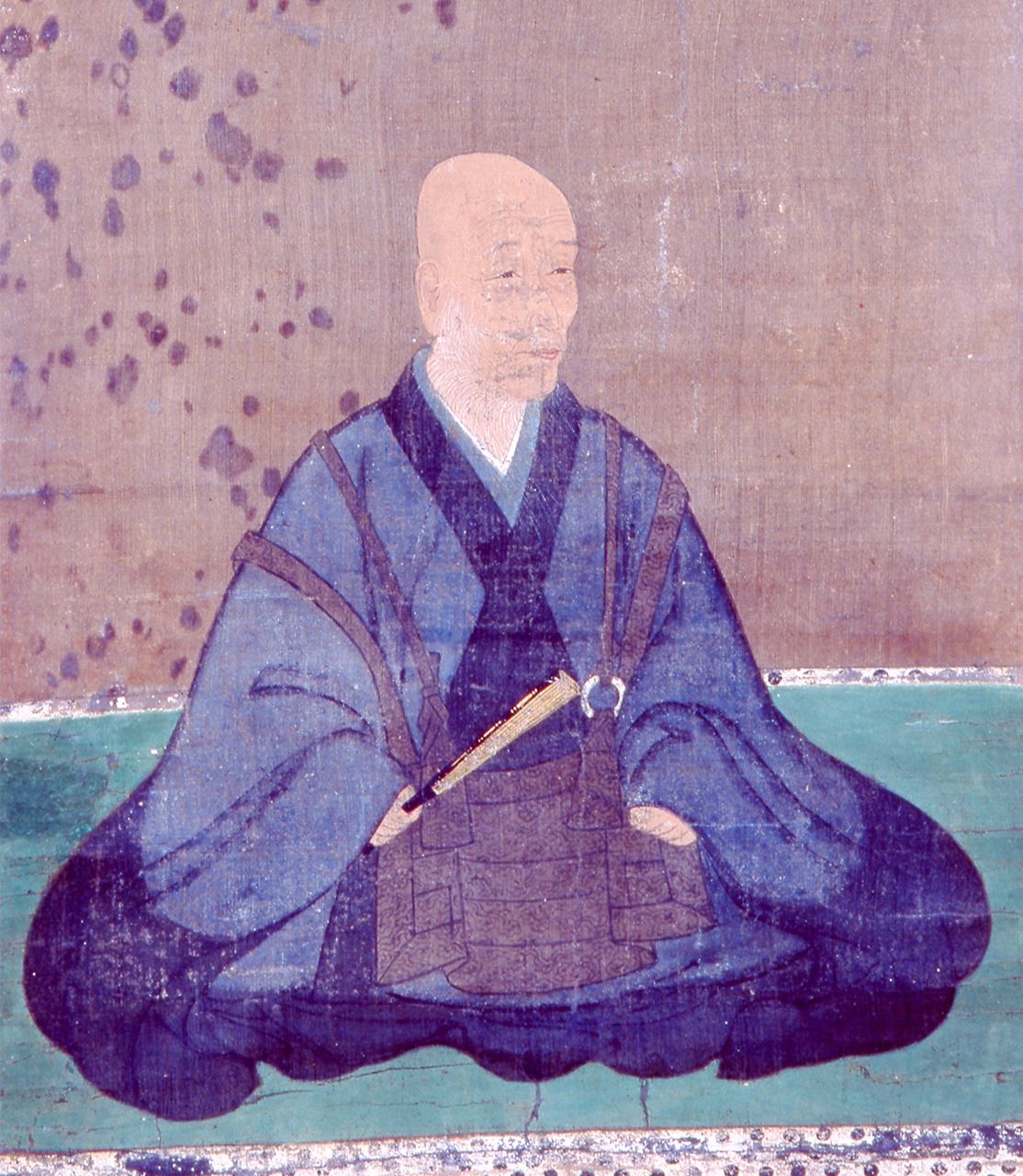 The watchword of the time was gekokujō, literally “the low overthrowing the high,” expressing how vassals toppled their lords and children drove out their parents. Traditional deference to masters and fathers was in tatters, and the prevalence of political marriage even brought an absence of trust between husbands and wives.

In this war-torn land, where human relations had broken down, Sōgi offered heartfelt prayers for the return of an ideal society with harmonious bonds between married couples, families, friends, lords and retainers, and teachers and students. He found these ideal relations—including those between rulers and the people—in Genji, which he considered to be the work’s greatest message.

Rather than a book on aesthetics, Sōgi saw Genji as a political primer necessary for achieving peace and understanding. It is the same principle as that behind this year’s choice of Reiwa (“beautiful harmony,” according to the official government translation) for Japan’s new era name.

A century after Sōgi’s death, and around six centuries after Genji was written, Japan achieved its much-wished-for “lasting peace.” Historians compare the Edo period (1603–1868) under the Tokugawa shogunate to the Pax Romana of ancient times.

Edo society sought stability by introducing four classes—samurai, farmers, craftsmen, and merchants—and ordinary citizens were able to lead peaceful and cultural lives. The atmosphere of the capital Edo filtered into the daily routines of the people.

The height of the “Pax Tokugawa” was in the Genroku era (1688–1704). The leading Genji authority of the time was Kitamura Kigin (1624–1705), who was also a mentor of Bashō. The teachings of Sōgi were passed down to him in a special initiation ceremony. 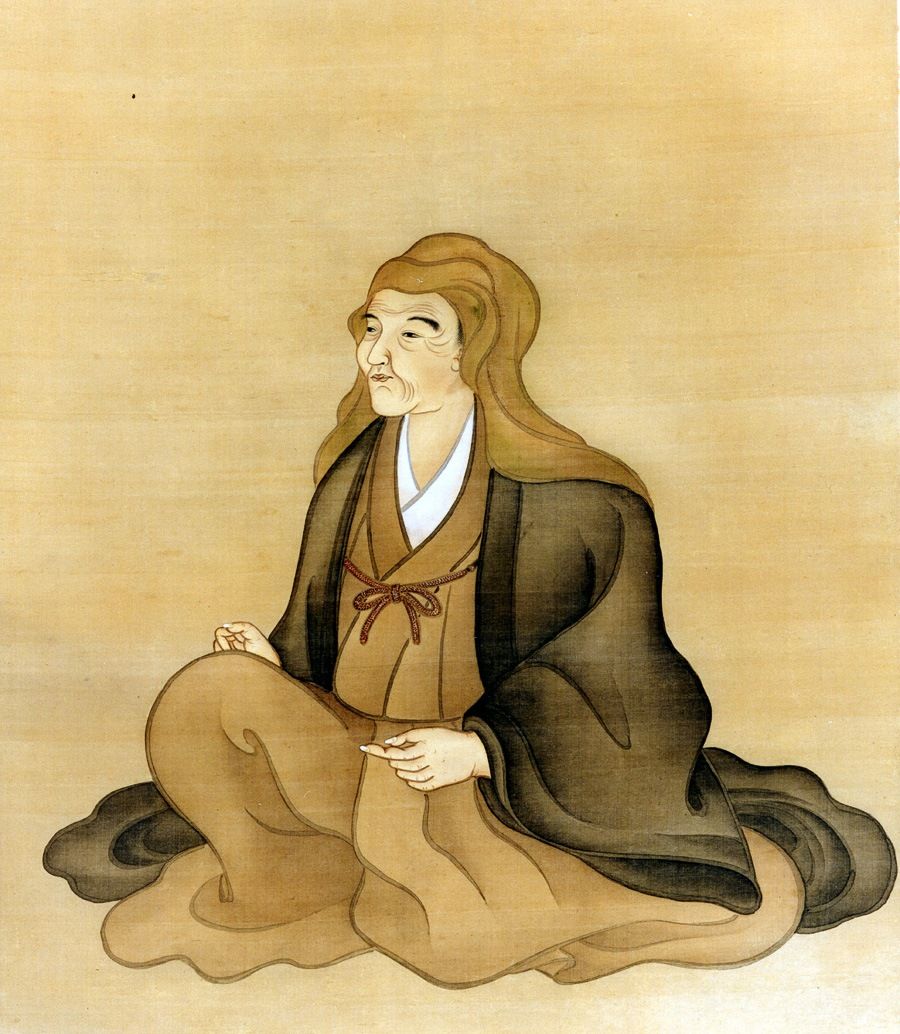 Kigin incorporated the changes in perspective from Teika to Sōgi, drawing up an interpretation that saw Genji as both a text on political administration, showing trust between leaders and the people, and a book of ethics, demonstrating how to live correctly. Under this interpretation, the story became a guide for people who desired peace, telling them how they could live better in this world and reach paradise through a fitting death.

It was around a century later that a new, influential reading contradicted the idea that Genji dealt primarily with politics and ethics. The scholar Motoori Norinaga (1730–1801) posited that its central theme was mono no aware. This phrase, literally meaning something like the sensitivity we have for the ephemeral nature of our reality, signifies a form of pure emotion that humans lose the ability to express as they acquire culture in the form of knowledge and morality.

For example, the title character in Genji loves Fujitsubo deeply, but she is the wife of his father, the emperor, and their relationship is taboo. Nonetheless, Genji refuses to give her up and she becomes pregnant with his child. He fights with all his strength against the ethical and legal barriers that stand in the way of his pure love. 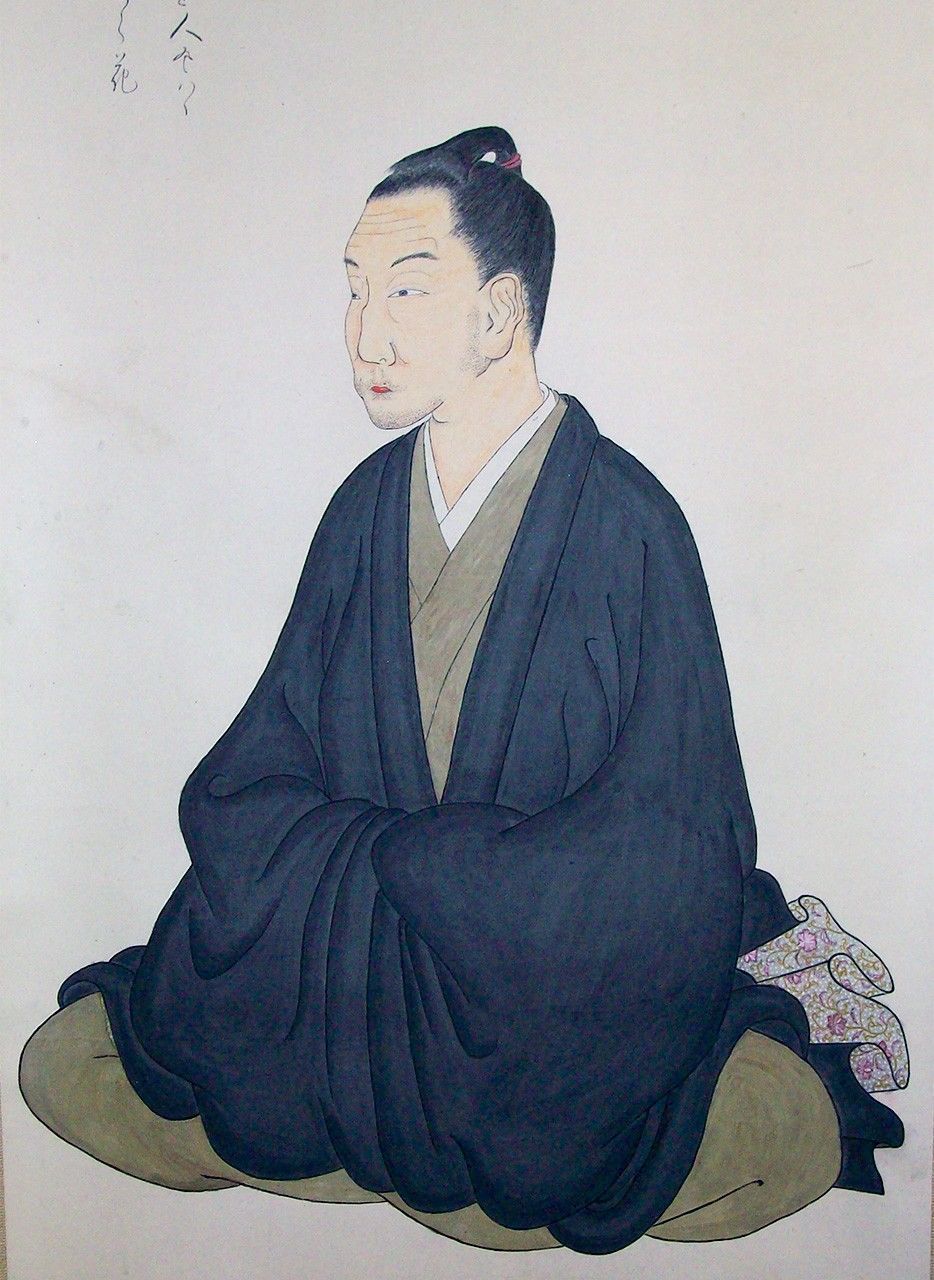 The field of kokugaku (national learning) developed by Norinaga fired up many activists in the last days of the shogunate, around the mid-nineteenth century. The “imperial loyalists” believed that the emperor should run the state himself rather than delegating this job to samurai leaders. This meant that they wanted to overthrow the shogunate and its ordered class system. The message the age took from Genji had changed from one of peace and harmony to Norinaga’s mono no aware. Rather than prizing stability, the loyalists advocated fighting for love and ideals. Equality was one of the mottos of the Meiji Restoration. One could say that Norinaga’s philosophy heartened the imperial loyalists, and helped open the door to the modern state.

Efforts continued from 1868 to find a newly fitting significance in Genji. The poet Yosano Akiko (1878–1942) focused on the suffering of the women loved by the protagonist. This was a new perspective compared with the male critics I have mentioned so far, who identified with Genji and took his position as a starting point. 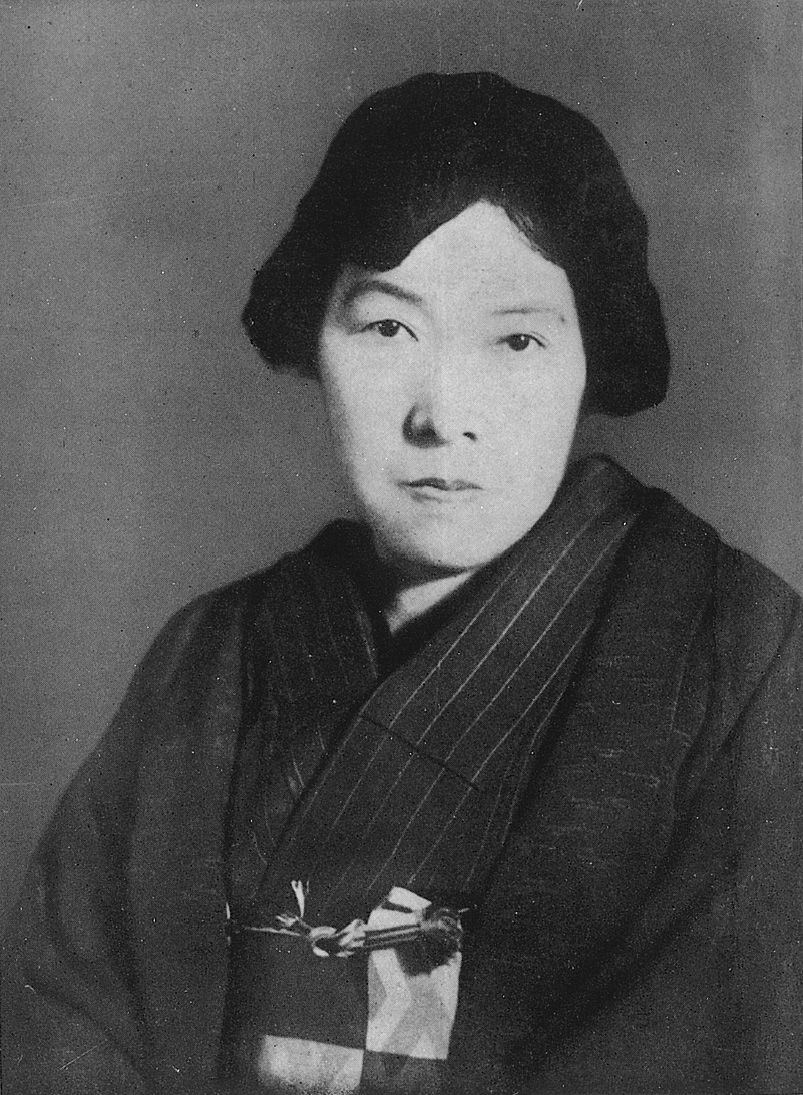 In the eleventh century, when Genji was written, it was normal for men to have multiple wives. Although Yosano lived in monogamous times, the suffering of love was the same, and she herself knew what it meant to be in a love triangle.

Whatever the law, what was marriage if it could not make women happy? Was love not enough of a basis for such a relationship? This was a question Murasaki Shikibu had herself pondered 900 years before. In reading Genji as a book about the hardship of women’s lives, instead of about peace or mono no aware philosophy, Yosano was returning to Murasaki’s viewpoint.

Yosano also helped widen the readership for Genji by translating it into modern Japanese, allowing readers to pick it up as easily as any other novel. Many other writers have produced their own contemporary versions of the classic in the twentieth and twenty-first centuries, including Tanizaki Jun’ichirō, Enchi Fumiko, Tanabe Seiko, Hashimoto Osamu, Setouchi Jakuchō, and Kakuta Mitsuyo.

In the early twentieth century, Arthur Waley also produced a wonderful English version, which seemed to convey the longing for rebirth in European society between the two world wars. Waley saw in Genji both the elegance of a mature civilization and a criticism of it that was imbued with a sense of crisis. It was a kind of modern synthesis of the interpretations of Teika and Sōgi.

With Waley’s translation, Genji became a part of world literature. People across the globe now have the chance to find their own meanings and guide to living in its story. 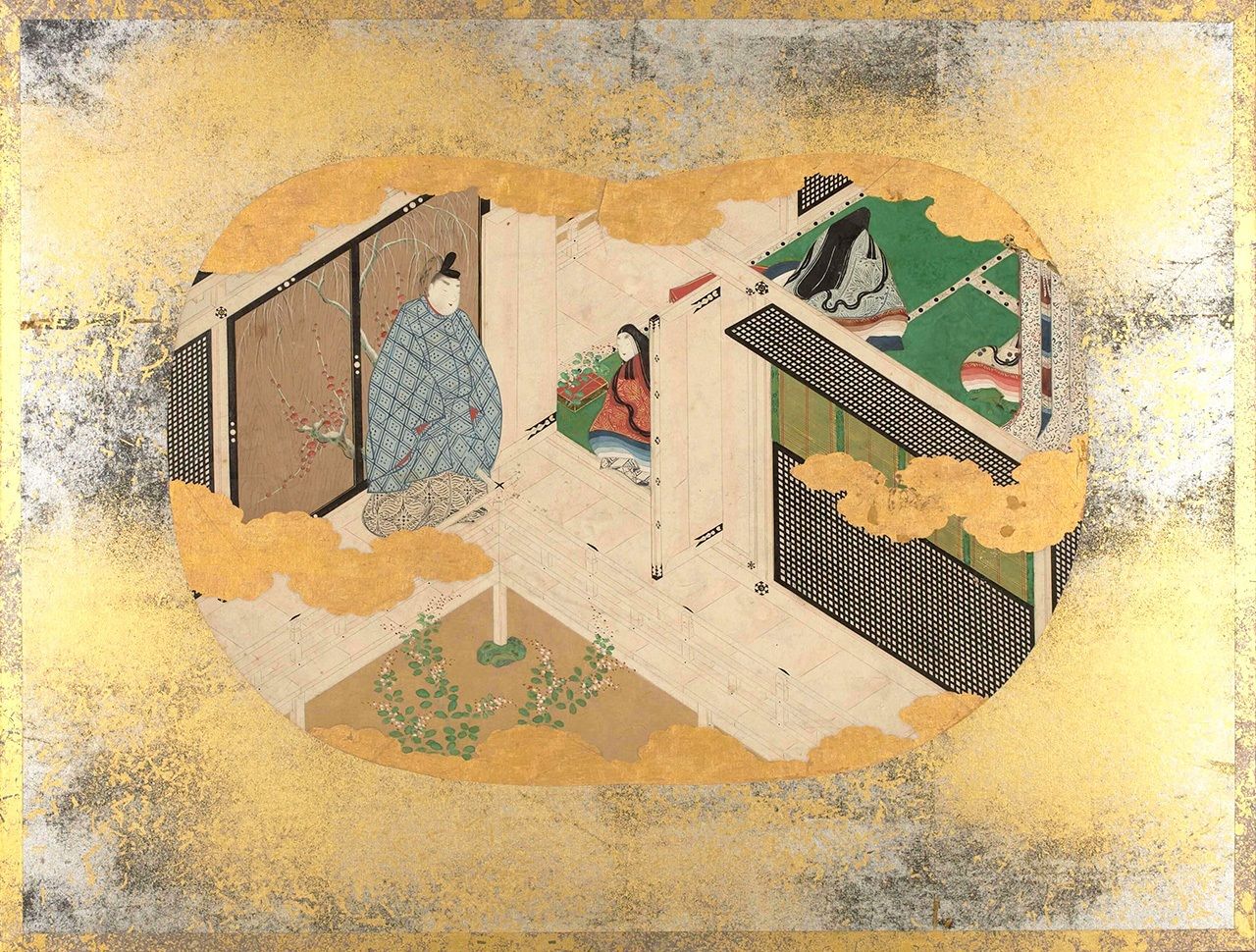 A scene from the chapter “Kagerō” (“The Mayfly”) from an album of The Tale of Genji pictures painted on fan shapes. (Courtesy National Institute of Japanese Literature)

(Originally published in Japanese on August 13, 2019. Banner image: A scene from the chapter “Hashihime” (“The Maiden of the Bridge”) from an album of Genji pictures painted on fan shapes. Courtesy National Institute of Japanese Literature.)