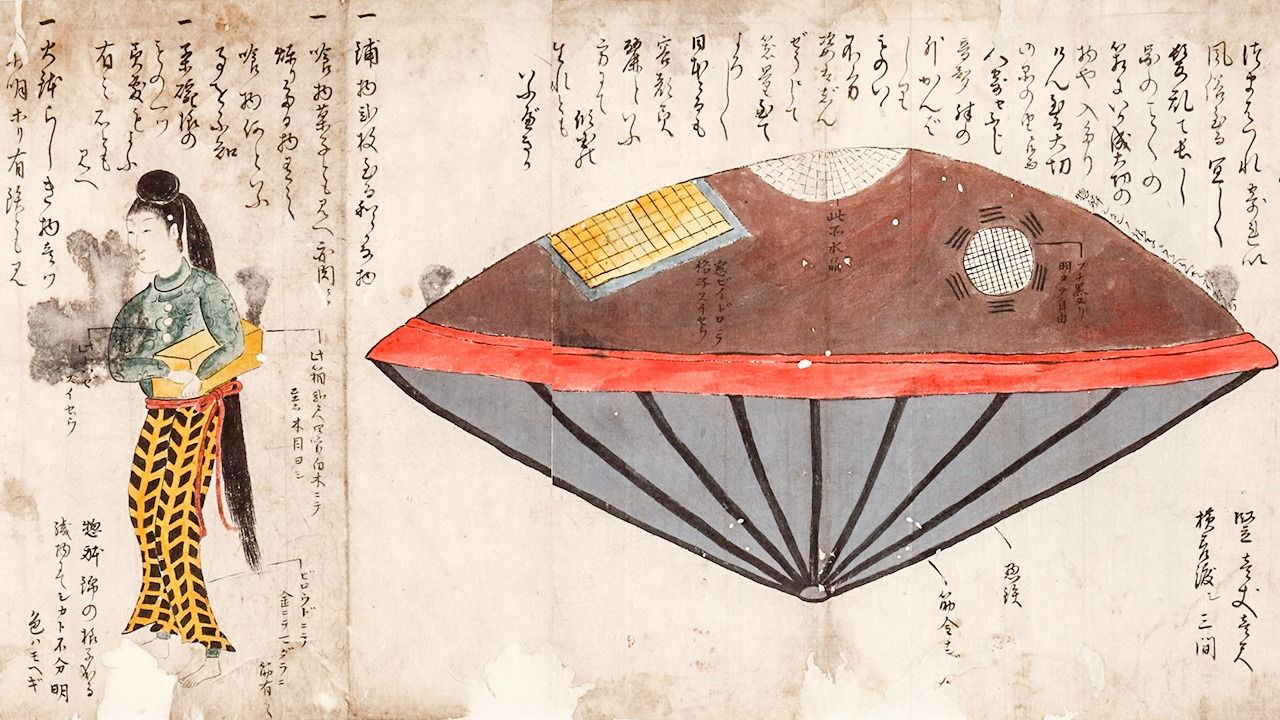 Culture Society History Jun 26, 2020
A mysterious event in Japan at the beginning of the nineteenth century shows surprising similarities with stories of UFOs. 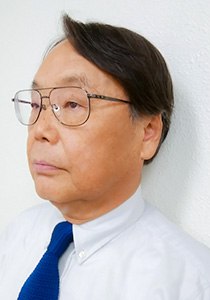 Professor emeritus at Gifu University. Born in 1947. Specializes in optical information engineering, but has also lectured on skeptical thinking. Leading researcher on utsurobune (hollow ship) legends. Published Edo utsurobune misuterī in 2009 under a pen name, which was translated and published in English in 2019 as The Mystery of Utsuro-bune.

In 1803, a round vessel drifted ashore on the Japanese coast and a beautiful woman emerged, wearing strange clothing and carrying a box. She was unable to communicate with the locals, and her craft was marked with mysterious writing. This story of an utsurobune, or “hollow ship,” in the province of Hitachi (now Ibaraki Prefecture) is found in many records of the Edo period (1603–1868), and Tanaka Kazuo, professor emeritus at Gifu University, has studied the topic for many years. What drew him away from his main research area, applied optics, to investigate this curious episode? And what really took place?

Tanaka says he began to research the ship after the deadly subway sarin attacks in 1995 by the Aum Shinrikyō cult. “There was a lot of coverage of Aum founder Asahara Shōkō's prophecies and claims to be able to float in the air. Yet the cult’s senior members were part of the scientific elite. I started giving lectures considering paranormal phenomena from a scientific perspective, which meant that I was collecting all kinds of materials for teaching, such as about UFOs in the United States and Japanese folklore. While doing so, I came across the utsurobune legend.” He adds, “Long before the American UFO stories, the craft depicted in Edo-period Japanese documents for some reason looked like a flying saucer. This was fascinating to me.”

UFOs became a modern sensation after the media reported US businessman Kenneth Arnold as having witnessed “flying saucers” on June 24, 1947. A flood of similar stories followed from around the world. Most famously, a UFO was alleged to have crashed to the ground near Roswell, New Mexico, in July 1947. “In the end, though, no wrecks or alien bodies were recovered,” Tanaka says. “There was only the ambiguous testament of witnesses. It was the same with all the other UFO stories from around the world—they were mysteries without any substantial evidence. The utsurobune legend, however, has a number of documents to examine as leads, so in this sense, for researchers it’s a mystery with substance.” 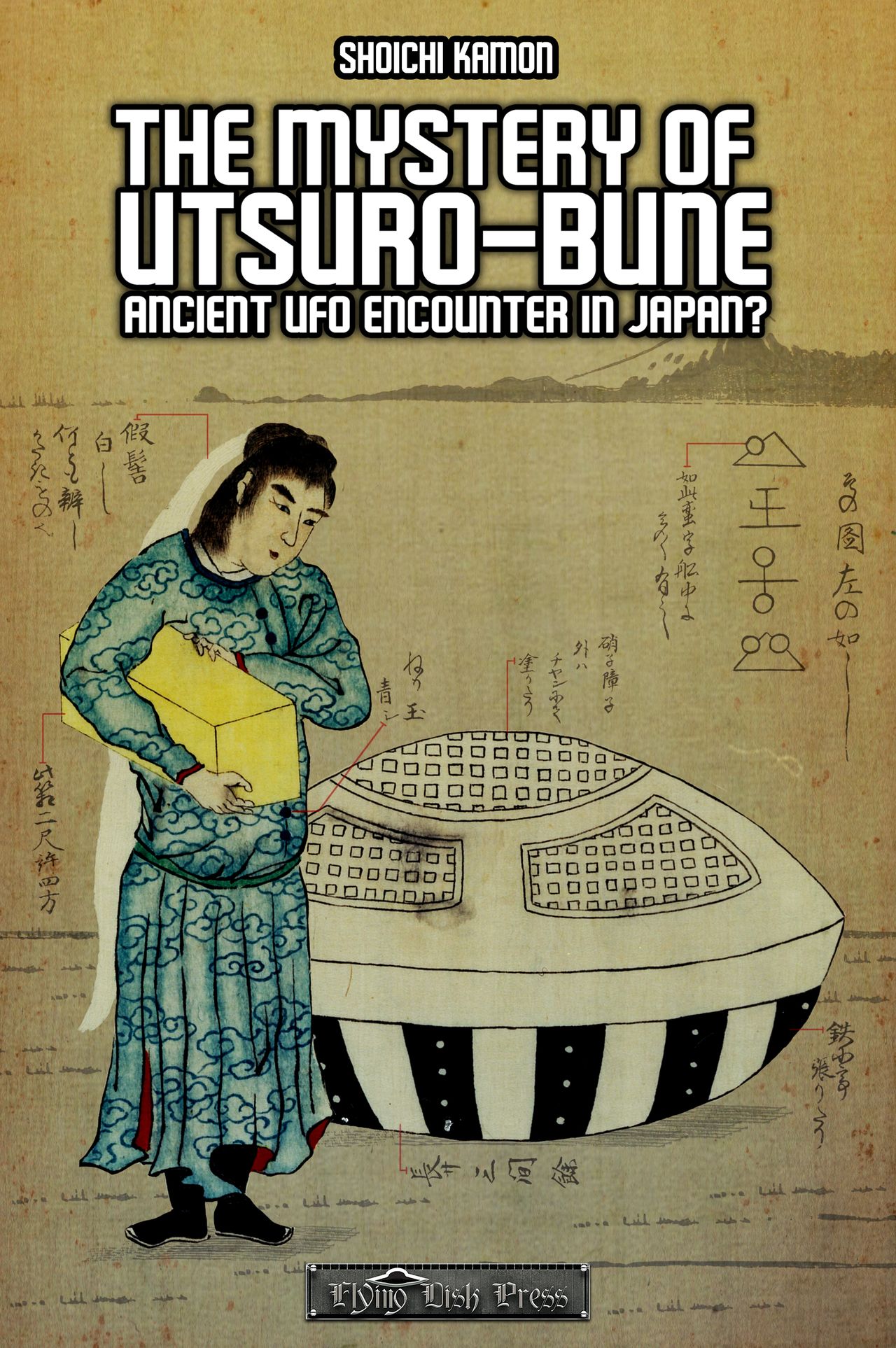 A book published in English by Tanaka Kazuo on his research. The cover uses the illustration from Toen shōsetsu (Toen Stories; 1825).

There are similar oral traditions about “hollow ships” across Japan in the Edo period. Tanaka’s research is focused on the various documents that describe the 1803 incident in Hitachi and include illustrations of a beautiful woman and a strange vessel, although they cite different dates. One of the best-known sources is the Toen shōsetsu (Toen Stories), an 1825 collection recording fantastic rumors, which was written by the Toenkai literary circle and edited by Kyokutei Bakin, famous for his lengthy historical romance Nansō Satomi hakkenden (The Eight Dog Chronicles). Others are Nagahashi Matajirō's 1844 work Ume no chiri (Plum Dust), as well as collections like Ōshuku zakki (Ōshuku Notes), Hirokata zuihitsu (Essays by Hirokata), and Hyōryūki-shū (Records of Castaways), which gathers stories of foreign ships washed up in Japan and of Japanese sailors who came ashore overseas. 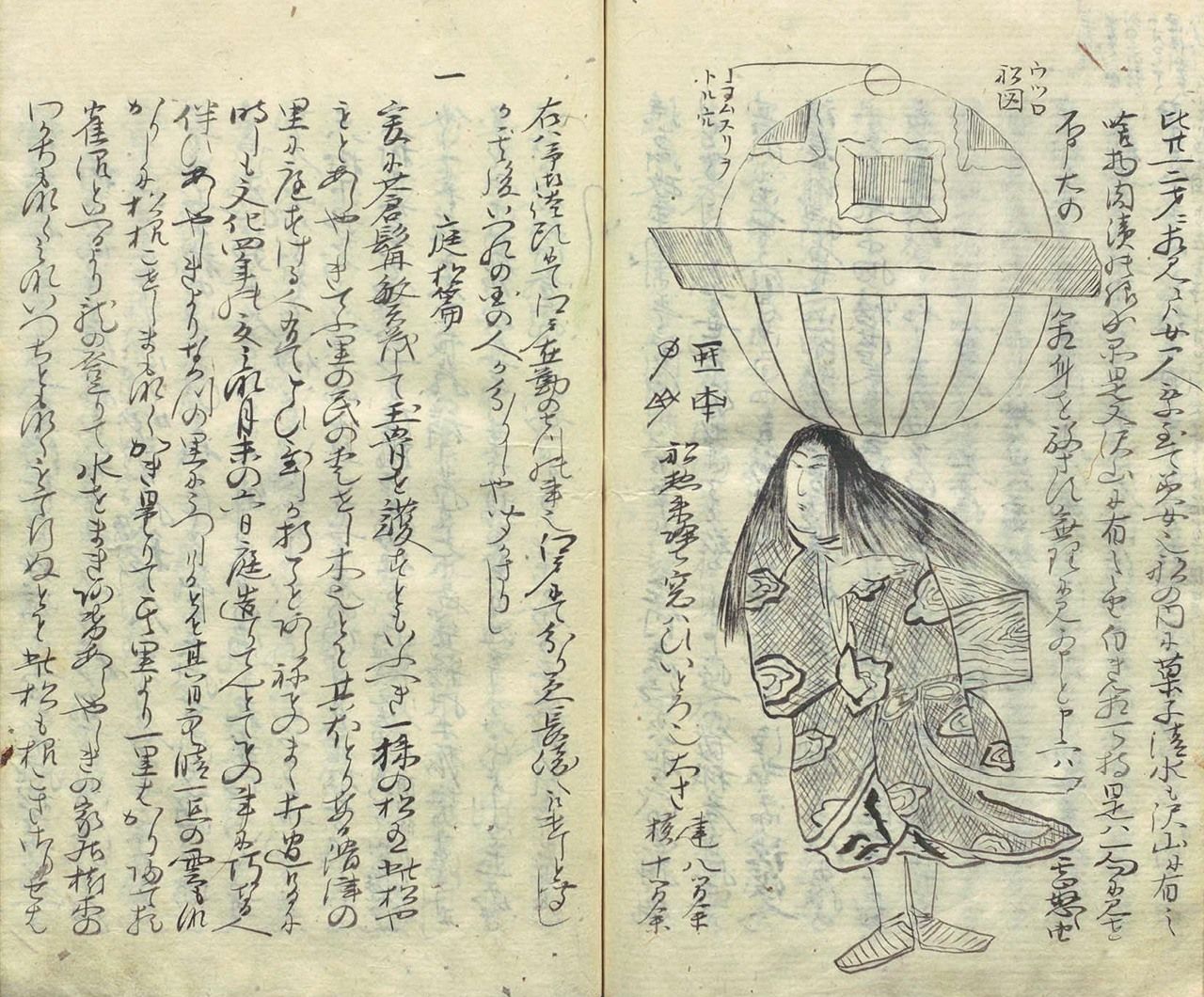 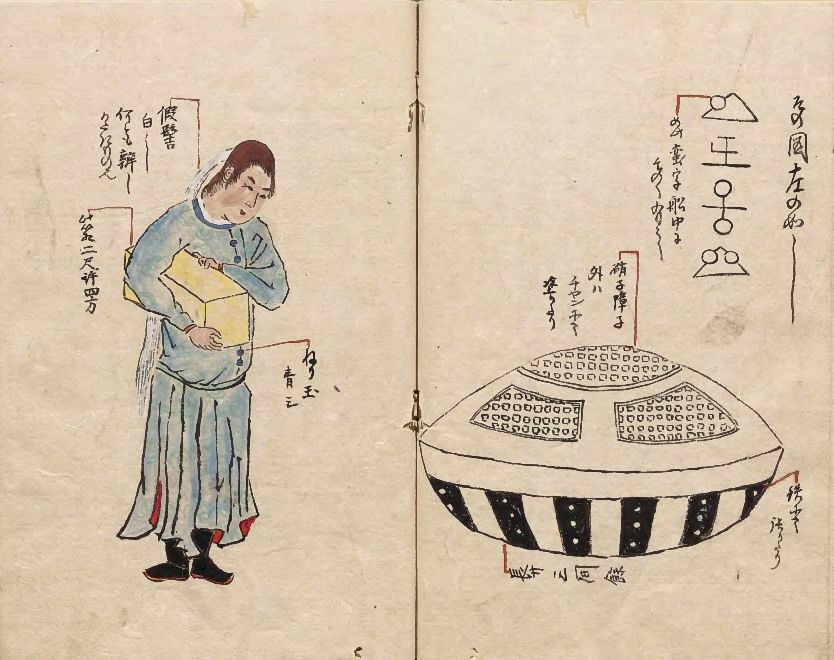 From Hirokata zuihitsu (Essays by Hirokata; 1825) by shogunate retainer and calligrapher Yashiro Hirokata, who was also a member of the Toenkai circle. (Courtesy National Archives of Japan) 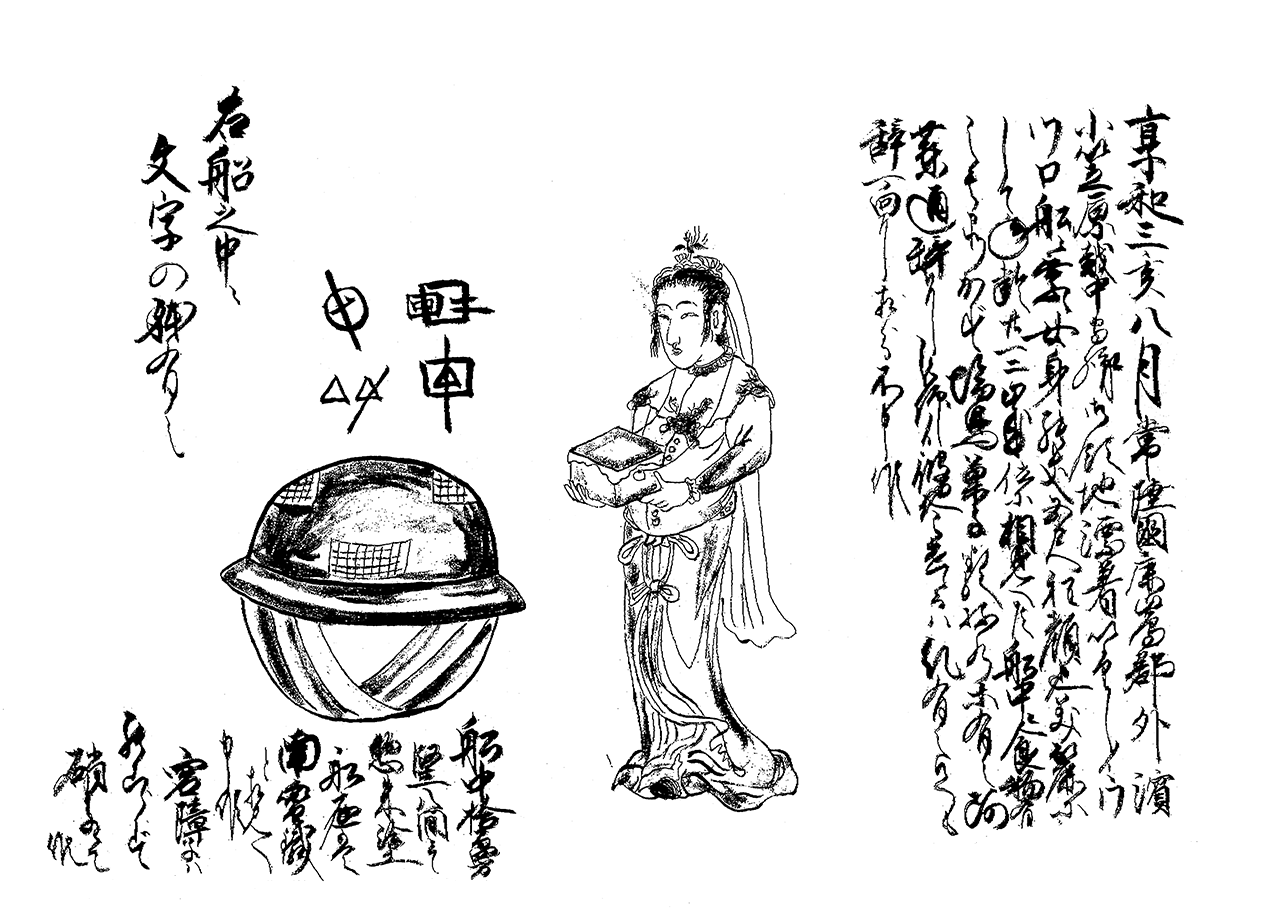 At first, Tanaka theorized that the incident was an embellished account concerning a shipwrecked Russian whaler, but he could not find any mention of such a disaster in official records. Instead, he discovered new materials, becoming absorbed in further background research. To date, he has found 11 documents relating to the Hitachi utsurobune legend, of which the most interesting are thought to date from 1803, the same year that the craft was said to have come to shore.

One is the Mito bunsho (Mito Document) owned by a collector in Mito, Ibaraki Prefecture. Tanaka noticed that the woman’s clothing in an illustration in the work was similar to that of a bodhisattva statue at the Shōfukuji temple in Kamisu, also in Ibaraki, which is dedicated to the raising of silkworms. A legend credits the start of sericulture in the area to a Princess Konjiki (or “golden princess”), who is a motif in images at the temple. In one version of the story, Princess Konjiki is washed up to shore after traveling from India on a dugout boat in the shape of a cocoon. She repays the kindness of a local couple who try to nurse her back to health by bestowing on them the secrets of sericulture when she herself becomes a silkworm after her death. Among the various materials, only the illustration in the Mito document appeared greatly similar to Princess Konjiki. Tanaka thinks that when the first rumors of a “hollow ship” coming ashore at a beach called Kashimanada were spreading, the people at Shōfukuji may have decided to incorporate it into promotion of the temple.

Another even more important source is the Banke bunsho (Banke Document) owned by Kawakami Jin’ichi, the heir to the Kōka ninjutsu (ninja arts) tradition and a ninjutsu researcher and martial artist. It is named after the Banke, or Ban family, of Kōka ninja. While some other materials say the vessel came ashore at locations like Harayadori or Haratonohama, there is no evidence that such places exist. This document, however, records the location as Hitachihara Sharihama, which appeared in a map produced by the famous cartographer Inō Tadataka, and is now known as Hasaki Sharihama in Kamisu. Tanaka comments that while the other materials show geographical inconsistencies, this document mentions a real place name. He says that Kawakami suggested a Banke member might have been assembling information while working for the head of the Owari domain (now Aichi Prefecture). “If so, he wouldn’t record any untruths, so we can say the document is very reliable.”

The folklorist Yanagita Kunio once said that all of the utsurobune legends were groundless fictions. “But in the case of the Hitachi utsurobune, there’s a clear difference from other stories around the country,” Tanaka says. “For one, it’s specified as having taken place in 1803. And then, it’s strange that there are specific pictures of the craft showing it as resembling a flying saucer. I feel it was probably based on something that really happened. But Japan was largely closed off then, so if there was a wreck of a foreign ship or foreign people had arrived in the country, it would have been a huge event and a government official would have investigated and left a public document. When British sailors entered Ōtsuhama [now Kitaibaraki] in 1824, it became one of the causes of an edict to repel foreign vessels the following year. So it might be that there was witness testimony of something taking place for just a short time at Kashimanada. It’s possible that this became tied in with earlier utsurobune legends.”

Just as descriptions of the woman’s clothing vary depending on the document, so do those of the shape and size of her vessel. For example, Records of Castaways says that it was around 3.3 meters high and 5.4 meters wide (when converted into current measurements) and that it was made of rosewood and iron with glass and crystal windows. “I’m not sure whether Records of Castaways was an official document. There are two volumes altogether, and apart from the utsurobune, they’re all incidents that actually took place. This suggests that the writer at least believed the utsurobune was really washed up to shore,” Tanaka says.

There are countless mysteries connected with the “hollow ship,” such as the meaning of the script written inside it. Tanaka says that one theory has it that it resembles the pseudo-Roman letters sometimes seen in the border of ukiyo-e prints. “So it might be simply decorative. Although it’s not impossible that we’ll discover evidence that it’s alien script!” Having said this, he laughs. “There are likely to be further discoveries of currently unknown materials related to the utsurobune, and new revelations. This legend is so appealing because it’s possible to come up with so many different theories. Having a story like this in Japan—from 140 years before the American UFO sightings—that stimulates the imagination to this extent reminds me of how deep and fascinating Japanese culture can be.”

From Hyōryūki-shū (Records of Castaways) by an unknown author. The text describes the woman as being around 18 to 20 years of age, well-dressed, and beautiful. Her face is pale, and her eyebrows and hair are red. It is impossible to communicate with her, so it is unclear where she is from. She holds a plain wooden box as though it is very important to her and keeps her distance. There is mysterious script written in the boat. (Courtesy Iwase Bunko Library in Nishio, Aichi Prefecture)

(Originally published in Japanese on June 17, 2020, based on an interview by Itakura Kimie of Nippon.com. Banner photo: Detail from Hyōryūki-shū (Records of Castaways). Courtesy Iwase Bunko Library in Nishio, Aichi Prefecture.)