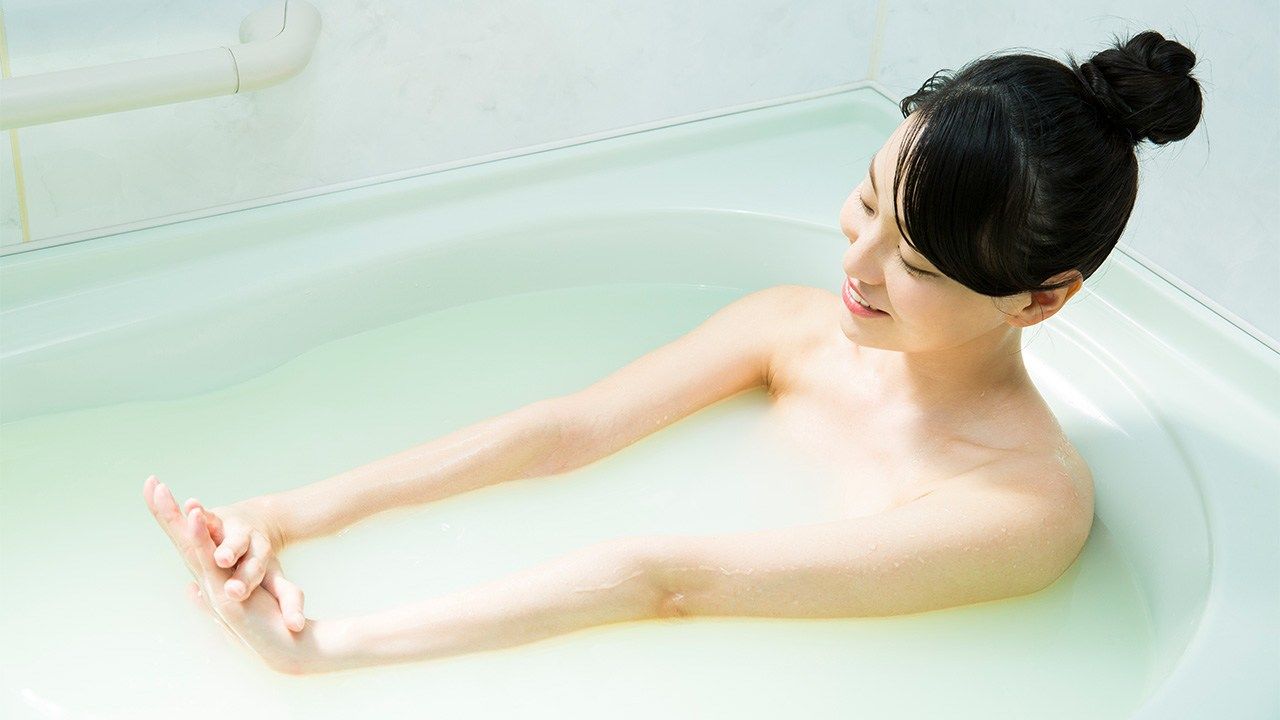 A Dip a Day: The Surprising Health Benefits of the Japanese Bath

Lifestyle Culture Health Sep 29, 2020
The Japanese take more hot baths than any other people in the world. Bathing has been an important part of Japanese culture since ancient times. Today, there is growing evidence that the custom of regular bathing in hot water is part of what makes the Japanese one of the healthiest and longest-lived populations in the world. One of Japan’s leading researchers on the science of bathing is Hayasaka Shin’ya, who has been studying the health benefits of hot springs for more than 20 years.

The Relaxing, Health-Giving Properties of a Hot Bath

Many Japanese people take a bath more or less every day. In some parts of the world, people may refer to showering as “taking a bath,” but not in Japan. In Japan, simply showering does not count. In Japanese, the phrases nyūyoku (bathing) or ofuro ni hairu (to take a bath) normally involve immersing the whole body in a tub of hot water. Research suggests that whereas people in many parts of Europe and America now make do with just a shower nearly 90% of the time, in Japan between 70% and 80% of people still bathe in the traditional way at least several times a week. This rises to 90% or more in families with small children. The proportion of the population that rarely or never takes a bath, relying on showers alone, is just 10%. It is no exaggeration to say that in Japan the hot tub is king.

Bathrooms in Japanese homes—which are kept totally separate from the lavatory—normally contain a bathtub deep enough to immerse the whole body. Next to the bath itself is a spacious area for showering and washing before getting into the tub. The normal practice is to wash thoroughly with soap and shampoo before getting into the tub. This means you get clean before getting into the bath, and most households reuse the same tub of hot water until the whole family has had a soak. Apparently, this practice sometimes strikes people from other cultures as unhygienic, but in fact nothing could be further from the truth. The tub is not a place for washing: it is a place to enjoy a soothing soak. Small children often bathe with their parents, making the ofuro a place for family bonding as well as relaxation.

For the past 20 years, I have carried out surveys and research on bathing practices as part of the Japanese lifestyle from a medical perspective. I know of no other country in the world where almost the whole population bathes like this on an almost daily basis. Researchers around the world publish countless papers every year on all aspects of health: exercise, diet, sleep, and so on. But almost nothing has been published on the health benefits of hot water bathing. The reason, I think, is simple: In most countries, the custom simply does not exist.

A Land of Hot Springs

Since so many Japanese people take a bath more or less every day, it is not surprising that between 80% and 90% of people responding to a survey carried out by Jiji Press in 2004 answered that they “enjoyed” taking a bath, or liked it “very much.” The reasons for this deep-rooted popularity can be traced to the country’s geography.

As a volcanically active country, Japan is rich in natural hot springs. This made access to hot water easy from ancient times and helped establish bathing at the heart of Japanese culture from an early stage. There are around 27,000 hot springs, or onsen, in Japan—an impressive number for a relatively small country. In fact, it’s exceptional: In other countries, even those with a relatively large number of hot springs, the equivalent figure is in the hundreds. The number in Japan is orders of magnitude larger. This geothermally rich natural environment provided easy access to ready supplies of hot water, and must have encouraged the practice of bathing from an early stage. The Nihon shoki, an early historical chronicle, records that the emperor was already bathing in the country’s hot springs as long ago as 1,300 years ago. Today, hot water is readily available at the turn of a tap, but even in the developed world this was not the case until the middle of the twentieth century. In the days before modern heating, it was difficult for people in parts of the world without abundant hot springs to obtain large quantities of hot water. This was presumably why the practice of hot-water bathing never caught on among ordinary people in many parts of the world.

The religious background may also have been a factor. Buddhism has been the main faith in Japan for most of its history, and many temples provided bathing facilities for lay people (called seyoku) as a form of charity. This may also have helped encourage the practice of regular bathing. In fact, the oldest bathing facilities in Japan were discovered in the precincts of the temple Tōdaiji in Nara, home to the famous Great Buddha. Several sutras also recommend regular bathing as a meritorious practice. This image of bathing as something virtuous may have helped the custom to be handed down as part of daily life through the generations.

The Health Benefits of Heat

In recent years, increasing evidence has shown the health benefits of this practice of regular bathing, so deeply rooted in the Japanese way of life. In 2018, I took part in a joint research project with Chiba University. We followed 14,000 elderly people over the course of three years. Our results showed that the risk of developing health problems requiring nursing care were approximately 30% lower for people who took a bath every day, compared to those who bathed only twice a week or less. In other words, the simple act of soaking daily in a tub of hot water can help to keep a person fit and healthy—without the need for physically tiring strengthening exercises.

Further evidence came in 2020, with publication of the results of a similar study by a group of researchers at Osaka who tracked the health of around 30,000 people over the course of 20 years. The study found that the risk of serious illness, including strokes and heart attacks, was nearly 30% lower in people who bathed every day compared to those who took a bath only twice a week or less. It seems increasingly likely that regular bathing might be one of the reasons for Japan’s high levels of health and longevity.

There are three main health benefits of bathing regularly: heat, buoyancy, and hydrostatic pressure. Of course, good personal hygiene and cleanliness is also beneficial for health, but this can be obtained just as well by taking a shower. For the other three, though, you need to immerse yourself in hot water.

The first benefit comes from raising the body temperature. For this, the water needs to be at least 38º Celsius. Soaking in hot water causes the arteries to relax and expand, boosting circulation. The blood brings oxygen and nutrition to all the cells in your body (as many as 37 trillion of them by some estimates) and carries away carbon dioxide and other waste products. It is this boost to the circulation that is responsible for the restorative feeling you get when you soak in the bath, as if the accumulated fatigue of the day is floating away on a cloud of steam.

Heat also alleviates pain. Warming the body to an appropriate temperature reduces the sensitivity of the nerves, and can help to improve the symptoms of backache, stiff shoulders, and other chronic aches and pains. Heat also softens the collagen-rich ligaments that surround the joints, making them more supple. This improves flexibility throughout the body and relieves joint pain. There is also substantial research supporting the adage that soaking in hot water two to three hours before bed can help to ensure a good night’s sleep.

But just because warmth is beneficial does not mean that the water should be scalding. It is not a case of “the hotter, the better.” Many studies in Japan have shown that bathing in very hot water (temperatures of 42º and higher) stimulates the sympathetic nervous system, part of the autonomic nervous system. This triggers a fight-or-flight response: the heart rate increases, blood pressure rises, and muscles tense. Since the purpose of taking a bath is generally to relax, these physical changes are precisely the opposite of what we are want. By contrast, bathing in water at a temperature of around 40º stimulates the parasympathetic nervous system, relaxing the body and soothing stress and tension. I generally recommend people in Japan to heat their bath water to a comfortable 40º or so. However, even this may be too hot for people from other countries, who have not been accustomed to bathing in hot water since childhood. A temperature 2 or 3 degrees cooler might be an ideal starting point for people in Western countries.

The benefits of buoyancy, meanwhile, come from the fact that your body is literally floating in water. If the water comes up to your shoulders, you are supporting just one-tenth of your usual body weight. A person weighing 60 kilograms is supporting just 6 kilograms of this weight while in the bath. This allows the muscles to rest, bringing increased benefits in terms of relaxation.

When you are immersed in a bath, the water surrounding your body brings you the third main benefit, exerting hydrostatic pressure on every part of your body. This is particularly beneficial for the legs and lower body, helping to alleviate swelling, as the blood from the engorged vessels returns to the heart and circulation improves.

People often ask me for advice based on my research. What is the best approach to bathing from a health perspective? The basic rule is simple: immerse yourself in a tub of hot water (around 40º, or slightly cooler for heat-sensitive bathers) and soak up to your shoulders for a good 10 minutes or so. When you start to feel a prickle of perspiration on your brow, that’s a good sign that your body has warmed up to the desired temperature. There is no need to worry about things or think difficult thoughts. The ongoing coronavirus pandemic is a time of stress and anxiety, meaning it has never been more important to make a hot bath a regular part of your daily routine. Taking a regular bath helps you to unwind physically and mentally and can help to keep you fit and healthy into old age.