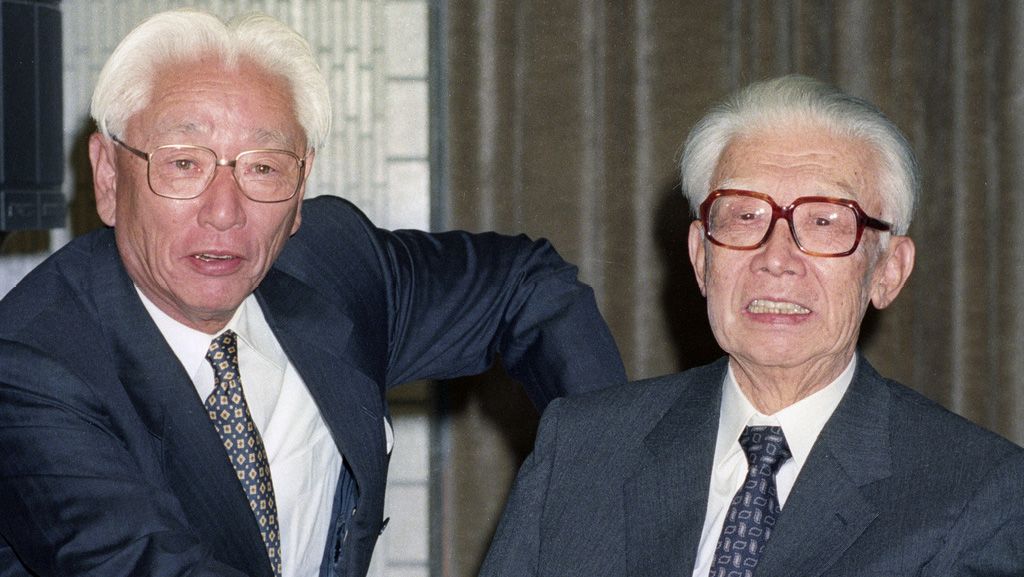 Sony’s Morita Akio: Marking 100 Years Since the Birth of a Japanese Business Legend

In December 2020, Ezra Vogel, famed US Japanologist and professor emeritus at Harvard University, passed away. Just a year earlier, in an interview with Mainichi newspaper’s Economist magazine, he lamented contemporary Japan’s loss of “hunger.” He spoke of the passing of the prominent entrepreneurs of postwar Japan, including Morita Akio, Honda Sōichirō, and Panasonic’s Matsushita Kōnosuke.

Vogel was best-known for his 1979 book Japan As Number One, which analyzed Japan’s miraculous postwar economic growth. No doubt Morita was one of the greatest symbols of the miracle Vogel wrote about.

This year marks the centenary of the birth of the late Morita Akio, born January 26, 1921. In May 1946, a year after the end of World War II, when he was just 25, he cofounded Sony’s forerunner, Tōkyō Tsūshin Kōgyō Kabushiki Kaisha (Tokyo Telecommunications Engineering Corporation) together with the 38-year-old Ibuka Masaru. Under their leadership, the small business transformed into global giant Sony.

Morita was initially in charge of marketing and administration, while Ibuka developed a succession of pioneering products that Sony released onto Japanese, then international, markets. By 1971, Morita had featured on the cover of the US magazine Time. He gained the nickname “Mr. Sony,” and came to personify Japan’s remarkable postwar economy.

The name “Sony” was the brainchild of Morita, who was adamant that the company name should be easy for people outside Japan to pronounce. He knew that neither Tōkyō Tsūshin Kōgyō nor its Japanese abbreviation, Tōtsūkō, would do.

He and Ibuka struggled to find a suitable name, finally settling on “Sony” in 1955. The name, registered in katakana, was officially adopted three years later. Today, it is not uncommon for Japanese companies to have katakana rather than kanji names, and to use Romanized logos, but at the time, there was opposition even from within the company. They were truly ahead of the times.

In 1999, while I was in New York, I happened to see a television program reflecting on industrial achievements of the twentieth century. Among a long list of American products that had helped shape the global economy of the modern age, I was astonished to see Sony’s video tape recorder mentioned. It was the only non-American product included.

The background to Sony’s emergence as a global brand includes a decisive episode that is now company lore. In 1955, the company developed the world’s second transistor radio, and a major US watch manufacturer offered to buy 100,000 units. Morita was initially impressed with the offer, given the scale of their business, but his excitement cooled when he heard the conditions of the deal: they would not sell the radios under the unknown brand Sony, insisting the products be labeled with their own name. Essentially, it was an offer for original equipment manufacturer business.

Ibuka and the Tokyo management team thought he should accept it. But Morita, standing firm, declined the order. The other company scoffed at the decision, boasting of their 50-year history. Morita retorted, “In fifty years’ time we will have made the name Sony as famous as yours. So it’s no, thank you.”

If he had accepted the business offer, what a different story we would be telling now. Sony might have become a technologically advanced subcontracting manufacturer, but it would not be the titan we know today. Despite still being a small company, Morita had an overwhelming entrepreneurial determination to turn the Sony brand into a success.

Morita also possessed an eye for recognizing potential hit products. The story of the Walkman portable headphone cassette player is a classic example.

It began with a request in 1978 to developers by Ibuka, then honorary chairman, to customize a portable cassette player for him. He wanted to be able to enjoy music in stereo when flying overseas on a business trip. The team modified an existing product, a recording device known as the Pressman, removing the recording function to create a playback-only model and adding stereo sound.

After his return, Ibuka suggested that Morita try out his new toy. Morita was impressed with the audio quality, and his intuition told him this would be a hit. He immediately moved to commercialize the device.

Many within the company voiced concerns about a cassette player that lacked a recording function, and retail stores also expressed doubts. But Morita pressed on, and the first Walkman became a big seller soon after its launch in July 1979, taking the world by storm.

Morita’s pioneering global approach was radical. In 1962, Sony opened a showroom on New York’s Fifth Avenue. Morita believed that demand for Sony products would be spurred by a prominent presence in the Big Apple, visited by people from all over the world. A part of him also dreamed of brandishing the Japanese flag in this major arena of the business world.

In 1963, he moved with his family to New York, desiring to live among Americans in order to truly understand them. At the time, it was unfathomable in Japan for a company vice-president to relocate overseas, yet he left for a planned two-year posting.

Thanks to Morita’s desire to fit in, he gained many friends and acquaintances from diverse fields, including leading businessmen, heads of state, politicians, and artists. But the 1980s saw a growing fear in the West of the threat posed by Japanese business, and increasing trade friction with the United States and Europe. In 1989, Morita co-authored Nō to ieru Nihon (later translated as The Japan That Can Say No) with Ishihara Shintarō, the author turned politician (then minister of transportation) who would go on to be governor of Tokyo. Fearing a backlash in the United States, Morita did not allow his portion of the work to appear in the official English translation, but unauthorized translations associated his name with the book and its message.

Morita had intended to express his frank belief that management strategy where workers were laid off without remorse would never create a competitive business. Later, undeterred, he strived in writing and lectures to dispel misconceptions about his beliefs. Morita also lambasted the “Japanese business model” for the relatively low share of income distributed to workers, attracting criticism of him within Japan.

In his essay, Morita had also stated his belief that, while saying “No” to other countries was vital, it was also essential to express refusal within Japan. He hoped that the exchange of divergent opinions would help in the quest for optimal solutions.

Although Morita shared a friendship with Ibuka, 13 years his senior, they had different beliefs. When they discussed business, onlookers could be led to thinking the pair were fighting. Morita believed it was pointless if everyone held the same opinion. In his 1966 book Gakureki muyō ron (Never Mind School Records), Morita expressed his belief that people should not be judged on their academic background, nor on attributes such as their age, gender, or nationality. Based on this, Sony encouraged a culture of open debate unfettered by hierarchy.

The first time I met Morita, I was impressed that although he was chairman of the company, he wore the same gray uniform as the employees, and was smiling and amiable throughout the interview. This man was contending with world heavyweights on an equal footing, but he was not intimidating. If anything, he had an air of humility. Many hoped that he would become the next chairman of Keidanren (the Japan Business Federation), but, in his usual manner, he spurned the idea as ludicrous.

Morita came from a distinguished family that had produced sake in Chita, Aichi Prefecture, for over 300 years. Prior to the war, his family had its own home tennis court, automobile, electric refrigerator, and even a gramophone. Although raised with the manners and education typical of a wealthy, respected family, he was outgoing and magnanimous, while at the same time polite and cultivated.

Now, while the world continues to struggle with the COVID-19 pandemic, we also hold out for new entrepreneurs with the fighting spirit of Morita, who rose up from the ruins of postwar Japan to take on the world.