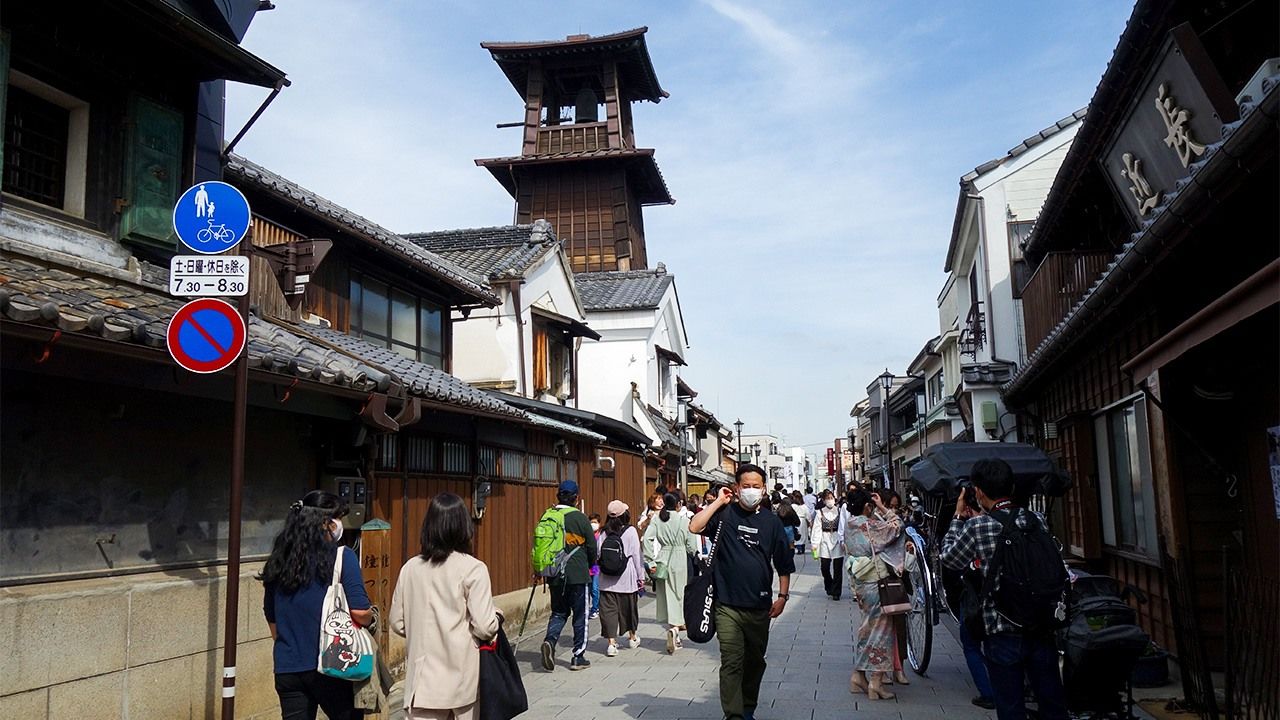 A Post-COVID Revival for Community Shopping? Sharing Expertise with “Machizemi”

Society Economy Work Jun 1, 2021
Between the spread of big-box stores, online shopping, and COVID-19, local shopping districts are in crisis. Many are looking to spark economic revival through machizemi, or town seminars, where shop owners share their expertise in a bid to attract a loyal customer base.

The machizemi concept was born in Okazaki, Aichi Prefecture, in 2013. The area was beginning to see suburban big-box chain stores drive down sales in the traditional downtown shopping district. Various district events all suffered from the same sense of impermanence, with little lasting effect in customer loyalty. The local Chamber of Commerce then had an inspiration. Local shop owners and artisans had far greater expertise than the chain stores. Why not make use of that? They gathered staff from 10 shops to work as instructors, sharing their specialized skills in lessons for residents. The events received widespread praise, and led to increased customer traffic.

Matsui Yōichirō, owner of an Okazaki area cosmetic shop, began traveling Japan as a machizemi evangelist to help share that success nationwide. Customers are happy, shop owners improve themselves and sales, and the towns gain vitality, making this a perfect example of sanpō yoshi—the business axiom espoused centuries ago by merchants from the Ōmi domain (Shiga Prefecture), meaning “benefit flowing three ways” to buyer, seller, and society as a whole. Now, there are 415 communities around Japan holding machizemi lectures.

Some specialty courses offered in machizemi events around the country include one on knife sharpening in Hamamatsu, Shizuoka Prefecture; one in Kurume, Fukuoka Prefecture, a clinic for weight loss through pelvic-stretching exercises; and a workshop on delicious dashi broth making, taught by a chef in Funabashi, Chiba Prefecture. Local customers have been won over by professionals sharing their hard-won skills. Matsui says, “Many shops saw 20 to 30 percent increases in sales after holding a seminar.”

Bringing a Touch of Fun

Kawagoe, Saitama Prefecture, hosted a major machizemi event from late March through the end of April this year, and the sponsors took extreme care to ensure proper pandemic countermeasures, avoiding overcrowding and enforcing hand disinfection. Kawagoe is known as Little Edo for its rich history and traditional buildings, but once you get past the commercial and tourist district with its old warehouse-style buildings and Toki no Kane (Bell of Time) tower, it is actually filled with hidden boutiques and local shops. This year there were 62 shops participating, fewer than usual due to the pandemic, but this still made it one of the largest machizemi events in Japan. The 81 different lectures were outlined in colorful fliers that brought a touch of fun to the proceedings. 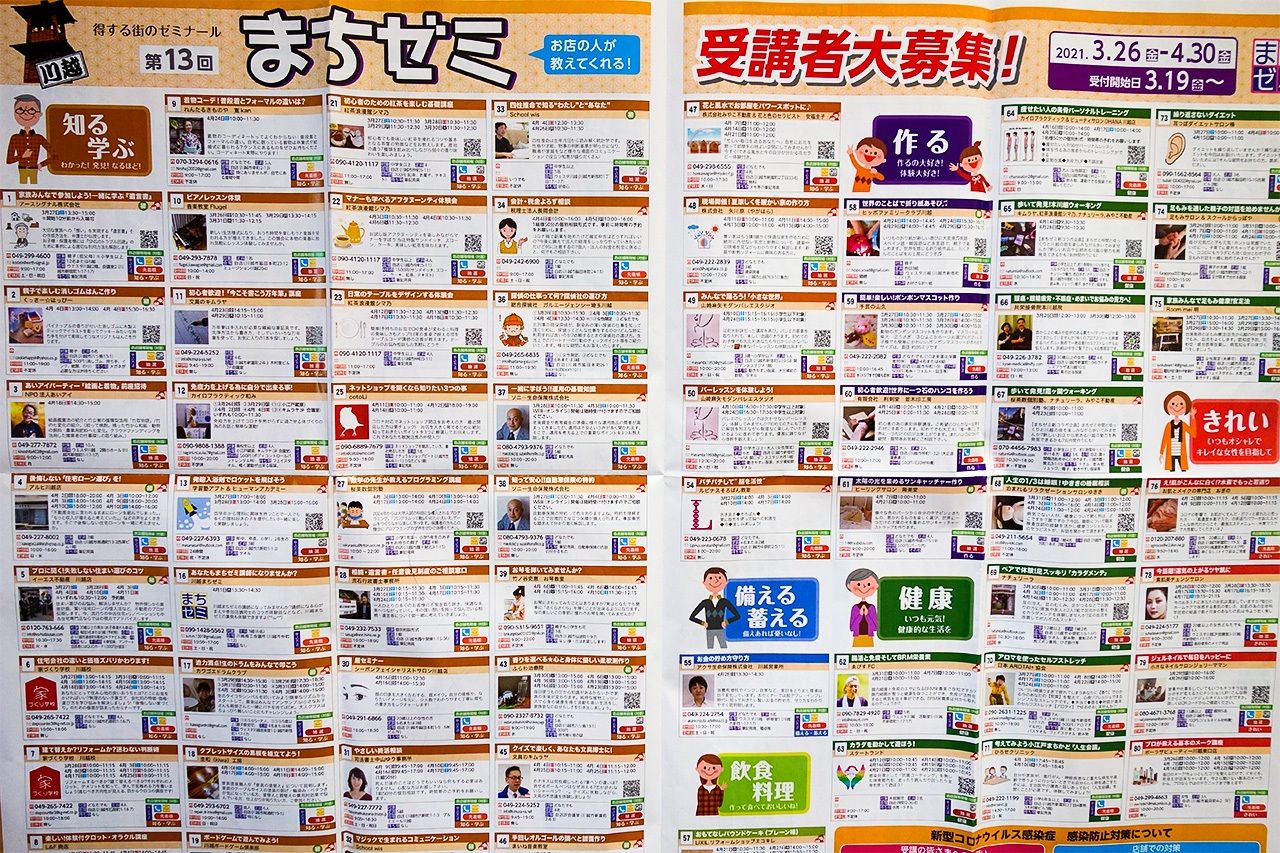 A flyer describes the 81 courses in the Kawagoe event.

Tea shop Kōcha Romankan Shimano offered a basic black-tea course for those new to making their own. Shop owner Yoshida Yukika explained ways to make tea more enjoyable to students, including tips like pouring the hot water from up high to mix the tea vigorously, encouraging the leaves to circulate in convection currents, something called jumping. She also produced her own textbook to explain the origins and geographical distribution of tea for the course, and offered a taste test of seven varieties. The class was an hour long, but students said it flew by. Participation only cost ¥700.

Afterward, students offered comments like “I just use teabags at home, but now I want to try making from loose leaves,” and “The seven types we tried tasted and smelled completely different. Darjeeling was the best!” One woman, who took copious notes in her textbook during the seminar, was fascinated to learn that black tea came from China. Among the participants was one who joins the machizemi almost every year, saying, “I started using a local dentist and a cram school in my area after taking machizemi courses there because they gave me a chance to get a real sense of the shops and staff.” 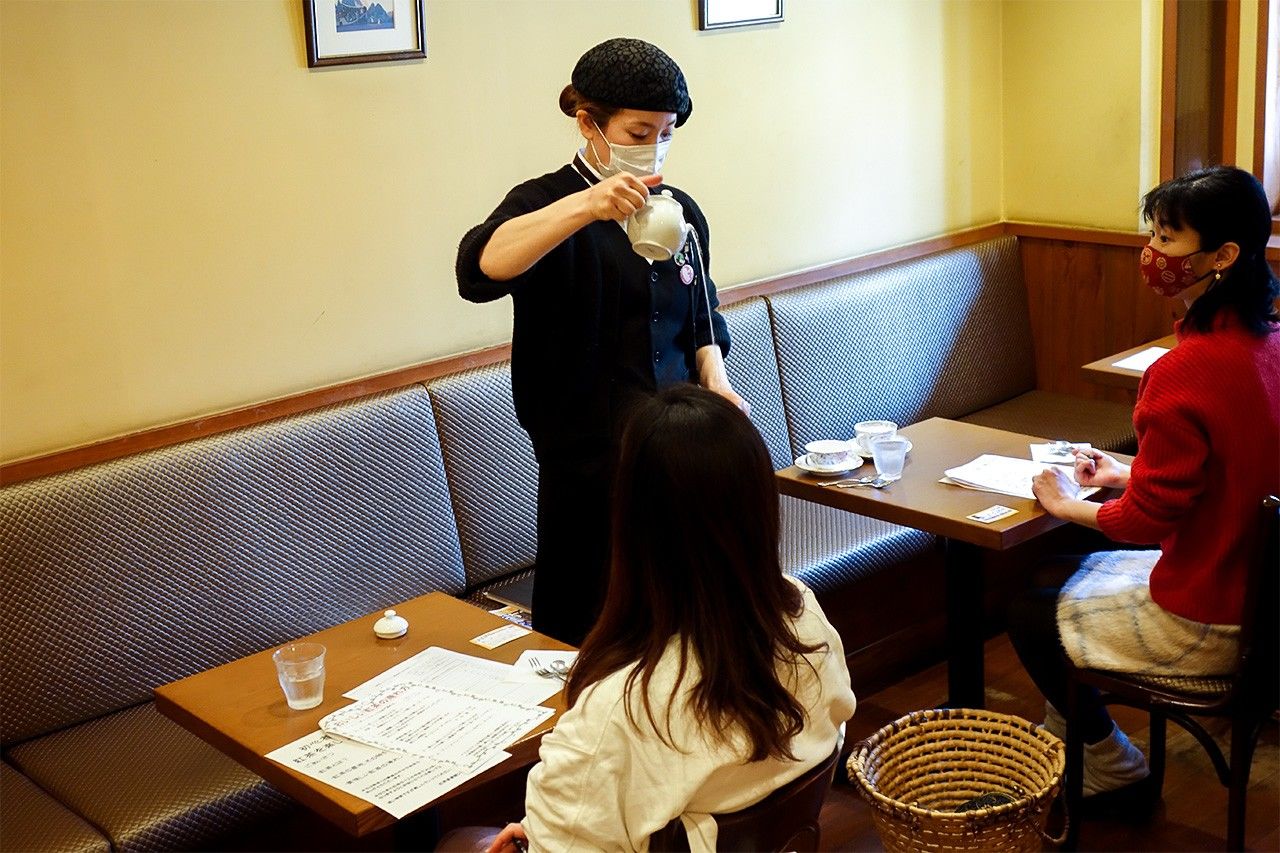 Yoshida Yukika teaching how to pour a perfect tea. Only four students were allowed at once, and social distancing was strictly enforced.

Over the last seven years, Yoshida has taught over 2,000 students. She says that her reservations are usually filled almost as soon as they open. Her original motivation for holding the course was to return to the basics of being in business. “I was nervous about teaching people when the sponsors first reached out, but when I thought about it again I realized it would be a learning experience for me, too. There can be pressure, because some of the students already really know tea, but that’s also motivating. I also realize now it’s fun for me, too, when the students enjoy it.”

The Machizemi rules forbid using the courses as avenues to sell the shop’s goods or services directly, and participation fees are limited to covering costs. These rules help keep students from feeling deceived. Participants often become true fans because of the lack of aggressive sales. Yoshida says, “It’s not so much that sales numbers are showing huge changes, but in the last few years we have finally seen a definite increase in the number of customers who seek us out by name. I can really feel the increase in popularity and recognition.”

Kishida Dance Academy, which held its “Body Care at Home” class online this year, joined for the third time. Warming up exercise is absolutely essential for rigorous dance, and instructor Okada Yūko realized that same routine she uses might help loosen up bodies tightened by the stresses of daily life. The seminar also offers students a chance to get a taste of the school without the intimidating requirement of actual ballroom dancing, and so far five past seminar participants have gone on to enroll for dance classes. Okada says that preparing for the seminar has also helped the school connect with other shops in the area, which for her has been the most important part. The studio has built friendly relationships with a nearby kimono rental shop and piano teacher, and they have worked together on project plans to broaden the scope of their activities. 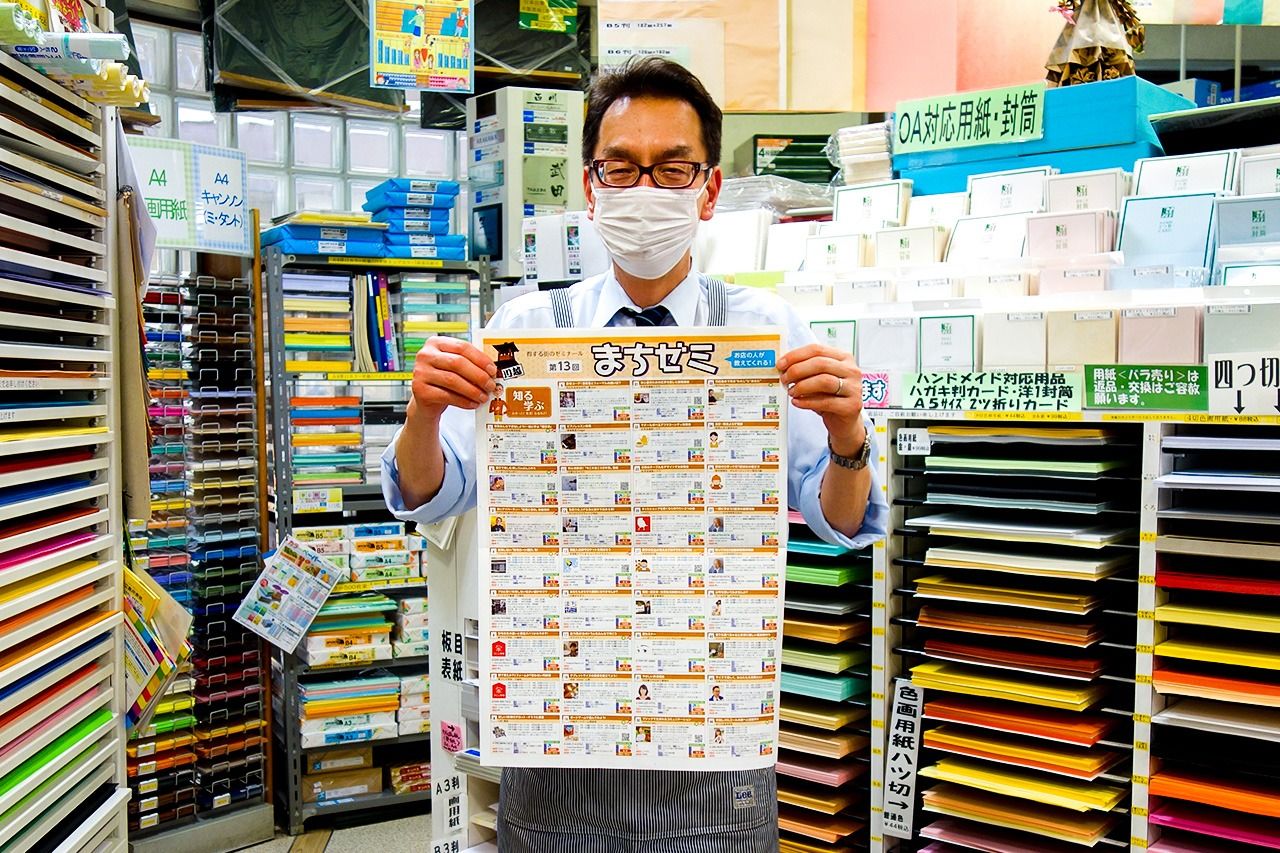 Kimura Kazuya, the managing director of stationery shop Kimuraya Shōten, organized the Kawagoe machizemi. He learned about the concept in 2014 when reading a financial magazine, and was inspired because he himself had felt the approach of business crisis brought by major chain store expansion. He invited machizemi evangelist Matsui to come hold a lecture, and was able to get the program going with help from the local chamber of commerce.

Kimura explains the project’s impact using the example of traditional Chinese medicine. “The effects are not immediate, but in the long run, people decide where to shop based on feelings. Shopping online through your smartphone is easy, but it can feel lonely, right? I think after they participate, people will start to feel some attachment to the local area.”

These benefits are not limited to larger cities like Kawagoe, a bedroom community for Tokyo with some 350,000 residents. Machizemi programs also have great potential for more remote towns, where aging and dropping populations are serious issues.

Yurihama, Tottori Prefecture, is a town of 16,000 on the Sea of Japan. The town has held machizemi courses for 17 years now, and Fukumoto Haruko of the local chamber of commerce says, “When we started we were so worried about whether people would come or not.” Now, courses have become so popular over the years that reservations fill up practically as soon as they open. “There are very few places where adults can go to learn,” Fukumoto says, so the machizemi seminars are satisfying a craving local residents have to learn professional skills. People even come from neighboring towns to take part.

Yurihama does not even have a single concentrated shopping district; shops are scattered around the town. Even so, the power of the machizemi brand brings customers and shops together, and has created a kind of “virtual” shopping district for the community. 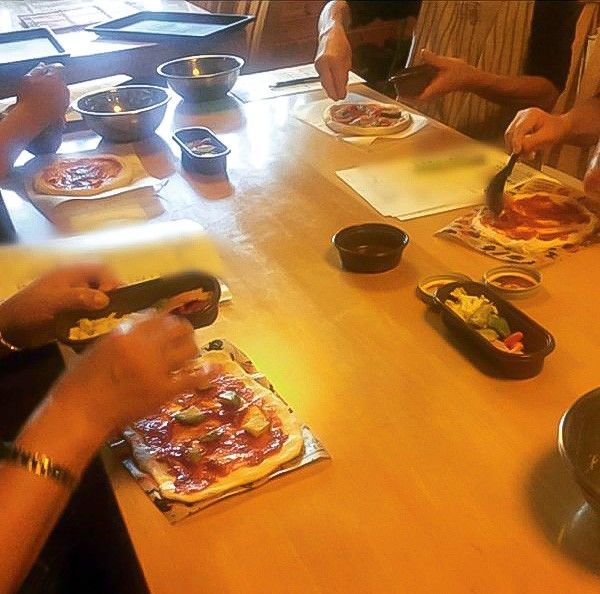 A handmade pizza course held at guesthouse Kaiseikan in 2019. (© Yurihama Chamber of Commerce)

Machizemi has also opened up unexpected sales channels outside the prefecture. Seaside guesthouse Kaiseikan once held a handmade pizza course, and at participants’ request added a special handmade bread course a few days later. One of the participants said, “These bagels are so delicious. There’s someone I want to try them.” The student connected the Kaiseikan owners to the management of a vacation resort in Okinawa, and they now sell bread directly to the resort.

There are also times when products unexpectedly hit it big and take the region by storm. In 2018, the local Shopping Center Promotion Association in Kanoya, Kagoshima Prefecture, held a lecture on the benefits and production of black garlic, which was quite popular. Evangelist Matsui recommended they try selling it themselves, so they began commercial development. It took five years of hard work to develop black garlic into a distributable product, but they eventually succeeded. Now, even as competing products appear in droves, the Kanoya original saw sales of over ¥15 million last year. Achieving that kind of success from a relatively rural area is quite a feat. Although the production process was made public in the original machizemi, Motomura Masatsune, advisor to the promotion association, has no regrets. He says, “We’re happy as long as the local garlic sells.”

The reality faced by local shopping districts nationwide remains harsh, though. According to the Small and Medium Enterprise Agency’s Survey on the State of Shopping Districts, two-thirds of all respondents answered that they are “declining” or “in danger of declining.” The survey was taken in 2018, before the pandemic, so the current situation could well be even more bleak. In addition, 64.5% of respondents cited “difficulty in finding successors due to the aging of the population” as one issue facing their shopping district. 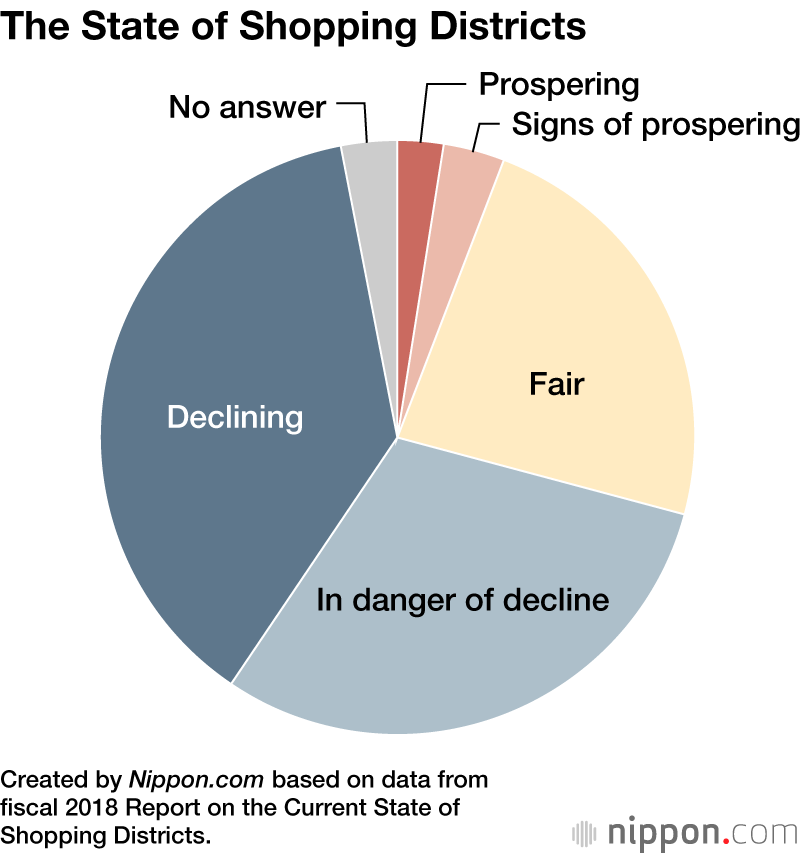 Even Matsui, officially designated a community building evangelist by the Cabinet Secretariat of Japan, admits that compared to major chains, “Local shopping districts can’t compete in terms of product lineup, price, or location.” Now, the pandemic has expanded nesting demand, to the benefit of e-commerce sites like Amazon.

However, Matsui says, “The strength of any shopping district lies in the pride of its merchants—their focus and experience—and the fact that they are willing to cooperate rather than remaining isolated. People who share those ideals are sure to become fans. If local merchants can demonstrate the value of their presence, they still have a chance.” The fans that machizemi outreach can nurture are exactly the kind of base that is most valuable in times of crisis such as pandemic or recession. 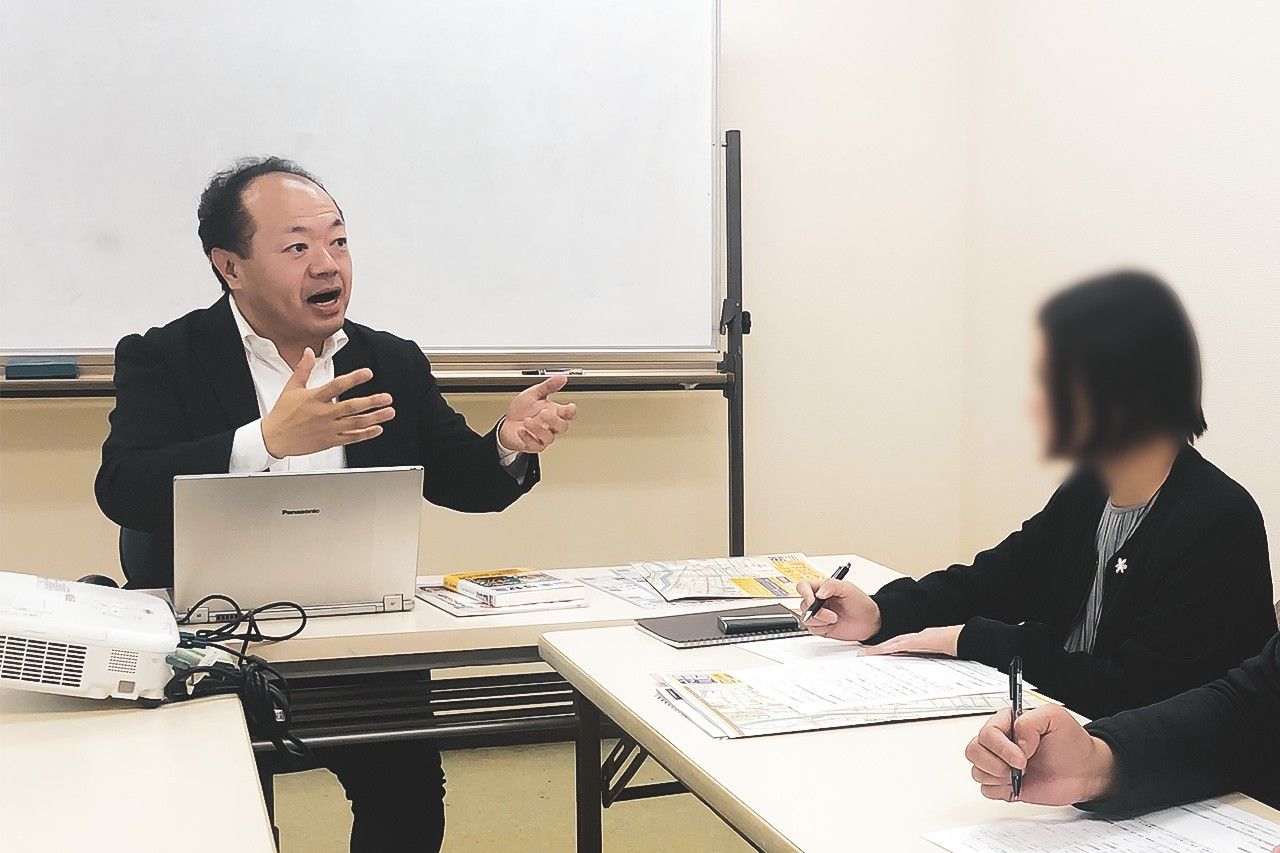 Right now, of course, the greatest challenge is the COVID-19 pandemic. Last year, nearly all of Japan’s shopping districts saw sales drop, and most machizemi seminars had to be suspended. The dining industry in particular is in danger, with many restaurants being forced to shorten business hours, with no path toward normalization.

Matsui is ready to end the machizemi program if infections appear as a result of an event, but for now he is watching vaccination progress with hope for the chance of recovery. The Japan Chamber of Commerce and Industry is currently planning to hold the first nationwide machizemi from September through November, and planning the strongest measures possible to prevent infection, in hopes of bringing a bit of optimism amid the gloom of the ongoing pandemic. There are also plans for several online courses.

Matsui believes shopping districts can successfully achieve revitalization if they can draw on their people power, and not just pay lip-service to the need to connect. As the good old days of the postwar boom era are getting ever further in the past, do the same people-centered sales styles still have a chance at success today? “They do,” he says with a smile. “They’re already working.”

(Originally published in Japanese. Banner photo: The Toki no Kane tower, symbol of “Little Edo,” Kawagoe. All photos by the author, except where noted.)