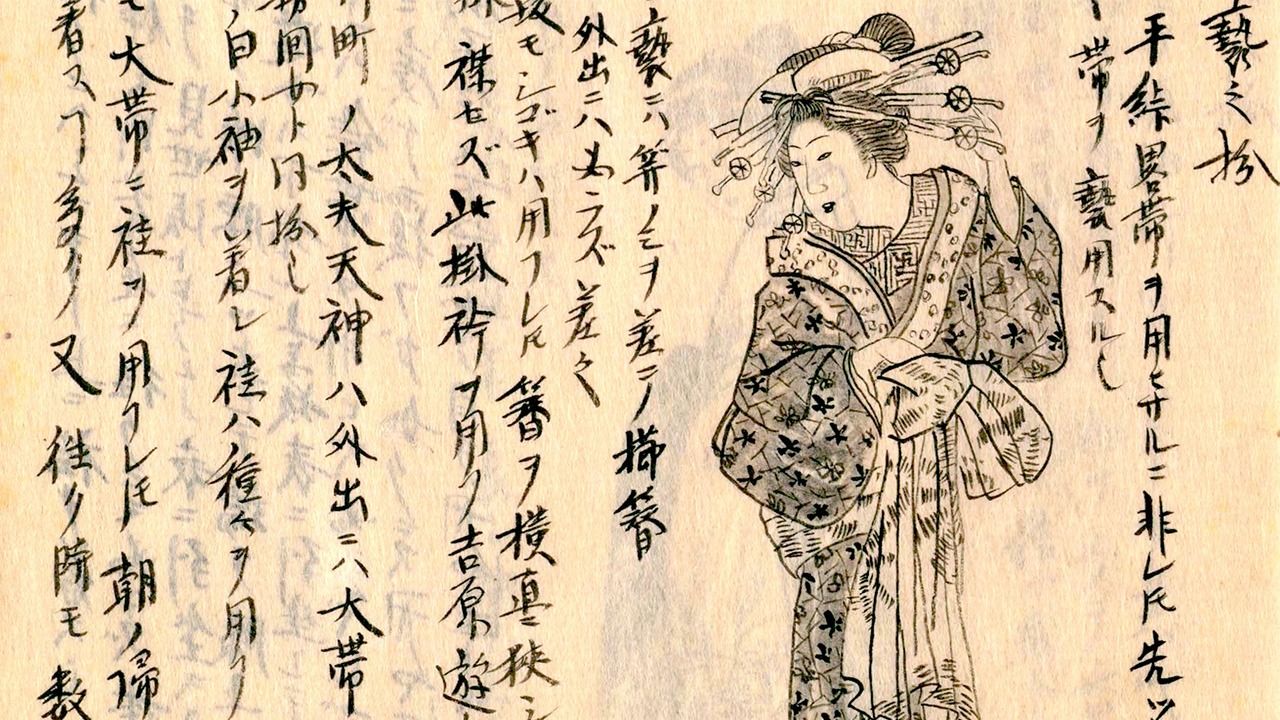 The Courtesans of Yoshiwara

History Arts Apr 21, 2022
The licensed pleasure district of Yoshiwara is the destination in the latest in this series of articles looking at urban life in nineteenth-century Japan through the eyes of writer and sketcher Kitagawa Morisada.

Courtesans in East and West

Japan’s three major cities in the Edo period (1603–1868)—Kyoto, Osaka, and Edo (now Tokyo)—all had licensed quarters established by the shogunate. In Kyoto there was Shimabara, in Osaka Shinmachi, and in Edo Yoshiwara. Kitagawa Morisada, who left many sketches of urban life in Japan’s nineteenth-century cities, was from the west of the country, so was apparently familiar with Shimabara and Shinmachi. When he came to Edo for the first time, however, Yoshiwara was new to him, and he noticed the differences. In particular, he made comparisons of the highest-ranking courtesans in Yoshiwara and its western counterparts. 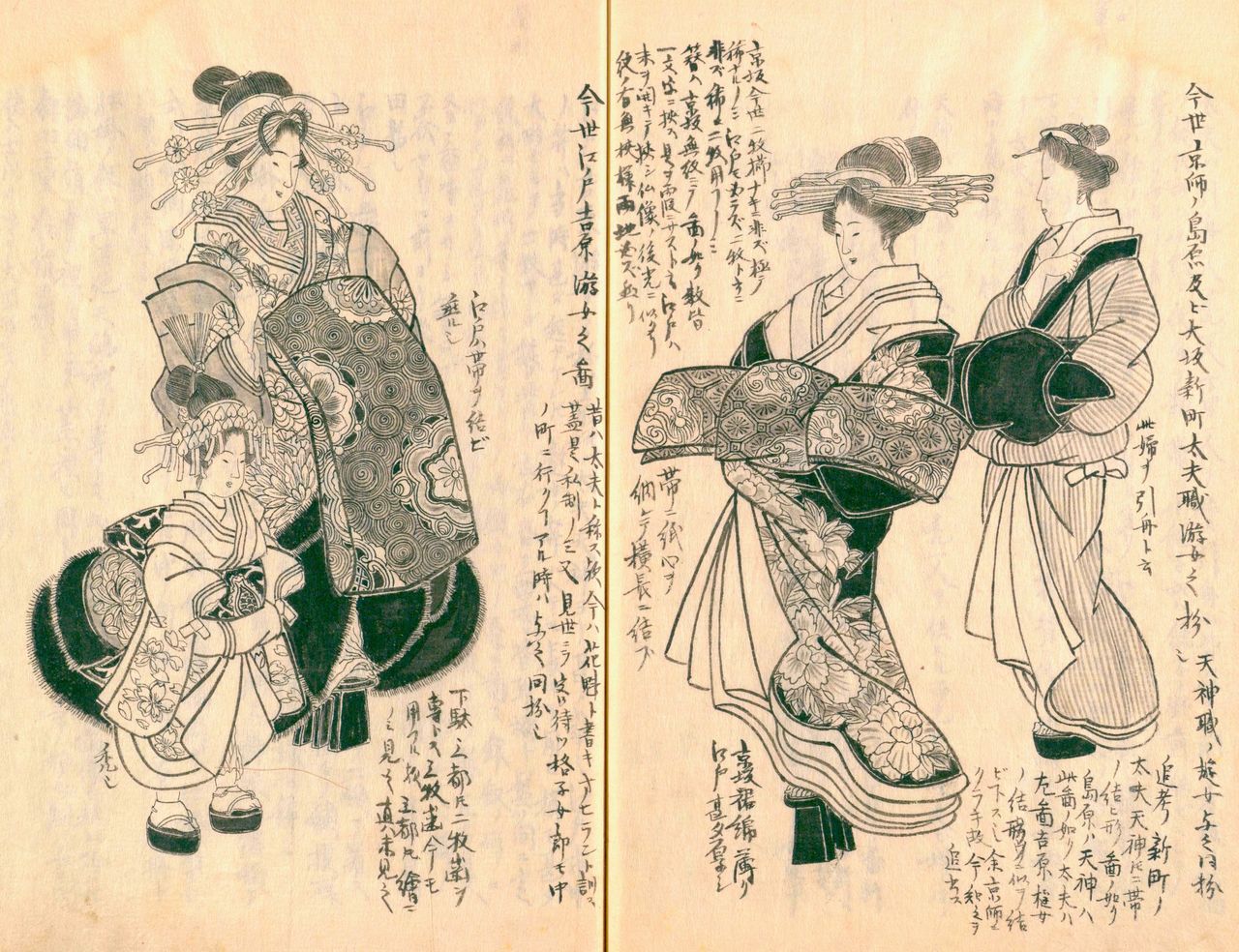 Both the courtesans in the sketches present a display of luxury and splendor, but there are many differences in fashion, from the way their belts are tied and their hair is styled to accessories like combs and kanzashi hair ornaments. Morisada recorded these in his detailed pictures and notes.

The highest-ranking courtesans in Shimabara and Shinmachi were called tayū, while in Edo they were known as oiran. These often-confused terms both refer to the women of the highest class in the pleasure quarters. At first, the word tayū was also used in Yoshiwara, but the number of women of this rank steadily declined before they effectively disappeared around the mid-eighteenth century.

According to one theory, the word oiran is a shortened form of oira no tokoro no nēsan, meaning “a girl from our place,” used by those in the lower ranks. Although the truth remains unclear, while tayū was used in the western cities, the term oiran appeared in Edo. Morisada himself made a note on this linguistic development.

When out walking around the licensed quarters, the tayū were accompanied by attendants in their teens called shinzō. In Edo, however, the attendants of the oiran were chosen from younger girls called kamuro, and seen as future potential favorites. They studied deportment around the oiran, as well as reading and writing.

Both the tayū and oiran tied their belts in front, which is said to have indicated that they were prostitutes. However, the tayū wore their belts stretching horizontally, representing the 心 (kokoro) character, meaning “heart,” apparently with the meaning that they would not easily give their hearts away. The oiran had their belts hanging down, which is thought to have been for aesthetic reasons.

The prostitutes in Yoshiwara of the upper ranks were generally known as oiran, but there were more specific ranks within both upper and lower levels.

Created by the author, based on various sources.

The oiran were unattainably expensive for most men. Nagai Yoshino, a cultural critic of the Edo period, says that it would cost one ryō and one bu, or the equivalent of ¥130,000 today, to spend a night with the highest-ranking chūsan.

What was more, it was said to be usual to pay three visits before being accepted for the first night of pleasure, at which point it was necessary to pay a gift of money, as well as making presents of belts or kanzashi, if asked. The owners of the establishment also required handsome tips. The clients might end up paying ¥1 million in today’s money before finally sleeping with the oiran.

However, it might be that this idea of three visits being required was just a form of urban legend, spread via popular fiction. It may have arisen as the kind of men who could afford such high fees were extremely rare in Edo.

Commoner customers paid for the lower-ranking shinzō. There is no specific data, but as the lowest price for the oiran was the equivalent of ¥25,000, it would have been less than this for the shinzō.

The tomesode shinzō started work at 15, while the furisode shinzō started later, at 17, and had the possibility of rising to become oiran, making them of slightly higher status. The picture below shows a shinzō with simpler kimono, hair, and accessories, compared to those in the higher ranks. 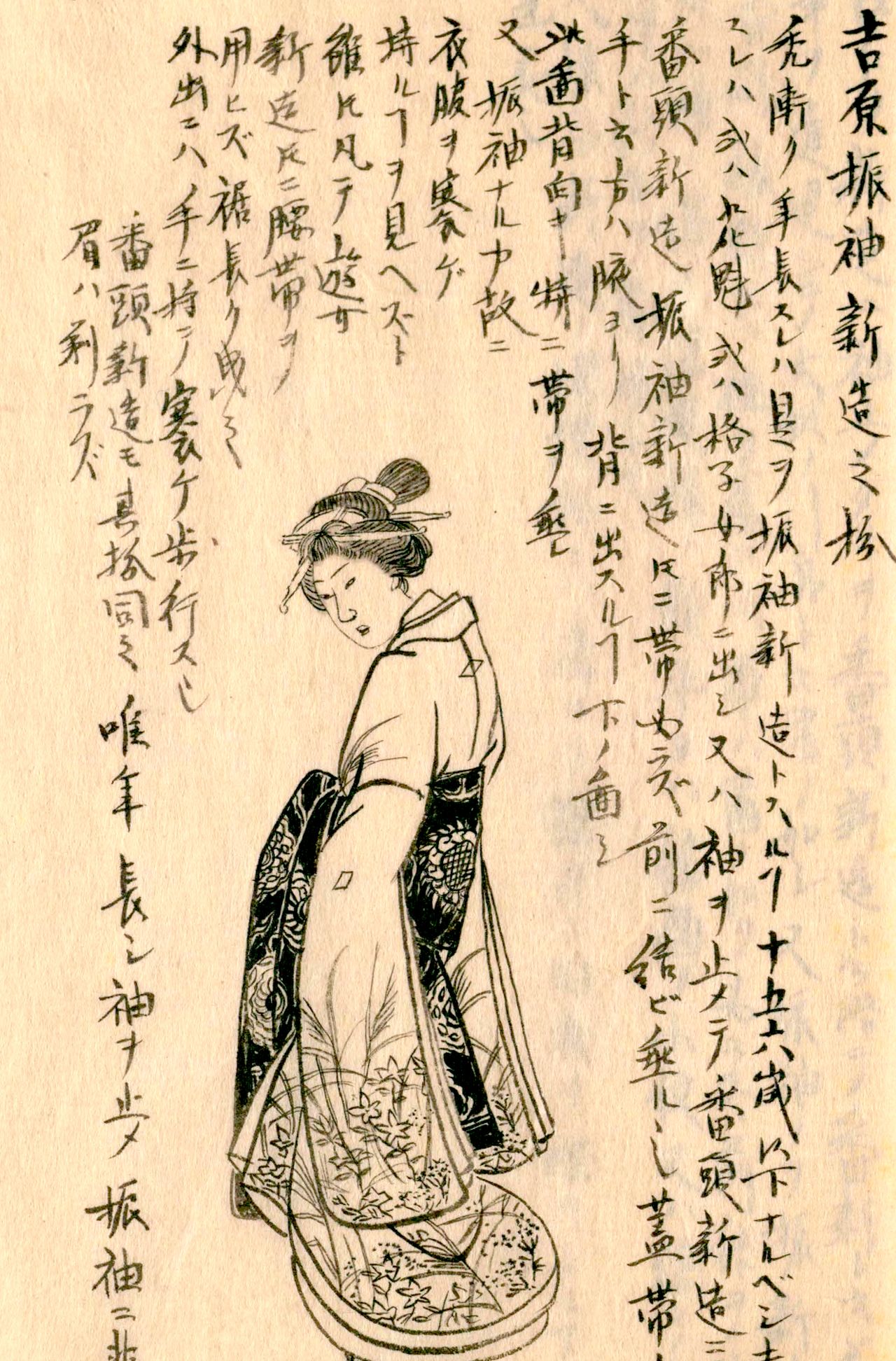 The shinzō sat on display to customers in the harimise, a room on the first floor of the brothel with a lattice front. Harimise were lined up along the main street of Yoshiwara. 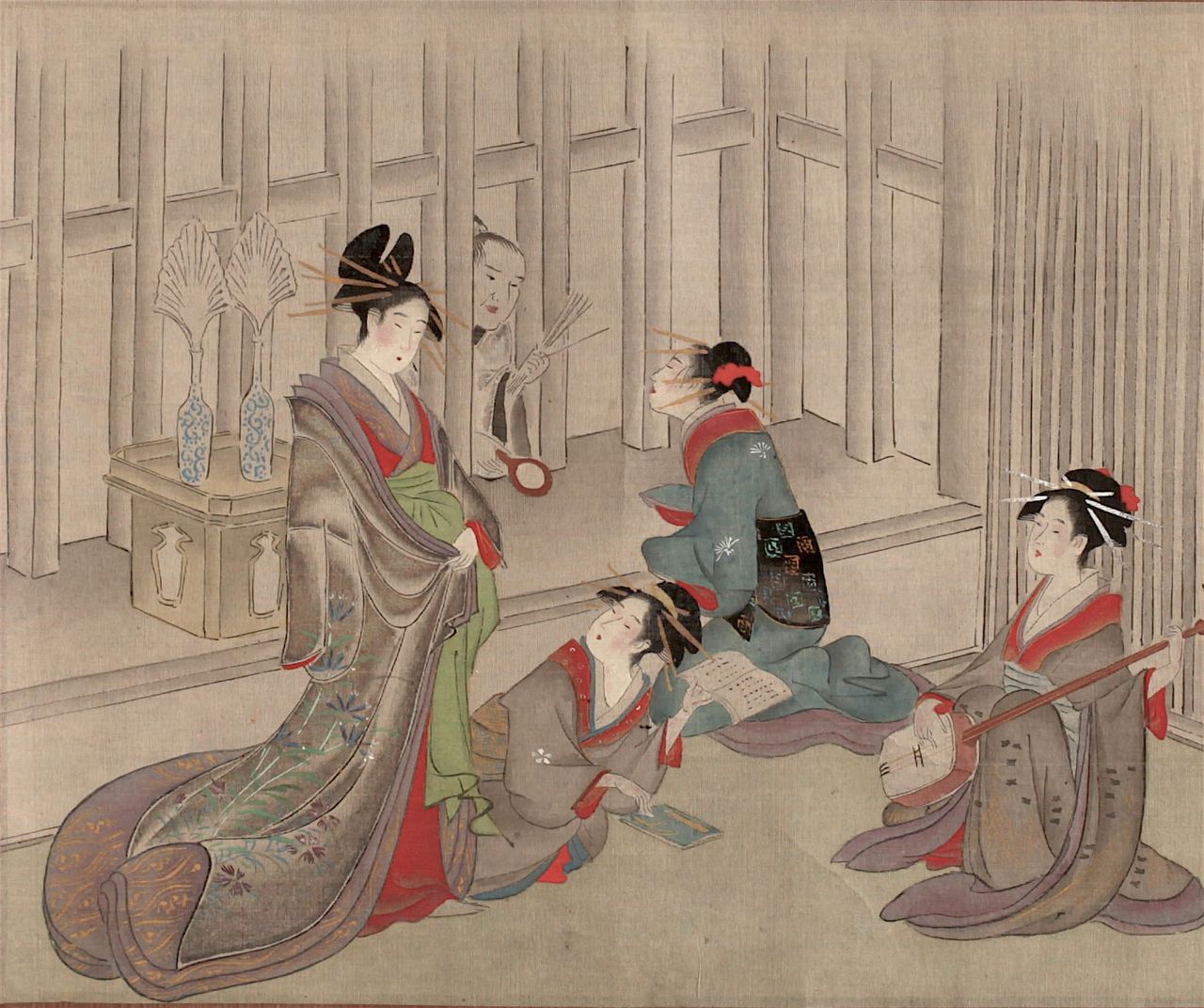 Prostitutes in a harimise, separated from the street by a lattice, in Yoshiwara jūniji (Yoshiwara at Twelve O’Clock). (Courtesy Kansai University Digital Archive) 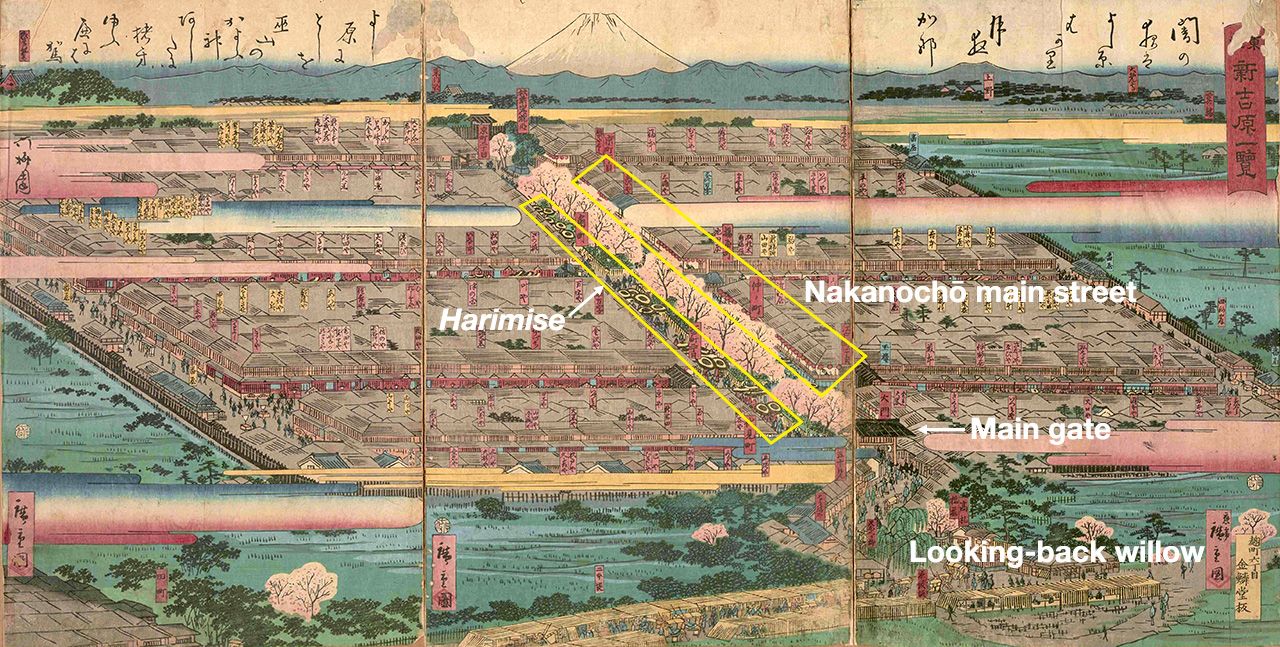 The view of Yoshiwara shows harimise on both sides of the Nakanochō main street. The mikaeri yanagi, or “looking-back willow,” is said to have taken its name from the wistful backward glances of men leaving the pleasure district. Tōto Shin-Yoshiwara ichiran (View of Shin-Yoshiwara in the Eastern Capital) by Hiroshige II. (Courtesy Tokyo Metropolitan Central Library)

After customers made their choice in the harimise, they went upstairs together with the sex workers. 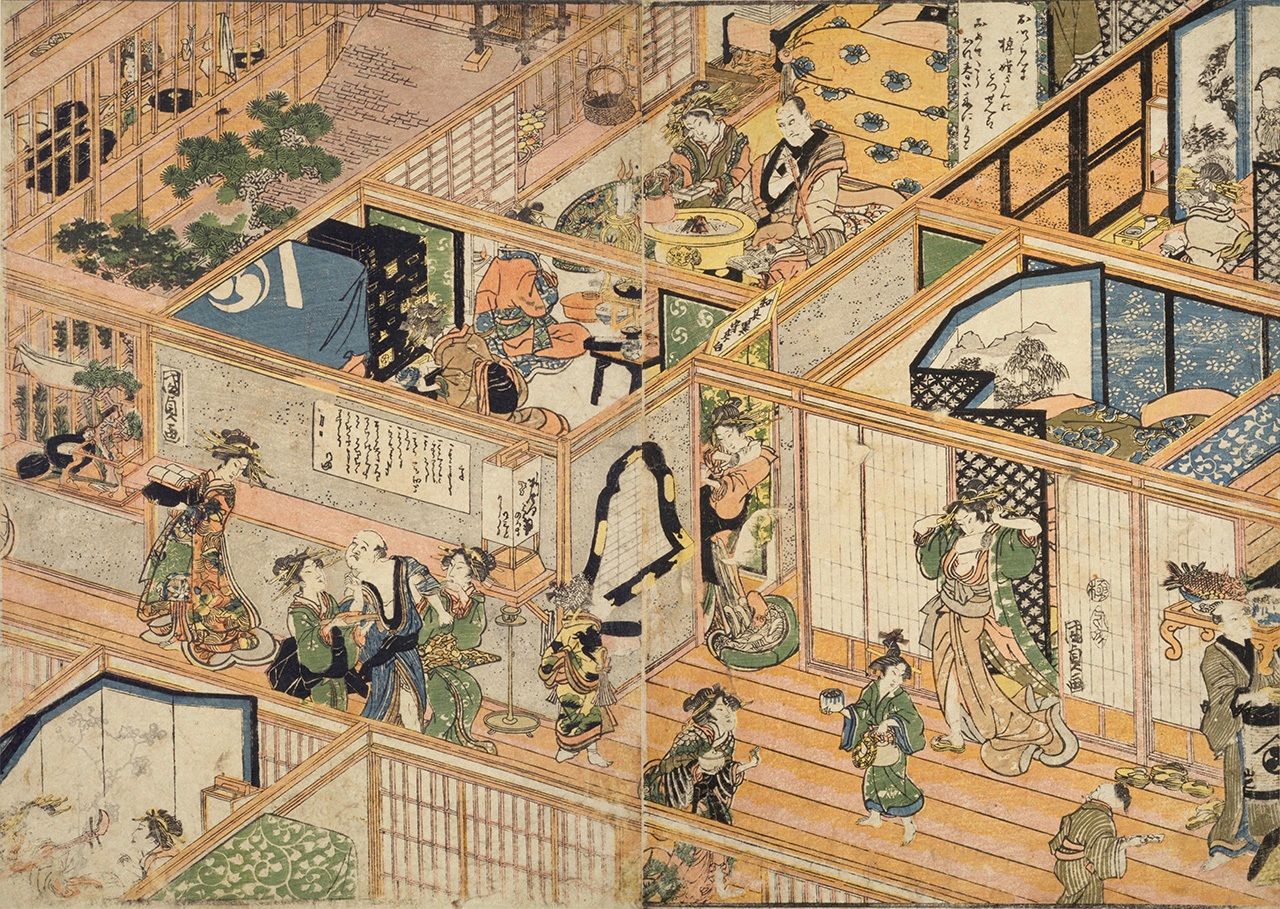 The second floor was packed with prostitutes, customers, and servants. It was usual to drink sake together first, but some customers passed over this stage in their eagerness for consummation. The oiran had separate quarters at the back of the establishment, so the picture shows the lower-ranking girls, and the rooms are probably the mawashibeya used by couples in turn.

One can only speculate as to Morisada’s habits in Yoshiwara, but as he lived a single life in Edo for a while, it is possible that he was a regular. His sketches show his usual keen eye for details.