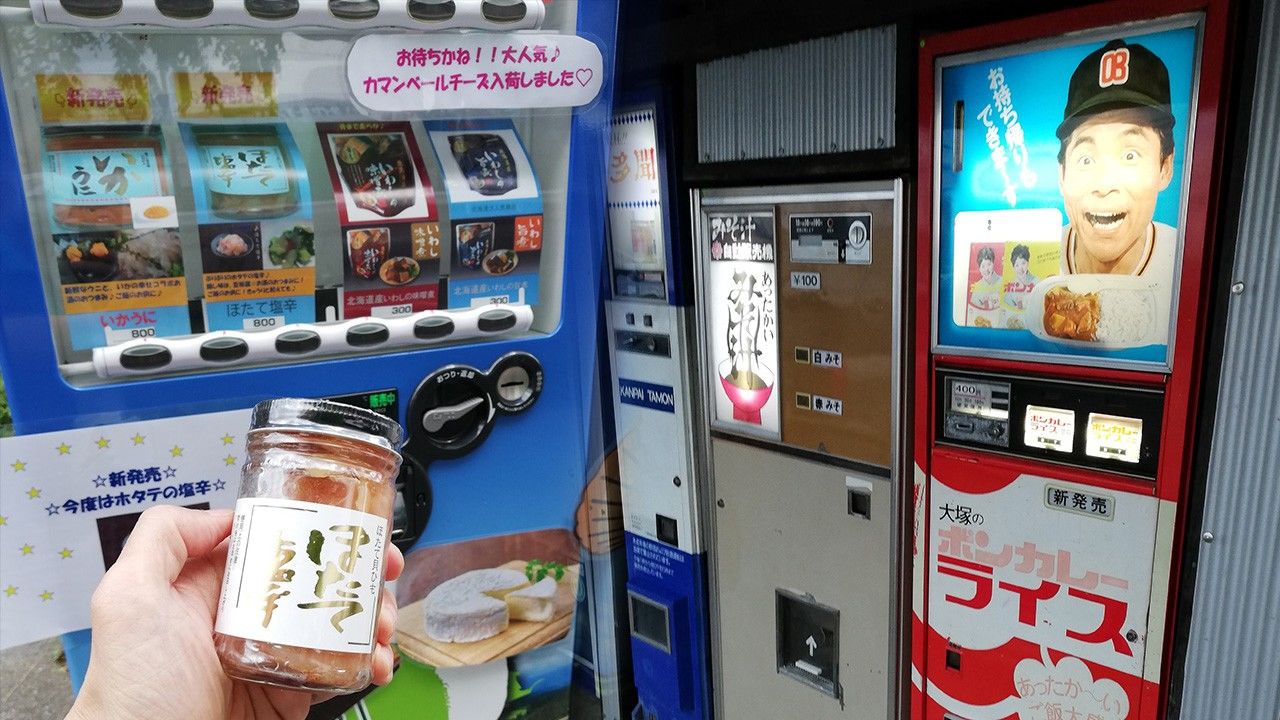 The Thrill of the Vending Machine: Interview with an Enthusiast

Society Culture Lifestyle Jul 15, 2021
Vending machines have thrived for decades in Japan, and enthusiasts like Nomura Makoto have a particular nostalgia for those from an earlier era that only stay in operation through the efforts of dedicated fans with a knack for repair.

Nomura Makoto was 17 when he got the vending machine bug. He now runs a fan website dedicated to the devices, but back then he was just a typical high schooler, commuting from Saitama Prefecture to Tokyo. Along the route to school, a 24-hour game center caught his eye. “It didn’t look like somewhere I’d want to go inside,” he says, but even so, one day he was sufficiently overcome by curiosity to investigate further. He was amazed by the lineup of vending machines in the eating area. Toast, hamburgers, miso soup, ramen, kakigōri (shaved ice)—this unexpected bounty gave birth to a lifelong obsession.

He began a quest to find new vending machines, taking particular pleasure in tracking down those selling hamburgers. The first burger machines appeared around the time McDonald’s opened its first Japanese restaurant in Ginza in 1971, and by the start of the 1990s, when Nomura was in high school, they could be found here and there around the city. “They had a high water content, which made them soggy and not at all tasty compared with McDonald’s,” he comments, but still he felt an attachment to the machine products. Gutenburger was a particularly memorable brand. It was launched as Mac Burger in the 1970s, but changed its name after legal action from McDonald’s Japan. Until it ceased sales in 2002, Gutenburger was the best known of the vending machine hamburgers. 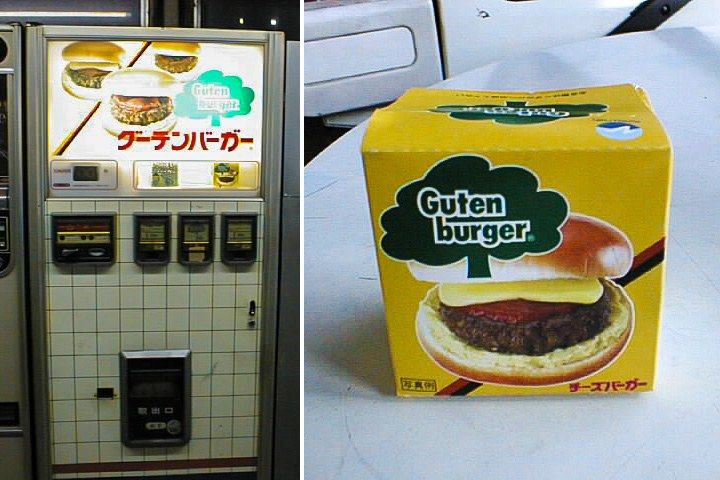 Gutenburger was formerly sold by a subsidiary of Marushin Foods.

Nomura began his blog in 1998, when he was 24. “I heard there was a place in Isesaki, Gunma Prefecture, with a lot of vending machines, so I set out to find it. This was Yamada Shōten, an outlet with dozens of retro machines and no staff. I wanted to let other people know how great vending machines are, so I started a blog called Yamadaya, with the name based on the location. I got more people reading it after I wrote about what a shame it was that Gutenburger stopped sales in 2002. Yamada Shōten went out of business some years ago, but I’ve been writing the blog for more than 20 years.” 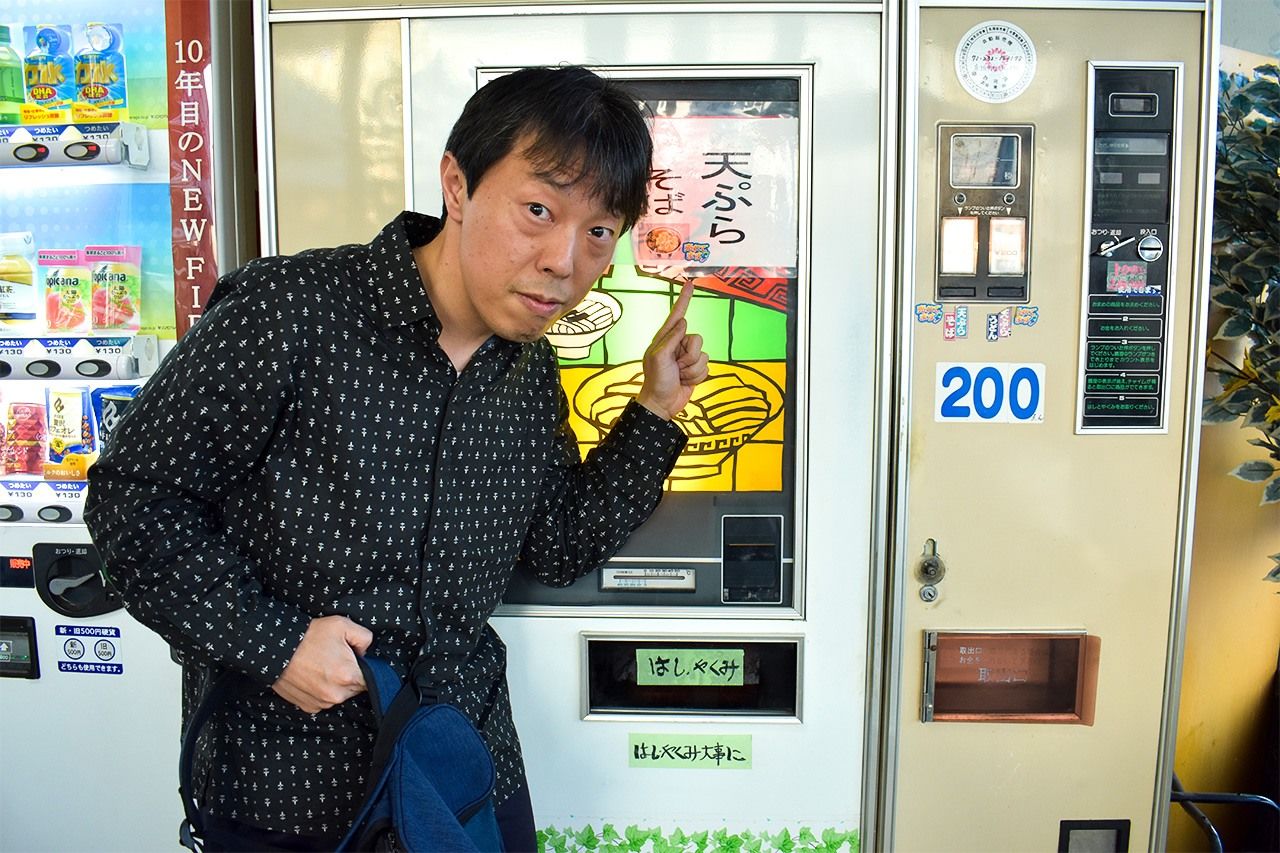 Born in 1974, Nomura Makoto lives in Saitama Prefecture and works as a systems engineer.

What makes vending machines so appealing?

“Buying something from a machine is entertainment in itself. You get excited just imagining what’s going to come out. Of course, your hopes are sometimes disappointed. The broth for the udon or soba is extremely thin, or your toast comes out burnt completely black . . . These days there are all kinds of videos showing what goes on inside vending machines, so you have a good idea what’s happening, but the thrill remains until you see what appears in the pickup box.” 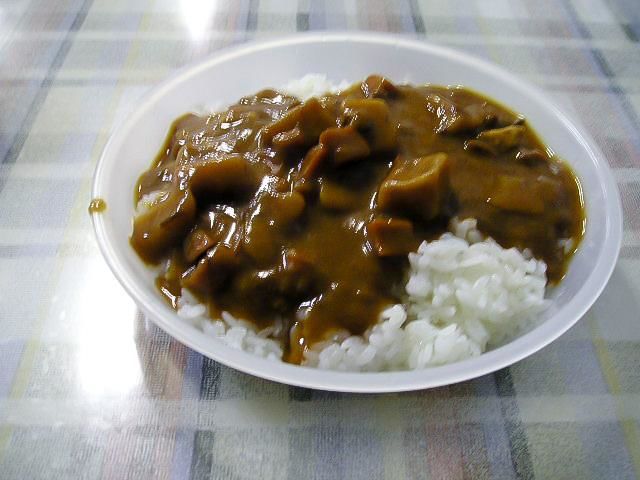 A vending machine curry from Kashima, Ibaraki Prefecture, in 2003.

He also says he enjoys how Japanese vending machines offer plenty of options for customers. “For instance, you can get cold and hot drinks in the same vending machine. What really stuck in my memory was a vending machine selling curry with rice that I discovered in Kashima, Ibaraki Prefecture. You could choose whether you wanted it mild or spicy, and the rice was piled up on the dish too. Right now, there aren’t any vending machines in operation serving curry rice like this.”

If they ever break down, it usually means the end for the older machines.

Nomura says that around the 1980s and earlier, the main manufacturers were Fuji Electric and Sanden. There was also Kawatetsu Metrological Equipment (which specialized in noodles and curry), Hoshizaki (hamburgers), and Sharp (noodles).

“Fuji is still a leader in the field, but mainly for drink machines. All the others have stepped back from the market. As they’re not performing maintenance anymore, any retro vending machines still around are thanks to the efforts of individual business owners. When there’s a problem, they either source parts from scrapped machines or make them themselves.”

Vending machines may be installed through contracts between, for example, beverage companies and landowners, or be set up by stores themselves. In the latter case, the owners must deal with everything from laying in and replenishing stock to garbage disposal. Furthermore, machines with an internal microwave for heating products are treated legally as a kind of restaurant and must meet the standards of the Food Sanitation Act.

“The owners put in a huge amount of work to keep the surviving machines going,” says Nomura. “There used to be repair businesses independent of the manufacturers, but the people who ran them have mostly retired due to old age. Maintenance is the lifeblood of vending machines, keeping those product flavors available. Udon, soba, or hamburgers from machines that people are striving to look after have a delicious flavor of their own. Even if the machine’s the same, the food can taste totally different depending on the location.”

Hanawa Norihiro, who runs a supermarket in Biei, Hokkaidō, wanted to revive noodle vending machines he judged as “extinct” in the prefecture, and so procured a couple of old Fuji Electric machines. Through crowdfunding, he is raising the money to install them, and plans to start sales of tempura udon and soba before the year is out. Saitō Tatsuhiro, the president of a used tire market in Sagamihara, Kanagawa Prefecture, traveled up to Hokkaidō to repair the machines. 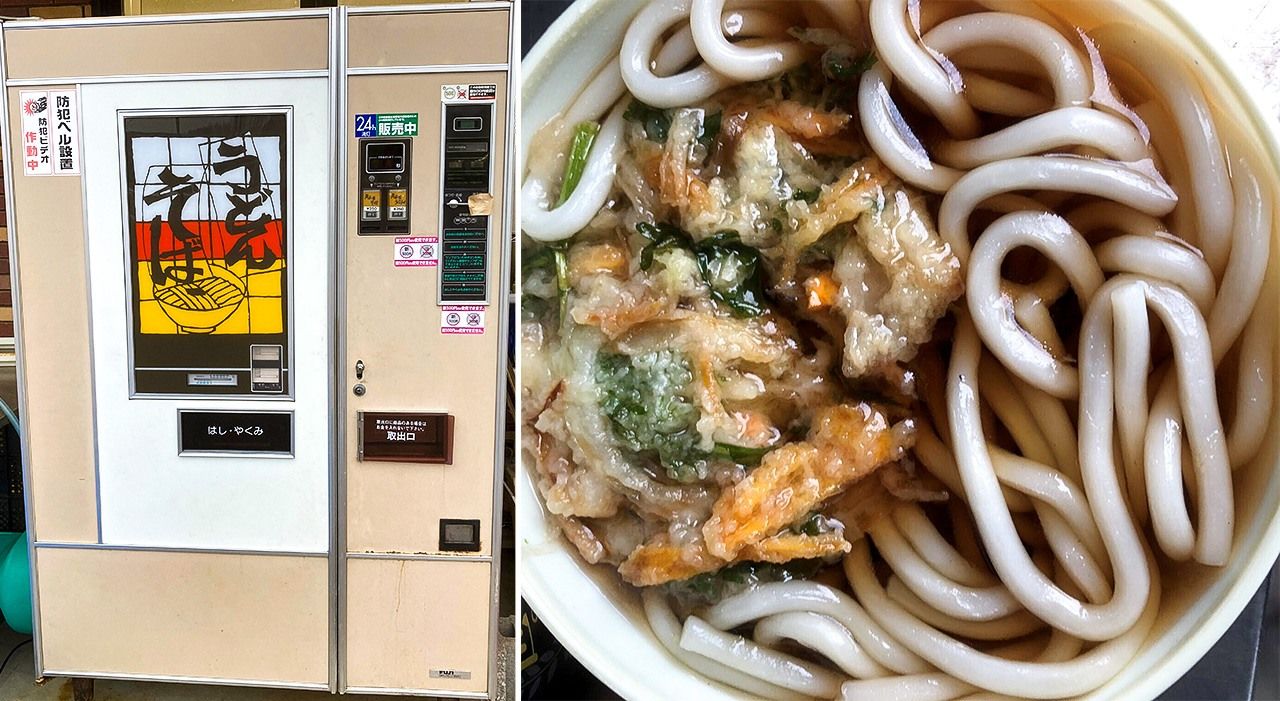 Insert a coin and the refrigerated noodles and other ingredients inside the machine are transported to the cooking area, where they are heated with boiling water, and then rapidly spun around to remove the liquid. Dashi stock is poured on top to complete the process, which takes around 30 seconds. (© Hanawa Norihiro)

In 2016, Saitō installed the first machines that he had repaired himself in his Kanagawa tire shop. Now there are 95 in operation, and it is a “pilgrimage” site for obsessive retro vending machine fans.

“I’ve always liked older vending machines, and I steadily built up a collection. A lot are brightly colored and fun just to look at. Then I wanted to set them running, and began repairing them,” Saitō says. “I thought that I’d give customers somewhere to rest while waiting for their tires to be changed, so I opened the vending machine area. Now I have almost all the old classics.” 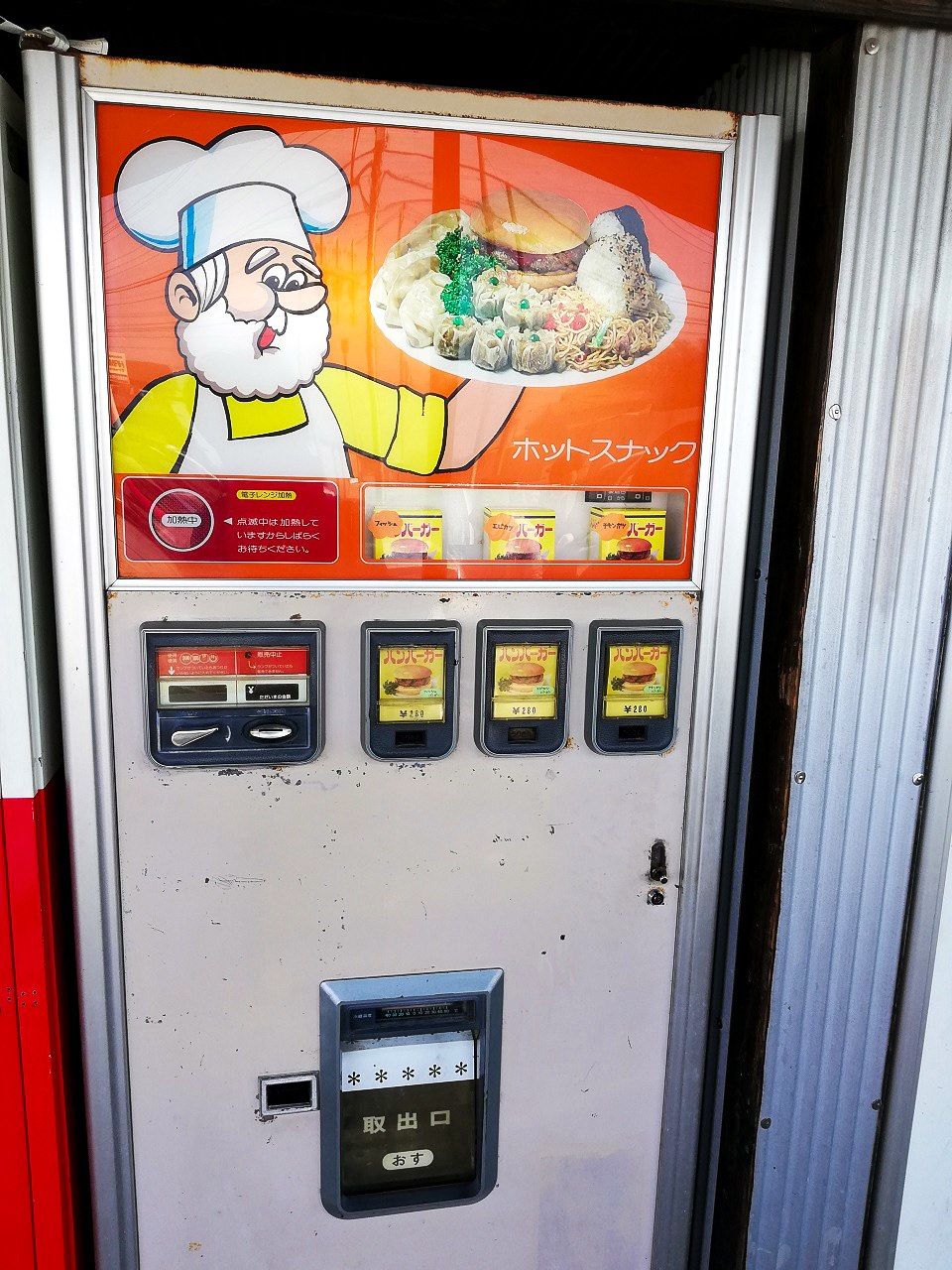 “We order the hamburgers from a local food company, but the staff and I handle all the preparation and refilling of machines for noodles, toast, and bentō meals. We now get more people coming for the vending machine area than to change tires. It must be around 1,000 people on weekends. A lot of families come, and the kids enjoy the kakigōri machines. There’s a machine with omikuji paper fortunes, and I think everyone who comes here gets one of those.”

Saitō’s dream is to travel the country repairing old vending machines so that they can go back into service. “There must be lots of retro vending machines that would still work if someone fixed them. I’d like to do all I can to keep them working for even a little longer.” 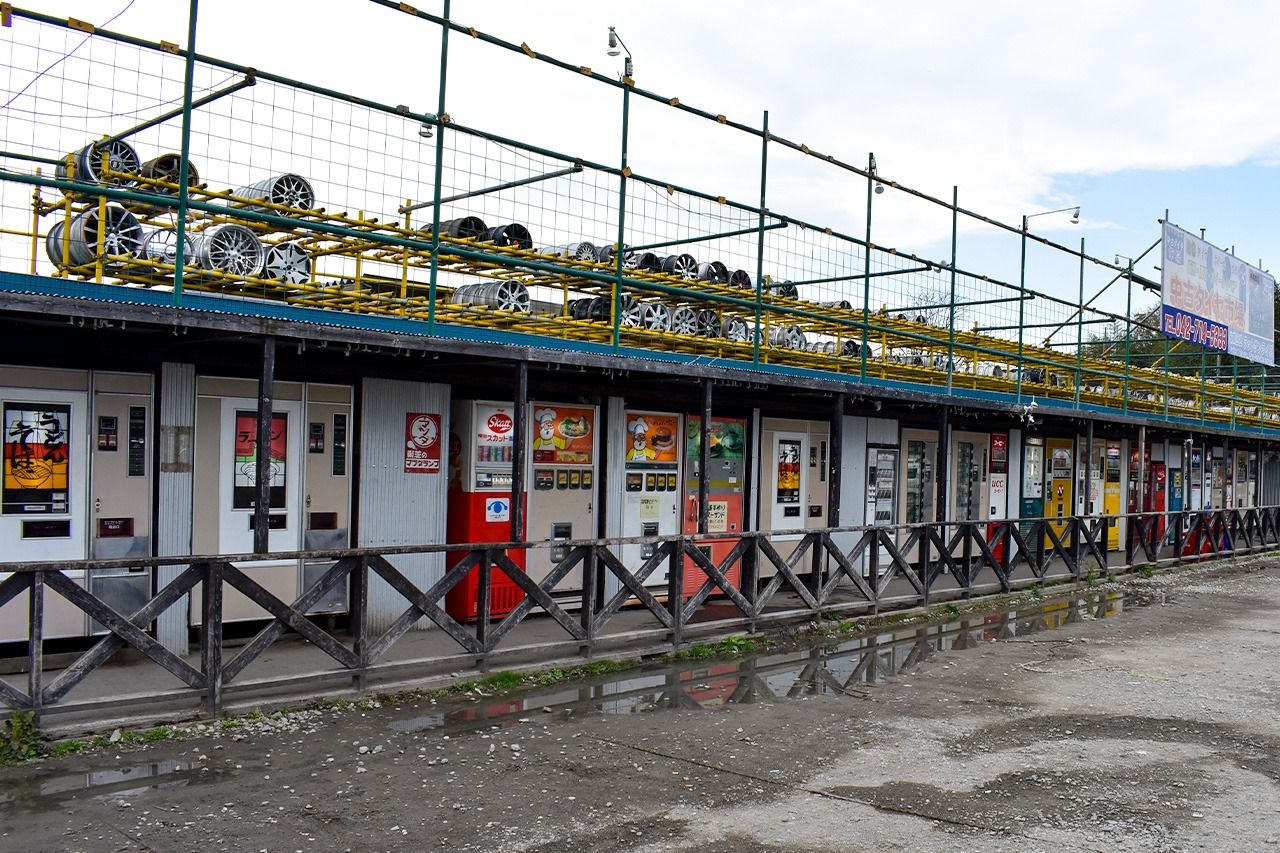 The used tire market in Sagamihara, Kanagawa Prefecture, is also a place where vending machine fans swap tips and opinions on their finds.

The number of vending machines in Japan peaked at 5.6 million in 2000, dropping to 4.0 million as of the end of 2020. This is mainly due to a rapid decline in machines selling alcohol and cigarettes, along with the rise of the ubiquitous convenience store. They also faced headwinds when after the Great East Japan Earthquake of 2011 and subsequent energy shortages, Tokyo Governor Ishihara Shintarō commented, “People can live without vending machines, which use a huge amount of power.”

“The industry had made painful efforts since before the disaster to make machines more efficient, so it was infuriating to hear them called wasteful,” Nomura recalls.

In 2011, drinks manufacturers began to focus on making disaster-ready vending machines. In case of a power cut, they carry their own temporary supply of electricity and can provide free drinks to affected areas. Other features are under development or already in action, such as machines that donate part of sales money to charity, or that have internal security cameras. In partnership with the makers of Pokémon Go, Itōen increased the number of disaster-ready machines to four times as many as in 2011. Some of the branded machines act as PokéStops, where players can find items they need, and gyms for monster battles. From April this year, local authorities have been rolling out new vending machines with different Pokémon designs in each area. 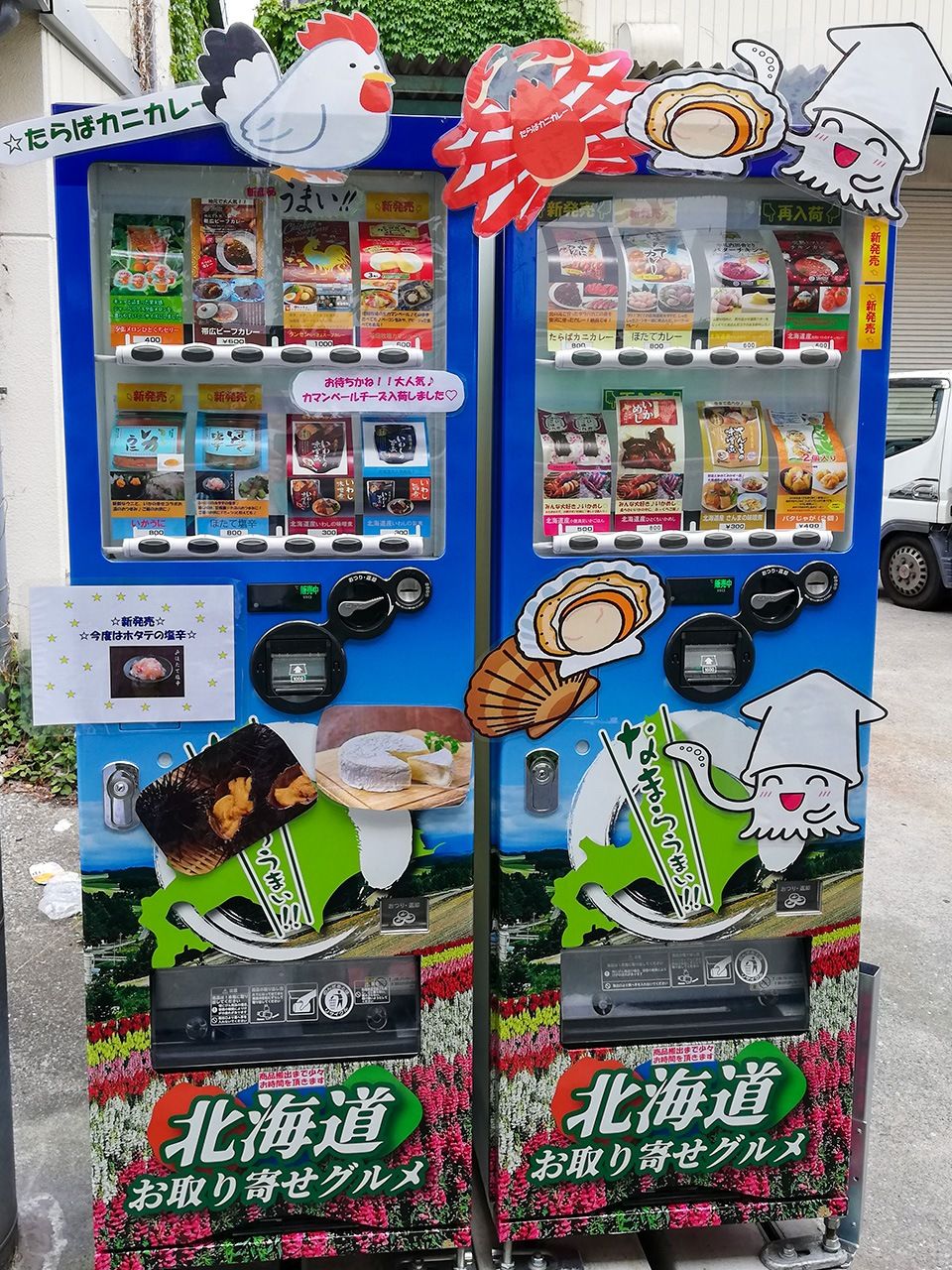 Although the golden age of vending machines may have passed, the Internet is constantly buzzing with stories about new kinds. Some of the quirkier kinds sell food models, Buddhist statues, edible insects, and drones. “There’s a vending machine for engagement rings at a jewelry store in Sendagaya, Tokyo,” Nomura says. “I heard it’s so people can make proposals 24 hours a day.” The COVID-19 pandemic has seen the appearance of machines selling masks promising a cooling sensation and PCR test kits.

Terminal 2 at Haneda Airport has popular vending machines for local specialties from seven prefectures, such as firefly squid products from Toyama Prefecture. These kinds of sales points can also turn up in unexpected places. Nomura said that he happened to find machines selling Hokkaidō gourmet foods while driving through Kawaguchi. “There was a great range from melon jelly to Camembert cheese and salted, fermented scallop shiokara.”

The Pandemic and AI

With the pandemic, vending machines face another turning point. While business has slumped at tourist spots, stations, and office buildings, there are growing efforts to find a way to leverage their potential for saving space and avoiding human contact.

Frozen ramen, including that from restaurants recognized by Michelin, is now available in machines. There have also been reports of Italian eateries installing machines for their original dressing and popular hamburger shops doing the same for their frozen burgers. The aim is to meet demand from people who want restaurant quality without the risks of eating at close quarters.

In December 2020, a Hiroshima oyster farming company called Farm Suzuki set up a machine for fried oysters in Toranomon Hills, Tokyo. As they are frozen, people can either take them out or heat them up in an attached microwave and tuck in at the eating area.

Frozen food company Nichirei Foods has entered a collaboration with NTT West to trial placement of machines offering frozen bentō in offices. One target is companies where many employees now work from home, so canteen services have shut down.

There are also companies experimenting with AI. From May, JR East Water Business has been testing AI drink vending machines at Tokyo’s Shinjuku, Ueno, Tokyo, Shinagawa, and Akihabara Stations. A character called AI Sakura-san displayed on the no-contact “touch panel” can play games with customers that may lead to drink recommendations or gift coupons. 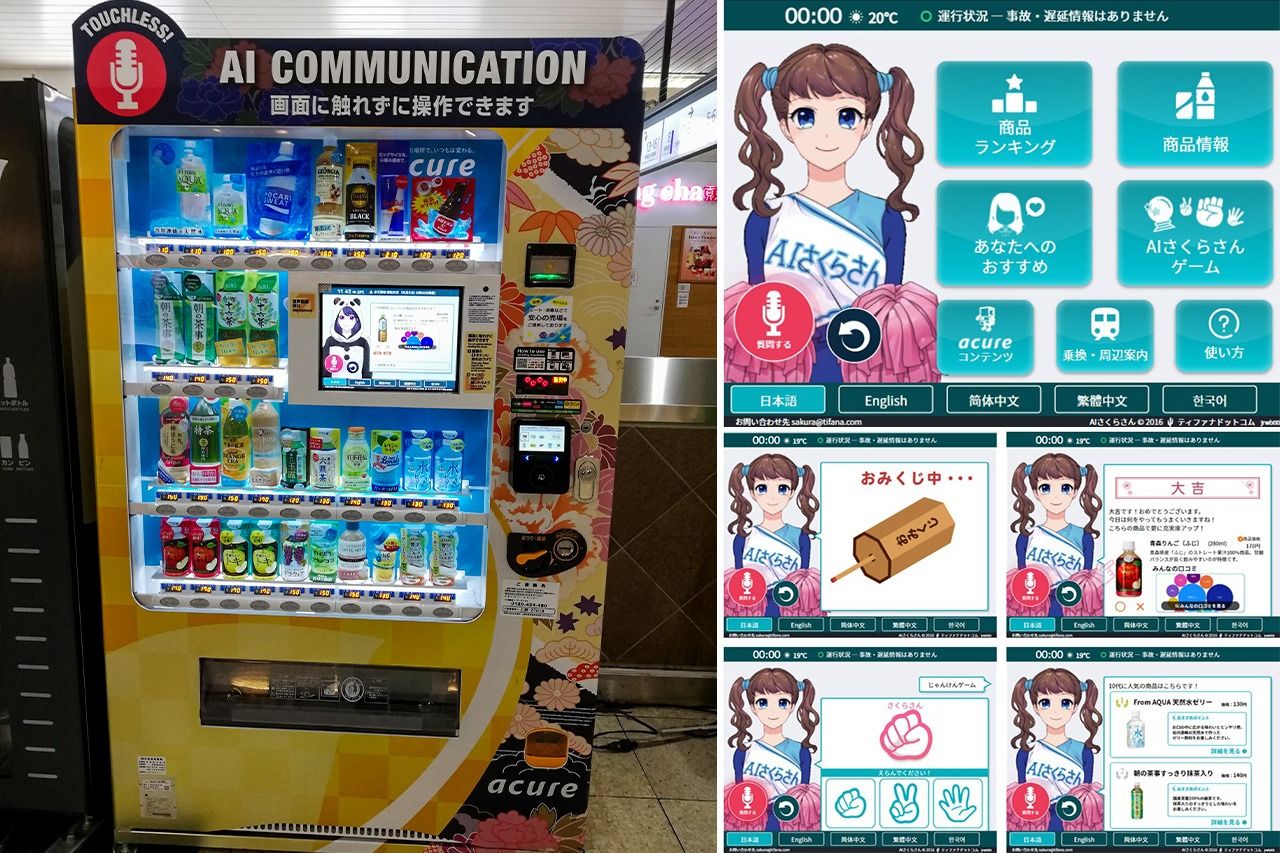 “As vending machines keep evolving, it makes me think maybe they’ll soon be able to move around,” Nomura suggests. “For example, there might be machines that can independently move, fill up with products, and then go back to where they came from. It might not be long before vending machine robots are walking around the streets.”

(Originally published in Japanese based on an interview by Itakura Kimie of Nippon.com. Banner photo: Vending machines including one selling the nostalgic product Bon Curry, at right, and Hokkaidō specialties at left. All photos © Nomura Makoto, unless otherwise indicated.)