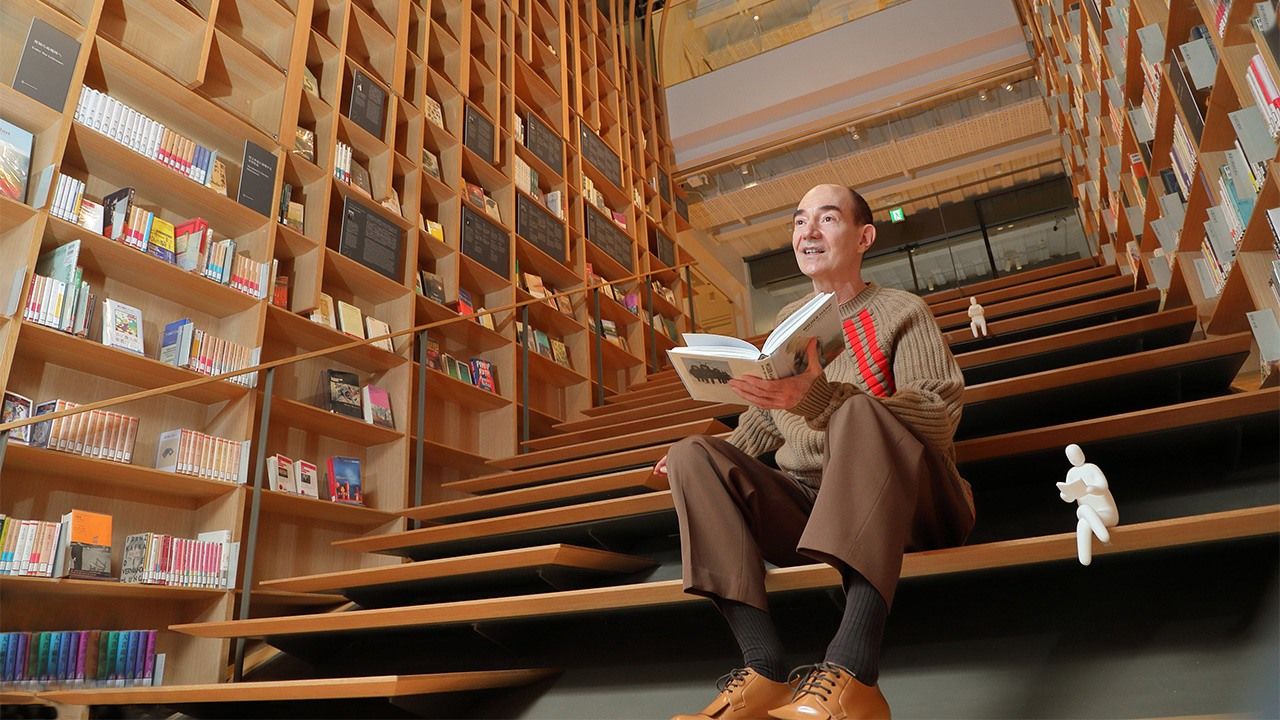 People Culture Society Education Jan 14, 2022
Robert Campbell, an advisor at the new Waseda International House of Literature (aka Haruki Murakami Library) in Tokyo, talks about how he aims to spark new creativity through events at the facility, and discusses Murakami’s international appeal. 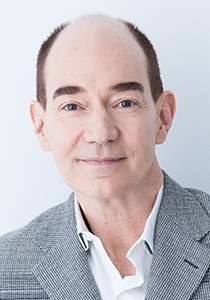 Japanese literature scholar. University professor at Waseda University. Born in New York. Graduated from the University of California, Berkeley, and received his doctorate in Japanese literature from Harvard University. Previously worked as a professor at the Graduate School of Arts and Sciences at the University of Tokyo, and director-general of the National Institute of Japanese Literature. Works include Inoue Yōsui eiyaku kashū (Collected English Translations of the Lyrics of Inoue Yōsui). Edited Nihon koten to kansenshō (Japanese Classics in a Time of Contagion) and Tōkyō hyakunen monogatari (Stories from a Tokyo Century).

In October 2021, the “Haruki Murakami Library” (officially the Waseda International House of Literature) opened its doors. Robert Campbell was appointed as advisor to the library in April, although as he notes at the start of our interview, he specializes in Japanese literature from the Edo period (1603–1868) to the Meiji era (1868–1912): “I’m not a Murakami Haruki researcher.” This allows him some freedom when thinking about how to develop the facility, which has been under the media spotlight. “I’m taking a very playful, trial-and-error approach to what we can do here.”

He did have some initial doubts about how to proceed. “There are many libraries named after deceased authors across Japan. But Murakami Haruki is very much alive, and of course he’s an active writer. At first, I didn’t know what kind of relationship he wanted with the library.”

Murakami’s motto for the facility is expressed in the phrase, “Explore Your Stories, Speak Your Heart.” He did not want it to be a place for simply honoring his own works. Instead, he wanted it to be somewhere for actively creating individual stories.

“Murakami has donated and lent valuable materials to the library that illuminate how he has constructed a life of writing over 40 years, including a collection of 10,000 LPs, and also manuscripts, photographs, and clippings. But this was only the start. Rather than just researchers and students, he wants composers, readers, musicians—all kinds of people—from Japan and around the world to meet here and create synergies through their interactions. It’s important to build a space where people can communicate with each other and resonate, instead of just broadcasting outward.”

Campbell deploys a unique metaphor to describe the author. “I picture Murakami Haruki as a grape that has fallen ripe from the vine onto the fertile vineyard of Japanese literature and linguistic culture. All sorts of microorganisms are clinging to its peel, creating new indigenous bacteria. Murakami’s works have been read across generations and translated into more than 50 languages, being received in a plethora of ways in different times, places, and countries. The fruit of 40 years has fermented to form a new nutrient or catalyst that will ideally bring forth something new.” 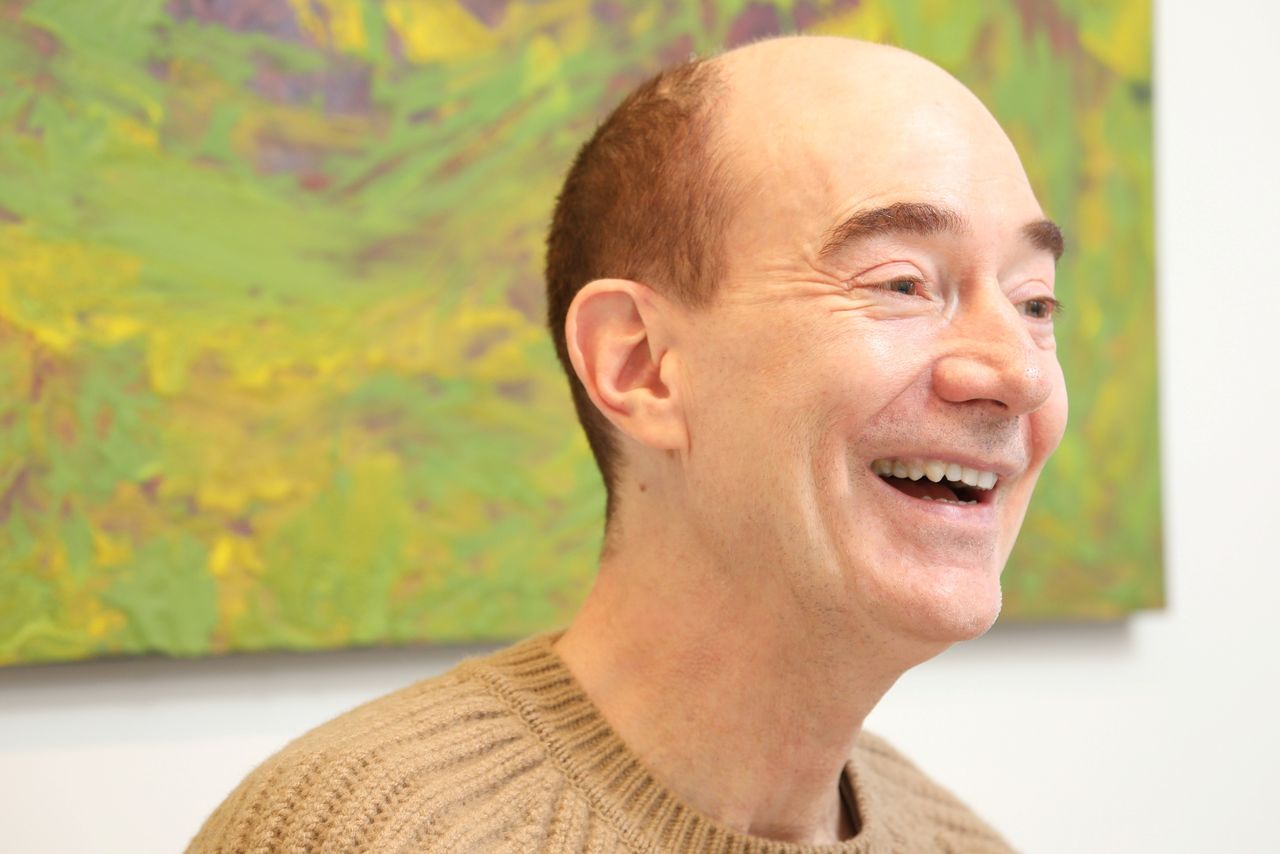 Campbell coordinated a series of Authors Alive! events held to mark the opening of the library. This included a collaboration in which Murakami read aloud, accompanied by classical guitarist Muraji Kaori. In another event, author Kawakami Hiromi and Campbell recited the same work in Japanese and English, and discussed fiction and translation. A workshop led by the poet Itō Hiromi took quotations from Murakami works as prompts, with participants providing second halves to form them into linked-verse poems. The author himself took part in events that encouraged literary and artistic discovery. At the end of 2021, there were also readings by Murata Sayaka and Asai Ryō.

“I want to build through more of these small-scale experiments. We’re editing excerpts and broadcasting them on Tokyo FM, which is a collaborator, and making them available via streaming. And rather than just filing these away in an archive, I’d like them to act as sparks in a variety of settings to create some small explosions.”

For future sparks, Campbell could draw on his own experiences. After the Great East Japan Earthquake in 2011, he held reading groups at Naruko Hot Springs in Miyagi Prefecture, where many displaced people found shelter. The response left a deep impression.

“In times of emergency, the top priorities are to eat and stave off cold. But for people who’d enjoyed reading for so long, it was very hard for them to be cut off from that habit. The group members read the same short stories, discussed them, and took turns to read them out loud together. I saw individual short stories help strangers to know each other and feel at ease.”

“At the library too, I want reading to be a way for people to engage with each other, and to set off personal changes.” 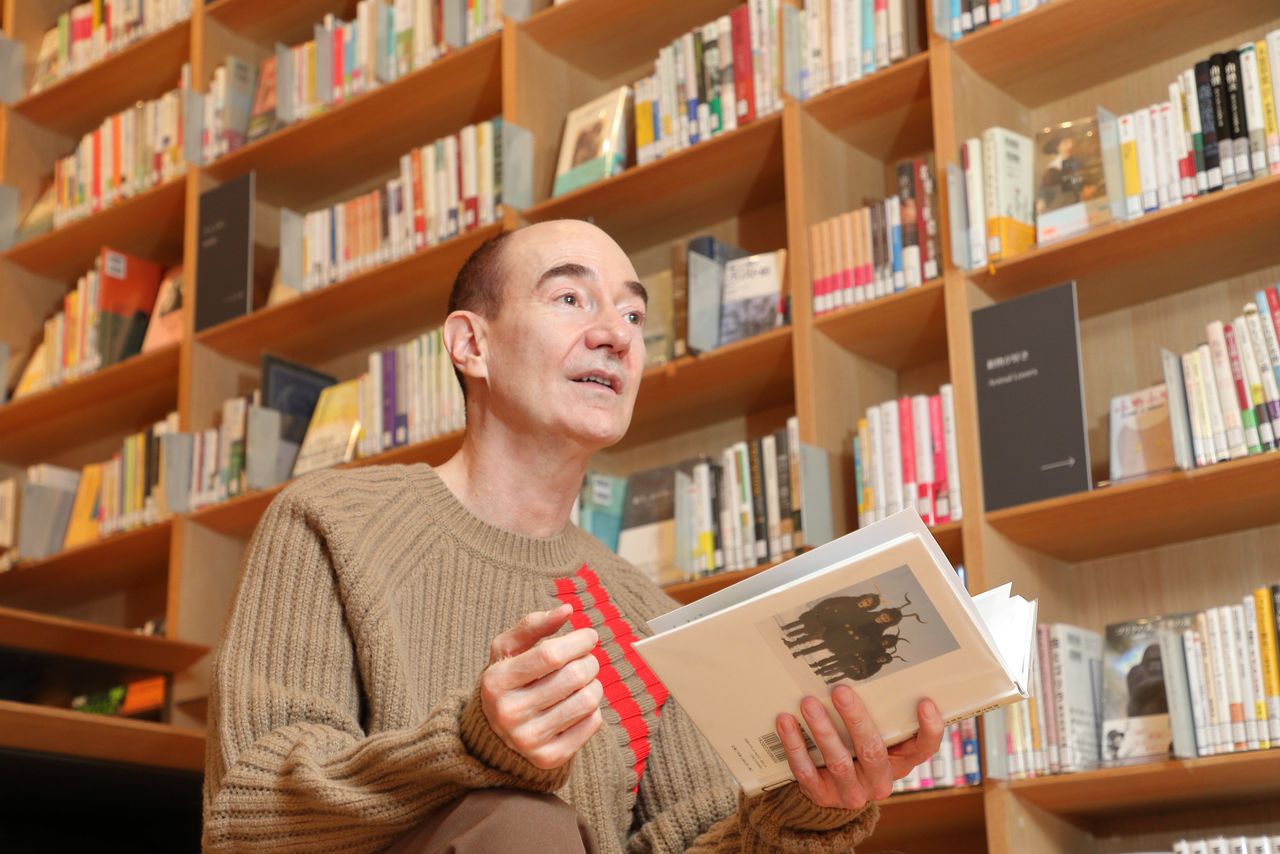 In four years as director-general of the National Institute of Japanese Literature, Campbell kept its resources active rather than simply archived, sharing them with many readers. He would also like to apply this experience.

“During the pandemic last year, I wondered if Japan’s historical experiences might provide a different perspective on infectious disease. Since ancient times, disease has formed the material for art and literature, or the motivation for creation. For example, losing someone close as the result of disease is there in the background of Izumi Shikibu’s diary and Sarashina Diary from the Heian period [794–1185]. Using the considerable resources of the NIJL, I made the video Japanese Classics in a Time of Contagion in both Japanese and English. There was a big reaction, particularly from overseas, with some teachers wanting to use it as a teaching resource. The film led to me editing a book on the topic in which several researchers brought fresh light to literary history by writing on the shared theme of disease from the ancient Man’yōshū poetry anthology to Natsume Sōseki.”

Campbell has other plans for bringing people together and creating ripples in his new job.

“From my years researching classic literature, I want to use my connections with people in the field to expand the library network. At the same time, it’s important to improve multilingual access in a lot of areas.”

There are translations of Murakami’s works in more than 50 languages in the library. His 2020 short story collection Ichininshō tansū has already been rendered into English (trans. by Philip Gabriel as First Person Singular) and Korean, and fans around the world are always eagerly awaiting his latest books. How does Campbell rate Murakami’s oeuvre? 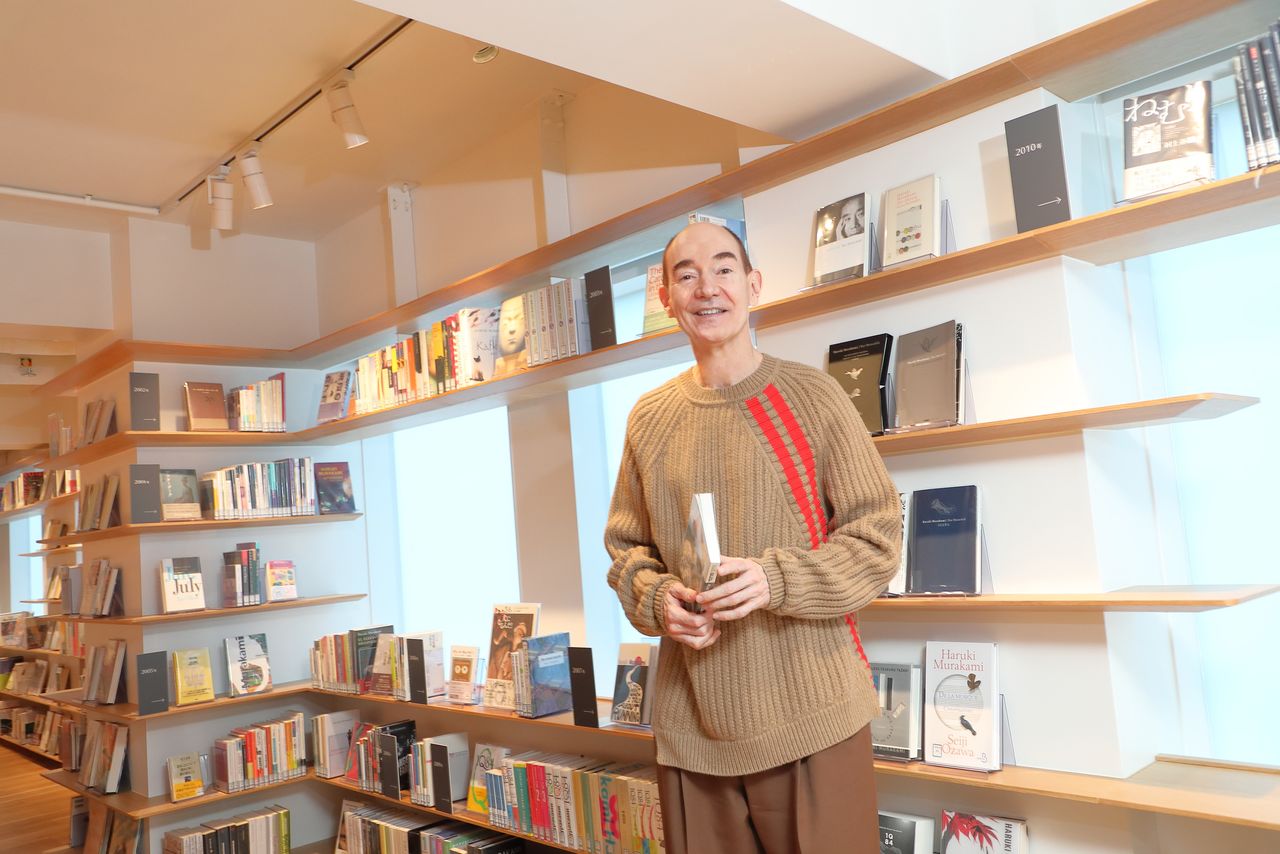 The gallery lounge displays many of Murakami’s works in Japanese and other languages.

“Works by Kawabata Yasunari and Tanizaki Jun’ichirō and other modern Japanese literature were received overseas through the filter of Orientalism. For example, Kawabata’s Izu no odoriko [trans. The Izu Dancer], Yukiguni [trans. Snow Country], and Yama no oto [trans. The Sound of the Mountain] [all translated by Edward Seidensticker] center on Japanese views of life and death, and the natural world. It seems like Murakami Haruki skipped over that step to write from a different space.”

Campbell says that his first encounter with Murakami came when he read the Japanese version of Noruwei no mori [trans. by Jay Rubin as Norwegian Wood] in the late 1980s. “As I turned the pages, it conjured up all sorts of scenes of Japan from the Shōwa era [1925–89], but this didn’t form the central theme. People from Japan or other countries were drawn in as individuals and could see themselves in the protagonist.

“There’s also the historical background. When Murakami first came to international attention in the late 80s, democratic movements were active around the world. For example, there were major student uprisings in South Korea, in which many were killed. A generation riven by fissures in an age of turmoil was moving toward shaping civil society based on new values, while at the same time Murakami’s books were winning a huge following among the country’s youth. In China as it opened up in the late 80s and in Eastern Europe during the revolutions that led to democracy after the collapse of Soviet power in 1989, young people were gripped by Murakami’s fiction.

“It’s not especially political, and it doesn’t definitively make violence, conflict, or disparities its main focus. But I feel readers could share an appreciation of how it exposes the contradictions and deceit of the society formed by older generations, and depicts the resistance and feelings of powerlessness of the young.

“Since the 90s, Murakami’s books have filled shelves in airport bookstores all over the world, but they’re not categorized as Japanese literature. He’s the first Japanese author to succeed in conveying his stories without carrying the burden of various national qualities or historical messages. This surely makes him notable within world literature.”

Now in the 2020s, many are feeling helpless in the face of the COVID-19 pandemic and social divides. What light can literature shine here? Murakami looks set to collaborate with the library named for him in the search for answers.

(Originally written in Japanese by Kimie Itakura of Nippon.com. Banner photo: Robert Campbell sits on the stairs between the basement level and first floor of the Waseda International House of Literature. Architect Kuma Kengo imagined a Murakami-style tunnel between the everyday and “another world.” Various “little people” are posed around the stairs. Photographs by Hanai Tomoko.)