Culture Feb 9, 2017
A portrait of Natsume Sōseki, Japan’s most highly regarded modern author, 150 years after his birth. Skilled in both the traditional learning of classical Chinese and the newly fashionable English, Sōseki transformed Japanese literature in the early twentieth century. In classic works like Kokoro, his characters grapple with the pains of egoism and isolation.

Japan’s leading modern novelist Natsume Sōseki was born 150 years ago, on February 9, 1867. He passed away shortly before his fiftieth birthday, on December 9, 1916; last year Japan marked the centenary of his death. Despite their age, his works remain fresh and full of life for contemporary readers, and they have been translated into many languages. Having lived through a period when the country stepped onto the international stage, Sōseki could be described as Japan’s first writer of world literature. 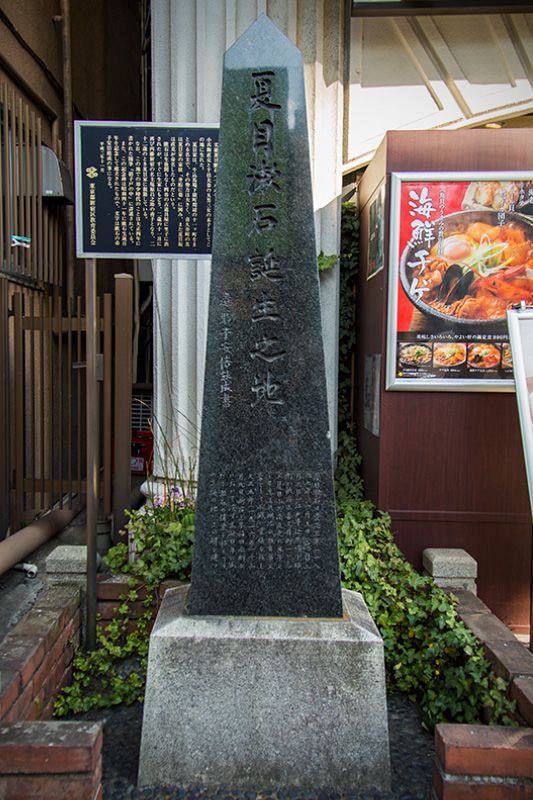 Natsume Kinnosuke was born in the city of Edo in 1867, the year before it was renamed Tokyo. With the end of the Edo period (1603–1868), Japan would rapidly develop under the new Meiji government. The future writer was the eighth child of Natsume Naokatsu and the sixth with his wife Chie. Rather than raise the young Kinnosuke themselves, his parents sent him away to grow up with another couple who were friends of the family. The loneliness he experienced during a difficult childhood may have contributed to his later spirit of independence.

Alongside his standard education, he studied the Chinese classics and English at intensive schools. At the age of 17, he entered preparatory school for university. There he met Masaoka Shiki, who would become another key literary figure by modernizing the haiku. From 1890, he spent three years in the English department at the University of Tokyo.

At first, Sōseki had hated English. He greatly preferred classical Chinese, and had a lifelong love of the nation’s traditional literature. His pen name derives from sōseki chinryū, the Japanese rendering of a Chinese proverb meaning “stubbornly unwilling to accept defeat.” In an era when many Japanese were abandoning long-established texts to study European languages, Sōseki’s classical Chinese learning was more reminiscent of an intellectual of the Edo period.

Even so, English became another string to his bow, and he learned enough of the language to begin teaching it to others while still a student. From 1893, he balanced postgraduate activities with instruction at a Tokyo teacher’s college. Jūdō founder Kanō Jigorō, who was head of the college, took a liking to Sōseki and entreated him to accept the position. Around this time, Sōseki also studied Zen meditation in Kamakura.

Travels in Japan and Abroad

In 1895, he left Tokyo for a job at a school in Matsuyama in Ehime Prefecture. This small city on the southern island of Shikoku was the hometown of his friend Shiki, who suffered from tuberculosis and had returned to convalesce. The two devoted their spare time to haiku, composing verse at poetry gatherings. Sōseki’s teaching experiences in Matsuyama also formed the basis for one of his early successes, the comic novel Botchan. In 1896, he moved to Kumamoto Prefecture, where he married Nakane Kyōko. 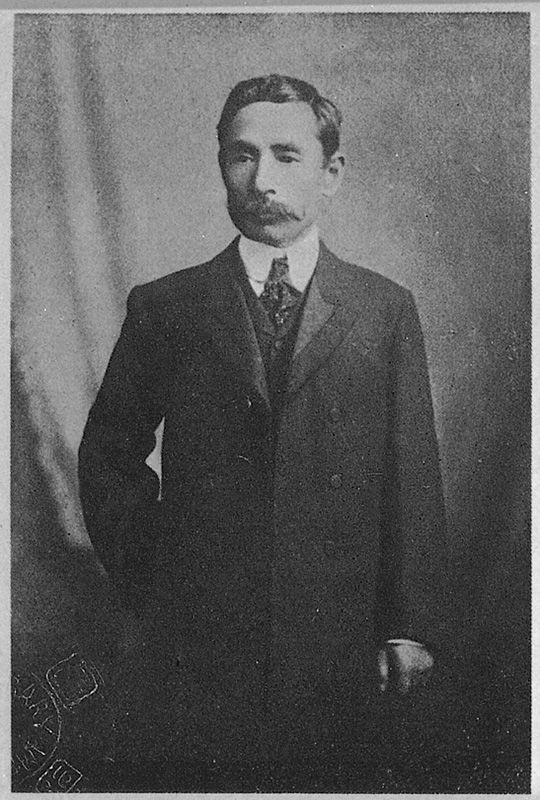 Natsume Sōseki and his trademark mustache. (Courtesy of the National Diet Library)

The Meiji government brought an end to this provincial life in 1900, as the education ministry sent Sōseki to Britain to study English. While there he spent two months living with Ikeda Kikunae, the chemist who coined the name for the “fifth taste,” umami, and patented monosodium glutamate. Ikeda’s learning extended to a deep knowledge of philosophy, which made for stimulating intellectual discussions.

In his final year in Britain, Sōseki spent every moment in study. His intense inquiry into the nature of literature later bore fruit in the critical work Bungakuron (trans. Theory of Literature). However, the mental strain of his life overseas was considerable, such that the ministry of education even doubted his sanity for a period. 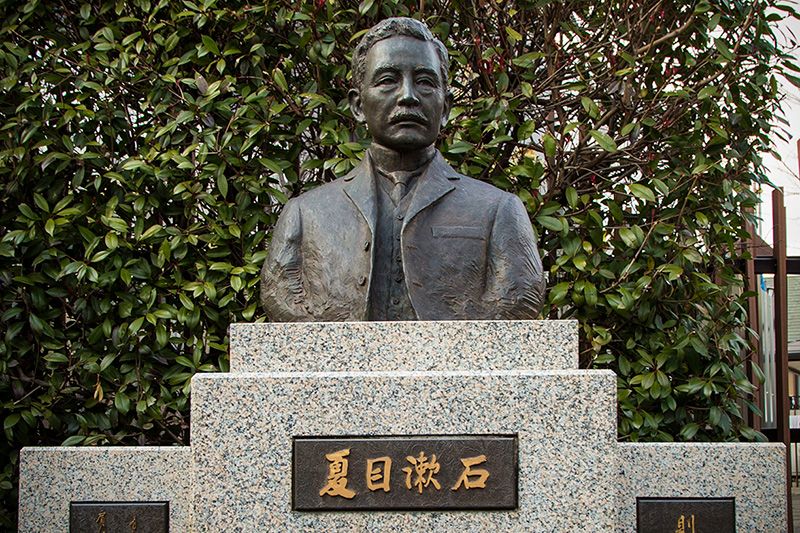 A bronze statue of the author in Sōseki Park, in the Waseda Minamichō area of Shinjuku where he spent his last days.

After returning to Japan in 1903, he relocated to Tokyo, teaching at the First Higher School and at Tokyo Imperial University, today’s University of Tokyo. Two years later, he made a literary splash with the publication of the first part of one of his most enduring works, Wagahai wa neko de aru (trans. I Am a Cat). It appeared in Hototogisu, a magazine launched by his friend Shiki and edited by the haiku poet Takahama Kyoshi. The warm reception of this serial novel, along with works like Rondon tō (trans. The Tower of London) and Botchan, made Sōseki’s name as a fiction writer. 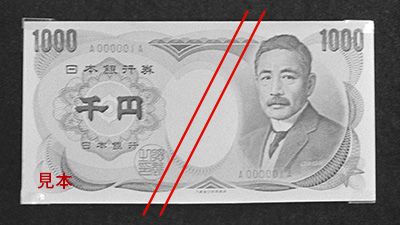 He began to hold Thursday meetings at which literary disciples gathered, including a young Akutagawa Ryūnosuke. In 1907, he quit teaching to join the Asahi Shimbun newspaper as a full-time serialist. The move became the talk of Tokyo—at the time, leaving Japan’s top academic institution to become a professional writer was considered an extraordinary decision. Among the works he serialized in Asahi Shimbun were Sanshirō, Sorekara (trans. And Then), and Mon (trans. The Gate), which are collectively known as his first trilogy.

Sōseki was hospitalized by a stomach ulcer at the age of 43. While recuperating at a hot spring resort in Shizuoka Prefecture, his condition became critical. Friends and literary followers rushed to his sickbed, believing that he was near death.

He recovered, though, and in 1911 the ministry of education wasted no time in bestowing an honorary doctorate on Sōseki while he was still hale. He declined it, however, despising the contemporary spirit of studying merely to acquire such forms of recognition.

From 1912, Sōseki’s second trilogy—Higan sugi made (trans. To the Spring Equinox and Beyond), Kōjin (trans. The Wayfarer), and Kokoro—was published serially in Asahi Shimbun. Around this time, his ulcer problems flared up again and his mental state deteriorated. He began a new work, Meian (trans. Light and Darkness) in 1916, but died on December 9 of the same year, leaving his final work unfinished. 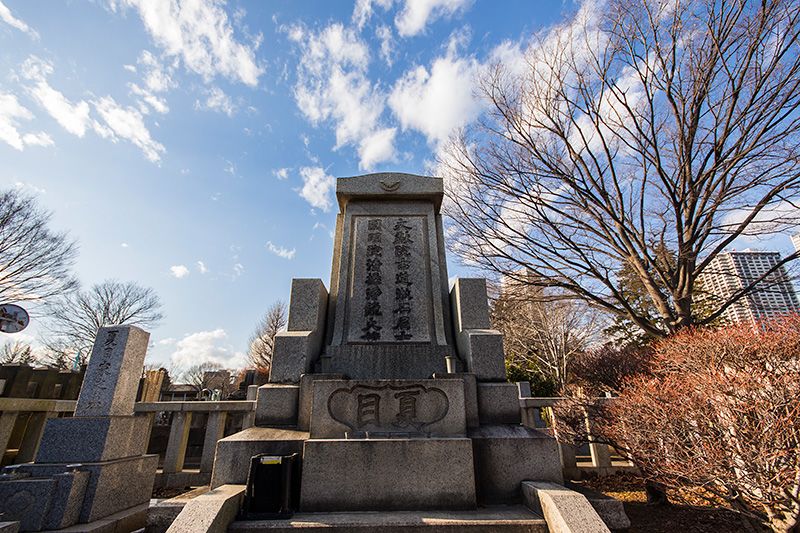 The Pains of Self-Centeredness

Sōseki’s novels move from an examination of egoism and the isolation and suffering this causes to attempts to abandon the self.

In the humorous novel I Am a Cat, the titular feline observes the habits of the curious group of intellectuals who gather in the home of its owner. The novelty of the cat narrator and its lively anecdotes, influenced by rakugo stories, caught the interest of readers, firmly establishing Sōseki as a novelist. Another early novel, the 1906 Kusamakura, tells the story of an artist who cannot stand the overly civilized atmosphere of Tokyo. He heads for a hot spring resort, where he seeks to remove himself from the involvements of a rapidly modernizing world and immerse himself in emotionally detached art.

Sanshirō concerns the love of a naïve young man, struggling with the uncertainties of youth. The other two books in Sōseki’s first trilogy depict love triangles. In And Then, a leisured intellectual who is the son of a man of property becomes infatuated with his friend’s wife, and determines to live a life of independence. The protagonist of The Gate is a public official living quietly with his wife—who was formerly married to his close friend—and grappling with feelings of guilt.

His second trilogy further probes into the themes of egoism and isolation. It culminates in Kokoro, Sōseki’s most widely read work. Extracts from the novel are a staple of high school textbooks. The core of the story is told in a letter to the unnamed narrator, written by Sensei—a character known only by this term of respect. While a student, Sensei betrayed his friend K to win his present wife. Driven to despair, K killed himself. Sensei has lived with the anguish of this act for many years, and the death of Emperor Meiji leads him to the decision to commit suicide in his turn.

Toward the end of his life, Sōseki sought to find a way to go beyond self-centeredness and live according to nature following an idea he termed sokuten kyoshi. In what became his unfinished final novel, Light and Darkness, he is believed to have planned to first examine egoism through a discontented married couple before depicting the abandonment of the self. His Zen experiences are thought to have been the basis for the sokuten kyoshi concept. 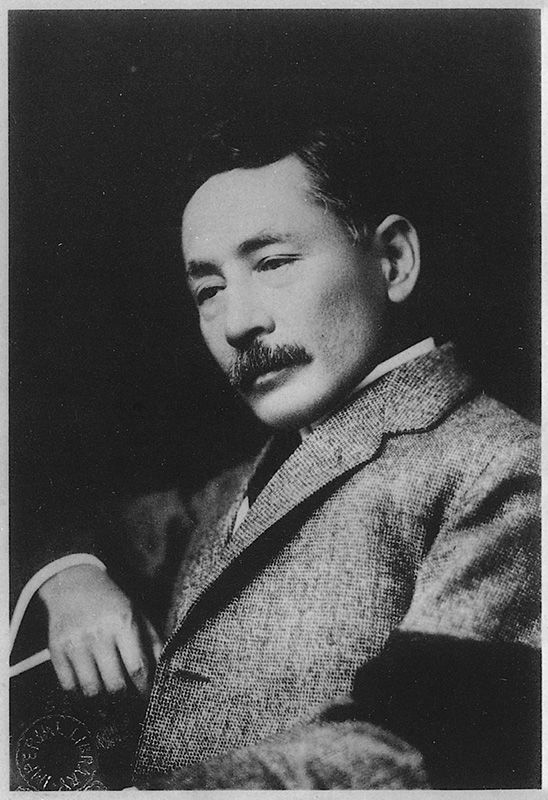 Natsume Sōseki at 45, wearing a black armband to mourn the death of Emperor Meiji in 1912. (Courtesy of National Diet Library)

Sōseki as a World Author

Despite his central position in Japanese literature, it has taken some time for Sōseki to be recognized in the West, where he is still not as well-known as authors like Kawabata Yasunari and Mishima Yukio. His reputation has risen in recent years, however, with several new translations into English and increased research.

The British translator and critic Damian Flanagan, who published The Tower of London in 2005, compares Sōseki to Shakespeare. Michael K. Bourdaghs, an American professor of Japanese literature, ranks Sōseki alongside Lu Xun, Franz Kafka, and James Joyce as a pioneer of twentieth-century literature. He also sees Theory of Literature as having been one of the first works to take a psychological and sociological approach to the question of what literature is.

By contrast, Sōseki has long been known in China as Japan’s most famous author. Lu Xun translated two works in the early twentieth century, and his younger brother Zhuo Zuoren also introduced Sōseki’s literature. Now nearly all his works are translated into Chinese, including almost 20 versions of I Am a Cat.

Sōseki’s deep knowledge of Chinese literature and his more than 200 poems and other works written in classical Chinese contributed to his popularity in the country. His thematic concern with the state and society seems to have fostered a sense of affinity among Chinese readers. The figure of the Japanese intellectual living through a turbulent period of modernization and Westernization has also drawn empathy.

Due to the historical background of colonization, Japanese literature has faced a hard road to acceptance in South Korea. It was only in the 1990s that Sōseki began to be widely read, but his complete works have now been published in Korean in 14 volumes.

Now that 150 years have passed since his birth, the spotlight has fallen on the author once again. It is an opportunity to reassess him as both a Japanese and a world author. 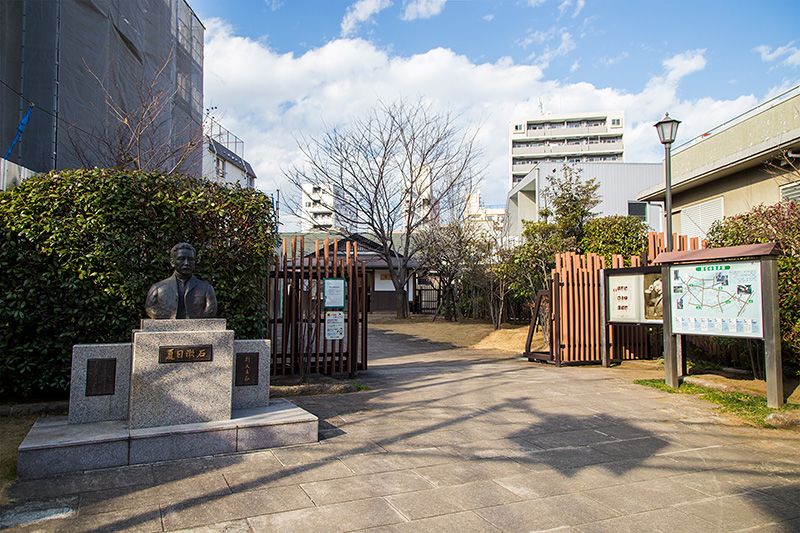 A new museum devoted to the author is being built next to Sōseki Park in Shinjuku. It is scheduled to open in September 2017.