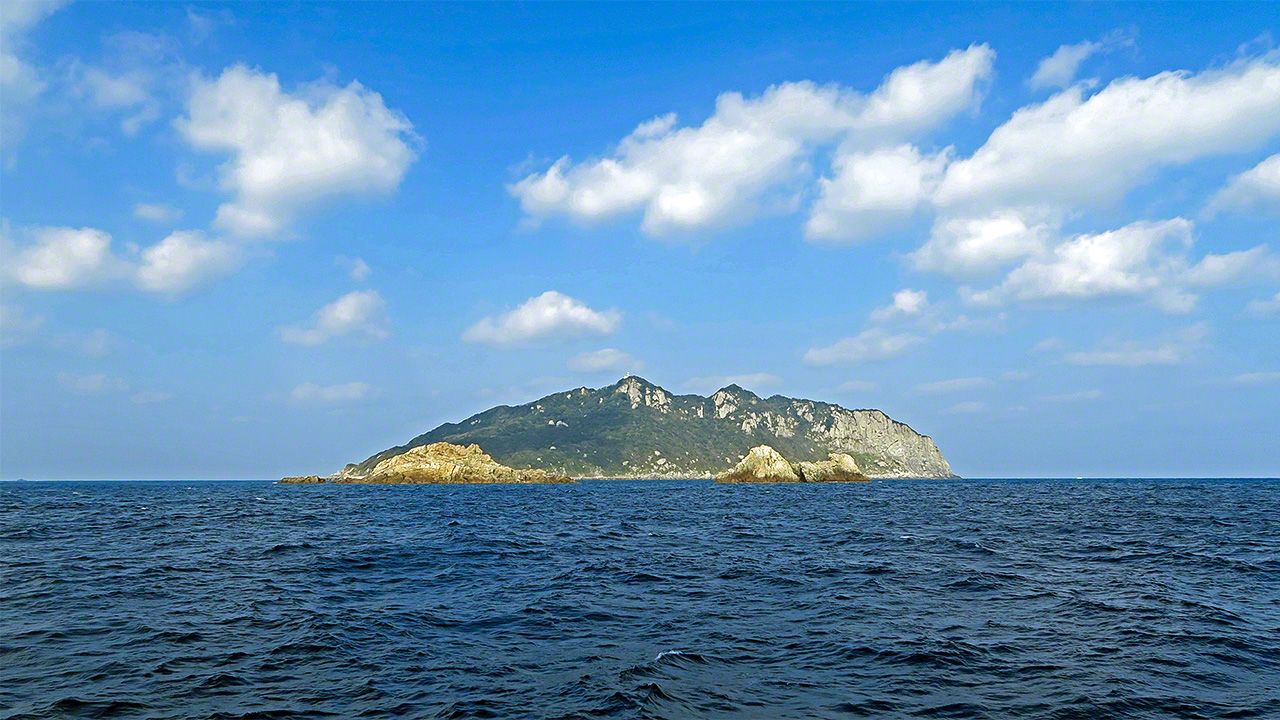 History Travel Culture Imperial Family Dec 1, 2022
Okinoshima Island and Related Sites in the Munakata Region were inscribed as a World Heritage site in 2017. The value of this shrine complex lies in its ancient religious practices that have been preserved and passed down over the centuries.

At the Munakata shrines, located in the city of Fukuoka, the way of thinking regarding kami was influenced by features of the natural environment: the Genkai Sea, the islands on which two of the three shrines are located, and the area’s sandy shores. Ancient peoples felt the presence of kami in the manifestations of nature peculiar to the area, but the rituals connected with worship of the kami of Munakata were not confined to northern Kyūshū. Indeed, those rituals were intimately connected with the formation of ancient Japan’s polity and political conditions in the East Asia of the era.

Both Kojiki (Records of Ancient Matters), Japan’s oldest extant chronicle of myths and genealogies, dating from around 712, and Nihon shoki (Chronicle of Japan), the country’s oldest historical record, written around 720, contain references to the kami (objects of worship) of Munakata. Amaterasu-ōmikami, traditionally held to be the progenitor of Japan’s imperial line, and her brother Susanoo-no-mikoto exchanged possessions, giving birth to male and female kami. The three female kami of Munakata were born from the sword of Susanoo, and male kami who later became progenitors of the imperial line were born from the jewel of Amaterasu. The kami of Munakata thus appeared at the most important moments in the myths related by the two ancient texts.

According to those texts, three female kami were enshrined: Tagorihime at Okitsumiya, on the distant island of Okinoshima; Tagitsuhime at Nakatsumiya, on the nearby island of Ōshima; and Ichikishimahime at Hetsumiya, onshore in northern Kyūshū. 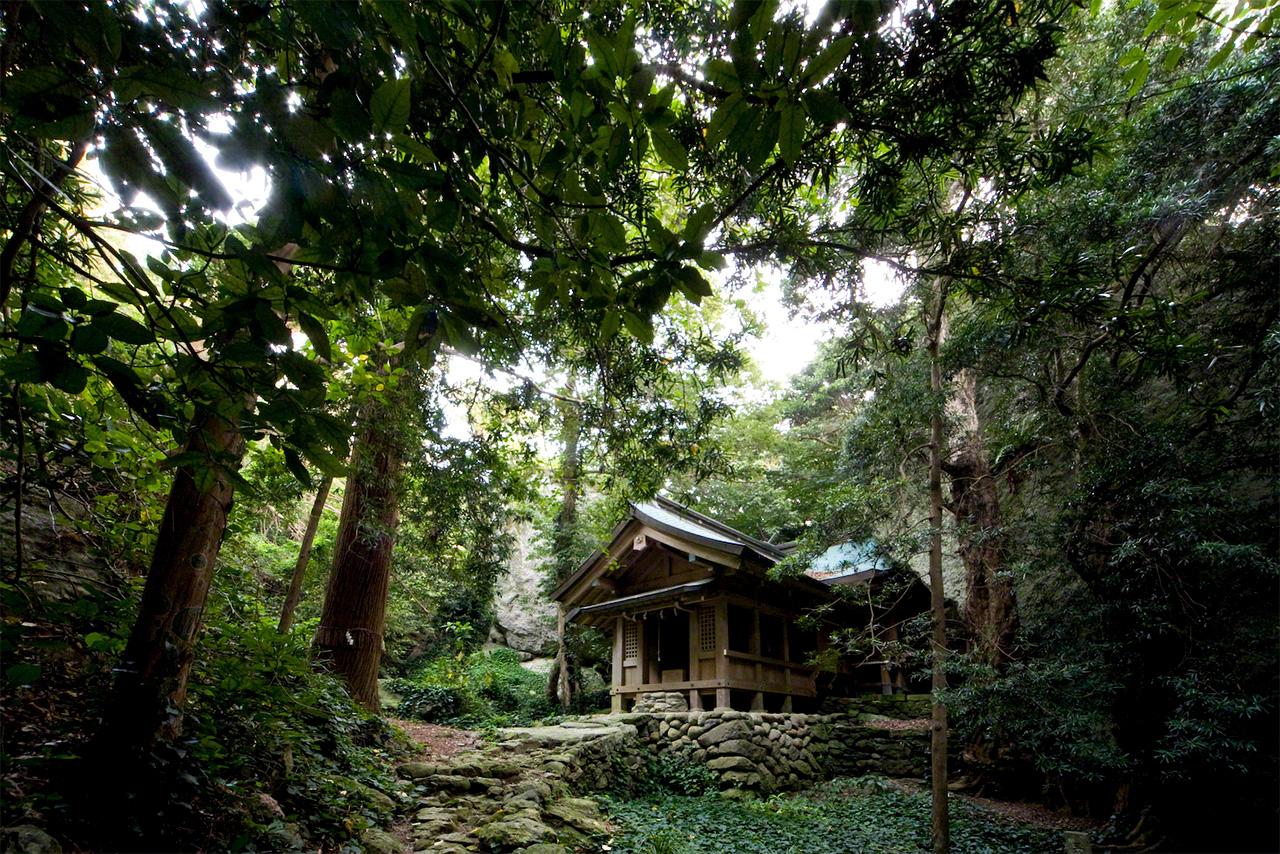 The main hall and prayer hall of Okitsumiya on Okinoshima. (Courtesy of Munakata Taisha) 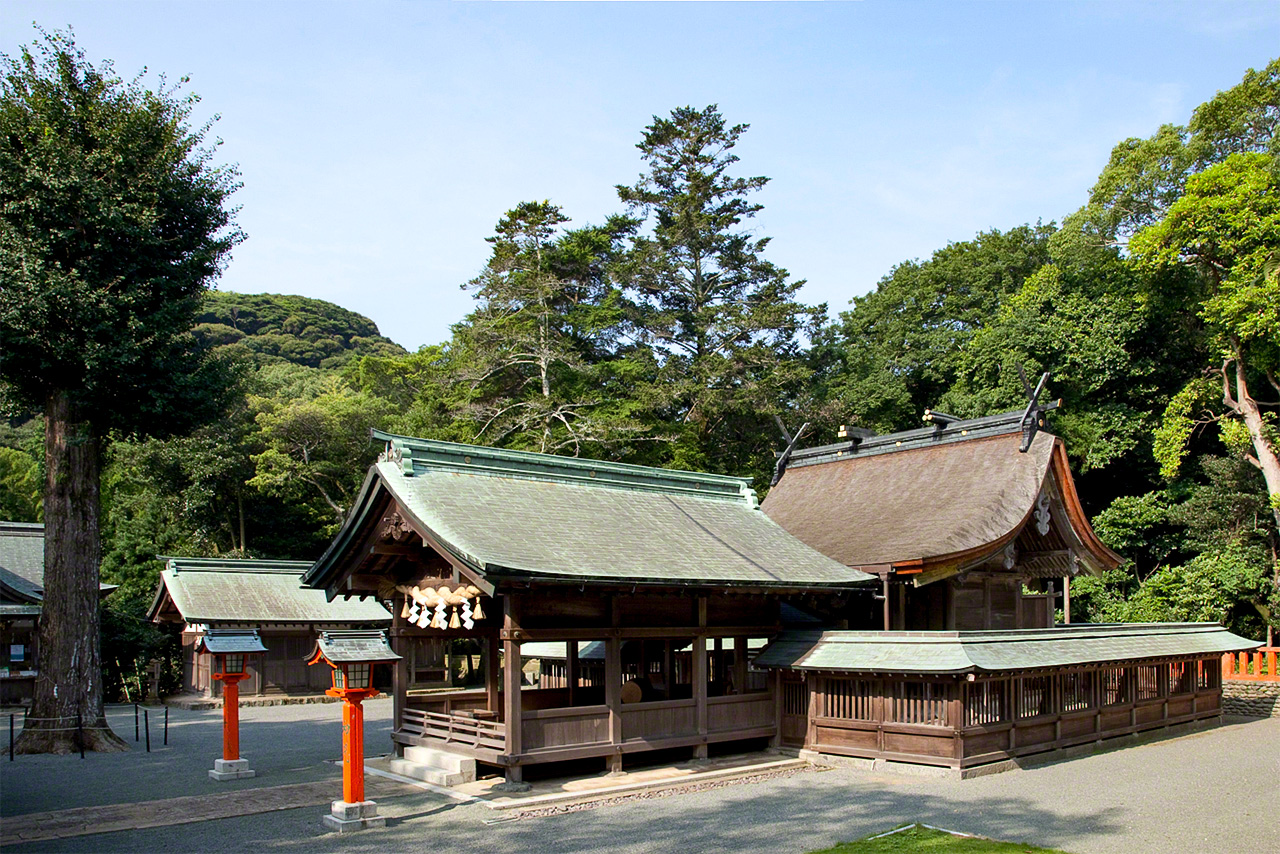 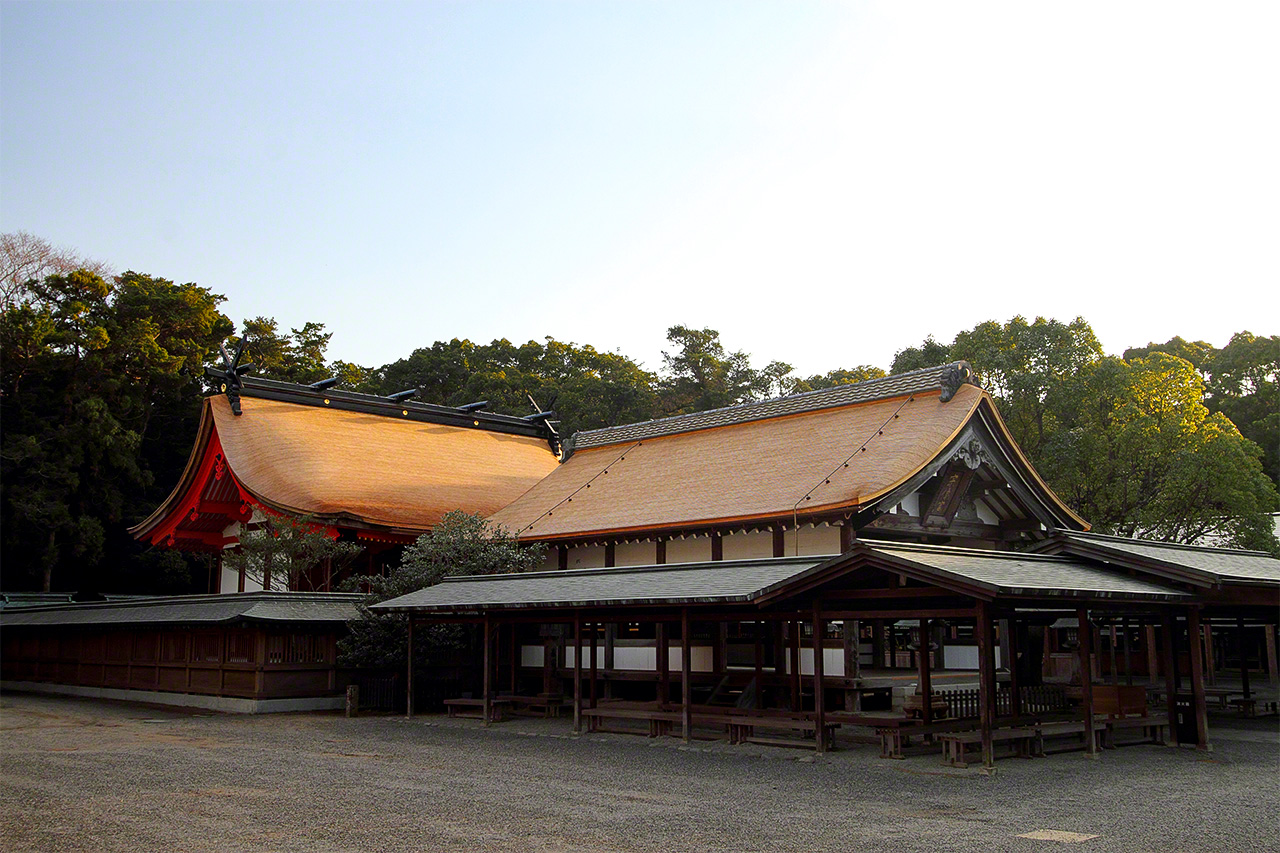 The main hall and prayer hall of Hetsumiya, in the city of Munakata, Fukuoka. (Courtesy of Munakata Taisha)

Okinoshima is a small island roughly 1 kilometer wide from east to west. Its highest point, Ichinodake, is a gleaming white crag rising 243 meters above the sea. Visible from afar, the peak would have been a landmark to mariners traveling between the Korean peninsula and Japan. Okinoshima also has fresh water. Although today only Shintō priests are allowed to set foot on the island, in earlier times it would have been a precious source of water for those sailing across the Genkai Sea. Furthermore, if voyagers from Korea peninsula setting out from Okinoshima aimed for Ōshima, the site of Nakatsumiya, in an otherwise featureless open sea they could be assured they were heading in the right direction to reach the Kyūshū mainland. 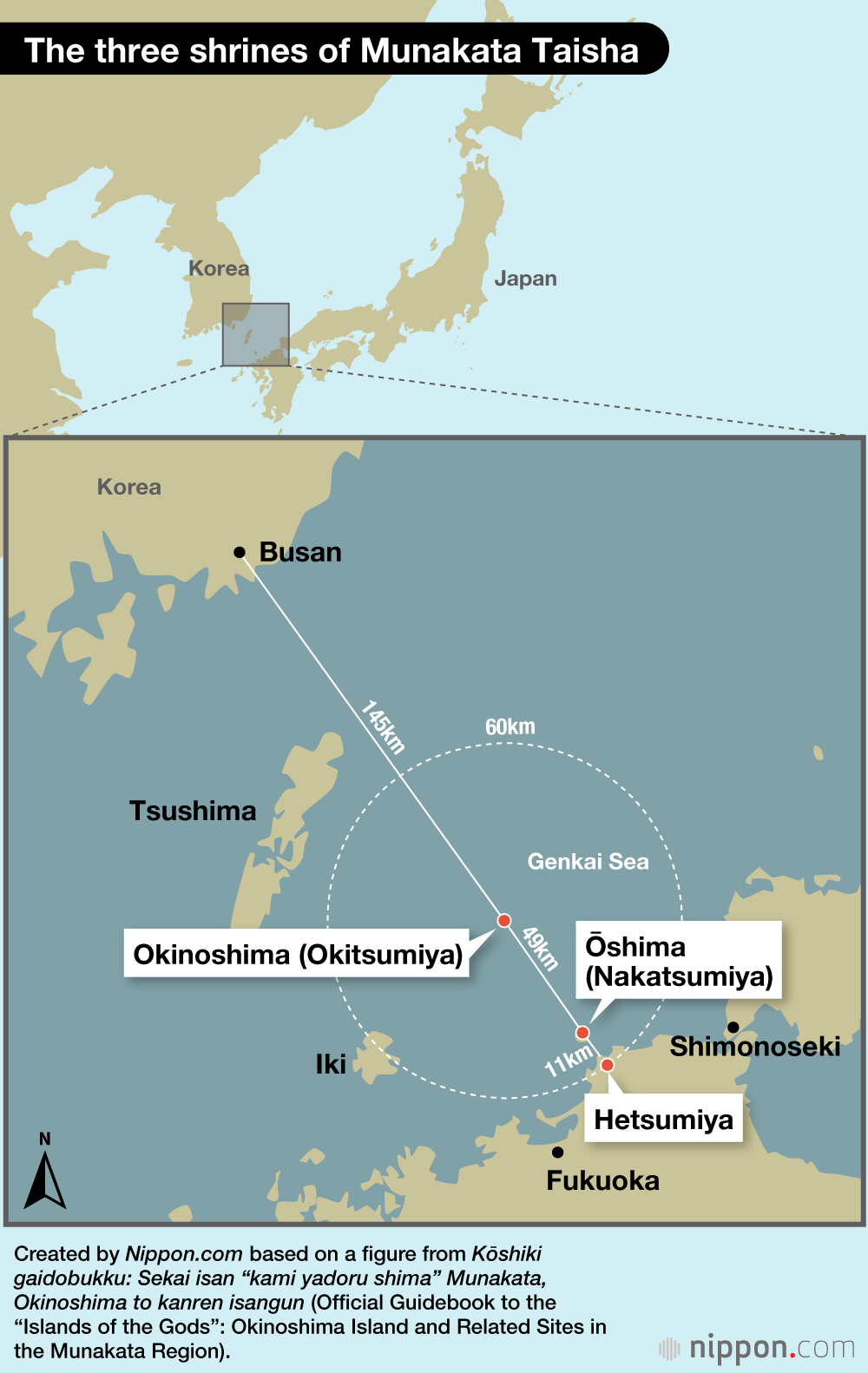 Whereas the two other shrines of Munakata are on small islands, Hetsumiya stands at the river mouth of the Tsurikawa. In ancient times, the area was probably a large lagoon, with the shrine built facing the water. This matches the description in Nihon shoki of the shrine being “on the seashore.” The waters of the lagoon, bordered by sea on one side and sand dunes on the other, were placid and offered a perfect ship anchorage. The instinctive feeling that nature, in the form of the islands and the shore, reflected the presence of spirits developed into worship of the three kami of Munakata to give thanks for their protection and pray for safety at sea.

The three shrines of Munakata lined up to form the shortest sea route between the Yamato imperial court, based in Nara, the center of power in Wakoku—as Japan was identified by the Chinese court and neighboring countries at the time—and the Korean peninsula. It is clear from archaeological finds dating from the latter half of the fourth century CE that political developments in East Asia at the time made the route passing through Okinoshima and Ōshima as important as the sea route via the islands of Tsushima and Iki.

In 317, conditions in East Asia became unsettled when China’s Western Jin dynasty collapsed. Then came the Sixteen Kingdoms period, followed by the era of the Northern and Southern dynasties (304–589), leading to more turmoil. On the Korean peninsula, conflict escalated between the three kingdoms of Goguryeo, Baekje, and Silla in the fifth century. Wakoku had relations with Baekje but increasingly clashed with Goguryeo. Exchanges between Japan and Korea grew, but discord with Goguryeo escalated into armed conflict. Under those conditions, the sea route through Munakata, a direct line to the embattled Silla and Baekje territories at the south of the Korean peninsula, rapidly gained importance.

It was during that time that religious rituals began to be performed on Okinoshima. Remains of those rituals have been found on the island’s south-facing slope, 85 meters above the sea. Thirteen large boulders on the slope were surrounded by ritual offerings that had been secreted in rock crevices, placed atop the rocks, or left in the open air. The boulders may have represented the kami of the island or indicated their sacred realm. 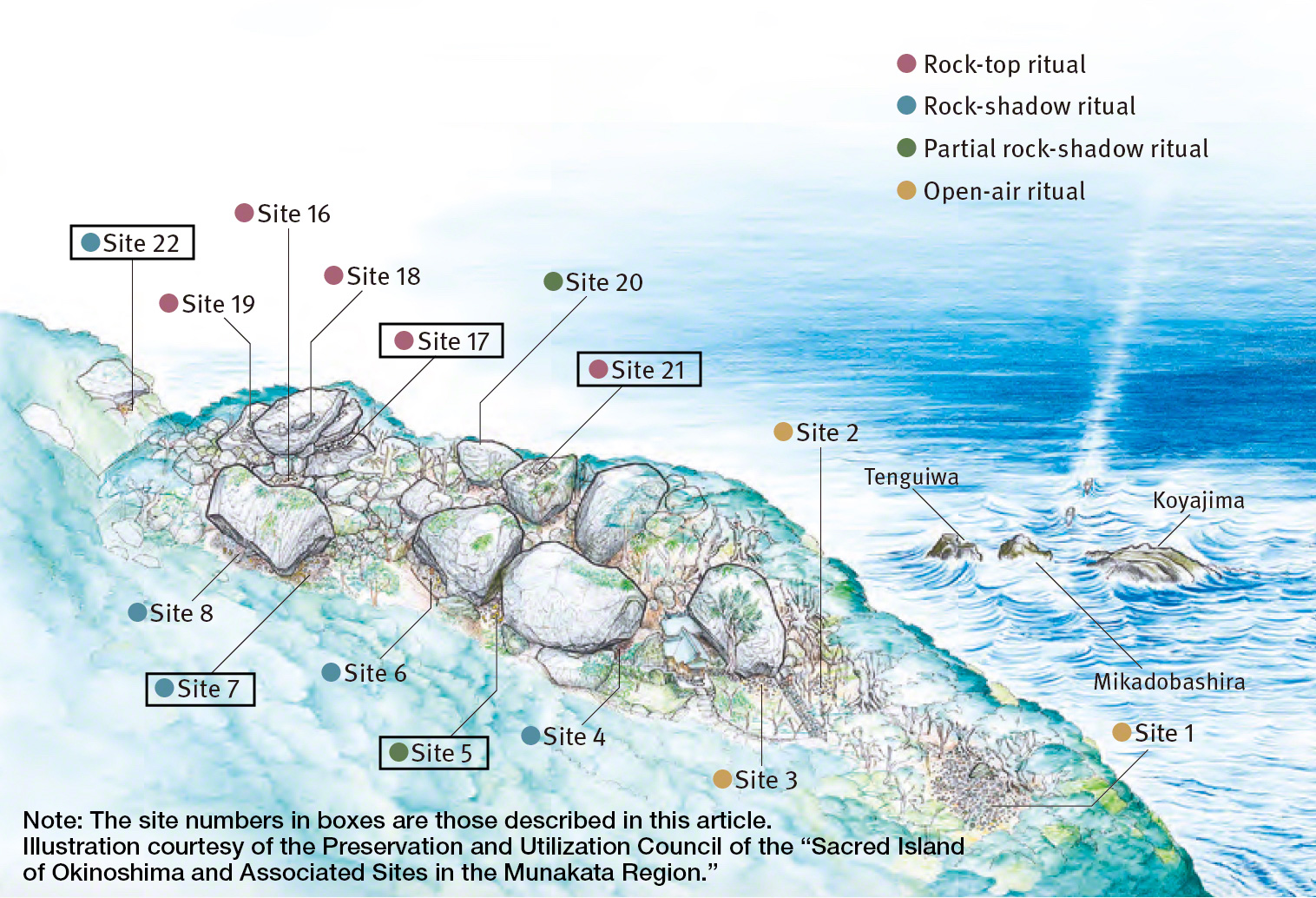 The oldest ritual sites, surrounding a boulder 10 meters high, date from the latter half of the fourth century. At Site 17, archaeologists discovered several objects wedged into a crevice in the rock. These included a bronze mirror 27 centimeters in diameter, jade curved beads, bracelets made of jasper, and iron swords. The precious objects discovered there were similar to the burial furnishings found in the large burial mounds of the Early Kofun Period (latter half of the third century to the fourth century) on the Japanese mainland, demonstrating the importance to the Yamato court of the Okinoshima religious rituals amid rising tensions on the Korean peninsula. 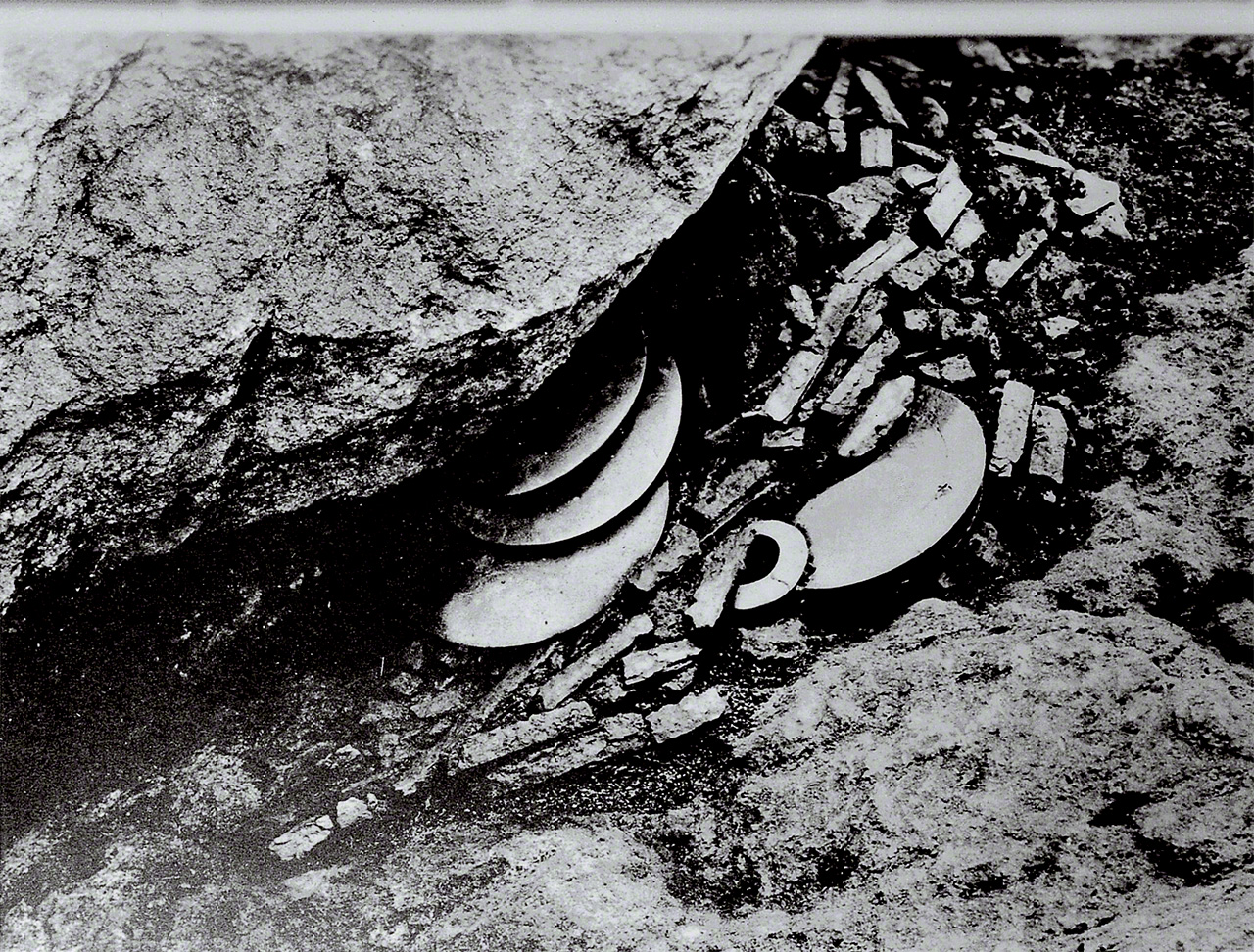 Artifacts unearthed at Site 17. Twenty-one mirrors facing upward and stacked atop one another were placed in a rock crevice. (Courtesy of Munakata Taisha) 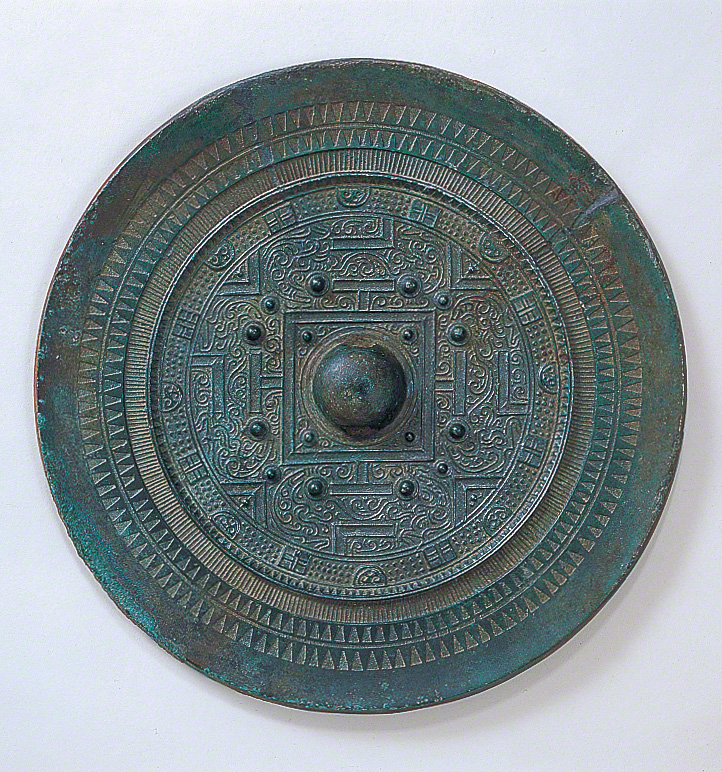 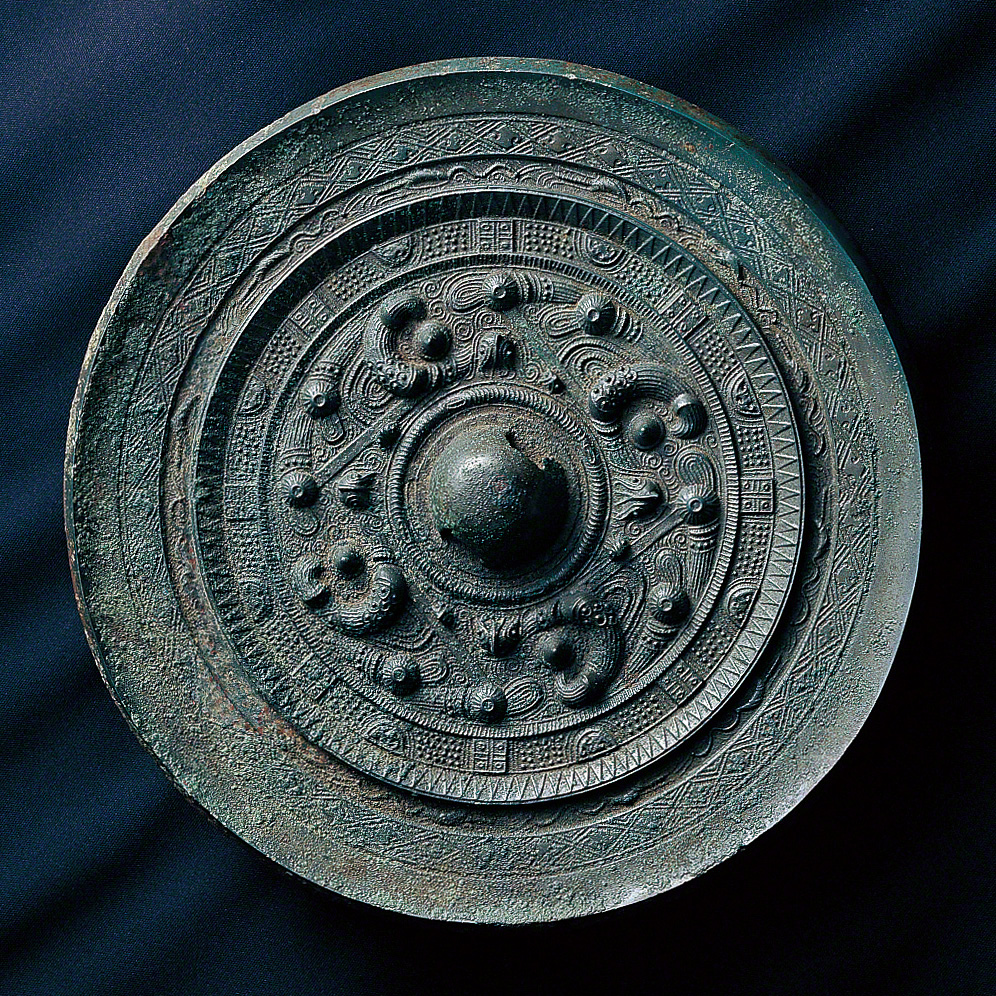 Site 21, on top of another boulder, dates from the fifth century. It consists of rocks laid out to form a square, inside which offerings were placed atop the rock. Extensive contacts with the Korean peninsula in the fifth century brought new technologies to Japan, two of the most notable being smithery and weaving. The items found at this site included mainly iron swords, spears, arrowheads, and helmets. There were also tools such as planes, small knives, and hatchets, and what appear to be iron plates. These ironware goods, along with textiles, were the most precious offerings that could be made to the kami. In fact, the textiles found at Okinoshima are believed to be the origins of offerings of cloth and other woven articles made to Japan’s innumerable kami. 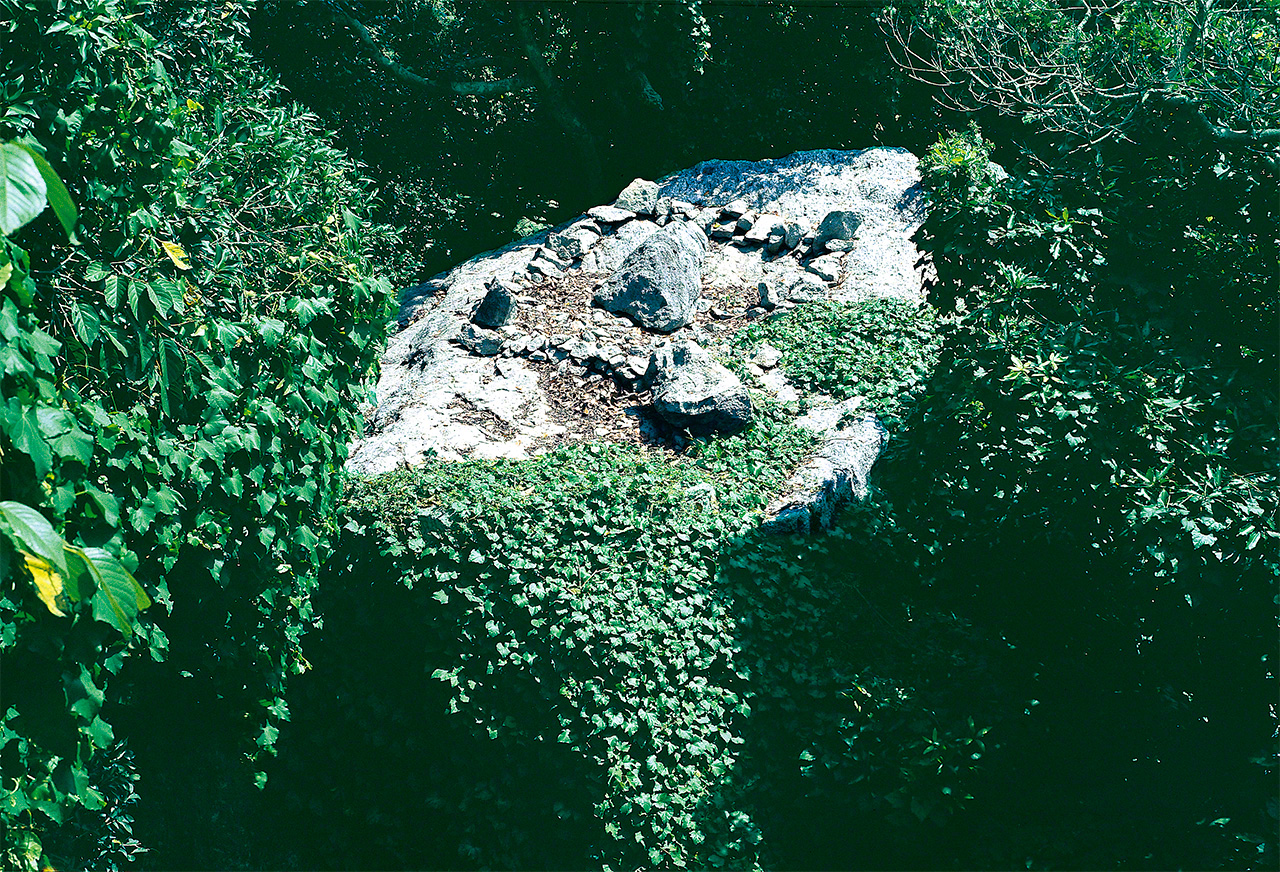 Site 21. Several offerings surrounded by smaller rocks were placed atop the large rock at the center. (Courtesy of Munakata Taisha)

Shifting Nature of the Rituals

In the sixth century, many offerings were left in the shadows of boulders. Site 7 is a typical example, with numerous precious articles left carefully lined up on flat ground in the shadow of the island’s massive rocks. Finds at the site include horse-riding gear decorated in gilt bronze, sword hilts encrusted with rock crystals, quivers with brocade and braided cord ornamentation, shield decorations, halberds, and horsemen’s armor. Offerings from this period bear some similarities to the jeweled sword and other sacred treasures of Ise Jingū, one of Shintō’s most important shrines. 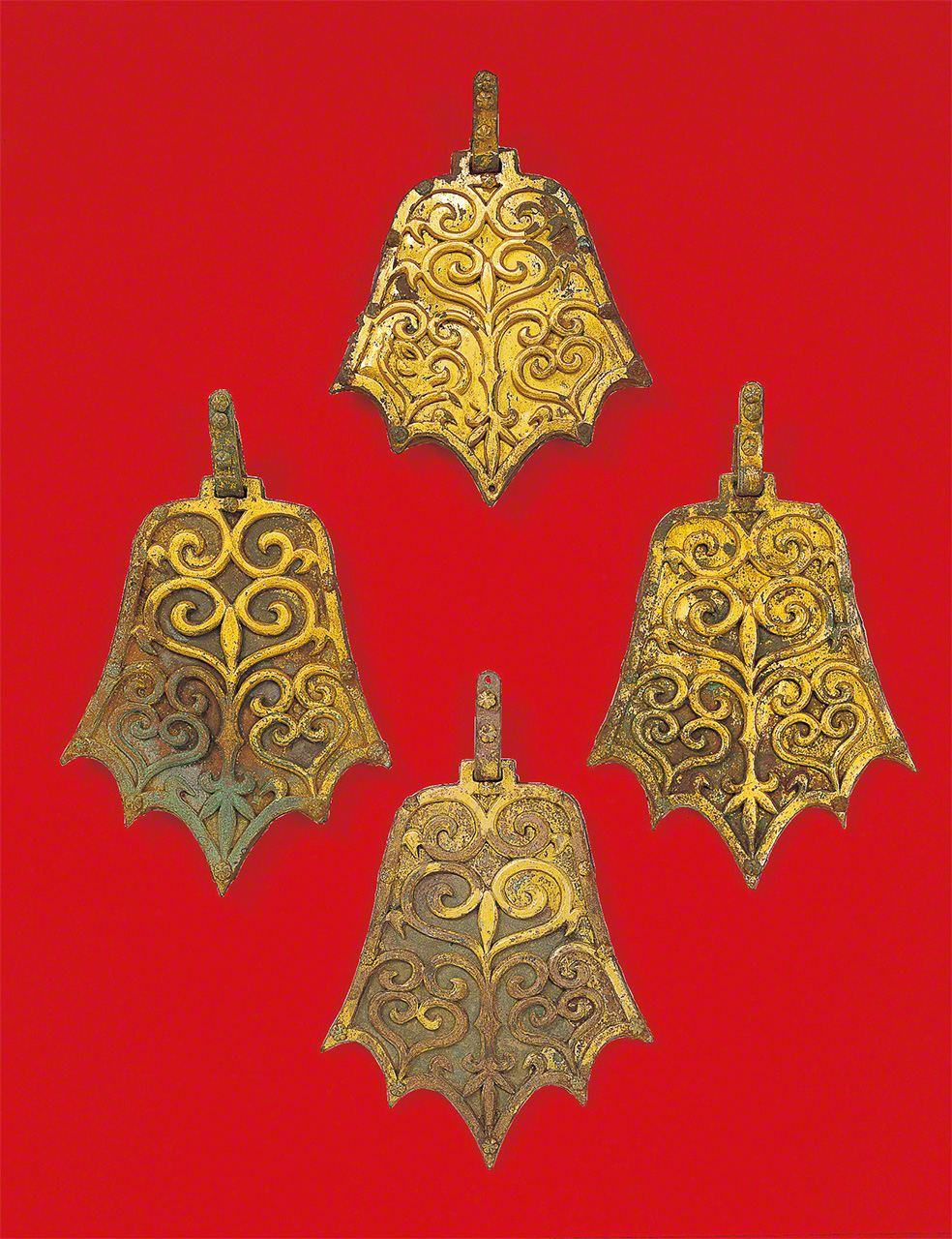 From the fourth century onward, offerings to kami on Okinoshima were left atop or in the shadow of rocks. At Site 22, a rock-shadow site dating from the seventh century, and partial rock-shadow Site 5, which was used from the latter half of the seventh century to the eighth century, researchers found gilt bronze miniatures which included weaving implements and a harp, objects resembling the sacred treasures at Ise Jingū’s Naikū sanctuary, the shrine dedicated to imperial ancestors. 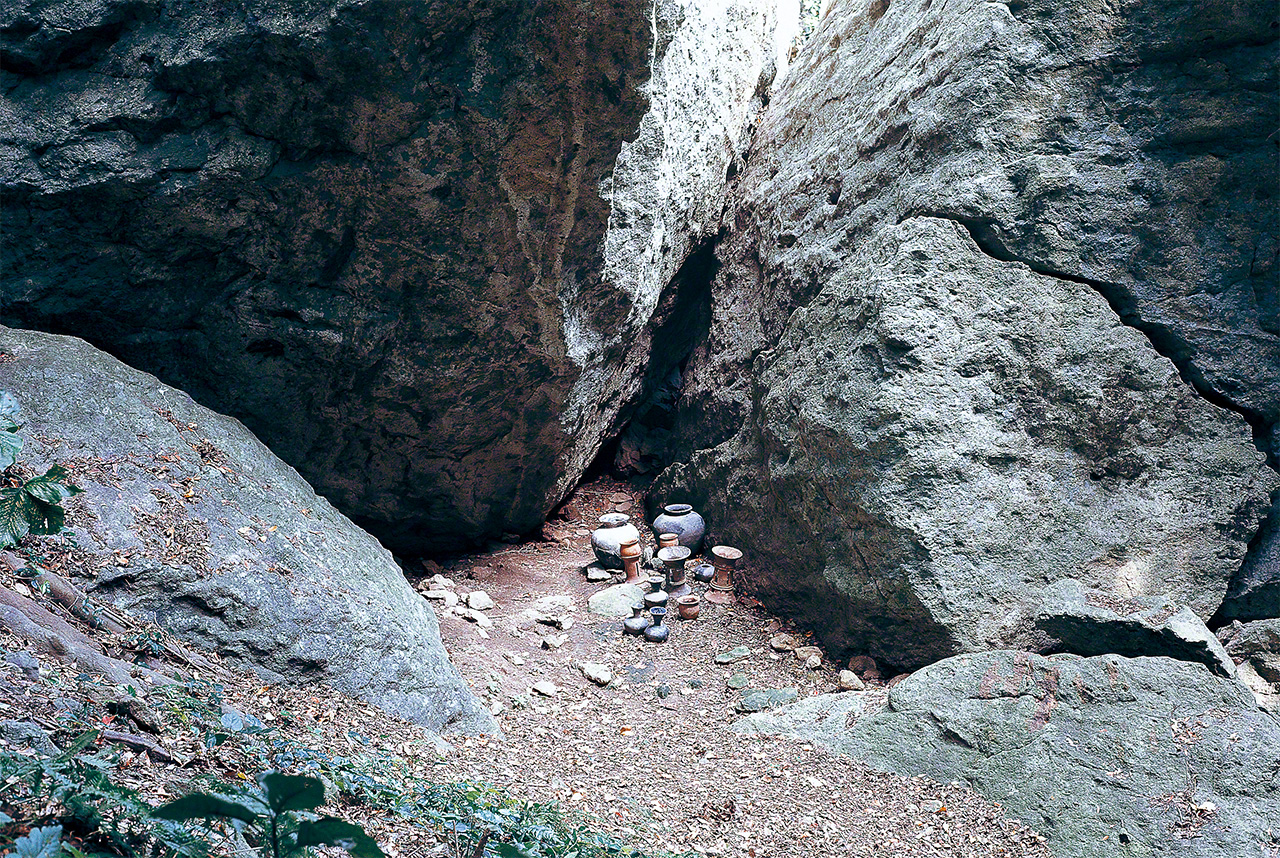 Excavation at Site 5. The crevice at the rear contained miniatures of a five-stringed harp, bobbins for spinning thread, and other objects. In the foreground are earthenware vessels used for offering rituals. (Courtesy of Munakata Taisha) 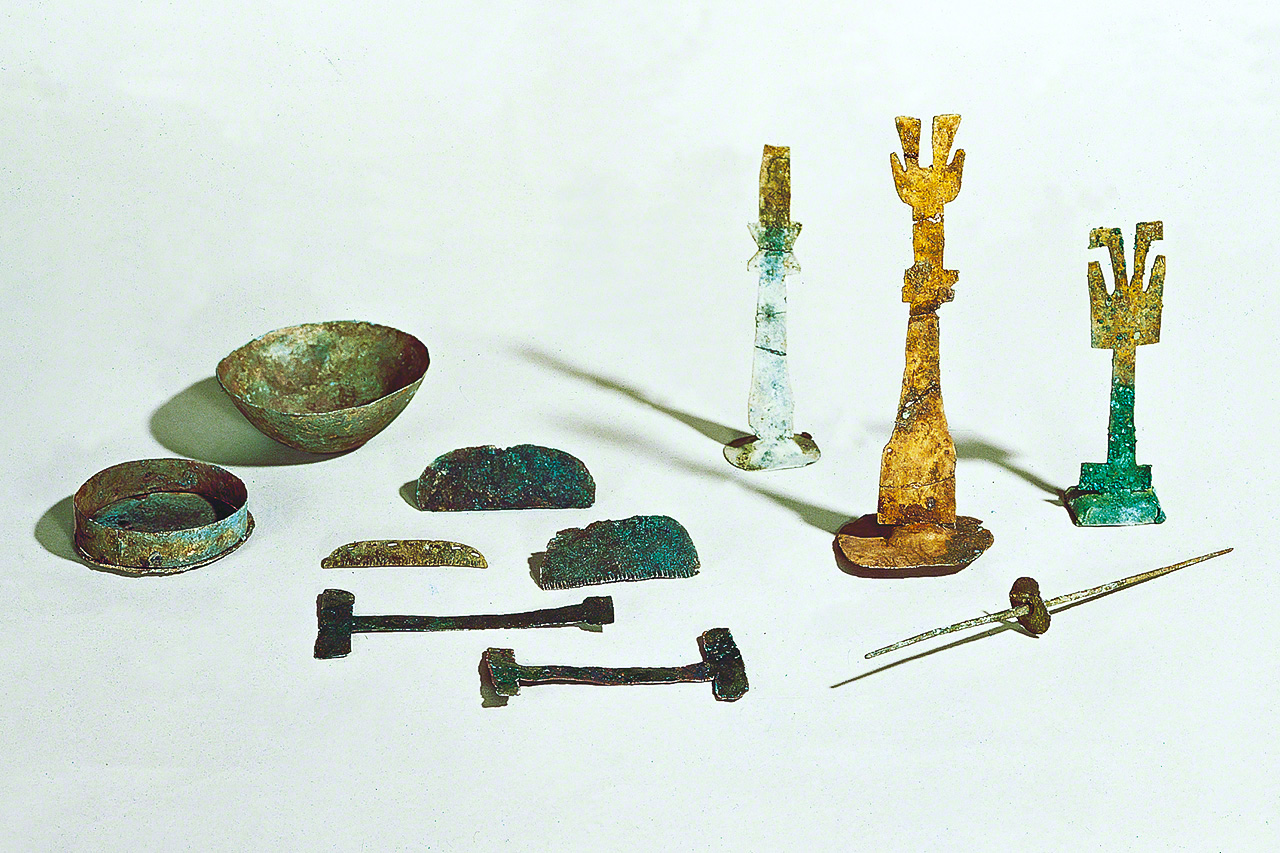 Gilt bronze miniatures of weaving implements and other objects from Sites 1, 5, and 22. (Courtesy of Munakata Taisha) 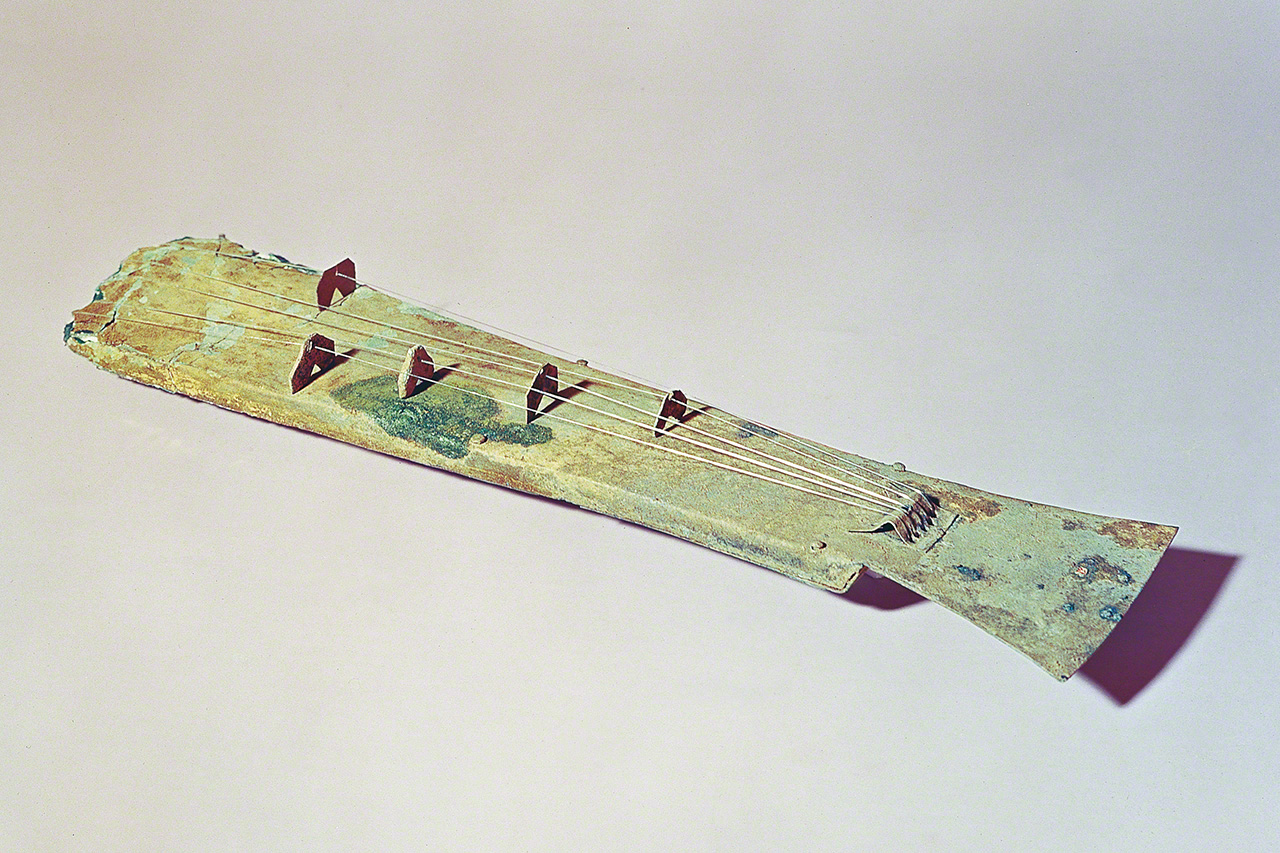 A gilt bronze miniature of a five-stringed harp, excavated from Site 5. (Courtesy of Munakata Taisha)

Site 5 also contained many earthenware vessels used as dishes for presenting offerings to kami. Some were used for salt-making, showing that salt had been brought to the ritual site, again similar to rituals at Ise Jingū. It is quite likely that rituals at the Munakata shrines, starting from the latter half of the seventh century, began increasingly resembling the practices at Ise Jingū. Okinoshima itself played an important role in Japan’s ancient history and as a vital waystation for travel to and from the Korean peninsula. Such travel would have been impossible without the seafaring skills of the Munakata clan, who were probably also responsible for carrying out the rituals at the three shrines. 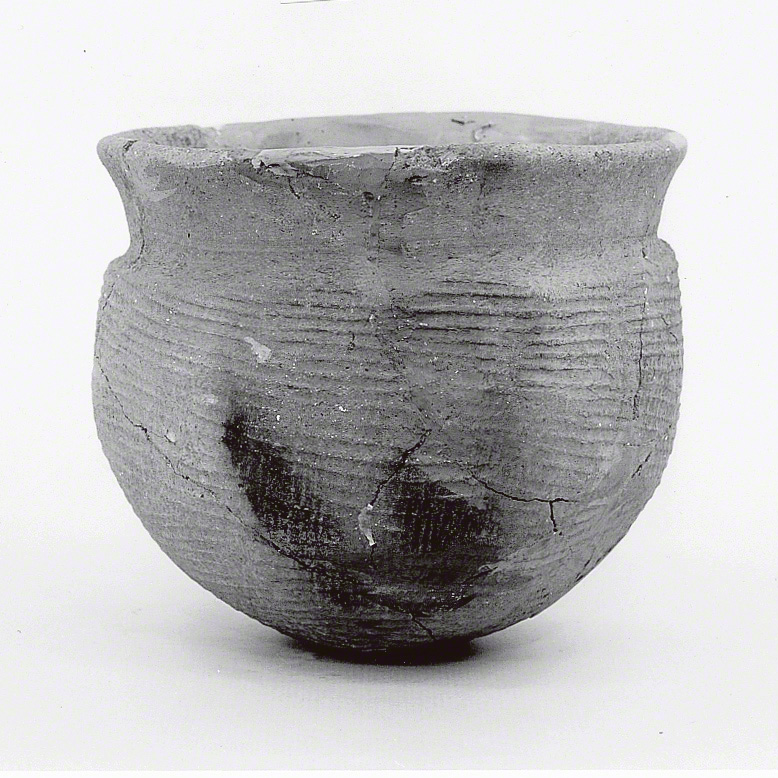 An earthenware vessel found at Site 5. (Courtesy of Munakata Taisha)

The latter half of the seventh century was a period of great change for the country. The ritsuryō system of centralized government was adopted from China and Wakoku became known as Nihon. It was also around this time that compilation of Kojiki and Nihon shoki began and that the rituals carried out at the Munakata shrines became increasingly aligned with those at the Naikū of Ise Jingū. The close relationship between the imperial ancestors and the three female kami of Munakata described in Kojiki and Nihon shoki seems to support this as well. In that era of change, the rituals at Okinoshima became codified under the ritsuryō system, and the words “assist the emperors and the emperors will worship you in return” noted in Nihon shoki made clear heaven’s command to Munakata Taisha.

Lessons for Our Century

The remains of the nature-based rituals of the Munakata shrines share many similarities with those of those found in other parts of the country and the rituals carried out at Shintō shrines. Japan is blessed with the bounty of nature on the one hand, but also suffers frequent natural disasters. The tradition of sacred rituals expressing both gratitude and awe toward nature reminds us to be humble and judicious in our relationship with nature.

Urban residents, whose daily lives are far removed from nature, can be affected by torrential rains or earthquakes too, and there is much to be learned from the ancient rituals of Okinoshima and Munakata.