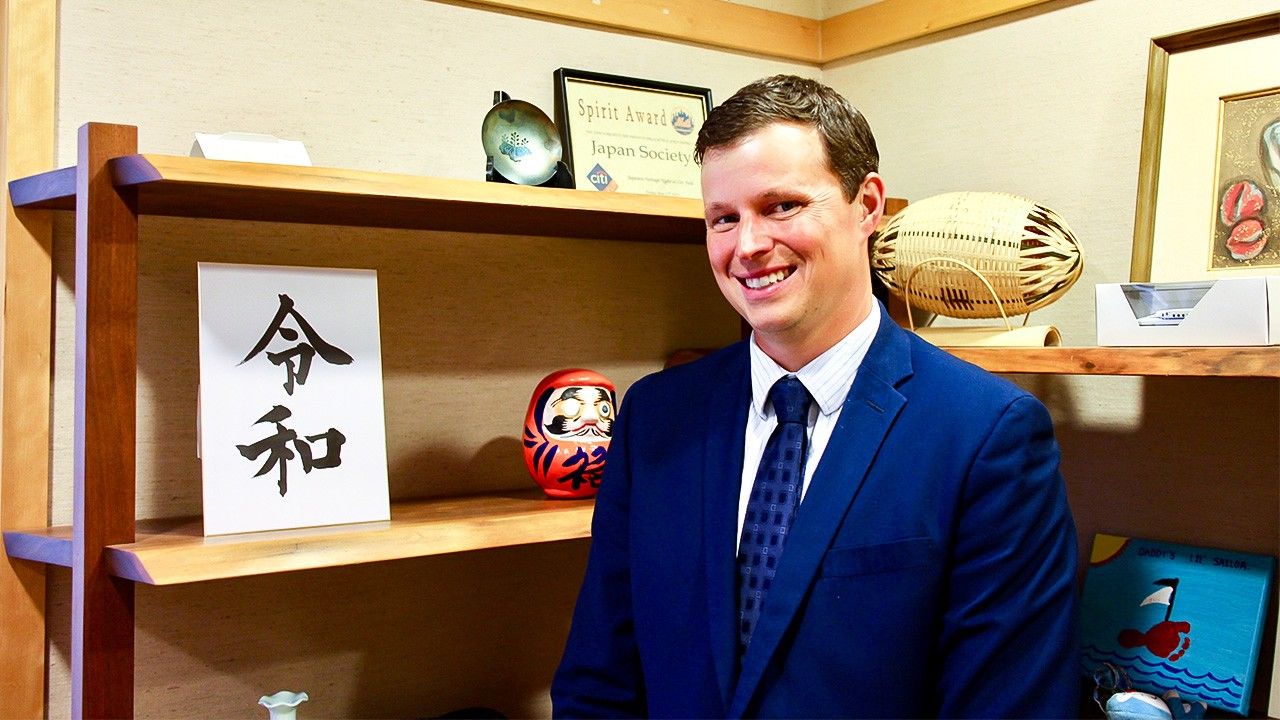 World Global Exchange Nov 14, 2022
American-born but raised in Hokkaidō, Joshua W. Walker, who heads the Japan Society (New York), the largest organization for Japan-US relations in the United States, has an unusual background. Nippon.com talked to him about cultural exchange, Japan’s global presence, and what message Japan should be sharing with the rest of the world. 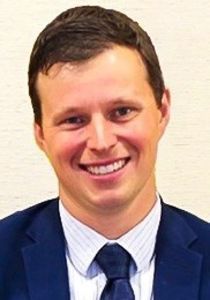 President and CEO of the Japan Society. Born in North Carolina, Dr. Walker grew up in Sapporo. Returning to the United States at the age of 18 to attend college, he went on to receive a bachelor’s degree from the University of Richmond, a master’s degree from Yale, and a doctorate in political science from Princeton. Dr. Walker has built a career in international business and diplomacy during the past 20 years. His previous position was with the Eurasia Group, a consulting firm specializing in geopolitical risk analysis, where he was responsible for global strategy and the Japan Initiative team. Dr. Walker was appointed president and CEO of the Japan Society in December 2019.

The Japan Society, located at 333 East 47th Street in midtown Manhattan, is just a stone’s throw from the United Nations headquarters. Well known to Japanese expatriates, Japanese Americans, and Americans with an interest in Japan, the Japan Society is a private, nonprofit organization that has promoted exchange between Japan and the United States for over 115 years. The building’s heavy glass doors open onto a reception area, at the rear of which there is a staircase that looks down on a compact Japanese garden. An urban oasis popular with locals, the six-floor building houses a theater and an art gallery, and hosts cultural events, economic and policy programs, and educational initiatives, including language courses, aimed at fostering understanding between Japan and the United States.

Today, the Japan Society is led by Joshua W. Walker, its president and CEO. Now 41, Walker was the youngest person ever to have been appointed at the time he took up the position in December 2019. Born in the United States, Walker moved to Japan with his missionary parents at the age of one and lived in Sapporo, Hokkaidō, until the age of 18. 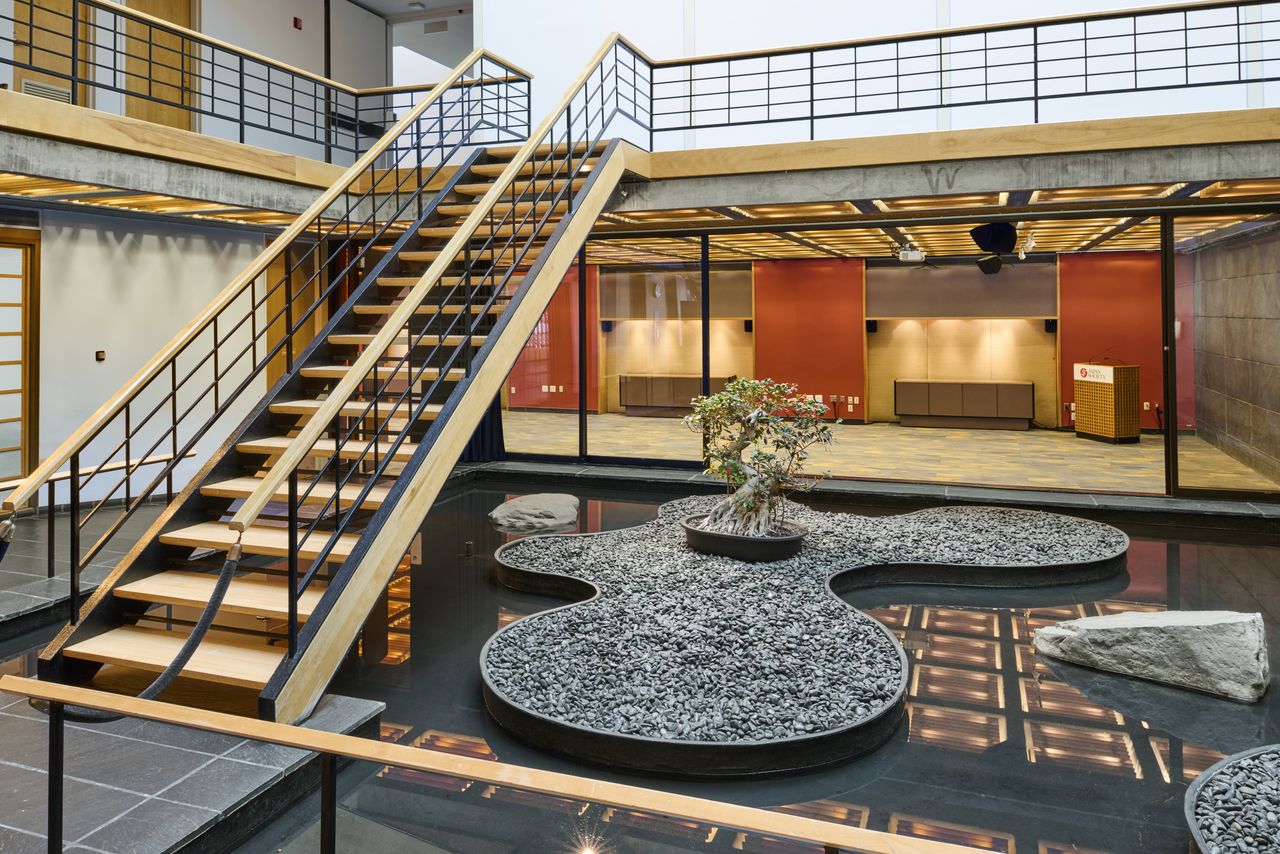 The Japanese garden at the rear of the first-floor lobby. (© Sugimoto Gō)

These days diversity has become a buzzword, and Japan is home to many international residents, including many talented athletes. However, in the 1980s, when Walker was growing up, it was less common to see people with overseas roots.

“In Sapporo, unlike Tokyo, non-Japanese were few and far between. Wherever I went, I was seen as a foreigner, and no one around me doubted my Americanness. This was because, as you can see, I have the hair and eyes of a typical American and speak like a typical American.”

Walker says he was never allowed to forget the fact that he was unmistakably non-Japanese.

“I felt that I did not fit in and that I was incompatible with Japan. Although I now realize that I was very fortunate, I didn’t see it that way at the time. Seeking excitement and challenge, I felt the need to go somewhere that was not Japan,” he says.

Walker relocated to Richmond, Virginia, to attend college. However, although he returned to the country of his birth thinking he would feel American there, he says that this was not the case.

“I tried to get exposure to Americans and American culture and to fit into the American way of doing things, but something didn’t feel right. I didn’t agree with the views of those around me or what was being said on TV. I felt that I was not one hundred percent American after all.”

And so Walker embarked on a journey of self-discovery. He applied for a Fulbright scholarship and was sent to Turkey.

“Turkey is a nation that Japanese people have an affinity for. There’s a culture of taking your shoes off indoors, drinking tea, and respecting your elders. Turkish culture is different from the Western ‘me! me! me!’ culture, which emphasizes equality in relationships, irrespective of age. In Turkey, I found that I was able to communicate best by thinking in Japanese, speaking Turkish, and showing my Japanese side,” he says.

This experience would later inspire Walker to develop an interest in international events and politics, and in the world of Islam, an interest that blossomed after the September 11, 2001, attacks. Torn between Japan and America, Walker made an unexpected discovery in the course of searching for his identity:

“Because I am culturally half Japanese and half American, I’m neither American nor Japanese, but rather a global citizen,” he says.

Walker, who regards Japan as his “heartland” and the United States as his “homeland,” soon began to miss, and feel gratitude toward, Japan. One might say that this is much the same way that Japanese nationals only realize what a great place Japan is when they go overseas, or how people do not realize how lucky they are to be healthy or happily married until they fall ill or lose their companion. It is difficult to view a situation objectively when one is in the thick of it.

The Great East Japan Earthquake and tsunami of March 11, 2011, significantly changed the Japanese public’s belief that they could take safety and security for granted.

“It was the first event that made me truly grateful to Japan,” says Walker.

Immediately after the earthquake, Walker was unable to reach his parents by telephone—they lived in Tōhoku at the time. He was very worried, not knowing whether they were all right. At the same time, he sensed that seeing the Japanese public’s response to the disaster had changed the way the rest of the world viewed Japan.

“The experience of seeing the Japanese spirit of helping your neighbor at work, as well as the cooperative culture that enables people to form orderly lines even during chaos, caused people—even those who had heard about what Japan did during the war—to learn about Japan’s other great qualities beyond cuisine and traditional culture,” says Walker.

Reserve and modesty are virtues in Japan, and Japanese people are not good at sharing stories of their experiences or heroism with the rest of the world. Because of this, Walker began to understand that he had to put to good use his ability to speak Japanese and to convey to the rest of the world what a great place Japan was.

When the Japan Society began the search to replace its outgoing president, the organization’s Board approached Walker, asking him if he knew of anyone suitable. At the time, he was working for the Eurasia Group, the world’s largest political risk consultancy, in Washington DC, where he was responsible for global strategy and the Group’s Japan initiative team. The Society decided that Walker, who had been raised in Japan and was working in the United States to advance Japanese interests, was just the person they needed, and hired him to be the next president and CEO.

Japan on the World Stage

“While the governments of Japan and the United States enjoy a sound relationship, the same cannot be said at the citizen level,” says Walker.

The Japanese public knows that the Japan-US alliance is beneficial for Japan in terms of security, but they do not have a good understanding of how it benefits them specifically in their day-to-day lives. The same can be said of US citizens’ understanding of what Japan means.

“I wanted to use my experience to make people in both countries realize and appreciate that Japan and the United States are two countries that enjoy an invaluable partnership. I am trying to foster mutual understanding, not simply from a Japanese or US perspective, but from the perspective of a global citizen,” says Walker.

While Japanese are familiar with the United States through movies, Americans know relatively little about Japan. For this reason, Walker wants Americans to learn more about what a great place Japan is.

“New Yorkers like their Uniqlo clothing, Toyota cars, Nintendo video games, Seiko watches, and Itō En tea. Zen philosophy, bushidō, and anime are also popular. It’s time now to take this to the next level. The Japanese are good at selling things, but they have to do more to promote Japan to Americans—not out of a desire to make money, but from a position that doing so is good for America,” he notes. 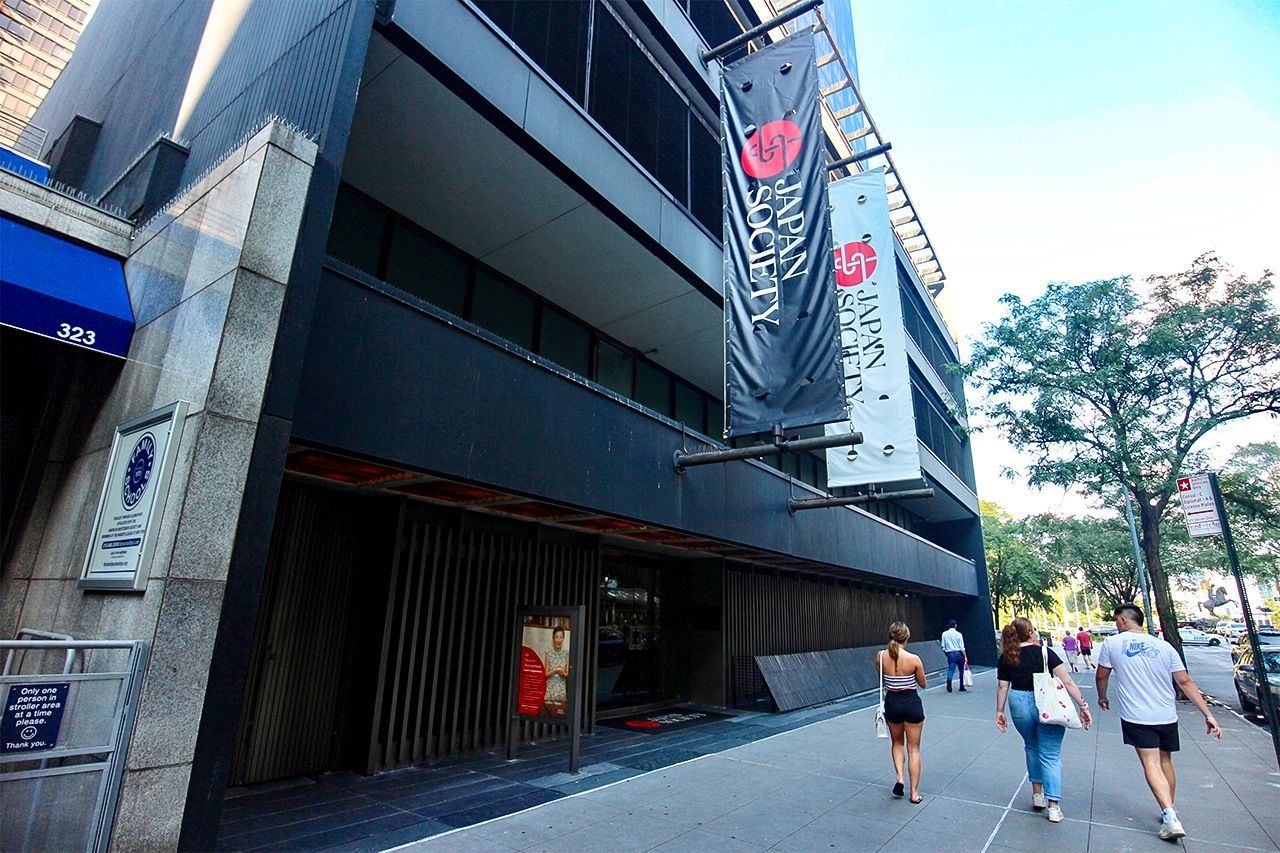 Taking Japan to the World

“Japan is a very stable country. Put differently, Japan is a comfortable and somewhat boring country. I used to find Japanese politics boring too, but these days I am grateful for political stability. This is because political boredom is the same thing as safety and peace of mind,” says Walker.

During the COVID-19 pandemic, Walker was unable to visit Japan on business. When asked what he missed the most, he immediately answers “the food,” then adds that he missed the people even more.

“Generally speaking, Japanese people are considerate and respectful, and value harmony. Japan has a wonderful culture of hospitality. Americans only offer what they like themselves. If the customer likes what is on offer, that’s great—if they don’t, then too bad. One country is individualistic and forward-looking while the other is collectivist and traditional. These huge differences mean that when you make the two countries face each other, like two mirrors, you can create synergies. It’s a ‘one plus one equals three’ situation,” he says.

“As part of our mission to share with the world the amazing value that Japan has to offer,” says Walker, “we provide opportunities on a daily basis to experience and learn about arts and culture. Japan and the United States share a tragic history—our ancestors fought each other—but hard work has given rise to the amicable relationship we see today. This relationship should not be taken for granted. Rather, we must continue to make efforts to maintain it.”

In 2020, when the world was gripped by the pandemic, Japan Society disseminated information in the United States on how Japan had handled past calamities like the 2011 earthquake and tsunami. Walker says that there are many other such stories that Japan can showcase to the world.

“New York is a global city—people come here from all over the world—so when you share a message here, you’re sharing it with the entire world. I want the Japan Society to be a channel through which Americans can come to feel a connection to Japan,” he declares.