Society Apr 1, 2020
The continued spread of COVID-19 in March 2020 led to the postponement of the Tokyo Olympics and Paralympics.

The Japan Sumō Association announces that due to the COVID-19 outbreak, the spring Grand Sumō Tournament in Osaka due to start on March 8 will be held behind closed doors. It is the first time there have been no spectators at a major sumō tournament since 1945.

An evacuation order for a part of Futaba, Fukushima Prefecture, is lifted at midnight. It is the first such move in the town since the evacuation order was imposed following the 2011 nuclear accident at Fukushima Daiichi Nuclear Power Station.

Prime Minister Abe Shinzō announces entry restrictions will be imposed on travelers coming from China and South Korea, including Japanese citizens, asking them to stay inside for 14 days after arrival. The measures come into effect on March 9.

The planned beginning of the Nippon Professional Baseball season is postponed from March 20, the originally scheduled opener date.

Japan marks nine years since the Great East Japan Earthquake, but the government-led ceremony at the National Theater in Tokyo is cancelled due to the coronavirus outbreak.

The Japan High School Baseball Federation calls off its national spring invitational tournament, due to start on March 19.

After spring labor-management talks, Toyota skips a pay-scale hike for the first time in seven years.

The Sendai High Court orders Tokyo Electric Power Co. to pay \734 million in damages to 216 people forced to evacuate after the accident at Fukushima Daiichi Nuclear Power Station. It is the first ruling from around 30 such class-action lawsuits across the country.

Prime Minister Abe is given the power to declare a state of emergency during the fight against the spread of COVID-19. Through it he could give prefectural governors powers to place restrictions on the rights of private citizens. 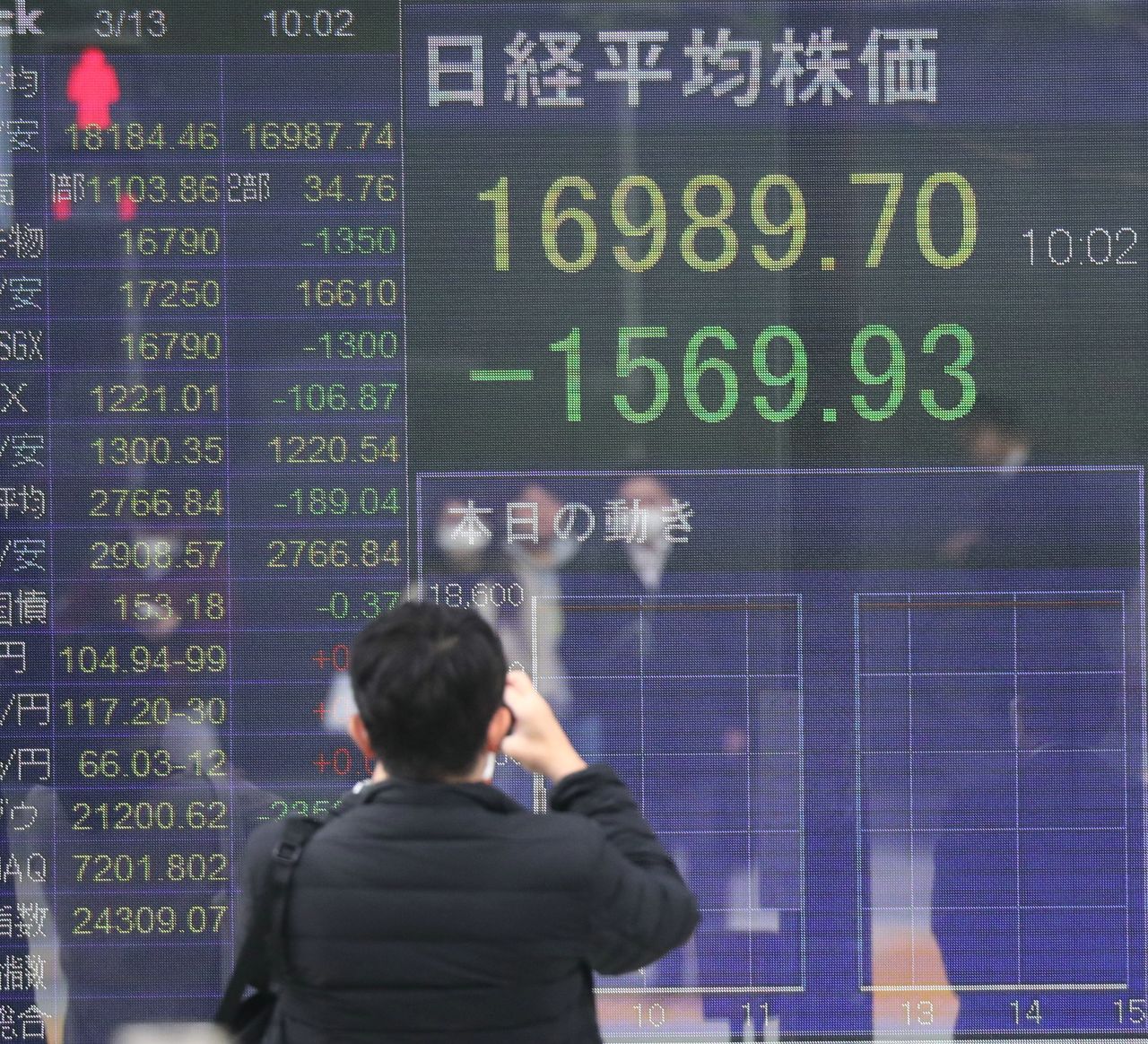 President Iwane Shigeki, consultant Mori Shōsuke, and two others resign from Kansai Electric Power Co. after a third-party investigation into a bribery scandal.

The Jōban Line returns to full service for the first time since the Great East Japan Earthquake.

The Yokohama District Court sentences Uematsu Satoshi to death for killing 19 people and wounding 26 others at his former workplace, a care home for mentally disabled people in Sagamihara, Kanagawa Prefecture.

The Bank of Japan decides to implement its first monetary easing measures for three and a half years, including doubling buying of exchange-traded funds and supporting cash flow.

The widow of Akagi Toshio, a finance official who died by suicide, files a lawsuit with the Osaka District Court seeking damages from the government and Sagawa Nobuhisa, the former director-general of the Finance Bureau. She says her husband’s suicide was caused by an order to tamper with documents related to the sale of a state-owned plot of land to Moritomo Gakuen.

Chiba District Court sentences Kurihira Yūichirō to 16 years in prison for physical abuse that led to the death of his 10-year-old daughter Mia in January 2019. 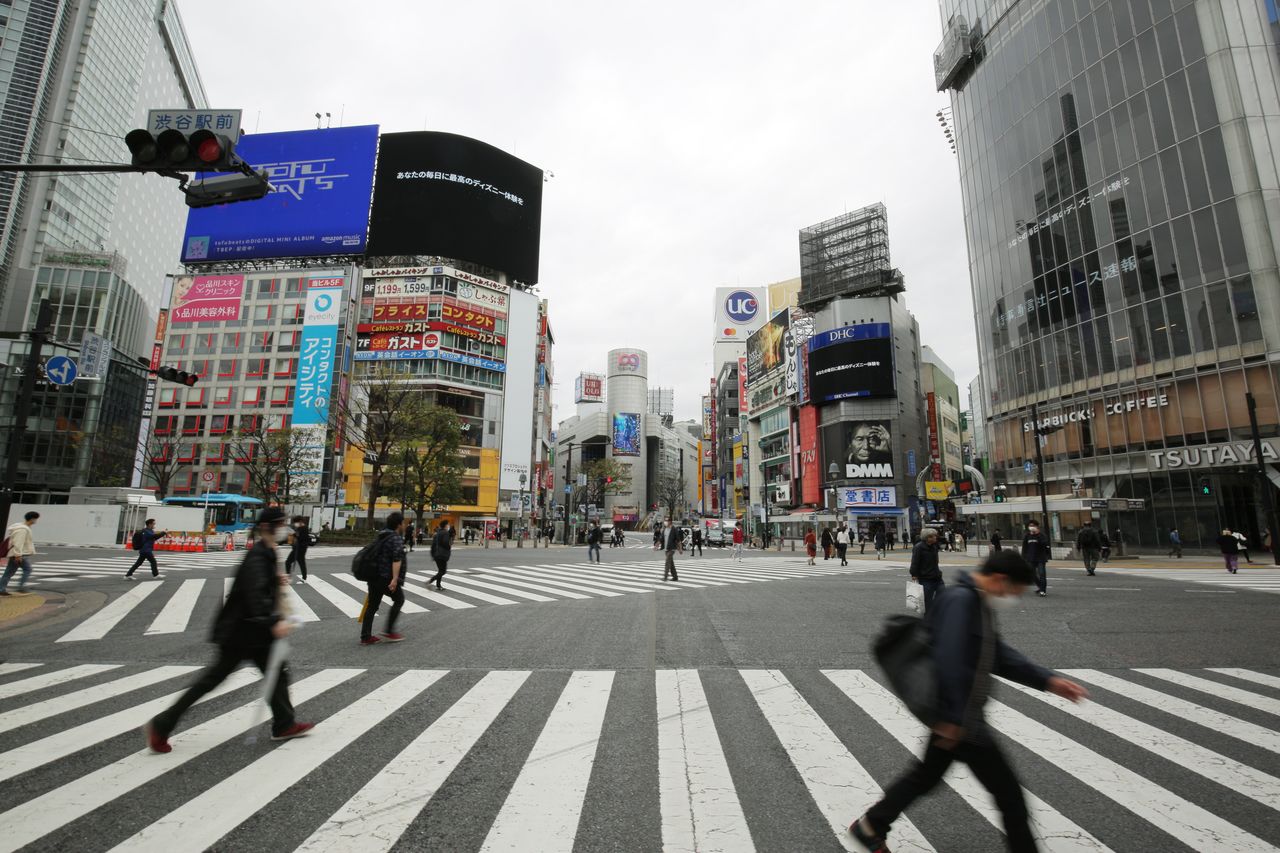 The Tokyo Olympics and Paralympics are postponed until 2021 in an unprecedented move. 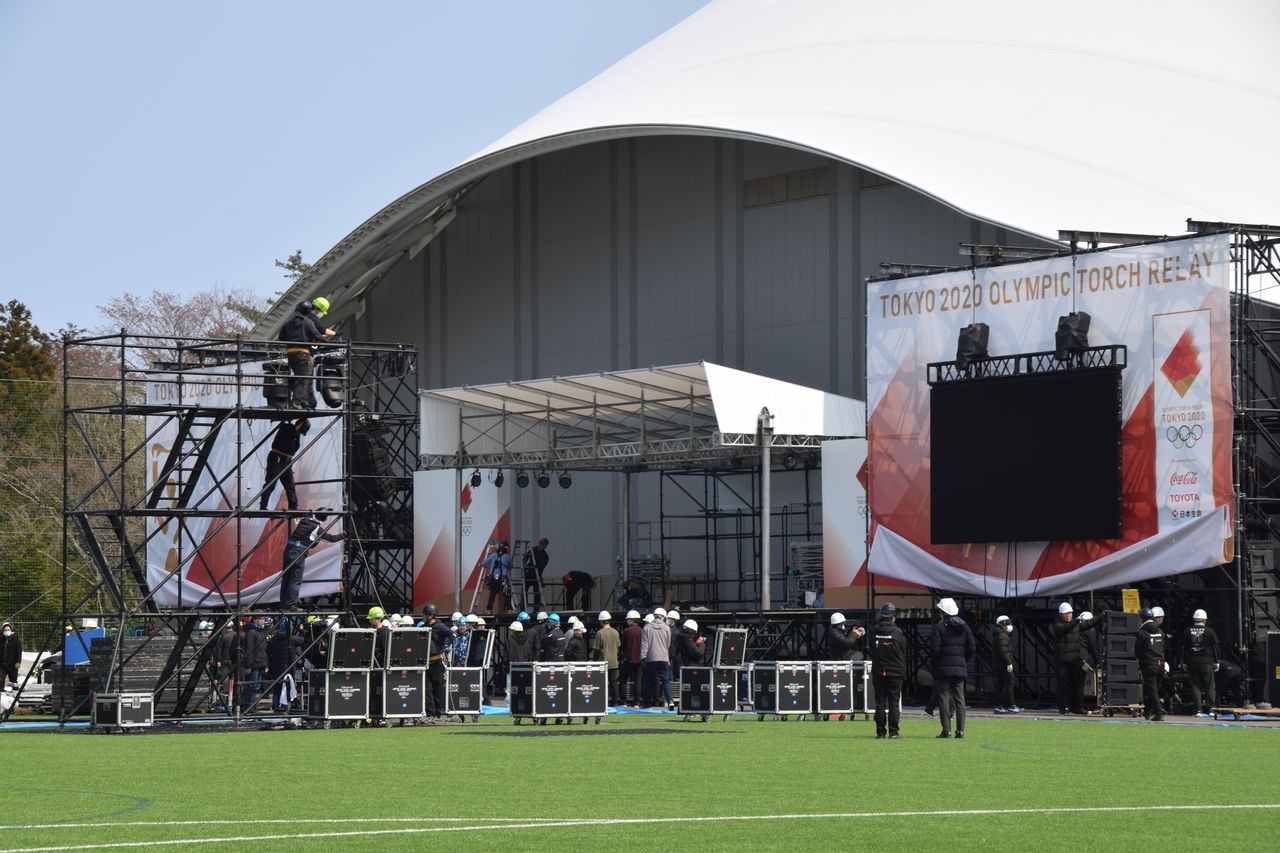 Following the postponement of the Olympic torch relay, the stage is taken down at the planned starting point of J-Village in Naraha, Fukushima Prefecture, on March 26, 2020. (© Jiji)

Toyota and NTT form a capital and business alliance to work together on developing a smart city.

Comedian Shimura Ken of the Drifters dies at the age of 70, nine days after being hospitalized with COVID-19.

Nishiyama Mika, a 40-year-old nurse who had served 12 years in prison after being convicted of the murder of an elderly patient who died at Shiga Prefecture's Kotō Memorial Hospital in 2003, is found innocent in a retrial at the Ōtsu District Court. The ruling states that Nishiyama's admission that she had removed the patient's ventiilator could have been drawn out by leading questions from interrogators.

(Originally published in Japanese. Banner photo: Sumō wrestlers enter the ring on the last day of the spring tournament at Edion Arena Osaka on March 22, 2020. © Jiji.)