Society Oct 2, 2020
Suga Yoshihide becoming prime minister was among the top stories in Japan in September 2020.

The Japan Meteorological Agency releases a report for June to August 2020, finding that the average temperature in eastern Japan in August was 2.1º Celsius higher than an average year, or the highest since records began in 1946. The average for western Japan in August was 1.7º higher than an average year, matching 2010’s all-time high.

The Osaka municipal assembly approves a plan to dissolve the city government, replacing it with four special wards. This effectively paves the way to a second referendum on the plan to turn Osaka Prefecture into a metropolis like Tokyo.

Typhoon Haishen moves north off the western coast of Kyūshū, causing high winds and waves, landslides and flooding from heavy rains, and swollen rivers in the island’s prefectures and Yamaguchi Prefecture on Honshū. There is one fatality each in the prefectures of Kagoshima, Miyazaki, and Saga. Three people also go missing following a landslide in Shiiba, Miyazaki Prefecture. 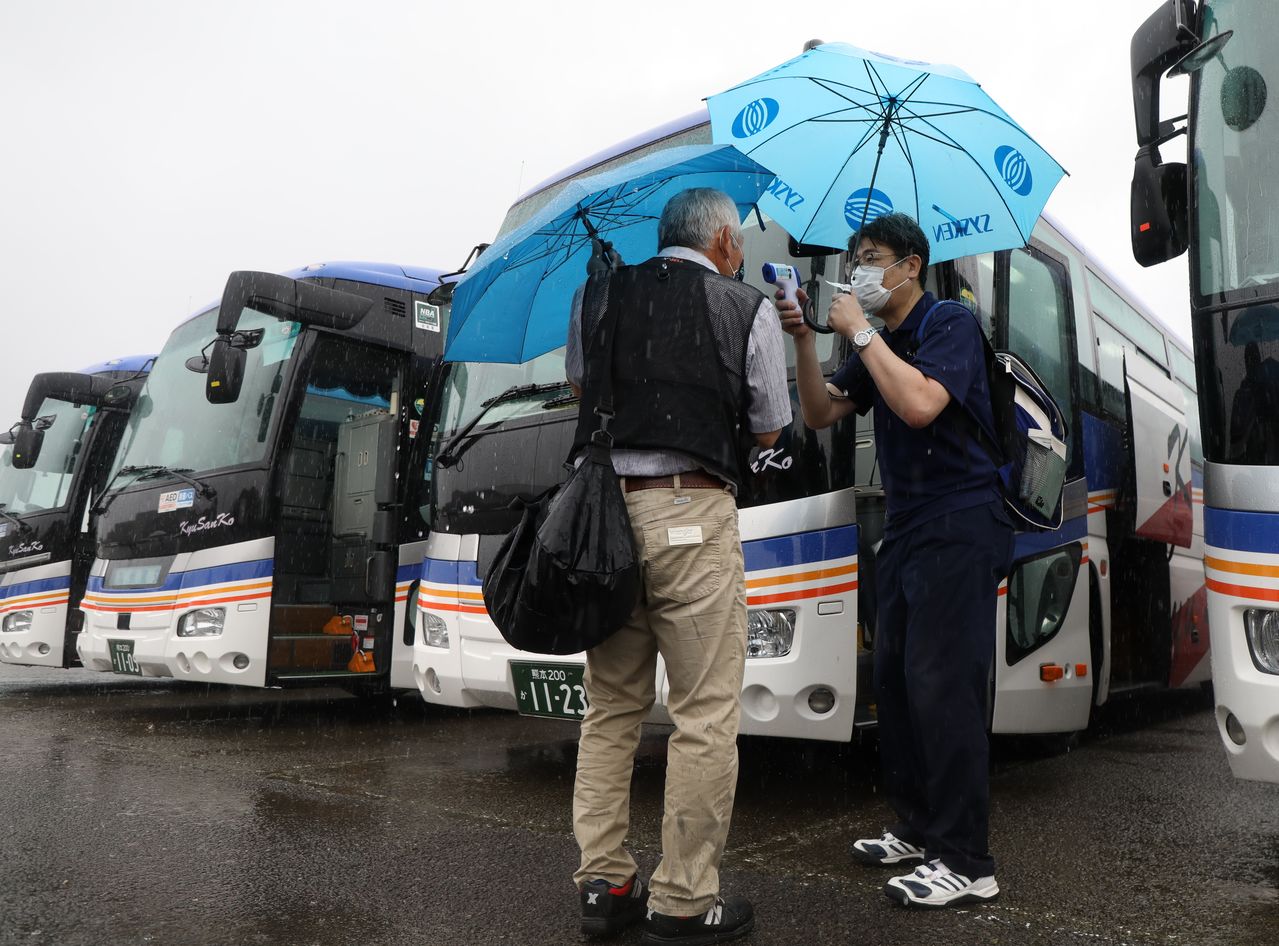 A resident of Hitoyoshi, Kumamoto Prefecture, has his temperature taken before getting on a bus to evacuate on September 6, 2020. (© Jiji)

Tokyo prosecutors serve a fourth arrest warrant on lawmaker Akimoto Tsukasa in a corruption case related to a casino resort bribery scandal. The warrant is for attempting to bribe a witness to commit perjury.

Liberal Democratic Party lawmaker Murakami Masakuni dies at the age of 88. He had served as chair of the General Assembly of Party Members of the House of Councillors and minister of labor.

NTT Docomo stops new registrations linking accounts at 35 banks to its e-money service Docomo Kōza after a series of hacking incidents siphons money from user accounts. It also announces it will compensate customers for the stolen money.

Ōsaka Naomi wins the US Open women’s singles competition for the second time, two years after her first success. She had initially withdrawn from the Cincinnati Masters the previous month as part of a strike by athletes protesting against the police shooting of African-American Jacob Blake in Kenosha, Wisconsin. In each of the seven rounds of the US Open, she wore a mask with the name of a different black victim of racism.

LDP leader Suga Yoshihide is named as prime minister of Japan. He announces his cabinet on the same day. 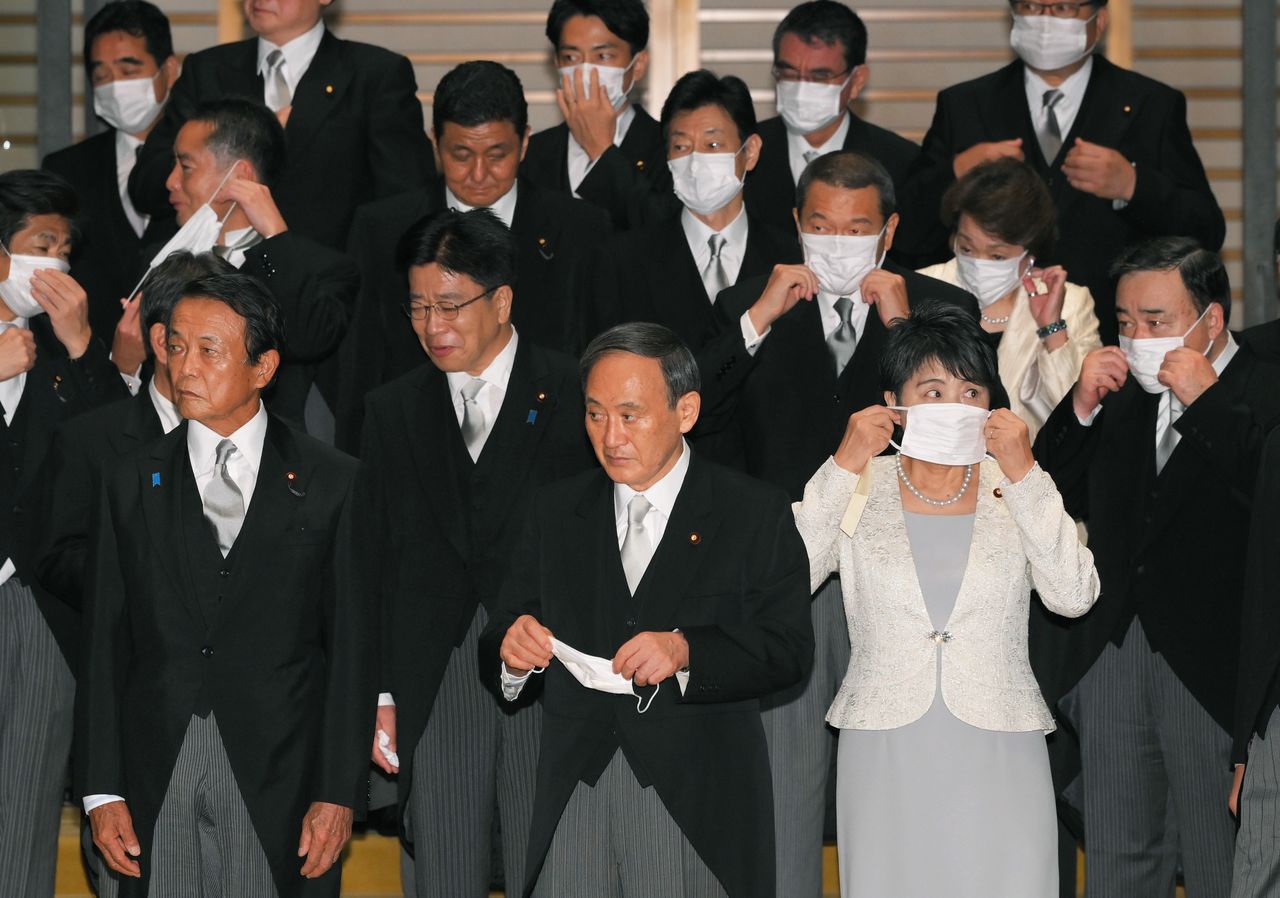 Police arrest Yamaguchi Takayoshi, the former chairman of Japan Life, and 13 other people on suspicion of fraud. The now bankrupt company sold magnetic medical products and other items to investors, promising them dividends from leasing, even though there was little prospect of such payouts emerging.

The Ministry of Internal Affairs and Communications announces that as of September 15, the number of seniors aged 65 or over in Japan had risen by 300,000 to 36.2 million. The cohort’s share of the total population climbed 0.3 percentage points to a new high of 28.7%.

The Ministry of Health, Labor, and Welfare announces that job losses caused by the COVID-19 pandemic rose above 60,000 on September 23 to 60,439.

Japan Post Bank announces that as of September 22, it had received around 380 complaints about fraudulent withdrawals through partner electronic payment services totaling ¥60 million.

Sumitomo Mitsui Trust Bank and Mizuho Trust & Banking announce problems with voting rights forms for general shareholders’ meetings not being counted at 1,346 companies, most of which are listed firms.

The government decides to expand its “Go To” campaign subsidizing travel and other consumption activities from October.

The International Olympic Committee and Tokyo organizing committee agree on 52 measures to simplify the summer games, postponed until next year.

Actress Takeuchi Yūko is found hanging at her home by her husband. She is later confirmed dead at a hospital.

The Ministry of Land, Infrastructure, Transport, and Tourism announces that due to reduced demand related to the COVID-19 pandemic, the average commercial land price dropped for the first time in five years in 2020. The average residential land price also fell by a greater margin than the previous year.

(Originally published in Japanese. Banner photo: Ōsaka Naomi wears a mask with the name “George Floyd” as she knocks a ball into the stands after her US Open women’s singles quarterfinal victory in New York on September 8, 2020. © USA Today/Reuters/Kyōdō.)