The governors of Tokyo, Kanagawa, Saitama, and Chiba Prefectures call for a new COVID-19 state of emergency in a meeting with Minister for Economic Revitalization Nishimura Yasutoshi.

The National Police Agency announces that there were 2,839 traffic fatalities in 2020, which is the lowest total since records were first kept in 1948. It is the fourth consecutive year of record lows, and the first time the figure has dropped below 3,000.

The government announces a COVID-19 state of emergency for Tokyo, Kanagawa, Saitama, and Chiba Prefectures to last from January 8 until February 7. The nationwide suspension of the Go To Travel campaign is also extended until February 7.

Fukui and Toyama Prefectures, along with other locations on the Japan Sea side of the country, experience record snowfall. At one point, around 1,000 vehicles are stranded on the Hokuriku Expressway and 200 on the Tōkai-Hokuriku Expressway. The snow also causes some fatalities, such as among people shoveling it off of roads or roofs. 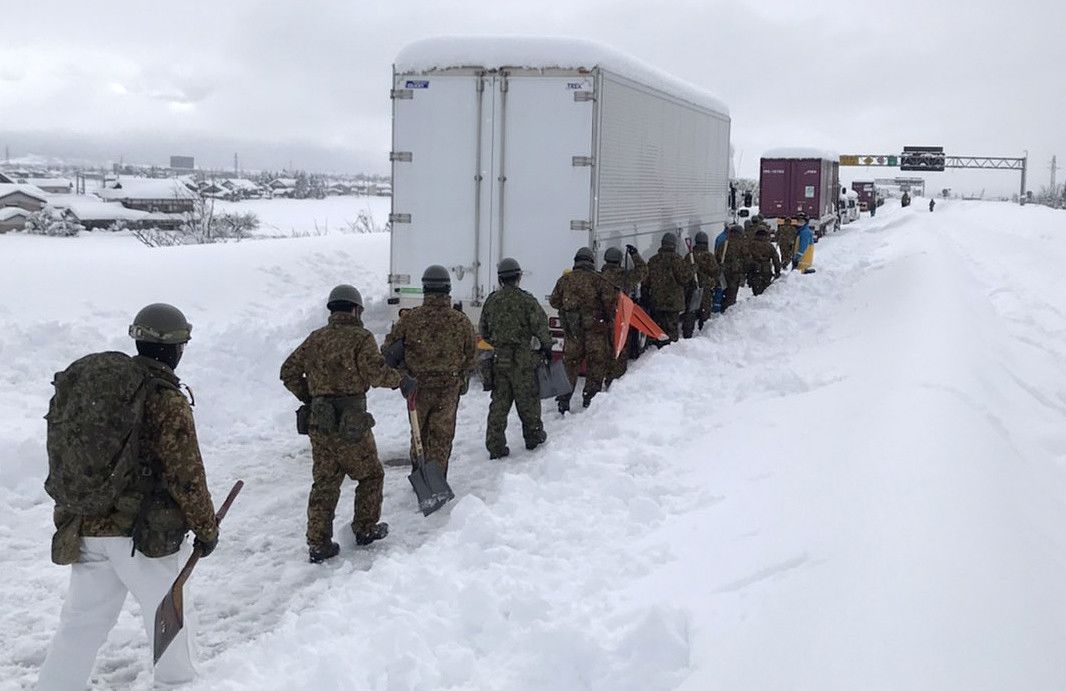 Members of the Self-Defense Forces assist in clearing snow on the Tōkai-Hokuriku Expressway on January 10, 2021. (Courtesy Joint Staff Office, Ministry of Defense; © Jiji)

The Ministry of Health, Labor, and Welfare announces the discovery of a new COVID-19 variant from four passengers on a flight from Brazil.

The government adds the prefectures of Osaka, Kyoto, Hyōgo, Aichi, Gifu, Fukuoka, and Tochigi to the COVID-19 state of emergency from January 14 until February 7.

The Japan Rugby Football Union decides to delay the start of the Top League season, which had been scheduled for January 16, due to more than 60 infections among players and staff.

Violinist Gotō Midori is named as one of the five recipients of the 2020 Kennedy Center Honors for her contributions to US culture through the performing arts. She is the second Japanese recipient after conductor Ozawa Seiji in 2015. 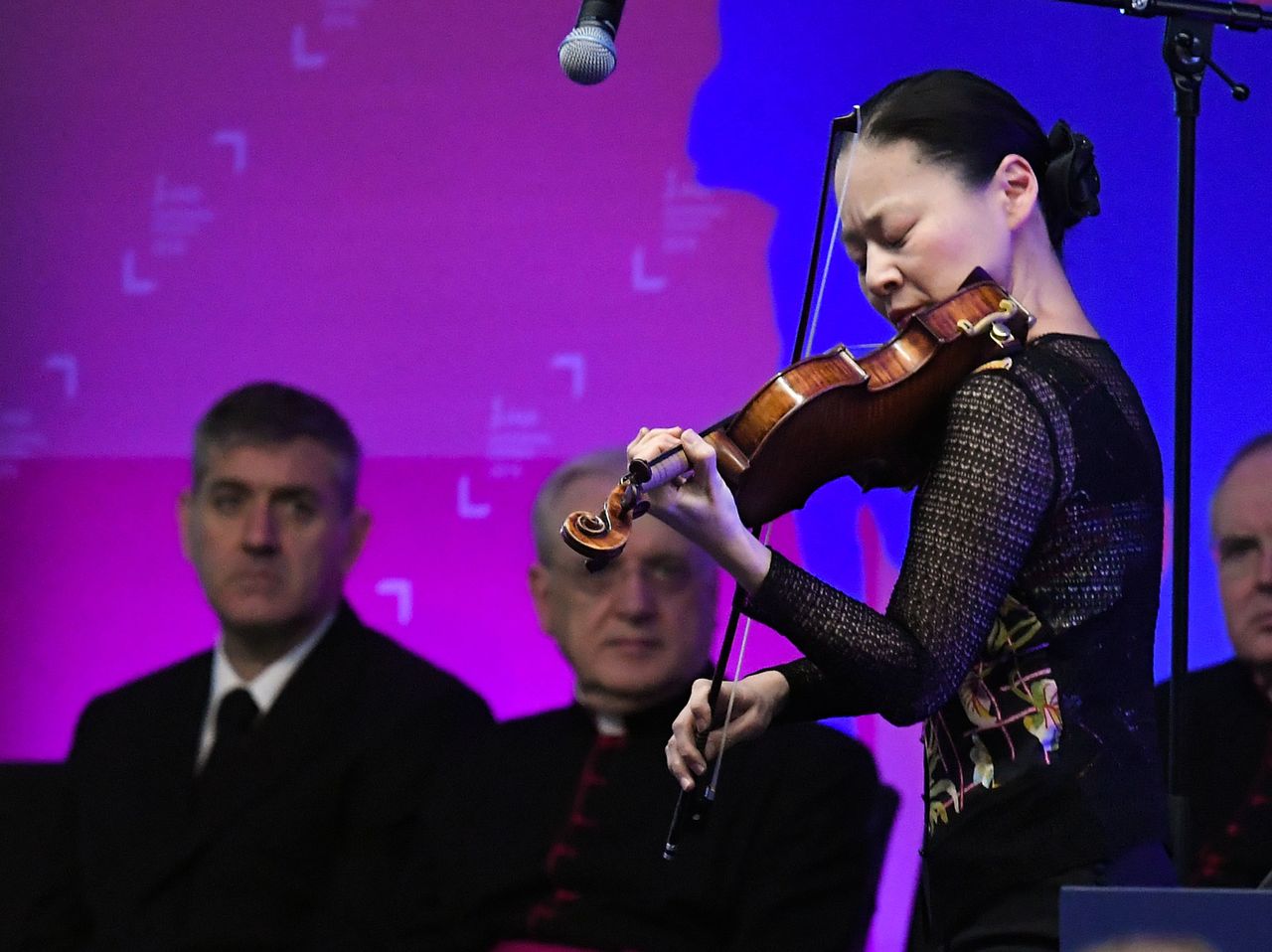 Gotō Midori performs at an International Fund for Agricultural Development meeting in Rome on February 14, 2019. (© AFP/Jiji)

Prime Minister Suga Yoshihide gives a policy speech at the opening of the new Diet session. He says that the government is targeting early enactment of the third supplementary budget for fiscal 2020—which includes measures aimed at offsetting the economic effects of the COVID-19 pandemic—and the budget for fiscal 2021.

Railway operators in the Tokyo area move up their last trains by up to 30 minutes for the duration of the state of emergency. 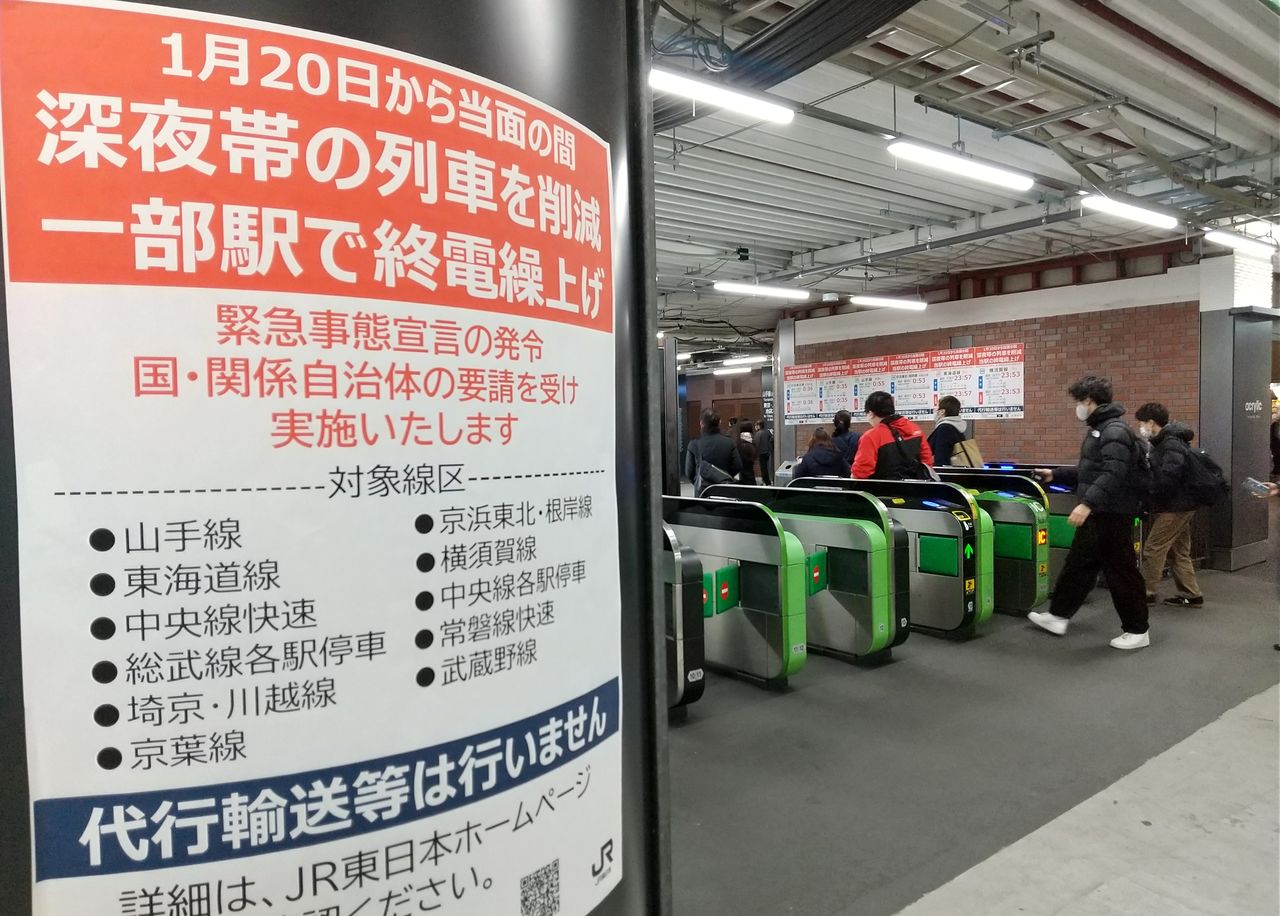 A notice at Shinbashi Station about the early end to daily train services. Picture taken on January 20, 2021. (© Jiji)

Lawmaker Kawai Anri is sentenced to 16 months in prison, suspended for five years, for violations of the Public Offices Election Act during her 2019 House of Councillors election campaign.

The Ministry of Agriculture, Forestry, and Fisheries and Chiba Prefecture report an outbreak of deadly and highly pathogenic bird flu at a duck farm in Yokoshibahikari in the prefecture. It is the first bird flu outbreak involving ducks this season.

The total number of COVID-19 fatalities in Japan (including cruise ship passengers) rises above 5,000 to 5,077.

Prime Minister Suga has a 30-minute telephone conversation with US President Joe Biden in which they agree to strengthen bilateral ties and work closely together to tackle climate change and the COVID-19 pandemic. It is Suga’s first conversation with the new US leader.

After becoming a free agent, pitcher Tanaka Masahiro announces that he will return to the Rakuten Eagles from the New York Yankees.