Walk down the street or ride a train in Japan, and you will often see a heart-shaped keychain bearing the image of a mother and baby dangling from a woman’s bag. Known as a maternity mark, this simple illustration informs others that the bearer is pregnant. Introduced by the Ministry of Health, Labor, and Welfare in 2006 as part of a broader program promoting maternal health, the mark has become a standard symbol for expectant mothers.

A Quiet Way to Ask for Consideration 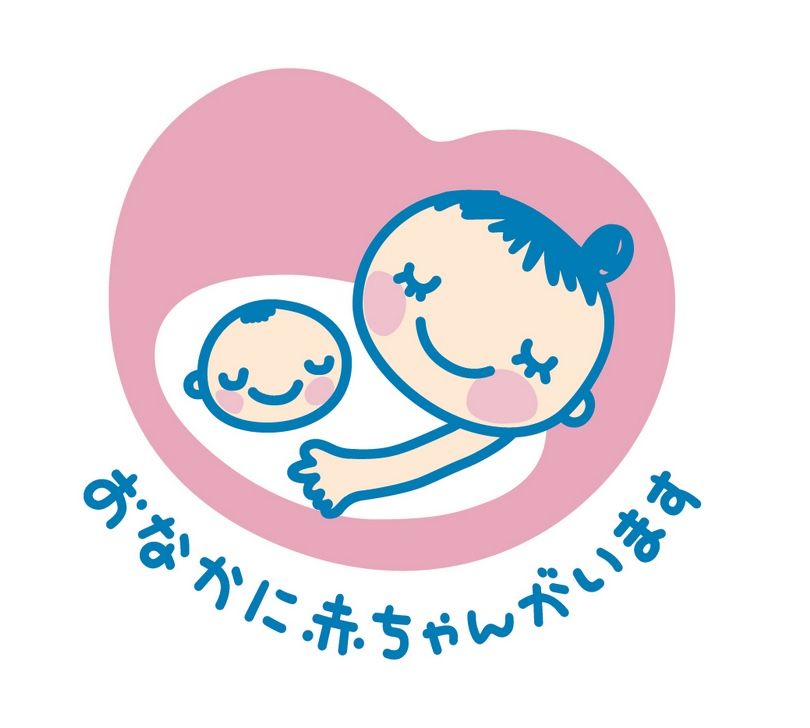 The maternity mark caption reads: “There’s a baby inside me.”

The early months of pregnancy, when a woman’s body is rapidly adapting to the growing needs of the fetus, can be some of the most difficult. Before outward signs of pregnancy even become apparent, shifts in hormone levels and physical changes can bring on sudden bouts of morning sickness and other conditions that wreak havoc on a mother’s constitution. The Health Ministry launched the maternity mark program to raise social awareness of pregnancy and to encourage others to consider the needs of mothers-to-be.

National and regional governments and private organizations have steadily worked to increase recognition of the mark since its inception nearly a decade ago. This has included displaying introductory posters at train stations, restaurants, and other public places. Pins, badges, and similar items printed with the mark are commonly provided at municipal offices to mothers registering for the boshi techō (mother-child health handbook). Related items are also available at some hospitals and clinics, as well as being distributed by maternity groups.

In spite of these efforts, a survey released by the Cabinet Office in September showed public recognition to be lagging. According to the report, just over 60% of women knew what the maternity mark was, while less than half of men did. Some people contend these numbers can in part be explained by the fact that rural residents, who are less reliant on public transportation, have less exposure to the mark.

Usage of the mark by mothers can vary. Typically it is displayed openly on a handbag, with many moms choosing to customize their badges with spangles or stylish straps. Some even choose marks bearing messages, asking people to refrain from smoking close by, for instance. Others take a more reserved approach, pocketing the mark and taking it out only in emergency situations.

While the mark does not enforce an established etiquette, it does encourage people to show consideration by giving up seats on public transportation, refraining from smoking, and lending a hand when needed. Social norms in Japan can make it difficult for some to approach strangers overtly, but the mark serves as a passive way for individuals to respond to a situation without producing undue friction or stress.

One might assume that a program encouraging consideration toward pregnant women would be welcomed with open arms—doubly so in a graying country like Japan, which has one of the world’s lowest birthrates. While the general impression of the maternity mark has largely been positive, with one informal online survey giving it an approval rating of 87%, the Internet has been host to a variety of dissenting voices. 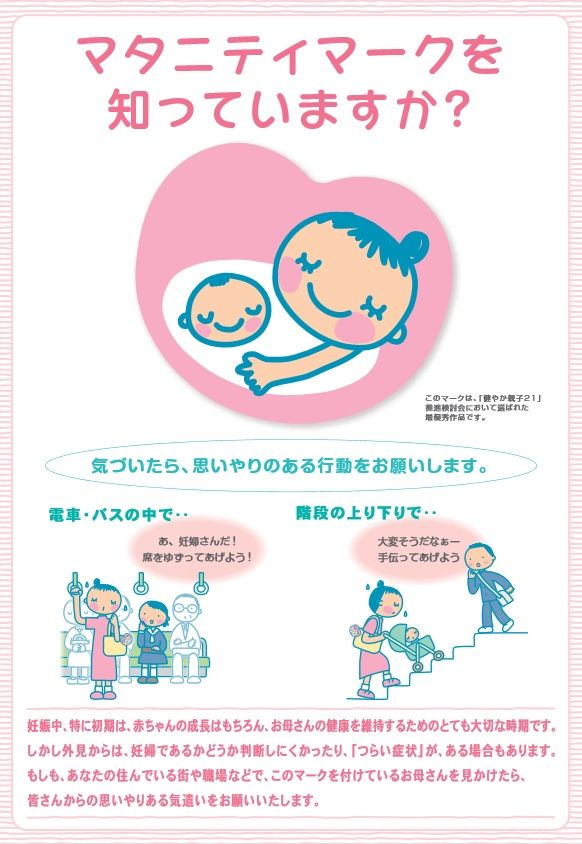 A poster providing information on the maternity mark.

One prominent grievance has been the passive-aggressive nature of the mark, with many considering the pressure to turn over train seats as being tantamount to emotional blackmail. Seats are coveted on public transportation in Japan, which is no surprise in light of the country’s infamously crowded trains and average urban commutes of nearly an hour. Urban legends of imposters using the mark to swindle seats from other passengers have also helped fuel mistrust. In the end, it is up to the individual to decide to give up a seat. And while many do, not everyone is so kind, sadly. Even when they get a seat, some expectant mothers complain of having to endure the occasional belittling comment or derisive look that can accompany these acts of charity.

Another objection to the mark has been that it advertises the bearer’s pregnancy in an unduly public manner. The trend by Japanese women to postpone having children until later in life has meant that a significant number of people must rely on long and arduous regimens of fertility treatment to have a baby. Some detractors think the mark inadequately considers the feelings of these women, as well as those who have found they are unable to bear children.

Ultimately, though, debate benefits the maternity mark by broadening understanding of its use and meaning. It seems likely that negative sentiments will eventually subside as familiarity with the program grows. Active promotion of the mark by organizations like the Himawari no Kai (Sunflower Association) is contributing to greater acceptance by keeping the mark in the public eye.

Taking into account the challenges facing women in Japan, many proponents feel the maternity mark has the potential to aid the country’s efforts to boost the birthrate by providing women peace of mind. Rather than as a means of getting a seat on the train, it may be most valuable as a symbol that society supports their decision to have children.