The United Kingdom’s Prince William—the Duke of Cambridge, second in line to his country’s throne—was in Japan from February 26 to March 1 on a whistle-stop tour that was equal parts tradition and technology, celebrities and civilians.

Following in His Parents’ Footsteps

It was a state visit that for many sparked memories of another nearly 30 years ago, when William’s parents Charles and Diana, then Prince and Princess of Wales, came to the country for five days of pomp and pressing the flesh in 1986.

Japan at that time was heading confidently into the half decade of inflated asset prices that became known as the bubble years. The royal visit whipped the nation’s prosperous consumers into a “Diana Fever,” with magazines detailing Diana’s fashion and lifestyle secrets. Souvenirs including the then-ubiquitous commemorative telephone cards flew off the shelves.

The immediate economic impact of Prince William’s trip may not have been quite so spectacular, perhaps in part because his own glamorous consort—the pregnant Catherine, Duchess of Cambridge—was unable to undertake the long-haul flights to accompany him on his week-long tour of Japan and China. It is nonetheless hoped that the prince’s endorsement of a range of initiatives may help to spur future development in a variety of areas, not only in terms of technological and economic collaboration between the UK and Japan, but also in northern areas still striving to recover from the 2011 Great East Japan Earthquake.

After his arrival at Tokyo’s Haneda Airport, the whirlwind of activity began as William was transported by speedboat to Tokyo Bay, accompanied by Tokyo Governor Masuzoe Yōichi on a tour of sites earmarked as venues for the Tokyo Olympics to be held in 2020. In 2005, the prince himself served alongside soccer icon David Beckham as one of Britain’s ambassadors in its bid to secure the 2012 games for London, and Japanese officials seem keen to benefit from his nation’s Olympic expertise. This was followed by a traditional tea ceremony in the teahouse of Tokyo’s Hama-rikyū Gardens, performed by the same master who had welcomed William’s parents almost 30 years before.

The next day, a journey to pay his respects at the Commonwealth War Graves in Yokohama, visited by Lady Diana in 1995, was followed by a luncheon with Emperor Akihito and Empress Michiko. There are many parallels to be drawn between the ancient monarchies of Japan and Britain, but some local observers have bemoaned how detached from everyday affairs Japan’s royals are compared to the go-getting, approachable William. There may also be those within the imperial palace who view the House of Windsor’s abundance of male heirs with more than a touch of yearning. Japan’s royal family, the world’s oldest continuous monarchy, with verifiable roots stretching back to at least the sixth century, currently faces a crisis in numbers. 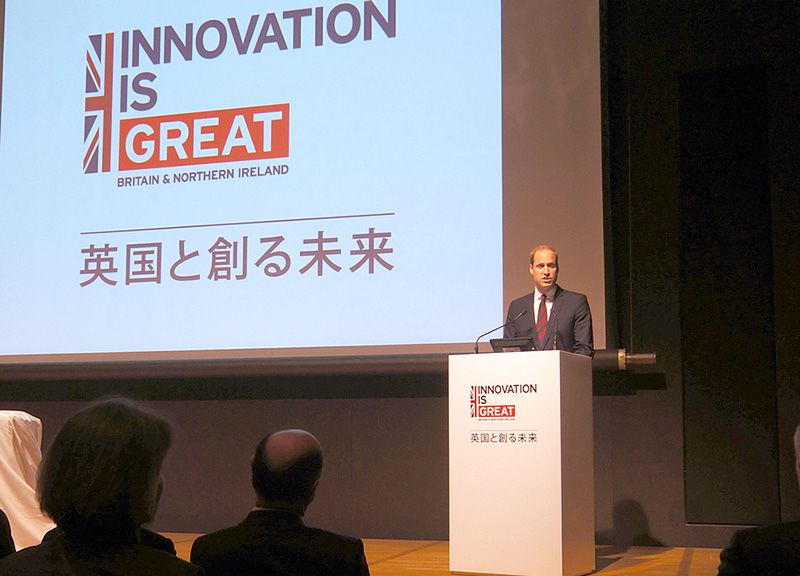 Prince William kicks off the “Innovation is GREAT” program at a February 27 event.

Several subsequent engagements were aimed at promoting the British Government’s “Innovation is GREAT” campaign, a yearlong program aimed at building both business and social partnerships between the UK and Japan. On Friday afternoon, the prince made an appearance at Tokyo’s Roppongi Hills to give a short speech at the scheme’s opening event.

Speakers who raised topics of particular relevance to Japan included the roboticist Geoff Pegman, who introduced British company ImiTec’s AARM unmanned radiation-monitoring helidrone; Sir Nigel Shadbolt, a “big data” expert who chided Japan for its comparative lack of open access to data, including that relating to open governance; and Oxford University Vice Chancellor Andrew Hamilton, who strayed from the afternoon’s predominant theme of technology to stress the economic importance of innovative use of humanities research to enhance the experience of visitors to historical sites. The prince’s appearance was a brief one. After a quick turn on the podium, he joined astronaut Noguchi Sōichi and Aston Martin CEO Andy Palmer in the traditional kagami biraki, the ceremonial breaking open of a large cask of sake to signify the start of the campaign, before being escorted backstage. 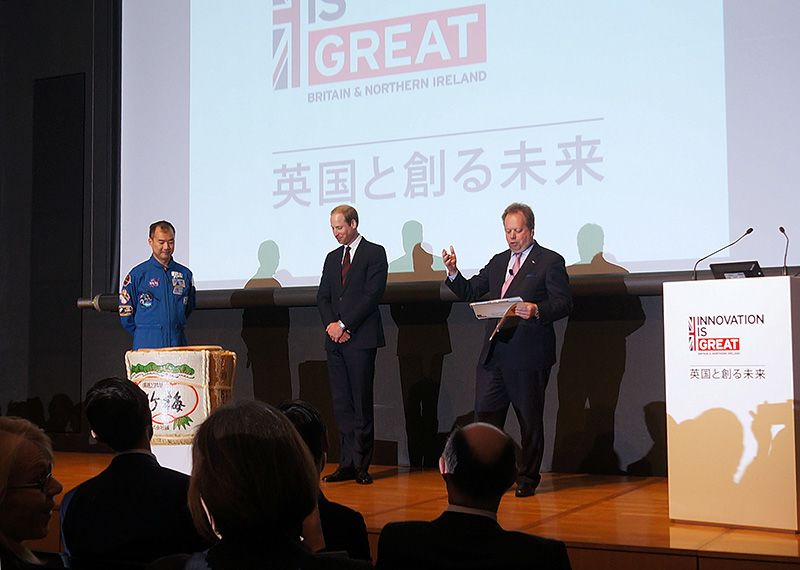 The prince is ready to crack the sake cask as Andy Palmer (right) speaks and Noguchi Sōichi (left) looks on. 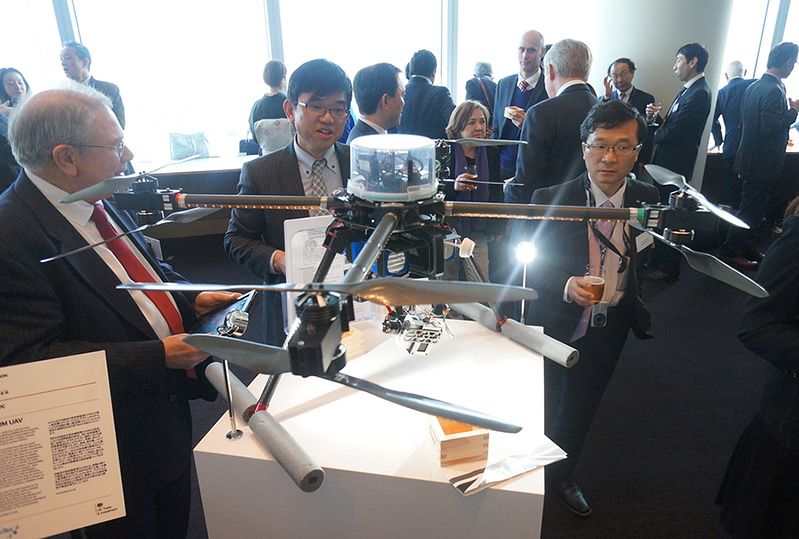 A trip to the campaign’s tie-in exhibition in the upmarket Daikanyama district was followed by a tour of the studios of national broadcaster NHK. Questions had been raised in some quarters as to whether it was appropriate for the visiting royal to appear to endorse a once-proud institution that some believe has lost its way in recent years, but William kept things light, joking with station mascot Domo-kun and donning a replica of the armor of Warring States Period (1467–1568) warlord Toyotomi Hideyoshi (1537–98) on the set of the recently commenced historical drama Hana moyu (Burning Flower). He then met a host of local celebrities, including Mongolian sumō wrestler Harumafuji, at a reception at the residence of British Ambassador Tim Hitchens before heading north to join Prime Minister Abe Shinzō in Kōriyama, Fukushima Prefecture.

The city of Kōriyama is due east of the infamous Fukushima Daiichi Nuclear Power Plant. The prince visited an athletic facility built to give local children the chance to exercise without exposing themselves to the outdoor radiation stemming from the nuclear disaster that followed the earthquake and tsunami of March 11, 2011.

Some expressed concern that Prime Minister Abe was exploiting the royal visit to present an illusion of the region’s recovery to the world’s press while ignoring nearby towns that are still struggling and whitewashing persisting fears of radioactive contamination. The clear gratitude, though, of the Tōhoku residents suggested that the prince’s presence in the disaster-hit regions was worthwhile. The coastal city of Ishinomaki, Miyagi Prefecture, was all but washed off the map on 3/11, with over 3,000 lives lost and some 22,000 left homeless. There Prince William laid a bouquet on a hillside overlooking the razed seaside district and bowed his head in prayer for those lost.

Hideyoshi unified Japan through sometimes brutal means. On this trip, Prince William displayed his own, more gentle, knack for bringing people together. What are the chances that it could prove so infectious as to spark an upturn in relations between Japan and the prince’s next destination, China? 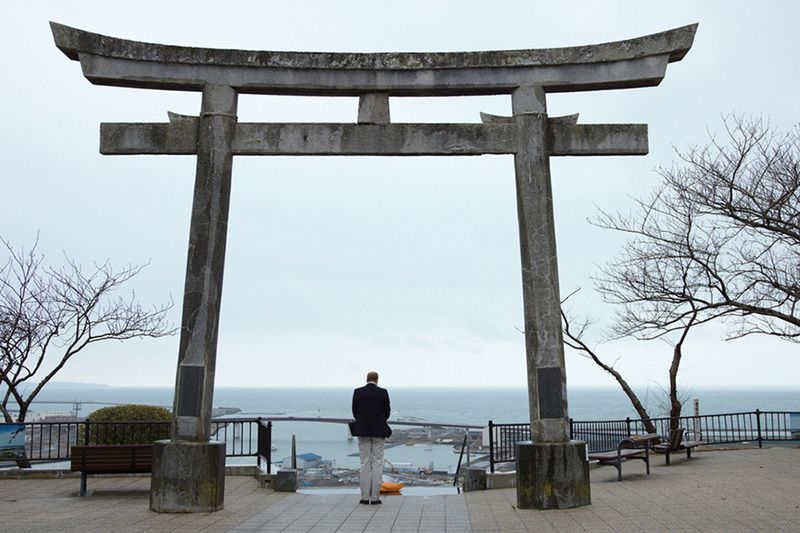