Japan’s latest publishing sensation is a godsend for parents fretting over how to get their children focused on learning kanji. Unko kanji doriru (Poop Kanji Drills) applies a mountain of excrement to the problem with over 3,000 example sentences featuring the word unko (poop). The elementary school student’s fascination with the smelly theme has propelled the six-book series (one for each elementary grade) to the top six places in Amazon Japan’s Japanese language learning chart.

Leaving aside their obsession with the brown stuff, the books follow a standard pattern, covering all of the more than 1,000 characters studied at elementary school. The kanji are arranged in an order created by learning specialists, grouped thematically for more effective memorization. Each character has a presentation of its stroke order and sentences that highlight the different readings. There are also tips along the way from the helpful Unko-sensei. The character’s head forms the distinctive whirled shape associated with poop in Japan, which has been popularized worldwide via emoji. 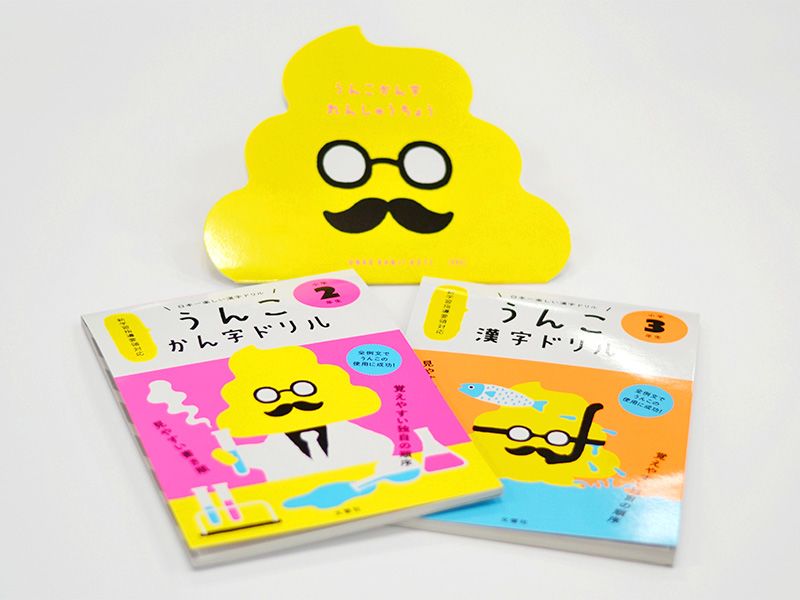 Unko-sensei guides learners through all six of the books, as well as providing the shape for the character-practice notebook that comes with some volumes.

Some of the example sentences remain confined to the smallest room. “No matter how many times I flushed, my poop wouldn’t flush away” (ぼくのうんこは何回流しても流れなかった) (in the entry for the character 何, second grade). Others are more unlikely: “This is the national treasure woodblock print Fuji and Poop and a Crane” (こちらが国宝の版画「富士とうんことつる」です) (版, fifth grade). And some are surreal: “A German doctor of engineering invented a machine that can talk to poop” (ドイツの工学博士が、うんこと話せる機械を発明した) (博, fourth grade).

The Tokyo-based Japanese language teacher Suzuki Akiko bought the first-grade book for her son to review during the spring vacation before he entered second grade. “I think motivation is crucial for students of all ages,” she told Nippon.com, “so it was good to see him laughing while he studied. There is not as much content as in standard kanji teaching materials, but as it’s an endless succession of poop, I also thought that this was plenty.”

The series sold over 280,000 copies in the first week after it was launched in mid-March. Its combination of education and toilet humor has proved a winning one. Foreign learners struggling with hundreds of unfamiliar characters may also enjoy the novel approach to kanji study.